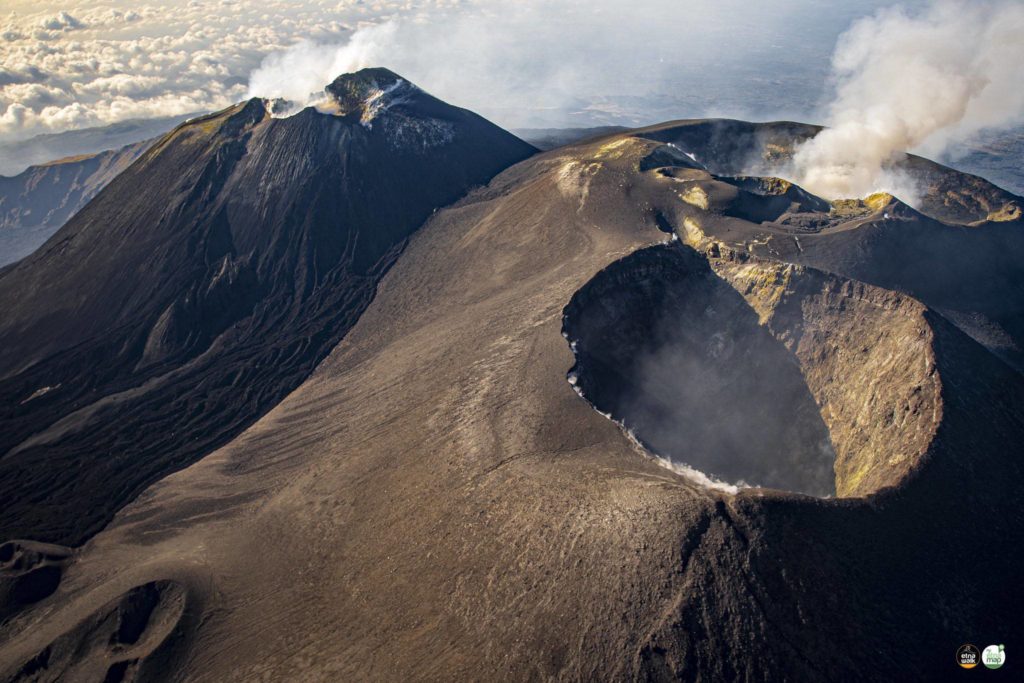 4) DEFORMATIONS OF THE SOIL: The data of the deformations of the permanent networks confirm the persistence of a state of inflation of the volcanic edifice.
5) GEOCHEMISTRY: SO2 flux at an average level
Soil CO2 flux shows average values.
The partial pressure of dissolved CO2 in groundwater shows values ​​in seasonal variability.
The Helium isotope ratio data relating to the campaign of 10-13-2022 show an increase compared to the previous ones, settling at a high level.
6) SATELLITE OBSERVATIONS: The thermal activity observed by satellite in the summit area was weak.

VOLCANOLOGICAL OBSERVATIONS
The follow-up of the volcanic activity of Etna, during the observation period in question, was carried out by analyzing the images of the network of surveillance cameras of the INGV, Osservatorio Etneo (INGV-OE) and at through various inspections in the summit area carried out by INGV-OE staff on October 6, 21, 28 and 30. 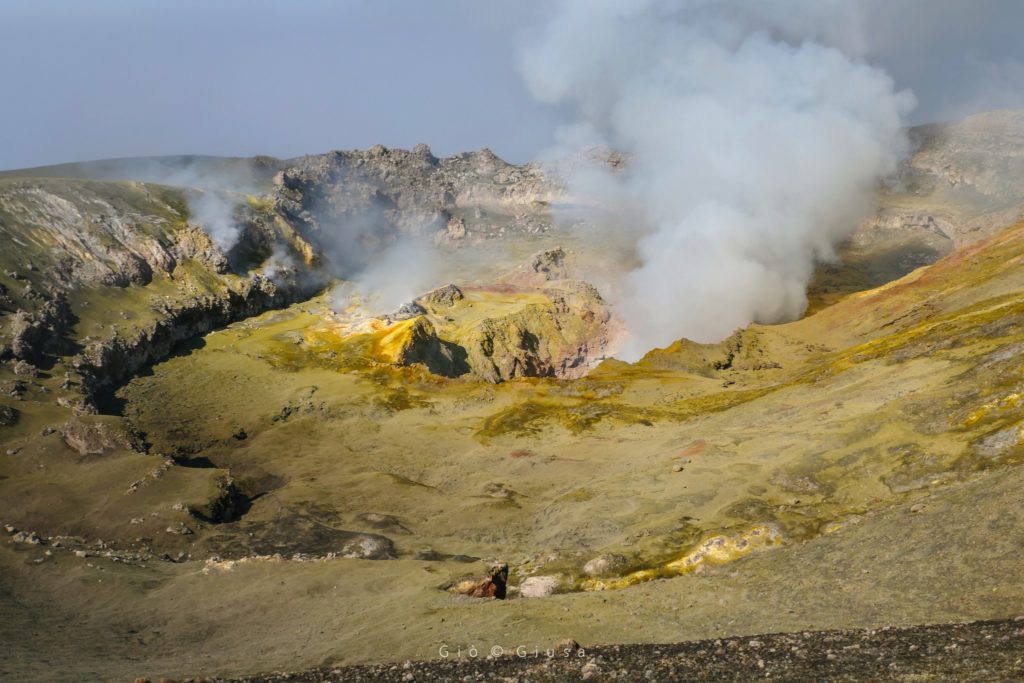 During the period under review, the activity of Etna showed no change compared to that observed in the previous months, and was characterized by a variable rate degassing of the summit craters. In particular, the Bocca Nuova (BN) crater was characterized by variable degassing. During sightings by INGV-OE personnel, rumblings coming from BN-1 and BN-2 were clearly audible. In addition, during observations also carried out with the help of thermal cameras, no launch of pyroclastic products was observed outside the active vents. The bottoms of the Voragine and Northeast Craters, as in previous months, are clogged and show only weak fumarolic activity. 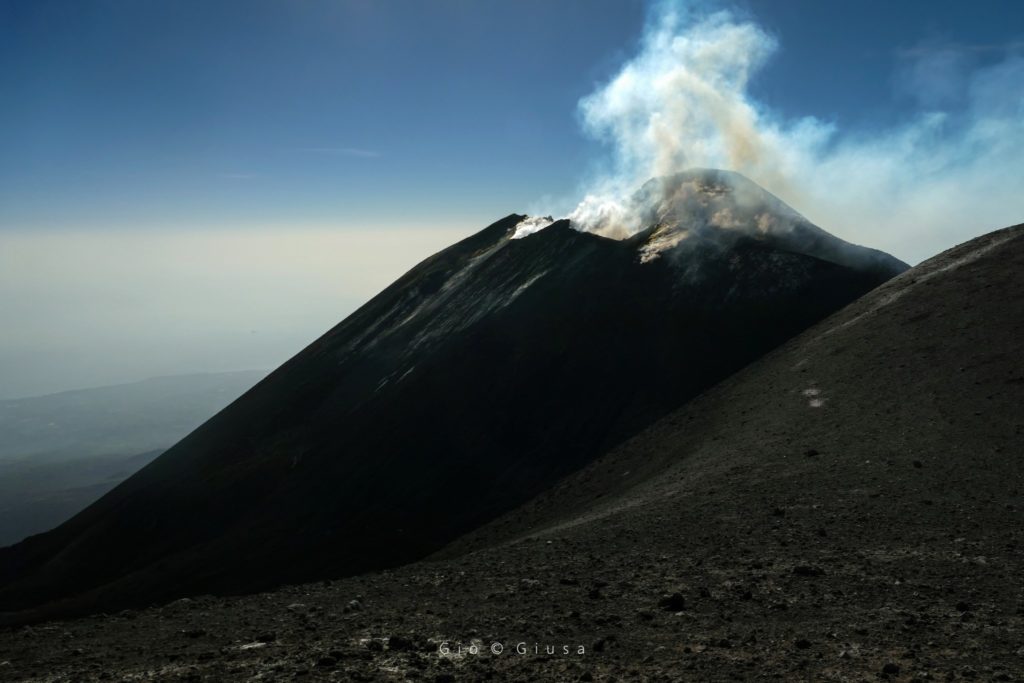 Finally, the Southeast crater was characterized by low degassing activity and mainly, as observed during inspections, by fumarolic activity. During the inspection carried out on October 23 by INGV-OE staff using the drone, it was also observed that the Southeast crater presents moderate thermal anomalies in the vicinity of a few fractures located on the slope. Upper South.

The amplitude of the tremor was generally medium, sometimes touching the high end. The sources of the signal are located under the central craters, at a level of about 2.5 to 3 km above sea level.

In the light of the surveillance data, it is highlighted:
1) VOLCANOLOGICAL OBSERVATIONS: During this period, normal Strombolian-type explosive activity was observed with spattering activity in the North Crater area. The total hourly frequency oscillated between low (3 events/h) and medium-low (7 events/h) ). The intensity of the explosions was low to high in the North Crater area and low to medium in the South Central Crater area.
2) SEISMOLOGY: The seismological parameters do not show significant variations.
3) GROUND DEFORMATIONS: There are no significant variations in the time series of the tilt and GNSS stations
4) GEOCHEMISTRY: Total flux of SO2 at an average and decreasing level
CO2 fluxes in the crater area are at medium to high values.
The C/S ratio in the plume is at medium-high values ​​(C/S = 9.6).
There are no updates on the isotope ratio of helium in groundwater.
5) SATELLITE OBSERVATIONS: The thermal activity observed by satellite in the summit area was weak. 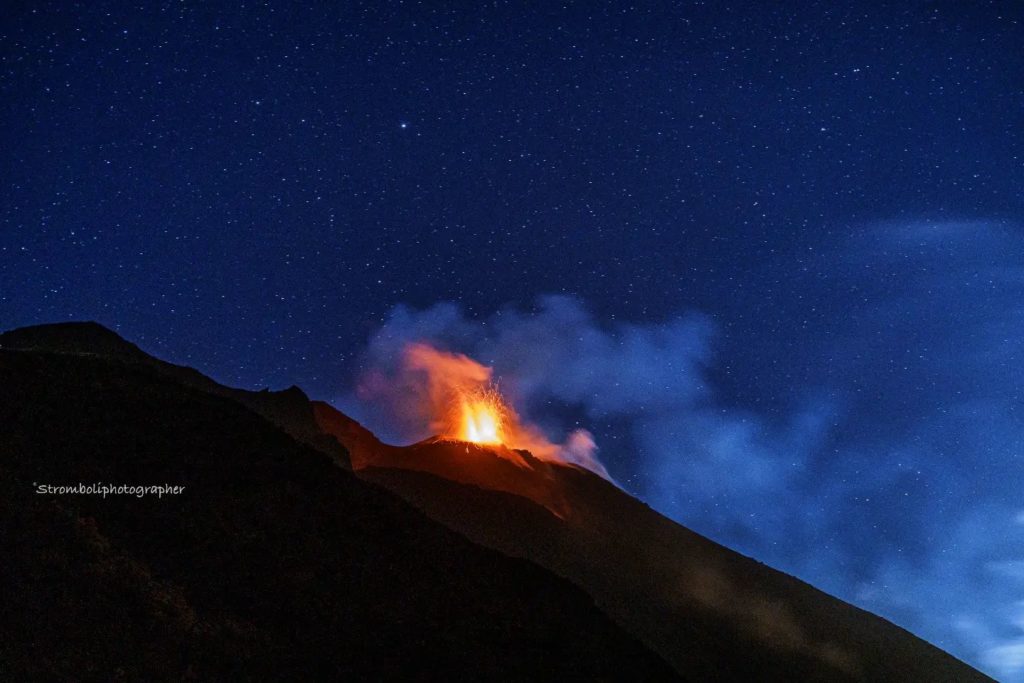 VOLCANOLOGICAL OBSERVATIONS
In the period under observation, the eruptive activity of Stromboli was characterized by the analysis of the images recorded by the surveillance cameras of the INGV-OE at an altitude of 190 m (SCT-SCV), Punta dei Corvi and Pizzo the latter restored on October 25, while the camera altitude 400 m due to video signal acquisition problems caused by damage to the optical fiber connecting Punta Labronzo and COA due to the bad weather that hit the island on August 12, 2022, is currently not available. The explosive activity was mainly produced by 4 (four) eruptive vents located in the North crater area and by 2 (two) vents located in the Center-South area. All the mouths are located inside the depression which occupies the terrace of the crater. 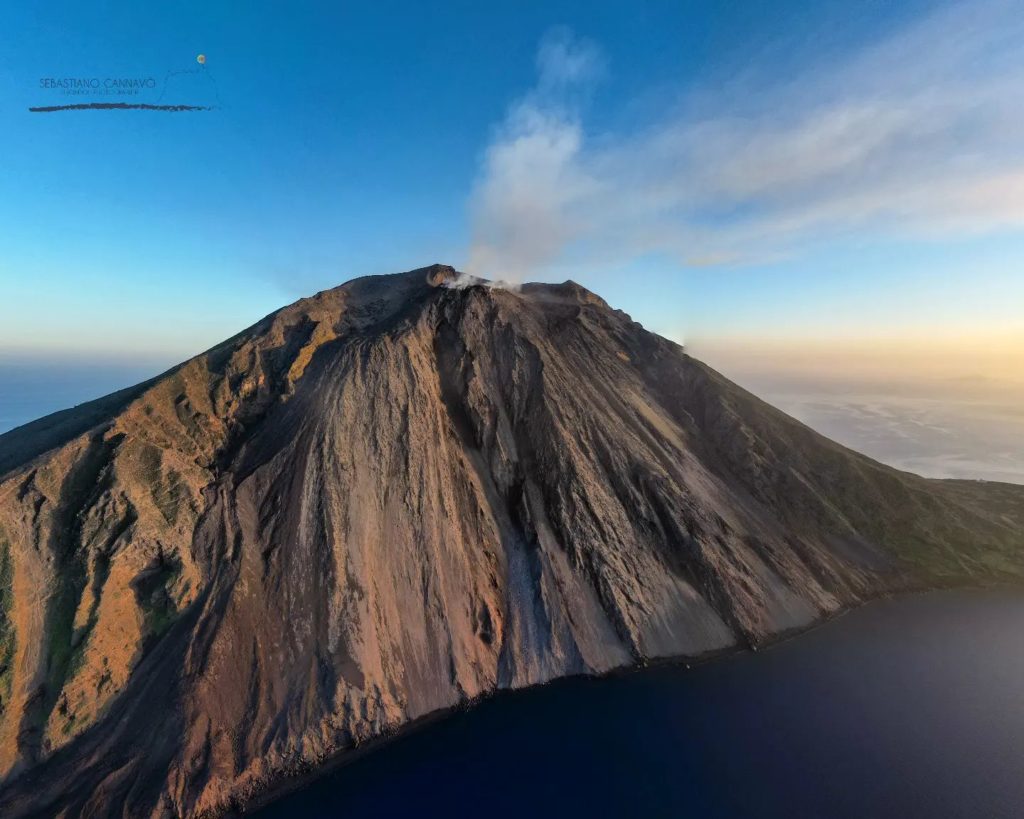 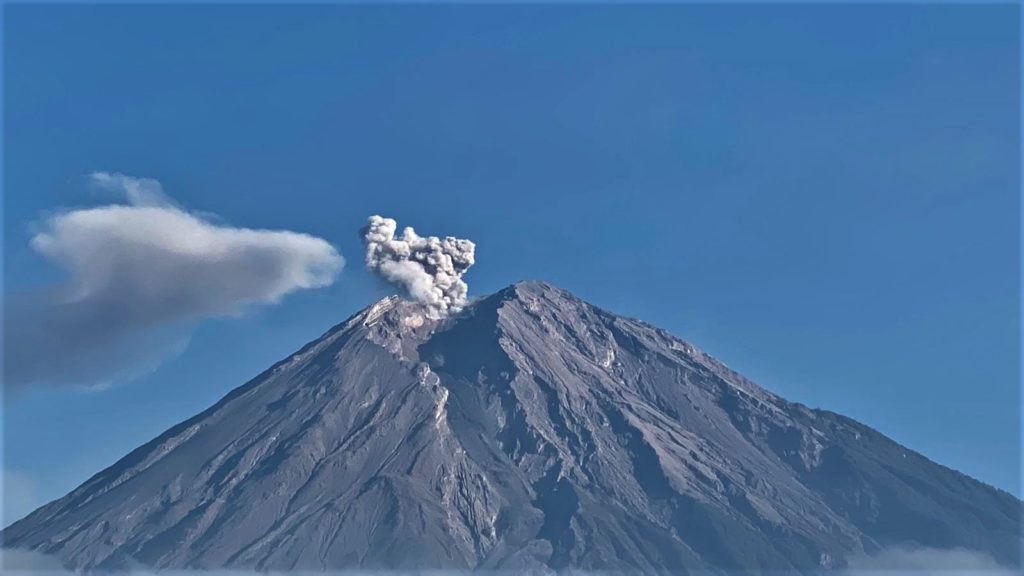 Volcanic Cloud Height :
Best estimate of ash-cloud top is around 960 FT (300 M) above sea level, may be higher than what can be observed clearly. Source of height data: ground observer.

JMA reported ongoing eruptive activity at Minamidake Crater (at Aira Caldera’s Sakurajima volcano) and nighttime crater incandescence. Two eruptive events and one explosion were recorded during 24-28 October. Volcanic plumes rose as high as 1.2 km above the crater rim and large blocks were ejected as far as 1.3 km from the vent. Very small eruptive events were occasionally recorded during 28-31 October. The Alert Level remained at 3 (on a 5-level scale), and residents were warned to stay 2 km away from the crater. 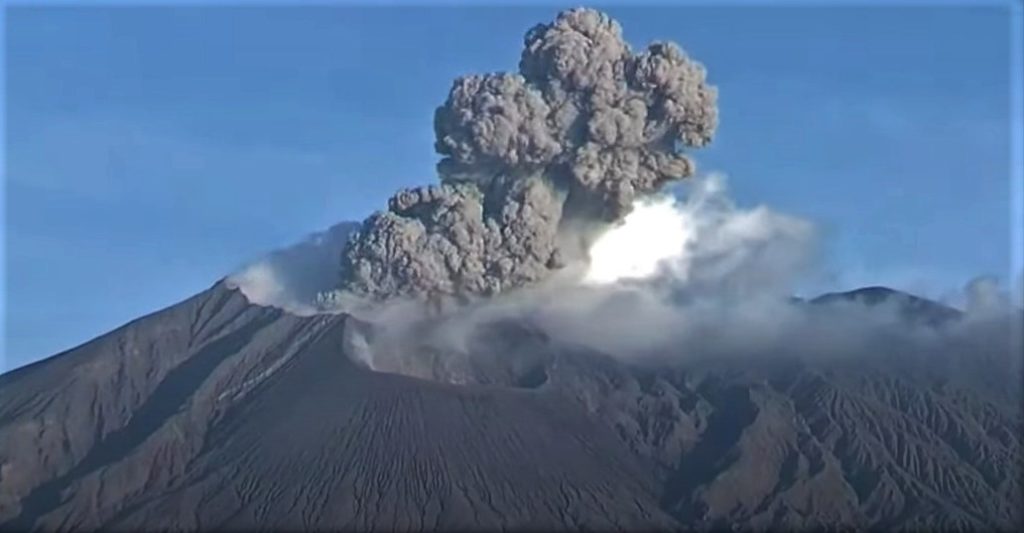 The Darwin VAAC reported that during 31 October-1 November ash plumes from Bagana rose to 2.1-2.7 km (7,000-9,000 ft) a.s.l. and drifted NE, N, and WSW based on satellite data. An intense thermal anomaly was present at the summit. 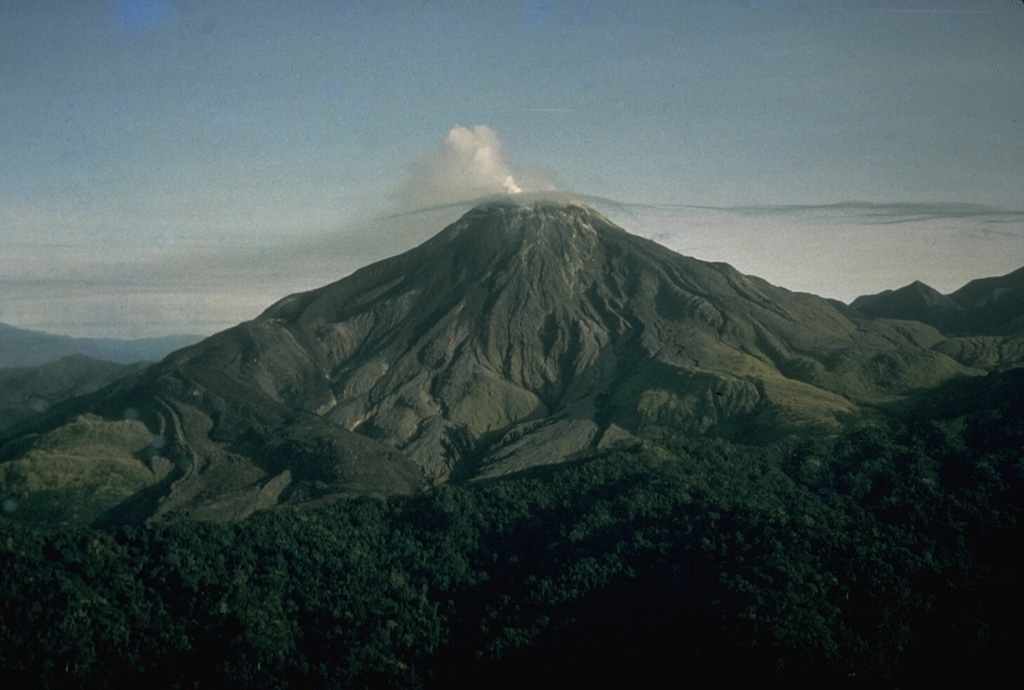 Bagana volcano, occupying a remote portion of central Bougainville Island, is one of Melanesia’s youngest and most active volcanoes. This massive symmetrical cone was largely constructed by an accumulation of viscous andesitic lava flows. The entire edifice could have been constructed in about 300 years at its present rate of lava production. Eruptive activity is frequent and characterized by non-explosive effusion of viscous lava that maintains a small lava dome in the summit crater, although explosive activity occasionally producing pyroclastic flows also occurs. Lava flows form dramatic, freshly preserved tongue-shaped lobes up to 50 m thick with prominent levees that descend the flanks on all sides. 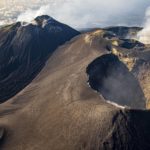 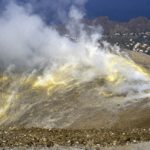