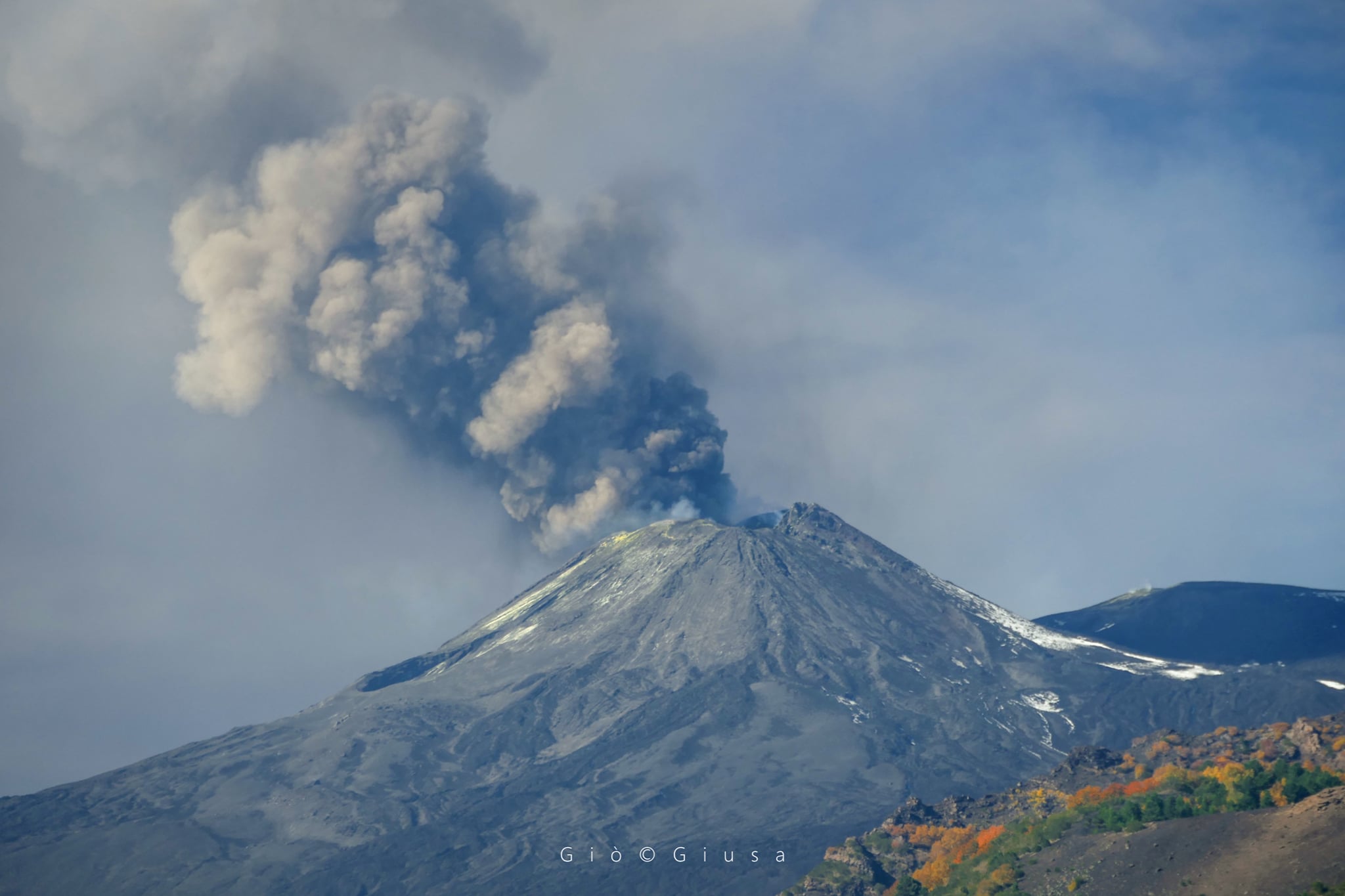 1) VOLCANOLOGICAL OBSERVATIONS: Normal explosive volcanic activity of Strombolian type on low and medium-low levels (3-9 events / h) and medium-high intensity in the area of the North crater and medium in the area of the Center South crater.
2) SEISMOLOGY: The seismological parameters do not show significant variations.
4) DEFORMATIONS: The island’s soil deformation monitoring networks did not show any significant changes to report for the period under review.

5) GEOCHEMISTRY: medium-low SO2 flow There are no updates on the soil CO2 flux data. C / S Ratio – Latest values (C / S = 7.9) are average levels. Helium isotope ratio – The last measurements (10/22/2020) are on average values and without significant changes.
6) SATELLITE OBSERVATIONS: The thermal activity in the summit area is at a low level.

VOLCANOLOGICAL OBSERVATIONS.
In the period under observation, the eruptive activity of Stromboli was characterized by the analysis of the images recorded by the surveillance cameras INGV-OE located at 190 m, Punta dei Corvi and 400 m. 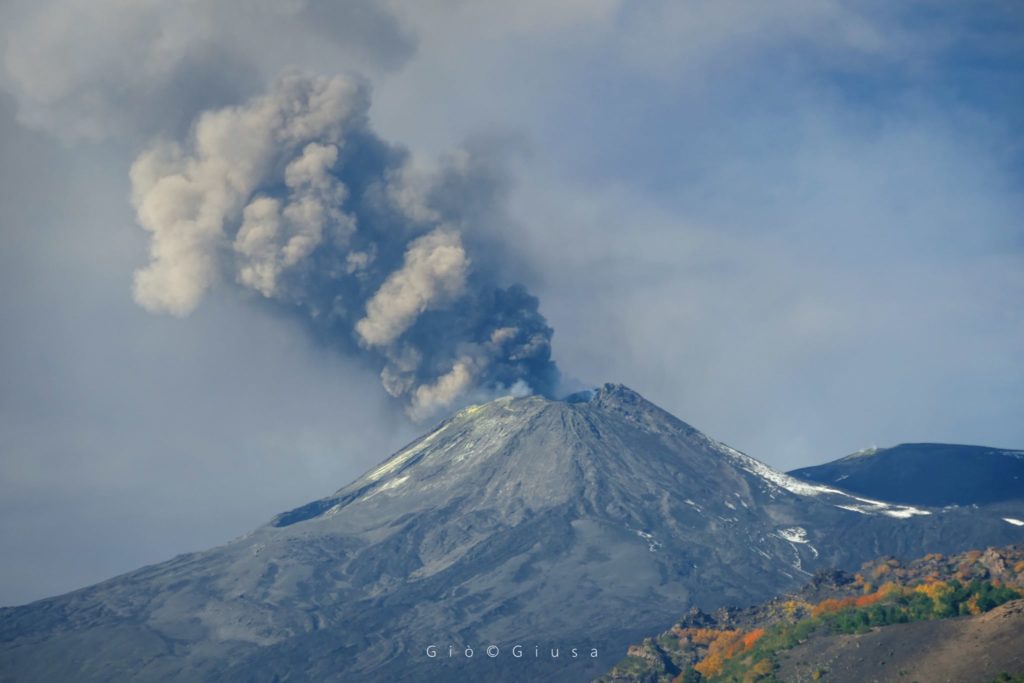 The « Saddle Mouth » of the New Southeast Crater with its plume of ash. This phenomenon can be due to the magma which rises from time to time, but also to collapses.

2) SEISMOLOGY: modest fracturing seismic activity; amplitude of the tremor at the average level
3) INFRASON: moderate infrasound activity.
4) DEFORMATIONS: Etna soil deformation monitoring networks have not shown any significant changes over the past week.
5) GEOCHEMISTRY: The flow of SO2 is at a medium-low level HCl flow occurs at an average level. Soil CO2 flux is at low degassing levels. The partial pressure of dissolved CO2 does not show significant changes. The value of the C / S ratio is at medium-low levels (last measurement available on 10/16/2020). The isotopic ratio of helium is at average values ​​(last update 14/10/2020).
6) SATELLITE OBSERVATIONS: The thermal activity in the summit area is at a medium-low level. 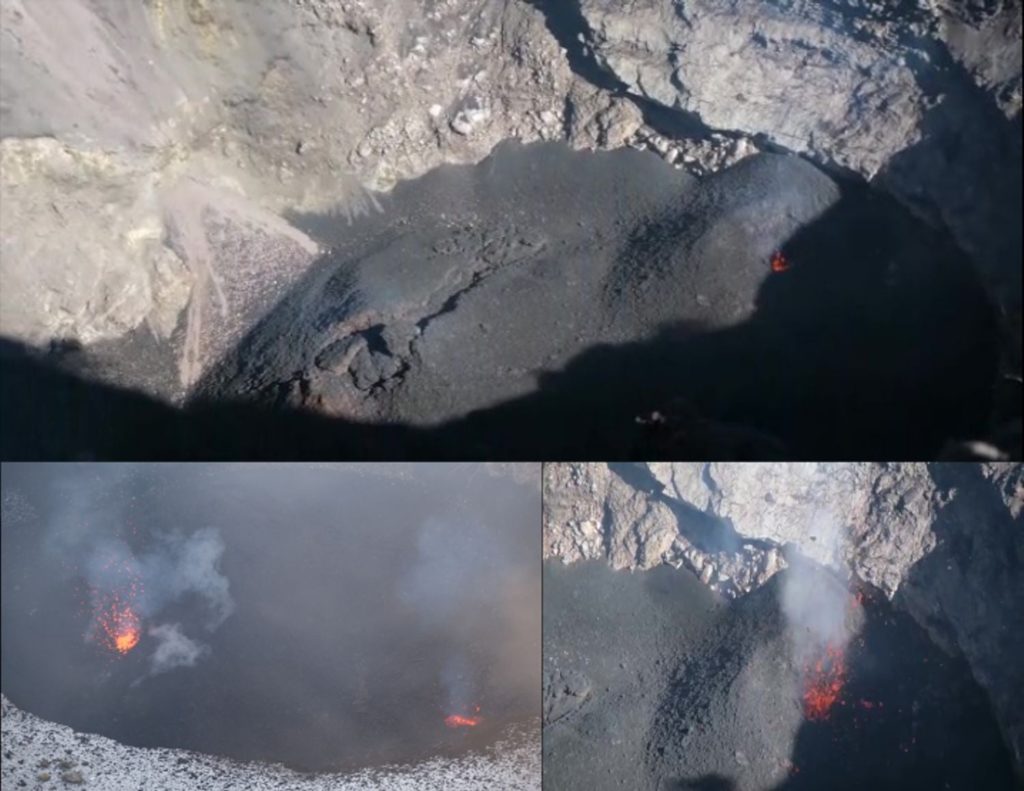 Images taken from the edge of the northeast crater, where it is possible to observe the Strombolian activity produced by the cinder cones.

The monitoring of the volcanic activity at the level of the summit craters of Etna, during the week in question, was carried out by analyzing the images of the network of surveillance cameras of the INGV section of Catania, Osservatorio Etneo (INGV- OE), and various inspections carried out in the summit crater area by INGV staff. Strombolian activity at the New Southeast Crater (NSEC) was variable in intensity with discontinuous ash emissions and the launching of lava shreds. At the Northeast Crater (NEC), intracrater surface Strombolian activity persisted with the formation of small lava flows confined near the scoria cones, clearly visible from the crater rim, the products of this activity remain confined in the crater. The Bocca Nuova was characterized by a phenomenon of small intracrater collapses and a consequent emission of fine ash which indicates the beginning of the craterization of the eastern part, finally the crater of the Voragine showed occasional explosive activity with the launch of products on the crater rim.

Volcanic tremor: The average amplitude of the volcanic tremor, during the week in question, showed gradual and sometimes significant fluctuations which globally identify a stationary trend in the range of average values. The source of the tremort was located in the New Southeast Crater area, at a depth of about 2800-3000 m above mean sea level.

The seismicity generated by rock fracturing increased in the number of earthquakes and decreased in the seismic energy released, compared to the previous week. This seismic activity was localized mainly in certain sectors of the volcanic structure and in the Arenas crater, at depths ranging from 0.2 to 6.9 km. The highest magnitude recorded during the week was 0.6 ML (local magnitude), corresponding to the earthquake that occurred on October 27 at 9:23 p.m. local time, located 3.2 km to the South from the Arenas crater, 3.5 km deep. An increase in seismicity of this type recorded between October 28 and 29, 3.8 km east of the Arenas crater, at depths between 2.4 and 5.5 km can be seen; The most significant earthquake, during the increase, was recorded on October 28 at 17:37 (local time) with a local magnitude of 0.5 ML (local magnitude).

During the week, several episodes of low energy « drumbeat » type seismicity associated with rock fracturing were recorded. The seismicity linked to the dynamics of the fluids, inside the volcanic conduits, slightly decreased in the number of events and in the seismic energy released, compared to the previous week. This seismic activity was characterized by the occurrence of continuous volcanic tremor, tremor pulses, long and very long period type earthquakes, which presented variable energy levels and spectral content. Some of these signals were associated with gas and ash emissions, confirmed by cameras installed on the volcano.

Over the past week, web portals MIROVA and Nasa Firms reported low-energy thermal anomalies over the volcano.

Around 520 earthquakes were located by the IMO¿s automatic SIL seismic network in the passing week, considerably fewer than the previous week when more than 3700 earthquakes occured during a seismic swarm in the Reykjanes peninsula after a M5.6 the 20th of October. 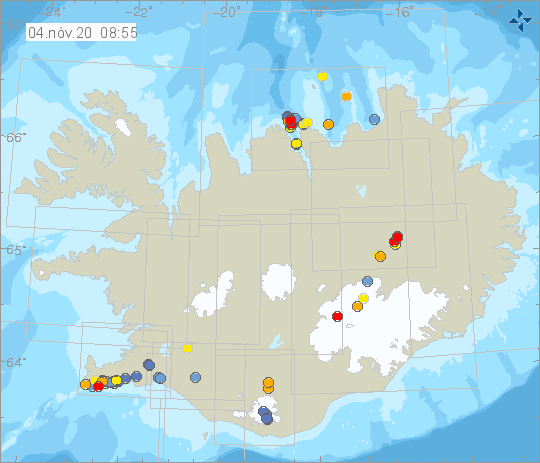 Around half of the earthquakes this week occured in the Reykjanes peninsula, amounting to around 270. The largest earthquake of the week was a M3.0 just 30 km NNE of Siglufjörður the 31st of October at 04:55. Six earthquakes were located in Hekla, the largest a M1.2 the 30th of October. 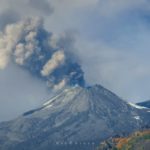