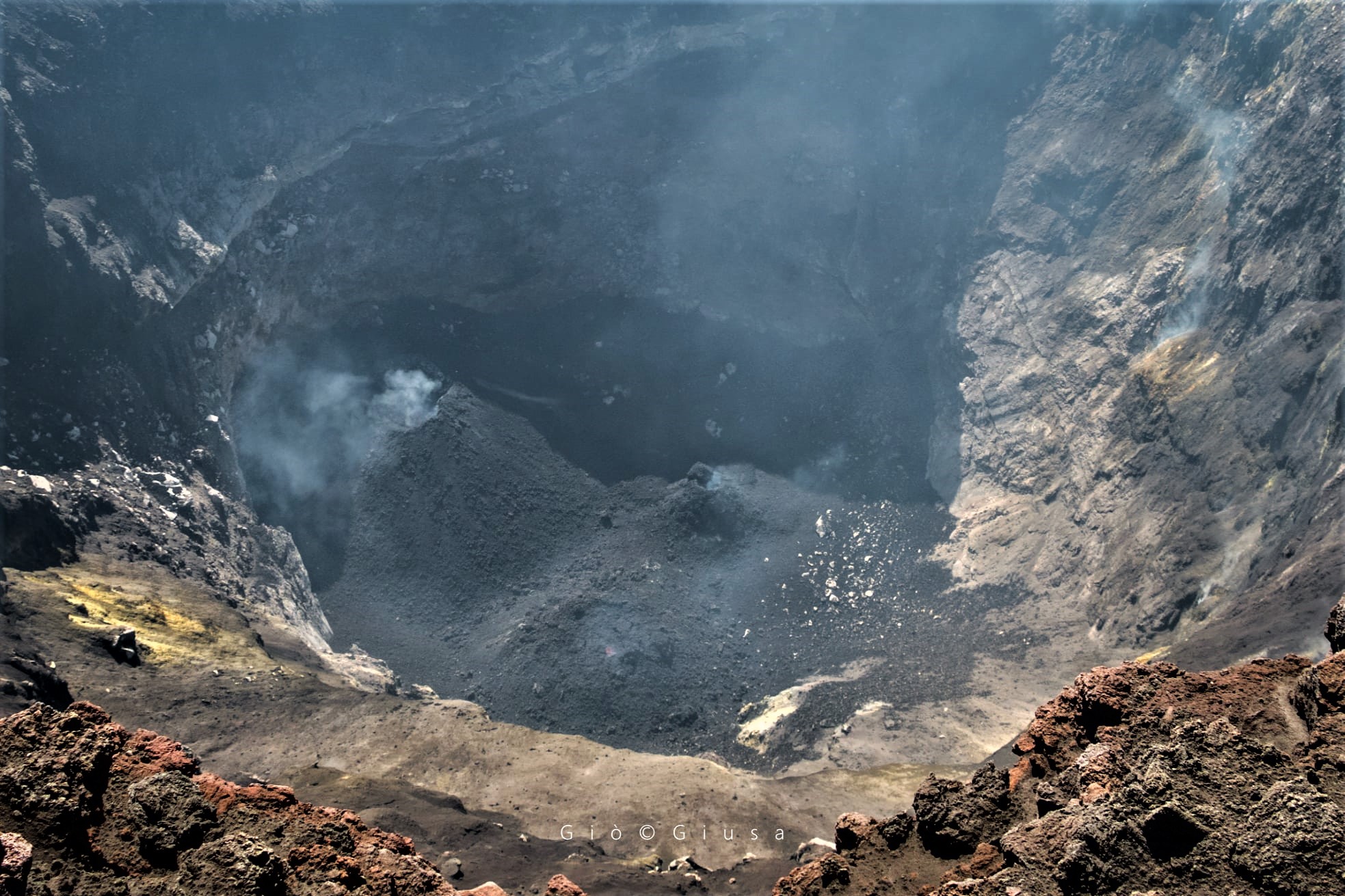 SUMMARY OF THE STATE OF ACTIVITY
In the light of the surveillance data, it is highlighted:
1) VOLCANOLOGICAL OBSERVATIONS: Variable strombolian activity with emission of ash at the New Southeast Crater.
Sporadic and weak ash emissions in the Voragine crater.
Sporadic intracrater strombolian activity at the Northeast Crater.
2) SEISMOLOGY: low seismic activity of fracturing; mean amplitude of volcanic tremor fluctuating in the range of mean values.
3) INFRASON: moderate infrasound activity. 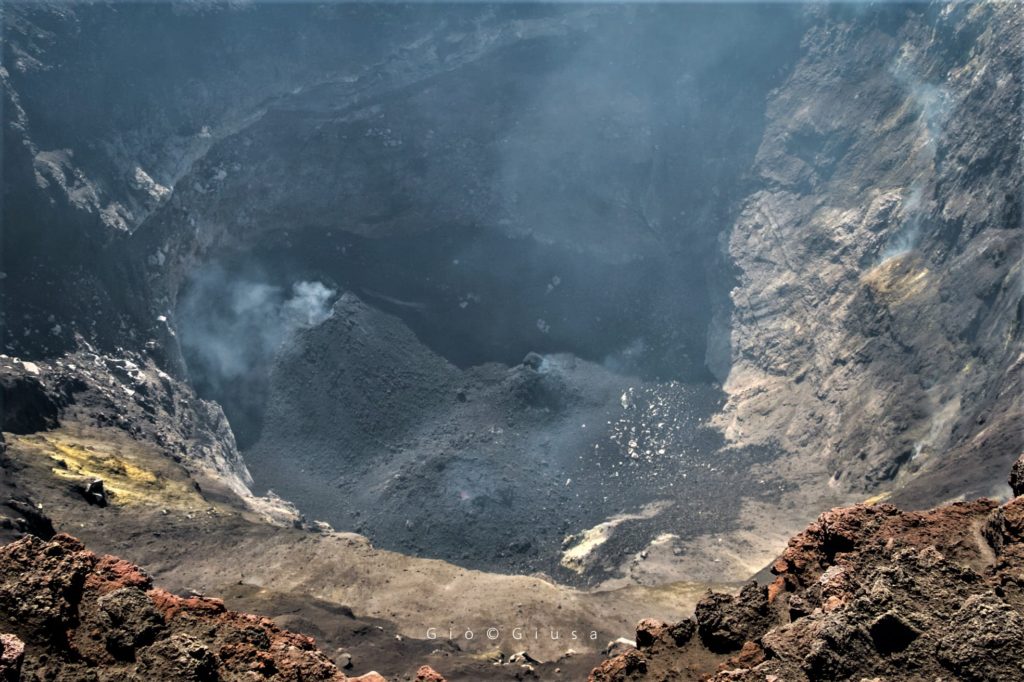 4) DEFORMATIONS: Etna soil deformation monitoring networks have not shown any significant changes over the past week
5) GEOCHEMISTRY: The flow of SO2 is at a medium-low level
HCl flow is at a low level CO2 flow values ​​are recovering slightly from previous weeks while maintaining low levels.
The partial pressure of dissolved CO2 in groundwater is at average values.
C / S report – No new data available (last measurement dated 17/07/2020)
Helium isotope ratio – No new data available (last measurement of 08/31/2020)
6) SATELLITE OBSERVATIONS: The thermal activity in the summit area is at a medium-low level.

During the week, the monitoring of the volcanic activity at the level of the summit craters of Etna was carried out by analyzing the images of the network of surveillance cameras of the INGV section of Catania, Etneo Observatory (INGV-OE). Visibility was very limited due to adverse weather conditions. 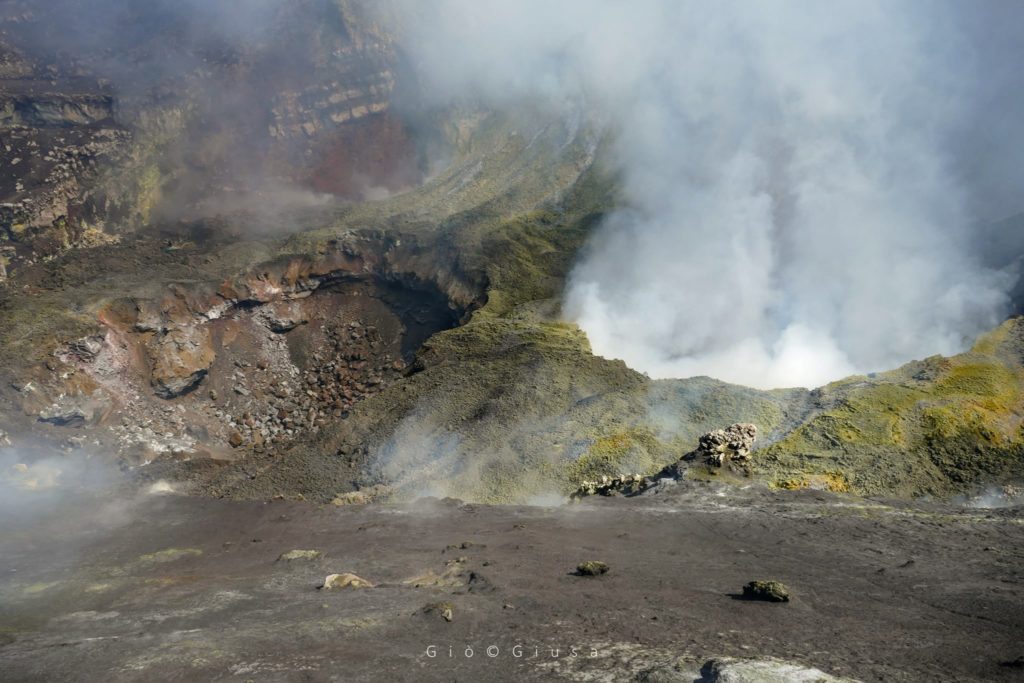 During the week, Strombolian activity was mainly observed at the New Southeast Crater (NSEC), with varying intensity and frequency, which produced discontinuous ash emissions which dispersed rapidly. In the phases of greater intensity, it was possible to observe the fall of incandescent material on the edge of the crater and in some cases also along the southern flank of the crater.
Regarding the crater of Voragine (VOR), weak and sporadic ash emissions were observed.
During the monitored period, although intermittently, intracrater Strombolian activity continued at the Northeast Crater (NEC).

Volcanic tremor:
The average amplitude of the volcanic tremor showed a similar trend to that of last week, with oscillations almost exclusively in the range of average values. The source of the tremor was located between 2800 and 3000 m above sea level, in the area of ​​the New Southeast Crater

In the light of surveillance data, it is highlighted:
1) VOLCANOLOGICAL OBSERVATIONS: Normal explosive volcanic activity of Strombolian type on levels ranging from medium-low to medium-high (8-16 events / h) and with medium-low intensity in the area of ​​the North and medium-high craters in the Center-South zone.
2) SEISMOLOGY: The seismological parameters do not show significant variations.
4) DEFORMATIONS: The island’s soil deformation monitoring networks did not show any significant changes during the period under review.
5) GEOCHEMISTRY: Medium-low SO2 flux
There are no updates on the soil CO2 flux data.
C / S Ratio – Data not available. The latest values ​​are at medium-low levels (5.45, measurements of 09/13/2020)
Helium isotope ratio – Data not available. The latest measurements are at medium-low values
6) SATELLITE OBSERVATIONS: The thermal activity in the summit area is at a medium-low level.

In the period under observation, the eruptive activity of Stromboli was characterized by the analysis of the images recorded by the surveillance cameras INGV-OE located at 190 m, Punta dei Corvi and 400 m.

The amplitude of the volcanic tremor generally had values ​​between low and medium-low.

After the eruption recorded early in the morning of September 20 at 4:20 a.m. – local time (Figure 1-a), the Sangay volcano recorded a return to the levels of eruptive activity observed between May 2019 and the first weeks of September 2020. The records seismic still show the occurrence of explosions and ash emissions, but much less energetic and similar to those observed in the months preceding the September 20 event, as observed in the seismic recording of Figure 1-b.

According to direct observations and reports from the Washington VAAC, emission heights currently vary between 1 and 2 km above the crater of the volcano, with ash clouds dispersing mainly to the west (Fig. 2 ).

Ash cloud dispersion models show that decreasing their height reduces the likelihood of further ashfall, but that can change suddenly. A common phenomenon after large falls like the one recorded on September 20, is the remobilization of previously deposited ashes, which generates falls of less intensity but which can be repetitive.

As seen in previous months, after the explosive phases, secondary lahars can be generated as a result of the removal of material deposited in the upper area of ​​the volcano due to heavy rains. This phenomenon is mainly limited to the channels of the Volcán and Upano rivers.

Fig. 2. Height of ash emission columns for the year 2020. Heights in the days after September 20 have significantly decreased, returning to values ​​prior to last Sunday’s activity. The prevailing wind direction is West and the average speed is 10 m / s (Source: Washington VAAC).

Based on the information available on the eruptive activity, and on the geological knowledge of this volcano, the Geophysical Institute proposes the eruptive scenarios described below. It should be noted that these scenarios are established at a given time, depending on the activity recorded on the volcano, as well as its evolution trends. Therefore, they are applicable as long as the activity does not show any noticeable change and must be reviewed if the conditions of the volcano justify it. Although a probability of occurrence of each scenario is not established, if the possibility of occurrence of each is presented, qualitatively. 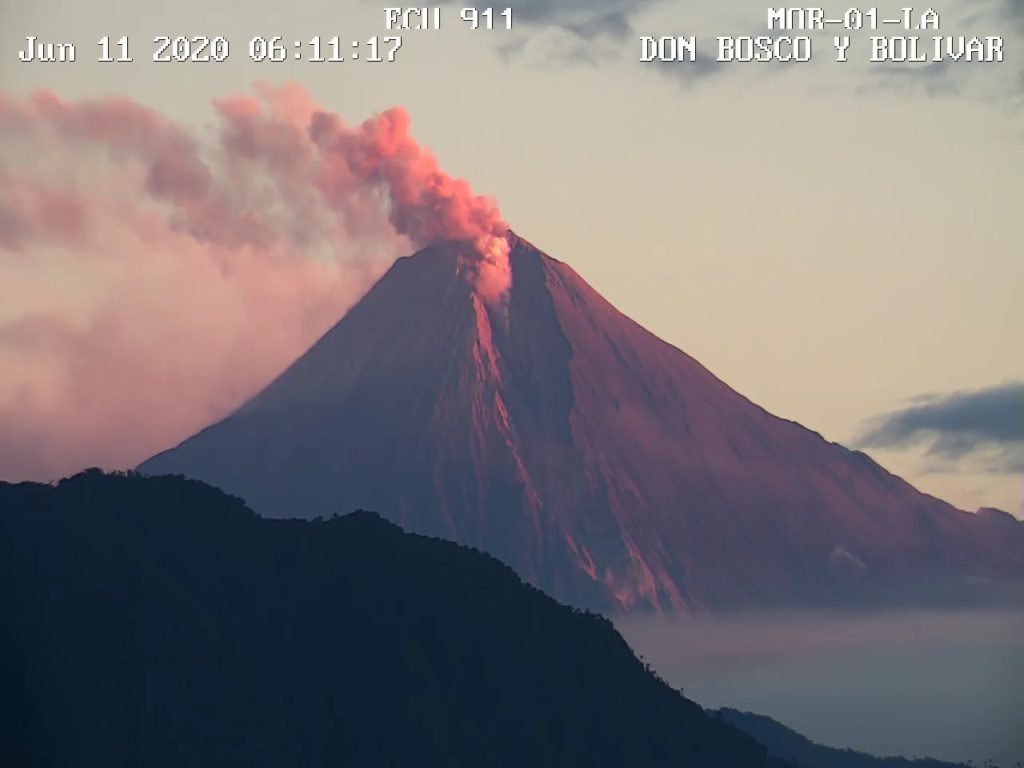 Most likely scenario: eruptive activity continues, with less intensity than that recorded on September 20

The eruptive activity continues by alternating phases of greater eruptive activity with the emissions of ash columns over 2 km high and phases of less activity (ash columns less than 2 km high), but with a significant decrease from the largest eruption recorded on September 20. This scenario involves the continuous emission of lava flows towards the south-eastern flank, with the consequent collapses of the lava front, which produce pyroclastic flows which descend through the sources of the Volcán river (Fig. 3). In this scenario, the main phenomena that may affect the population are: (1) slight ash falls due to the explosive activity characteristic of the volcano and the remobilization of materials deposited by previous events. The movement of ash clouds is controlled by the direction and speed of the wind, which at this time of year is usually strong and is directed west; and (2) the generation of debris flows (lahars) in the Volcán and Upano rivers, associated with the large amount of volcanic material deposited and heavy rains, typical of this region. The possibility of having specific increases in the lava emission rate is also highlighted, generating increases in ashfall for a few hours, then reverting to more pulsating activity. Based on the data available to us to date, this scenario is the most likely in the short term and represents the typical activity of the last 100 years of activity of the Sangay volcano. 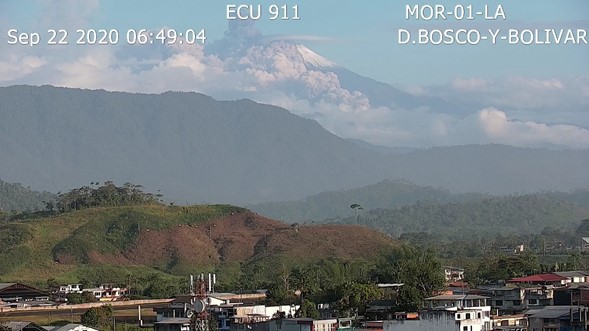 The volcano exhibits an ascending pattern of eruptive activity, associated with a sharp increase in the rate of magma emission. In this scenario, a larger explosive phase could be generated, such as that which occurred in 1628, during which heavy ash fall was reported in Riobamba, even comparable to the activity recorded on September 20. This scenario would be characterized by the generation of new pyroclastic fluxes of much greater volume and scope, as well as the formation of emission columns of greater height and ash content, which would lead to major impacts at the regional level, in particularly in agriculture and animal husbandry. . This type of eruption is similar to those that occurred on the Tungurahua (2006) and Reventador (2002) volcanoes. In the event of a larger eruption, it is not excluded that parts of the new ravine on the south-eastern flank may collapse, generating debris flows (Lahars) of greater magnitude than those previously observed in rivers. Volcán and Upano. However, based on the data available to date, this scenario is highly unlikely in the short term.

The IGEPN is keeping an eye on the evolution of the activity of the Sangay volcano and will report on its details.

During the last 24 hours, according to the monitoring systems of the Popocatepetl volcano, 126 exhalations and 450 minutes of tremor have been identified. These events were accompanied by gas emissions and ash. Due to cloudy conditions not all emissions could be observed. In addition, yesterday at 21:14, a volcano-tectonic earthquake with a calculated magnitude of M2.1 was recorded. 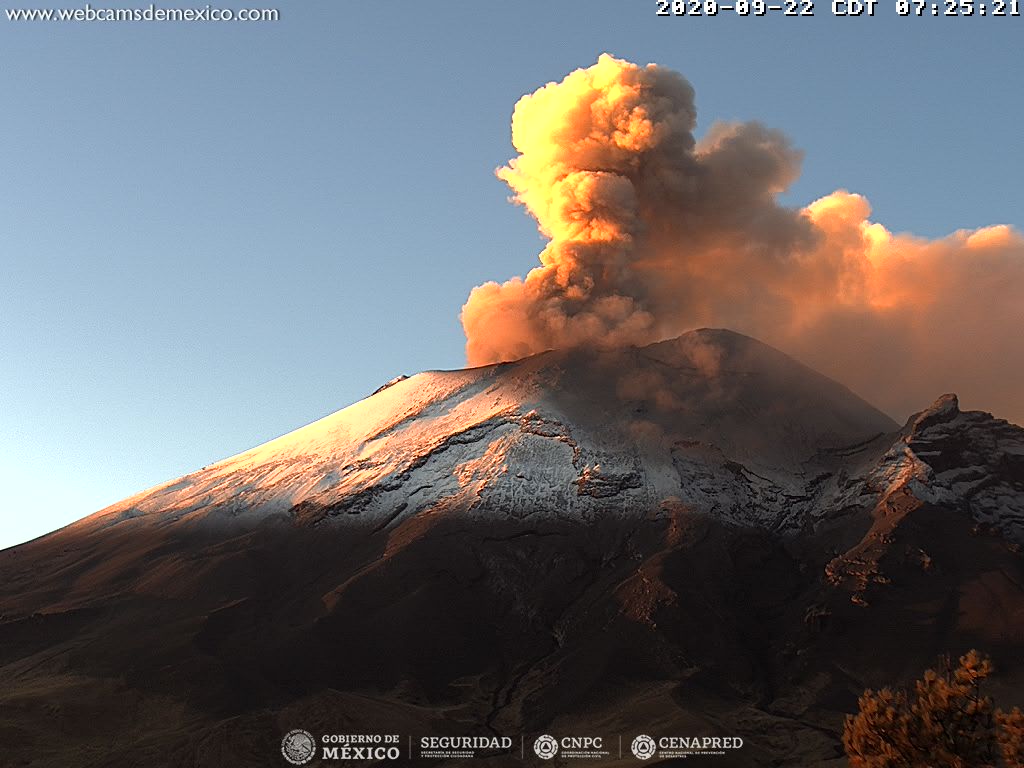 At the time of this report, there is no visibility towards the volcano, however during the morning a constant emission of volcanic gases and ash was observed, which disperses in a southwest direction. 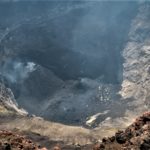 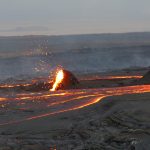