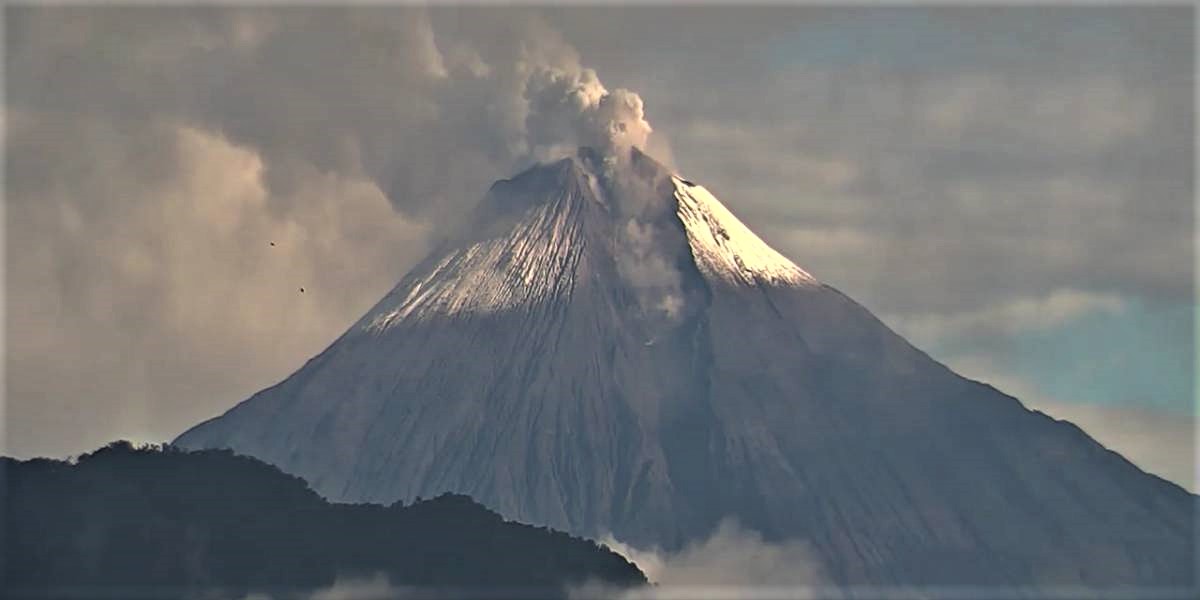 Seismicity
In September 2020, the OVPF recorded in the Piton de la Fournaise massif in total:
• 1648 superficial volcano-tectonic earthquakes (0 to 2.5 km deep below the summit) directly above the summit craters;
• 521 deep earthquakes (2.5 to 5 km deep);
• 759 collapses (in the Dolomieu Crater and at the ramparts of the Enclos Fouqué and the Rivière de l’Est).

Deformation
After more than two months of hiatus, inflation (swelling) of the building resumed around September 21. Thus between September 21 and 27 an elongation of about 0.6 cm max. of the base of the terminal cone was recorded. This phase of inflation was linked to a pressurization of the magmatic supply system located under the summit; between September 24 and 27 a
clear migration of the source at the origin of the deformations was observed between -5 km below sea level and 0.8 km above sea level, reflecting a rise of fluid from the depths to the magmatic reservoir on more superficial. 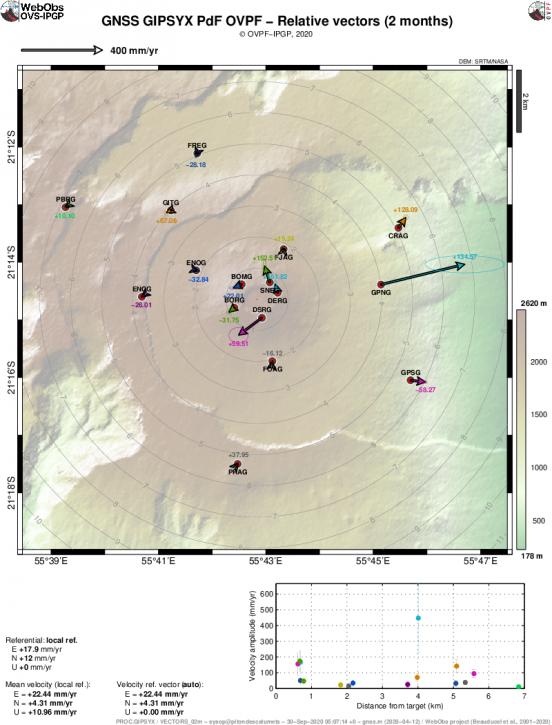 Ground displacements (expressed in speed) recorded on the GPS stations inside and around the Enclos Fouqué during the intrusion of September 28-30, 2020. The horizontal displacements are represented in vector form and the displacements verticals are indicated by the numerical values in color. The ellipse represents the measurement error (© OVPF-IPGP)

This resupply and pressurization of the most superficial storage system is at the origin of the seismic crisis of September 28-30. This seismic crisis was accompanied by rapid deformations of the ground, of around ten cm at the top of the volcano at 70 cm on the GPNG station located at an altitude of 1,414 m, reflecting the migration of a source of pressure to the east. at the origin of a displacement of the upper part of the Grandes Pentes towards the East.

The Geophysical Institute of Peru (IGP) reports that the eruptive activity of the Sabancaya volcano remains at moderate levels; that is, with the continuous recording of explosions with columns of ash and gas up to 2.6 km altitude at the top of the volcano and their resulting dispersion. Therefore, for the following days, no significant change is expected in the eruptive activity.

The IGP recorded and analyzed the occurrence of 2339 earthquakes of volcanic origin associated with the circulation of magmatic fluids under the Sabancaya. An average of 40 low to medium intensity explosions were recorded daily.

During this period, Volcano-Tectonic (VT) earthquakes were located mainly in the North-East and North-West of Sabancaya, with magnitudes ranging from M2.3 to M3.9. The most representative earthquake (M3.9) occurred on September 28 at 2:03 p.m., 19 km northwest of Sabancaya and 10 km deep.
Monitoring the deformation of the volcanic structure, using GNSS data (processed with fast orbits), recorded a slight inflation of the south-eastern flank of Sabancaya and the northern sector of Hualca Hualca. Visual surveillance identified columns of gas and ash up to 2.6 km high at the top of the volcano, which were scattered towards the South-East, East, South-West and West sectors of Sabancaya. This activity has been corroborated by reports of ash fall in the districts of Huanca and Lluta. Satellite monitoring has identified 8 thermal anomalies with values ​​between 1 MW and 13 MW, associated with the presence of a lava body on the surface of the volcano’s crater.

RECOMMENDATIONS
• Keep the volcanic alert level in orange.
• Do not approach within a radius of less than 12 km from the crater. In the event of an ash fall, cover your nose and mouth with wet rags or masks. Keep doors and windows of houses closed.
• Implement prevention and mitigation actions in the face of an increase in volcanic activity. 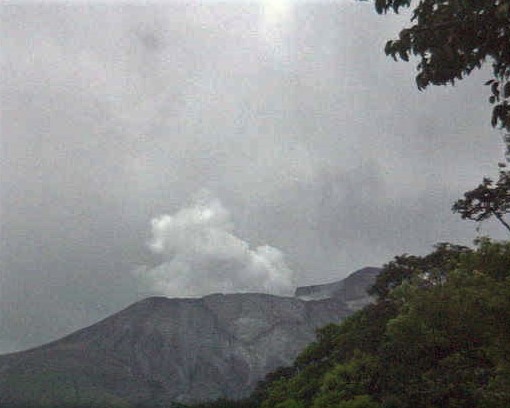 Comments: A small hydrothermal eruption was recorded on the Rincón de la Vieja volcano at 10:55 am. The plume of gas and water vapor rose to 500 meters.

On 05 October 2020 at 19:27 local time, an eruption was recorded on the volcano Rincón de la Vieja, the height reached by the column is unknown due to the visibility conditions of the site.
Duration of activity: 1 minute. 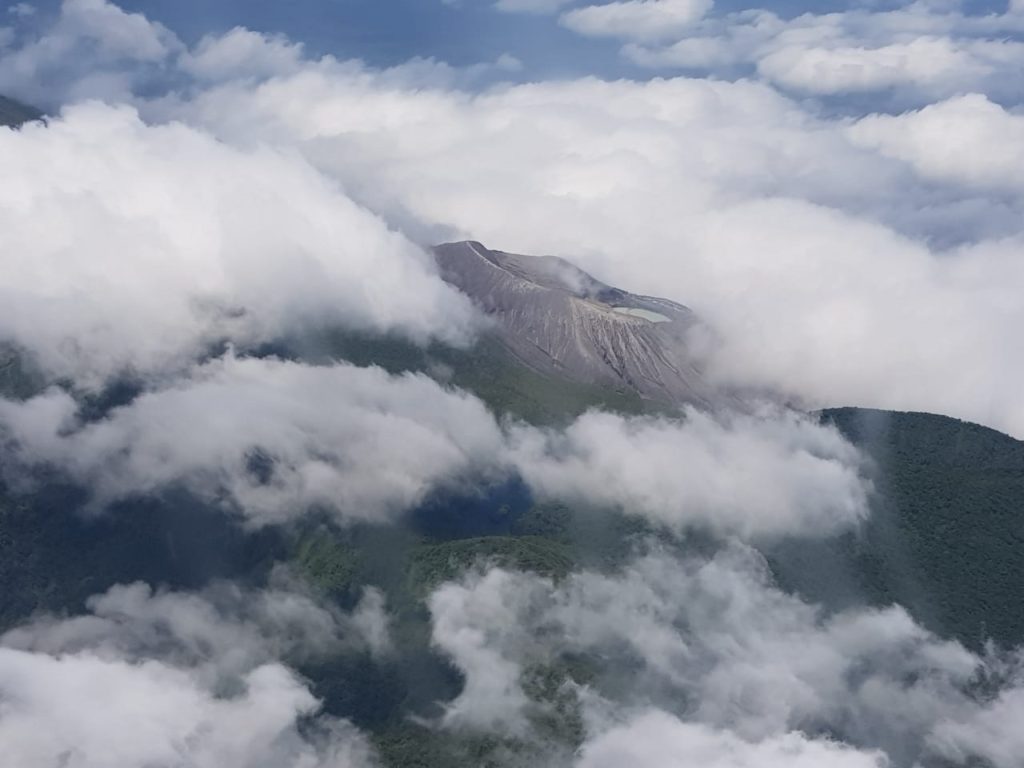 Comments: Cannot be confirmed by the webcam due to dark conditions.

DAILY REPORT OF THE STATE OF SANGAY VOLCANO, Monday 05 October 2020.

Rains / lahars:
During the past 24 hours, there have been several episodes of rain in the area which did not generate signals associated with secondary lahars.
** In case of heavy rains, lahars can be generated in the Volcán, Upano rivers and other tributaries ** 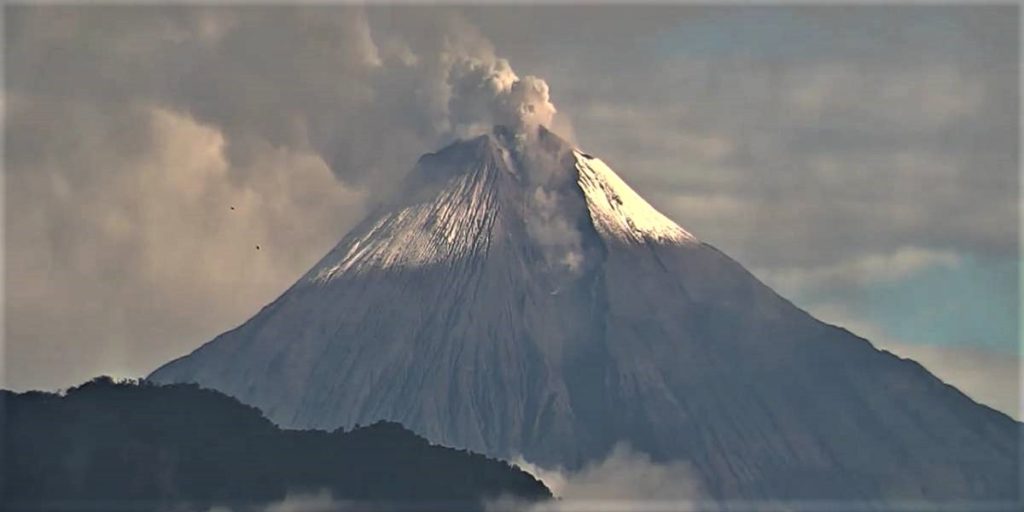 Emission / Ash Column: No emissions were seen through the cameras, however, the Washington VAAC reported 2 emission alerts observed by satellites, whose heights approached 900 meters above the crater level. The direction of the emissions was constant towards the northwest.

Observations: In images shared by ECU911, that from this morning only was partially clear, however, no surface activity was distinguished on the volcano, the remainder of the monitoring period up to this report it is remained cloudy. The seismic reference station has had transmission issues since around 5:40 TL today. 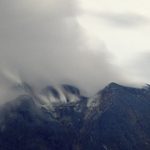