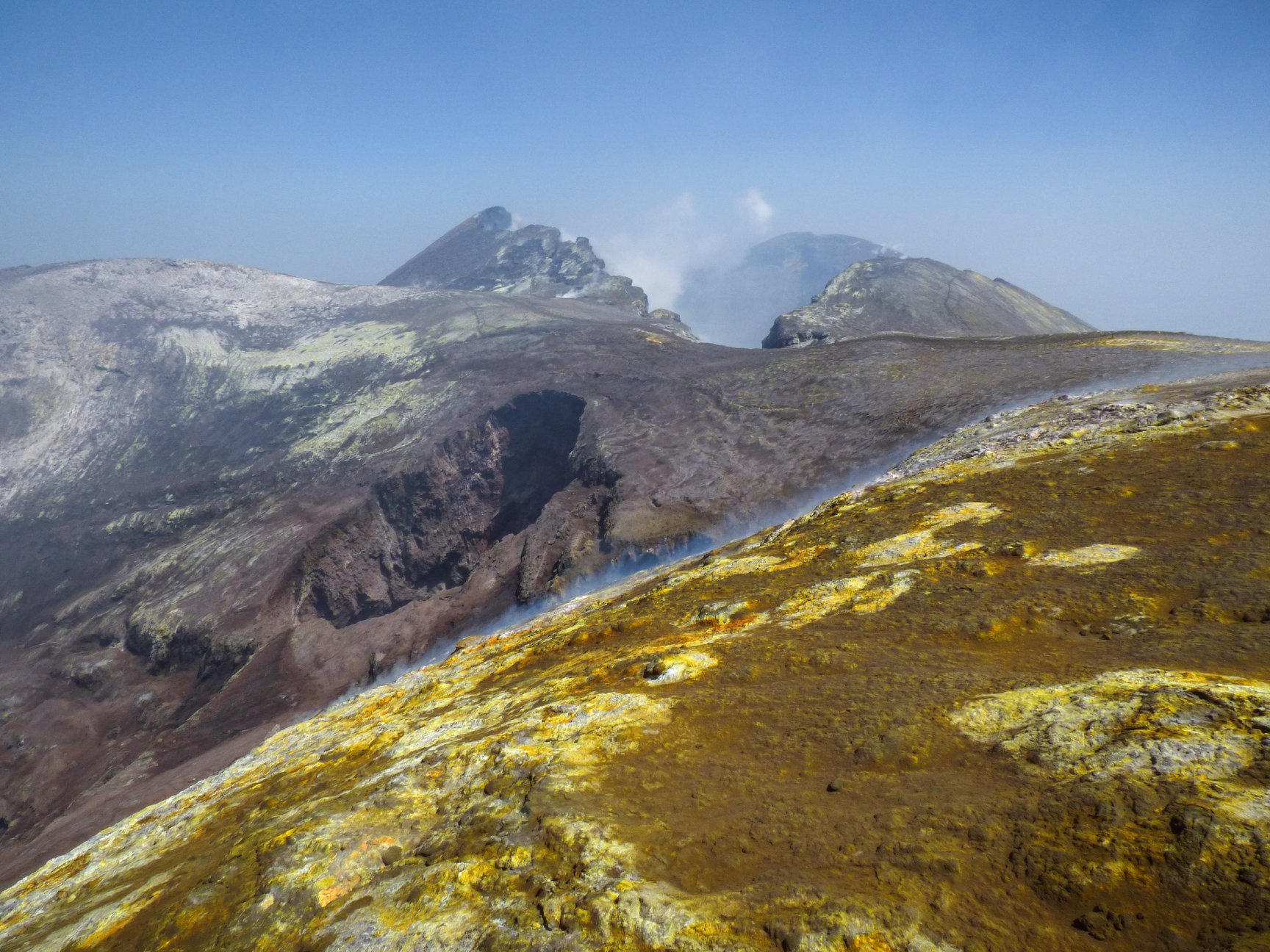 Following the activity of the CHILE and CERRO NEGRO volcanoes , the COLOMBIAN GEOLOGICAL SERVICE (SGC) reports that:

For the period evaluated between June 4 and June 11, 2019, there was a notable decrease in the frequency and seismic energy released, totaling 1325 earthquakes, most of them related to fracturing of the rock within the volcanic building.

This seismicity was mainly located in three sources: one towards the southwestern Chiles volcano at distances between 0.1 and 4 km at depths less than 5 km from the summit (4700 m); a second source located towards the southern sector of Chiles at distances between 0.1 and 3 km and depths less than 5 km, the last source is towards the South-East sector with distances of between 6 and 8 km by report at the summit and at depths between 6 and 10 km. The maximum value of local magnitude was 2.5 and two earthquakes recorded on June 10 at 2:21 and 2:31 were reported as felt. They reached a local magnitude of 2.5 and 2.3 respectively.

The seismic vibration of the volcano fluctuated between 26 and 33 RSAM units on average per day, ie in the normal range. The San Blas seismic station recorded 28 earthquakes related to the movement of fluids in the volcanic system. With regard to earthquakes associated with the rupture of solid media, only two (2) were recorded and were located on the northwest flank of the volcano crater, at depths less than five kilometers and at magnitudes. less than 2.0. None were reported as felt by the inhabitants of the region.

With regard to sulfur dioxide (SO2) emissions, they fluctuated between 312 and 489 tonnes per day (t / d), with an average of 405 tonnes, values near the baseline (<300 t / d) ) and typical of a volcanic system with constant gas emission. MARN’s guard resources visiting the crater do not report a change in activity. The changes recorded through the instruments and the visits made indicate that the volcano presents a normal activity like any active volcano.

A minor eruptive activity is back in the crater of Voragine, on Etna. The first part of this video was recorded during a field visit on June 13, 2019 by Alessia Donatucci, PhD student at the University of Catania and INGV-Osservatorio Etneo. Several ash emissions are shown, coming from a vent located in the crater. At this stage, the phenomenon continues in a discontinuous manner and produces modest but visibles emissions of ashes into the atmosphere (see the second part of the video beginning after 00:50, recorded at sunset by Boris Behncke (INGV-Osservatorio Etneo ) from Tremestieri Etneo.

The Voragine has not produced any eruptive activity since the summer of 2016.
There is currently no variation in the magnitude of volcanic tremor and its source location, and no thermal anomalies have been observed. 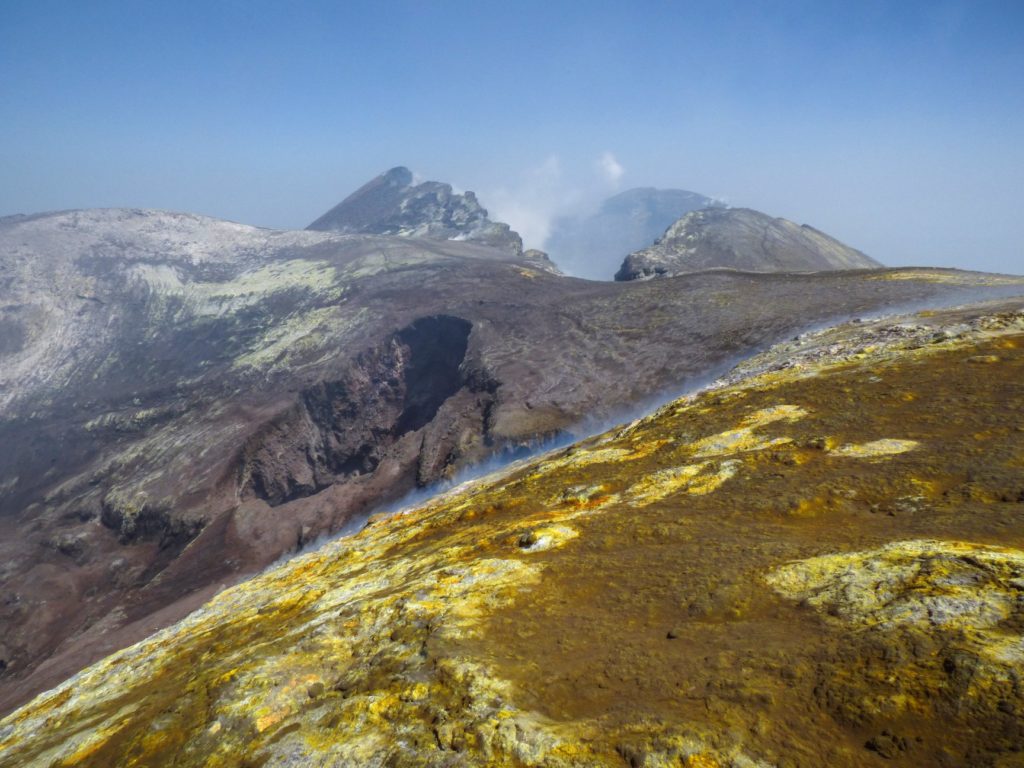 Northeast crater (3326m.) And the big « Pit » of the inner wall of the crater of Voragine.

The eruptive activity that lasted from May 30 to the night of June 5 to 6, 2019 changed the shape of the cone of the New Crater of Southeast Etna. The thermal image shows, at the base of the cone, a minor part of the eruptive vent. In addition, the south-east flank of the cone is cut by a « dry » fracture (which did not emit lava) and ends up in a fairly hot zone, affected by intense fumarolic activity. 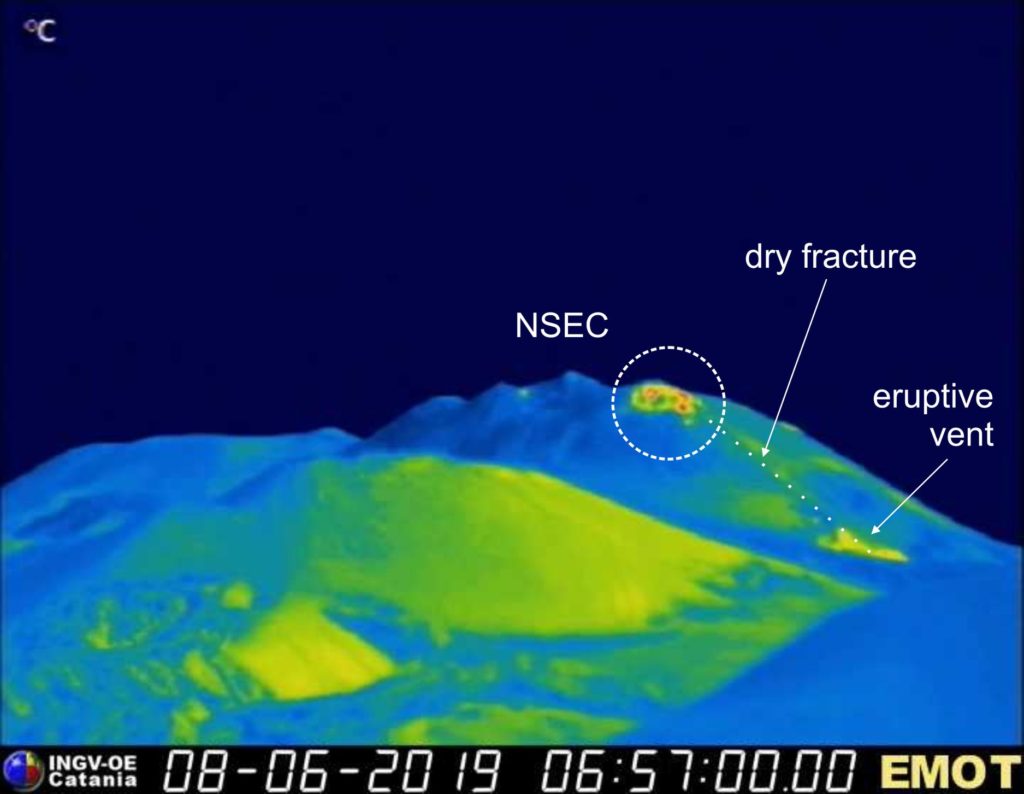 During the past 24 hours, 87 exhalations have been identified using Popocatépetl volcano monitoring systems, accompanied by water vapor, gas and light amounts of ash. In addition, 177 minutes of tremor were recorded.
At the time of writing, due to weather conditions, it has not been possible to observe the crater of the volcano permanently.
On June 11, with the support of the federal police, an overview to estimate the conditions of the volcano crater was made. Although degassing was intense, it could be corroborated that a dome was not formed inside the inner crater, which allows it to maintain dimensions of 350 m in diameter. 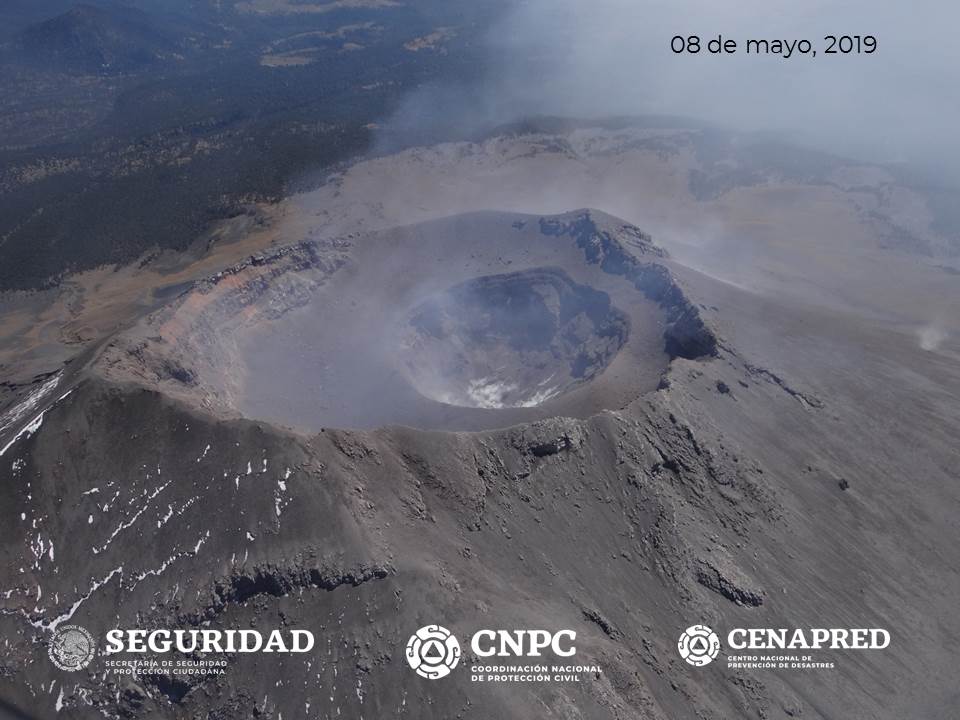 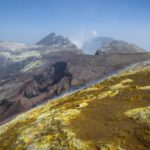