In the light of the monitoring data, we observe:
1) Seismology: This last week, in Campi Flegrei, 20 earthquakes of low magnitude were recorded (Mdmax = 1.1).
2) Deformation: The average value of the maximum uplift zone is about 0.7 cm / month since July 2017. The uprising recorded at the RITE GPS station is about 57.5 cm since January 2011.
3) Geochemistry: The CO2 flux from soil measured last week showed no significant change from the previous period, confirming the persistence of the long-term trend. Last week, the temperature of the main fumaroles of Pisciarelli, after declining due to heavy rainfall events, showed an upward trend until reaching a value of ~ 112 ° C.

Seismology:
In the last seven days, 20 earthquakes have been recorded with -0.8≤Md≤1.1. It was possible to determine hypo central parameters of 17 recorded events. 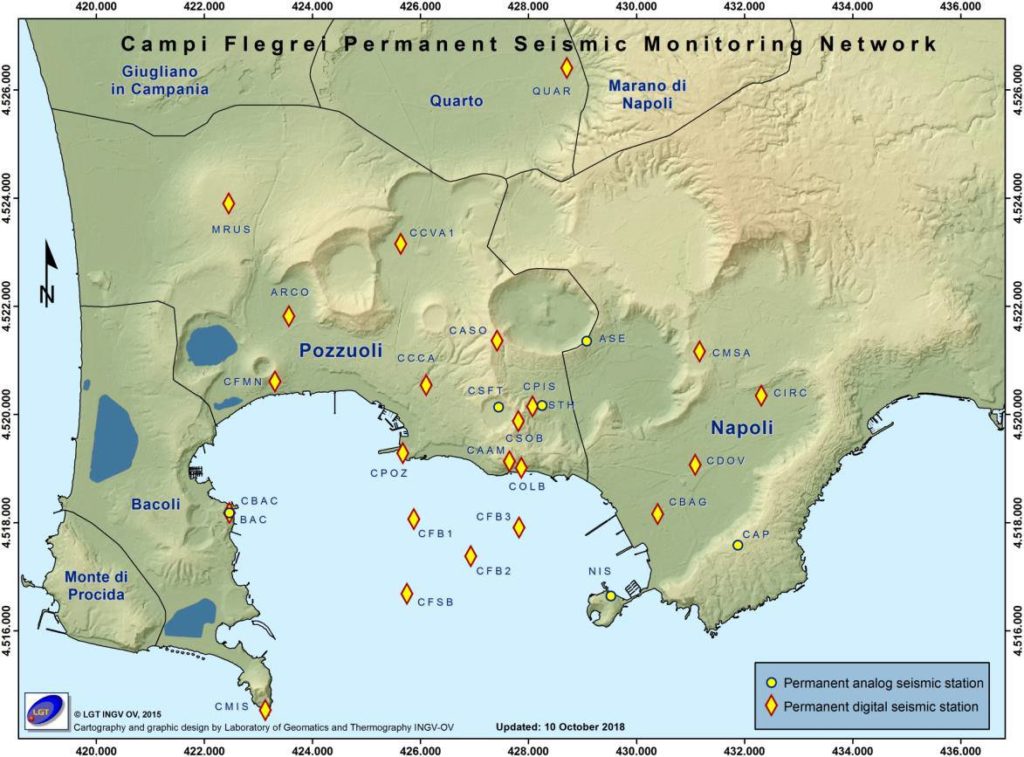 Geochemistry:
The CO2 flux values ​​from the soil recorded continuously at the FLXOV8 station in the area of ​​Pisciarelli (north-eastern Solfatara), highlight the trend already identified continuously for several years. The repair intervention of the station, carried out in November 2016, seems to have led to a permanent change of the site with measured values ​​of CO2 flow lower than in the previous period. The CO2 flux from the ground, measured last week, showed no significant change from the previous period. Last week, the temperature of the main fumaroles of Pisciarelli recorded continuously, after the decrease indicated during the previous period due to the events of heavy rainfall, showed an upward trend until reaching a value of ~ 112 ° C . It should be noted that since this fumarole is an ever-changing natural system, with macroscopic changes in the release site, the recorded temperature may not always coincide continuously with the maximum emission temperature.

Bulletin of activity of the Nevado del Ruiz volcano.
The level of activity continues at the level: Yellow activity level or (III): changes in the behavior of volcanic activity.

The Nevado del Ruiz volcano continues to display unstable behavior.
The seismicity related to fluid dynamics, within the volcanic system, has shown a decrease in the number and increase of recorded earthquake energy compared to the previous week. This type of seismicity showed significant variations in spectral characteristics and was characterized by the presence of continuous volcanic tremors, as well as long-period (LP) and very long-lived (VLP) earthquakes recorded individually or in conjunction with impulse pulses. volcanic tremor. The earthquakes had variable energy levels and were mainly located in the Arenas crater and its surroundings.
Some of these signals were associated with small emissions of gas and ash, confirmed by the cameras installed in the volcano area, by the reports of Colombian geological service personnel and officials of the Los Nevados National Park in the region, as well as reports issued by VAAC (Volcanic Ash Advisory).

The seismicity caused by rock fracturing showed a decrease in the number of earthquakes and an increase in seismic energy released compared to the previous week. This type of seismicity was mainly in the North-East sector and in the Arenas crater and, to a lesser extent, in the South-East and South-West sectors of the volcanic structure. The depths of the earthquakes ranged from 0.3 to 6.4 km. The maximum magnitude recorded during the week was 2.2 ML (local magnitude), corresponding to the earthquake recorded on November 29 at 17:29 (local time) in the Southwest sector at 3.7 km depth.

The deformation of the volcanic surface measured from electronic inclinometers and GNSS (Global Navigation Satellite System) stations showed no significant change during the week.
In tracking the information provided by the MIROVA and NASA FIRMS portals, low-energy thermal anomalies were recorded on 2 December.
The column of gas and steam reached a maximum height, November 30, of 2410 m, measured at the top of the volcano. The direction of dispersion of the column was governed by the direction of the wind in the area, mainly to the northwest and southwest of the volcano.

Level of activity level II (Waspada), since March 25, 2019. The Anak Krakatau (157 m altitude) has experienced an increase in volcanic activity since June 18, 2018, which was followed by a series of eruptions from September 2018 to February 2019. The last eruption occurred on November 13, 2019 resulting in an eruption column height of 200 m. The column was observed of white and black color.

The volcano is covered with fog. From the crater’s CCTV camera, smoke from the white crater was observed, with a high and fine intensity, at about 25 to 50 meters above sea level. The weather is sunny to cloudy, the wind is weak east and northwest. The temperature is about 22 to 31.6 ° C., the humidity is 87 to 91%.

Thanks to the seismographic recordings of December 3, 2019, we noted:
4 low frequency earthquakes.
Continuous tremor, amplitude 0.5 to 5 mm (dominant value 1 mm)

VONA:
The last code sent by VONA was the color code ORANGE, published on November 13, 2019 at 18:32 WIB. In relation to the eruption observed by the CCTV camera, with a thick eruption column of white and black color rising to 207 m above sea level or about 50 m above the summit. The eruption column was moving north.

SUMMARY OF THE ACTIVITY REPORT.

In light of the surveillance data, we highlight:
1) VOLCANOLOGICAL OBSERVATIONS: Strombolian intra-crateric activity with sporadic ash emissions from the Northeast Crater and Craters of Voragine and Bocca Nuova, rarer Strombolian explosions and ash emissions from the New Southeast Crater.
2) SISMOLOGY: Modest seismic activity due to fracturing; stationary parameters of volcanic tremor.
3) INFRASOUNDS: Moderate infrasound activity.
4) DEFORMATIONS: The tilt and GPS sensor networks did not show any significant changes in the previously reported trends.
5) GEOCHEMISTRY: SO2 flows are at an average level. CO2 fluxes in the soil are at medium-low levels. The partial pressure of CO2 in the soil does not show any significant changes. Helium isotopic ratio values ​​are at medium-high values ​​(latest data available November 21). 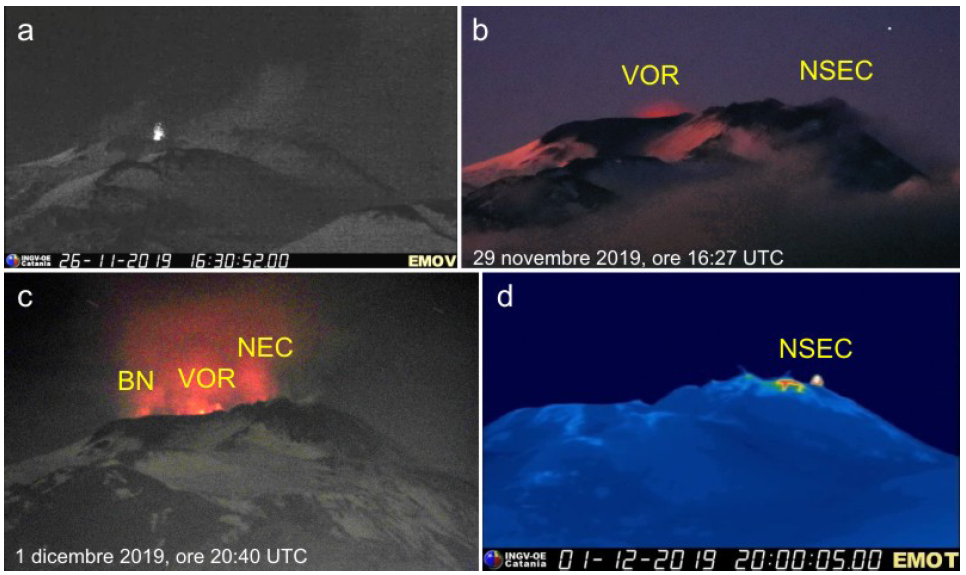 VOLCANOLOGICAL OBSERVATIONS.
During the week, the Etna activity was monitored using surveillance cameras from the INGV Catania section and remote observations made by INGV staff. Observations were periodically prevented by the presence of clouds.

As in previous weeks, the Etna activity was characterized by an eruptive intra-crater activity of the summit craters (Northeast Crater – NEC, Voragine crater – VORagine – crater of Bocca Nuova – BN) and regular degassing with rare Strombolian explosions and ash emissions from the New Southeast Crater. (NSEC). From November 30 to December 1, the activity of all craters increased slightly.

In particular, at the Voragin Crater, strombolian explosions occurred at intervals of 5 to 10 minutes, and many incandescent streams exceeded the crater rim (Fig. 2a), while others explosions only generated lightning in the gas plume above the crater (Fig. 2b). Ground observations by volcanological guides have revealed that the cone, which has been forming in Voragine since mid-September, has increased in height. 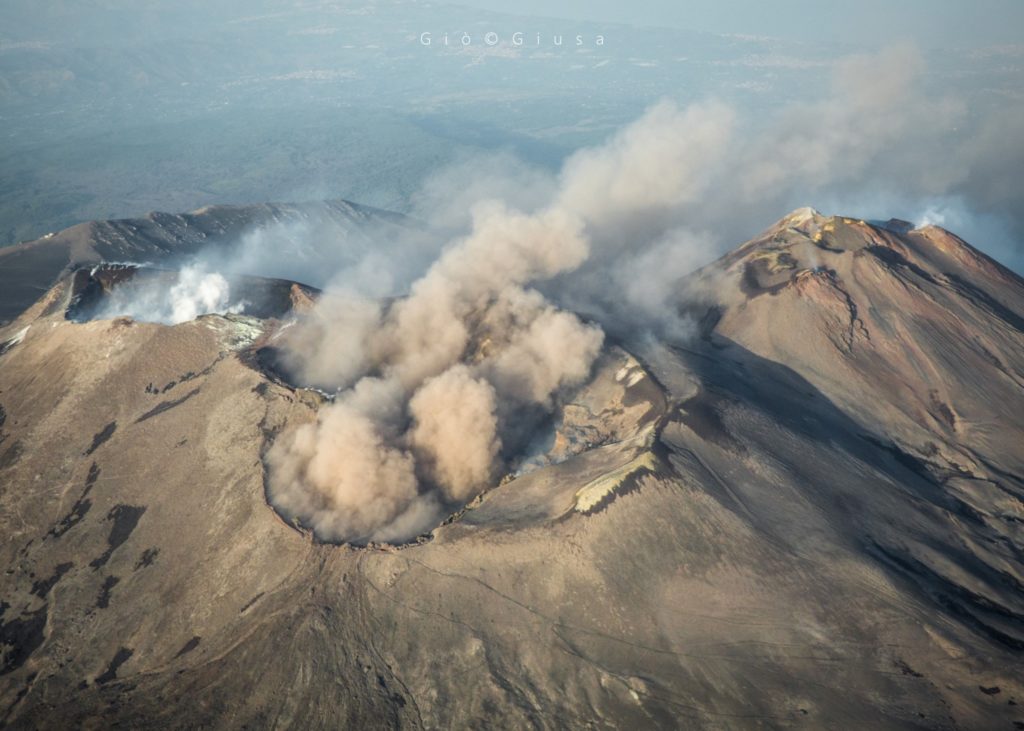 Activity in the Bocca Nuova was more intermittent and visible, with surveillance cameras, some nights only (Fig 2c). The New Southeast Crater began producing sporadic ash emissions on the evening of November 30 (Fig. 2b), which did not generate anomalies in the images of the Montagnola thermal imaging cameras (EMOT) and Monte Cagliato (EMCT); on the evening of 1 December, only one Strombolian explosion was observed, with a visible thermal anomaly visible on the EMOT images (Fig. 2d).

At the New Southeast Crater, the activity was almost continuous throughout the week, but with strong fluctuations from one day to the next, reaching its maximum intensity towards the end of the evening of December 1st. However, at no time was eruption of eruptive crater products observed.

SEISMOLOGY.
Volcanic Tremor: During the week in question, the average amplitude of volcanic tremor showed modest fluctuations around high values. No significant changes were observed compared to the previous week. The sources of the tremor are located under the craters of the summit, between 1500 and 3000 m altitude, above the mean sea level.

Nice activity on the Sakurajima these days.

The shock waves of the explosion are very distinctly noted at the beginning of the video. 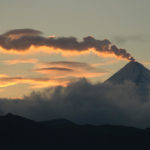