Video taken with the volcanic surveillance camera RSN-UCR. An explosive eruption of phreatic type with projection of ash and fragments of rock (some have a ballistic trajectory). Due to wind conditions at the top, the materials quickly moved west and southwest of the crater to reach the viewpoint.

Comments: A hydrothermal eruption of the Poás volcano has been reported at 05h40. The plume of gas and ash reached 2 km high and was dispersed by the wind towards the southwest. 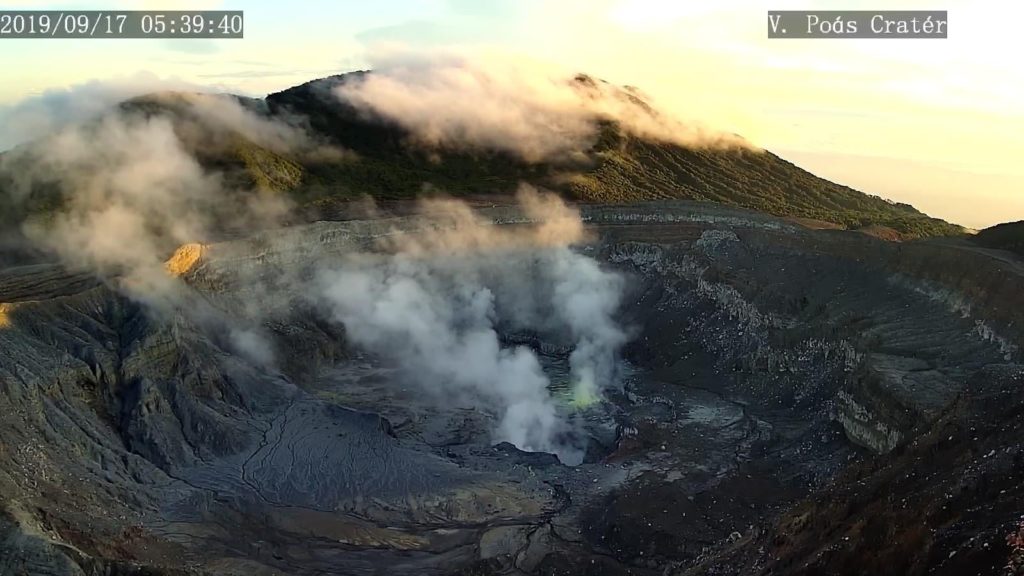 The seismic activity is similar to that of yesterday.
At the time of writing, winds are blowing from the north.
Immediately after the eruption there was degassing of the main mouth and there were projections in the mouth C. In addition, a drop of ash and a smell of sulfur were reported to Trojas de Sarchi and Grecia. Currently, outgassing occurs from the three mouths, especially in the main mouth.

The Volcanological and Seismological Observatory of Manizales announced that the Nevado del Ruiz volcano had a new activity with low intensity earthquakes associated with the expulsion of gas and ash.
The director of the departmental risk management unit, Felix Giraldo, explained that new ash emissions were not excluded and that they would fall in the cities of Manizales, Villamaría, Chinchiná, but also in localities of the department from Risaralda such as Santa Rosa de Cabal and Pereira. 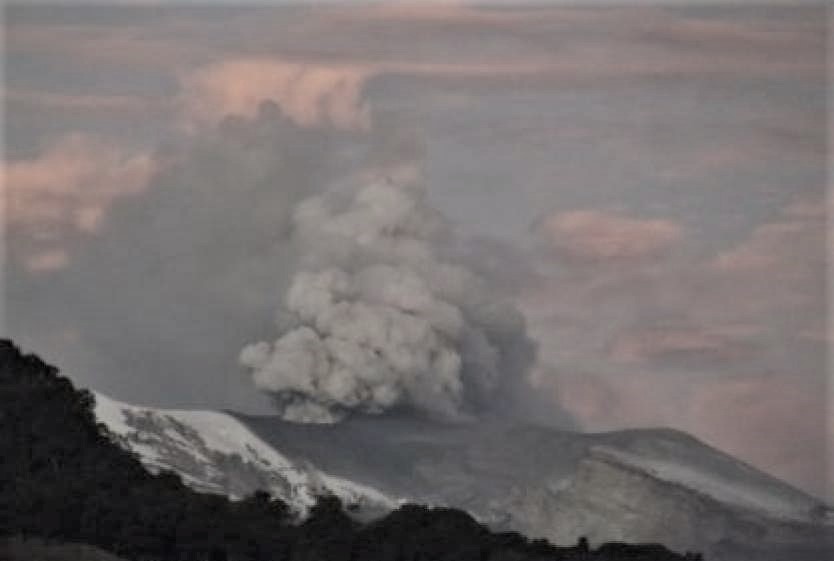 For her part, the director of the Volcanology and Seismology Observatory of the Colombian capital, María Luisa Monsalve, said that the alert level does not change and remains at the yellow level. « The yellow level indicates that the volcano is active, that is to say unstable, but that this activity can increase or decrease, » she explained.
She stated that « there are certain lines of business generated in which even small ash emissions can occur. » No major emission or eruption that can alter alert levels is anticipated. changes may occur later on more significantly.  »
He noted that the dispersion of the ashes was governed by the direction of the wind, which has so far marked major trends to the north and southeast of the volcano.

According to the latest report of the observatory, this activity was appreciated thanks to webcams, installed in the area of ​​the volcano. Experts say the height of the column has varied between 200 and 1,200 meters measured on the top of the volcano.

The Geophysical Institute of Peru (IGP) reports that the Ubinas volcano continues its eruptive process. To date, there is seismic activity and thermal anomalies that would be associated with the rise and nearness of magma near the surface. Similarly, bluish gas (magmatic) and water vapor emissions are recorded and observed using surveillance cameras. In this scenario, moderate explosive activity and / or ash emissions are expected this week. 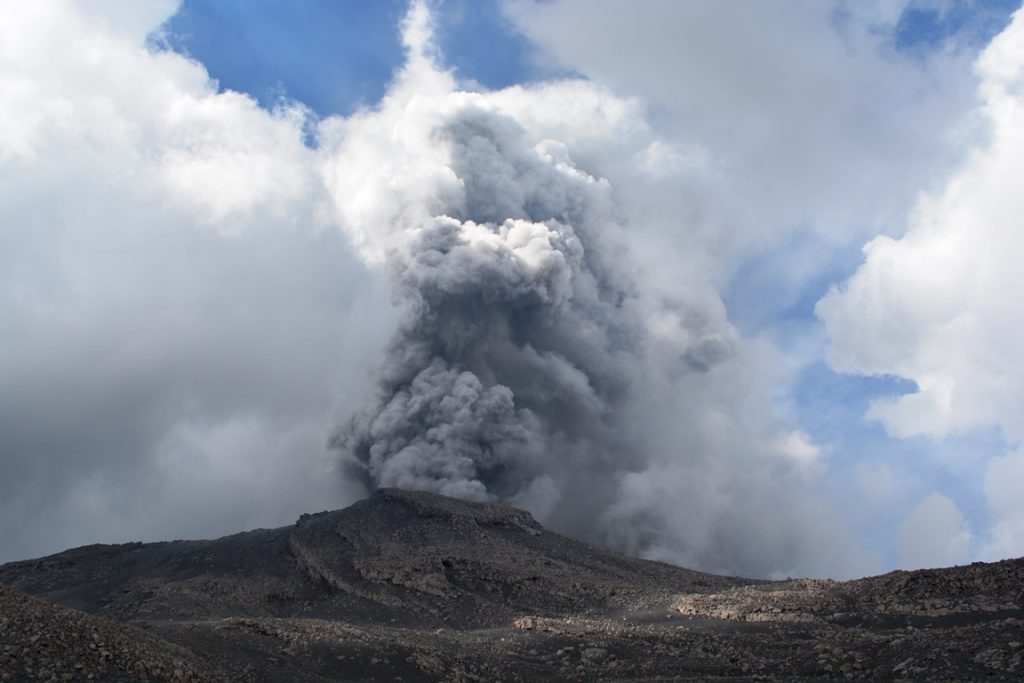 During the period from 23 to 29 September, the IGP recorded and analyzed a total of 4419 seismic events associated with the eruptive process of the Ubinas volcano, with a predominant seismicity of the volcano-tectonic (VT) type, related to fracturing. of rocks inside the volcano, with an average value of 515 events per day, all with magnitudes lower than M2.5. Seismic signals that are related to the rise of the magma (hybrid type) are still recorded, at the rate of 69 events per day. During this period, no volcanic explosion was recorded.

The surveillance cameras recorded continuous emissions of bluish gas (of magmatic origin) and water vapor that was less than 1,000 m above the summit of the volcano. The monitoring of the deformation of the volcanic structure, using GNSS data (processed with fast orbits), presents no significant anomalies. The MIROVA satellite monitoring recorded 5 thermal anomalies ranging from 2 to 3 MW, due to the presence of a hot body under the crater of the volcano.

Mt Ulawun Northern Vent eruption this morning at around 5am. Big cloud of ash still gushing out from the vent. Urgent assistance and assessment from Disaster officials in Kimbe and Kokopo required up at Navo, Bialla.

RVO reported that during 7-8 August minor emissions of white vapor rose from Ulawun’s summit crater. Seismicity was dominated by low-level volcanic tremor and remained at low-to-moderate levels. RSAM values fluctuated between 400 and 550 units; peaks did not go above 700. 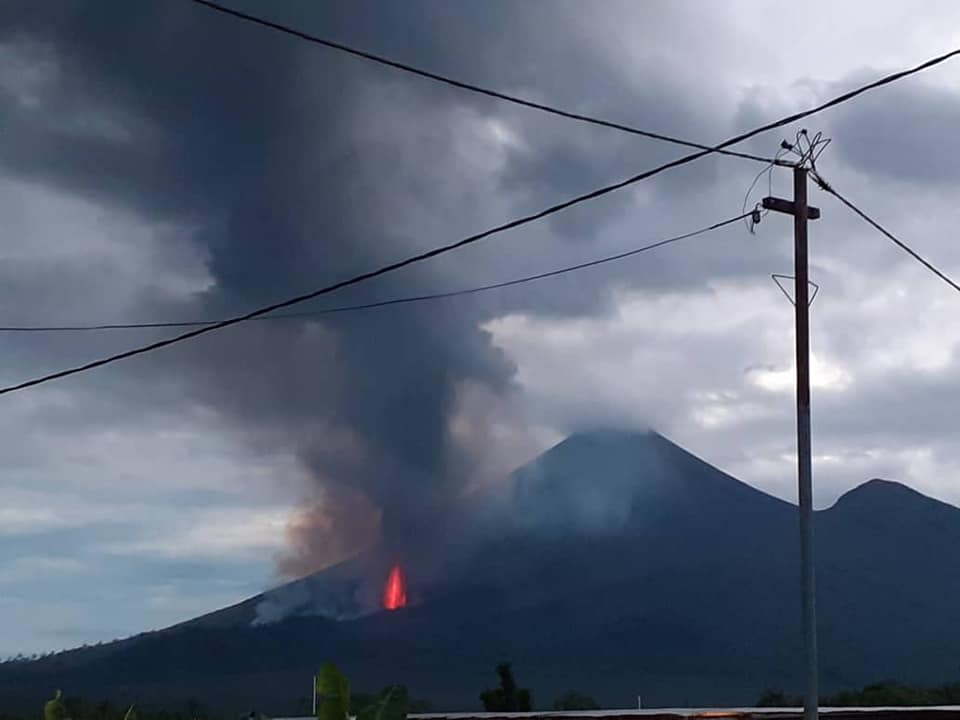 The symmetrical basaltic-to-andesitic Ulawun stratovolcano is the highest volcano of the Bismarck arc, and one of Papua New Guinea’s most frequently active. The volcano, also known as the Father, rises above the N coast of the island of New Britain across a low saddle NE of Bamus volcano, the South Son. The upper 1,000 m is unvegetated. A prominent E-W escarpment on the south may be the result of large-scale slumping.

Satellitic cones occupy the NW and E flanks. A steep-walled valley cuts the NW side, and a flank lava-flow complex lies to the south of this valley. Historical eruptions date back to the beginning of the 18th century. Twentieth-century eruptions were mildly explosive until 1967, but after 1970 several larger eruptions produced lava flows and basaltic pyroclastic flows, greatly modifying the summit crater. 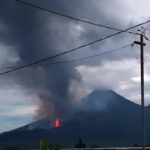 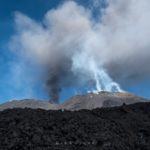