Activity Summary:
Kīlauea Volcano is not erupting. Monitoring data from the past nine months have shown steady rates of seismicity, deformation, and low rates of sulfur dioxide emissions at the summit and East Rift Zone, including the area of the 2018 eruption.

As of March 26, Kīlauea Volcano is at NORMAL/GREEN.

Despite this classification, Kīlauea remains an active volcano, and it will erupt again. Although we expect clear signs prior to a return to eruption, the time frame of warning may be short.

Good weather provided clear views of Halema‘uma‘u during a routine visit to the webcam on the northwest rim of the caldera. USGS photo by M. Patrick, 05/17/2019.

Observations:
Monitoring data have shown no significant changes in volcanic activity over the past week. Rates of seismicity across the volcano have not changed much over the past several months, with earthquakes occurring primarily in the summit and south flank regions. The largest Kīlauea earthquake over the past week was a M2.5 event on Kīlauea’s southwest flank on June 6, at a depth of 6 km (4 miles) below sea level. No felt reports were submitted for this earthquake, or any other earthquake under Kīlauea volcano this week.

Since early March, GPS stations and tiltmeters at the Kīlauea summit have recorded deformation consistent with slow magma accumulation within the shallow portion of the Kīlauea summit magma system (1-2 km or approximately 1 mile below ground level). However, gas measurements have yet to indicate significant shallowing of large volumes of melt. HVO continues to carefully monitor gas output at the Kīlauea summit and East Rift Zone for important changes. 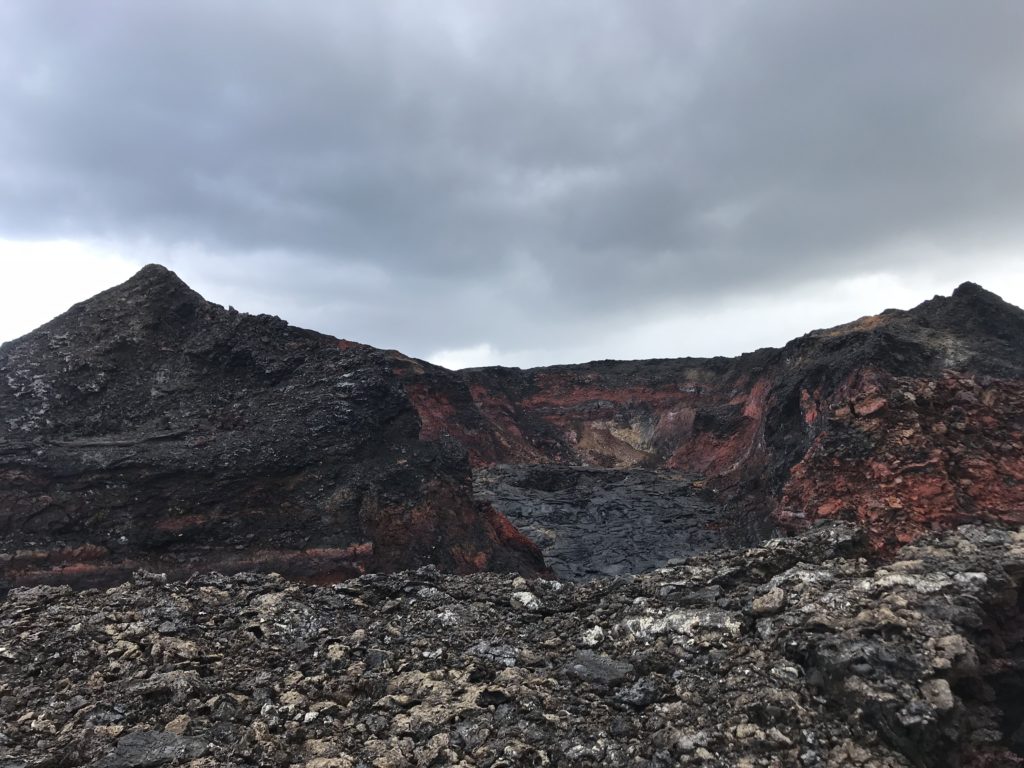 On June 3, an HVO field geologist visited the site of the fissure 8 webcam on Kīlauea Volcano’s lower East Rift Zone. The purpose of the trip was to change batteries in the webcam and make visual observations of fissure 8’s cone and interior. No steam or fumes were visible and only a faint smell of sulfur was momentarily detected. The tan and gray rock in the foreground is the exterior surface of a lava levee on the opposite side of the fissure 8 spillway. View is to the southwest. USGS image by C. Parcheta.

Further east, GPS stations and tiltmeters continue to show motions consistent with refilling of the deep East Rift Zone magmatic reservoir in the broad region between Puʻu ʻŌʻō and Highway 130. This trend has been observed since the end of the 2018 eruption, however there is an indication on tiltmeters that this motion has been slowing down over recent weeks. While the significance of this pattern is unclear, monitoring data do not suggest any imminent change in volcanic hazard for this area. 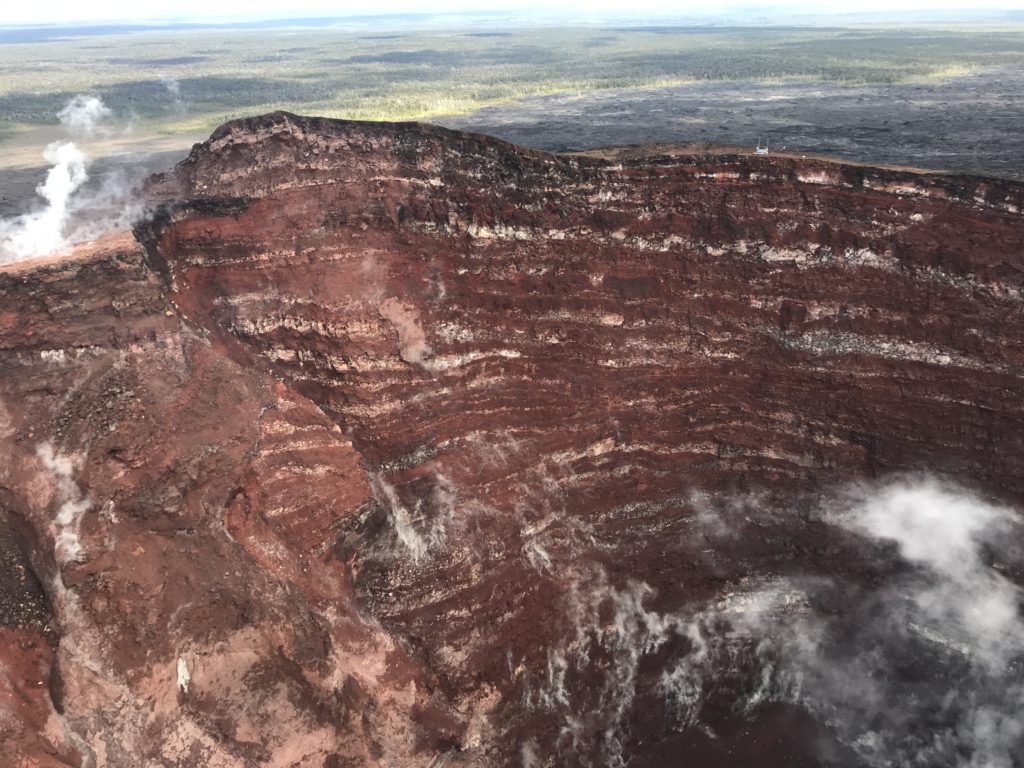 On May 7, 2019, field crews visited a telemetry hub on the rim of Pu‘u ‘Ō‘ō to assess damage after a small collapse on May 1. During the overflight, photos and observations were made of the Pu‘u ‘Ō‘ō crater. The crater walls expose a clear sequence of lava flows and cinder that built the cone in the early 1980s. USGS image by F. Younger.

The Hawaiian Volcano Observatory (HVO) continues to closely monitor seismicity, deformation, and gas emissions for any sign of increased activity at Kīlauea. HVO maintains visual surveillance of the volcano with web cameras and occasional field visits. HVO will continue to issue a weekly update (every Tuesday) until further notice, and will issue additional messages as warranted by changing activity.

At 10:40 am, a moderate explosion was recorded and its emission, due to weather conditions, could not be fully observed. However, an approximate height of 5 km was estimated as the winds dispersed to the south-southwest.

In the last 24 hours, thanks to the monitoring systems of the Popocatépetl volcano, 115 exhalations have been identified, accompanied by water vapor, gas and light amounts of ash. There were also three explosions, the first was recorded yesterday at 18h22, the two others were recorded today at 16h03 and 08h54. In addition, a volcano-tectonic earthquake was recorded yesterday at 8.40 pm, a magnitude of 1.9, and 27 minutes of tremor.

At the time of this writing, due to weather conditions it was not possible to continuously observe the volcano’s crater.

The monitoring system of the Popocatepetl volcano operates 24 hours a day. CENAPRED closely monitors any event. Any changes to the monitoring parameters will be reported promptly.
CENAPRED urges NOT to APPROACH the volcano and especially the crater, because of the risk of falling ballistic fragments, and in case of heavy rains, to move away from the bottom of the ravines because of the risk of mudslide and debris.

The warning light of Popocatepetl is located in YELLOW PHASE 2.

I. RESULTS OF THE OBSERVATION.
Visual:
The climate around Mount Merapi is generally sunny in the morning, the afternoon and evening are cloudy and foggy. The smoke from the crater is white in color, thin to thick with low pressure. The maximum smoke height of 250 m was observed from the Mount Merapi observation post in Kaliurang on June 8, 2019 at 06:09 WIB.
The morphological analysis of the crater area based on photographs of the Southeast sector revealed no significant morphological changes. The volume of the lava dome is based on an analysis of aerial photographs with drones of May 4, 2019 with 458 000 m3. Since January 2019, the volume of the lava dome has been relatively constant due to the fact that most magma extrusions flow directly into the upper parts of Kali Gendol as hot clouds.
During this week, there was a hot avalanche cloud with a maximum slip distance of 1,000 meters leading to Kali Gendol. 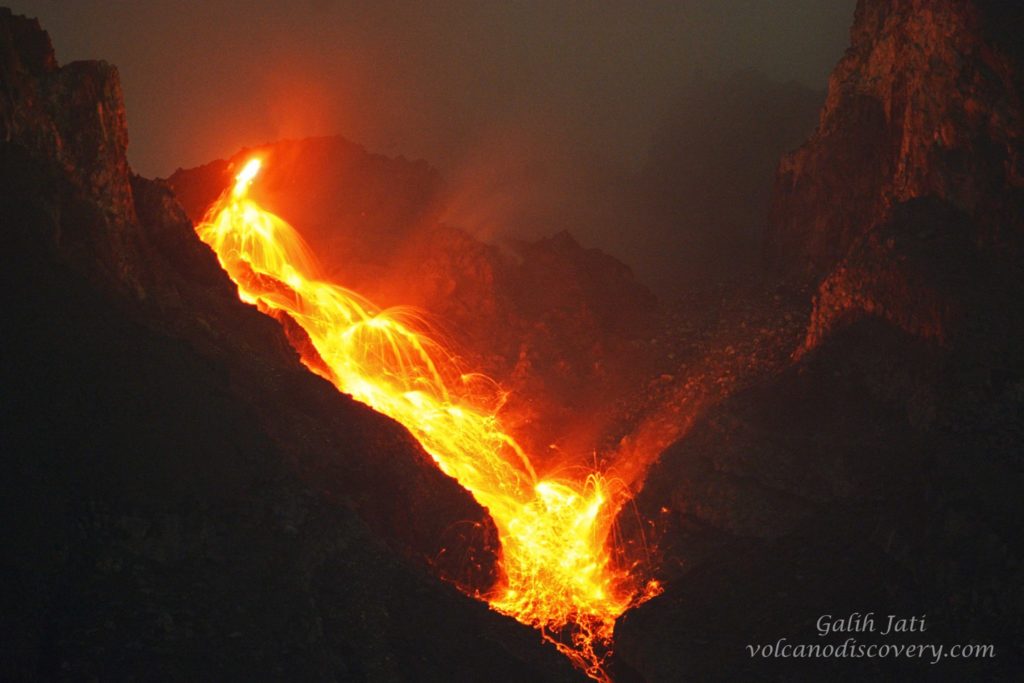 Rain and lahars:
This week, there were no reports of rain, lahars and increased flow in the rivers downstream of Merapi.

II. CONCLUSION :
Based on the results of the visual and instrumental observations, it was concluded that:
1. The lava dome is currently in a stable state with a relatively low growth rate.
2. The volcanic activity of Mount Merapi is still quite high and is at the activity level « WASPADA ».

Activity:
Presence of white degassing fumaroles at a height of 4300 meters that disperses to the West and Southwest .14 to 19 low to moderate explosions are generated per hour which emit columns of gray ash at a height of 4500 meters. at 4800 meters (14765-15750 feet) which are scattered 15 to 20 km to the west and southwest. At night and early in the morning, incandescence was observed at a height of 200 to 300 m with moderate to strong avalanches on the crater contour towards the Seca, Taniluyá, Ceniza and Trinidad gullies. Low / moderate / strong rumblings at the origin of weak to moderate shockwaves are perceived, causing vibrations in the roofs of houses of the communities near the volcano, the sounds are similar to those of an airplane turbine with time intervals of 3 to 5 minutes. Ash falls are recorded at Panimache I, Panimache II, Morelia, Santa Sofia and others. 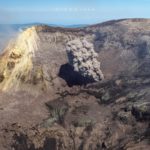