Extraordinary bulletin of activity of the Chiles and Cerro Negro volcanoes
The activity level of volcanoes remains at the YELLOW LEVEL ■ (III): CHANGES IN THE BEHAVIOR OF VOLCANIC ACTIVITY

Since the information reported in the Weekly Activity Bulletin of these volcanoes on July 19, 2022 until the publication of this extraordinary bulletin, the evolution of the behavior of volcanic activity has been accentuated with the process of the seismic swarm of events associated with the fracture of the rock inside the volcanic system, which began on May 27, 2022. A trend of increasing occurrence and released seismic energy stands out, totaling 4484 events over July 22. This seismicity continues to be located mainly under the summit and to the south of the Chiles volcanic edifice, at epicentral distances of less than 4 km and at depths which, in general, do not exceed 6 km from the summit of the volcano ( 4700m above sea level). Since July 19, a total of 21 earthquakes with magnitudes equal to or greater than 2 have been recorded, highlighting those recorded on July 19 at 9:21 p.m., with magnitude 2.6, July 21 at 8:31 a.m. with 2.8 and the 22 July at 8:16 a.m. and 5:46 p.m. with respective magnitudes of 3.5 and 3.2, the latter two being felt by the inhabitants of the region of Corregimiento de Chiles (municipality of Cumbal, in the department of Nariño).

In addition, the seismicity record related to the movement of fluids within the volcanic system with low occurrence and energy level is highlighted, totaling 64 such earthquakes on July 20, this daily record being the higher since the beginning of continuous monitoring in these volcanoes since November 2013. These seismic manifestations were preceded and were accompanied by a deformation of the ground (observed by instruments) which began at the end of March 2022 and continues to this day.

Based on the current behavior of this seismicity and what has been historically recorded in this active volcanic region, the possibility of the occurrence of more high-energy earthquakes, which can be felt by the inhabitants of the area of volcanic influence, is not excluded. . Civil and indigenous authorities are recommended to be attentive to official communications, to inform their communities of what is happening and, in cases where there are houses or buildings with conditions of structural vulnerability, to take preventive measures to avoid conditions that generate risks for their inhabitants. Appropriate management of communication with communities will avoid falling into situations of alarm or misinformation.

Seismicity related to fluid dynamics inside volcanic conduits increased in number of earthquakes and seismic energy released, compared to the previous week. This seismic activity was characterized by the appearance of continuous volcanic tremors, tremor pulses, long and very long period earthquakes. In general, these signals exhibited moderate to low energy levels, variable spectral content, and were located primarily within Arenas Crater. Thanks to the cameras installed in the area of ​​the volcano and the report of the officials of the National Natural Park of Los Nevados and the personnel of the Colombian Geological Service in the field, the gas and ash emissions associated with some of these seismic signals have been confirmed. Likewise, through the FLIR cameras (thermographic cameras) of the volcanic monitoring network,
changes in the relative temperature of the emitted material. 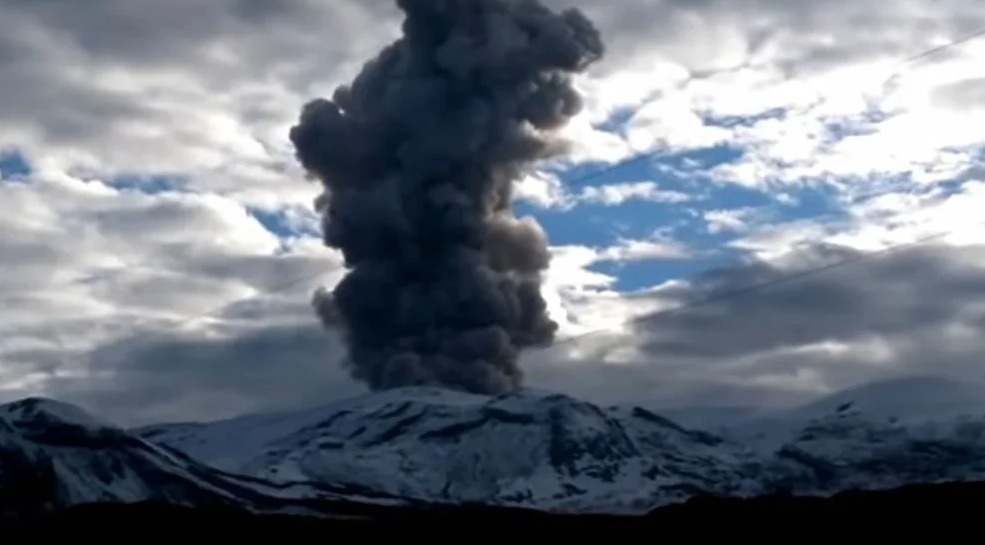 Seismicity associated with rock fracturing increased in number of earthquakes and decreased in level of seismic energy released, compared to the previous week. This seismic activity was located mainly in the North-North-East and South-East sectors of the volcanic edifice and, to a lesser extent, in the South-South-West sector and in the Arenas crater. The depth of the earthquakes varied between 0.6 and 6.8 km.
The maximum magnitude recorded during the week was 1.0 ML (Local Magnitude), corresponding to the earthquake that occurred on July 12 at 03:55 (local time), located 0.3 km south of the Arenas crater, at a depth of 1.7 km.
The recording of several episodes of short duration, low energy, « drumbeat » type seismicity associated with rock fracturing on July 12 and 16, and fluid dynamics in volcanic conduits on July 16 and 17, 2022. This seismicity has been linked to the processes of ascent, emplacement-growth and evolution of a lava dome at the bottom of the Arenas crater.

Summit Observations:
Eruption of lava from the Halemaʻumaʻu western vent into the active lava lake has continued over the past 24 hours. The lava level of the active lake surface remained at the level of the bounding levees. Extensive ooze-outs along the western margin began around 9 pm HST last night and continue at this time. Measurements from an overflight on July 19, 2022 indicated that the crater floor has risen about 133 meters (437 feet) . A sulfur dioxide (SO2) emission rate of approximately 1,300 tonnes per day (t/d) was measured on July 21, 2022. Summit tremor is steady for this eruption’s long term base-line level. 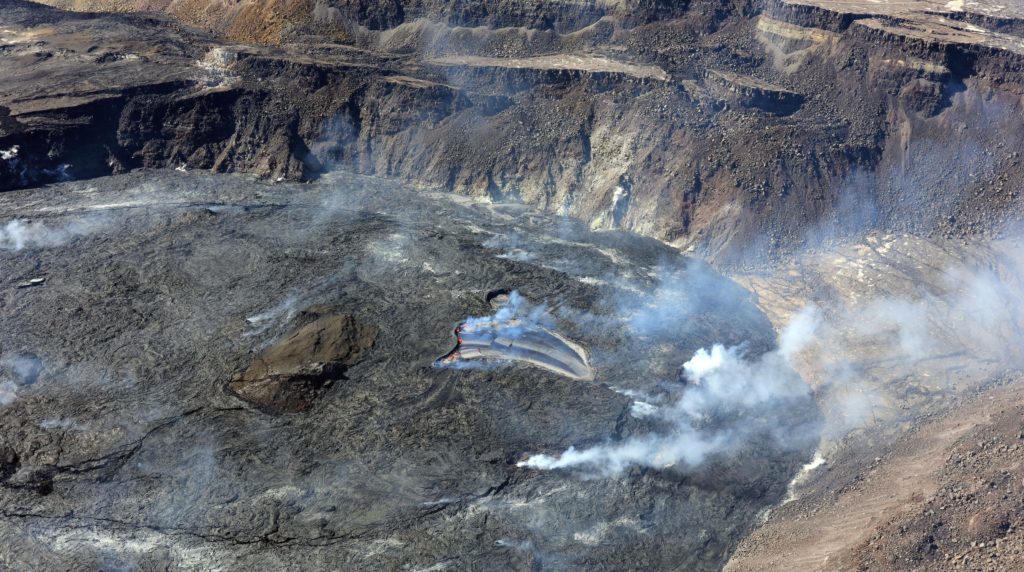 Between July 15, 2022 at 4 p.m. (UTC) and July 22, 2022 at 4 p.m. (UTC), no volcano-tectonic earthquake was recorded by the OVSM. During volcanic reactivation phases, periods of higher seismic activity often alternate with phases of lower seismicity. Since the reactivation of the hydrothermal-magmatic system (end of 2018), the OVSM has not recorded any earthquakes of volcanic origin during the month of May 2019 and less than 3 earthquakes in October 2019 and August 2020. This variability in the number of earthquakes has already, for example been observed following the reactivation of Soufrière de Montserrat.

Mount Ili Lewotolok erupted on Wednesday July 20, 2022 at 4:40 p.m. WITA with an ash column height observed at ± 700 m above the peak (± 2123 m above sea level). The ash column is observed to be white / gray in color with a weak to moderate intensity oriented towards the West. This eruption was recorded on a seismograph with a maximum amplitude of 17.5 mm and a duration of 30 seconds.

The volcano is clearly visible until it is covered by fog. Smoke from the main crater is white with high intensity about 100-200 meters above the summit. The weather is sunny to cloudy, the wind is weak in the East and South-East.
The air temperature is around 20-30.2°C. Humidity 66-80.2%. 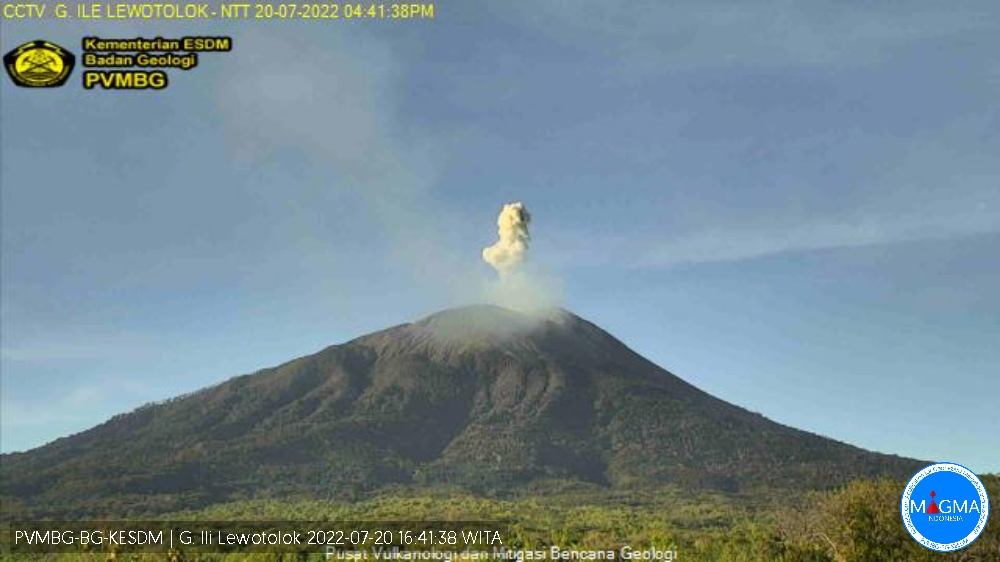 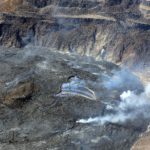 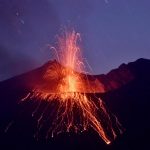