The National Institute of Geophysics and Volcanology, Osservatorio Etneo announces that from 19:20 UTC the monitoring networks recorded an increase in Strombolian activity at the Southeast crater. At the same time, there is a sudden increase in the amplitude of the volcanic tremor, which in the space of half an hour has risen from medium to high levels and currently the amplitude continues to increase. The center of gravity of the source of the volcanic tremor is located in the area of the Southeast crater.
At the same time, an increase in infrasonic activity was observed in both the number and magnitude of infrasonic events. From 21:10 (UTC), the presence of an infrasound tremor is observed. 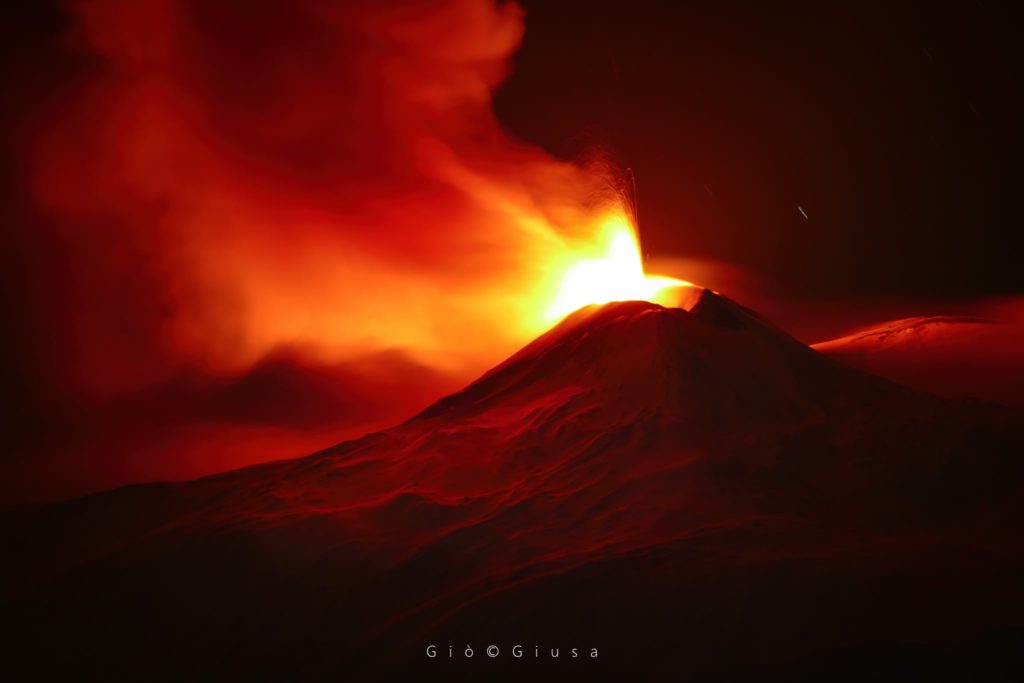 The National Institute of Geophysics and Volcanology, Osservatorio Etneo announces that from approximately 10:15 UTC, a lava flow is observed along the southern flank of the Southeast crater.

The National Institute of Geophysics and Volcanology, Osservatorio Etneo reports that from around 10:50 p.m. UTC, surveillance cameras show a significant decrease in explosive activity at the Southeast Crater. In addition, regarding the effusive activity reported in the previous press release (update # 91), it is produced by two eruptive cracks open on the southern flank of the Southeast crater. the fronts remain for the moment confined to an altitude of about 2850 m above sea level.
The values ​​of the amplitude of the volcanic tremor remain at high levels, although a decrease in the values ​​is observed from around 22:10 UTC. The position of the center of gravity of sources of volcanic tremor has remained substantially unchanged since the last update.

There is also a decrease in infrasound activity and in particular the amplitude of infrasound tremor, while the number and amplitude of infrasonic events remains at a high level.
Concurrent with the maximum activity, the soil deformations measured, in the CDV and CBD stations, an inclination variation of the order of 0.1 microrad. For the moment, the deformation monitoring networks are not reporting any significant changes.

The National Institute of Geophysics and Volcanology, Osservatorio Etneo, announces that since the last update at 23:49 UTC on December 13 (Notice n.92), the explosive activity at the Southeast crater has been of variable intensity and for the moment it appears decreasing again. Regarding effusive activity, from the surveillance cameras it would seem that the lava flow produced by the South fissure is inactive, while the flow coming from the Southwest fissure is currently less fed. In addition, from the more detailed analysis of the camera images, three pyroclastic flows were observed which developed, two at the same time as the opening of the southwest eruptive fissure, respectively at 22:15 and 22:16 UTC (pictured) and the third around 22:30 UTC on December 13. The three currents spread in a south-westerly direction, with the most intense, that of 22:16 UTC, which well passed Mount Frumento Supino. 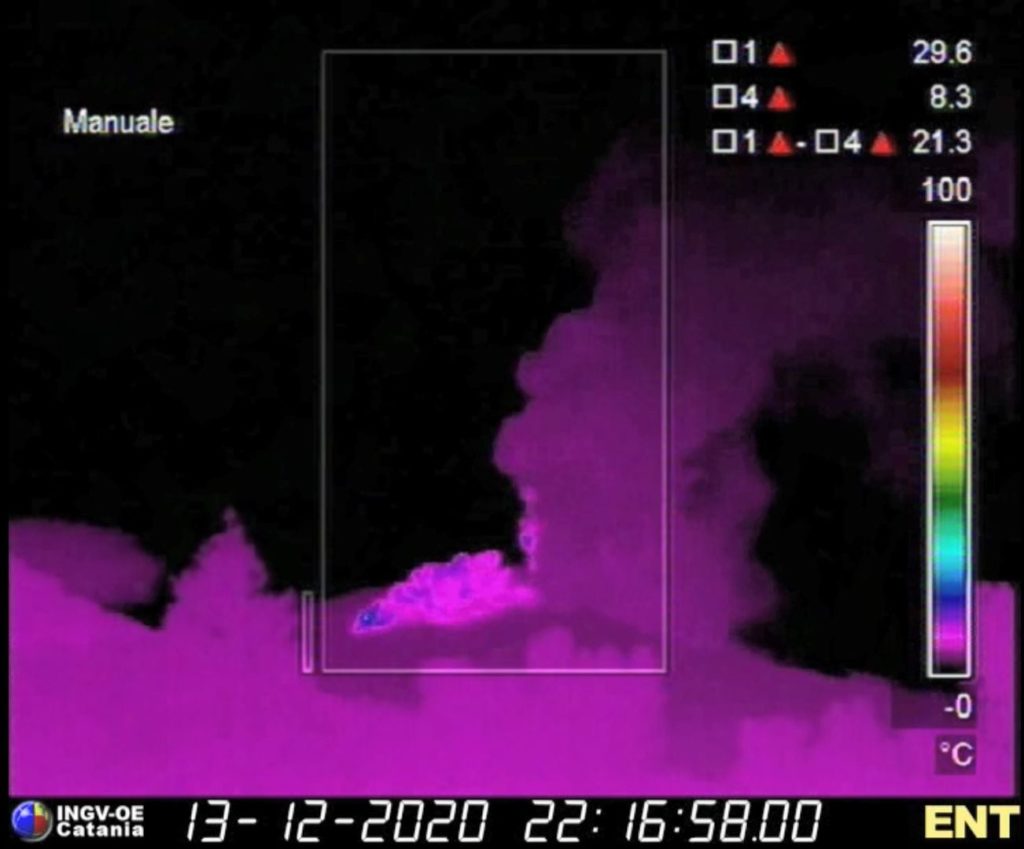 The footage also showed, in several stages, the intense explosive activity, the passage through the lava fountains, notably between 10:00 p.m. and 10:50 p.m. UTC on December 13, 11:50 UTC on December 13 and 12:10 UTC on December 14, and approximately 1:10 and 1:23 UTC. December 14. During the fountain phases, the maximum values of the amplitude of the volcanic tremor were recorded.
At present, the values of the mean amplitude of the volcanic tremor show modest fluctuations, however remaining at high levels. The position of the center of gravity of the tremor sources is located in the area of the Southeast crater. Infrasound activity continues to be sustained, although it shows a clear trend towards a decrease in the frequency of occurrence and extent of infrasonic events. 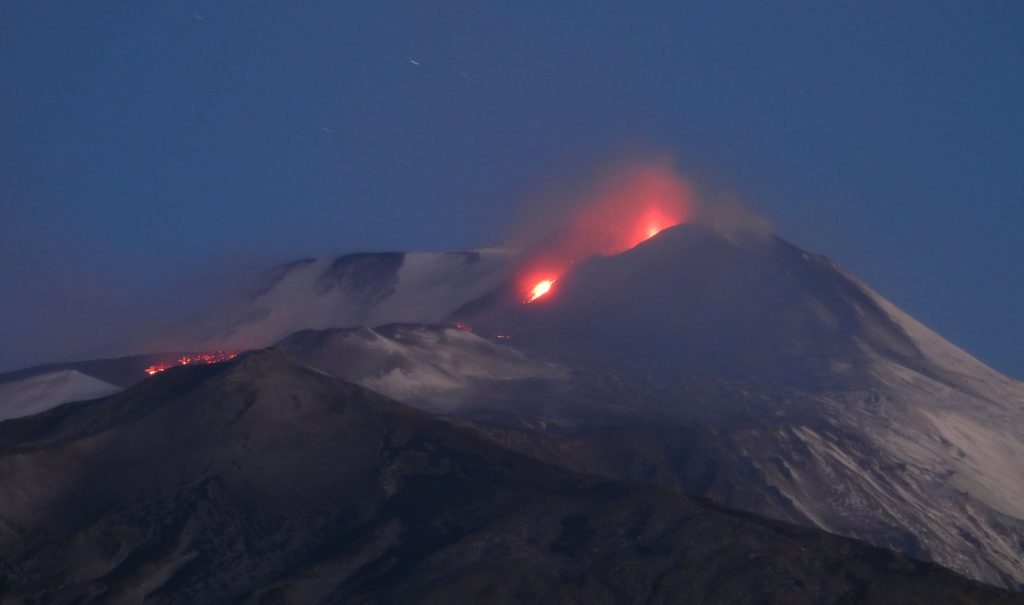 The GPS and tilt sensor arrays show no significant deformation in progress. 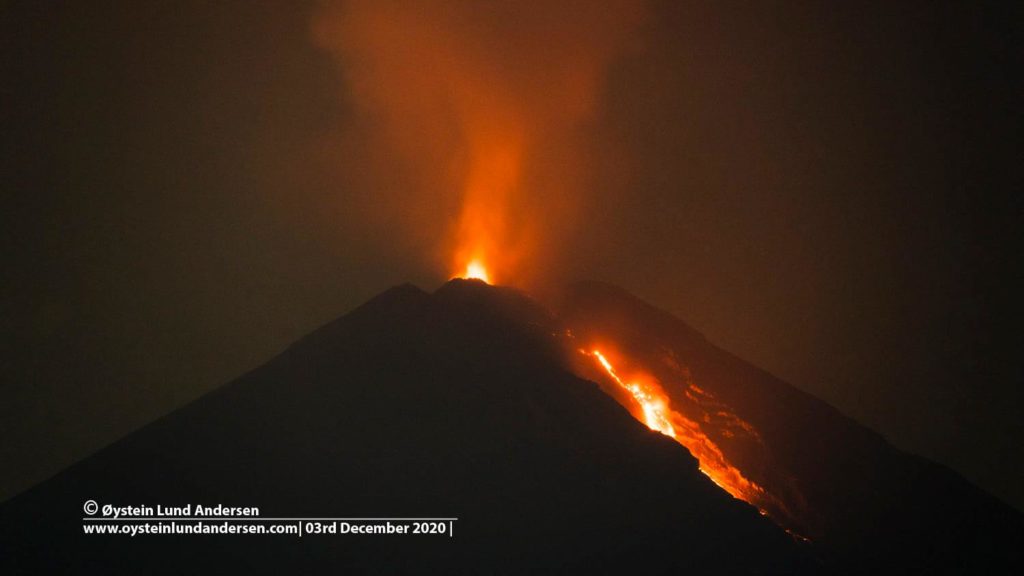 Level of activity level II (WASPADA). G. Semeru (3,676 m above sea level) is continuously erupting. There are explosive and effusive eruptions, causing lava flows towards the south and south-eastern slopes, as well as projections of incandescent rocks around the summit crater.
The volcano was clearly visible until it was covered in fog. A thin white smoke from the crater was observed, about 100 meters high above the summit. There was an avalanche of hot clouds with a sliding distance of 3.5 km towards Besuk Kobokan. There was an avalanche from the tip of the lava tongue up to 400-500 m towards Besuk Kobokan. The weather is sunny to rainy, with light to moderate winds in the North, North-East, East and South. The air temperature is around 21-27 ° C.

A moderate explosive-effusive eruption of the volcano continues. Ash explosions up to 23,000-26,200 ft (7-8 km) a.s.l. could occur at any time. Ongoing activity could affect international and low-flying aircraft. 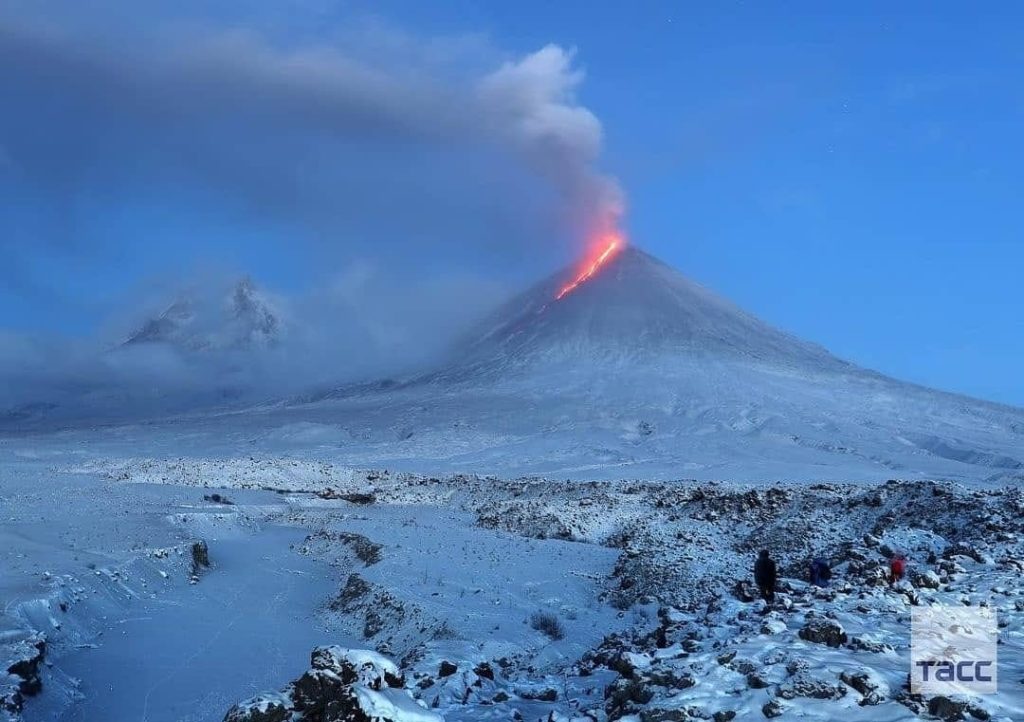 A moderate explosive-effusive eruption of the volcano continues, the Strombolian and Vulcanian activity is observing. The lava flow continues to move along Kozyrevsky chute on the southern volcanic flank. Satellite data showed a large bright thermal anomaly in the area of the volcano all week; gas-steam plumes containing some amount of ash rose up to 7 km a.s.l., and extended for 130 km to the northeast and northwest of the volcano all week. 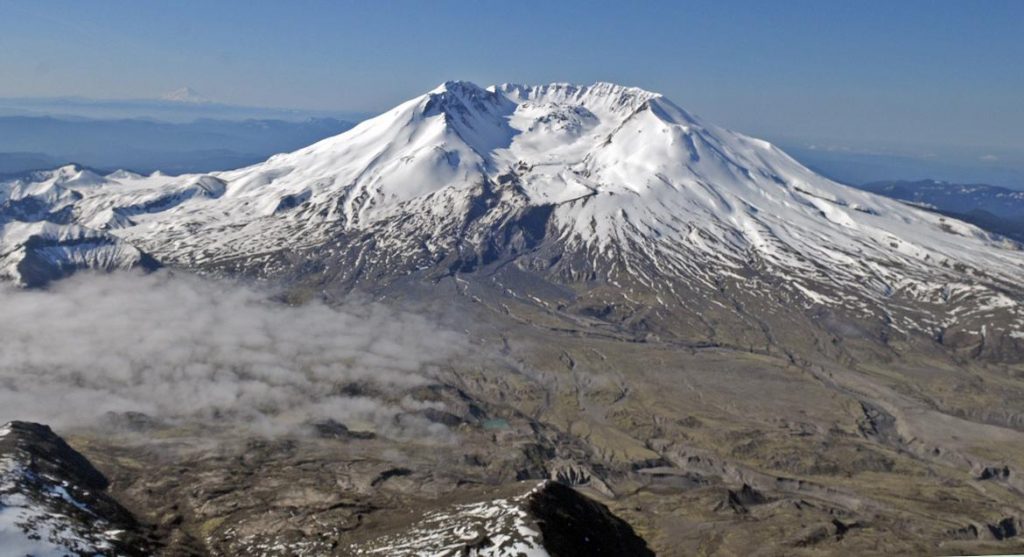 Recent Observations:
Over the past week earthquakes were located at Mount Rainier and Mount St. Helens, consistent with background activity at both volcanoes. Over the last week field crews worked at Mount St. Helens to make streamflow measurements and performed maintenance at a monitoring site at Mount Hood. 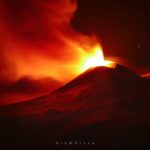 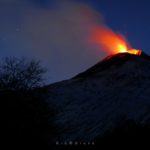