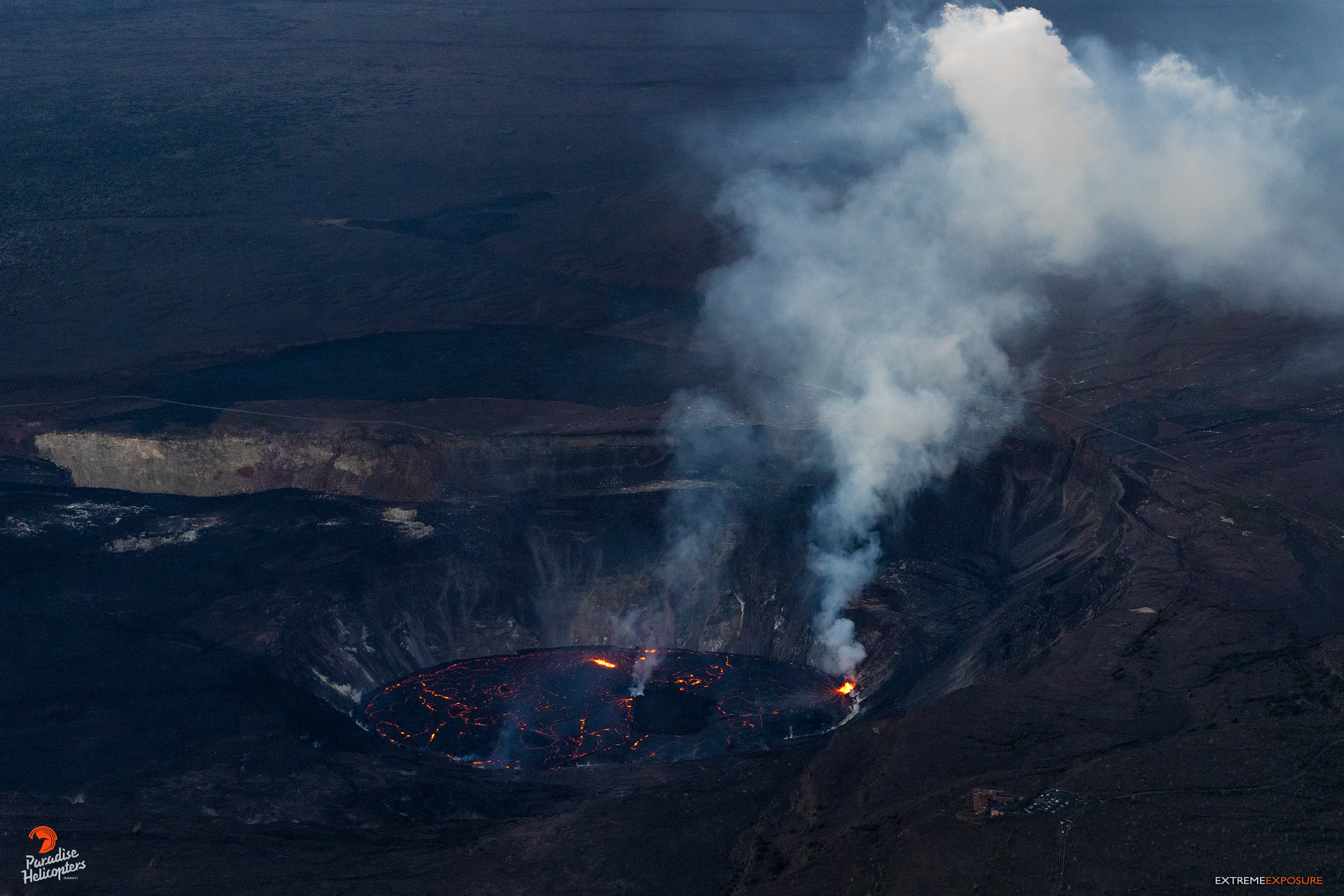 The eruption process of the Cumbre Vieja volcano may show processes of increasing and decreasing Strombolian activity. Emissions of volcanic bombs, a type of pyroclast several meters long that reached the base of the cone, were observed throughout the day yesterday. The measured height of the column of ash and gas reaches three kilometers, showing a more dispersed part, reaching a height of five kilometers.

Seismicity continues to be localized near the first recorded earthquakes, at depths between 10 and 5 kilometers. Earthquakes are also recorded at depths greater than 20 kilometers. In the last 24 hours, a few dozen earthquakes have been located, the largest of magnitude 3.6, which was felt with intensity III. Another somewhat more intense was also recorded yesterday, and high frequencies were recorded at some seismic stations near the lava delta. The deformations show in stations far from the eruptive center a slight downward trend, as in recent days, while in neighboring stations, they continue to show stability.

The Canary Islands Volcanological Institute (Involcán) has reported an increase in lava emission from the Cumbre Vieja volcano. « In the last minutes, the effusive activity of the eruption has increased considerably, » he noted at nine o’clock in the evening (Spanish Peninsula time) on Sunday. After the warning, part of the volcano’s cone collapsed, further increasing the release of magma, the agency said. “As night falls, the new flows become more visible,” adds Involcán. The Canary Islands Volcanic Emergency Plan Steering Committee (Pevolca) has ordered the evacuation of scientists and emergency personnel working in areas near the lava flows due to poor air quality. 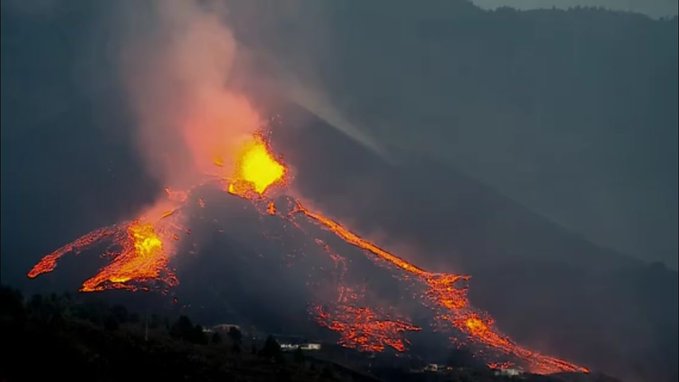 The main cone of the volcano of La Palma suffered in the afternoon of this Sunday evening a partial collapse of its structure while increasing its effusive activity, with the emission of fluid lava, according to the Volcanological Institute of the Canaries.
According to information provided by the forward command post, the partial collapse occurred at around 9:10 pm and, apparently, some of the eruptive vents joined.
A higher lava outflow is observed, but it crosses the same channel as so far and no new flows have been observed for this reason.
Carmen Lopez, of the National Geographic Institute (IGN), explained that episodes of this type have occurred and will continue to occur throughout the eruptive process.

Activity Summary:
Kīlauea volcano is erupting. Lava continues to erupt from multiple vents along the floor and western wall of Halemaʻumaʻu crater. As of this morning, October 3, 2021, all lava activity is confined within Halemaʻumaʻu in Hawai’i Volcanoes National Park. Seismicity and volcanic gas emission rates remain elevated.

Summit Observations:
Sulfur dioxide (SO2) emission rates remain high and were approximately 14,750 tonnes per day on October 2, 2021, which is higher than the previous day. Seismicity is elevated but stable. Summit tiltmeters continue to record deflationary tilt. 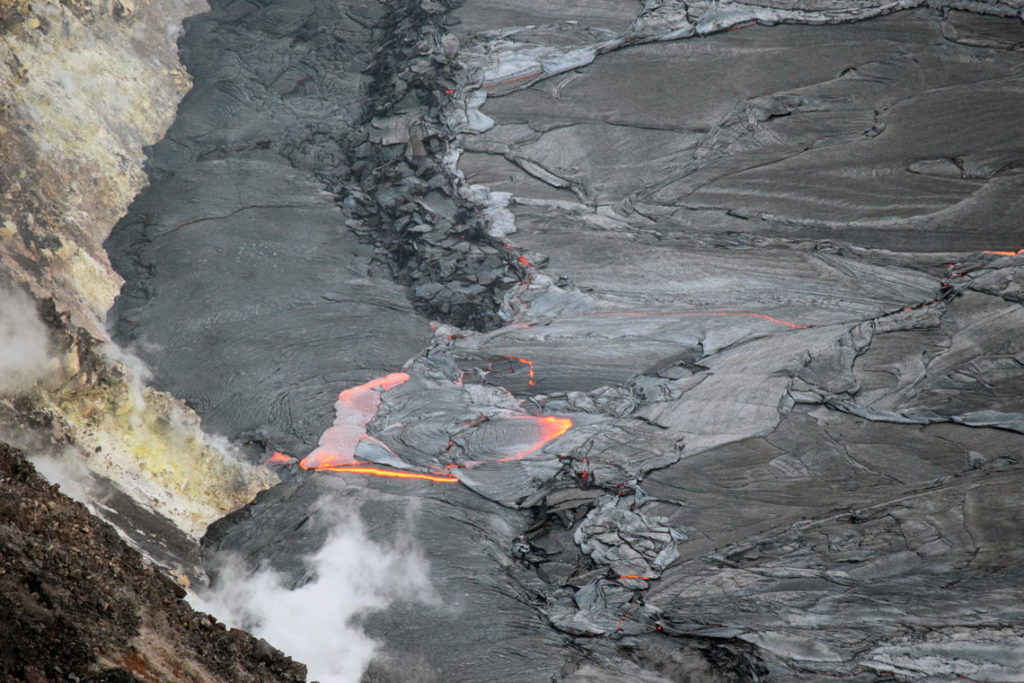 A telephoto image of the northwestern margin of the lava lake within Halema‘uma‘u crater, Kīlauea summit. An overflow of lava from the active lava lake (center) is covering a portion of the perched levee that has formed around the margin of the lake.

Halemaʻumaʻu Lava Lake Observations:
Lava continues to erupt from multiple vents within Halemaʻumaʻu. Over the past 24 hours, the lava lake level has risen over 1 meter (3.3 ft). In total, the lava lake surface has risen approximately 27 meters (89 ft) since the eruption started. The west vent continues to be the most vigorous source, with sustained lava fountain heights of 10-15 meters (33-49 ft). The lava lake has risen to the base of the west vent, around which a cone is being built. Other vents including a 35-meter-long (115 ft) fissure continue to be active in the central and southern parts of the lake, with sustained lava fountain heights of 5-10 meters (16-33 ft). Occasional fountain height bursts have also been observed over the past 24 hours. Due to the location of vents, the lava lake is not level across its surface. This morning, the west end of the lake is 1-2 meters (3.3-6.6 ft) higher than the east end, and the south end is approximately 1 meter (3.3 ft) higher than the north end. Localized and discontinuous crustal foundering continues (a process by which cool lava crust on the surface of the lava lake is overridden by less-dense liquid from below causing the crust to sink into the underlying lake lava). 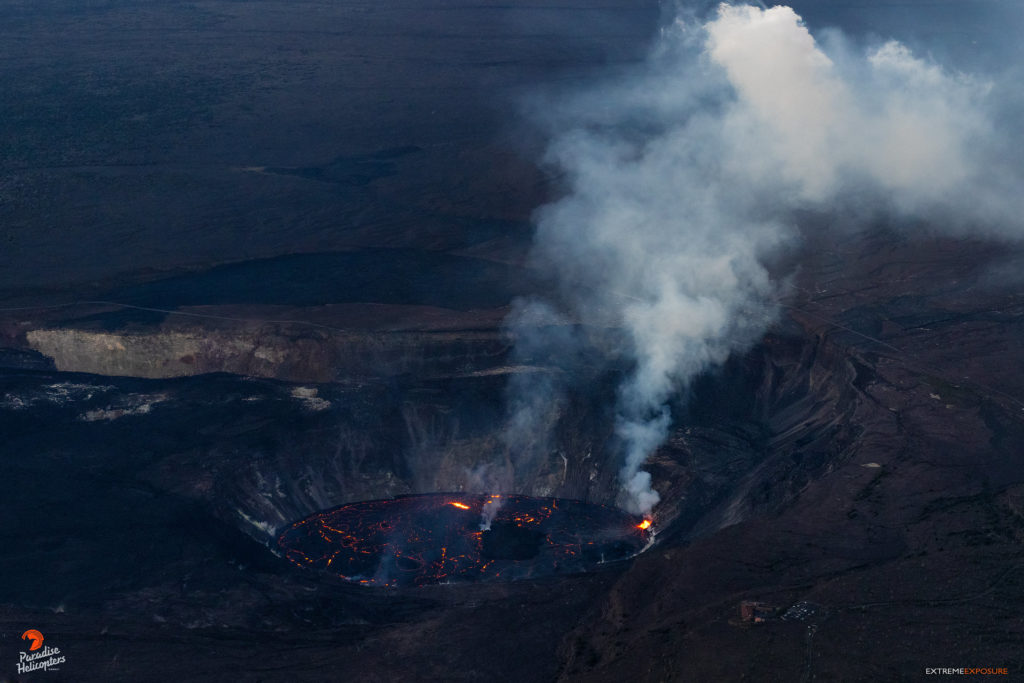 A view of Halema‘uma‘u’s lava lake as we approach from the north. The Jaggar Museum and the abandoned HVO facility are in the lower right.

East Rift Zone Observations:
No unusual activity has been noted in the Kīlauea East Rift Zone. SO2 and hydrogen sulfide (H2S) emissions from Puʻuʻōʻō were below instrumental detection levels when last measured on January 7, 2021. 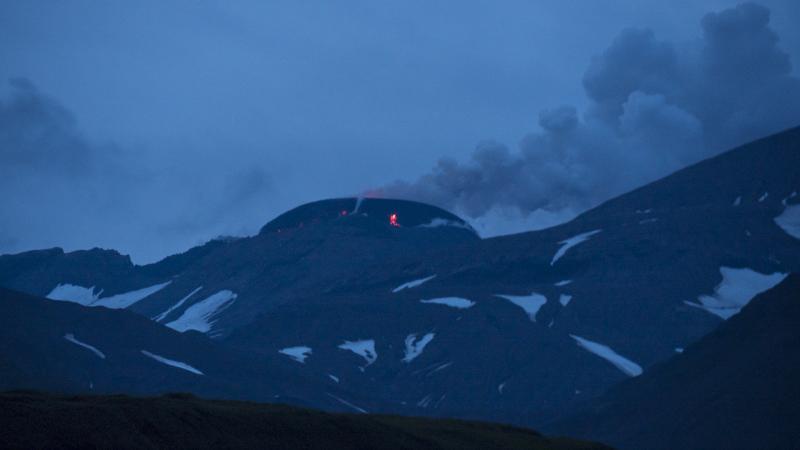 Seismicity remains slightly elevated with small earthquakes consistent with lava effusion continuing. No explosive activity or ash emissions have been detected in seismic, infrasound, or satellite data. Elevated surface temperatures were observed in clear satellite images over the past day. Satellite images show that the dome within the summit crater currently has dimensions of about 3940 ft (1200 m) east-west and about 3280 ft (1000 m) north-south. As the dome continues to grow, lava is spilling out of breaches in the crater to the south and southwest. These lava flow lobes are roughly 985 ft (300 m) and 1150 ft (350 m) long, respectively. The lobe going to the southwest is starting to split into two drainages and there is evidence that hot debris has cascaded downslope on top of snow field around 450 m past the end of the main flow.

Rains / lahars: No rain was recorded. 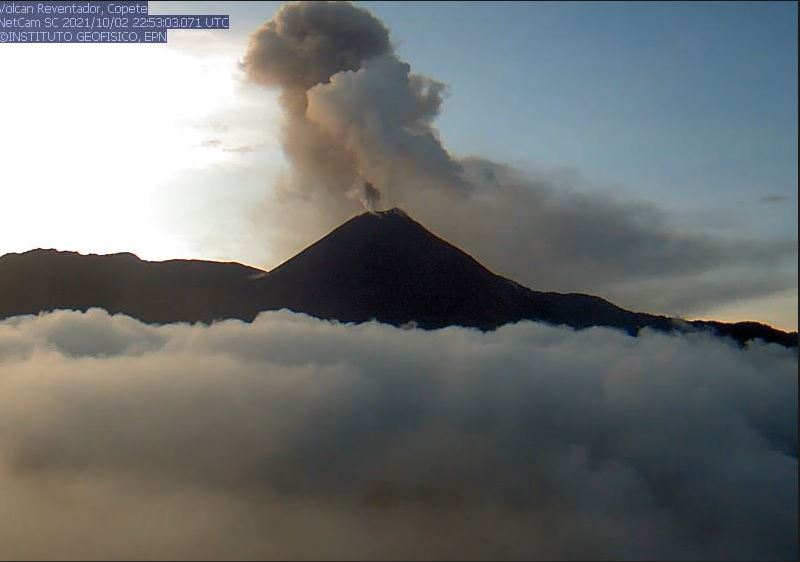 Emission column / ash:
Yesterday afternoon, the volcano cleared and an emission of ash at an altitude of 1000 meters above the level of the crater was observed in a westerly direction. The Washington VAAC reported 3 ash emission alerts with a height of 1,638 meters above the summit heading northwest and west in the past 24 hours.

Observation:
During the night the volcano was clear, it was possible to observe the incandescence at the top with the rolling of boulders on all sides of the volcano up to 700 meters below the crater. Later in the morning it became cloudy and it woke up clear, observing a release of steam, gas and ash 500 meters above the summit to the west, then darkened and the rest to ‘here

According to the webcam and the seismic station STG8, weak to moderate explosions are observed and recorded, accompanied by ash columns from 2800 to 3000 meters above sea level. (9,186 to 9,842 feet) which scattered south and southwest over 10 kilometers. Ash falls are recorded in the villages of San Marcos and Loma Linda Palajunoj and the Fincas in the region.

The lava extrusion is maintained, generating avalanches on the west and south-west flanks. Due to the unstable nature of the material, avalanches are generated, with the probability of generating moderate to strong pyroclastic flows, so one should not stay near or in the river beds near the slopes of the volcano. In the afternoon and at night, moderate and heavy rains continue, with the likelihood of continuing to generate lahars through the channels of the Nimá I, Nimá II, Tambor rivers, tributaries of the Samalá river, therefore it is recommended to take precautions. (Information in the bulletin BESAN-102-2021). 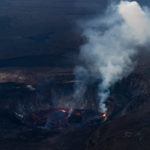 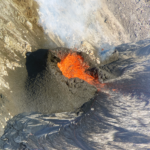