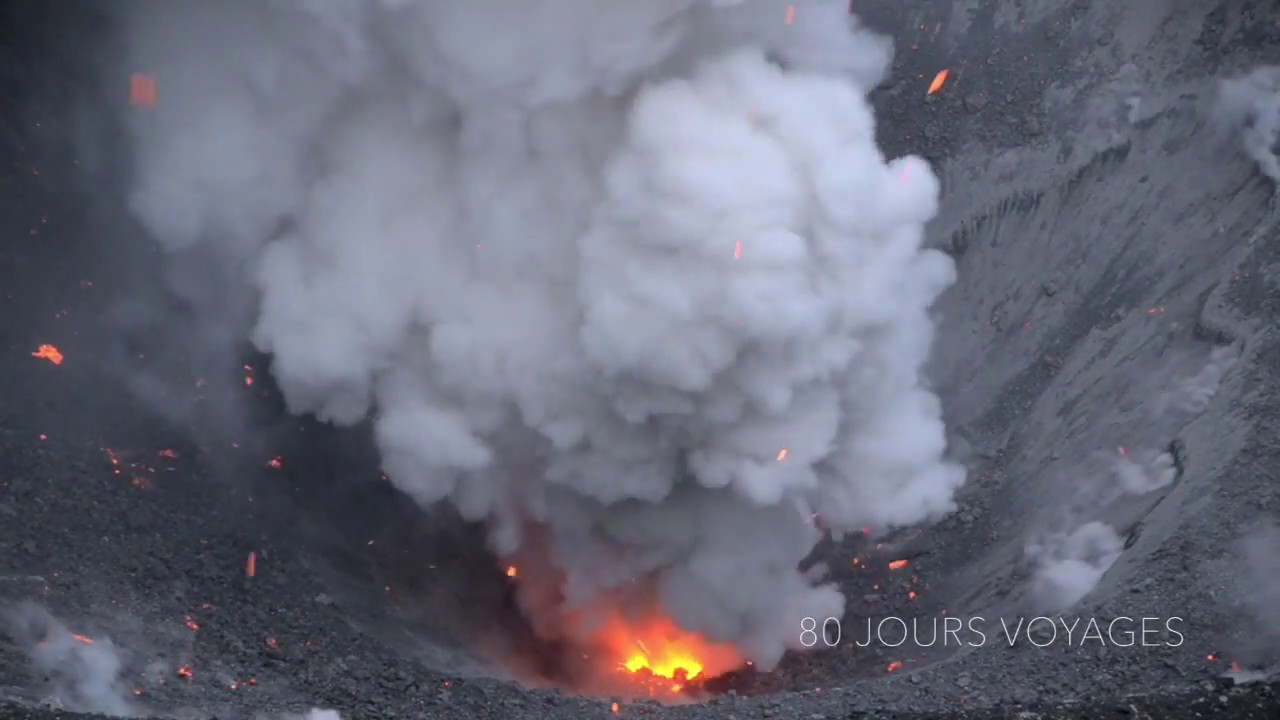 During this period, one hundred and seven (107) seismic events classified as volcano-tectonic (VT) were recorded, associated with fracturing processes of rigid materials. The event with the greatest energy obtained a local magnitude equal to M 2.2 and was located 5.5 km  West-northwest (ONO) of active crater El Agrio, 4.6 km depth.
Similarly, two hundred and sixty-six (266) earthquakes associated with fluid dynamics were recorded in the volcanic building, classified as Long Period Type (LP) events, with a reduced displacement value (DRC) of 2.9 . cm2. In addition, twelve (12) Very Long Period (VLP) earthquakes were recorded, with a maximum reduced displacement value of 20 cm2. 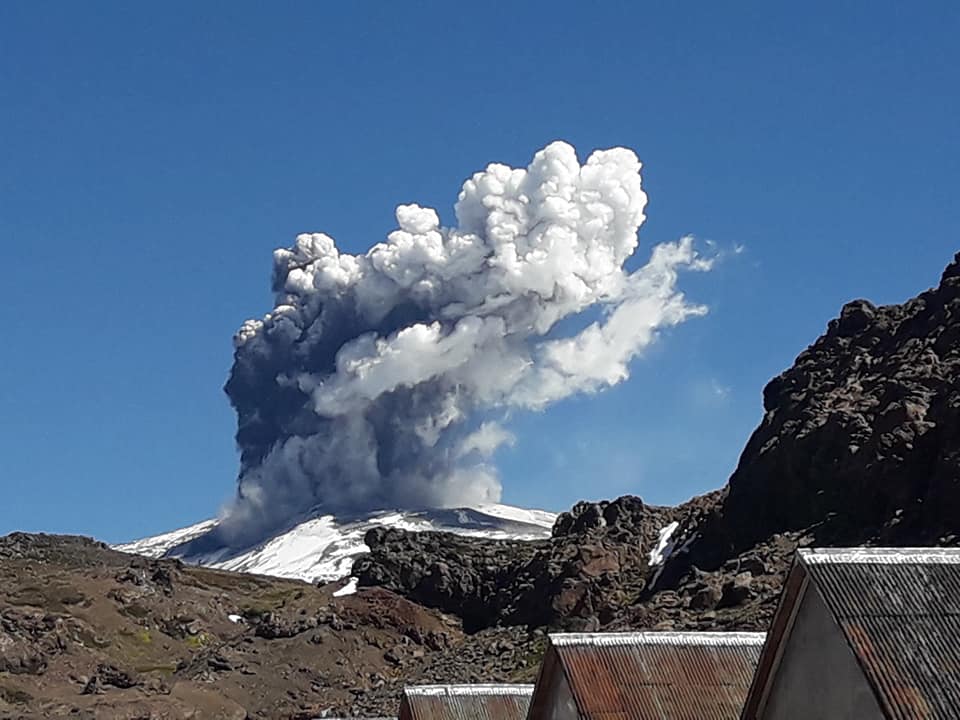 The series of continuous tremor showed oscillations in its amplitude between the values ​​of low and average intensity with dominant frequencies between 1 and 4 Hz mainly.
IP cameras installed near the volcano recorded a constant degassing of the active crater (El Agrio) at a maximum height of 1500 m with gray ash emissions and incandescence during the night period, when weather conditions made it possible to observe the volcano. .
According to the analysis of data obtained from four geodetic monitoring stations, there is almost no displacement of the volcanic building during the evaluated period. The same thing is observed in the lines of surveillance that cross the active crater. The calculated rates of change have a maximum of 0.12 cm / month, so there is no evidence of a significant deformation process associated with activity on the volcano.

Sulfur Dioxide (SO2) emissions from Differential Absorption Spectrometry (DOAS) equipment at Mellizas, located 5 km east-northeast of the active crater, had an average value of 1199 + / – 331 t / day, with a maximum value of 5042 t / day reported on July 22, which was associated with the registration of a thermal anomaly by MIROVA on July 23rd. SO2 emissions are considered moderate if one looks at the current state of the volcano. 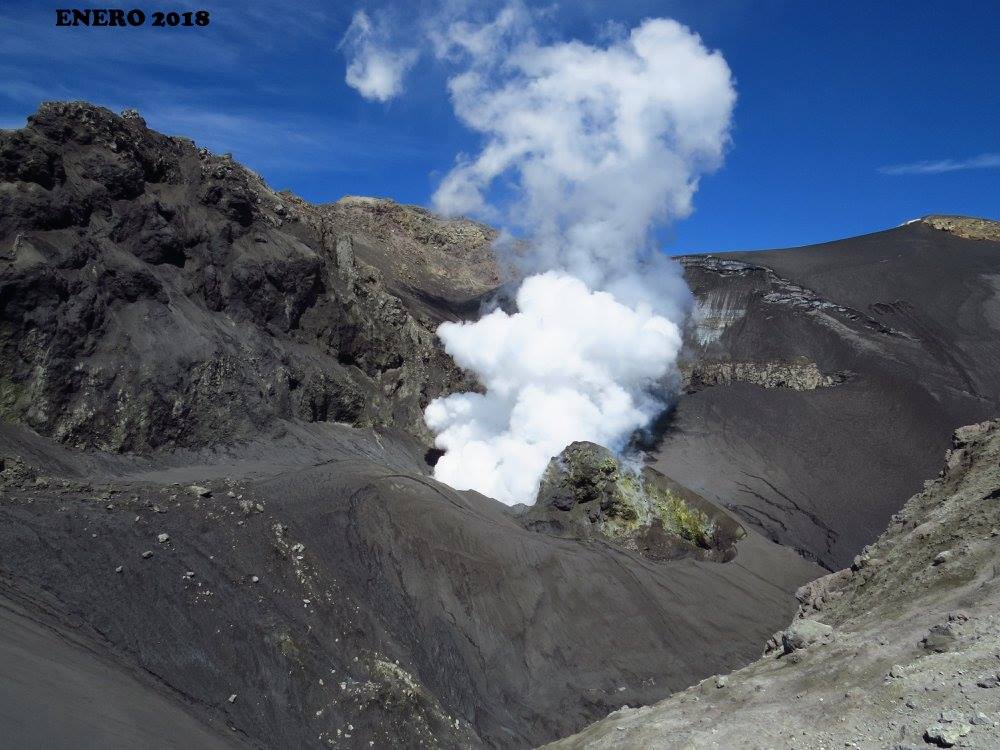 One (1) thermal warning was reported in the area associated with the volcanic building during the period considered, with a volcanic radiative power (VRP) of 1 MW on July 23, value considered low according to data processed by observation medium infrared. volcanic activity (MIROVA) (http://www.mirovaweb.it/) and near-real-time thermal monitoring of global hot spots (MODVOLC) (http://modis.higp.hawaii.edu/) .

As expected, ash emissions generated by the interaction of hydrothermal and surface magmatic systems occurred. In this activity setting, minor phreatic explosions can occur and evolve into continuous ash emissions or Strombolian activity, such as those recorded in previous years. The oscillating character in the activity is highlighted, in agreement with the instability implied by the hydrothermal component of the activity.

The level of activity of the volcano is maintained at the level:
■ YELLOW LEVEL (III): Changes in the behavior of volcanic activity

Following the activity of the CUMBAL VOLCANIC COMPLEX, the COLOMBIAN GEOLOGY SERVICE informs that:

Between July 31 and August 6, 2018, seismic activity recorded an increase of about two times that of the previous week, from 234 to 482 low energy events, with a predominance of earthquakes associated with movement. fluids inside the volcano.

When weather conditions permitted, it was possible to observe gas emissions from the El Verde fumarolic field located to the north-east of the volcanic complex with a direction of dispersion variable according to the wind at the summit.

Level II Activity Level (WASPADA). The Dukono (1229 m) continues to erupt. Since yesterday and until this morning, visually, the summit of the volcano could be observed clearly until it was covered with fog. Smoke from the main crater is white to gray, medium pressure, with a thick intensity up to 200 to 400 meters above the peak. The wind is blowing weakly towards the East.

According to the seismographs of August 11, 2018, it was recorded:
1 Eruption earthquake.
1 distant tectonic earthquake
A continuous tremor of maximum amplitude 0.5 to 8 mm (dominant value 2 mm)

Recommendations:
Communities around Mount Dukono and visitors / tourists should not move, climb or approach the Malupang Warirang crater within 2 km.

During an overflight of the LERZ this morning (August 11) two small ponds of lava were observed in the Fissure 8 cone. One pond is crusted over and stagnant, the other is incandescent and sluggishly convecting. A gas plume billows up from Fissure 8; low-level steaming from a handful of the other fissures (inactive) is intermittent. Lava is oozing at several points along the coastline creating wispy laze plumes. 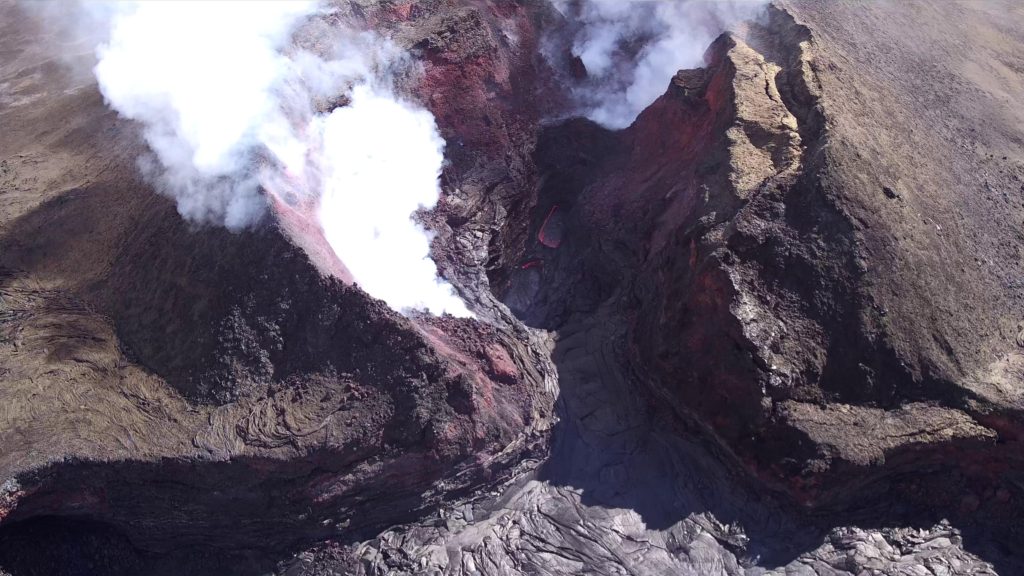 The UAS team (Unmanned Aircraft Systems) flew a mission over fissure 8 to assess conditions within the cinder cone. As shown, fissure 8 contains two small ponds deep within its crater. One pond slowly circulates with an incandescent surface while the other pond is stagnant with a crusted top.

Although the lull in LERZ activity continues, it is common for eruptions to go through periods of diminished output, or to pause completely, only to return with renewed vigor days or weeks later, or longer. Resumption of the activity on the LERZ could occur at any time, and residents should remain informed and heed Hawaii County Civil Defense messages and warnings. 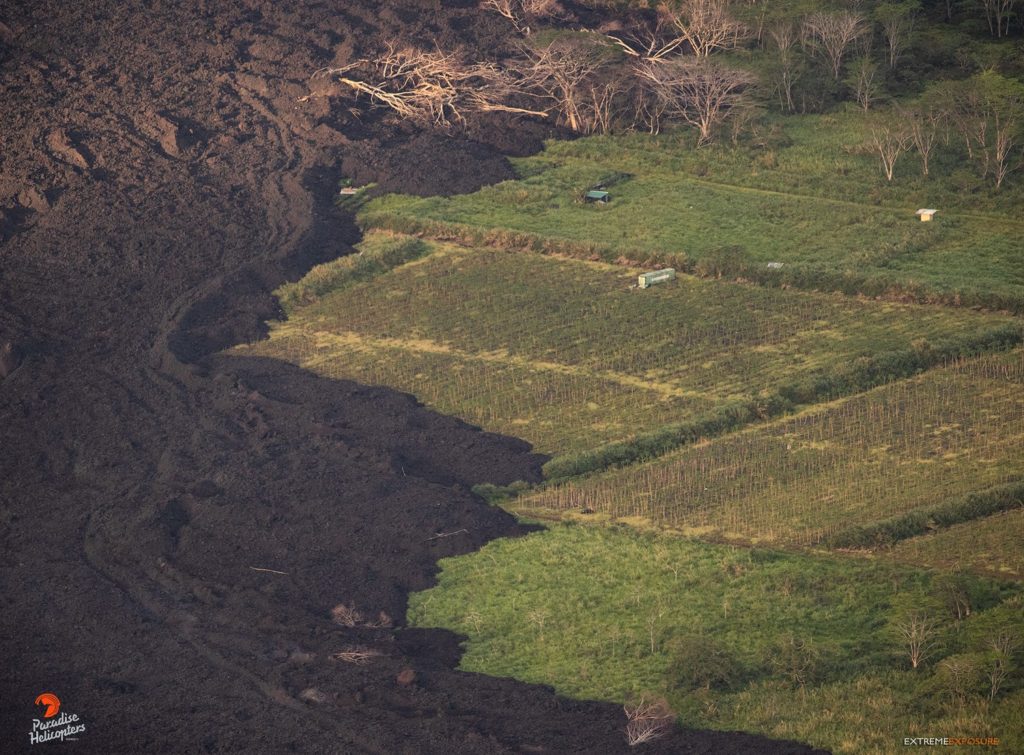 The thickness of the lava flow a’a on the north side of the channel is approximately 20 feet in this zone.

Despite the low emission rates, SO2 plumes were blown toward populated areas in east Hawai’i by SE winds on August 9, and many individuals reported detecting the smell of sulfur. Weather conditions contributed to this, but in addition, as the eruption vents cool down, small amounts of H2S are generated. The human nose can detect H2S at very low levels, adding to the overall perception of increased sulfur emission.

It has been over a week since the most recent collapse event at the summit on August 2. Summit seismicity continues to be low, with only 2-3 located earthquakes occurring per hour (maximum magnitude of M2.0). Summit deflation is negligible. 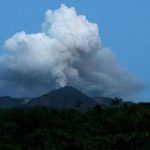