Ruapehu’s Crater Lake (Te Wai ā-moe) has a long history of heating and cooling, with each cycle usually lasting several months. In the most recent cycle, the lake temperature reached a high of 41°C in April and then cooled steadily to 12 °C by late September. Over the last two weeks, the lake has warmed slightly to 15 °C, which is a normal observation.

Since the lake started cooling, we have conducted four flights to measure the flux of volcanic gases through Crater Lake. We also collected lake water samples for further laboratory analysis. Results from recent gas flights show variations in H2S (hydrogen sulphide), CO2 (carbon dioxide) and SO2 gas (sulphur dioxide). The SO2 and H2S are relatively stable while CO2 is decreasing from a high in May this year. This is consistent with more geothermal, than magmatic chemical reactions, and is typical of activity at Mt Ruapehu over the past few years. Lake water chemistry has largely remained stable throughout this same period.

Crater Lake has two main submerged vents, namely North and Central vents. Observations of the lake over the last few months found that these vents were quiet. Late last week, our gas monitoring team observed clear upwelling and discolouration of the lake due to sediment mixing and bright yellow slicks of elemental sulphur over both vent areas.

These observations and measurements all indicate that the underlying vent areas are open to volcanic gases and geothermal fluids entering the lake.

The level of volcanic tremor intensity has been variable but has remained weak over the past three months, and small earthquakes continue to be located near the volcano.

None of these observations are unusual for Mt Ruapehu. All observations over the past months indicate that the volcano remains in minor volcanic unrest and at Volcanic Alert Level 1.

GNS Science and the National Geohazards Monitoring Centre continues to closely monitor Mt Ruapehu for further signs of activity. GeoNet monitors Mt Ruapehu via a network of seismic and acoustic sensors, GPS receivers, sensors in the lake and visits to the lake area, and gas flights.

The seismicity parameters associated with both the fracturing processes of rigid materials (VT types) and the fluid dynamics within the volcanic complex (LP and TR types) or surface activity (EX type) have remained unchanged. levels similar to those of recent periods.
The highest energy VT-type event, with a local magnitude (ML) of 2.4, was located 1.3 km south-east (SE) of the active crater with a depth of 1.9 km.
The images provided by the surveillance cameras allowed us to observe that the dynamic of effusive and explosive activity continued during this fortnight. The effusive activity is characterized by the extrusion of lava, which accumulates at the level of the crater and advances outside the northern limit of the active crater, generating a flow which to date reaches 615 m from the edge of  this. The explosive activity exhibited maximum column heights of 1500 m, with a moderate content of particles and a higher content of volcanic gases. Some isolated episodes showed a high content of reddish pyroclasts.
When weather conditions permitted, it was possible to record the nocturnal incandescence.
According to data obtained from the network of GNSS stations and inclinometers installed on the volcano, it is observed that the tendency for the relaxation of the system is maintained, with minor variations. 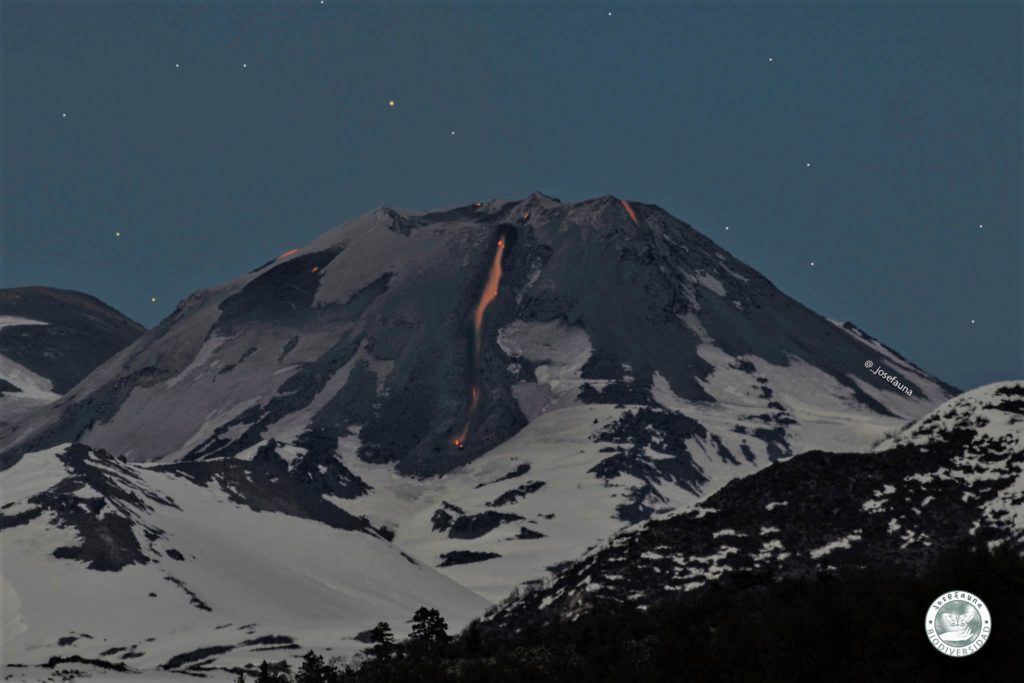 13 thermal alerts were recorded in the area with a maximum value of 6 MW, a value considered low.

The impacted area is considered the closest to the crater with a radius of 2 km.

CONCLUSIONS
The eruptive cycle of the Nevados de Chillán volcanic complex continues to evolve regularly, with the advance of the lava flow observed on the northern slope, added to the slight increase in the dimensions of the lava dome housed in the crater, corroborated by satellite images. .

Additionally, data from GNSS stations showed some minor downward variation during this period. However, the recording of seismicity associated with the dynamics of fluids and explosions, thermal alerts, and recording of degassing and low height incandescence are consistent with the development of this type of surface magmatic body.

The current process is considered to be part of an intermittent eruptive dynamic with the emission of magmatic matter towards the surface and with a low level of explosiveness, it does not show signs which suggest for the moment a greater destabilization.

The Geophysical Institute of Peru (IGP) reports that the eruptive activity of the Sabancaya volcano remains at moderate levels; that is, with the continuous recording of explosions with columns of ash and gas up to 3.9 km high above the top of the volcano and their resulting dispersion. Therefore, for the following days, no significant change is expected in the eruptive activity.

The IGP recorded and analyzed the occurrence of 2027 earthquakes of volcanic origin associated with the circulation of magmatic fluids under the Sabancaya. In addition, an average of 34 explosions was recorded daily. During this period, Volcano-Tectonic (VT) earthquakes were located mainly in the North-East and North-West of Sabancaya. 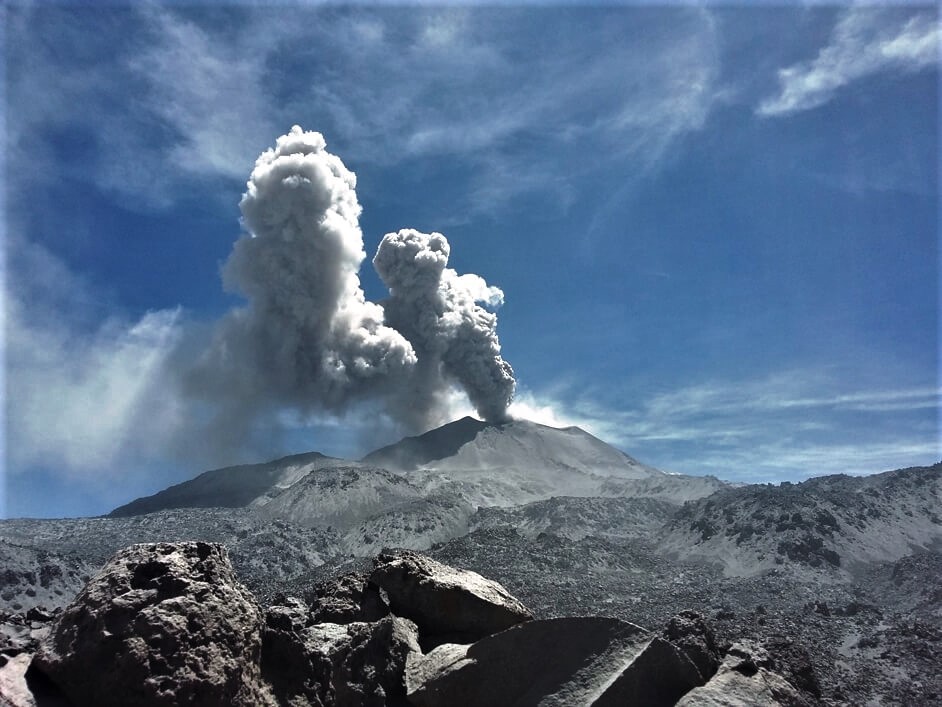 These presented magnitudes between M1.0 and M2.9. The most representative earthquake (M2.9) was recorded on October 11 at 7:25 a.m., 16 km northwest of Sabancaya and 9 km deep.
The monitoring of the deformation of the volcanic structure, using GNSS techniques (processed with fast orbits), does not present any significant anomalies; however, a slight deflation (contraction) of the south-eastern flank of the Sabancaya has been observed since October 3. Visual surveillance made it possible to identify columns of gas and ash up to 3.9 km altitude above the summit of the volcano, which were scattered towards the South-East, East, South-West and West sectors of the volcano. Sabancaya. The towns of Lluta and Huanca reported a slight impact due to falling ash. Satellite monitoring has identified the presence of 4 thermal anomalies with values ​​between 5 MW and 24 MW, associated with the presence of a lava body on the surface of the volcano’s crater. 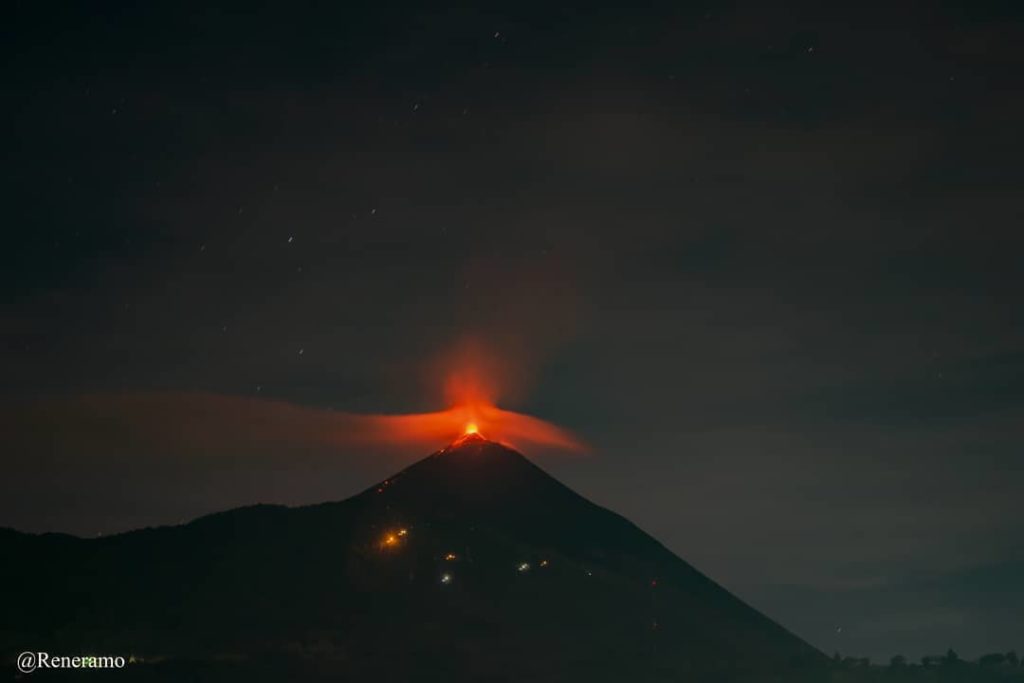 Activity:
Strombolian activity continues with weak to moderate explosions that lift volcanic material to heights of 75 to 125 meters above Mackenney Crater. This activity is accompanied by the sounds of locomotives sporadically without producing rumblings or sensitive shock waves in the communities near the volcano. There is a degassing of water vapor and other white to blue magmatic gases, rising 300 meters above the crater and moving south. The lava flow reported yesterday on the northern flank remains active over a length of about 160 meters, while the westward lava flow has calmed down. New lava flows can be expected to emerge over the next few hours or days. The PCG and PCG5 stations record a constant tremor due to the rise of magma and gases towards the surface. The recommendations of the special BEPAC bulletin n ° 92-2020 remain valid. 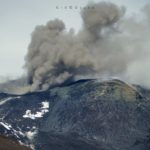