The Geophysical Institute of Peru (IGP) reports that the dynamic behavior of the Ubinas volcano remains at low levels. Therefore, in the short term, no eruptive activity is planned for the volcano, so that the population can exercise its activities normally according to government directives and the state of health emergency.

Between April 4 and 10, the IGP recorded and analyzed a total of 48 seismic events associated with the dynamic behavior of the Ubinas volcano, with the predominance of seismic signals of the Volcano-tectonic (VT) type, related to the fracturing of rocks inside the volcano. 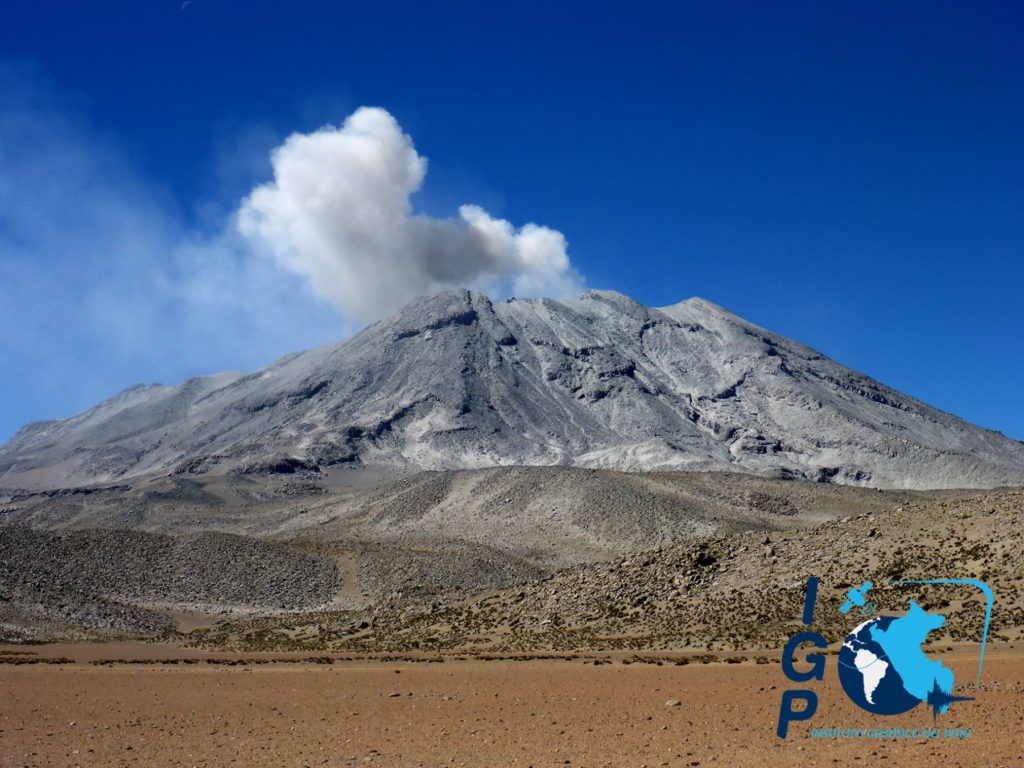 During May 9 and 10, there was a slight increase in the number of TV-type signals, with an average recording of 6 earthquakes per day of magnitude less than M1.7.
Surveillance cameras recorded light and sporadic emissions of volcanic gases and water vapor, with heights less than 300 m above the summit of the volcano.

RECOMMENDATIONS
It is recommended to decrease the volcanic alert level from orange to green.
Do not approach a radius less than 3 km from the crater of the volcano.
Do not neglect preventive actions in the event of a possible increase in volcanic activity.

In light of the monitoring data, it is underlined:
1) VOLCANOLOGICAL OBSERVATIONS: Strombolian activity in the crater of Voragine with periodic emission of ashes. Strombolian activity with occasional ash emissions from the New Southeast Crater. In general, the intensity of activity in the different craters has changed from day to day, with large fluctuations even daily.
2) SEISMOLOGY: weak seismic activity due to fracturing; amplitude of the variable volcanic tremor in the low-medium-high levels.
3) INFRASONES: Animated infrasound activity from the afternoon of May 7.
4) DEFORMATIONS: The Etna soil deformation monitoring networks have not shown any significant variation to report during the last week.
5) GEOCHEMISTRY: The flow of SO2 is at a medium-low level. The values ​​of the soil CO2 flux are medium-high values ​​with a decreasing trend which started in the first days of May. The partial pressure of dissolved CO2 does not show significant variations. The C \ S ratio recorded in discrete mode (sampling carried out on May 8) at the Voragine crater is at high values ​​consistent with the activity recorded in recent days
6) SATELLITE OBSERVATIONS: The thermal activity in the summit area is at a moderate level. 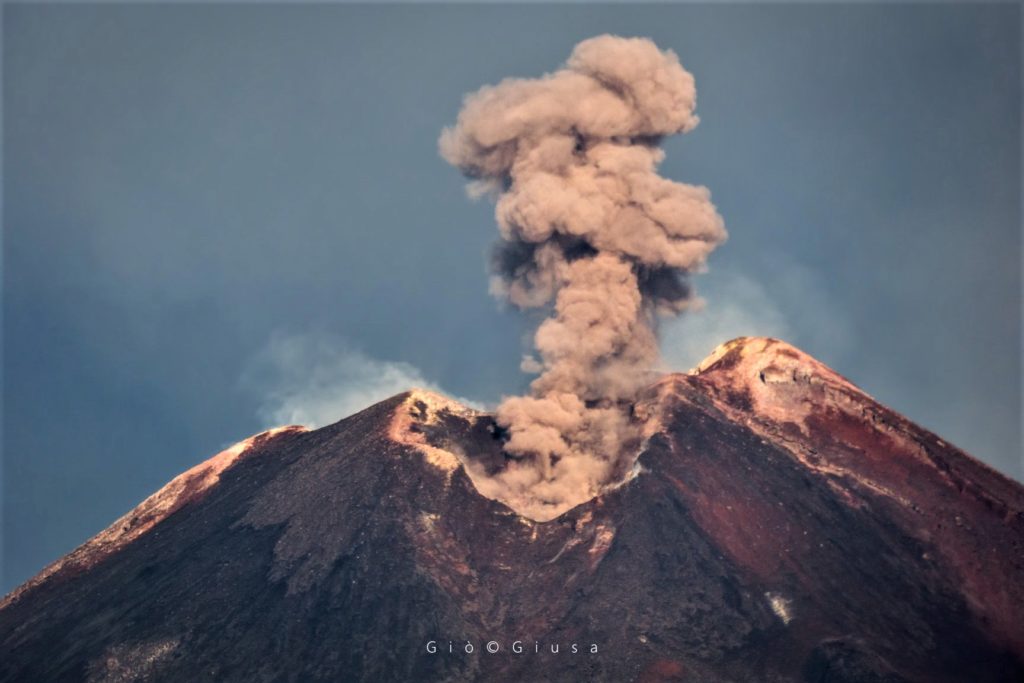 VOLCANOLOGICAL OBSERVATIONS
During the week, monitoring of volcanic activity in the summit craters of Etna was carried out by analyzing images from the network of surveillance cameras from the INGV Catania section, Etneo Observatory (INGV-OE) and through various inspections carried out by INGV-OE staff (Andronico D., Coltelli M., De Beni E., Greco F.), on 5-8 and 9 May. The eruptive activity was produced by the crater of Voragine and the New Southeast Crater. In particular, on May 5, an increase in ash emissions from the New Southeast Crater was recorded, this pulsating activity formed a plume of ash diluted in the South-Southeast direction. This activity is probably linked to a morphological variation visible in Figure 3.4 (boxes C1 and C2), where we observe a widening of mouth number 3 in favor of mouth number 2. Finally on May 10, there was an increase in the eruptive activity of the New Southeast Crater with continuous Strombolian activity and launch of products beyond the edge of the crater. Some blocks have fallen, partly accumulating on the edge of the crater, others have rolled along the slopes. In addition to the eruptive activity of the New Southeast Crater, there has also been an increase in activity in the Voragine crater, with the launch of ballistic products on the edge of the crater. After a few hours, this activity will see a significant decrease in the strombolian activity of the New Southeast Crater, where there was still a strong degassing, while the Voragine crater still had an explosive activity with less intensity and frequency than previous hours. 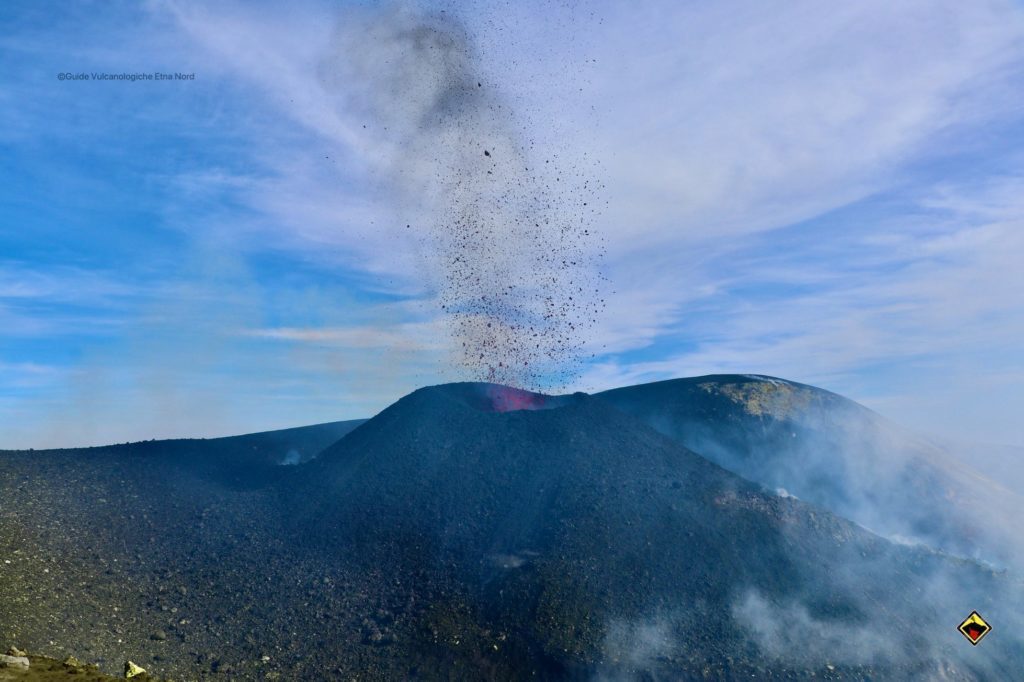 In particular, on May 5, the explosive activity in the Voragine crater was relatively light and very discontinuous. Silent or almost ash emissions, rarely associated with the explosion of incandescent flaps, were repeated at intervals of a few minutes to tens of minutes exclusively from the main cone. Bombs of different sizes were found on the south terrace of the Bocca Nuova crater, probably linked to the explosion that occurred on the night of May 3 to 4 and reported in the last weekly bulletin. During the reconnaissance on May 8, the activity of the main cone remained almost unchanged, with isolated and modest ash emissions, of an intensity similar or lower than those observed on May 5. However, there was high explosive activity on the March 9 cone (the one east of the main cone),. The explosions produced a lot of ash but also abundant coarse matter of dimensions up to the meter, with a frequency of 1 every 15-20 minutes, which was scattered both on the western edge of the Voragine and on the terrace B of the Bocca Nuova crater. We found a carpet of lithic blocks and dense juvenile bombs, average size less than 15-20 cm. 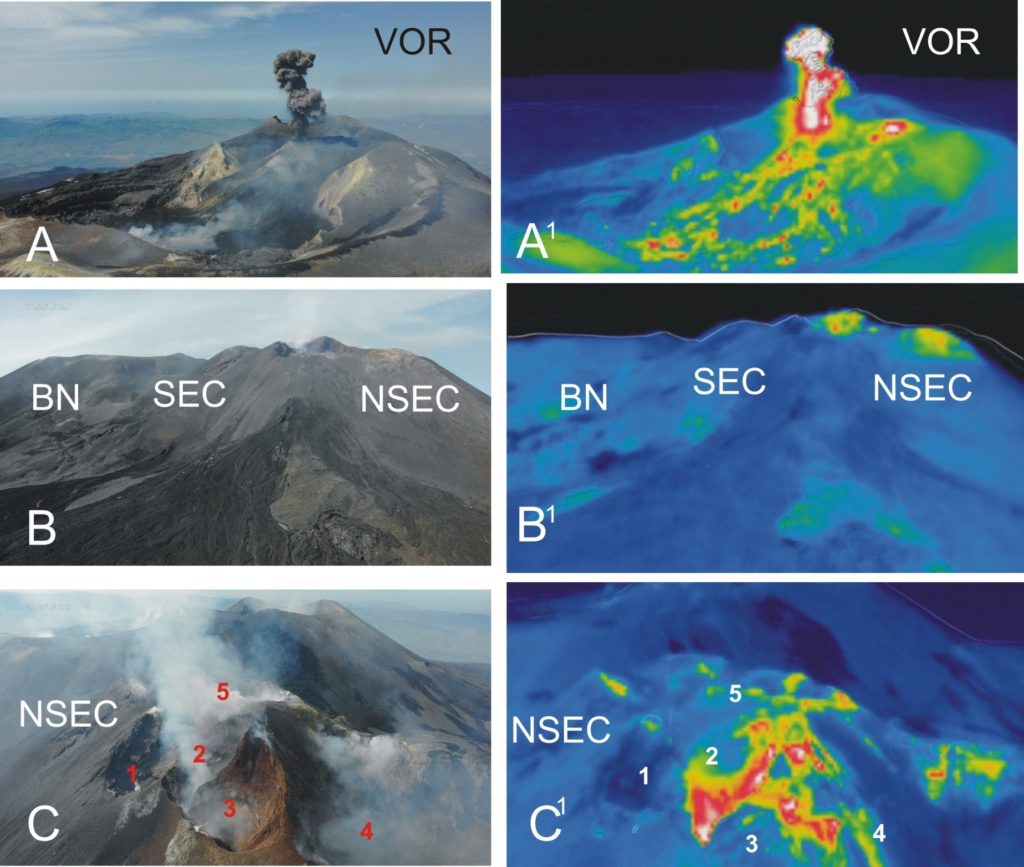 During the May 09 inspection of the summit craters, images were taken by the drone group. From the images taken by drone during the inspection of the summit craters on 09 May 2020, the corresponding thermal images are visible on the left. A – A1: Bocca Nuova and Voragine seen from the South, there is an explosion with the growing cone inside the crater of Voragine in the East, it is another active mouth. B-B2: Bocca Nuova, South-East crater and New South-east crater seen from the South-East, in the thermal image there are two thermal anomalies, the first further west at « the mouth of the saddle « between SEC and NSEC, the second east of » panettone « . C-C1: detail of the mouths of the NSEC taken from the South, two active are clearly recognized (2 and 3), intensely fumarolic and which during the inspection emitted small quantities of reddish ash. … / …

SUMMARY
Earthquake activity increased Sunday and Monday in the vicinity of Lōʻihi seamount, the youngest Hawaiian volcano located approximately 35 km (21.7 mi) southeast of Pāhala, at a water depth of ~1 km (~3300 ft) below sea level. There is no indication that a submarine eruption has occurred and there are no significant hazards of concern to the Island of Hawaiʻi at this time.

OBSERVATIONS
Beginning about 3:00 a.m. HST on May 11, 2020 and continuing through the morning of May 12, HVO detected more than 100 earthquakes beneath Lōʻihi, including 79 magnitude-2 (M2) and 19 magnitude-3 (M3) and above. This is a significant increase above long term background rates of fewer than 3 earthquakes per day at Lōʻihi, generally with magnitudes less than 2 . The number of earthquakes peaked at 14 per hour between 1 and 2 pm on Monday afternoon and decreased thereafter. Since the early morning hours of May 12, earthquake rates have been less than 4 per hour. 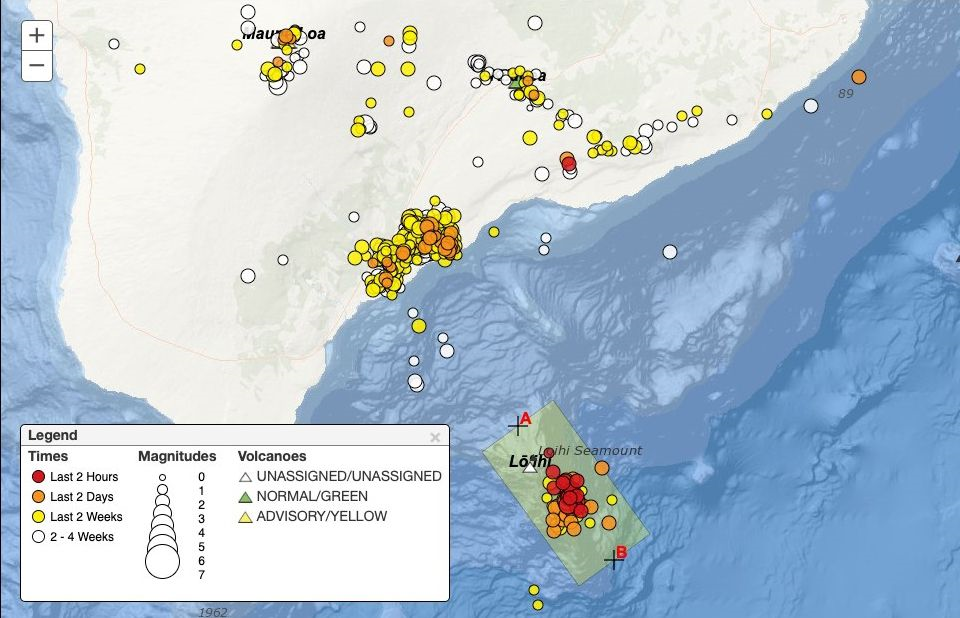 INTERPRETATION AND HAZARD
This swarm may represent a brief magmatic intrusion or movement of magmatic fluids within the volcanic edifice . Although the swarm appears to have diminished in intensity, if earthquakes become shallower, it could lead to the beginning of a submarine eruption, similar to what occurred in 1996.

An eruption of Lōʻihi, if it were to occur, may cause partial draining of its summit magma chamber and summit collapse, as happened in 1996. Significant, sudden changes to the volcano’s surface could displace large volumes of ocean water, which, if large enough, might generate very small local tsunami waves . Earthquakes of magnitude 4 and above could occur if the swarm were to intensify and these may be felt on the Island of Hawaiʻi.

If an eruption or stronger earthquakes occur, very small tsunami waves may affect southeast shores of the Island of Hawaiʻi. Relatively low-energy, steam- and gas-driven explosions can occur at the depth of Lōʻihi, but with limited local effects on the volcano and surrounding ocean water.

According to the monitoring of the activity of the CHILE VOLCANOES and CERRO NEGRO, the COLOMBIAN GEOLOGICAL SERVICE (SGC) reports that:

Between May 5 and May 11, 2020, seismic activity in the Chiles – Cerro Negro volcano region continued, linked to rock fractures in volcanic buildings. There was no significant change in terms of seismic occurrence, however, compared to the previous week, a significant increase in the released seismic energy was observed, mainly due to the occurrence of earthquakes recorded on May 8 at 6:23 p.m. and 6:27 p.m., which reached magnitude values on the Richter scale of 2.8 and 3.2 respectively, both reported to be felt by residents of Resguardo de Chiles. 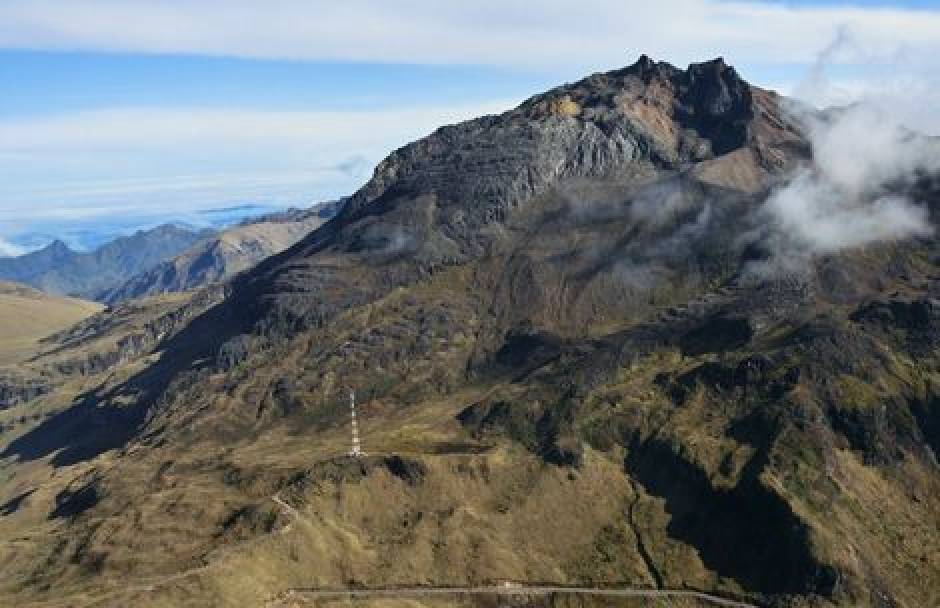 In addition, on May 11, two earthquakes were recorded with local magnitude values of 2.7 and 2.2, however, there were no reports that they were felt. In general, seismicity was localized to the south and south-east of the Chiles volcano, at epicentral distances less than 6 km and at depths up to 10 km from its summit.

The volcanic deformation record is kept at one of the monitoring stations. The other geophysical and geochemical monitoring parameters did not show significant variations. 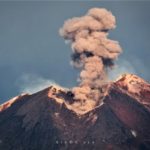 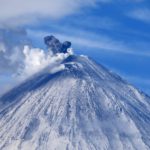