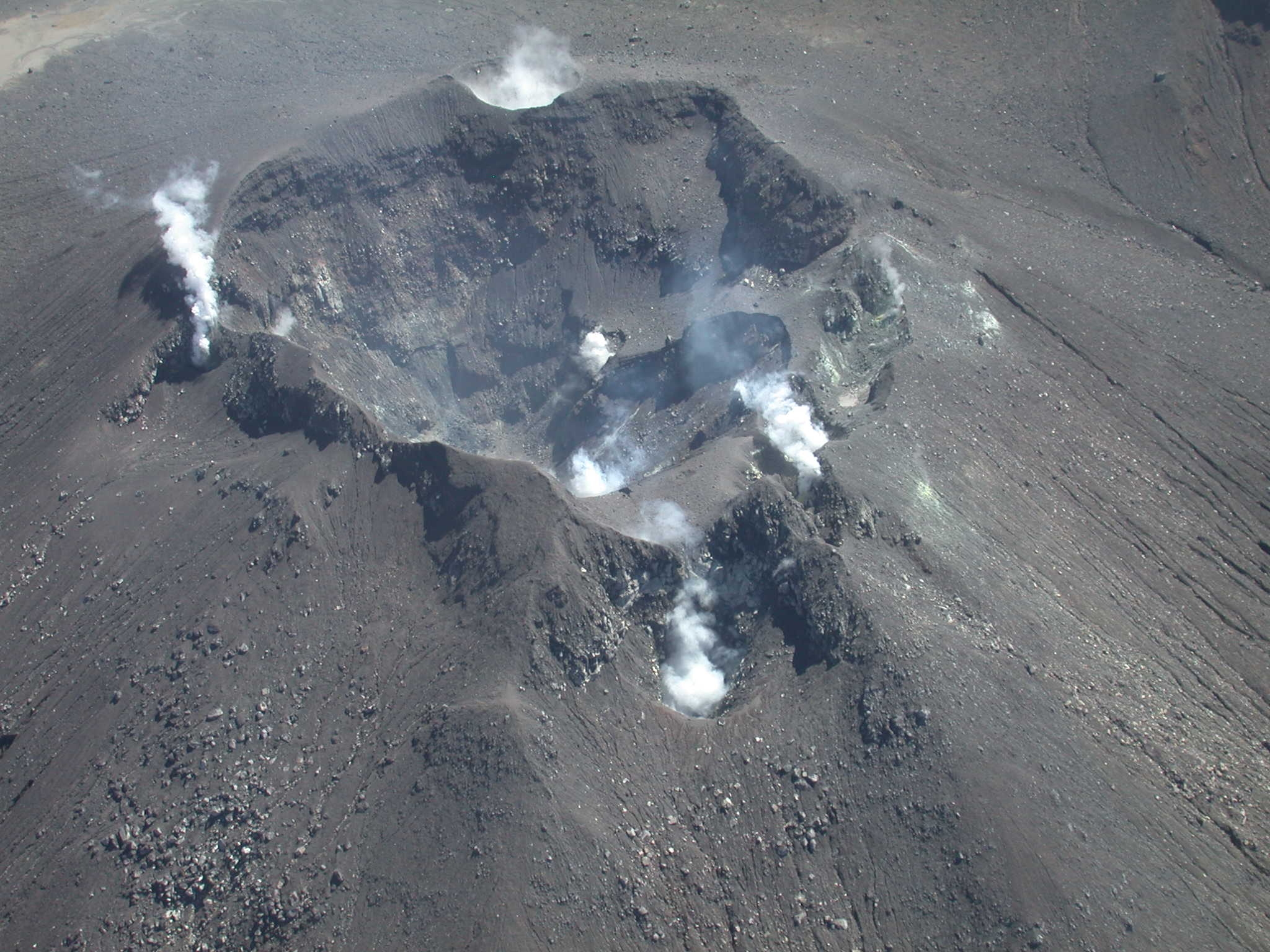 Following the activity of VOLCAN GALERAS, the COLOMBIAN GEOLOGICAL SERVICE informs that:

During the assessment period, between 7 and 13 August 2018, the activity of the Galeras volcano showed similar behavior to that reported the previous week. The persistence of earthquakes associated with rock fracturing (volcano-tectonic events), scattered around the volcano, with magnitudes less than M 2.2 and depths up to 11 km (depths relative to the average of the volcano). No events were reported as felt this week. 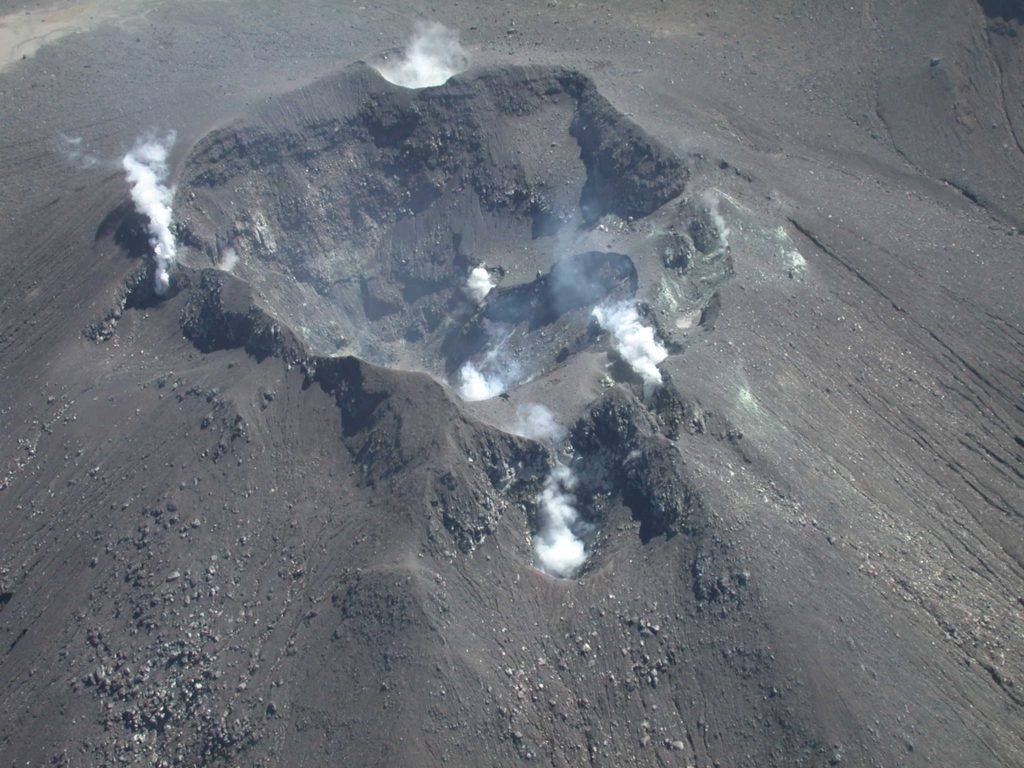 When weather conditions permitted, it was possible to observe gas emissions from the main fumarole fields on the top of the active cone showing a white color with low pressure, reaching varying heights and dispersion directions the direction of the prevailing wind. The average temperature in the Deformo fumarole field was 83.7 degrees Celsius.

The other parameters of the geophysical and geochemical type of volcanic monitoring of Galeras do not record any variations showing a change in the activity level of the volcano.

The COLOMBIAN GEOLOGICAL SERVICE remains attentive to the evolution of the volcanic phenomenon and will continue to inform in a timely manner the observed changes.

Summary:
The Sangay volcano, located in the province of Morona Santiago, 40 km north-west of the city of Macas, presented a new eruptive phase from 8 August 2018, after 9 months since the end of its last eruptive phase, in November 2017. The surface activity is characterized by low energy ash emissions that rise up to 2.3 km above its crater and the possible presence of a new lava flow on the east flank. South East . This low intensity activity is typical of the Sangay volcano and is not a threat outside the volcanic cone. Given the direction and speed of the wind, ash emissions could cause small ash falls west of the volcano, in uninhabited areas and cross some of the country’s air routes. 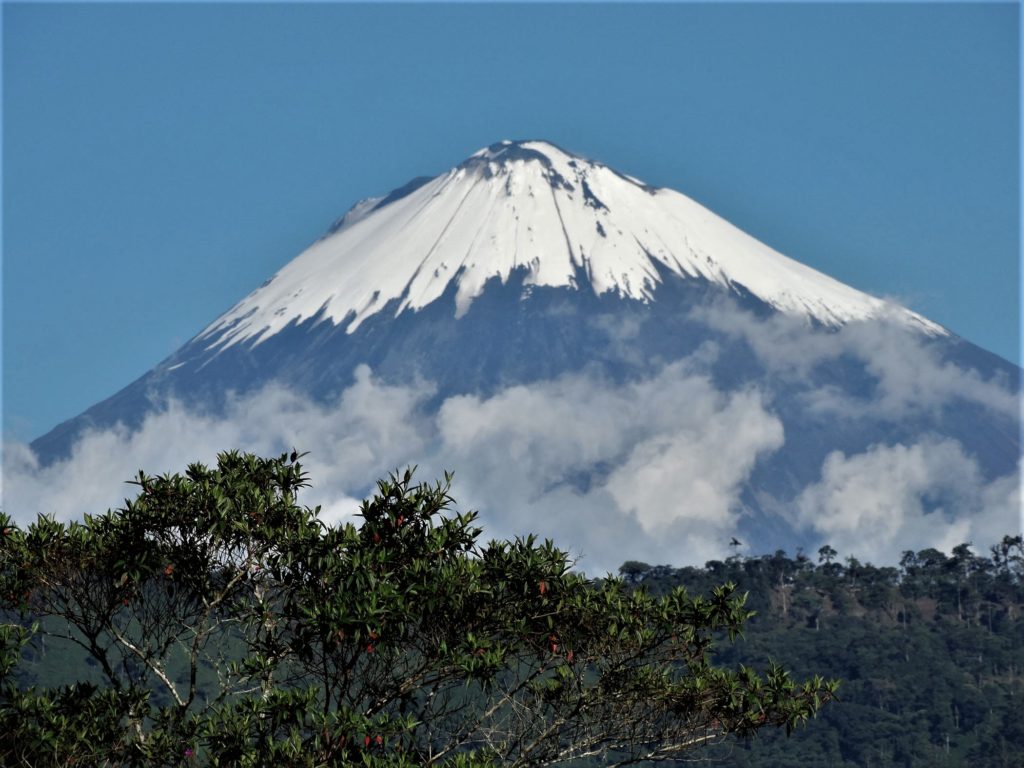 Satellite observations.
Ash clouds:
The Washington Volcanic Ash Warning Center (VAAC) has reported observations of two ash clouds in recent days. On August 8, 2018, an ash emission was detected at approximately 4:00 pm TL, at an altitude of approximately 5750 meters above sea level (500 meters above the crater) and heading south-west ( Fig. 1). Later, on August 11, 2018, an ash emission was detected around 3:00 pm TL, at a height of about 7570 m (2300 m above the crater) and moving west-northwest. (Fig. 1) Prior to this activity, the last ash clouds detected by the VAAC date from October 13, 2017.

Thermal alerts:
Infrared (thermal) sensors aboard different satellites in orbit around our country have detected the presence of certain thermal anomalies on the Sangay volcano on August 14, 2018.
The FIRMS system detected 1 thermal anomaly on August 14, located in the lower part of the east flank of the cone (Fig. 2). For its part, the MIROVA system reports two weak thermal anomalies, of 9 and 7 MW at dawn of August 14, located towards the North and North-East flanks. The satellite images of GOES 16 show a persistent hot spot between 06:00 and 06:30 TL on the volcano on August 14th. The presence of these thermal anomalies confirms that the volcano has initiated a new eruptive phase. In recent months, we do not have seismic or acoustic records due to technical issues. 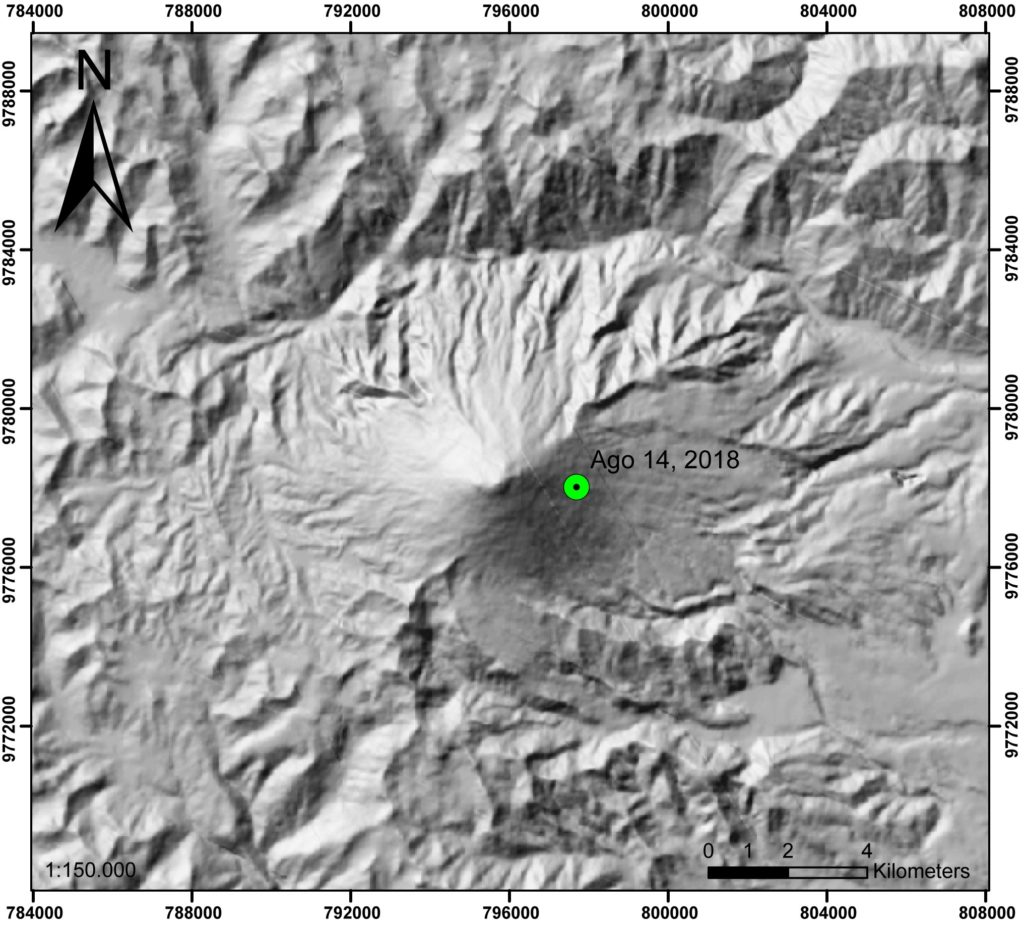 Direct observations:
ECU911 provided an image of the volcano from the city of Macas, taken this morning at 05:49 TL; it shows the presence of an incandescent in the upper part of the volcano. Since the location is the same, it is assumed that, as in the previous cases, a lava flow is emitted by the Ñuñurco dome (Fig. 3). 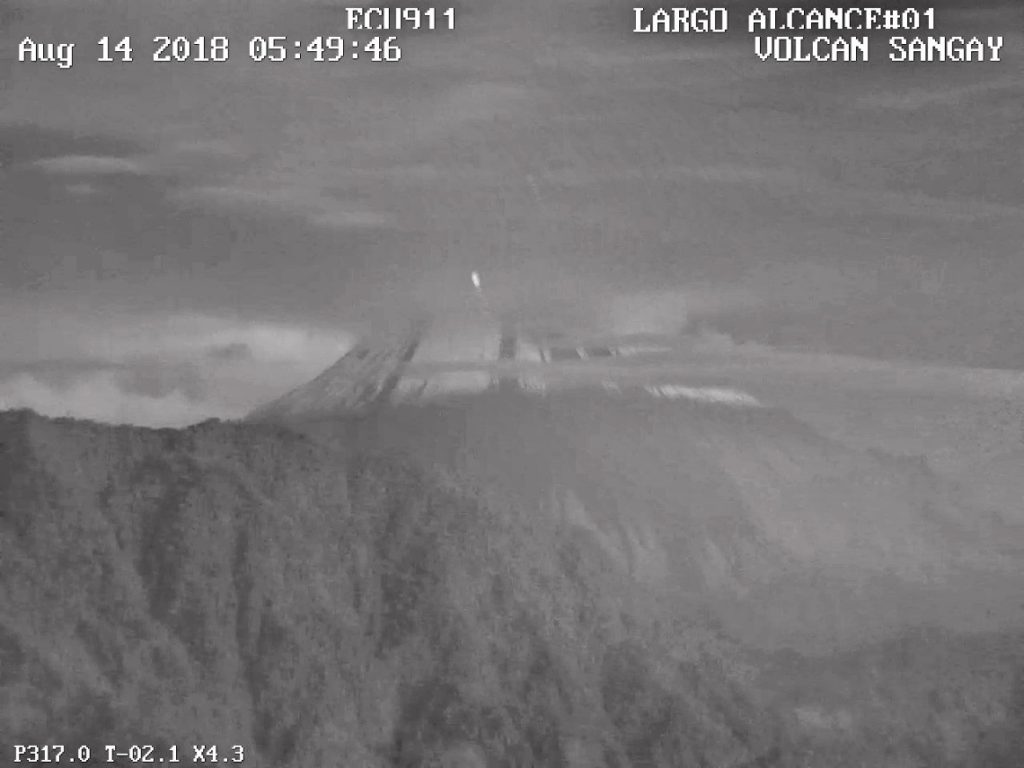 Figure 3: Incandescence is observed in the upper south-east flank of Sangay volcano at dawn on August 14 (source ECU911).

Conclusions:
The last eruptive phase of Sangay apparently ended in November 2017. After 9 months without surface activity, the volcano now has a new eruptive phase, similar to that observed in previous years. Depending on the direction and speed of the winds, ash emissions could cause ash to fall west of the volcano and eventually cross some of the country’s airways. It should be noted that during the last 14 years of activity of the volcano, the ash clouds did not exceed 3500 m above the crater, following major directions to the west, south-west, the Northwest and secondary directions to the Southeast, East and North.
Thermal warnings and direct observation could indicate the possible descent of a lava flow on the east-southeast flank of the volcano. This phenomenon does not represent a threat as long as its extension remains close to the volcano.

The IGEPN is very attentive to any change in the conditions presented by the volcano and will keep the community informed about the development of this new activity.

The volcanic island threatens to erupt.

The Japanese authorities are preparing to evacuate the South Island after the threat of a volcanic eruption has increased considerably.
The Meteorological Agency of Japan said volcanic earthquakes and sulfur emissions had increased on the summit of Kuchinoerabujima Island, about 1,000 km southwest of Tokyo, and raised its warning level at 4 of 5 Wednesday.
The mountain erupted three years ago, sending ashes and smoke thousands of meters into the sky and releasing potentially lethal pyroclastic flows, streams of ash and overheated gas that reached the sea. 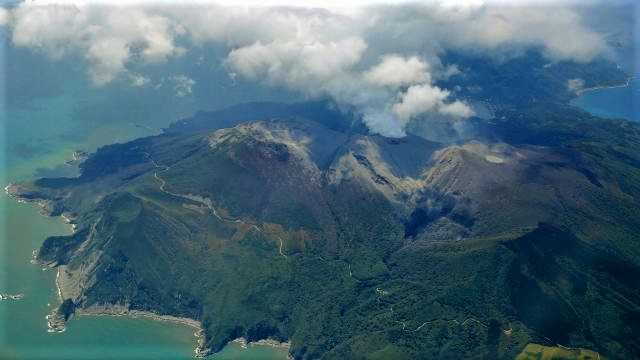 At that time, the entire population of the island had been evacuated but eventually returned. A hundred people live there now.
Japan has 110 active volcanoes and 47 monitors permanently.
When 63 people were killed in the volcanic eruption of Mount Ontake in September 2014, it was the worst disaster in this country for nearly 90 years.
In January, a member of the Japanese army was beaten and killed when rocks from a volcanic eruption swept over skiers at a central mountain resort.

A real eruption at the top of Kuchinoerabujima has not yet been detected.

After about a month of inflation (swelling) of the volcano, a slowdown in inflation has been noted for a week, with even a stop of deformations in recent days (Figure 1). This shutdown is accompanied by a decrease in volcano-tectonic seismicity under the summit craters (no event has been recorded in the last 3 days). At the same time, the CO2 concentrations in the soil in the volcano area are very low. 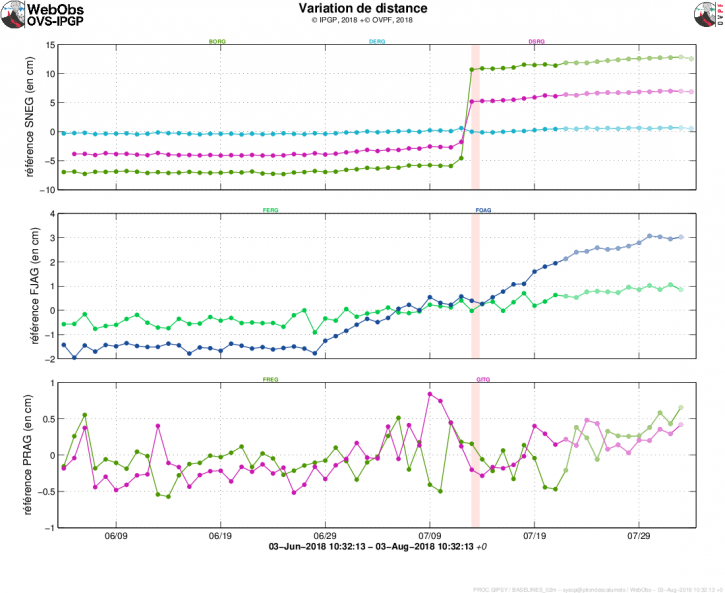 Figure 1: Illustration of the deformation during the last two months (the eruptive periods are represented in red). Here are shown baselines (variation of distance between two GPS receivers) crossing the Piton de la Fournaise building, at the top (at the top), at the base of the terminal cone (in the middle) and in the far field (at the bottom ). A rise is synonymous with elongation and therefore swelling of the volcano; conversely, a decrease is synonymous with contraction and therefore deflation of the volcano (© OVPF-IPGP)

The deep magma recharge and the pressurization of the superficial magmatic reservoir therefore seem to have ceased.

Since 2016, the deep refeeding under the Piton de la Fournaise is done by impulses, and such periods of lull have already been observed several times in 2016 and 2017 over periods ranging from 15 to 80 days. Given the amount of magma already present in the superficial magmatic reservoir, the next impulse of deep magma to the superficial reservoir may be the trigger for a new eruption, as was observed in 2016 or 2017. The resumption of pressurization of the magmatic reservoir had then preceded only 1 to 25 days an eruption.

It should be noted that the CO2 concentrations in the far-field soil in the Plains sector (Plaine des Cafres, Plaine des Palmistes) are still high, testifying to magma always present at great depth. 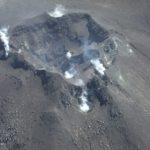 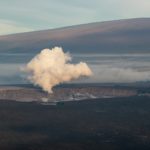