The National Institute of Geophysics and Volcanology, Osservatorio Etneo, communicates that the lava flow described in the press release of 5/12 (11:38 UTC) continues to be fed. During the last twenty-four hours, fluctuations have been observed, with phases during which the supply at the vent appeared more rare and others during which it increased and modest explosions were observed at the level of the eruptive mouth. Explosions at the summit craters are rare. According to camera images, the front of the flow that has reached the coast in recent days is cooling.
From a seismic point of view, during the last 24 hours, the average amplitude of the volcanic tremor has shown no variation, always remaining, so far, in the range of average values.
Since the last press release published, the signals from the ground deformation monitoring networks (GNSS and tilt) have not shown any significant variations. 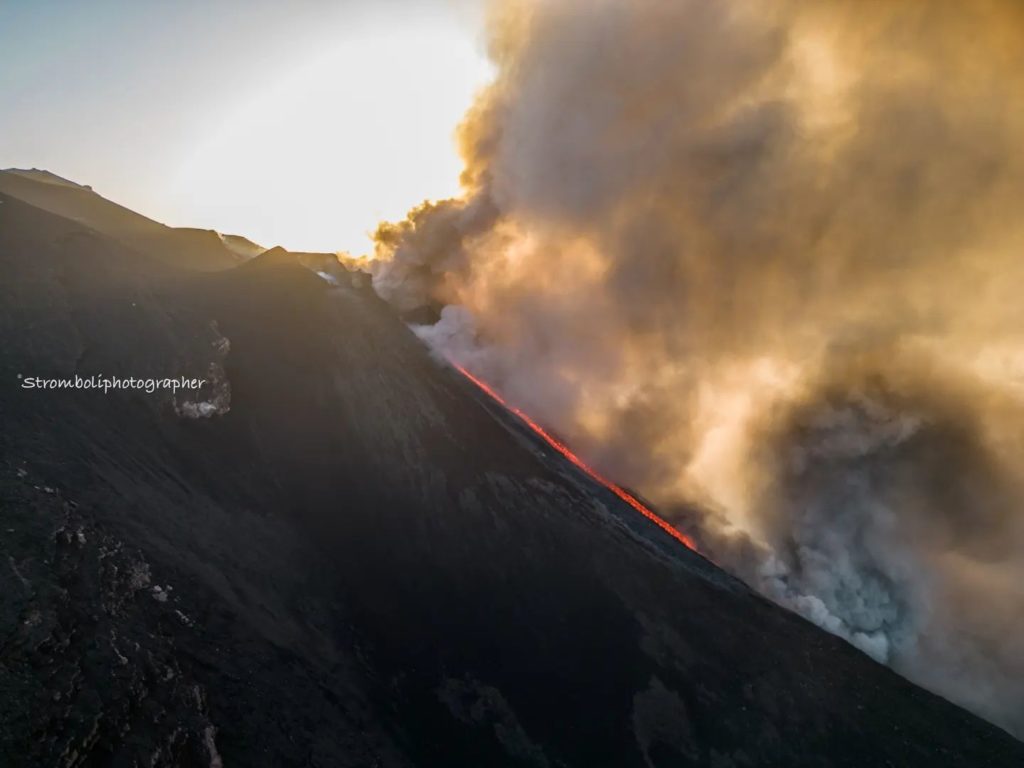 In the light of the monitoring data, it is highlighted:
1) VOLCANOLOGICAL OBSERVATIONS: During this period, normal explosive activity of the Strombolian type was observed with splashing activity in the northern zone of the crater and effusive activity by lava overflow accompanied by pyroclastic flows. The total hourly frequency oscillated between medium (10 events/h) and medium-high (16 events/h) values. The intensity of the explosions was mainly low in the northern area of the crater and medium to high in the central-southern area of the crater.
2) SEISMOLOGY: The seismological parameters monitored do not show significant variations, with the exception of the appearance of the pyroclastic flow on 4/12 and the increase in the amplitude of the tremor to very high values.
3) GROUND DEFORMATIONS: The ground deformation monitoring networks did not measure any significant variations. Slight impulse variations were observed on the signal from the Timpone del Fuoco inclinometer station.
4) GEOCHEMISTRY: SO2 flux at a medium-high level and increasing.
CO2 fluxes in the crater area show a downward trend but are still at medium to high values.
CO2/SO2 ratio: there are no updates; the latest data indicated mean values equal to 12.7.
Isotope ratio of helium in groundwater: decreasing but still on medium to high values (4.31).
5) SATELLITE OBSERVATIONS: The thermal activity observed by satellite in the summit area was moderate to high in correspondence with the effusive eruption in the summit area. 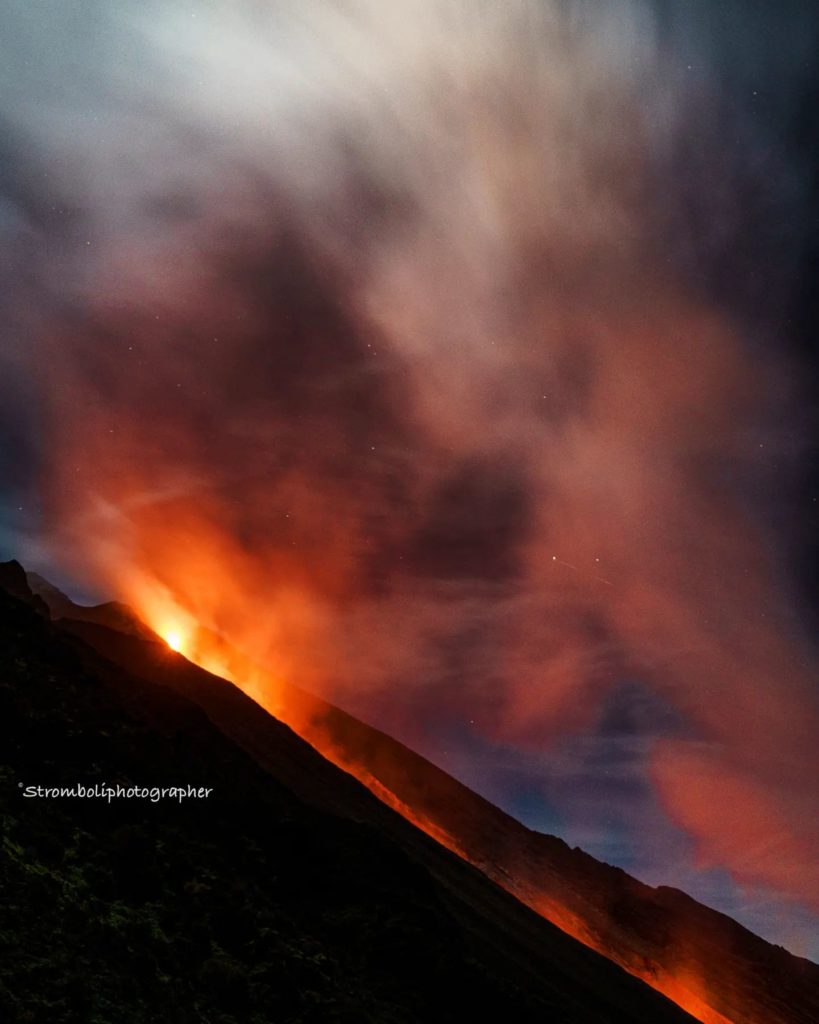 Effusive activity of December 4, 2022
Below is the timeline of eruptive events:
– After intense spattering activity at sector N1 of the North Crater area, on December 4 at 14:10 UTC an overflow of lava began to flow in the upper part of the Sciara del Fuoco, followed from 14:28 UTC from a small lava flow that has lengthened in the central part of the Sciara del Fuoco.
– At 14:31 UTC there was a pyroclastic flow followed by a more impressive second at 15:18 UTC). The latter, in particular, was born from the opening of a fracture on the northwest flank of the northern crater area, within the Sciara del Fuoco, and reached the coast after a few seconds. As the ash cover thinned, it was possible to observe the detachment niche and the emission points of the lava flow which are located between 50 and 80 meters below the rim of the crater of the North Crater area).
The lava flow reached the coast around 4:00 p.m. UTC and continued its flow even after the end of the weekly observation period.

Fissure 3 is generating a lava flow traveling to the north toward Saddle Road that has reached relatively flatter ground and slowed down significantly over the past several days, as expected.

The Hawaiian Volcano Observatory has not made observations of the eruption since this morning due to weather obscuring views and preventing fieldwork. 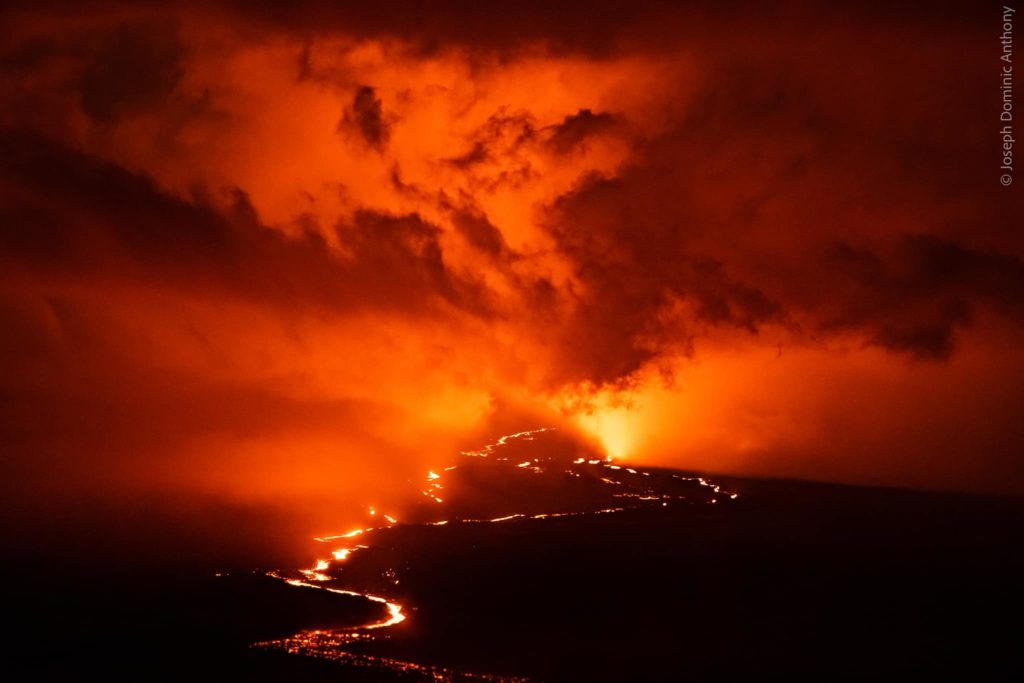 As of 5:00 a.m. today, December 6, the flow front was about 1.93 mi (3.1 km) from Saddle Road . The lava flow advanced at an average rate of about 68 feet per hour (21 meters per hour) over the 24 hour period prior to this morning; this rate is about twice the rate for the past several days. Over shorter periods yesterday, the advance rate varied from 62 to 90 feet per hour (18.8 to 27.4 m per hour). The lava flow remains active and is continuously supplied from the fissure 3 vent.

Sulfur dioxide (SO2) emission rates of approximately 120,000 tonnes per day (t/d) were measured on December 4, 2022, and remain elevated at this time. Volcanic gas is rising high and vertically into the atmosphere before being blown to the west at high altitude, generating vog (volcanic air pollution) in areas downwind.

Pele’s hair (strands of volcanic glass) fragments are being wafted great distances and have been reported as far Honoka‘a.

Tremor (a signal associated with subsurface fluid movement) continues beneath the currently active fissure. This indicates that magma is still being supplied to the fissure, and activity is likely to continue as long as we see this signal.

There is no active lava within Moku’āweoweo caldera nor the Southwest Rift Zone. We do not expect any eruptive activity outside the Northeast Rift Zone.

In the light of the monitoring data, it is highlighted:
1) VOLCANOLOGICAL OBSERVATIONS: Degassing activity at variable level at the level of the summit craters. Effusive activity of eruptive vents opened in the Valle del Leone, with the formation of small lava flows.
2) SEISMOLOGY: Low seismic activity due to fracturing; average amplitude of volcanic tremor mainly in the middle level.
3) INFRASOUND: modest infrasound activity.
4) DEFORMATIONS OF THE SOIL: The tendency to the inflation of the volcanic edifice continued. On November 15, inclinometer stations in the summit zone measured tilt in the microradian range, indicating uplift centered in the summit zone. 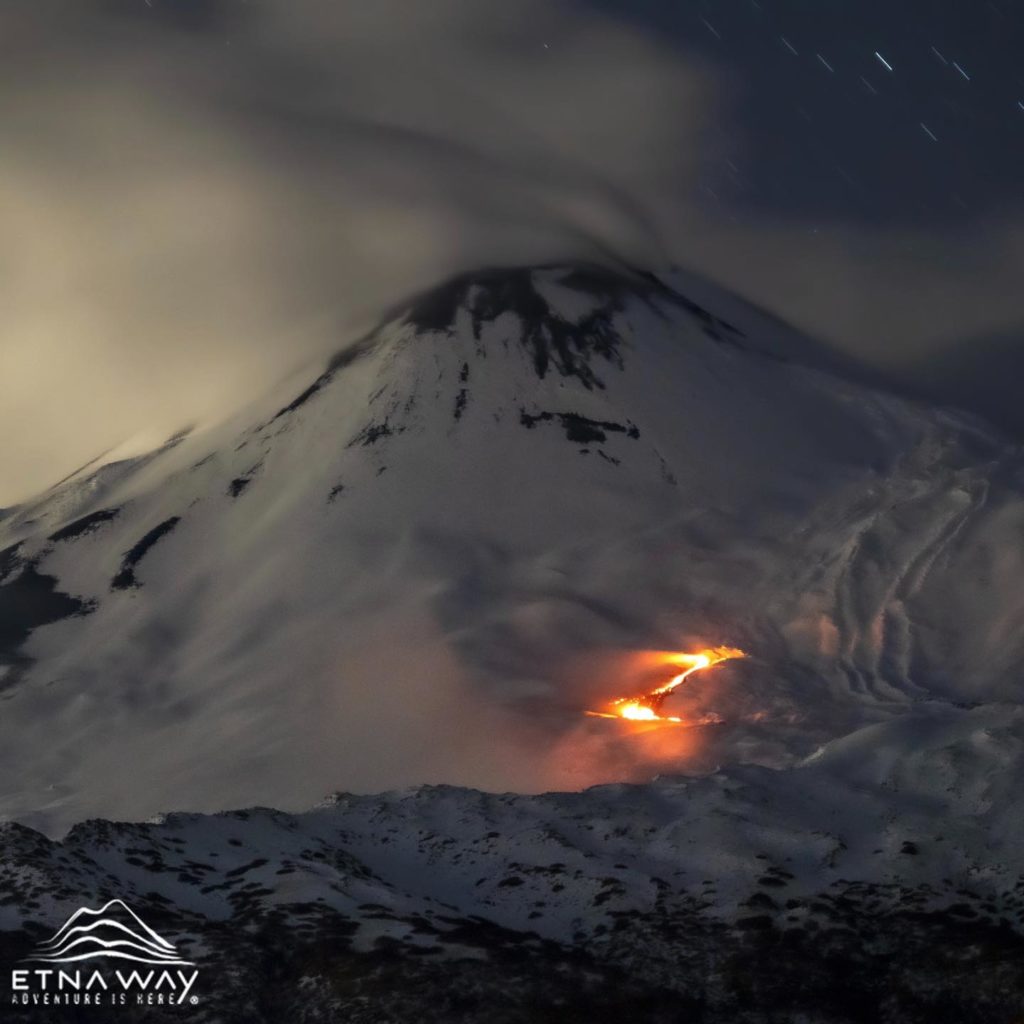 5) GEOCHEMISTRY: SO2 flux at an average level.
Soil CO2 flux shows average values.
The partial pressure of dissolved CO2 in groundwater shows values that fall within seasonal variability.
The isotope ratio of helium decreases but is still at medium to high values.
6) SATELLITE OBSERVATIONS: The thermal activity observed by satellite in the summit area was moderate to high in correspondence with the effusive eruption in the summit area. 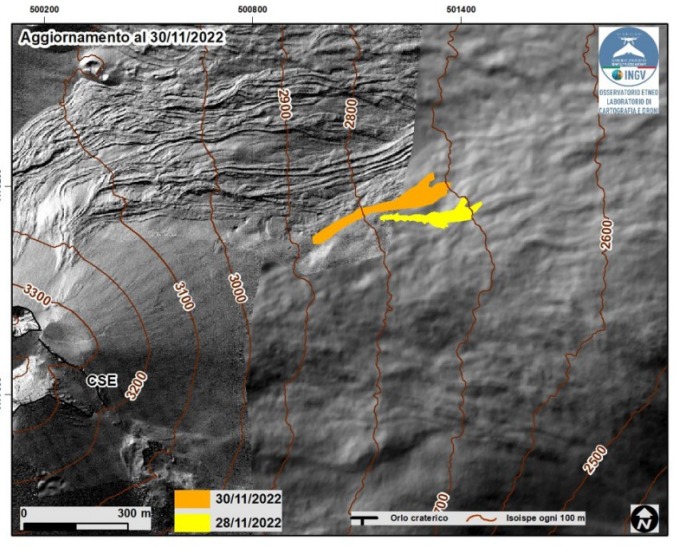 Map of the lava flow updated to November 30 obtained from the analysis of the Skysat satellite image of November 28 and images acquired by the Piedimonte Etneo camera. The background image is the shaded model of the relief of the summit area of Etna, obtained by processing drone images acquired during several overflights (September 15 and 21, 2022, October 6, 21 and 23), superimposed on the shaded model derived from Pléiades images of August 22, 2020 (AO Remote Sensing).

On November 27, improved weather conditions from 17:00 UTC observed that an eruptive vent had formed at the northeast base of the Southeast Crater (CSE), at an altitude of approximately 2800 m . The vent fed a small lava flow that headed towards Valle del Leone. The lava flow, which could be clearly observed at first light on November 28, covered about 300 m, reaching an altitude of about 2700 m above sea level. From 09:00 UTC on November 28 and until the end of November 29, poor weather conditions did not allow direct observations to be made, although the presence of lightning in the clouds demonstrated the continuation of eruptive activity. On November 30, when the weather conditions improved, the presence of another eruptive vent was observed, positioned a little further upstream than that of November 27, at about 2900 m altitude; the vent fed a lava flow that extended approximately 450 m parallel to that of November 27, reaching an elevation of 2700 m above sea level. Effusive activity is still ongoing as of November 30. November .
Since the beginning of the effusive activity on November 27, the images of the cameras have not shown any significant explosive activity at the level of the eruptive vents.

Since May, earthquake activity associated with Taupō volcano unrest continues. The M5.6 earthquake on 30 November was one of the largest recorded in Lake Taupō. Following that earthquake, there have been more than 600 aftershocks located by GeoNet. The number of aftershocks is typical following an earthquake of this size. Ground movement associated with the earthquake has been measured by our sensitive GNSS positioning instruments in and around Lake Taupō. The instrument at Horomatangi has shown 250 mm of horizontal movement (towards the south-east), which is the largest ever recorded ground movement at this location. GNSS stations onshore are recording a much smaller movement (~10 to 20 mm) associated with the earthquake. Further analysis of this data set is underway. 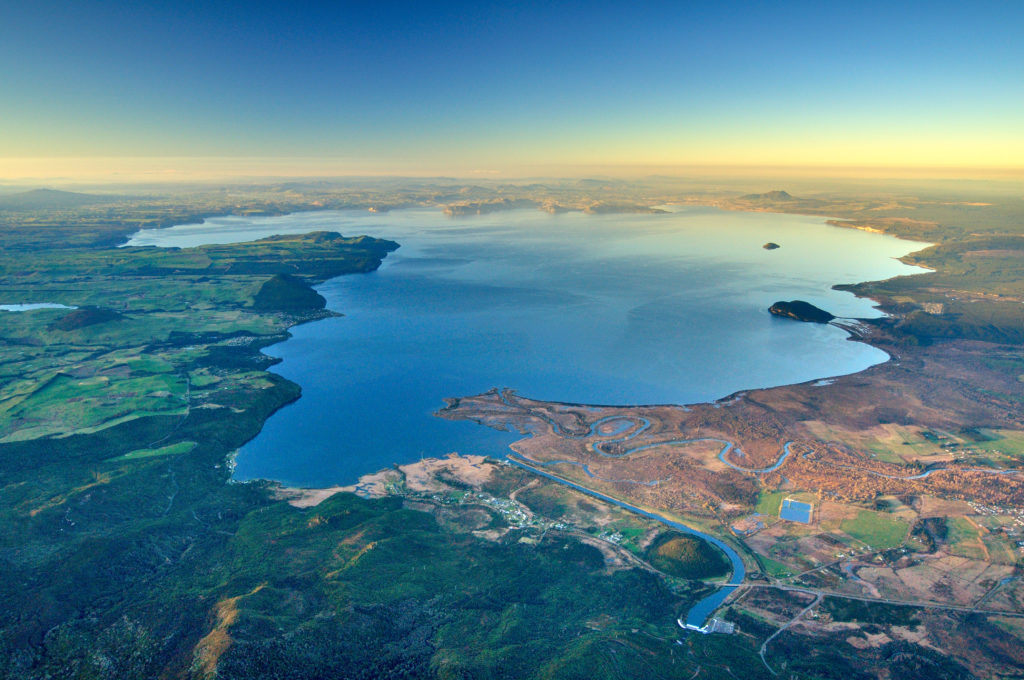 Experts are assessing earthquake-related tsunami in the lake that occurred because of the M5.6 earthquake. This caused run up along the lakeshore at several locations, mostly focussed on the northern end of Lake Taupō. Our field teams have been using drone footage and surveying techniques to measure localised lake shore slumping and tsunami inundation. Locations of investigation have been guided by public information along the lake shore. The position of pumice strandlines at Wharewaka Point appears to show the largest tsunami inundation, measured at ~40 m inland. Wave action is likely the result of at least one tsunami, however, we are still assessing their causes. More analysis of existing data, coupled with additional field survey results, should enable our experts to develop models of what happened.

Aftershock timeseries since the M5.6 on November 30.

To assess any broad-scale change at the volcano, we have sampled the geothermal gases at Motuoapa. That area appears unchanged from our last sampling survey in September. We are proceeding with installation of additional seismic and GNSS instruments to enhance our data capture. When the weather allows, we will be conducting a lake levelling survey that will complement the results from our analysis of GNSS data.

Previous unrest at Taupō has continued for months to years. Based on this history, the current unrest period could continue for many weeks to months at varying rates or intensities.

An eruption of G. Kerinci occurred on Tuesday, December 06, 2022 at 08:22 WIB. The height of the eruptive column was observed at ± 700 m above the summit (± 4505 m above sea level). The ash column was observed to be gray to black with a thick intensity, oriented to the southwest. The eruption was recorded on a seismograph with a maximum amplitude of 3 mm and a duration of 60 seconds. 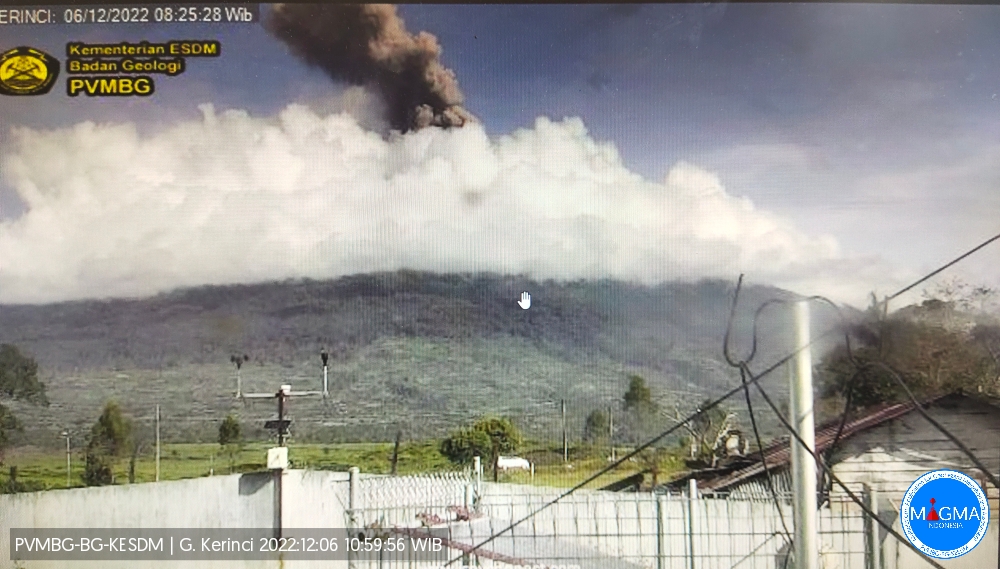 Volcanic Cloud Height :
Best estimate of ash-cloud top is around 14416 FT (4505 M) above sea level or 2240 FT (700 M) above summit. May be higher than what can be observed clearly. Source of height data: ground observer. 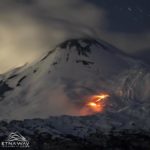 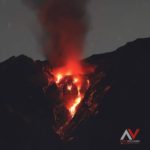