MARN reported that an eruption at San Miguel’s central crater began on 15 November, and by 11h00 on 20 November a total of 62 phreatic explosions had been recorded, averaging 10 per day. An additional 24 explosions were recorded from 11h00 on 20 November to 11h00 on 21 November and 12 more were recorded between 11h00 and 11h00 during 21-22 November. Explosions generated gas, ash, and steam plumes that generally rose around 500 m above the crater rim, though at 13h36 on 18 November and 12h06 on 19 November eruption plumes rose as high as 1.1 km. Some of the events were accompanied by crater incandescence during 15-20 November. Sulfur dioxide emissions generally averaged 100-170 tons per day, below the baseline of 300 tons per day. Specific measurements during explosive events revealed that the emissions were sometimes higher; 1,200 tons per day was measured on 19 November during one of the largest explosions, and 378 tons per days was measured during an explosion on 21 November. Seismicity was characterized by volcano-tectonic events, long-period events, and tremor. Deformation data showed no significant changes. The public was warned to stay 2 km away from the volcano, and for those living within a 2-5 km radius to identify evacuation routes and to take preparation measures as guided by the Sistema Nacional de Protección Civil.

Special Report No. 9, Date and time of release: November 23, 2022, 10:30:00 a.m.
WARNING. Intermittent explosions and degassing continue on the San Miguel volcano, it is called to be vigilant and not to carry out activities around its central crater.

According to the monitoring of seismicity, gas concentration and characteristics of the collected ash, this activity is attributed to the contact processes of high temperature rocks and water inside the volcano (phreatic activity, mainly), which generate small explosions and the emission of gas, ash and water vapor through the central crater. This behavior will be maintained for the following days. 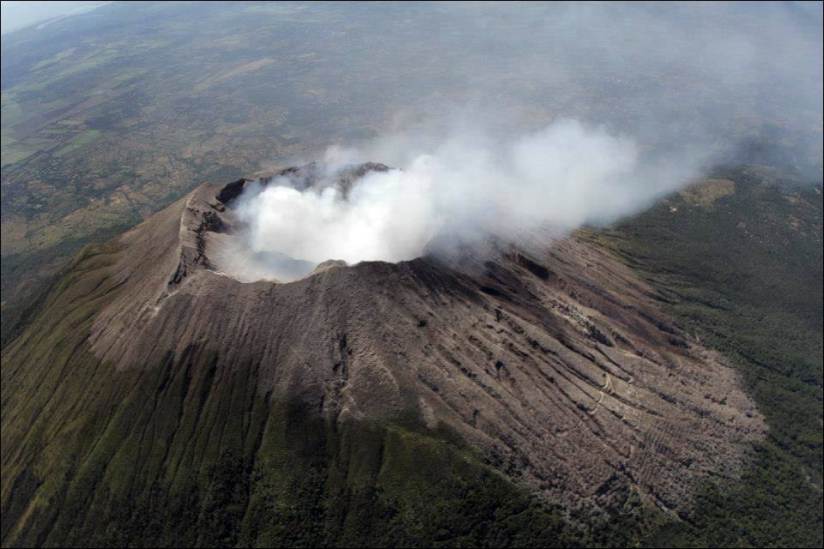 Due to its historical records, the San Miguel volcano is characterized by this type of activity, classified as Strombolian and characterized by explosions, generally not very violent, accompanied by hot mixtures of gas, ash and rock fragments.

The seismicity recorded by the volcanic station of San Miguel (VSM) indicates that currently no intensification is observed in its internal processes.

Physical geology:
The samples taken from the ash deposits around the volcano, following the explosions, are mainly composed of fragments of pre-existing rocks and weathered deposits from the walls and fumaroles of the crater. These discoveries indicate, so far, that these deposits correspond only to the entrainment of material from the walls of the conduit through which the gases are transported from the interior to the crater of the volcano, without indications that there is a new magmatic material being transported.

Deformation:
The deformation parameters remain without significant changes, according to the latest ground deformation measurements.

The explosive eruption of the volcano continues. Ongoing activity could affect low-flying aircraft.

An explosive eruption of the Strombolian type has been ongoing since 16 November, 2022: a lava fountaining in the summit crater and the associated glow of the volcano’s summit at night are noted. Satellite data by KVERT showed a thermal anomaly over the volcano on 17-20, and 24 November, on other days of the week the volcano was obscured by clouds. 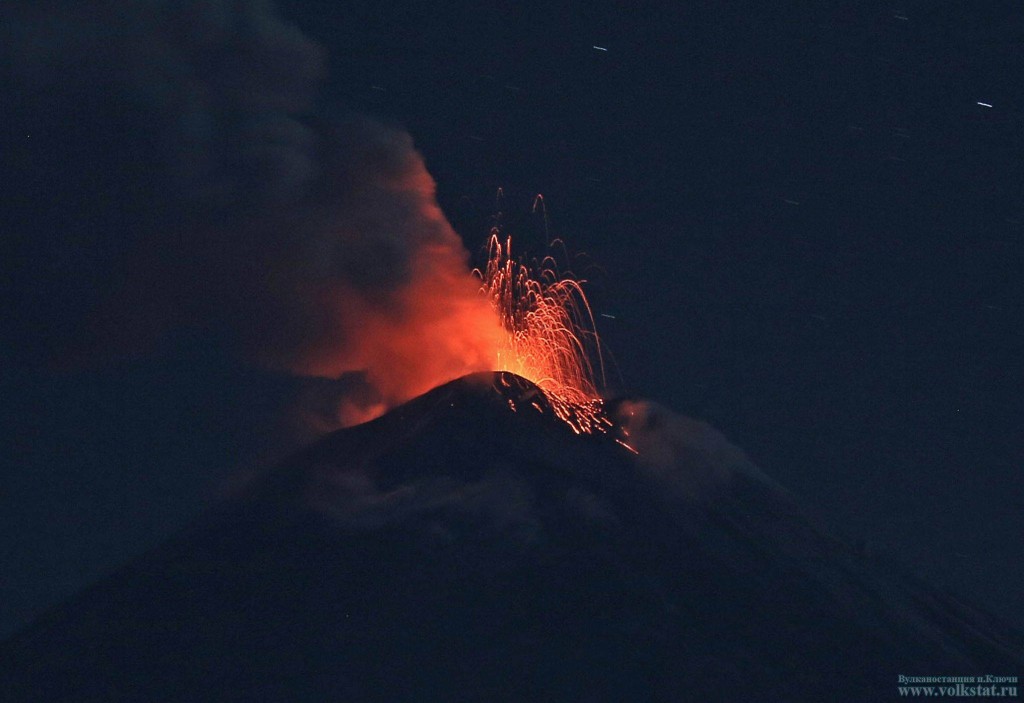 KVERT reported that a thermal anomaly over Klyuchevskoy was first identified on 13 November and was visible daily through 20 November. An explosive Strombolian eruption began at 2330 local time on 17 November, the same day that the thermal anomaly intensified. Gas-and-steam plumes drifted SE. The Strombolian eruption and gas emissions persisted; KVERT raised the Aviation Color Code to Yellow (the second lowest level on a four-color scale) on 20 November.

In the light of the monitoring data, it is highlighted:
1) Temperature of the crater fumaroles: Along the summit rim, the maximum emission temperature has stable values ​​around 374°C.
2) CO2 flux in the crater area: The CO2 flux in the crater area remains at medium-high values.
3) SO2 flux in the crater area: at a medium-high level and moderately increasing
4) Geochemistry of fumarolic gases: Analysis of samples taken from the fumaroles of the crater on November 16, 2022 shows a slight decrease in CO2 (values ​​around 12%), and He (1.4-1.6 ppmv), remaining however in the middle level. Analyzes of the isotope ratio of helium return stable values ​​between 5.52 and 5.54.
5) CO2 fluxes at the base of the La Fossa cone and in the Vulcano Porto area: The CO2 fluxes recorded at the sites of Rimessa, C. Sicilia show stable values, always above background levels, while that P4 max and Faraglione show values ​​close to background levels. 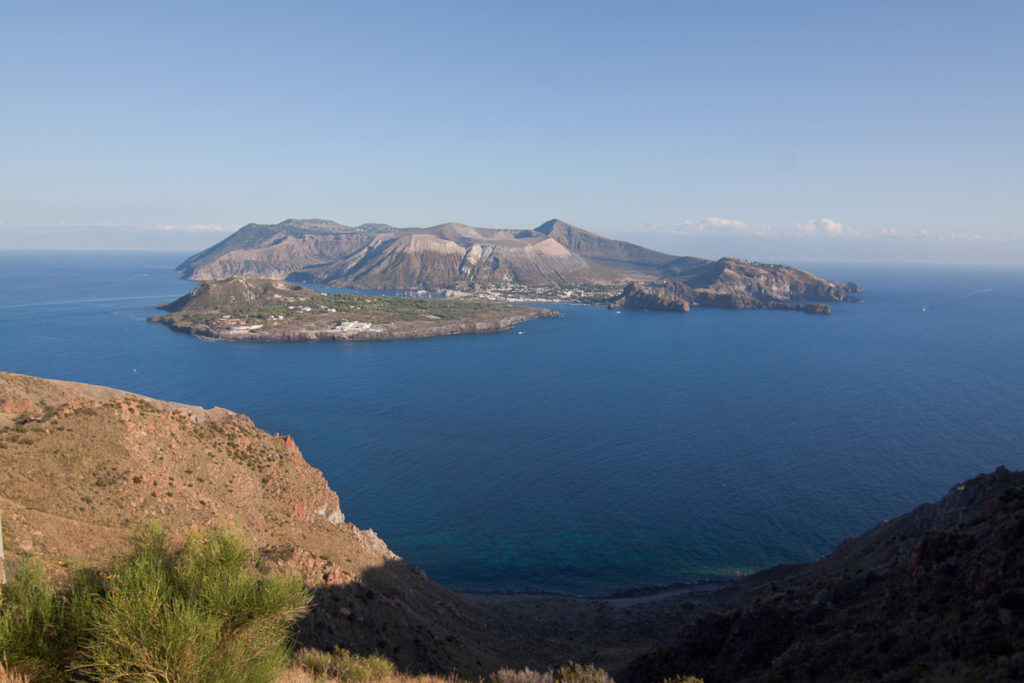 6) Geochemistry of thermal aquifers: Stable but high temperature values ​​are recorded in the well of Camping Sicilia. The conductivity sensor is faulty. There are no new updates for the level and conductivity values ​​measured in the waters of the Bambara well
7) Local seismicity: Low occurrence rate of local microseismicity.
8) Regional seismicity: No earthquake with ML>=1.0 was located last week in the Vulcano region.
9) Deformations – GNSS: The network of permanent GNSS stations has not recorded any significant variations
10) Deformations – Inclinometry: The inclinometric network did not record any significant variations.
11) Gravimetry: There are no significant variations.
12) Other Comments: Mobile GNSS. The GNSS mobile network acquires and transmits movements in real time at a frequency of 1 Hz. The historical series acquired so far do not show significant variations around the Porto di Levante area.

The seismological activity of the period was characterized by the recording of:
A continuous tremor signal associated with fluid dynamics inside the volcano, which during the month showed an increase in its energy compared to previous periods, reaching RSAM values ​​between 0.5 and 1.1 um/ s, values ​​considered above their base level. This seismic tremor signal had two dominant frequency ranges: 1.0 – 1.2 Hz and between 1.6 and 2 Hz. Similarly, 111 discrete tremor episodes were recorded; the size of the largest earthquake assessed from the Reduced Displacement (DR) parameter was equal to 26 cm2.
15 VT-type seismic events, associated with rock fracturing (Volcano-Tectonics). The most energetic earthquake presented a value of local magnitude (ML) equal to 3.8, located 4.8 km east-south-east of the volcanic edifice, with a depth of 4.2 km from the crater.
3547 LP-type seismic events, also associated with fluid dynamics within the volcanic system (Long Period). The size of the earthquakes evaluated from the Reduced Displacement (DR) parameter, presented a sustained increase compared to previous periods, with values ​​that reached a maximum equal to 46 cm2.
Concerning the acoustic signals, which mainly show an explosive activity, these presented values ​​lower than 4 Pa/net 1 km. 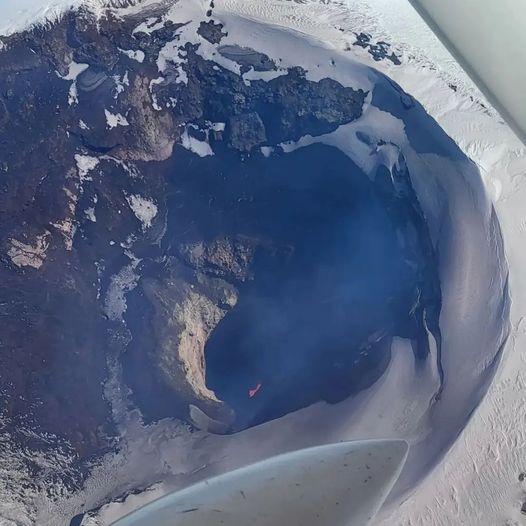 Fluid Geochemistry
Data on sulfur dioxide (SO2) emissions obtained by optical differential absorption spectroscopy (DOAS) equipment, corresponding to the Los Nevados and Tralco stations, installed 10 km to the East-North-East (ENE) and 6 km east-southeast (ESE) of the active crater respectively, had an average value of 1,034 ± 257 t / d, with a maximum daily value of 2,662 t / d on November 15. According to the activity of the volcano, the average value is at levels considered normal.
1 satellite anomaly was reported in sulfur dioxide (SO2) emissions into the atmosphere in the area near the volcano on November 1.

Satellite thermal anomalies
During the period, 8 thermal alerts were recorded in the area associated with the volcano, with a maximum Volcanic Radiative Power (VRP) of 5 MW on November 4, a value considered low according to data processed by the Middle Infrared of Observation of Volcanic Activity. (MIROVA).
According to analysis of Sentinel 2L2A satellite imagery, 4 radiance anomalies were detected in the crater-associated area on November 1, 4, 6, and 9, with a maximum anomalous radiance area of ​​7,200 m2 on November 7.

Geodesy
According to the data provided by the geodetic monitoring network (GNSS), the most important aspects related to volcanic deformation have been characterized by:
– The presence of a lower noise level, associated with an improvement in snow conditions and responding to seasonal changes, making it impossible to observe the existence of any deformation.
– The horizontal and vertical rates show an increase compared to the previous period, but still do not exceed the seasonal cycle observed in previous years.
– The maximum horizontal strain rate is recorded at the TRAL station and reaches 0.9 cm/month, while the maximum vertical magnitude is recorded at the KIKE and TRAL stations with 1.5 cm/month.
– Displacements are still framed in seasonal cycles and still do not indicate deformation.
– Regarding the interferometry, good coherence cannot be obtained due to the amount of snow accumulated in the vicinity of the volcano.
Geodetic data suggests an established inflationary process within normal motion parameters for this volcano, concluding that no obvious deformation of the volcanic system has been observed « yet ». 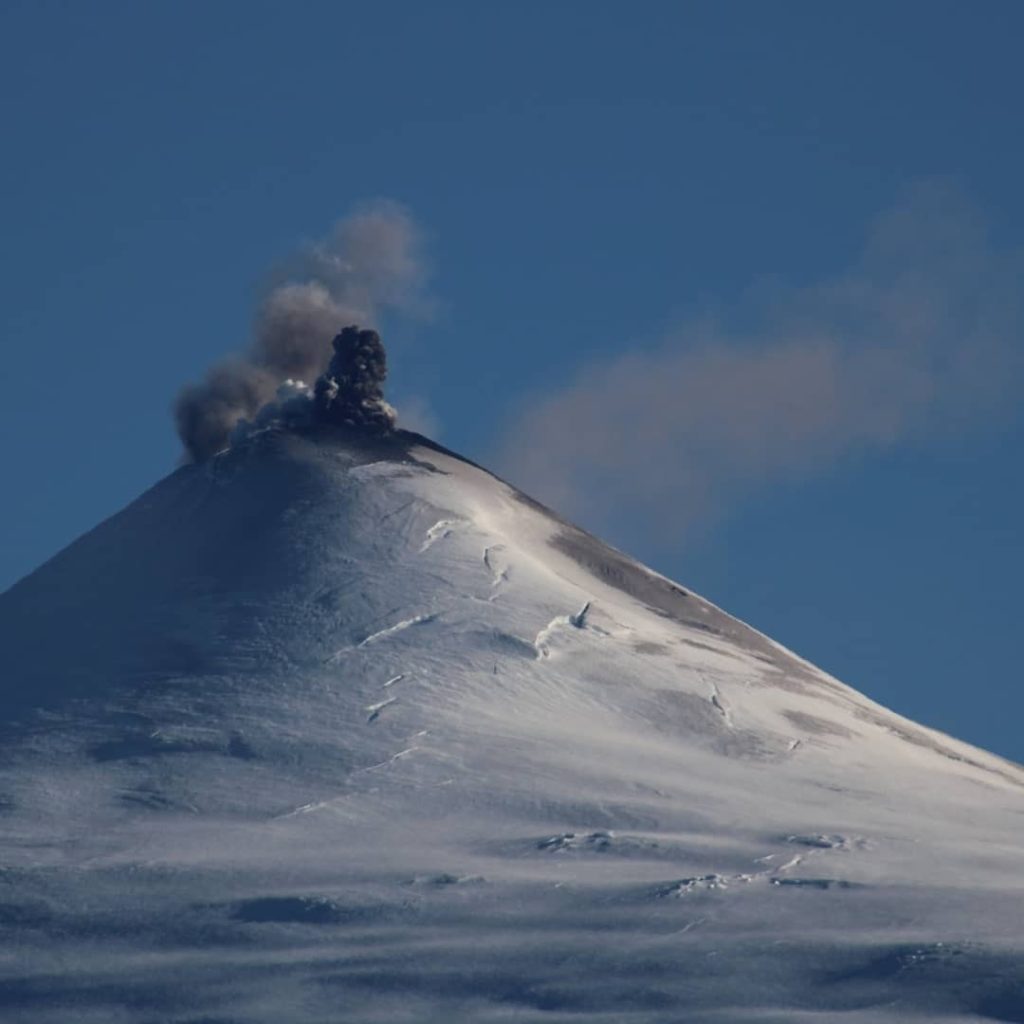 Surveillance cameras
Thanks to the surveillance cameras, a whitish degassing was recorded which generated columns up to 300 m high above the level of the crater. During this fortnight, a fairly energetic nocturnal incandescence was predominant, generating, at heights less than 120 m above the level of the crater, undifferentiated deposits on the West, South-West, South, South-East and East, with spans less than 500 m. . The occurrence of Strombolian explosions on November 1 and 2, which generated emissions of incandescent ballistic fragments above the crater, was noted.

The activity of the Villarrica volcano remains in a phase where the energy of the continuous signal valued with the RSAM (measurement of the seismic amplitude averaged by time lapse) is maintained with an upward trend, behavior observed during the last fortnight. In turn, moderate explosions have been recorded which emit incandescent materials in the area near the crater. This suggests that the volcanic process is continuing with a level of activity above its baseline threshold. The recording of VT activity in the East-Southeast source and the increase in seismic energy suggest that the processes observed at the surface may be continuing, related to the shallow lava lake process. In this context, small explosions emitting ash and ballistics can be recorded in the area surrounding the crater.

Due to the above, the technical volcanic alert is maintained at YELLOW. A potential impact zone is considered within a radius of 500 m around the center of the active crater.

Information on the activity of the COTOPAXI volcano, THURSDAY NOVEMBER 24, 2022

On Thursday, November 24, according to the cameras surrounding the Cotopaxi volcano, a layer of gray ash was observed covering the upper part of the glacier on the northeast flank. This layer of ash is the result of the emission reported yesterday in IGAlInstante #8. The ash emission had a height between 200 and 300 meters above the level of the crater. At 6:30 p.m. TL on November 23, a low amplitude tremor signal was recorded which could have been accompanied by a slight ejection of ash in the same direction. These emissions correspond to the most likely scenario reported in the special report published on November 22. 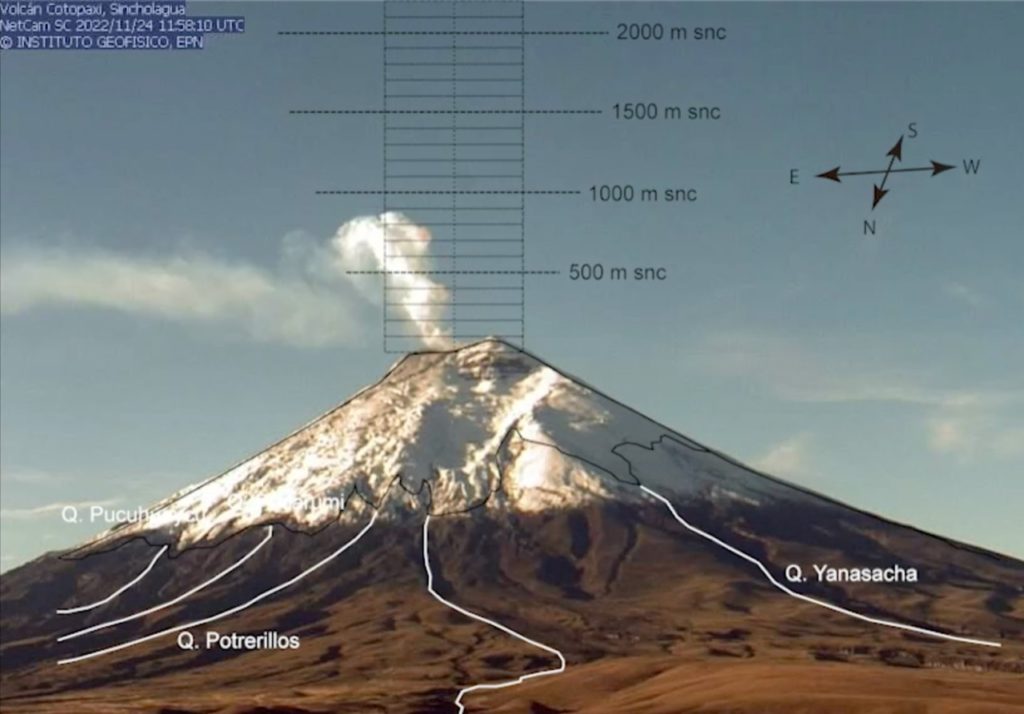 This morning, releases of water vapor and gas are observed at altitudes between 500 and 900 meters above sea level and an IGEPN team is assessing the situation to learn more about the activity that has occurred. . The surface trend of the Cotopaxi volcano remains upward.

The Geophysical Institute maintains permanent monitoring of the volcano’s activity and will report any changes in a timely manner. 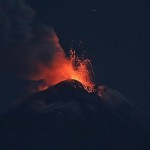