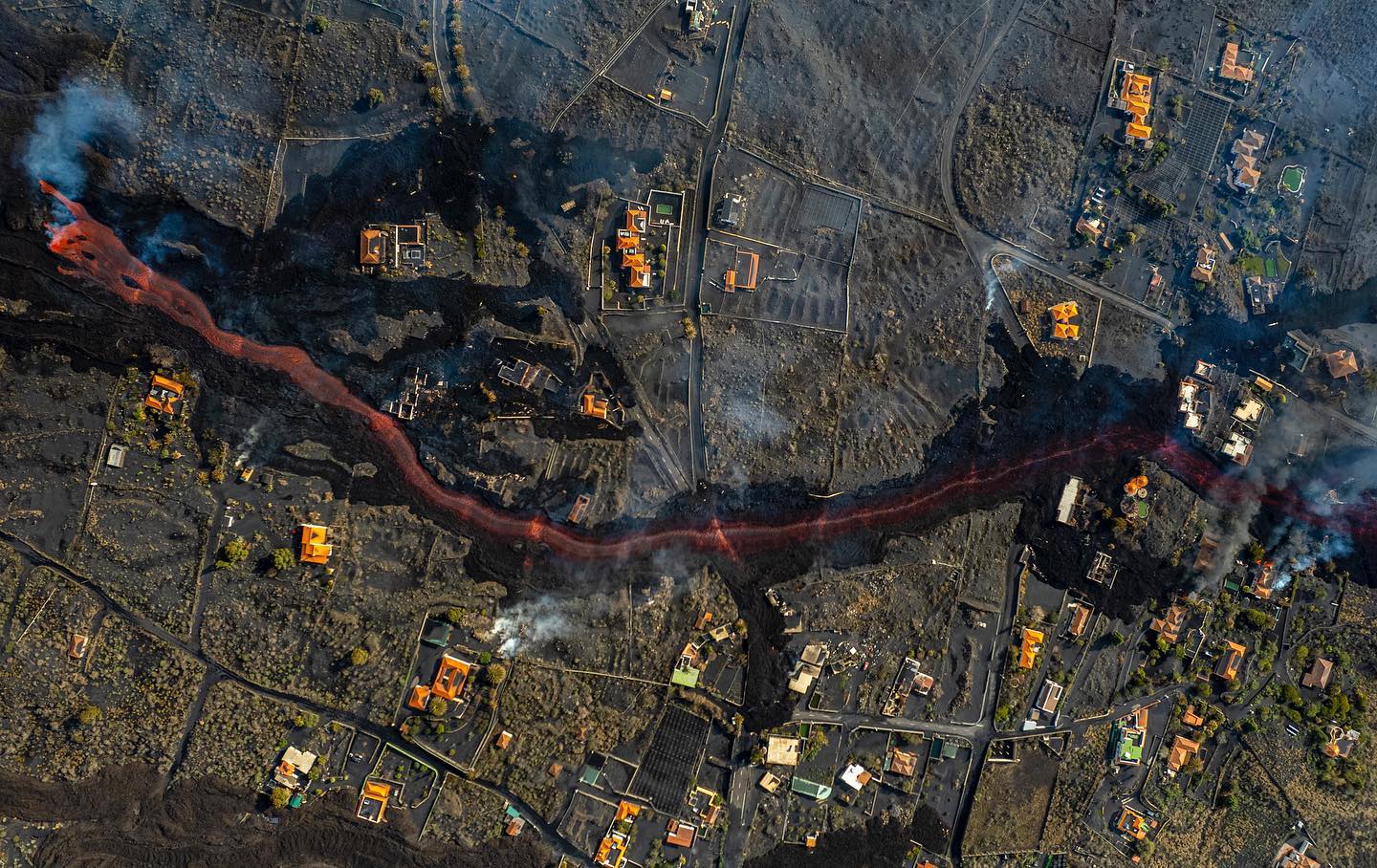 The Icelandic Meteorological Office elevated the aviation color code from yellow to orange on the 6th of December for Grímsvötn volcano when the seismic actvity increased above normal level in the aftermath of the glacial outburst (which peaked on 05.12). On that day a M3,6 earthquake occurred at 6:16 UTC and 15 more earthquakes occured within the day. However, yesterday (07.12) very few earthquakes were identified in the area and the geophysical parameters all showed normal values. Based on these current observations, IMO moved the aviation color code from orange back to yellow as there were no clear indications for an imminent eruption. 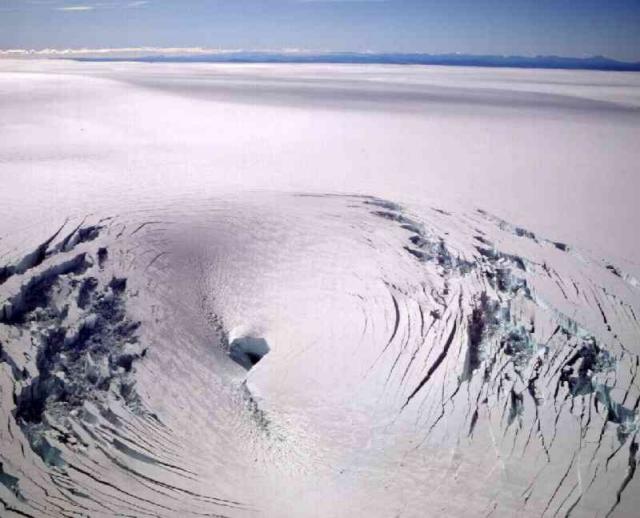 „When the seismicity increased we needed to react as it could have been a typical precursor of a volcanic eruption“ says Kristín Jónsdóttir Team leader for operational natural hazard monitoring at IMO.

„We need to react to any relevant changes in the volcano activity. In this case it was likely that an eruption would have been triggered by the flood, and sometimes the time between the two events is not that long so we needed to be ready. This scenario, that a flood will trigger an eruption is becoming less likely as time passes“, says Kristín.

The Grímsvötn volcanic system is the most active system in Iceland and has erupted about 70 times during the last 1100 years. The precursors of an eruption can be very short and this is the reason why it is very important to monitor the area closely and to be ready to respond to any evident changes in the volcanic system.

Scientists will continue to monitor the area closely although there are currently no indications of an imminent eruption at Grísmvötn.

The discharge in Gígjukvísl river is decreasing bu the conductivity is still high, which indicates that geothermal water is in the river. 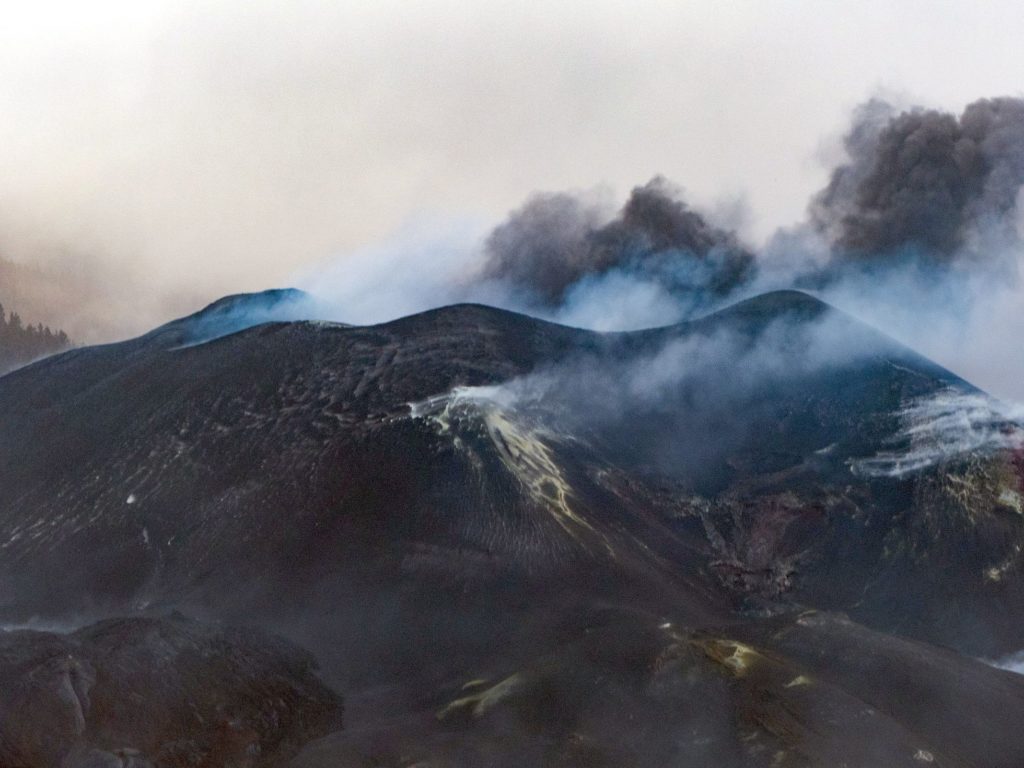 The amplitude of the tremor signal remains at low levels and is just as stable as the previous days.
As in previous days, the island’s network of permanent GNSS stations does not show a clear trend in the deformation of the stations closest to the eruptive centers.
In the rest of the stations, the slight deflation possibly linked to the deep seismicity has stabilized, except in LP01 which continues to record it.

In view of the image calibrated at 08:45 UTC, an ash cloud height of 1700 m is estimated, dispersing in a southwest direction.
Yesterday at 20:05 UTC, due to the significant increase in the height of the eruptive column, the IGN issued a new VONA (Volcano Observatory Notice for Aviation) message indicating that the maximum height of said column was 2,500 m on the sea level. 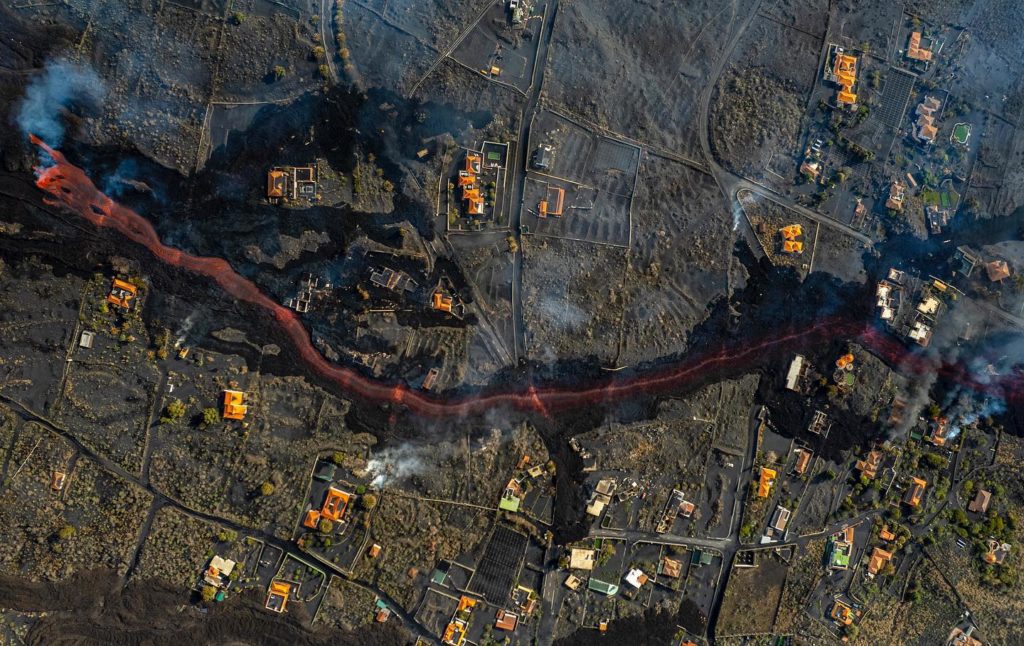 The persons in charge of the volcanic emergency plan of the Canary Islands (Pevolca) gave a press conference this Thursday during which they took stock of the situation of the eruption of the volcano Cumbre Vieja, on the Canary island of La Palma. Here are the most remarkable data:

Several emission centers remain active in the south-eastern part of the main cone, with sporadic pulses of Strombolian activity and ash emission.
Cracks and fractures in the upper part of the secondary cone altered the morphology of this cone, producing small collapses towards its interior and adjacent craters.
The height of the scatter cloud measured today was 1,700 m. The expected ash cloud disposition is a favorable scenario for aeronautical operability.

The possible interruption of the lava emission on La Palma does not imply the end of the emergency due to the eruption, because the degassing of the eruptive center and the flows can last for months, warned the volcanic emergency of the Canary Islands (Pevolca). Blanco, director of the Canary Islands of the National Geographic Institute (IGN), explained that the submarine volcano Tagoro, which erupted near the coast of El Hierro a decade ago, continued to emit gas for several months after the end of the eruption and the same is likely to be true in the case of La Palma. 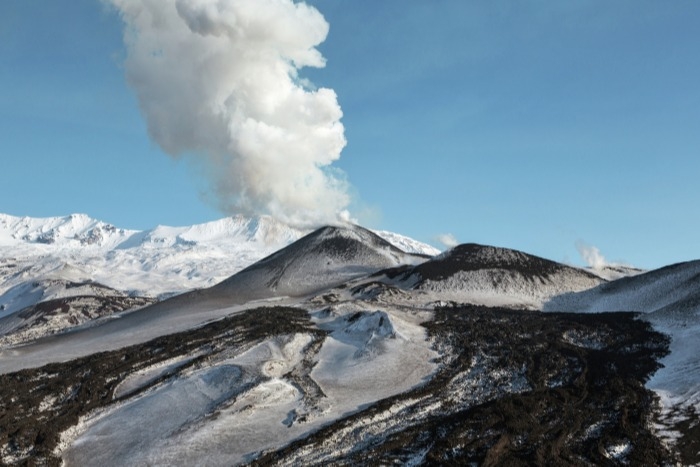 Volcanic Activity Summary:
A moderate gas-steam activity of the volcano continues, but an eruptive event was observed on 09 November, 2021, last time. A thermal anomaly over the volcano was noting on 25 October, 2021, last time. Probably the explosive eruption when began on 20 October, 2016, ended on 09 November, 2021. KVERT continues to monitor Ebeko volcano.
A moderate gas-steam activity of the volcano will continues. Ongoing activity could affect low-flying aircraft.

Weekly activity bulletin of the Nevado del Ruiz volcano.
The activity level continues at: Yellow activity level or (III): changes in the behavior of volcanic activity.

The seismicity linked to the dynamics of the fluids inside the volcanic conduits has slightly increased in the number of recorded earthquakes and in the released seismic energy. This seismic activity was characterized by the appearance of continuous volcanic tremor, tremor pulses, earthquakes of long types and very long periods, which presented moderate energy levels and variable spectral content. These earthquakes were located mainly in the Arenas crater. Some of these signals were associated with ash emissions, confirmed by the cameras installed in the area of ​​the volcano and by the report of the officials of the Colombian geological service and the Los Nevados National Natural Park. 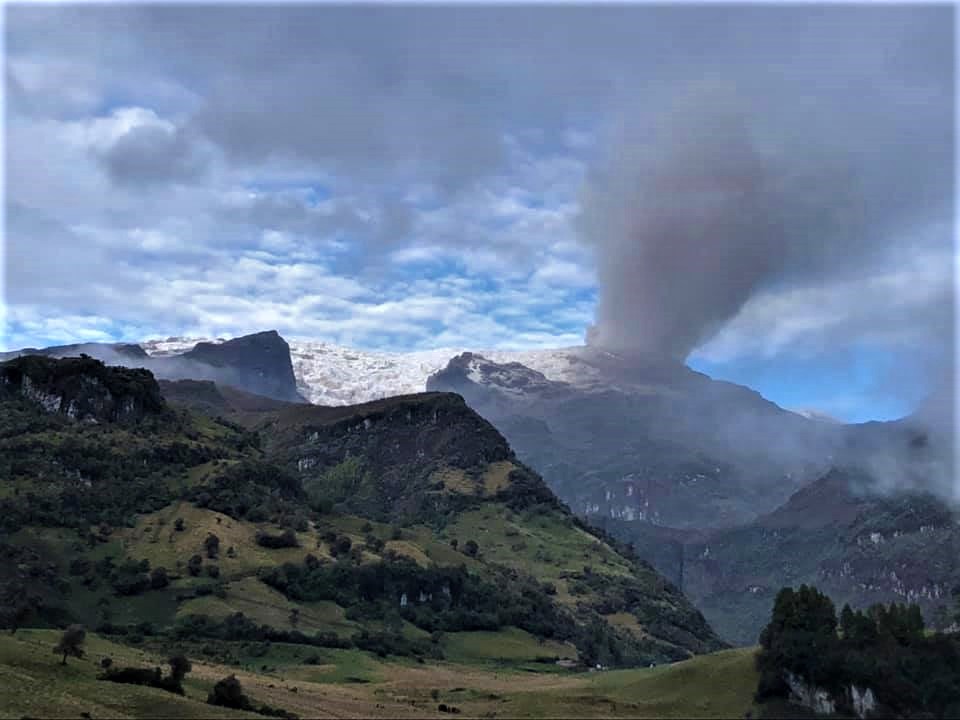 The seismicity generated by the fracturing of the rock increased slightly in number of earthquakes and in seismic energy released compared to the previous week. This seismic activity was located mainly in the North-West, North-East and South-East sectors of the volcano and in the Arenas crater.

The depths of the earthquakes ranged from 0.6 to 6.6 km. The maximum magnitude recorded during the week was 1.5 ML (Local Magnitude) corresponding to the earthquake recorded on December 2 at 3:15 p.m. (local time), located 1.3 km north-northwest of the Arenas crater, at a depth of 1.6 km. 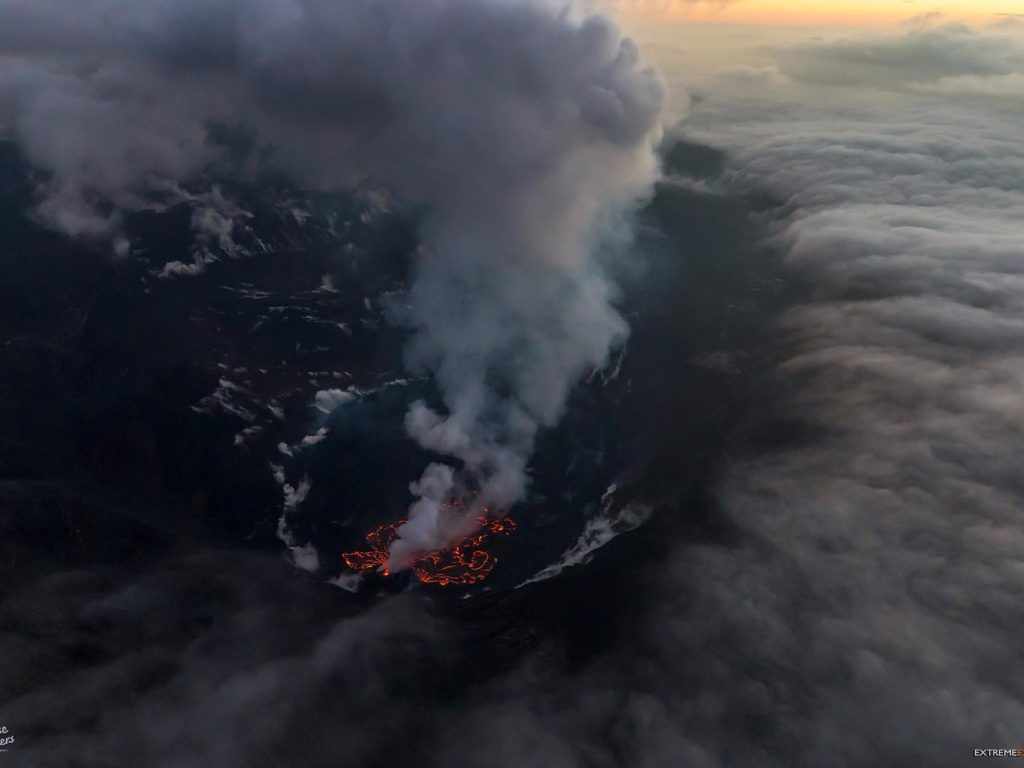 Summit Observations:
The eruption of lava continues from the western vent in Halema‘uma‘u crater. Deflationary tilt began yesterday afternoon, and switched to inflationary tilt just before midnight. Earthquake activity remains below background. The most recent measurement of sulfur dioxide (SO2) emission rates on November 29, 2021 was approximately 1200 tonnes per day. No new measurements have been made due to recent weather conditions.

Halemaʻumaʻu Lava Lake Observations:
Lava continues to erupt from a single vent in the western wall of Halemaʻumaʻu crater, supplying lava into the lava lake that is contained within the western portion of the crater. Spattering continues within a small lava pond at the vent, and sporadic ooze-outs of lava are present along the solidified lake margins. Lake activity decreased slightly yesterday evening with summit deflation, but increased around midnight with summit inflation. The lake has seen a total increase of about 65 meters (213 ft) since lava emerged on September 29. 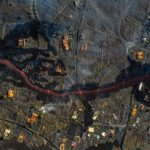 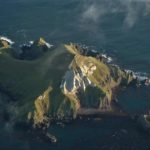