Flood of the Skafta river. September 08, 2021.
The flood in the river bed recedes. However, water will continue to spill over the lowlands for the next few days. 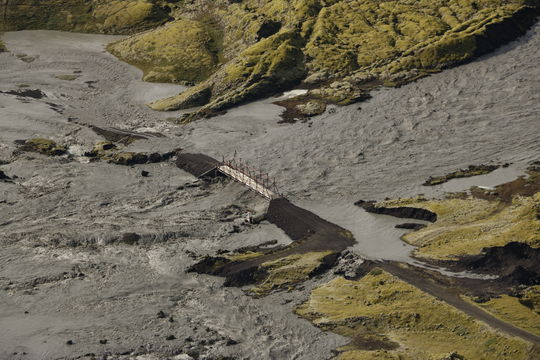 A photo from a surveillance flight yesterday shows the flood water near the Skaftárdalur bridge.

The flow from the Skaftá to Sveinstindur has decreased and now measures around 1,100 m3 / sec compared to yesterday’s maximum flow of around 1,500 m3 / sec. The flow at the meter to Highway 1 measures 600m3 / s and has been unchanged since around midnight.

Experts from the Meteorological Office yesterday carried out a surveillance flight over the flood zone to investigate the effects of the flood. The runoff distribution near the glacier was found to be smaller than during the 2018 runoff, which is in line with the fact that the maximum flow is also lower. The effects of runoff near settlements are not yet visible, as runoff water has not yet flowed back into the channel of the Skaftá River. 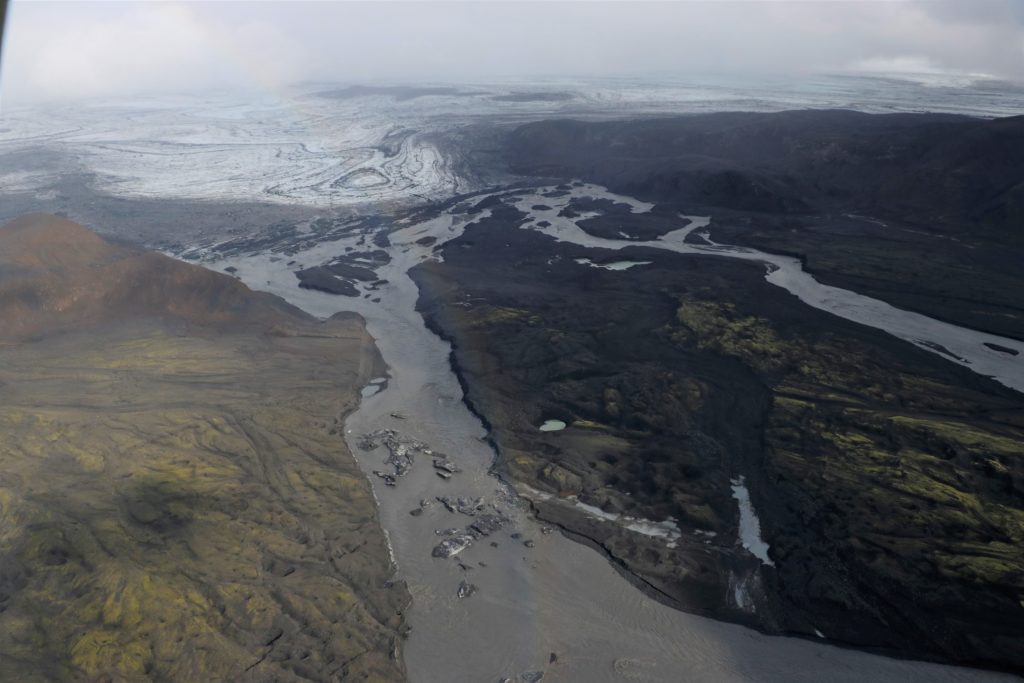 The flow at Sveinstindur continues to decrease and is now less than 1000 m3 / sec. The flow at Eldvatn also decreased and the maximum flow was therefore reached there.

The flood in the river channel is therefore receding, but water is expected to continue to flow into the lowlands over the next few days.

Experts will meet in a consultation meeting at 2pm today to better examine the latest data and assess what will be the aftermath of the flood.

On 1 September the Icelandic Meteorological Office (IMO) stated that the water level of the Skaftá river at Sveinstindur (the closest gauging station at 28 km downstream from the ice margin) rose, suggesting the beginning of a Skaftárhlaup or glacial outburst flood (also called a jökulhlaup), that originated from Grímsvötn’s Western Skaftá caldera. A sulfur odor was also noted in the vicinity of Skaftá and Hverfisfljót. IMO warned that hydrogen sulfide released from the floodwater as it drained from the caldera lake was particularly potent at the river outlet from the ice margin, where concentrations may reach toxic levels. The flow rate in the Skaftá peaked at 520 cubic meters per second downstream near the bridge at Eldvatn on 2 September and then declined to 412 cubic meters per second in the afternoon of 3 September. As a result, the ice shelf began to subside around 2300 on 4 September, dropping 1 m by 1145 the next morning, based on GPS data. On 6 September the discharge rate increased rapidly and peaked at 610 cubic meters per second at 1400, then declined later that day. Data suggested that the peak discharge rate on 6 September was due to a second release of water from the eastern part of the caldera lake. On 7 September the flow rate had increased to 520 cubic meters per second. Based on an overflight IMO concluded that the glacial flooding from both the E and W parts of the lake was smaller in volume and flow rates compared to a similar event in 2018. 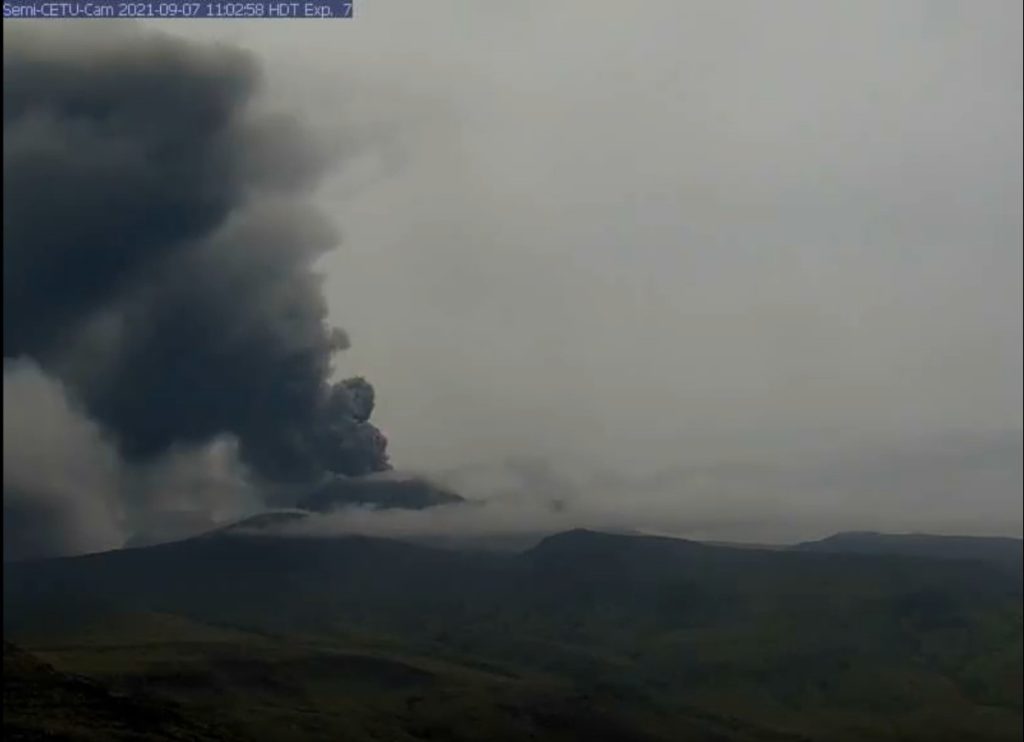 Eruptive activity continues at the north crater of Mount Cerberus on Semisopochnoi Island. Seismicity remains elevated and variable, with periods of continuous tremor, and occasional short-lived explosions of several minutes duration being detected in infrasound data. These explosive events are generating small ash clouds that typically rise from 10,000 to 15,000 ft asl and dissipate within an hour or two (as observed in satellite). Periods of lower-altitude ash emissions, interspersed with robust steaming, were observed in web camera images over the past day. These ash clouds were blown horizontally by the wind with little vertical uplift at altitudes below 5,000 ft asl. Sulfur dioxide emissions continue to be observed in satellite data (once per day). 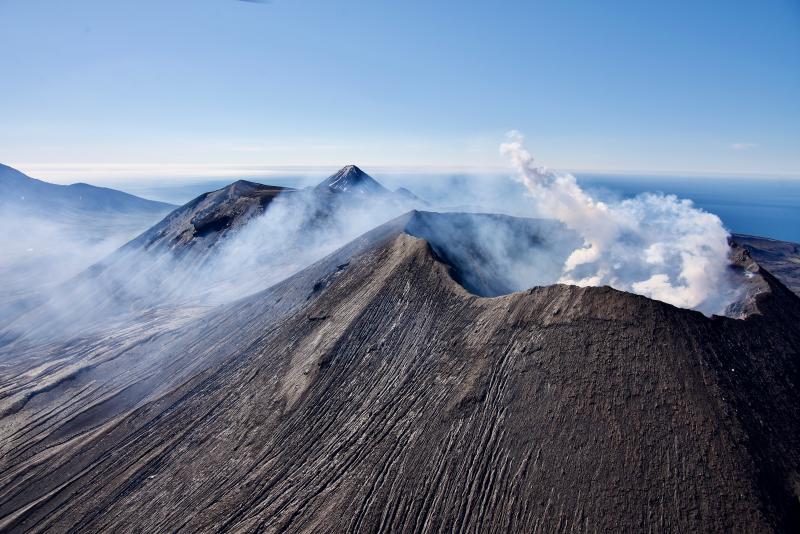 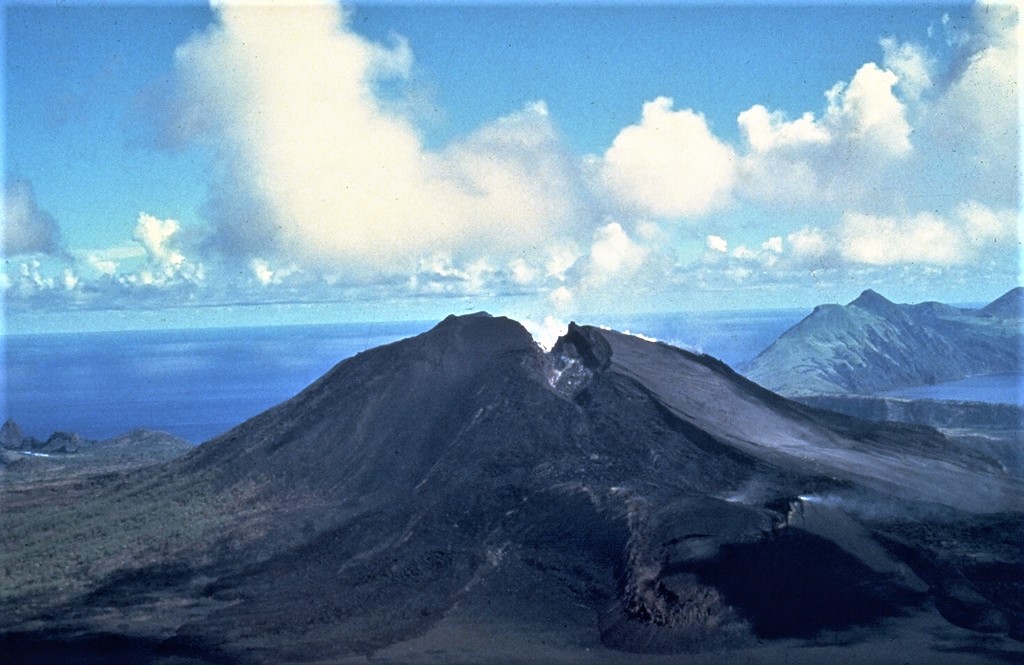 The seismicity parameters associated with the fracturing processes of rigid materials (VT) and fluid dynamics (LP, VLP, TR and EX type events) remained at similar values, with however some intensification of the explosiveness towards the end  of the fortnight.
The highest energy VT-type event, with a local magnitude (ML) of 2.1, was located 1.6 km east-southeast (ESE) of the active crater and at a depth of 5 , 5 km.

From the analysis of the images provided by the surveillance cameras belonging to OVDAS as well as the satellite images, it is observed that the emission of the L5 and L6 flows has been maintained, the fronts of which reach respectively 1380 m and 850 m since the edge of the crater. The average speed of the L5 lava flow was 1 m / h, while the L6 flow did not show any progress during this fortnight. The smallest area of ​​abnormal thermal radiation observed in the L5 casting shows some cooling. However, some heat nuclei remain in the crater area and also in the middle and distal areas of L5 where collapses are common due to their high degree of instability. During this time, the L6 flux retained an area of ​​abnormal thermal radiation at its emission center. 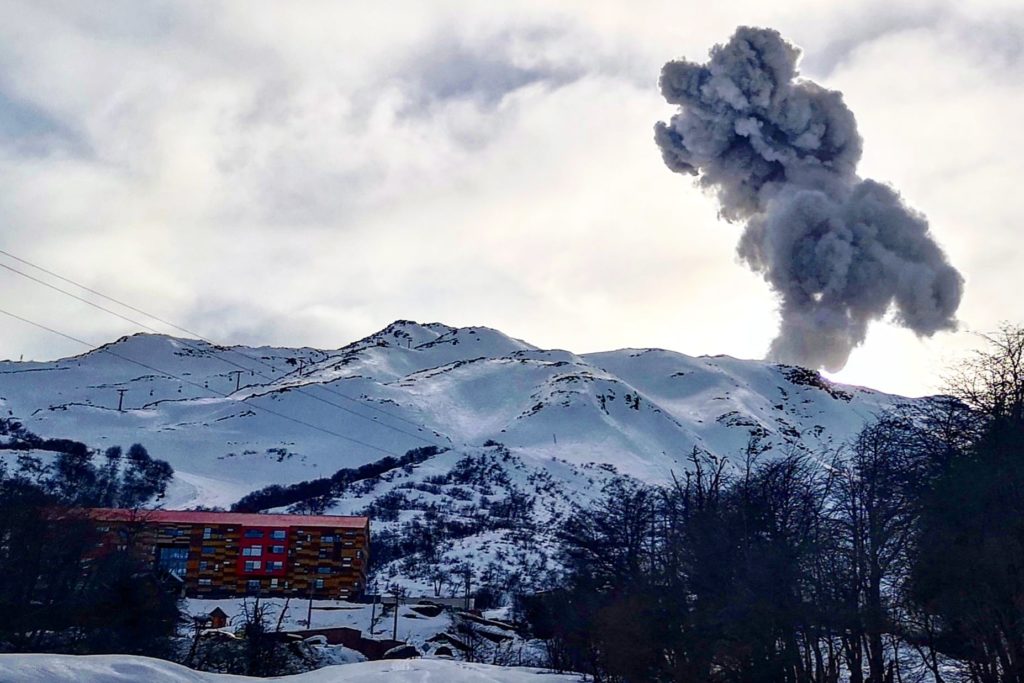 The explosive activity featured maximum column heights of 1080 m. When weather conditions permitted, predominantly whitish columns were observed interspersed with others with moderate pyroclast loading. There is an increase in the intensity of explosive activity, pyroclast charge and incandescence towards the end of the month. Since August 29, the occurrence of lava flow collapses with proximal pyroclastic flows has increased, mainly affecting the ravines northeast of the active crater with a range of 560 m.

According to data obtained by the network of GNSS stations installed on the volcano, a new low-magnitude inflationary process was observed with maximum vertical deformation rates of 0.5 cm / month. The tracking baselines and horizontal components also recorded this process with slight changes in their behavior. The inclinometric stations remained stable except for changes due to climatic conditions.
Five (5) thermal alerts were recorded in the area with a maximum value of 10 MW on August 23, considered low for this volcano. Radiance anomalies were detected on August 31 from the analysis of images from the Sentinel 2-L2A satellite.
Thermal imaging has observed maximum temperatures of 252 ° C in the emission zone during explosions and 100 ° C for the L5 and L6 lava flows. 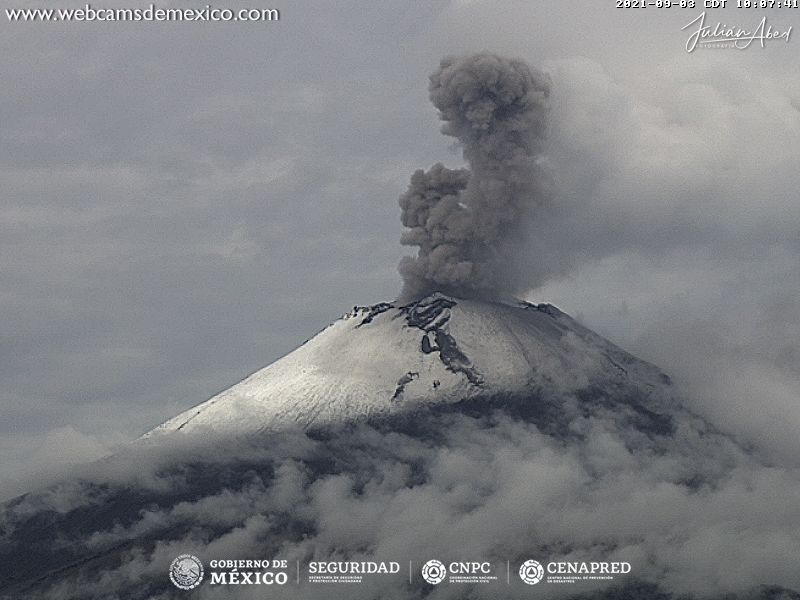 Since this morning and at the time of this report, the crater has been observed with a slight emission of water vapor, gas and light amounts of ash towards the east.

CENAPRED reported that each day during 31 August-7 September there were 66-102 steam-and-gas emissions from Popocatépetl. Cloudy weather often prevented views of the volcano. Crater incandescence was visible during the morning of 1 September and explosions were recorded at 21h35, 22h54, and 23h45 later that same day. The Washington VAAC noted that ash plumes rose to 5.8-6.1 km (19,000-20,000 ft) a.s.l. and drifted NW and W during 5-6 September based on satellite and webcam views. Explosions were recorded by CENAPRED at 16h42 on 5 September and 08h20 on 6 September. Emissions had a low ash content during 6-7 September; explosions occurred at 02h12 and 04h14 on 7 September. The Alert Level remained at Yellow, Phase Two (middle level on a three-color scale). 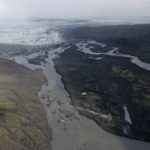 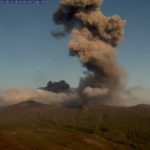