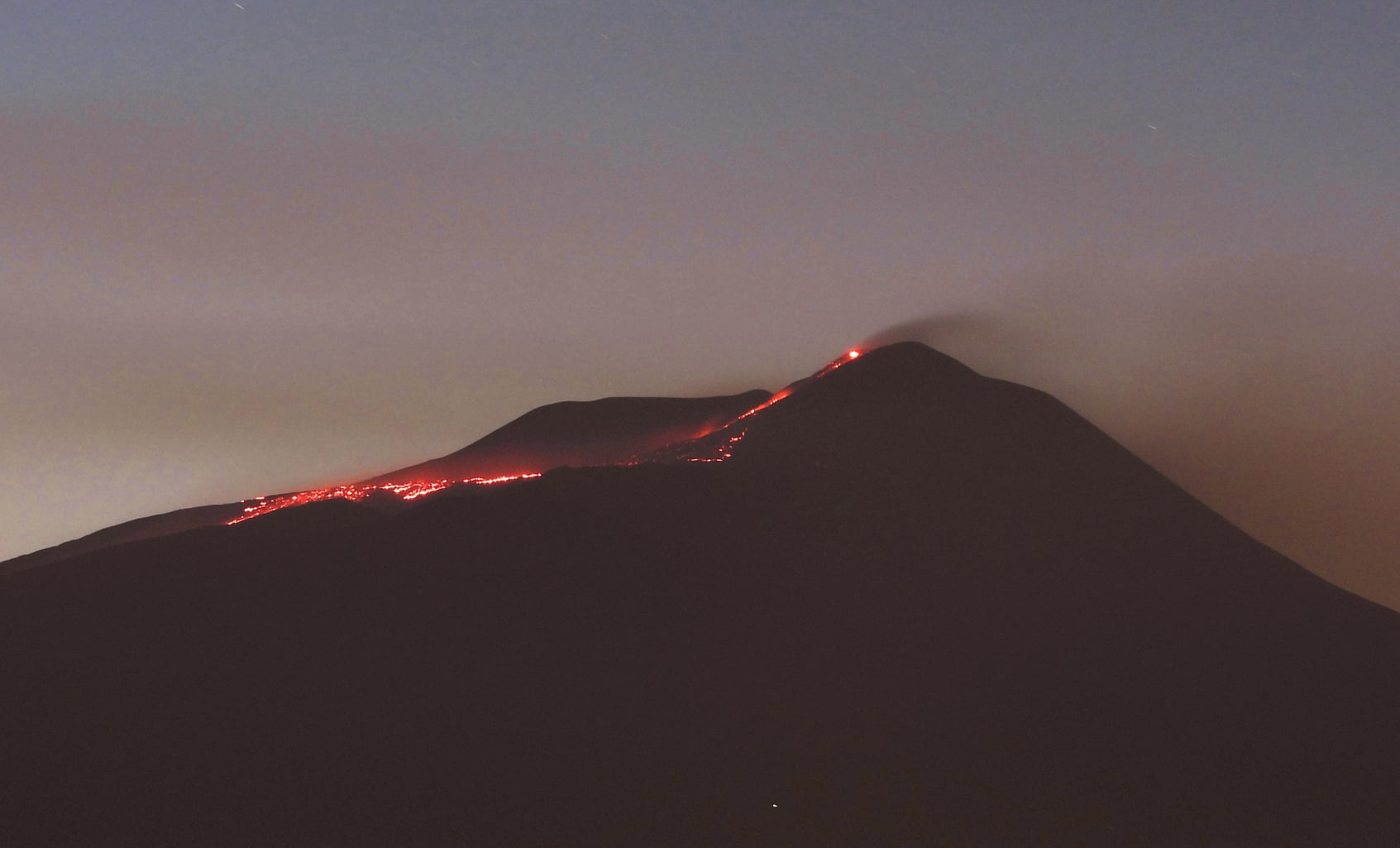 The National Institute of Geophysics and Volcanology, Osservatorio Etneo announces that from 14.56 UTC, a resumption of Strombolian activity is observed at the level of the Southeast Crater.
From around 11:00 UTC, the average amplitude of the volcanic tremor showed a gradual increase and around 2:40 p.m. it reached the high value range. The center of gravity of volcanic tremor sources is located in the area of the Southeast Crater at an altitude of about 2900-3000 m above sea level. Infrasound activity, at present, remains at low levels.
At 14.40 UTC, a very small variation is visible at the upper inclinometer station of the Cratere del Piano (ECP). No variation is visible on the signals of the GNSS network. 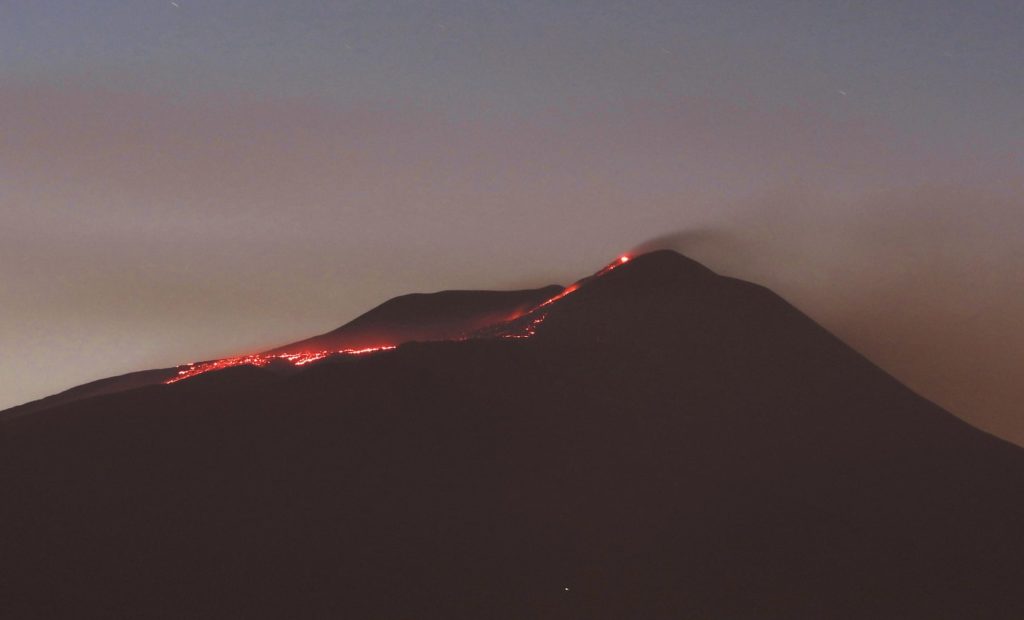 From 15:25 UTC, we observe the passage of Strombolian activity at the lava fountain stage at the Southeast Crater. Based on the forecast model, the eruptive cloud produced by the current activity disperses in the east-south-east direction. In addition, there are two lava overflows that affect the Southwest and North-Northeast sectors, the latter advancing into the upper part of the Valle del Bove.
The average amplitude of the volcanic tremor shows high values ​​with a tendency to increase further. The center of gravity of the volcanic tremor sources is located in the area of ​​the Southeast Crater at an altitude of about 2900-3000 m above sea level. From about 14:50 UTC there was an increase in infrasonic activity which reached high values ​​in both the rate of occurrence of events and their amplitude within a few minutes. Infrasound activity also shows a tendency to increase.
The variation continues at the summit inclinometer station, which has reached an amplitude of approximately 0.3 microradians. No significant variation is observed on the signals of the GNSS network. 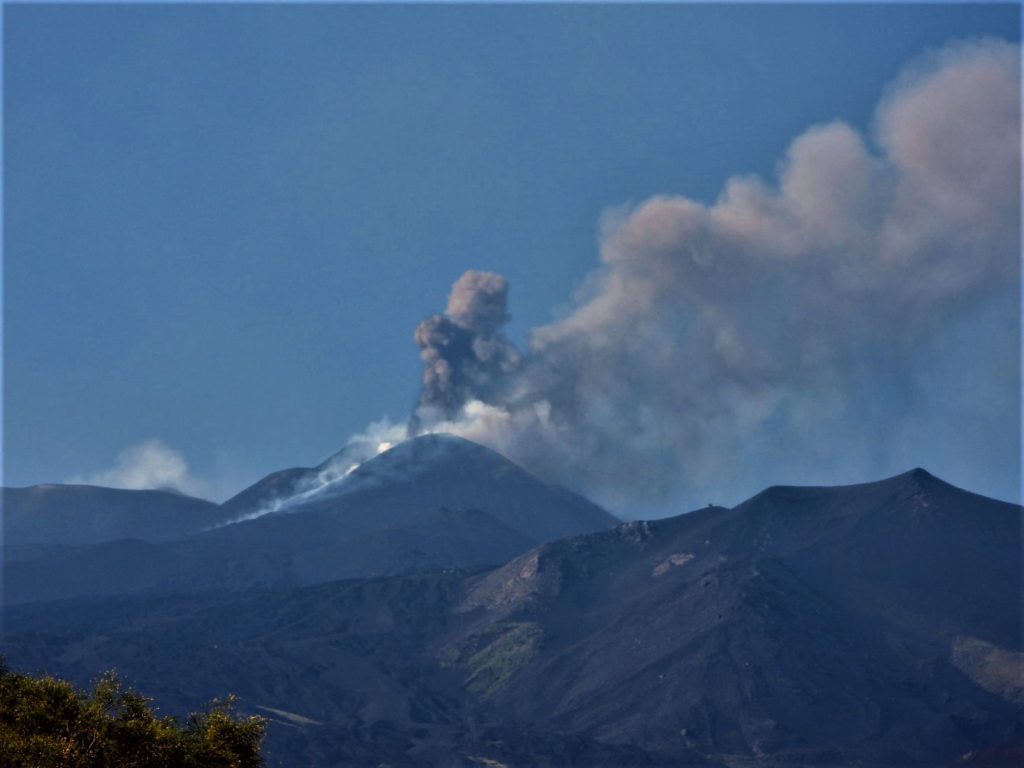 19:22 (17:22 UTC): From 17:00 UTC, the lava fountain of the Southeast Crater has ceased, a weak Strombolian activity with ash emission remains. In addition, only the lava flow of the southwest sector remains supplied.
After reaching the maximum value around 15:50 UTC, the average amplitude of the volcanic tremor showed a gradual decrease, which became much more evident from 16:40 UTC. Currently, this parameter has almost reached the range of average values, showing a further downward trend. The center of gravity of volcanic tremor sources is located in the Southeast Crater area at an altitude of about 2900 m above sea level. Along with the changes in tremor, infrasound activity has also showed a sharp decrease and at present it has reached a low level.
The variation at the summit tilt station reached the maximum amplitude of about 3 microradians at 16:50 UTC and then stabilized.

23:46 (21:46 UTC): Effusive activity on the southwest flank of the Southeast Crater produced by the lava overflow cools.

In a surprise move, activity at Fagradalsfjall (part of the Krýsuvík-Trölladyngja volcanic system) started to increase again around 4:00 p.m. UTC on 07/02 and again lava was seen in the crater after emptying overnight. .

Normally, when the edges of the crater collapse in this manner, the eruption is normally over. In this case, the magma cleared the rocks of the collapse within hours, and the eruption started again as pressure built up again in the deep magma system. The harmonic tremor has increased again since 4:00 p.m. UTC. I don’t know if he has reached his maximum yet. It is possible, but difficult to be sure.
Currently there is a lot of lava flowing in Nátthagi and possibly also in Geldingadalir which is already full of lava and is about to overflow at the lowest points in the coming days. 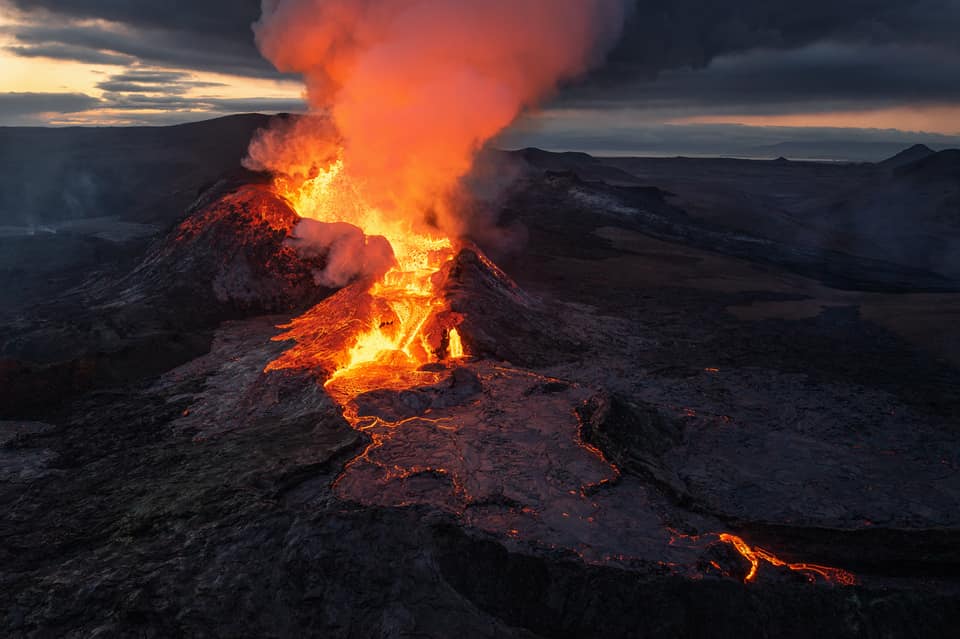 July 05 , 2021 : The volcano near Fagradalsfjall on the Reykjanes peninsula is erupting strongly after appearing to stop completely for a while on Friday afternoon, Met Office natural hazards expert Sigurdís Björk Jónasdóttir assures.
Activity levels remained low for most of the weekend, before intensifying yesterday evening. The level of activity has been classed as high all night and so far today. « The crater is bubbling away nicely and lava has started flowing with force, » Sigurdís says.

Recent work and news
For the first time since April 2018, before its current cycle of frequent eruptions, Steamboat Geyser did not experience any eruptions during a calendar month. Over the past few months, the time between eruptions has been increasing, instead of decreasing as has been the case during the summers of 2018, 2019, and 2020. This may indicate that the present period of frequent eruptions is coming to a gradual close, although current minor eruptions at the geyser suggest that the period of major eruptions is not yet completely over. The total number of eruptions for the year remains at 12. 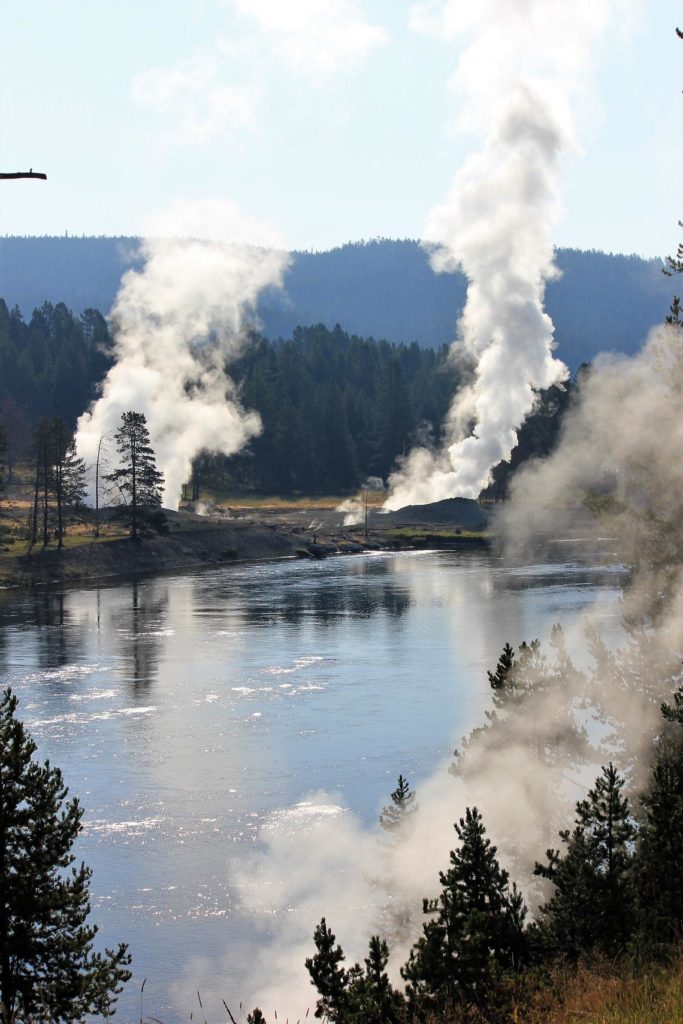 June field work by Yellowstone Volcano Observatory scientists included the deployment of 140 temporary seismic stations by the University of Utah in Norris Geyser Basin. The project builds on previous experiments in 2018 and 2019, covering a broader area that will allow seismologists to “see” deeper beneath the surface. The work aims to better understand the connection between Steamboat Geyser and Cistern Spring, as well as more general patterns of subsurface water flow at Norris Geyser Basin. In addition, two semi-permanent GPS stations were set up, near Mount Washburn and Mary Mountain, bringing the number of deployed semi-permanent GPS stations to 17. These stations are installed every spring and recovered in the fall, operating during the period of largely snow-free conditions, and they serve to augment the network of continuous GPS stations, which operate year-round.

Seismicity
During June 2021, the University of Utah Seismograph Stations, responsible for the operation and analysis of the Yellowstone Seismic Network, located 445 earthquakes in the Yellowstone National Park region. While above average for a month, this is by no means unprecedented. For example, over 1100 earthquakes were recorded during the month of June 2017! The largest event of the past month was a minor earthquake of magnitude 3.1 located 11 miles northeast of West Yellowstone, MT, on June 28 at 8:29 AM MDT. This event is part of a sequence of earthquakes in the same area that began on June 19. 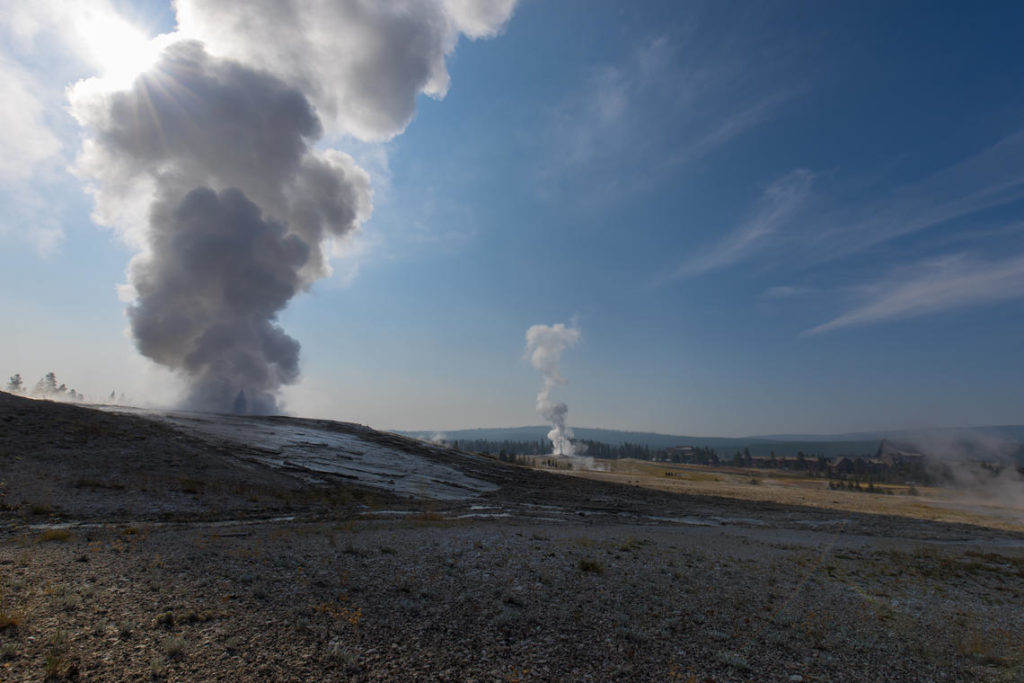 Giantess Geyser in eruption at approximately 10:00 AM MDT on August 26, 2020. Old Faithful is erupting in the center background.

Ground deformation
Subsidence of Yellowstone Caldera, which has been ongoing since 2015, slowed during May/June 2021, reflecting seasonal groundwater recharge. Every summer, water from snowmelt causes the ground to swell slightly, resulting in a pause in subsidence trends or even a minor amount of uplift (less than 1 cm / fraction of an inch). In the area of Norris Geyser Basin, no significant uplift or subsidence has been detected by a nearby GPS station since the start of 2020.

During the past 24 hours, the Taal Volcano’s sensor network has recorded thirty-nine (39) volcanic earthquakes, including two (2) volcanic tremor events with durations of three (3) to five (5) minutes. , thirty-five (35) low frequency volcanic earthquakes, two (2) hybrid earthquakes and one low level background tremor that has persisted since April 8, 2021. 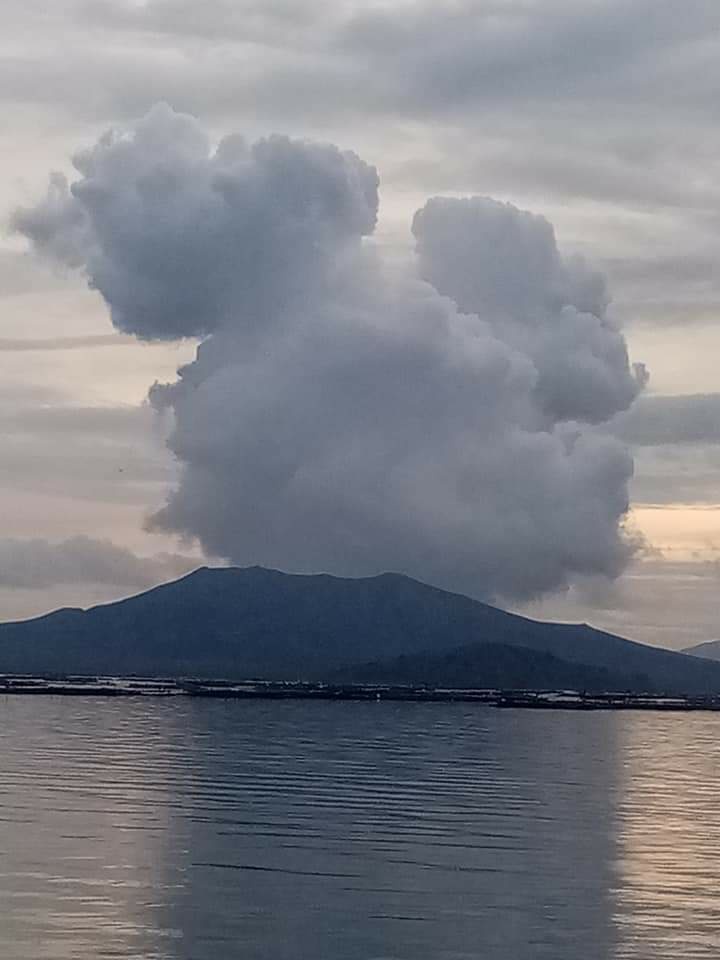 High levels of volcanic sulfur dioxide or SO2 gas emissions and vapor-rich plumes that reached up to three thousand (3000) meters high before drifting south and east were generated at from the main crater of Taal. Sulfur dioxide (SO2) emissions averaged 5,299 tonnes / day on July 5, 2021. Based on soil deformation parameters from electronic tilt, continuous GPS and InSAR monitoring, the Taal volcano island began to deflate in April 2021 while the Taal region continues to experience a very slow expansion since 2020. 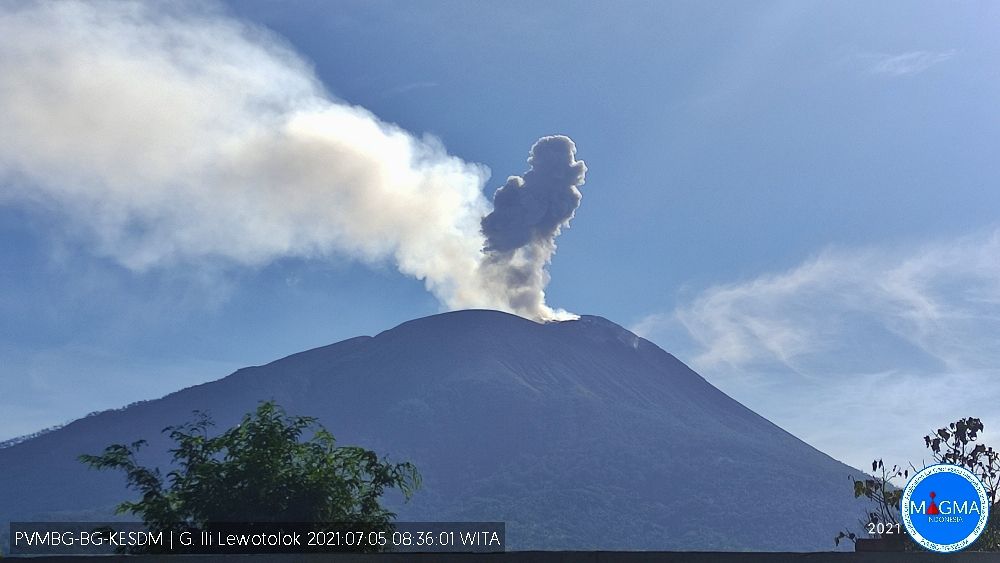 Level of activity Level III (SIAGA) since November 29, 2020 at 1:00 p.m. WITA. This increase in status was motivated by an eruption on November 27, 2020 at 05:57 a.m. WITA with a height of gray / black ash columns observed at 500 m above the peak (1923 m altitude) with a strong intensity, oriented towards the west. This eruption was recorded on a seismogram with a maximum amplitude of 34 mm. The duration of the eruption was not clearly observed as it was followed by continuous tremors. Eruptions still occur today.
The volcano is clearly visible until it is covered in fog. The smoke from the main crater is white / gray with moderate to strong intensity, about 50-1000 meters above the summit. The weather is sunny, the wind is weak to moderate to the west and northwest. The air temperature is approximately 21.8 to 36.2 ° C. An eruption was observed with a height of 300 m above the summit, the color of the smoke was gray, the eruption was accompanied by bursts of incandescent lava and a weak to strong roar.

According to the seismographs of July 5, 2021, it was recorded: 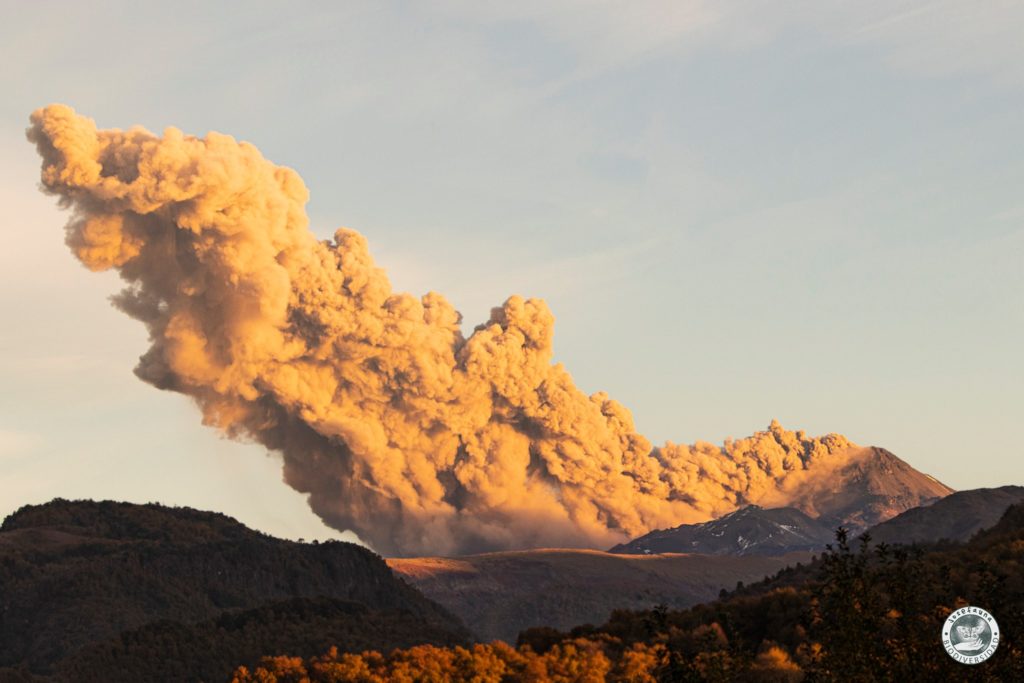 Maximum column height: 180 m above the emission point.
Direction of dispersion: Not observed. 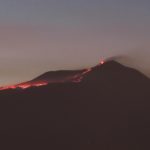 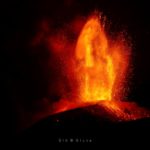