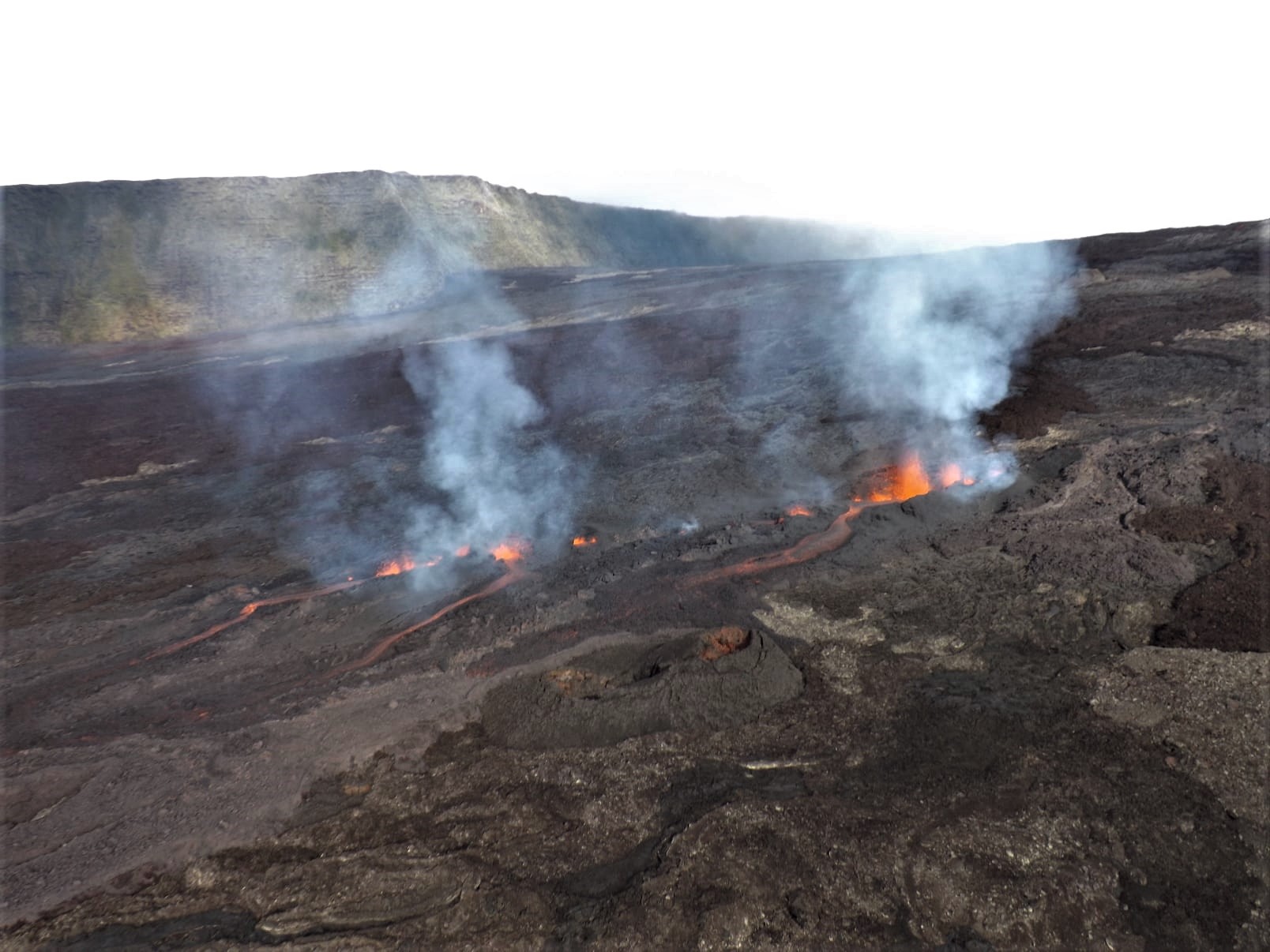 A new crack opened at the Geldingadalur eruption sites last night. According to a nature conservation expert from the Icelandic Meteorological Bureau, it is believed to have opened around three a.m. last night. 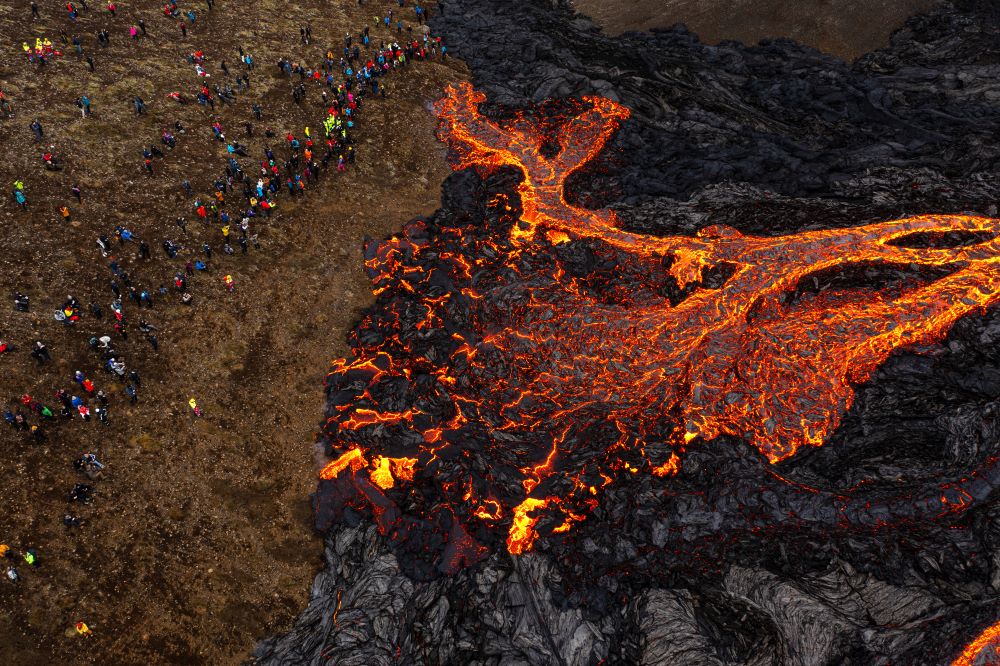 A new crack in the middle of the lava.

The new crack that opened at the eruption site last night is halfway between the two that opened, one at Easter and Wednesday evening. Salóme Jórunn Bernharðsdóttir, a nature conservation specialist at the Icelandic Meteorological Office, says the new crack is from lava from the Easter Crater. It doesn’t change the scene in the volcano danger zone. The new fissure merges with the lava flows from the crater and flows into Geldingadalur. 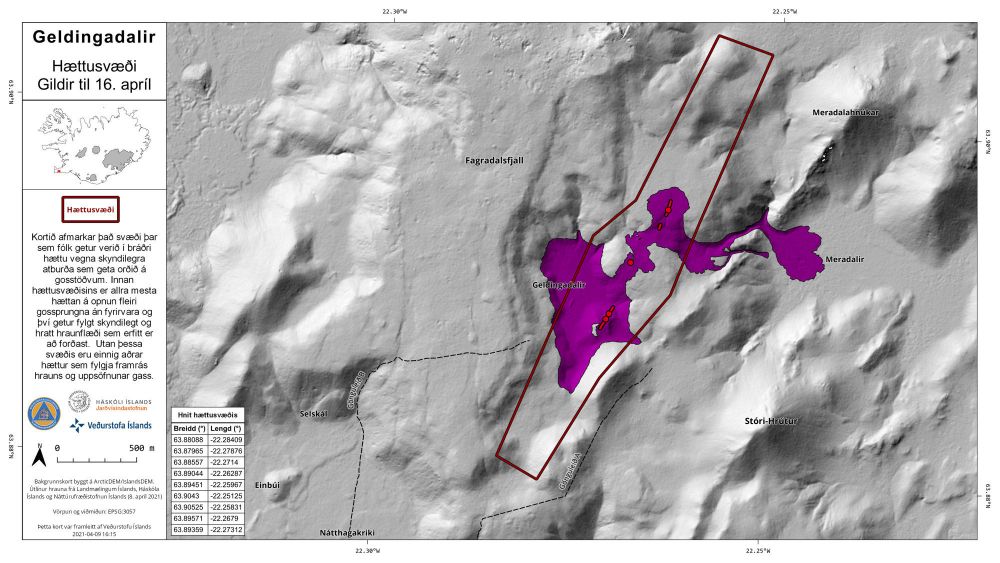 We can assume that lava will flow there today. Stakeholders in the area are investigating the situation and in a follow-up meeting this morning it was stated that there was considerable activity from the new crack and activity from the crack that opened Wednesday had declined. 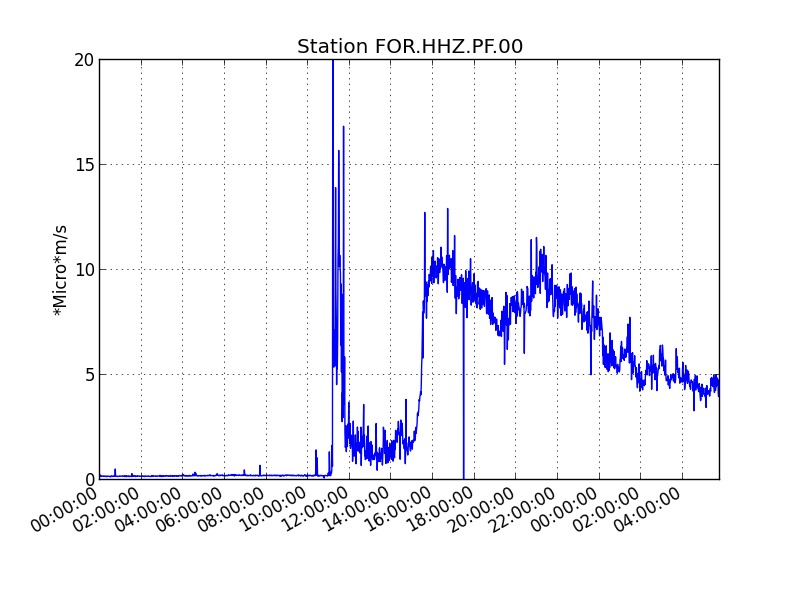 Figure 1: Evolution of the RSAM (indicator of the volcanic tremor and the intensity of the eruption) since 04/09/2021 on the FOR seismological station located at the level of the Château Fort crater (© OVPF / IPGP).

Following an overview of the eruptive site carried out this morning with the assistance of the SAG and the PGHM, the eruptive fissure could be located with precision, 700 m southwest of the Château Fort crater.
During the flyby, around 8:40 a.m. local time, activity focused on two main eruptive vents in which several regimes of lava fountains were observed. The upstream part of the crack is no longer active. The lava fountains did not exceed thirty meters in height. 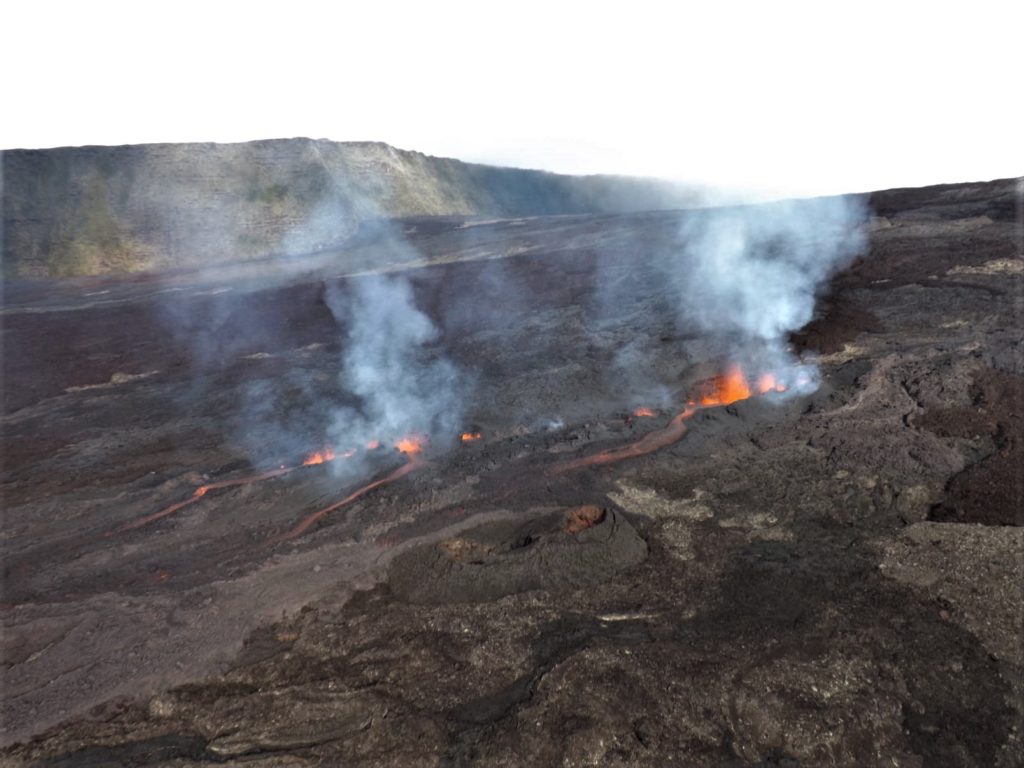 The flow had traveled about a mile to the east and the flow front, consisting of aa lava, was spreading very slowly. It was this morning at 8:40 am around 1800 m altitude.

In the past 24-hour period, the Taal Volcano Network recorded two hundred sixteen (216) volcanic earthquakes, including one hundred seventy-seven (177) episodes of volcanic tremor having durations of one (1) to thirty-two (32) minutes, thirty-nine (39) low frequency volcanic earthquakes and low-level background tremor that started at 9:05 AM on 08 April 2021. Activity at the Main Crater consisted of very weak emission of steam-laden plumes from fumarolic vents that rose five (5) meters. 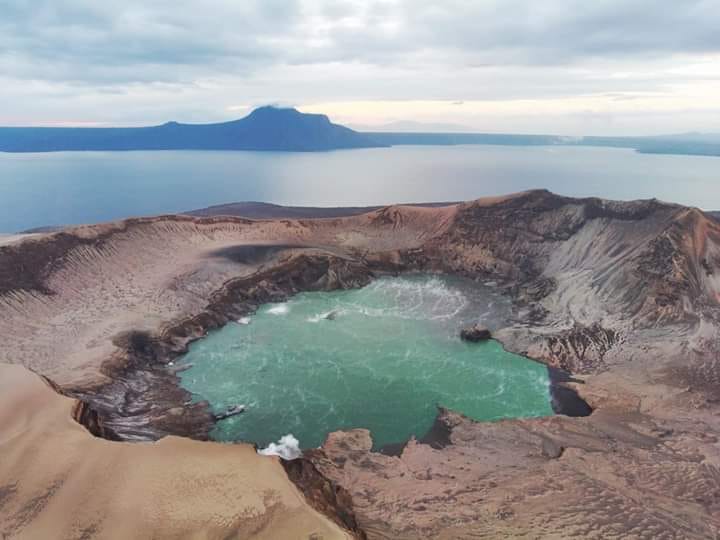 Sulfur dioxide (SO2) emission averaged 1,932 tonnes/day yesterday, 10 April 2021. Temperature highs of 71.8°C and pH of 1.59 were last measured from the Main Crater Lake respectively on 04 March and 12 February 2021. Ground deformation parameters from electronic tilt, continuous GPS and InSAR data analysis indicated a very slow and steady inflation and expansion of the Taal region since after the January 2020 eruption. These parameters indicate persistent magmatic activity at shallow depths beneath the edifice.

Activity:
The Pacaya Volcano Observatory reports that due to the weather conditions that have prevailed in the region since last night, it has not been possible to observe the activity in the Mackenney crater, nor to perceive any associated sound. The probability that there will be new emissions of ash and magmatic gas from the Mackenney Crater or the fissure on the western flank, which could cause ash falls in the communities on the northern flank of the volcano, is not excluded. Effusive activity continues to feed the lava flow on the western flank, which continues to advance along its entire front, particularly to the north and west in the La Breña sector, and to the west and to the west. South in the farm of Campo Alegre, near the villages El Patrocinio and San José El Rodeo, respectively 400 and 250 meters from each. The seismic stations around the volcano record the tremor produced by the rise of magma and the movement of the lava flow on the surface. It is not excluded that new lava flows or larger eruptive columns will appear in the coming hours or days, as the level of volcanic activity remains high. 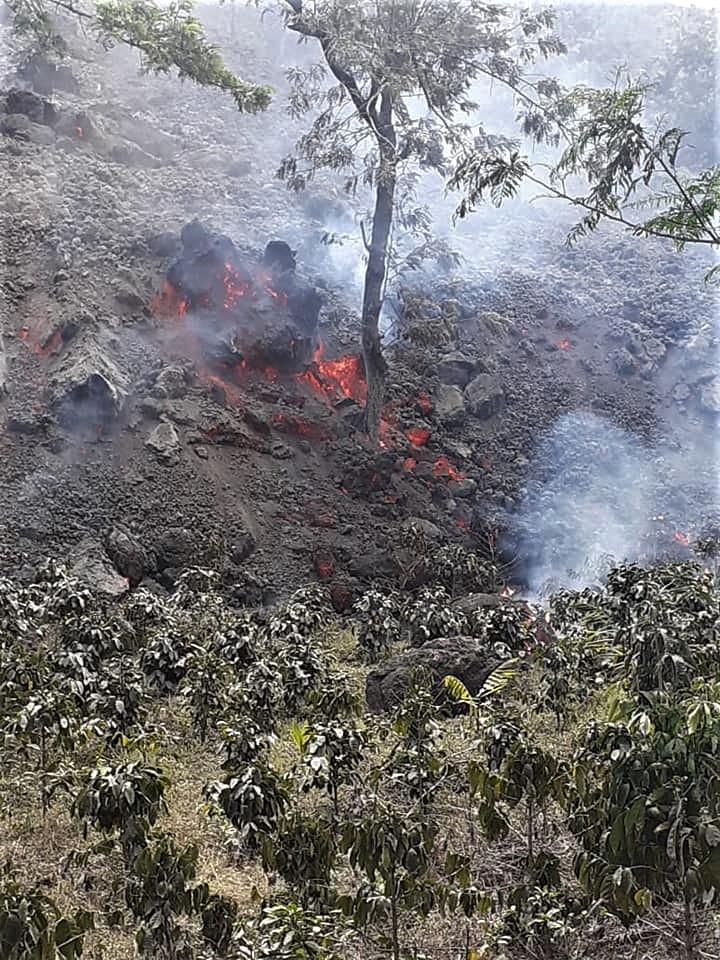 According to the daily volcanological bulletin published on Friday, April 9 in the morning by the scientific entity of the CONRED system, the Pacaya volcano presents a weak and moderate degassing in the Mackenney crater and ash which rise to 2700 meters of altitude. These ashes are heading north and northeast, for about 1.5 km, added the National Institute of Seismology, Volcanology, Meteorology and Hydrology -INSIVUMEH- (the scientific body of the country) in his report. With regard to the lava flow, CONRED, through the Volcanic Prevention Unit -UPV-, maintains its attention on it, which continues its advance towards the West for a length of approximately 3700 meters. Even if vigilance has been maintained by the authorities, while an appeal is made to the population, they continue to approach the area to be able to see the flow while risking their own lives. 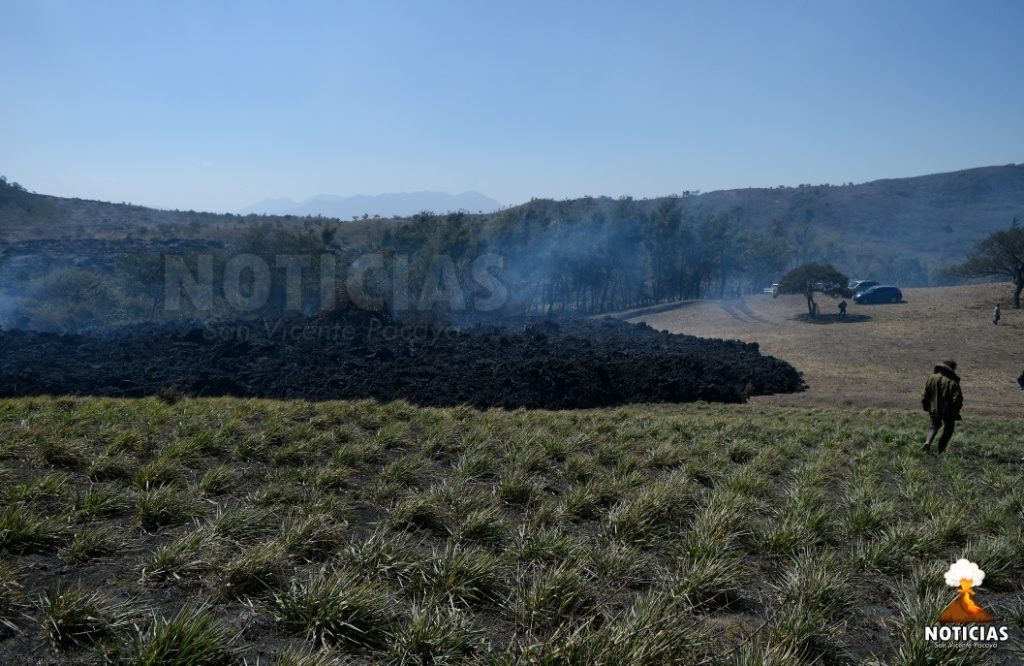 The authorities of the municipality, Conred, Insivumeh and the neighbors of the community of El Patrocinio, are in the area where the rivers of lava are located, area where machines are already working to try to divert them, and so to prevent them from entering the village.
Source : Insivumeh , Conred .
Photo : Volcan Pacaya. Noticias San Vincente Pacaya .

The amplitude of the tremor peaked between 8 pm and midnight on 9 April and slowly declined over the next few hours. There were some periods of increased amplitude during the decline, associated with pulses in the ash venting.

A small number of volcano-tectonic, long-period and hybrid earthquakes were recorded during the tremor. 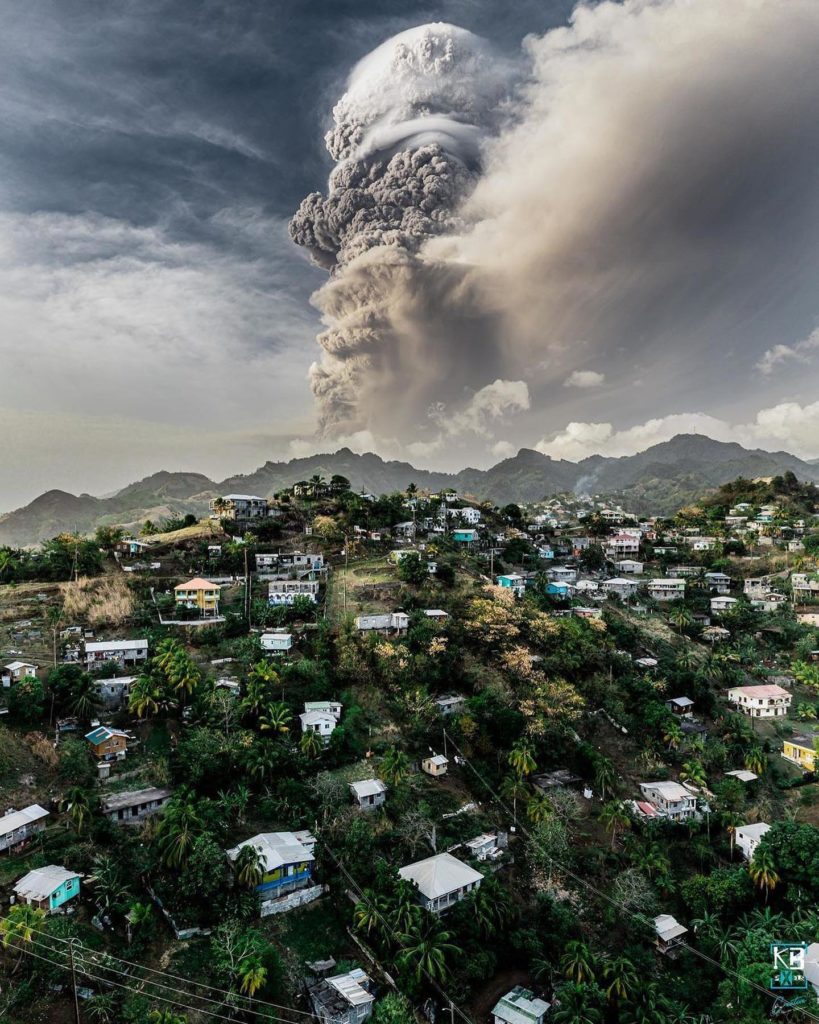 Audible rumblings accompanied by ash venting occurred throughout most of the night with ashfall reported throughout the island.

The volcano has entered an explosive eruptive phase that may continue over the next few days and weeks. Explosions are expected to be of similar or greater magnitude.

Seventy-eight shelters with more than 3000 occupants are now fully operational.

Other evacuees have sought shelter with family and friends.

OBSERVATION RESULTS
Visual
The weather around Mount Merapi is generally sunny in the morning and evening, while the afternoon until evening is foggy. There is white smoke, thin to thick with low pressure. A maximum smoke height of 200m is observed from the Mount Merapi observation post in Kaliurang on April 4, 2021 at 6:15 a.m. WIB.
Hot avalanche clouds occurred 13 times with an observed slide distance of 1500 m to the southwest and were recorded on a seismogram with a maximum amplitude of 59 mm and a duration of 141 seconds . It was reported that a light rain of ash occurred in Ngipiksari, Klangon and Deles on April 3, 2021. Lava avalanches were observed 119 times with a maximum slide distance of 1,100 meters to the southwest and 3 times to the South-East with a sliding distance of 300 m.
Morphological analysis of the peak area based on photos of the southwest sector from April 1 to April 7, 2021, shows a change in the morphology of the peak area due to effusion activity and growth of the dome. The volume of the lava dome in the southwest sector is 1,098,000 m3 with a growth rate of 12,800 m3 / day. Morphological analysis of the peak area based on photos of the Southeast sector shows that the height of the central dome is 75 m. 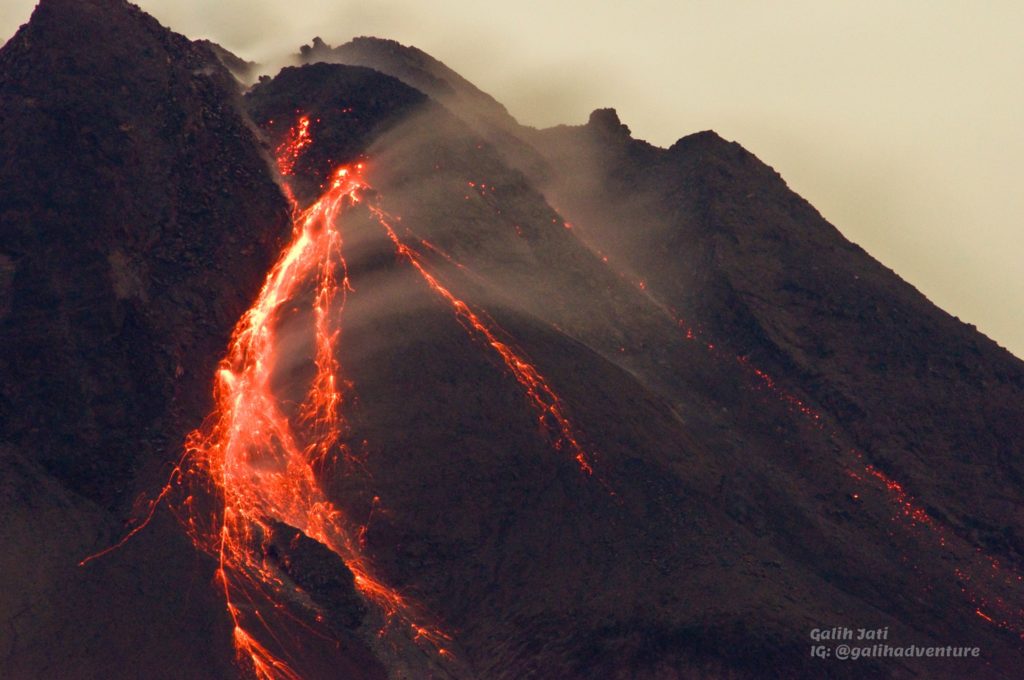 Rain and lahars
This week there was rain at Mount Merapi Observation Post with the highest rainfall intensity of 98mm / hour for 50 minutes at Kaliurang Post on April 6, 2021. There was no rain. lahars or additional flow in the rivers that descend from Mount Merapi. 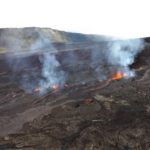 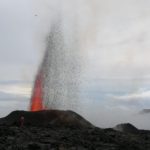