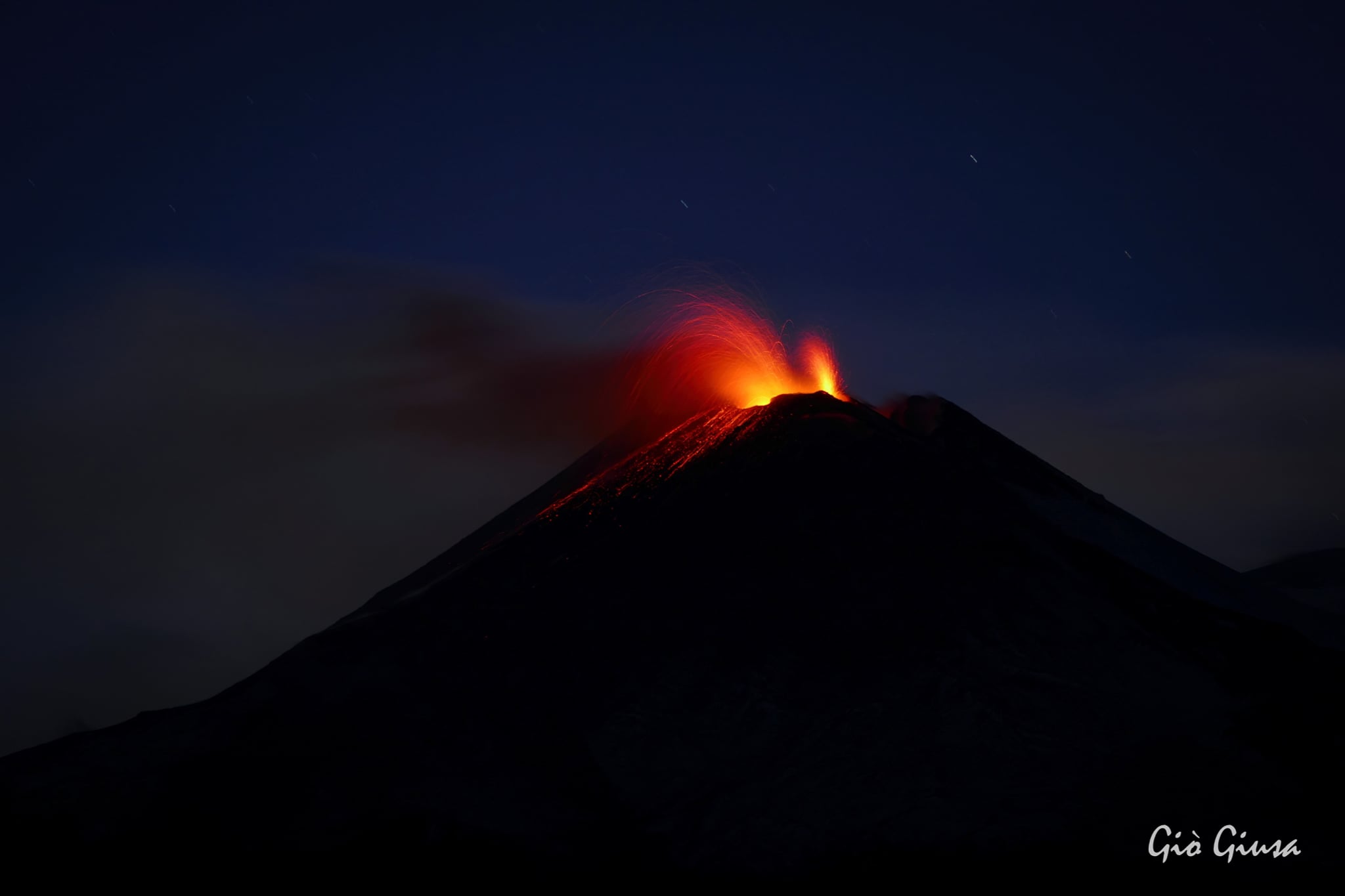 In the light of surveillance data, it is highlighted:
1) VOLCANOLOGICAL OBSERVATIONS: Strombolian activity of variable intensity and low volcanic ash emissions at the Southeast Crater. Intra-crater strombolian activity with sporadic and diluted ash emissions and intra-crater effusive activity at the Voragine crater. Strombolian intracrater activity at the Bocca Nuova crater and at the Northeast crater with occasional and diluted ash emissions.
2) SEISMOLOGY: Seismic activity of moderate fracturing. Amplitude of the tremor on high or medium-high values. 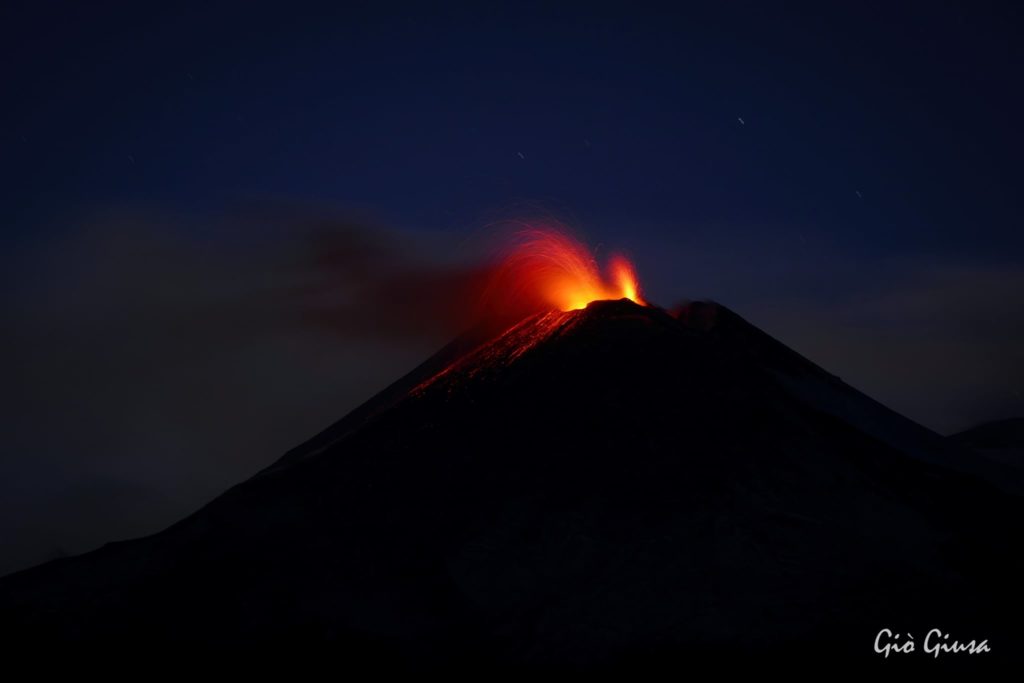 3) INFRASOUNDS : high infrasound activity
4) DEFORMATIONS: No significant change was detected from the tilt and GNSS networks
5) GEOCHEMISTRY: SO2 flux: medium-high level
HCl flux: Data not available, the latest measurements are at a medium-high level
The CO2 flux from the soil is at average levels.
The partial pressure of dissolved CO2 does not show significant changes.
There are no updates for the C / S report.
The isotopic ratio of helium is at medium-high values ​​(last update 27/01/2021).
6) SATELLITE OBSERVATIONS: The thermal activity in the summit area is at a moderate level.

VOLCANOLOGICAL OBSERVATIONS
During the week, the monitoring of the volcanic activity of Etna was carried out by analyzing the images of the surveillance cameras of the INGV, Osservatorio Etneo (INGV-OE). Due to the adverse weather conditions that characterized most of the week, the observation of volcanic activity by cameras was discontinued. 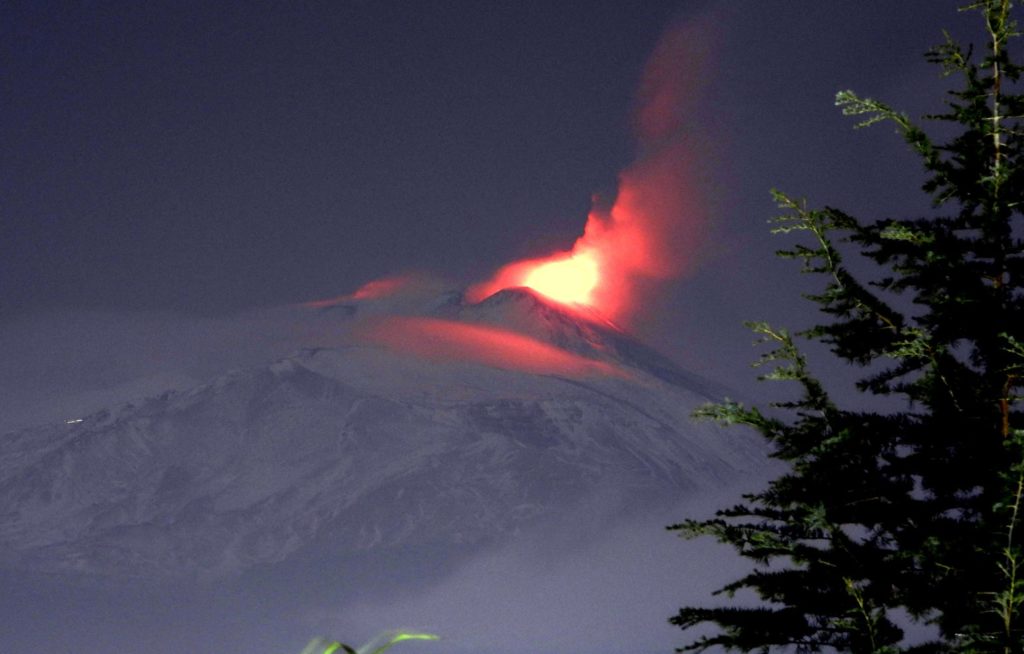 In general, during the period under review, the activity of Etna followed the behavior of the previous weeks with an eruptive activity of varying intensity in the four summit craters.
Notably, the Southeast Crater produced continuous Strombolian activity from at least three explosive vents. The strombolian activity was of variable intensity, with more energetic phases which alternated with phases characterized by a low energy of the explosions, to the point of becoming almost an intracrater activity. During the most energetic phases, Strombolian activity was very intense and accompanied by splashing from the active vents in the eastern sector of the summit of the Southeast Crater, with remarkable projections of lava remains above the vents and fallout and product accumulation mainly on the top of the northeast side of the cone. The vent active in the southern sector of the cone was mainly characterized by discontinuous Strombolian activity of lower intensity than the other two vents. The sporadic and weak ash emissions observed, mainly produced by the activity of the eastern vents, quickly dispersed in the summit area.

During the observation period, the Voragine crater was characterized by almost continuous Strombolian activity, with explosions that also threw the products above the crater rim and by rare and dilute ash emissions that quickly dispersed in the summit area.
In addition, from satellite images from January 27, 2021, it was possible to observe a small lava flow which, fed by an active vent in the northern sector of the Voragine crater, flowed into the crater of the Bocca Nuova.
During the week, the Bocca Nuova crater also produced Strombolian activity with explosions that often exceeded the edge of the crater, and rare emissions of very dilute ash that quickly dispersed into the atmosphere.
Finally, the Northeast Crater (NEC) fed an intracrater Strombolian activity of variable intensity, which created at night a discontinuous glow observable by cameras, and rare emissions of very diluted ash. 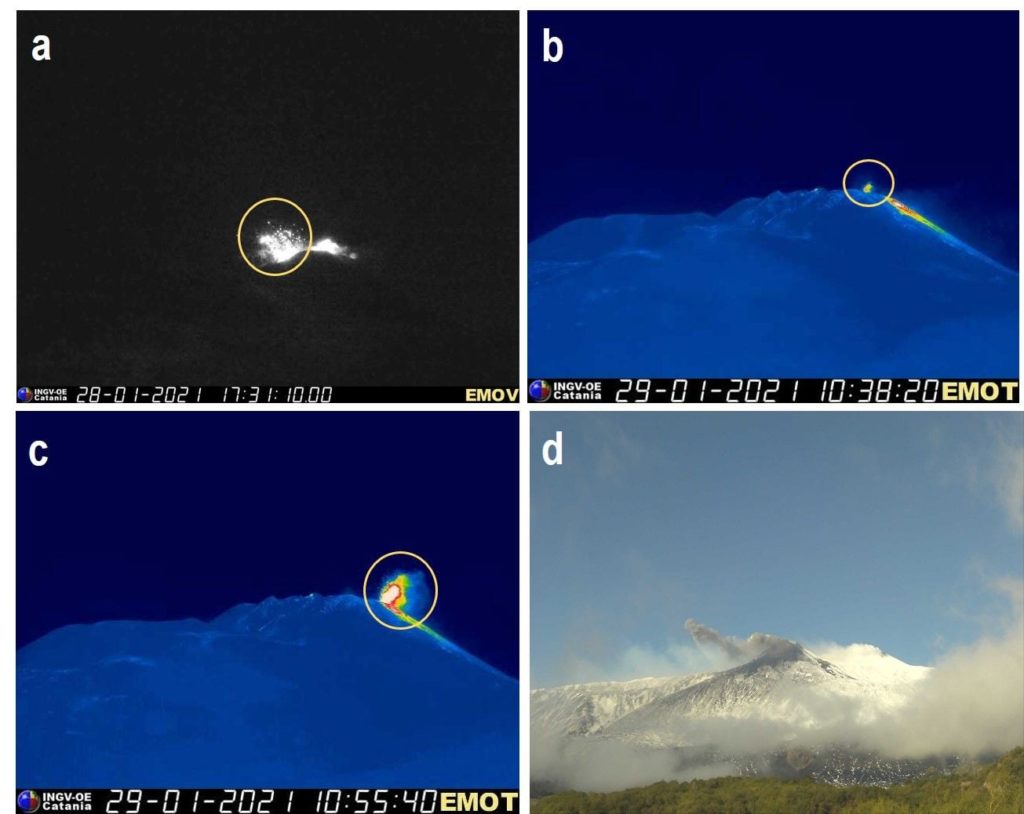 a) Strombolian explosion of the active vent in the southern sector of the Sud-Es crater observed by the camera visible from Montagnola (south); (b) and (c) Strombolian explosions of the two active vents in the eastern sector of the Sud-Es crater, both recorded by the thermal camera of Montagnola (South); (d) ash emission episode from the South-Es crater recorded on January 28, 2021 at 08:45 UTC by the camera of Mrte Cagliato (East).

Volcanic tremor:
During the week, the average amplitude of the volcanic tremor showed significant fluctuations, remaining at high values for most of the week and showing a slight decrease on Sunday January 31 when it reached medium-high values.
The source of the tremor is located in the area of the Southeast crater, at an altitude of between about 2700 m and about 2900 m above mean sea level

SUMMARY OF THE STATE OF THE ACTIVITY.

In the light of surveillance data, it is highlighted:
VOLCANOLOGICAL OBSERVATIONS: Normal explosive volcanic activity of Strombolian type with projection activity in the North zone. The total frequency of events showed values ​​ranging from medium-high levels (16 events / h) to high levels (22 events / h). The intensity of the explosions was mainly medium-low in the North crater area and medium-high in the Center-South area.
2) SEISMOLOGY: The monitored seismological parameters do not show significant variations.
3) DEFORMATIONS: No significant change was detected from the tilt and GNSS networks
4) GEOCHEMISTRY: SO2 flux: medium level
C / S ratio: the values ​​are at high levels (C / S = 15.2).
The isotope ratio of He is at high values ​​(R / Ra = 4.41 reported at the January 21, 2021 sampling).
5) SATELLITE OBSERVATIONS: The thermal activity in the summit area is at a medium-low level.

VOLCANOLOGICAL OBSERVATIONS
During the observation period, the eruptive activity of Stromboli was characterized by the analysis of the images recorded by the surveillance cameras INGV-OE located at an altitude of 190 m, Punta Corvi and 400 m.

In the area of ​​the north crater, the N1 crater, with two emission points, produced low intensity explosions (less than 80 m high) emitting fine materials (ash) sometimes mixed with coarse materials (lapilli and bombs ). The N2 vent, at four emission points, showed mainly low and medium-high intensity explosive activity (sometimes the products reached 250 m in height) emitting coarse materials. In addition, continuous blasting activity was observed at the N2 vent which for long periods of time was very intense both in terms of frequency and height reached by the lava scraps. The average frequency of explosions varied between 12 and 20 events / h.
In the Center-South zone, the explosions were ash emissions of medium and sometimes high intensity (the products reached 250 m in height). The explosive activity showed hourly frequency values ​​between 2 and 4 events / h.

Remote monitoring of the vent area at Whakaari / White Island that erupted in December 2019 has revealed that the temperatures of gas emissions has declined from over 700 oC to 300 oC in the last year. Recent observations suggest no eruptive activity since a series of minor steam explosions on 29 December 2020. Current activity is still characterised by steam and gas emissions at moderate-low levels. The Volcanic Alert Level remains at 1.

Over the last year, a series of thermal infrared images have been regularly collected by helicopter to observe the temperature of steam and gas vents. These temperatures have shown a gradual decline since the December 2019 eruption, from over 700 °C in February 2020 to 300 °C on 21 January 2021. The gas emission temperatures are now similar to temperatures measured in July 2018.

During January 2021, GNS Science continued monitoring of Whakaari/White Island by observation flights and measurement of gas emission rates, and with automatic earthquake, camera, and ground deformation observations. These recent observations confirmed there is no evidence of recent eruptive activity, or signs of collapse in or near the active vents. There is little water ponded on the floor of the 1978/90 Crater.

Volcanic steam and gas continue to be emitted from active vents and lava extrusions in the area that erupted in December 2019. The most recent observations are some of the lowest gas emissions measured since the 2019 eruption and are now close to those observed in early-2019. 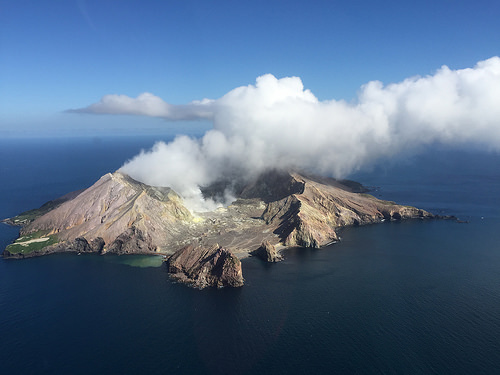 The Volcanic Alert Level remains at 1 and the Aviation Colour Code remains at Green. 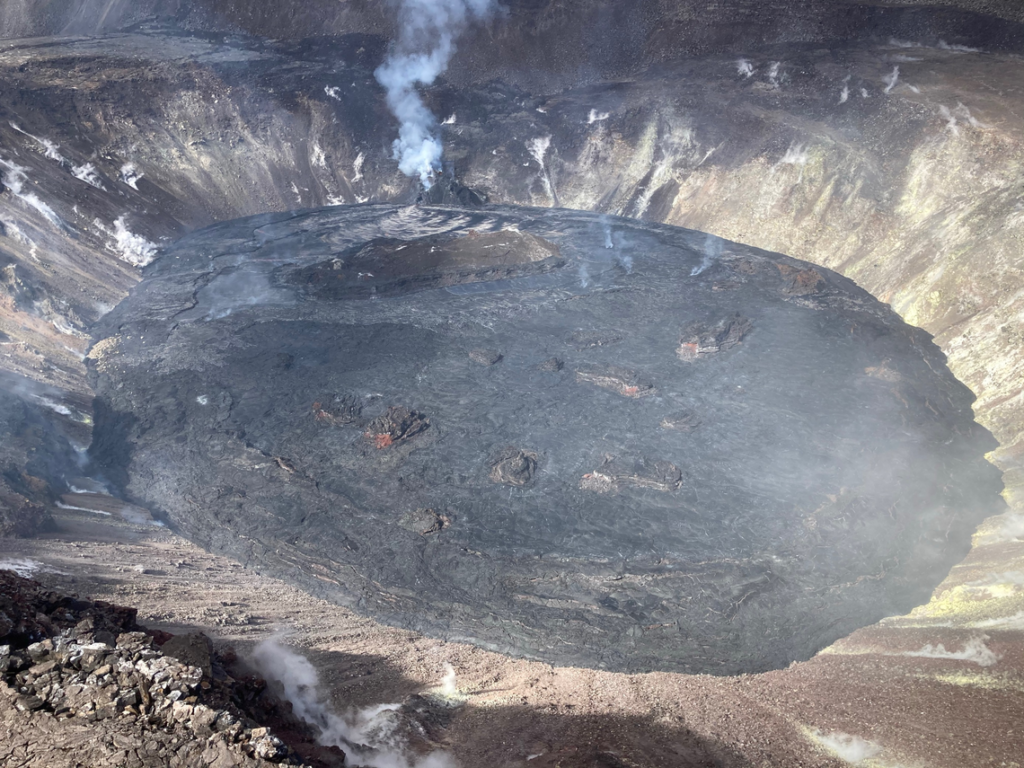 A closer view of the lava lake in Halema‘uma‘u crater from the helicopter. Most of the lake surface in the foreground (east) is solidified on the surface, with active lava limited to the western end of the lake, in the distance. Rockfall debris can be seen on the southern margin of the lake (left side of photo).

Activity Summary:
Kīlauea Volcano is erupting. Lava activity is confined to Halemaʻumaʻu with lava erupting from a vent on the northwest side of the crater. As of the morning of February 2 lava has filled about 213 m (699 ft) of Halemaʻumaʻu and only the western portion of the lava lake is active. SO2 emission rates remain elevated. 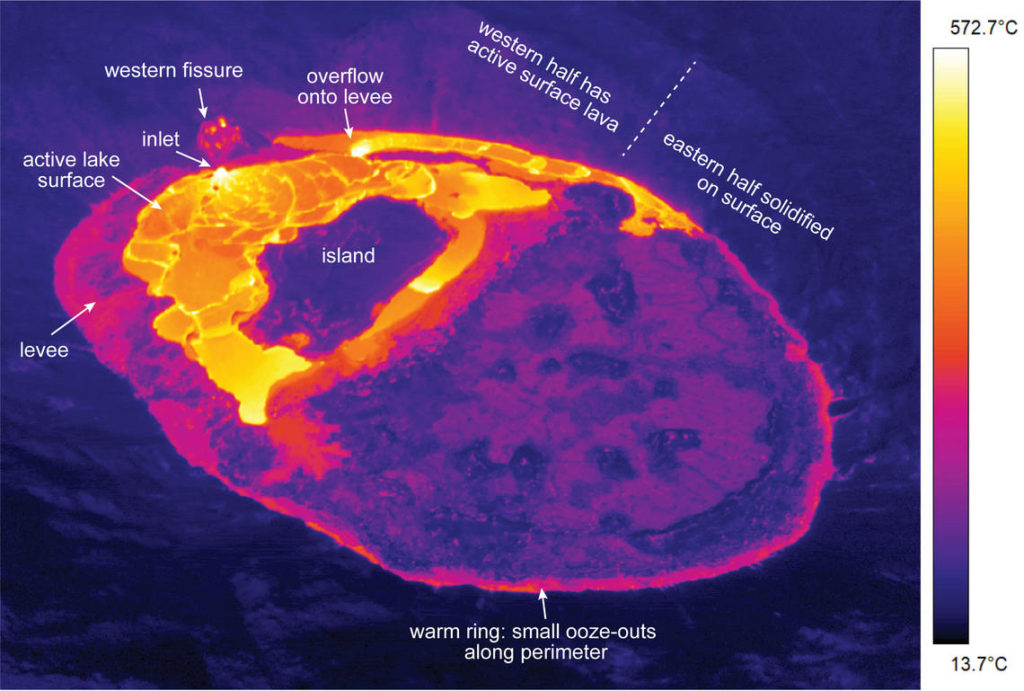 This thermal image taken during the February 1 helicopter overflight shows the features of the lava lake in Halema‘uma‘u, at the summit of Kīlauea. The eastern half of the lake is solidified at the surface, with active surface lava mostly limited to the western half. Nevertheless, small ooze-outs of lava occasionally appear along the eastern lake perimeter. The western lake is perched several meters above its base, impounded by a levee of solidified lava. Lava erupts at the western fissure and enters the lake at a small inlet site, where a narrow stream of lava pours in. During the overflight, a large overflow breached the northern levee and flowed along the northern lake margin towards the east. The temperature scale is in degrees Celsius.

As of the morning of February 2 lava has filled about 213 m (699 ft) of Halemaʻumaʻu in the active western portion of the lava lake. Eruptive activity continues at the western fissure, supplying lava to the lava lake via a sluggish lava stream at the inlet site along the west margin. Active surface lava remains largely confined to the western half of the lake, as before. The western fissure has a few incandescent openings in the vent region, but no open lava channel and no obvious sign of spattering. The western portion of the lake continues to have scattered foundering. The stagnant eastern area of the lake remains about 8 m (26 feet) lower than the perched, elevated, and active western portion. A series of surface cracks separates the active from the stagnant part of the lake. 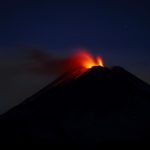 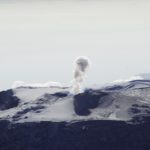