“Ash has been rising nearly continuously from the vent and drifting downwind to the southwest,” USGS Hawaiian Volcano Observatory wrote. “Ashfall and vog (volcanic air pollution) has been reported in Pahala, about 18 miles downwind. NWS radar and pilot reports indicate the top of the ash cloud is as high as 10,000 to 12,000 feet above sea level, but this may be expected to vary depending on the vigor of activity and wind conditions.”
The National Weather Service got involved, issuing an ashfall advisory for Kaʻū and saying “volcanic ash is expected to reach the region to the southwest of the Kilauea Volcano Summit (Halemaumau Crater), including cities of Wood Valley, Pahala, Punaluu, Naalehu, and Hawaiian Oceanview Estates.” 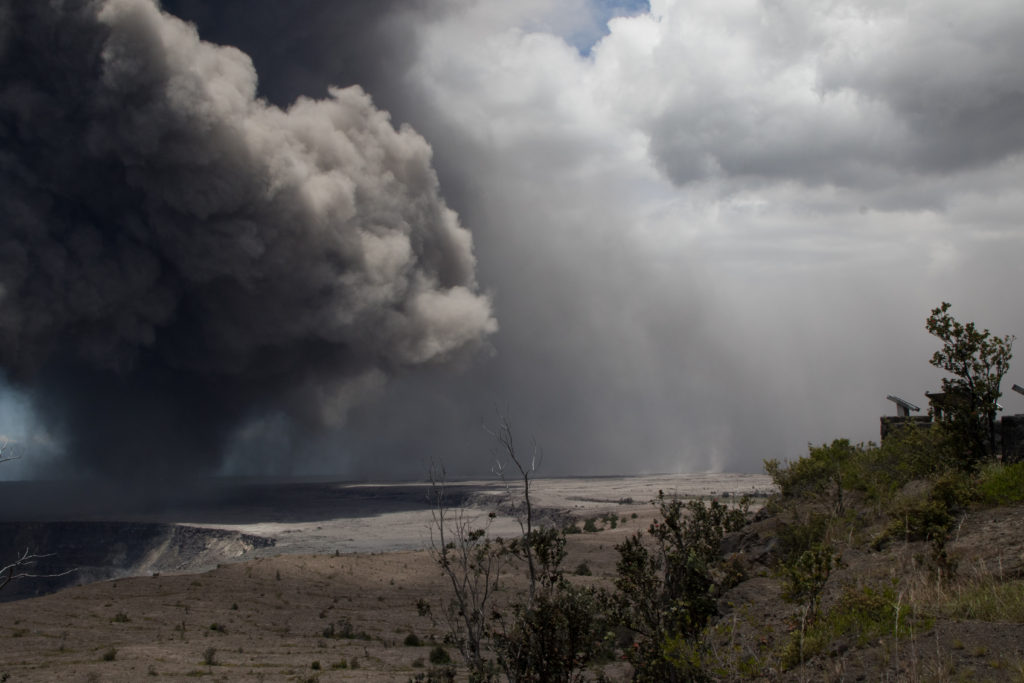 At 1:38 p.m. HST, ash falls from the plume southwest from Halema‘uma‘u crater onto the Kau desert. The northeast tradewinds were persistent today at the summit of Kīlauea Volcano, so ash was only blown Southwest.

Forecasters reported the ashfall may act as an “eye and respitory irritant, low level impacts for most people.”
The National Weather Service added:
Due to the sustained but low-level nature of ash production from Halemaumau Crater, ash accumulation up to one quarter of an inch is expected to be deposited in the advisory area. Persons with respiratory illnesses should remain indoors to avoid inhaling the ash particles and all persons outside should cover their mouth and nose with a mask or cloth.

Lava flows from fissure 17 have advanced little over the past day. Field crew estimates are an advance of only 100 yards.

Volcanic gas emissions remain elevated throughout the area downwind of the vents. An interruption in trade winds today means that other areas of Hawaii Island may experience varying levels of vog.
This eruption is still evolving and additional outbreaks of lava are possible. Ground deformation continues and seismicity remains elevated in the area.
Future outbreaks could occur both uprift (southwest) and downrift (northeast) of the existing fissures, or, existing fissures can be reactivated. Communities downslope of these fissures could be at risk from lava inundation. Activity can change rapidly.

Yesterday, ash emissions from the Overlook vent inside Halemaumau varied greatly in intensity with abrupt increases likely associated with large rockfalls deep into the vent. A number of these periods of increased ash emission sent plumes as high as 10,000 feet above sea level, with the cloud drifting downwind and dusting communities from Pahala to Discovery Harbor with ash. Yesterday’s ash clouds were visible from many vantage points in east Hawaii. Because of the increase in ash emission and higher altitudes of ash, HVO assigned an aviation color code RED to indicated significant ash emission that is a hazard to aircraft. We are remaining at RED this morning anticipating further ash events which may continue for the foreseeable future. Communities downwind should expect intermittent ashfall.

This morning dense ballistic blocks up to 60 cm (2 feet) across were found in the parking lot a few hundred yards from Halemaumau. These reflect the most energetic explosions yet observed and could reflect the onset of steam-driven explosive activity. Further observations are necessary to asses this interpretation. Additional such explosions are expected and could be more powerful.

Seismicity and deformation continue at the Kilauea summit. Deflation is ongoing. Several strongly felt earthquakes have occurred over the past day, likely caused by ongoing deflation of the summit area. These are expected to continue.

Strong earthquakes within the summit of Kīlauea Volcano continue in response to ongoing deflation and lava column drop. As of the afternoon of May 16, the floor of Kīlauea caldera has dropped approximately 3 feet (90 cm). This movement is stressing faults around the caldera of Kilauea, causing them to move and resulting in strong earthquakes of up to magnitude 4.4 thus far.

Employees at the Hawaiian Volcano Observatory, Hawai`i Volcanoes National Park and nearby residents are reporting frequent ground shaking and damage to roads and buildings. Hawaii County Police reports cracks across Highway 11 between mile markers 28 and 29. Although these are passable, motorists are urged to use caution.

As deflation continues, strong earthquakes in the area around Kilauea Volcano’s summit are expected to continue and may become more frequent. Areas further from these earthquakes may feel some ground motion as well, but much less severe.

The shallow depths of these earthquakes make them more damaging in the immediate vicinity of the epicenter, and individuals need to take precautions to minimize damage from the shaking, including the removal of unstable items from walls and shelves. Steep slopes should be avoided as they may become destabilized during strong earthquakes.

Ash emission from the Overlook crater within Halema`uma`u has generally decreased since yesterday. Although varying in intensity, at times the plume contains enough ash to be gray in color. The cloud is rising an estimated 3 to 4,000 feet above the ground, but altitudes are varying with pulses of emission. The ash cloud is drifting slowly northward from the Kilauea summit and ashfall may occur in Hawai`i Volcanoes National Park and Volcano Village. Communities downwind may receive ashfall and should take necessary precautions.

Several magnitude 3 or stronger earthquakes occurred beneath the summit today. The earthquakes were at shallow depth and resulted in cracks in Highway 11 near the entrance to Hawai`i Volcanoes National Park. Some facilities within the National Park were damaged as well. The explosive eruption of 1924 at the Kilauea summit was also marked by hundreds of felt earthquakes as magma drained from the caldera.

This afternoon, eruptive activity remained concentrated at fissure 17 but the spattering was decreasing in vigor. The advance of the flow has slowed significantly since yesterday afternoon; the flow remains nearly 2.5 km (1.5 mi) in length.

Volcanic gas emissions remain elevated throughout the area downwind of the fissures.

Magma continues to be supplied to the lower East Rift Zone as indicated by the continued northwest displacement of a GPS monitoring station. Elevated earthquake activity continues, but earthquake locations have not moved farther downrift in the past couple of days.

Heavy rains on the upper part of the volcanic area of the Fuego volcano generate a moderate lahar, with probabilities of becoming a strong lahar, in the Barranca Seca. Passing next to the OVFGO2 station, it was 20 meters wide and 2 meters high. This lahar takes strength when it reaches the confluence with the river Pantaleón, with a width of 25 to 30 meters, dragging trunks and branches of trees, as well as blocks of 1 to 2 meters in diameter, with vibrations in their way and smell of sulfur. This lahar is strong and can cause problems of overflow and flooding in the lower part, as well as erosion and damage the roads between Yepocapa and the communities of Morelia and Santa Sofia to leave them without communication.

For the above, INSIVUMEH recommends: A SE-CONRED: Take precautions, especially for vehicles and not to stay near rivers, as they may overflow. With the rainy season, these laharic events will continue to be generated mainly in the afternoons and evenings in the ravines around the Fuego volcano.

INGV reported typical activity at Stromboli from 7 to 13 May, with 2-4 hourly low-intensity explosions to heights of less than 80 m (300 ft) above the crater, in the North crater area. 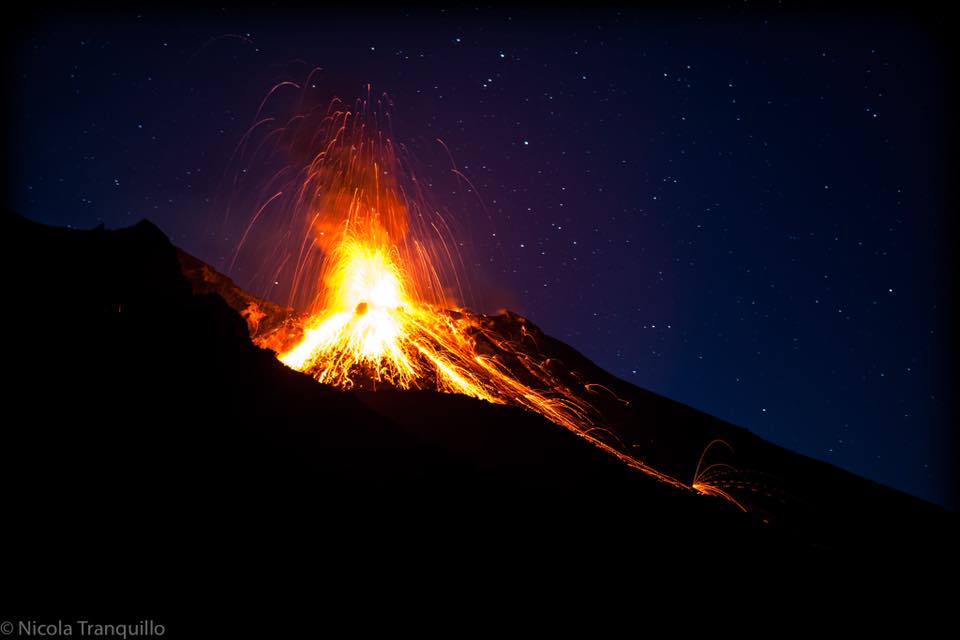 Fine ash as well as lapilli and bombs were ejected. The South Central crater area vents produced between 5-12 hourly, low-intensity explosions, also to heights of less than 80 m above the crater. Continuous degassing was also observed from these vents. On 13 May there was an increased frequency of explosions, with 16 events/hour. No significant variations were reported in seismological, deformation, or geochemical parameters.

The eruption started on April 27, 2018 at 23:50 local time continues. The intensity of the volcanic tremor (indicator of surface eruptive intensity) has remained relatively stable over the last 24 hours at values twice as high as those recorded last Week.

The flow activity is still predominantly in lava tunnels but the resurgences are more numerous these past two days, especially at the foot of the secondary cone. This secondary cone (the most upstream at the foot of the crater Rivals) is now the most active of the two with projections of 20-30m high reported in the last 24 hours. On the cone further downstream, only weak projections persist (photo). 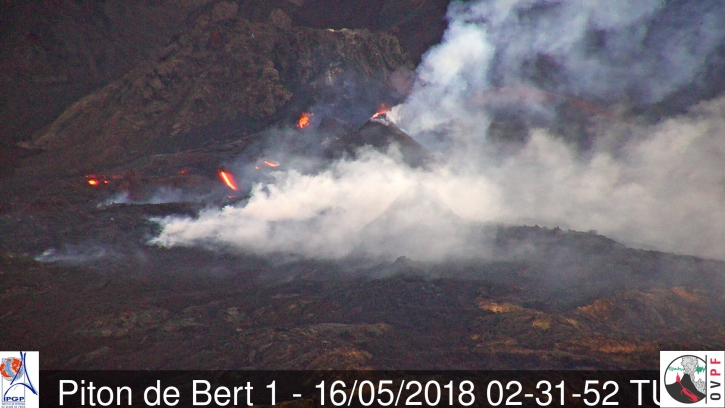 – The surface flows estimated from the satellite data, via the MIROVA platform (University of Turin), recorded during the last 24 hours were between 1 and 2 m3 / s. The CO2 concentrations in the air at the summit, and the CO2 concentrations in the soil in the Plains region and at the volcano deposit level remain high.
– The inflation (swelling) of the building continues.
– No volcano-tectonic earthquake has been recorded during the last 24 hours under the Piton de la Fournaise building.