A swarm of earthquakes has been detected in the vicinity of Mount Edgecumbe volcano, beginning at about 2 am AKDT on Monday, April 11, 2022. There have been hundreds of small quakes in the swarm, though the large majority are too small to locate. The National Earthquake Information Center reported that one of the largest earthquakes in the swarm occurred at 11:04 AKDT on April 11, with a magnitude of 2.8 at 10 km depth. The Alaska Earthquake Center reported another earthquake occurred at 3:44 pm AKDT on April 11, with a magnitude of 2.1 and depth of 4 km. As of this morning, the swarm continues, though the rate of earthquakes has declined over the past 24 hours. 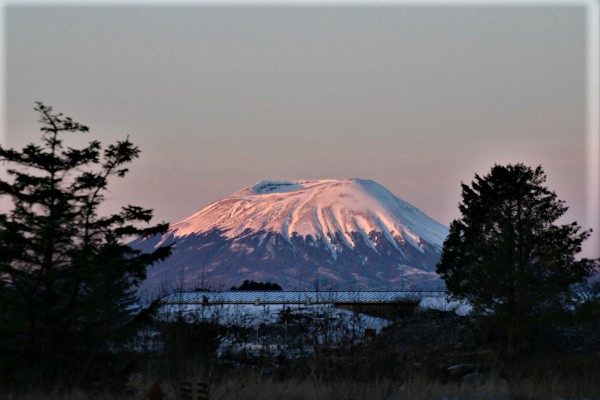 The cause of this earthquake swarm is currently unknown. This swarm may be associated with volcanic processes, regional tectonic activity, or a combination of sources. AVO does not have local seismic instruments in the area, and the closest station is in Sitka, 24 km (15 miles) to the east of the volcano.

Retrospective analysis of earthquake data in the area shows that a small number of earthquakes started occurring under Edgecumbe in 2020. This week’s activity is unusual in the number of events, however. 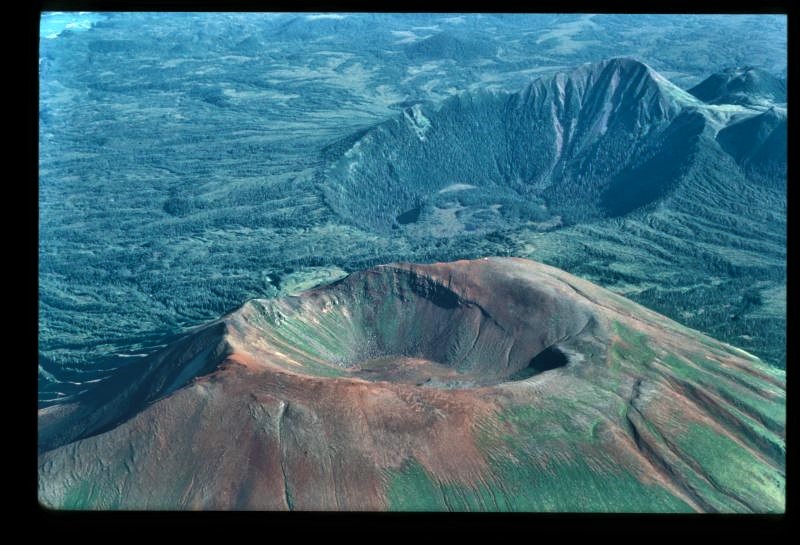 Edgecumbe 2002. View NNE of summit of Edgecumbe cone in foreground, crater of Crater Ridge domes in background. Dark reddish layers on Edgecumbe are dacitic pumice of early post-glacial pyroclastic episode; dark gray layers beneath, on left, are andesitic ash/pumice of the same episode, some of which originated at andesitic plug just visible at left side of crater. All rhyolitic ash/pumice of this pyroclastic episode originated at Crater Ridge crater, some of which came out as pyroclastic flows or lahars and ran into the sea both to the right (east) and left (west) of the crater.

Mount Edgecumbe is a 976 m (3202 ft) high stratovolcano on Kruzof Island located 24 km (15 mi) west of Sitka, Alaska, and is part of a broader volcanic field of lava domes and craters on southern Kruzof Island and surrounding submarine vicinity. Mount Edgecumbe and the surrounding volcanic field lies within the Tongass National Forest. There are no written observations of eruptions from the volcanic field; Tlingit oral history describes small eruptions from about 800 years ago. Geologic investigations show that eruptions 13,000 to 14,500 years ago produced at least one widespread regional tephra layer around 1 m thick near Sitka and over 30 m thick on parts of Kruzof Island. The youngest eruption preserved in the geologic record was about 4,500 years ago. The volcanic field has erupted a wide range of basalt to rhyolite compositions from numerous vents over the past 600,000 years.

SISMOLOGY
Five VT-type seismic events associated with rock fracturing (Volcano-Tectonics) were recorded. The most energetic earthquake presented a value of local magnitude (ML) equal to 1.8, located 1.0 km east-southeast of the volcanic edifice, at a depth of 3.6 km from the crater.
Four LP-type seismic events were recorded, associated with fluid dynamics within the volcanic system (Long Period type). The size of the largest earthquake assessed from the Reduced Displacement (DR) parameter was equal to 9.9 cm2.

FLUID GEOCHEMISTRY
Data on sulfur dioxide (SO2) emissions obtained by means of Differential Absorption Optical Spectroscopy (DOAS) equipment, corresponding to the Emu station, located 6 km to the East-South-East (ESE ) of the active crater, presented an average value of 434 ± 49 t / d, with a maximum daily value of 1164 t / d on March 11, recording a decrease in SO2 levels to levels considered low for the Láscar volcano, indicating from these parameters a change in the activity of the volcano, gradually returning to its basal state.
Eight anomalies have been reported in the emissions of sulfur dioxide (SO2) into the atmosphere in the area near the volcanic edifice, according to data published by the Tropospheric Monitoring Instrument (TROPOMI) and the Ozone Monitoring Instrument (OMI) Sulfur Dioxide Group (http://so2.gsfc.nasa.gov/). The maximum mass emitted, according to information reported by Mounts (http://mounts-project.com/home) was 80 tons, observed on March 5, associated with the degassing dynamics of the Láscar volcano. A decrease in the recurrence of these anomalies is observed, the last anomaly observed being on March 18.

SATELLITE THERMAL ANOMALIES
20 thermal alerts were recorded in the area associated with the volcanic edifice during the period, with a maximum Volcanic Radiative Power (VRP) of 6 MW on March 8, a value considered low according to data processed by MIROVA (http ://www.mirovaweb.it/), observing a decrease compared to the previous period. At the same time, according to the analytical processing of satellite images (Sentinel 2-L2A in combination of false color bands), radiance anomalies were observed during the days of 09, 14, 19, 24 and 29, with a radiance surface maximum of 4500 m2 on March 12.

GEODESY
From the data provided by 2 GNSS stations installed on the volcanic edifice, which make it possible to measure the deformation of the earth’s surface, vertical displacement rates of the order of 0.6 cm/month in the deflationary direction are estimated for one of the stations. In addition, a slight shortening of the monitoring line between the two stations is recorded. Therefore, slight signs of deformation are observed in the volcano which could be associated with deflationary activity.

SURVEILLANCE CAMERAS
Thanks to the analysis of the images from the fixed cameras, periods of degassing were observed, with columns composed mainly of gas and water vapour. The maximum height of the columns reached 800 m on March 4, 2022.
As for the incandescence, it was observed intermittently and with a very weak recurrence during the month (05, 12 and 21 March), localized in the center of active emission and of low intensity.
Activity remained at levels considered low, suggesting stability of the volcanic system. The volcanic technical alert is maintained at: GREEN TECHNICAL ALERT: Active volcano with stable behavior – There is no immediate risk
Note: A potential impact area within 1 km of the center of the active crater is suggested. 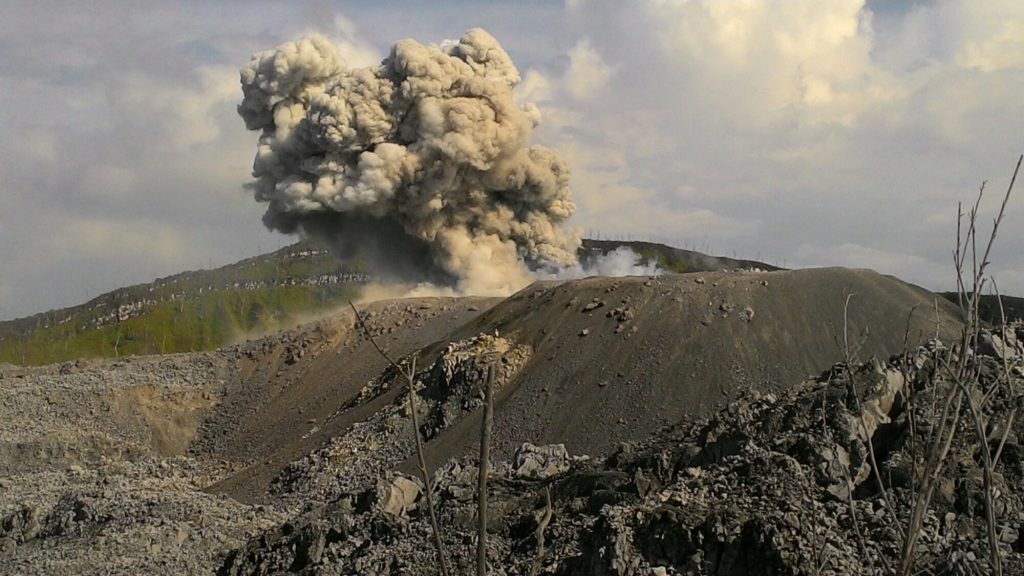 Satellite images of Heard Island’s Big Ben volcano showed thermal anomalies of varying intensity over Mawson Peak (the summit area) and on the NW flank during the previous month. Weather clouds prevented views of the volcano for 11 of the 14 acquisitions during 11 March-13 April. On 11 March a small thermal anomaly at the peak was visible along with a larger anomaly over a vent or multiple vents about 1 km W; the larger anomaly was elongated NE-SW, suggesting a lava flow. Multiple anomalies in the same areas were visible on 31 March and 13 April. 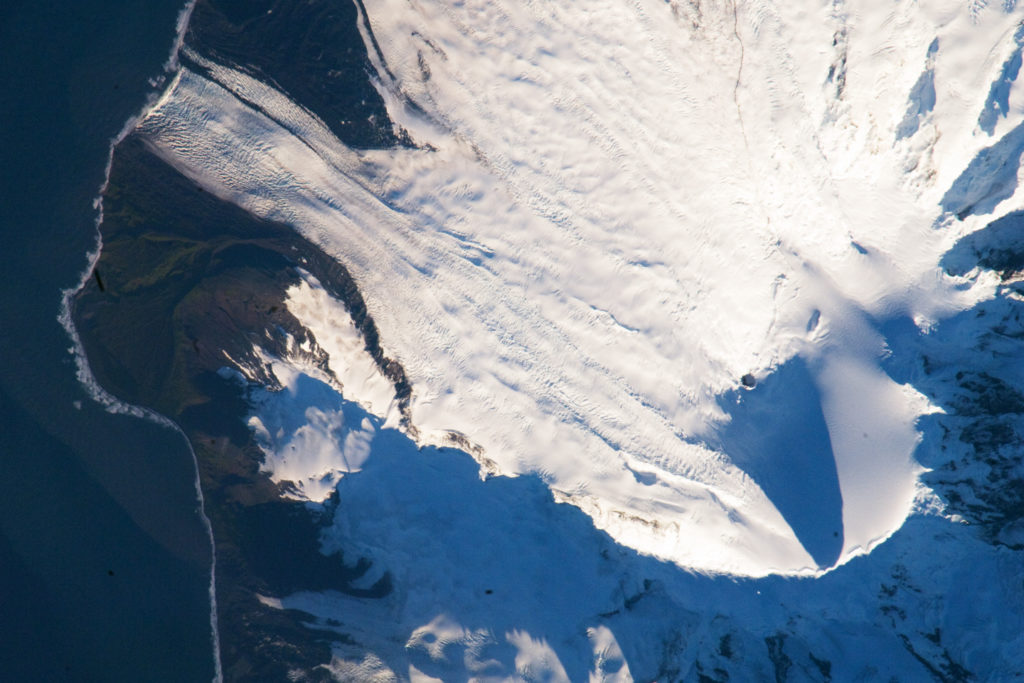 Heard Island on the Kerguelen Plateau in the southern Indian Ocean consists primarily of the emergent portion of two volcanic structures. The large glacier-covered composite basaltic-to-trachytic cone of Big Ben comprises most of the island, and the smaller Mt. Dixon lies at the NW tip of the island across a narrow isthmus. Little is known about the structure of Big Ben because of its extensive ice cover. The historically active Mawson Peak forms the island’s high point and lies within a 5-6 km wide caldera breached to the SW side of Big Ben. Small satellitic scoria cones are mostly located on the northern coast. Several subglacial eruptions have been reported at this isolated volcano, but observations are infrequent and additional activity may have occurred. 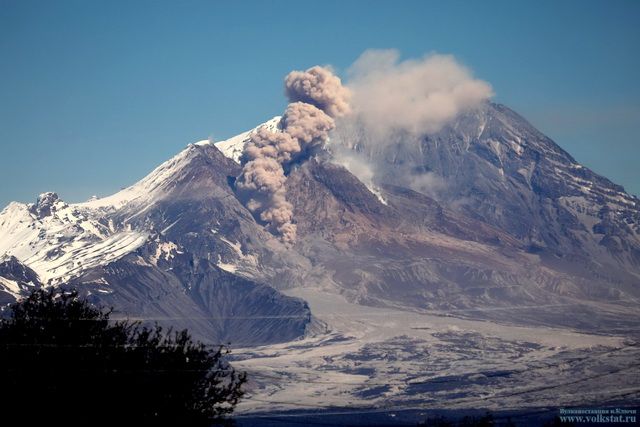 Volcanic Activity Summary:
A growth of the lava dome continues, a strong fumarolic activity, and an incandescence of the lava dome, and hot avalanches accompanies this process. Satellite data by KVERT showed explosions sent ash up to 6 km a.s.l., ash cloud moved to the southwest of the volcano.
The extrusive eruption of the volcano continues. Ash explosions up to 10-15 km (32,800-49,200 ft) a.s.l. could occur at any time. Ongoing activity could affect international and low-flying aircraft. 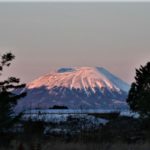 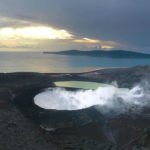