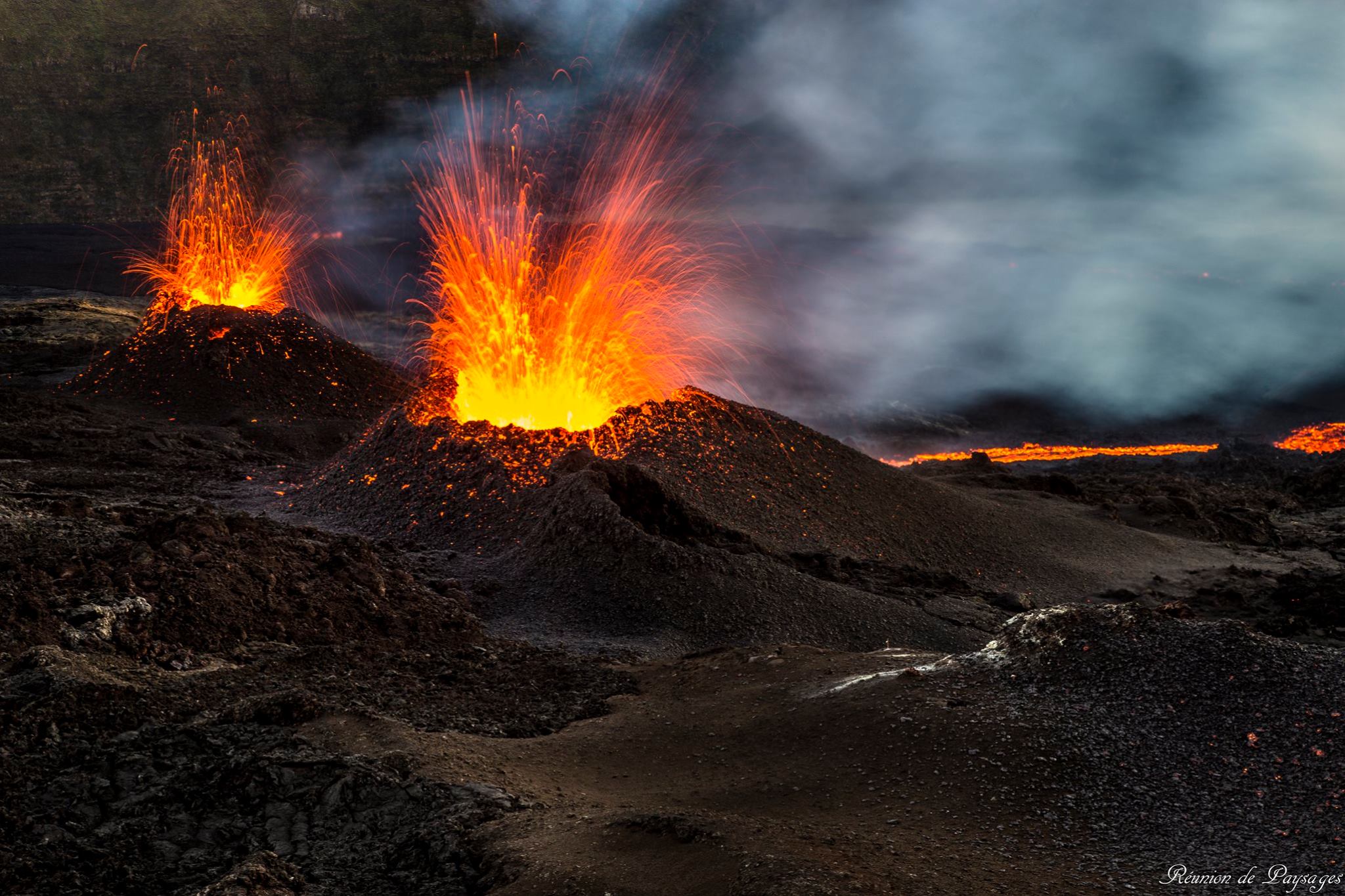 – Due to the bad weather conditions, no estimate of surface flows could be made today.
– A very slight deflation (deflation) of the volcano begins to be recorded on the OVPF deformation sensors. This means that the volume of magma coming out of the reservoir to feed the eruption is greater than the volume of magma that recharges it. This parameter will be followed in the next few days.
– No volcano-tectonic earthquake has been recorded in the last 24 hours under the Piton de la Fournaise building. 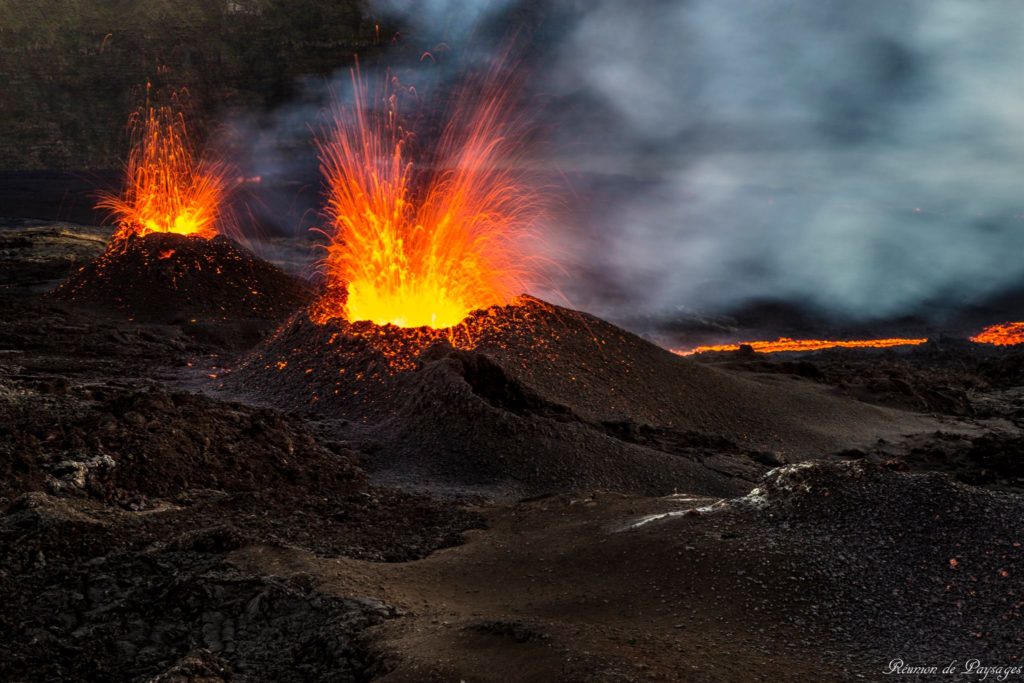 In April 2018, the OVPF recorded in total:
• 2362 superficial volcano-tectonic earthquakes (0 to 2 km deep) beneath the summit craters;
• 12 deep earthquakes (> 2 km deep);
• 414 collapses (in the crater Dolomieu and at the ramparts of Enclos Fouqué);
• 33 local earthquakes (under the island, Piton des Neiges side);
• 2 regional earthquakes (in the Indian Ocean zone).
The volcano-tectonic activity under the Piton de la Fournaise massif was particularly important in April because of the eruptive activity. Two eruptions marked this month, the eruption of April 3-4 (northern flank of the terminal cone) and that started on April 27 (southern flank of the terminal cone). These two eruptions were preceded by a seismic crisis during the final spread of magma to the surface (1021 earthquakes for the April 3 eruption and 1218 earthquakes for the April 27 eruption, Figure 1).

Figure 1: Histogram showing the number of superficial volcano-tectonic earthquakes recorded under the summit craters between 1 January and 1 May 2018. (© OVPF / IPGP)

The majority of these volcano-tectonic earthquakes were located beneath the summit craters. Other less numerous were located in the north – north – east sector of the Enclos Fouqué (in connection with the eruption of April 3-4, 2018).

Figure 2: Location of earthquakes detected in April. Only localizable earthquakes have been represented on the map. The observatory records seismic events not shown on this map because they are not localizable due to their low magnitude. The colored scale represents the time between April 1 and 30. (© OVPF / IPGP)

Deformation:
Side deformation, the month of April will also have been influenced by the two eruptions with rapid deformations of decimetric order during the final spread of the magma towards the surface (Figure 3).
Between the two eruptions, the volcano continued to swell (inflation), witnessing a pressure of the magma reservoir (recharge of this reservoir by deeper magma) at the origin of the eruption of April 27.

Figure 3: Illustration of the deformation over the last twelve months (the eruptions of July 14-August 28, 2017 April 3 and that started April 27 are shown in yellow here). Here is shown a baseline (distance between two GPS receivers) crossing the Dolomieu crater from north to south (in black the raw data, in blue the data smoothed over a week). A rise is synonymous with elongation and therefore swelling of the volcano; conversely, a decrease is synonymous with contraction and therefore deflation of the volcano. (© OVPF / IPGP)

Geochemistry of gases
CO2 concentration in the soil
In April, far-field CO2 concentrations (Plaine des Cafres (Figure 4), Plaine des Palmistes) showed increasing trends, while those recorded at the Volcano Lodge were on the decline. This geochemical evolution has also highlighted a continuation of the deep recharge and a possible transfer to lower depths (shallow reservoir) between the two eruptions of April.

Figure 4: Molar concentration of CO2 in the soil at the Plaine des Cafres station located at the observatory (the eruptions of April 3-4 and those started on April 27 are indicated by red bars). (© OVPF / IPGP) 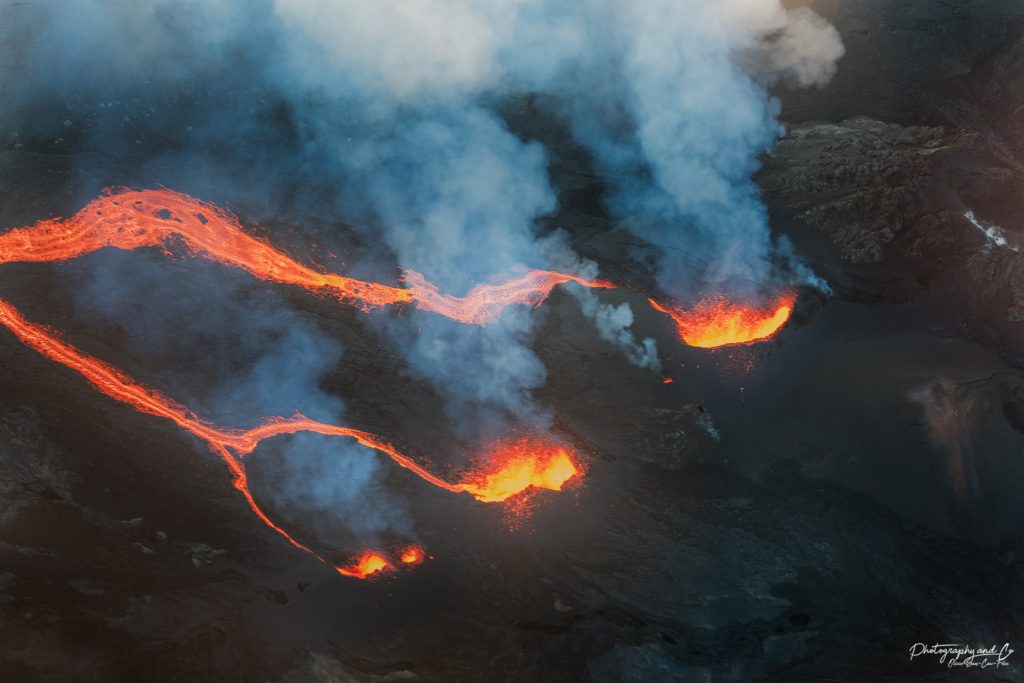 Composition of the summit fumaroles:
Increase in relative CO2 concentration, especially before the April 27 eruption; then decrease since the beginning of the April 27 eruption. The concentrations of SO2 and H2S have always remained quite low.
Concentration of SO2 in the air in the Enclos Fouqué:
An increase in SO2 emissions was observed during both April eruptions.
Since the onset of the April 27 eruption: a rapid trend of decreasing SO2 flux. These concentrations remain modest, similar or lower than those measured during the 2017 eruptions.
Bilan: The month of April was marked by two eruptions (see the bulletins « eruption » for more details) and by pre-eruptive signals of pressurization and magmatic recharges of the superficial reservoir (inflation of building, increased seismic activity and changes in CO2 content in the soil).

Elevated rates of seismicity and deformation at Kīlauea Volcano along a section of the lower East Rift Zone east of the Pu’u ‘Ō’ō vent are continuing this evening. This activity is associated with the continued intrusion of magma into the East Rift Zone to locations east of Highway 130. An outbreak of lava from the lower East Rift Zone remains a possible outcome of the continued unrest. At this time it is not possible to say with certainty if or where such an outbreak may occur, but the area downrift (east) of Pu’u ‘Ō’ō remains the most likely location.

Scientists of the Hawaiian Volcano Observatory will be on duty overnight to monitor the changing seismicity and deformation, and residents of the Puna District should remain alert and watch for further information about the status of the volcano; watch for Hawaii County Civil Defense messages at http://www.hawaiicounty.gov/active-alerts/.

Elevated earthquake activity in Kīlauea’s lower East Rift Zone has persisted through the day, with many reported felt events by residents. Earthquake counts have decreased slightly since midnight in the area east of Highway 130.

Beginning this morning a GPS station located about 1.5 km (1 mile) southwest of Nanawale Estates began moving toward the north, indicating the magma intrusion is approaching this area of the East Rift Zone. The station has moved several cm (inches) since this morning. 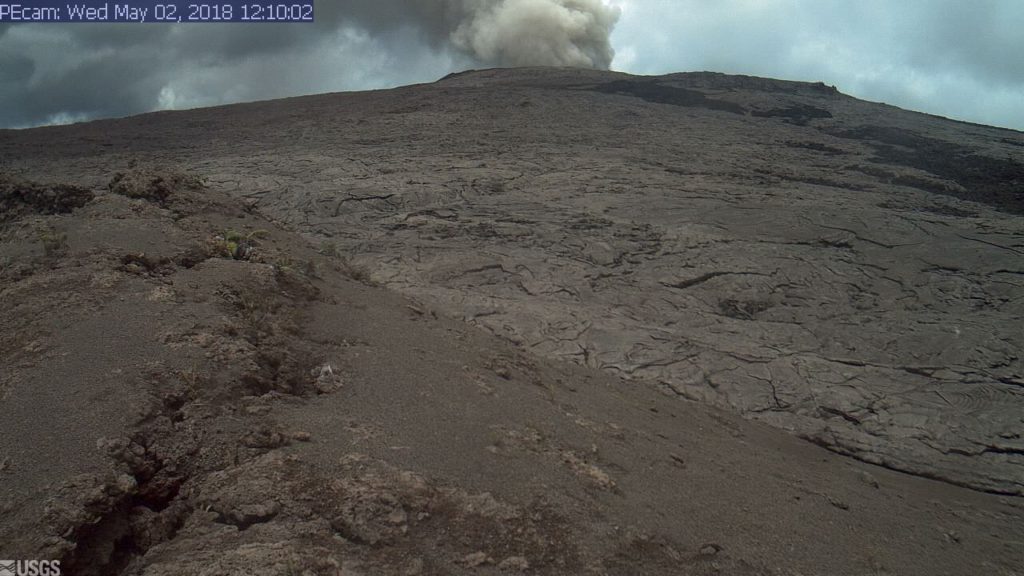 A tiltmeter at Pu’u ‘Ō’ō recorded steady, deflationary tilt during the day, with several sharp inflation offsets. These offsets probably recorded the continued episodic collapse of the crater floor. Some of these offsets corresponded to short-lived ashy plumes rising from the crater.
Tiltmeters at the summit began recording an increased deflationary tilt this afternoon. The summit lava lake level has lowered about 20 m (65 ft) since the deflationary tilt began in the early morning on May 1.

New small ground cracks less than a few cm (inches) wide developed today across a couple of roads in and adjacent to Leilani Estates; these cracks reflect the buildup of stress at the surface due to the magma intrusion. No steam or gases were observed escaping from the cracks.
Analysis of webcam images of the 61g lava flow field on May 1 indicates that surface flows within a few kilometers (miles) of Pu’u ‘Ō’ō have stopped advancing—the few areas of incandescence visible in the images did not move starting early morning on May 1. The 61g flow is likely no longer being supplied with lava from Pu’u ‘Ō’ō.

The migration of seismicity and deformation downrift (east) of Puʻu ʻŌʻō cone following Monday’s collapse indicates that a large area along the East Rift Zone is potentially at risk for a new outbreak.
The location of any future outbreak will determine what areas are in the path of new lava flows.

Level II Activity Level (WASPADA). The Marapi (2891 m above sea level) has an unstable eruption.
Since yesterday until this morning, the volcano, visually, can be observed clearly until it is covered with fog. The wind is blowing, weak to medium, towards the South-East and the South. On May 2, 2018 at 07:03 WIB 1 eruption was observed with a column of smoke rising 4000 m above the peak. Slight ashfalls occurred in Panyalaian District. Tanah Datar, the distance from the center of the eruption is 13 km. 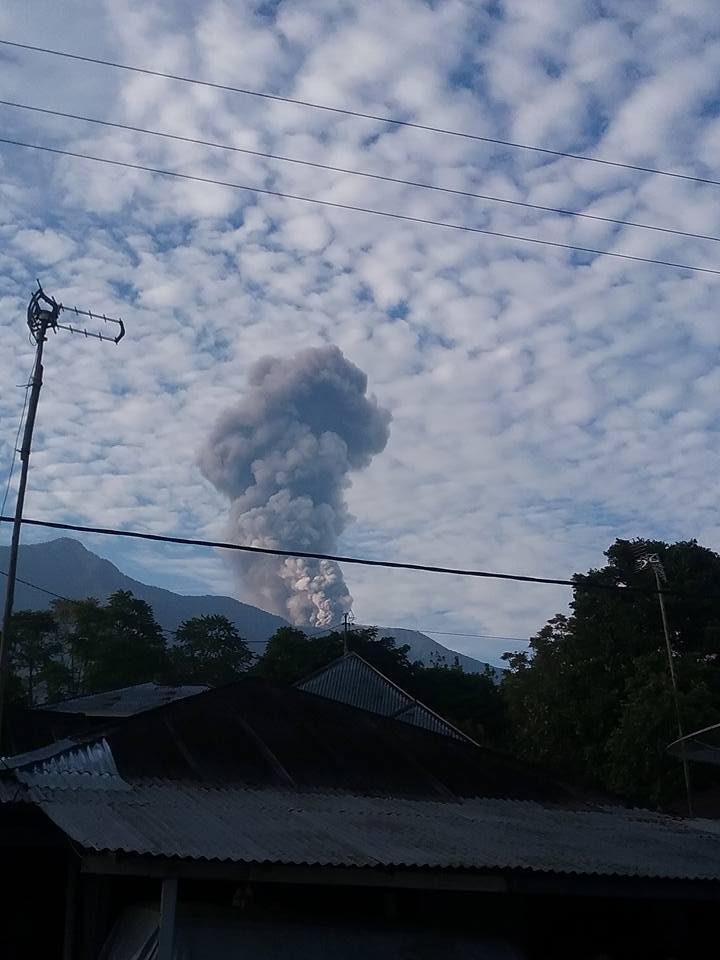 Recommendation: The community around the Gunungapi Marapi and visitors / tourists are not allowed to climb on the Marapi within a radius of 3 Km around the crater / summit.

VONA: A VONA code was last sent with an ORANGE color code, published on May 2, 2018 at 8:10 pm, relating to the eruption with ash column elevation at approximately 6891 m altitude or about 4000 m above the summit. The column of ashes leans towards the Southeast. 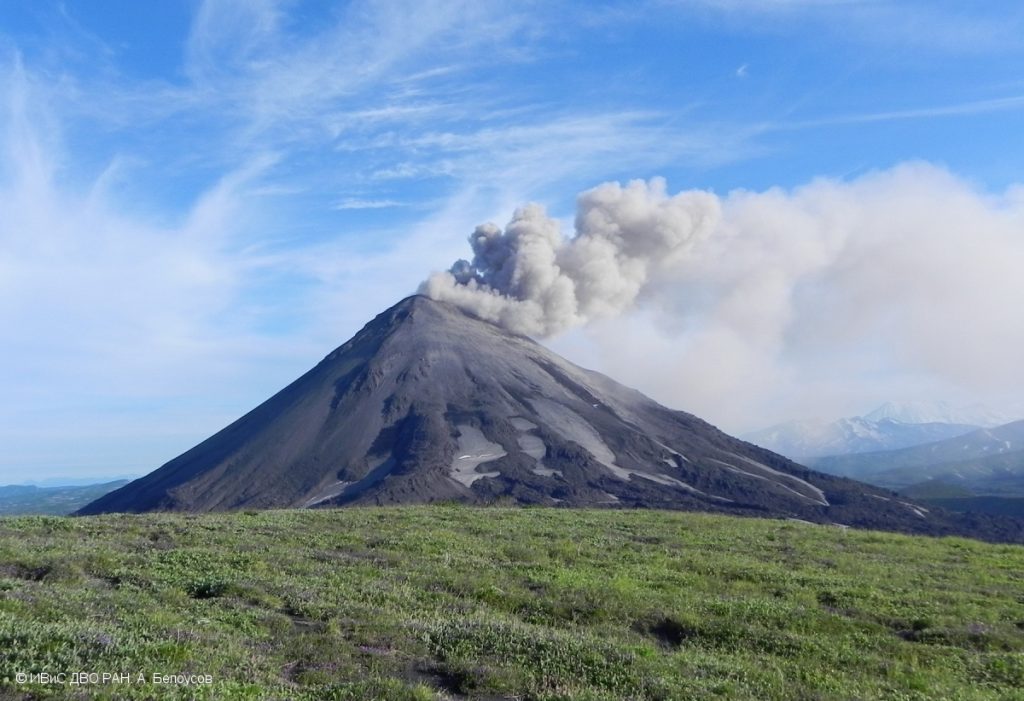 Volcanic Activity Summary:
According to satellite data, a moderate explosive activity of Karymsky volcano continues. An ash cloud continues to move to the south-east from the volcano. 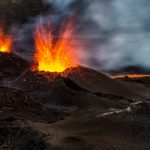 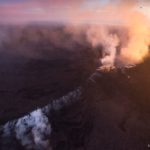