The Geophysical Institute of Peru (IGP) has reported to the National Center for Emergency Operations (COEN) a new emission of ash Sabancaya volcano (Arequipa) Friday morning. The ashes recorded a height of 2500 meters above the crater at 8:43 this Friday, March 16th.

The IGP reported that the ash dispersal has taken a direction to the northwest of the volcano and is expected to reach a radius of more than 30 kilometers. Given this, five villages have been alerted that will be affected, according to the agency’s forecasts.
According to the IGP report, the five villages that could be affected by the ash fall are: Huambo, Cabanaconde, Pinchollo, Maca and Tapay, in the Colca Valley.
The recommendations that were issued before the phenomenon are: protect your eyes with the use of lenses and masks. The authorities were also invited to carry out a permanent assessment of the impact of ashes on water, soil, air and the health of populations. 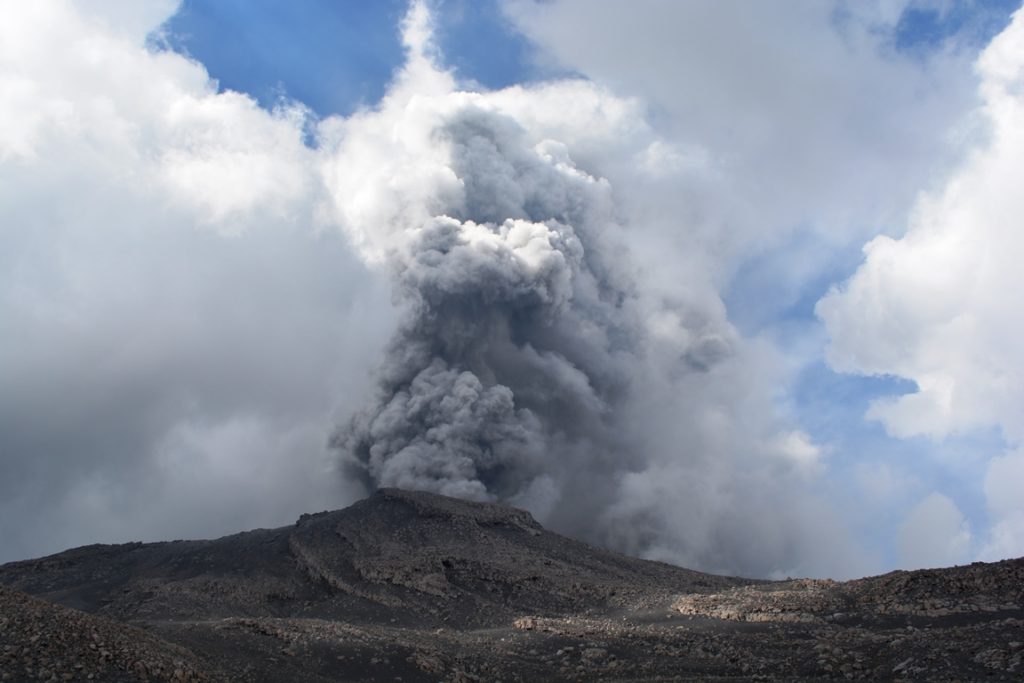 Explosive activity increased, averaging 17 explosions / day (value very close to that recorded in previous weeks). Events associated with Fluid Movement (Long Period Type) and Ash Emissions (Tremor) continue to dominate. The earthquakes associated with the rise of the magma (Hybrids type) continue to be low in number and energy. 
The eruptive columns of gas and ash reached a maximum height of 3000 m above the crater. The dispersion of these materials occurred within a radius of approximately 30 km, mainly in the northwest, southwest and south. 
The tracking of the deformation shows a positive change. 
The volcanic gas flow (SO2) recorded on March 14 has a maximum value of 3110 tons / day, a value considered large. 
Two thermal anomalies were recorded according to the MIROVA system, with values ​​of 8 and 42 MW VRP (Radiated Volcano Power).

GeoNet monitoring teams visited White Island last week and found it quiet. Over the weekend a small earthquake swarm has occurred nearby. No changes in activity are apparent after the swarm.
Observations during a visit to White Island on Wednesday last week confirm that the volcano remains quiet. The monitoring team undertook a ground deformation survey, measured fumarole and vent temperatures, sampled springs and the Crater Lake. These activities are part of the routine monitoring undertaken at White Island every 3 months. These visits complement the seismic, acoustic, GNSS, web camera and gas data that are collected continuously.
The most significant change is the reappearance of a Crater Lake on the floor of the Active Crater area. This appears to be a response to the rainfall from the recent cyclones. The lake temperature is relatively cool at 27 ºC, and we were also able to sample the lake. The lake was last sampled in August 2017. 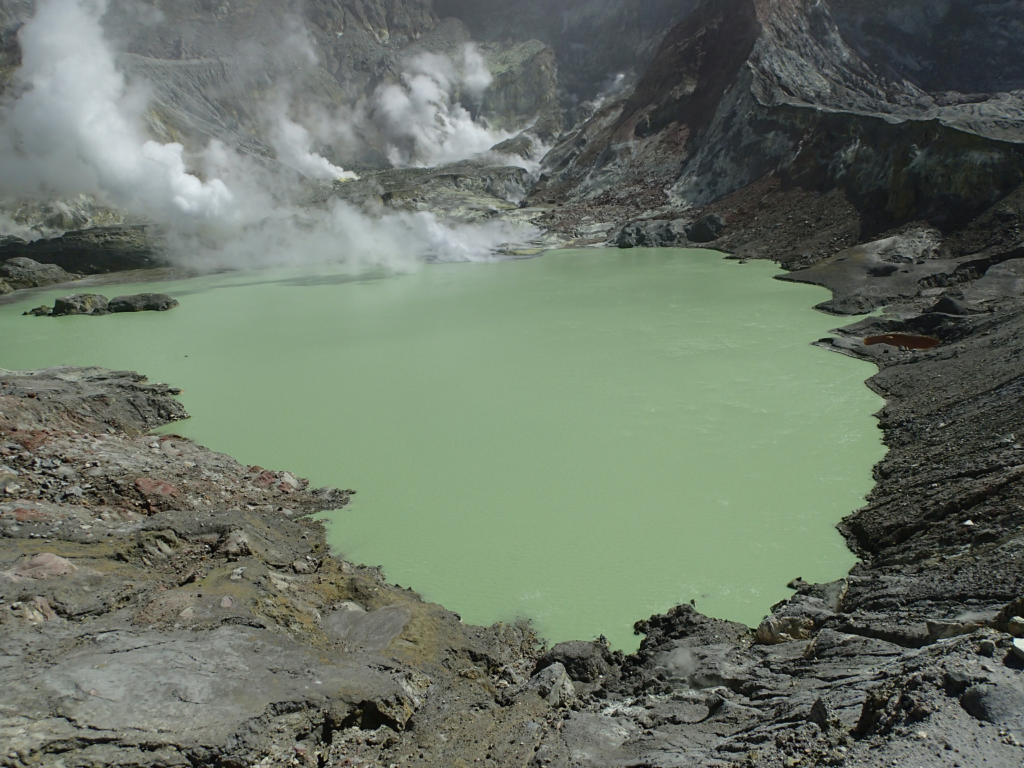 Temperatures of both the Dome vent in the active crater and Fumarole 0 on the Main Crater floor continue to decline. The Dome vent is now 128 ºC, down from 157 ºC in December 2017. While Fumarole 0 is down from 144 to 138 ºC. Spring and stream flows have also declined, which is consistent with the lower water level in the Crater Lake or following periods with no lake present. The ground deformation survey also shows subsidence towards the Active Crater of 2-5 mm per month.
The seismic activity has been low in recent months, however there was a sequence of small earthquakes near the island over the weekend. The largest earthquake was M3.3 at 11:37am on Saturday 17 March. We have not detected any changes at the island related to these earthquakes. 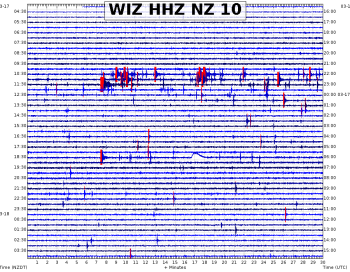 The seismic record on Saturday March 17 at White Island

White Island is always capable of a new eruption at any time, often without any useful warning. We continue to monitor the volcano for possible renewed activity. The Volcanic Alert Level remains at Level 1. The Aviation Colour code remains Green.

In the last 24 hours, through the monitoring systems of the Popocatépetl volcano, 92 low intensity exhalations were identified, accompanied by water vapor, gas and sometimes by light amounts of ash that dispersed in the northeast direction . Additionally, yesterday two volcanotectonic earthquakes were recorded at 7:48 pm and 9:42 pm, respectively.

During the night incandescence was observed in the area of the crater that increased by some exhalations  .

At the time of this report there is no visibility of the crater, however early in the morning it was possible to observe the slight emission of volcanic gases that disperse in east-southeast direction .

CENAPRED asked not to approach the volcano and in particular the crater, because of the risk of falling of projectiles, and in case of heavy rain to stay away from the bottoms of the throats because of the danger of landslides and flows of mud.
The volcanic warning light of the Popocatepetl volcano is located at Amarillo Phase 2. 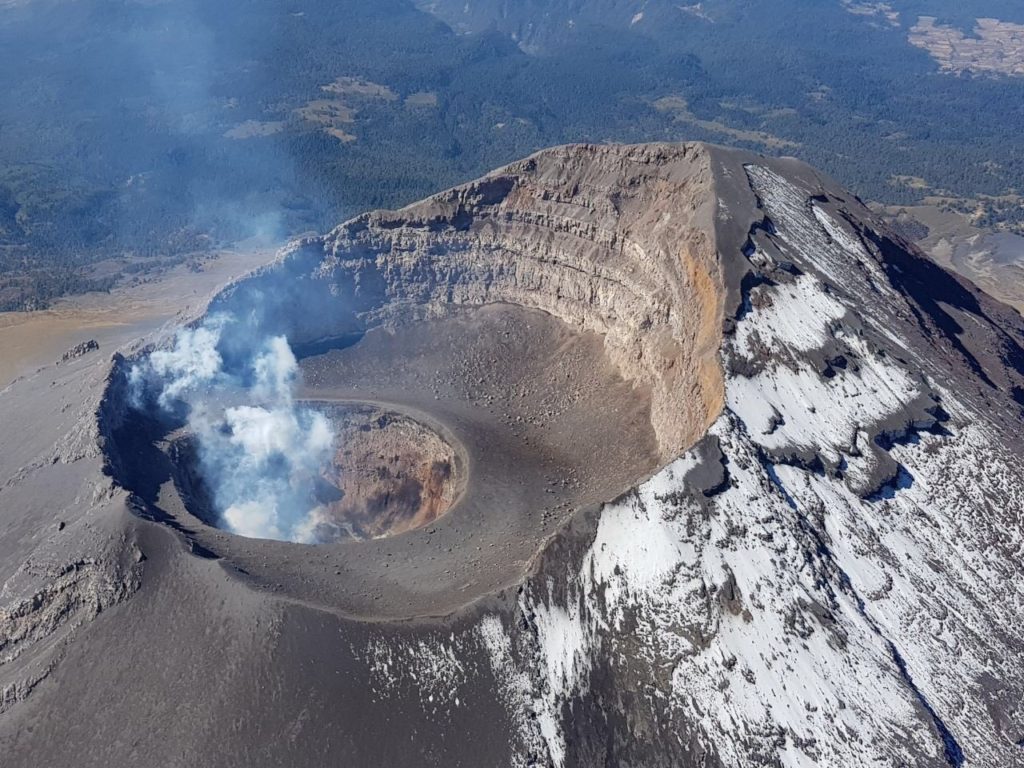 Update of March 16, 12:50 (March 16, 1850 GMT)
Today, with the support of the federal police, a reconnaissance flight of the Popocatépetl volcano was carried out. During this one, it could be corroborated that the internal crater keeps its dimensions of 320 m of diameter and about 100 m of depth. In its bottom, it was possible to observe a small dome (No. 78) 50 m in diameter and about 30 m thick. On the walls of the internal crater, remains of earlier domes could be seen. During the overflight, gas emissions could be observed on the surface of this new dome. It is likely that in the next few days / weeks, this dome will increase in size and will eventually be destroyed by moderate explosions.
The Popocatepetl volcanic warning light remains in phase 2 yellow.

LOPEVI VOLCANO ALERT BULLETIN No2 issued by the Vanuatu Meteorology and Geohazards Department (VMGD) on 19th March 2018 at 13:22PM:
The volcanic unrest continues at Lopevi; The Alert Level remains at Level 2.

The current volcanic unrest at Lopevi is continuing in a steady state and the Volcanic Alert Level remains at Level 2. The volcanic unrest is likely to continue and there is a chance some eruptions may follow. Danger is restricted to visitors on the island. 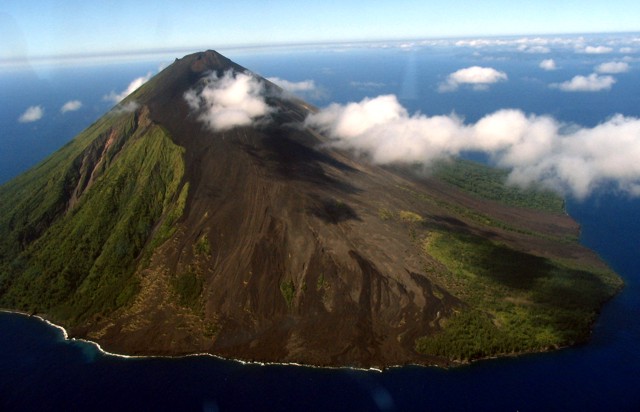 The small 7-km-wide conical island of Lopevi (Vanei Vollohulu) continues to show signs of volcanic unrest. Observation photos from February to March 2018 show that the activity at the volcano is continue to occur in the active craters at the summit crater. Observations photos and satellite images confirm the activity consists of ongoing gas and steam cloud. No eruptions are currently occurring.
In the past volcanic unrest at Lopevi has led to small or short-lived eruptions. There is a chance some eruptions may follow the actual unrest.
The Lopevi Alert Level (VAL) remains at Level 2 since 23 September 2017. The current observations are consistent with the Alert Level 2 activity. Level 2 indicates ‘Major Unrest; Danger is around the Lopevi island’. 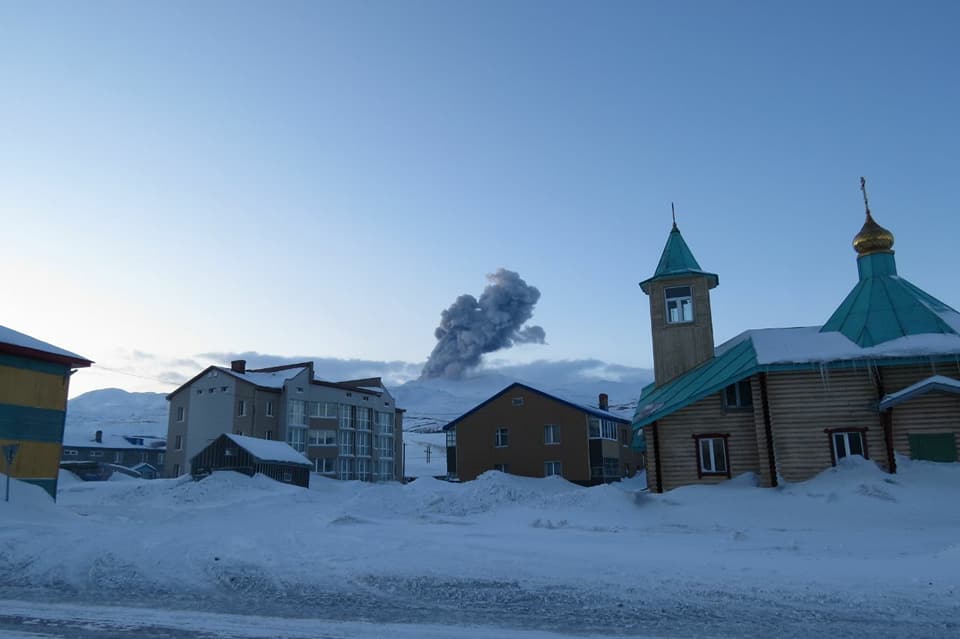 Volcanic Activity Summary:
According to visual data by volcanologists from Severo-Kurilsk, explosions sent ash up to 2.0 km a.s.l.; ash plume is drifting to the north-northeast from the volcano.
A moderate gas-steam with some amount of ash activity of the volcano continues. Ash explosions up to 16,400 ft (5 km) a.s.l. could occur at any time. Ongoing activity could affect low-flying aircraft and airport of Severo-Kurilsk. 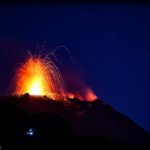