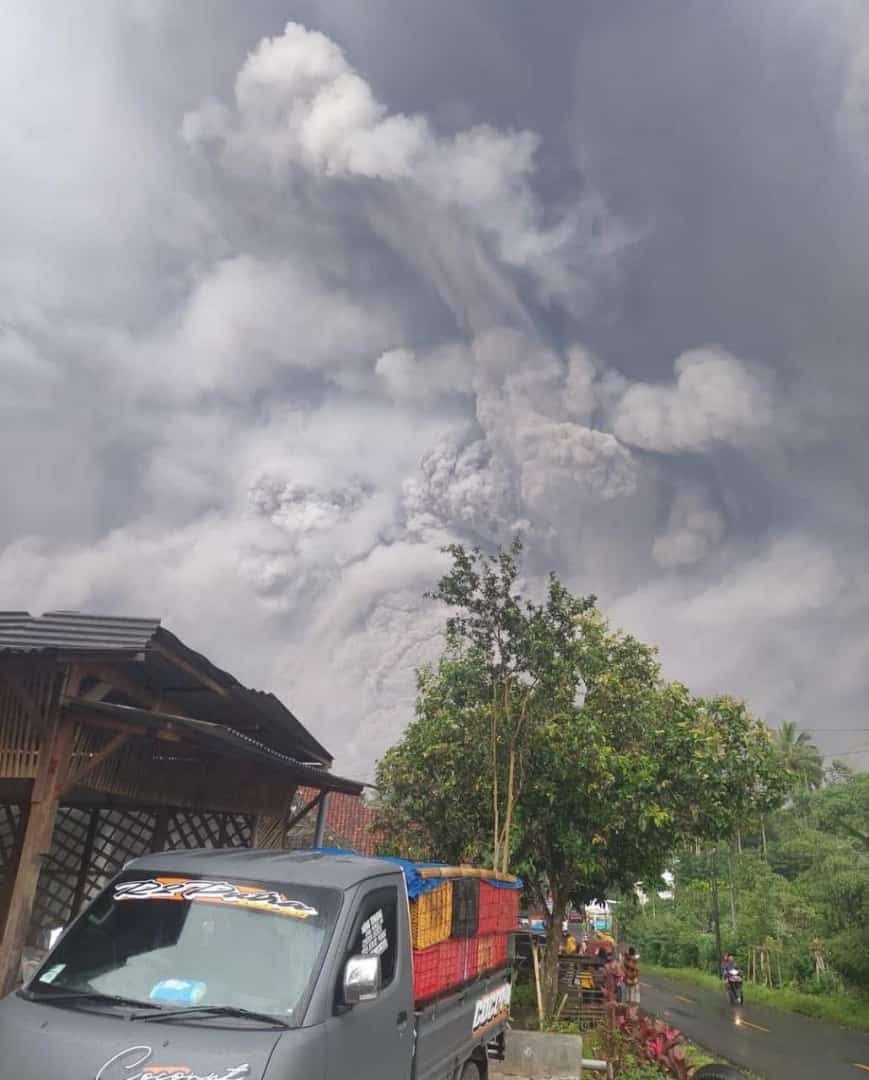 At around 11:00 a.m. on 12/04, VAAC Darwin issued a VONA message this morning regarding volcanic ash emissions from the Semeru volcano in Indonesia. An ash cloud rose to an altitude of 15,200 m. Further information is still awaited from the PVMBG.
Videos on social networks show people fleeing a pyroclastic flow that has almost reached the villages south of the volcano. It is not yet known whether there are any casualties. 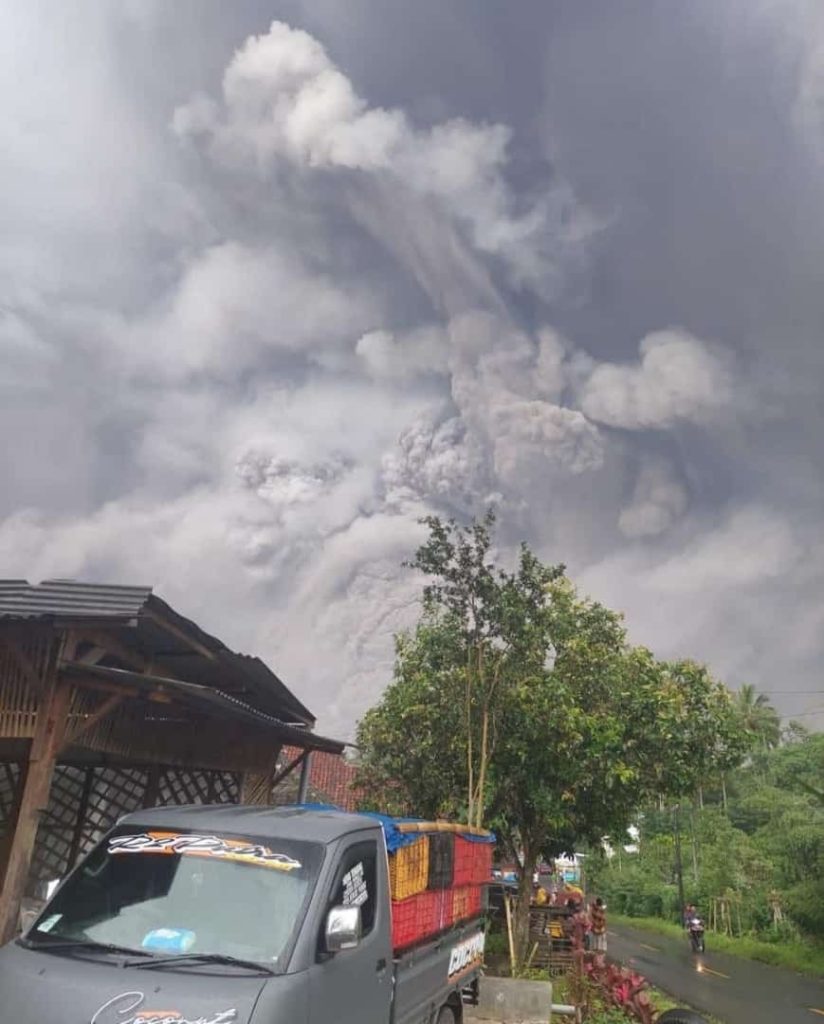 Indonesia’s Semeru volcano in east Java erupted at 3:00 a.m. local time on Saturday, blanketing its surroundings in a thick layer of smoke and ash and prompting thousands to flee their homes. No casualties have yet been identified, according to the national agency for natural disasters. However, the emergency services had to evacuate residents as pyroclastic flows reached their villages and destroyed a bridge in the Lumajang region.

1. Visual: From November 1 to 30, 2021, the volcano is clearly visible until it is covered with fog. The gas bursts observed from the main crater are white and gray with moderate to high thickness about 100-600 meters from the summit. Eruptions still occur continuously, producing gray eruption columns with a maximum height of 300 to 600 m above the top of the crater.

On December 1, 2021, there was an avalanche of hot clouds with a sliding distance of 1700 m from the summit, or 700 m from the front of the lava flow, with a southeast direction. After the hot cloud avalanche appeared, a lava avalanche occurred with a distance and sliding direction that were not observed. On December 4, 2021 from 1:30 p.m. WIB flood vibrations were recorded, then at 2:50 p.m. WIB hot clouds were observed to descend with a sliding distance of 4 km from the summit or 2 km from the end of the flow. lava to the southeast (Besuk Kobokan), but so far the distribution and distance of the avalanches cannot be determined. 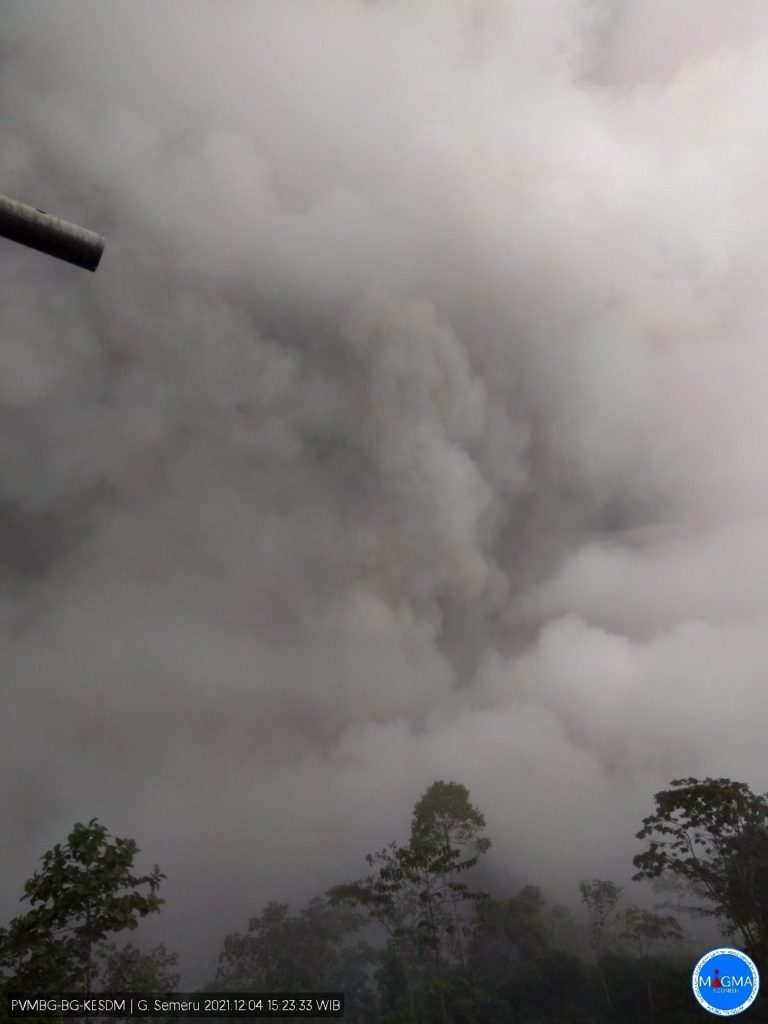 Analysis: Visual observations showed that the occurrence of lava avalanches and hot cloud avalanches was caused by the instability of the lava tongue deposits. The activity that occurs on December 1 and 4 is surface activity (secondary eruption). Seismicity does not indicate an increase in the number and type of earthquakes associated with bringing fresh magma / rock to the surface.

National Disaster Mitigation Agency spokesperson Abdul Muhari said at least 13 villagers died from severe burns and 57 were hospitalized, 16 of them critically with burns. He added that rescuers were still looking for seven residents and sand miners along a river in the village of Curah Kobokan who were reported missing.

The National Institute of Geophysics and Volcanology, Osservatorio Etneo reports that sporadic and diluted ash emissions from the Southeast Crater are observed. Due to cloud cover, observations are made discontinuously. The phenomenon was detected both by surveillance cameras and by INGV-OE staff.
From the seismic point of view, the tremor increases slightly on the average values. The infrasound activity is at low levels and does not show significant changes.
GNSS and inclinometric monitoring networks for soil deformation do not show significant variations. 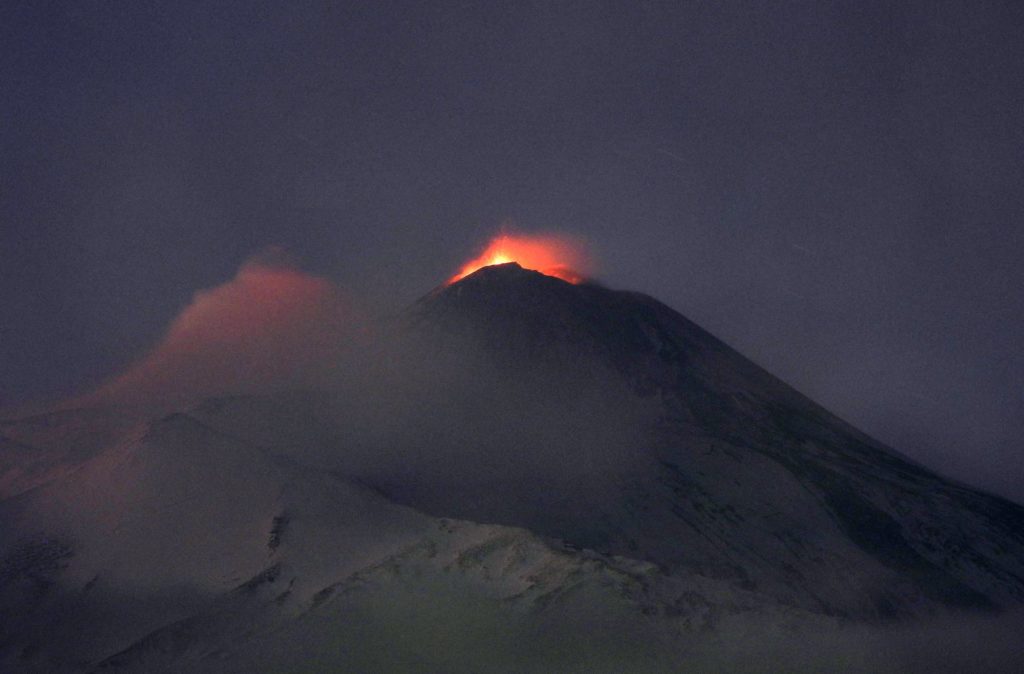 The National Institute of Geophysics and Volcanology, Osservatorio Etneo, reports that Strombolian activity is observed in the Southeast Crater from 4:10 p.m. GMT.
From the seismic point of view, the gradual increase in the amplitude of the tremor continues. An increase in infrasound activity is also observed from 3 p.m.

Since the last declaration, a total of 37 earthquakes have been located in the area affected by the volcanic reactivation on the island of La Palma, including 1 felt by the population.
Seismicity continues below the central area of Cumbre Vieja in the same areas of the previous days, 31 of these earthquakes are located at depths of 9-18 km and only 6 at depths of around 20 km.
The maximum recorded magnitude is 3.4 (mbLg) corresponding to today’s earthquake at 1:23 UTC, with a depth of 26 km.
The amplitude of the tremor signal is maintained at low levels. 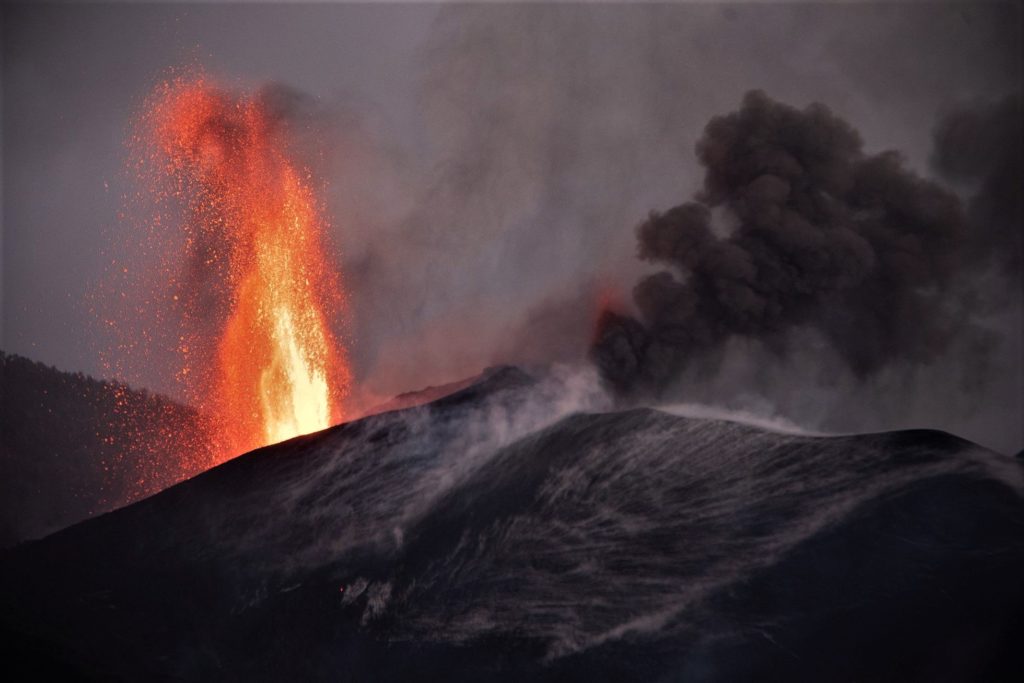 The island’s network of permanent GNSS stations shows an elevation reversal recorded on December 2 at station LP03, which is closest to the eruptive centers.
In the rest of the stations, the slight deflation possibly linked to the deep seismicity has stabilized, except in LP01 which continues to record it.
In view of the image calibrated at 08:45 UTC, a degassing cloud height of 1,500 m is estimated.

The height of the cone is measured by obtaining a value of 1,124 m at sea level . 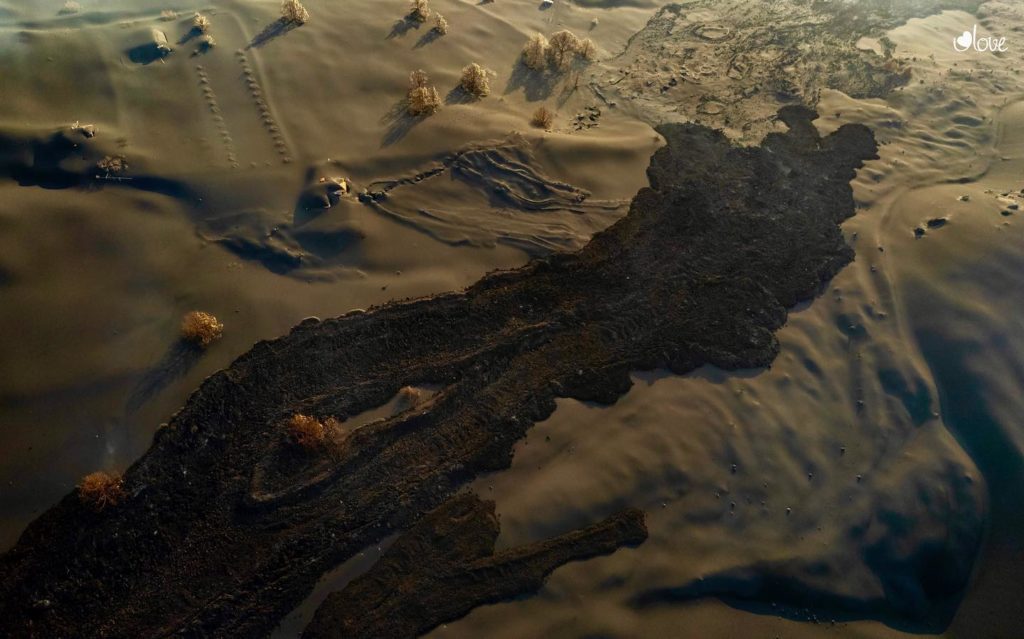 The National Geographical Institute (IGN) has recorded since last midnight 14 small earthquakes in La Palma, the largest of magnitude 3.4, located in the municipality of Fuencaliente at 1:23 and at a depth of 26 kilometers. The latest report from the National Security Directorate (DSN) indicates that there has been a decrease in intermediate and deep seismicity over the past day. In addition, a new lava flow emerged from one of the old emitting foci on Friday afternoon and is heading southwest towards the Las Manchas region, according to spokespersons for the Emergency Plan for the volcanic risk (Pevolca). The new lava tongue occupies areas already occupied by previous flows.

– The weather around Mount Merapi is generally sunny in the morning and evening, while it is foggy in the afternoon.
– On December 1, 2021, there were 2 hot cloud avalanches towards the southwest with a maximum slide distance estimated at 3,000 m. Light ash rains were reported in the East-South-East area of Mount Merapi, namely Mriyan, Sangup Tamansari Boyolali and Gedongijo Klaten.
– Lava avalanches were observed 170 times towards the southwest with a maximum sliding distance of 2000 m.

– The intensity of the seismicity this week is higher than last week.

The deformation of Mount Merapi, which was monitored using EDM this week, showed a distance shortening rate of 0.7 cm / day.
– There is a rainfall intensity of 83 mm / hour for 225 minutes at Kaliurang station on November 30, 2021. An increase in flow and lahars was reported in the Woro, Gendol, Kuning, Boyong and Bebeng rivers on December 1 2021.

Conclusion:
– The volcanic activity of Mount Merapi is still quite high in the form of effusive eruption activity. The status of the activity is defined in the “SIAGA” level.
– The current potential danger consists of lava avalanches and hot clouds in the South-East-South-West sector over a maximum of 3 km to the Woro river and 5 km to the Gendol and Kuning rivers , Boyong, Bedog, Krasak, Bebeng and Putih. During this time, the ejection of volcanic material in the event of an explosive eruption can reach a radius of 3 km from the summit.

The observatory of the Santiaguito volcano OVSAN reports a white degassing at the level of the crater which disperses in a southwest direction. Weak and moderate explosions were recorded which expel white and gray columns at a height of 3,400 meters above sea level (11,155 feet) which are scattered in the southwest and west direction. Strong avalanches of boulders and ash continue to be generated on the flanks: West, South-West and South mainly and others weak to moderate in the direction North-West, North-East and South-East, some reaching the base of the Dome Caliente. 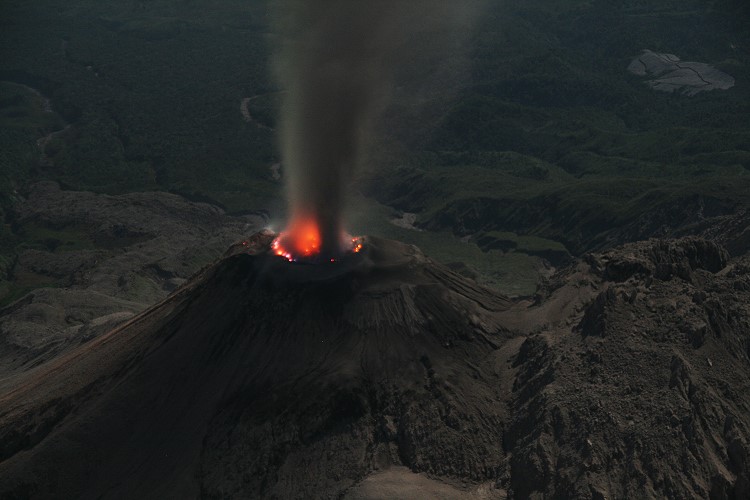 Some explosions and avalanches leave fine ash suspended in the volcanic perimeter. A slight degassing noise similar to that of an airplane turbine can be heard due to the pressure of the magmatic gases. Due to the extrusion of block lava in the dome of the Caliente Dome in a West-South-West direction and unstable materials in the crater, there is a probability of moderate to heavy pyroclastic flows, so do not stay at near or within the canals. rivers near the slopes of the volcano. 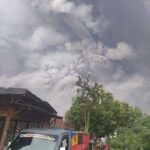 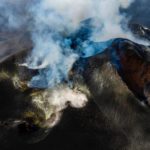