Since the last declaration, 26 earthquakes have been located in the southern part of the island of La Palma, near the ongoing volcanic eruption. This value is considerably lower than in previous days. Two of the earthquakes were felt by the population, one of them with a maximum intensity IV at 10:45 UTC yesterday with a hypocenter 13 km deep and a magnitude of 3.5 mbLg and another at 08:28 UTC today hui with a hypocenter 38 km deep and a magnitude 4.3 mbLg.
The volcanic tremor signal has seen a small rise over the past 12 hours but continues at low values compared to values observed throughout the eruption. 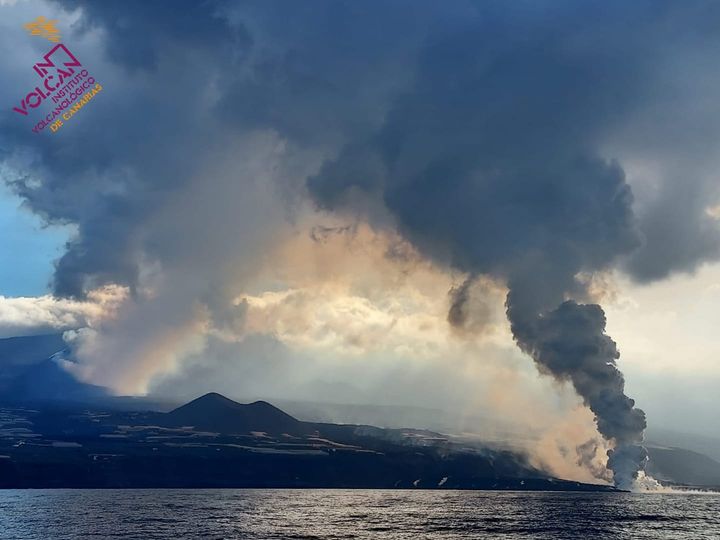 The island’s network of permanent GNSS stations shows that after reversing the inflation on days 4 and 5 at station LP03, which is closest to the eruptive centers, it remains at a lower level than previously established. On the other hand, the station continues to record deformations towards the South. In the rest of the stations, the slight deflation possibly linked to the deep seismicity has moderated.
Based on the calibrated image, a column height of 2,900 m is estimated at 08:45 UTC.

Seismicity and sulfur dioxide emissions from the volcano continue their downward trend, after the rebound recorded two days ago.
The deformation closest to the eruptive center registers a vertical decrease which slows down in recent hours.
The lava overflow from the volcanic cone recorded on Thursday began to feed the flows that flow to the coast. This is positive because most of the energy finds its natural outlet to the sea. 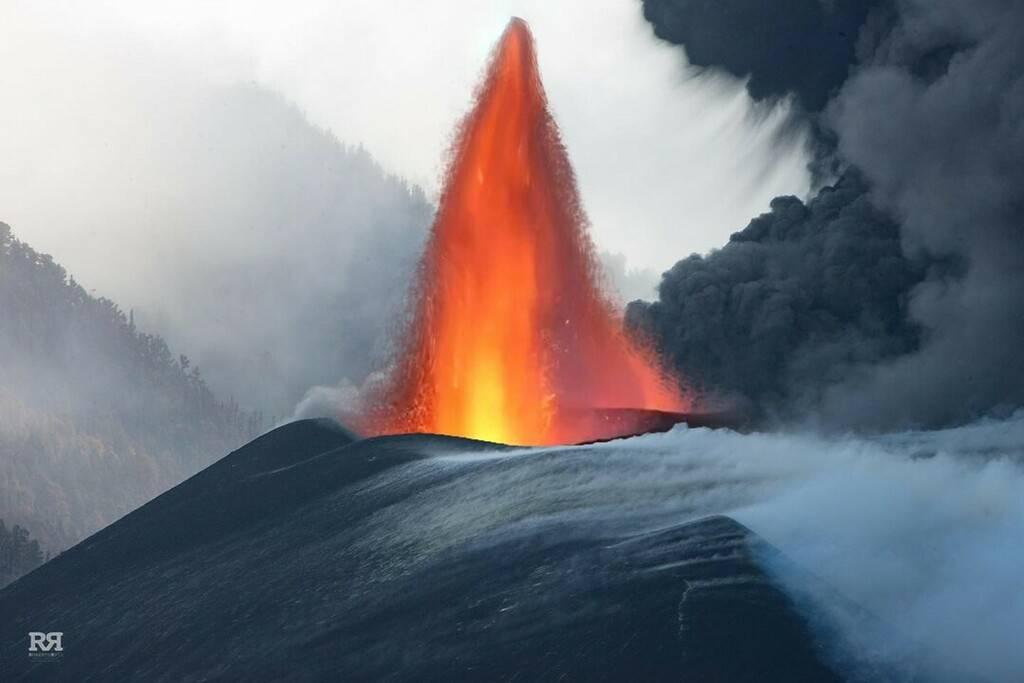 La Palma woke up on Saturday with a new magnitude 5 earthquake, the highest since the volcano erupted on the Canary Island. At 6:56 a.m. local time, the tremor, which occurred at a depth of 38 kilometers and with an epicenter at Villa de Mazo, interrupted six hours of calm. So far, there have been only four earthquakes, well below the previous days. On Friday, experts working on the volcanic emergency plan for the Canary Islands detected that the volcano’s seismicity and sulfur dioxide emissions continue their downward trend, after the rebound recorded two days ago in these values.

Activity Summary:
Kīlauea volcano is erupting from a single vent in the western wall of Halemaʻumaʻu crater. As of this morning, November 11, 2021, lava is erupting at the summit. Activity has returned to levels observed prior to the brief decrease in activity. All lava activity is confined within Halemaʻumaʻu crater in Hawai‘i Volcanoes National Park. Seismic activity and volcanic gas emission rates remain elevated.

Summit Observations:
Sulfur dioxide (SO2) emission rates remain elevated, with an emission rate for November 9, 2021, of approximately 2600 tonnes per day. Summit tiltmeters recorded neutral tilt over the past day (i.e. no inflationary or deflationary trends). Seismicity remains stable. Earthquake activity remains below background and volcanic tremor remains elevated since the beginning of the eruption. 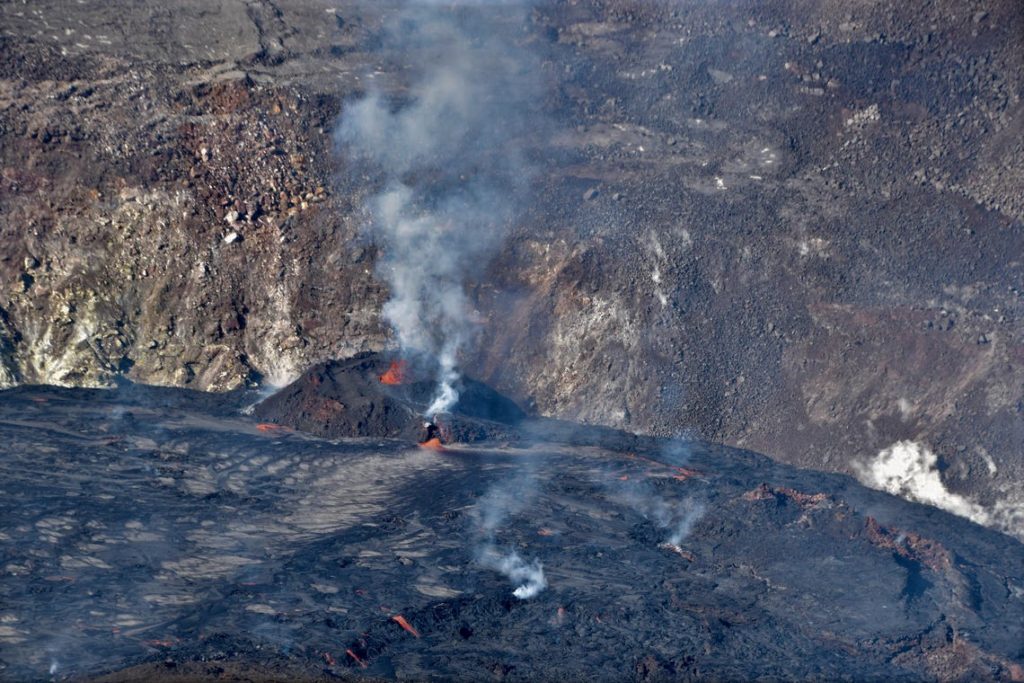 During a helicopter overflight of Halema‘uma‘u crater on November 9, HVO geologists observed spattering within the west vent cone and lava entering the lake via a spillway that is now tubed-over. Sulfur dioxide (SO2) emission rates remain elevated with the largest volcanic gas plume coming from the west vent.

Halemaʻumaʻu Lava Lake Observations:
Lava continues to erupt from a single vent in the western wall of Halemaʻumaʻu crater. The western end of the lake showed a maximum elevation of approximately 800 meters (2625 ft) above sea level by HVO’s permanent laser rangefinder this morning, and a total increase of about 57 meters (187 ft) since lava emerged on September 29. Webcams show spatter and ponded lava within the west vent and an increase in the area of active lava at the surface of the lava lake to an extent similar to that observed prior to the decrease in activity on Sunday (November 7, 2021). The total erupted volume since the beginning of the eruption was estimated to be about 27 million cubic meters (7.1 billion gallons) on November 9.

The weather around Mount Merapi is generally sunny in the morning and evening, while it is foggy in the afternoon.
This week, there were 2 hot avalanche clouds oriented to the southwest with a sliding distance of 1,500 to 2,000 m. Lava avalanches have been observed 123 times to the southwest with a maximum slide distance of 2,000 m.
No significant morphological change was observed in either the southwest dome or the central dome. The volume of the southwest lava dome is 1,610,000 m3 and the central dome is 2,927,000 m3.
This week’s seismicity intensity was higher than last week. The deformation of Mount Merapi which was monitored using EDM and GPS this week showed no significant changes.
The rainfall intensity was 176 mm / hour for 70 minutes at the Kaliurang post on November 8, 2021. There have been no reports of lahars or additional flow in the rivers that originate on Mount Merapi. 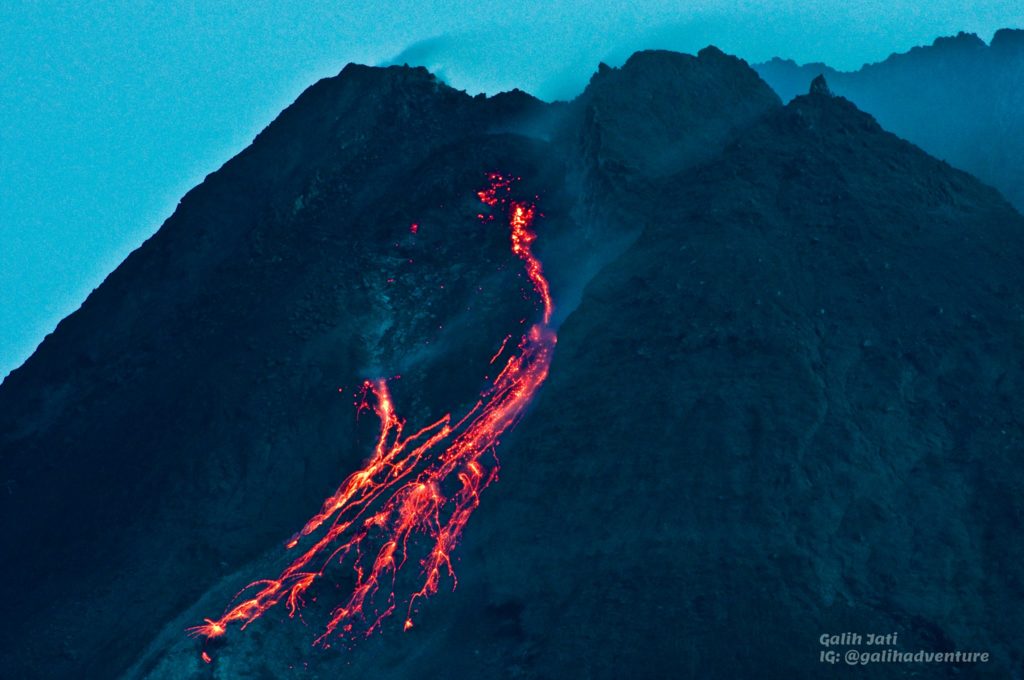 Conclusion:
1. The volcanic activity of Mount Merapi is still quite high in the form of effusive eruption activity. The status of the activity is defined in the “SIAGA” level.
2. The current potential danger consists of lava avalanches and hot clouds in the South-East-South-West sector over a maximum of 3 km to the Woro river and 5 km to the Gendol rivers, Kuning, Boyong, Bedog, Krasak, Bebeng and Putih. During this time, the ejection of volcanic material in the event of an explosive eruption can reach a radius of 3 km from the summit.

According to the seismographs of November 10, 2021, it was recorded:
184 avalanche earthquakes
40 emissions earthquakes
6 hybrid / multi-phase earthquakes
3 distant tectonic earthquakes

Seismicity was elevated during the past week at Pavlof. Tremor and explosion levels observed in seismic and infrasound data temporarily increased during the early part of the week; however, no widespread ash clouds or deposits were noted when weather conditions allowed satellite or webcam views of the volcano. A small lava flow was first noted in satellite data near the southeast vent on November 8. On November 10 a 2 km-long (1.2 mi) lahar deposit was visible in satellite images below the active southeast crater. A high-resolution satellite image on November 11 showed the lava flow extending 200 m (650 ft) below the active southeastern vent, while the lahar deposit from the previous day likely originated from a hot steaming area 1 km (0.6 mi) below the active crater. 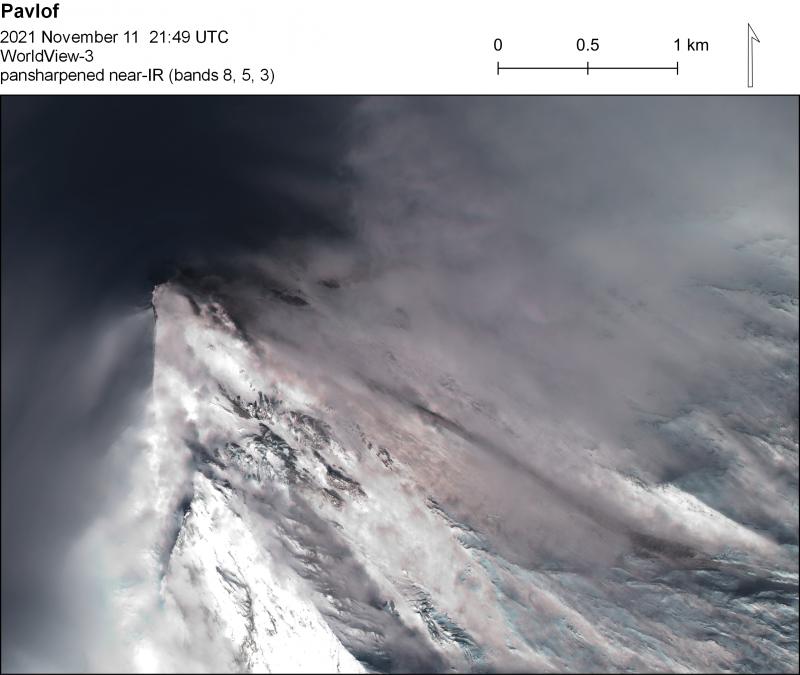 The explosions that have occurred during the current period of activity at Pavlof have been short-lived, with ash deposits confined to the flanks of the volcano. Collapse of lava flows on the steep flank of Pavlof could result in small pyroclastic flows downslope and generate lahars in drainages to the coast. Eruptive activity is focused at a vent on the upper southeast flank of the volcano, near the location of the eruptive vent in 2007. The level of unrest at Pavlof can change quickly and the progression to more significant eruptive activity can occur with little or no warning. 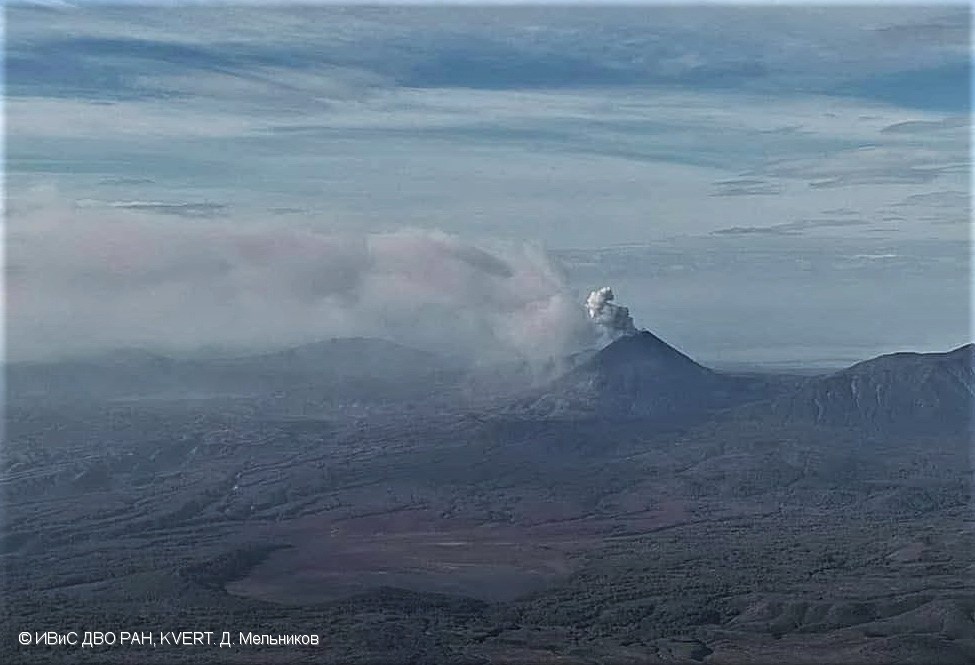 Volcanic Activity Summary:
The eruptive activity of the volcano continues. Satellite data showed explosions sent ash up to 5.0-5.3 km a.s.l., and ash cloud to drift for 56 km to the north-east of the volcano.
This activity continues. Ash explosions up to 10 km (32,800 ft) a.s.l. could occur at any time. Ongoing activity could affect international and low-flying aircraft.

Abstract
Over the past 18 months, the Fernandina volcano, located in the Galapagos archipelago, has experienced a slow deformation process that has intensified in recent weeks. The other monitoring parameters (seismicity, surface activity) show no change and remain at low levels. However, it is important to indicate that this deformity could be premonitory of a new eruption in the medium to long term (weeks to years). The Institute of Geophysics – EPN continues to monitor the evolution of these parameters and will timely report any changes in the internal or surface activity of the Fernandina volcano. 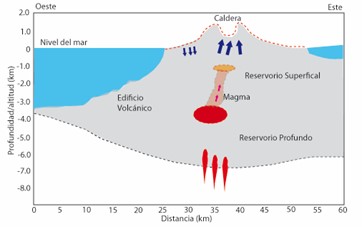 Figure 1. Diagram of the origin of the deformation recorded in the Fernandina volcano (based and modified by Geist D. et al, 2006).

context
The Fernandina volcano presented its last eruptive process on January 12, 2020, which lasted about 9 hours and was characterized by the opening of a crack located under the eastern edge of the caldera, where lava flows were emitted towards the eastern flank (Special Volcanic Report 2020 N ° 02). In addition, a gas cloud was generated which reached a maximum height of 3.5 km above sea level. In the weeks following the eruption, increased seismicity associated with soil deformation had been recorded (Special Volcanic Report 2020 N ° 03). However, this internal activity did not trigger a new eruption and, over time, the seismic activity decreased to return to the base level. With 27-29 eruptions recorded since 1800, Fernandina Volcano has the highest rate of eruption recurrence in the Galapagos Islands.

Seismicity
In the last 4 years, Fernandina has experienced 3 eruptions: September 2017, June 2018 and January 2020. Between the eruptions of 2018 and 2020, the rate of seismicity showed a constant increasing trend until the eruption of January 2020. Since March 2020, seismicity in the region has remained low, as shown in Figure 2.

Since the peak of the last eruption on January 13, 2020, no thermal anomalies or gas or ash emissions have been detected on the volcano thanks to the available remote sensors.

For the deformation analysis, interferometric processing of Synthetic Aperture Radar (InSAR) images is performed, along with images from the European Space Agency (ESA) Sentinel-1 satellite constellation, at the using ISCE and Mintpy software. Images for the study period were obtained with descending orbits between February 2020 (after the last eruption) and October 2021. 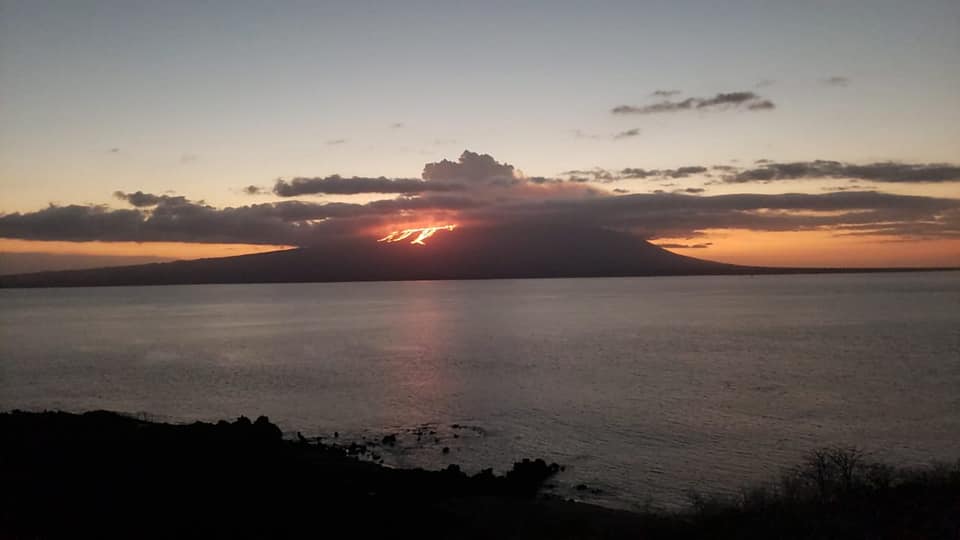 Based on the deformation data and modeling, it is suggested that the magmatic material causing this deformation could be related to two sources: a surface source located about 2 km below the surface associated with a volume of 6.8 million m3 and a deep source located 4.5 km below the surface with a volume of 10.2 million m3 … / …

Conclusions and recommendations
At present, the Fernandina volcano presents a notable deformation within the caldera (inflation) and on its southwest flank (deflation which turned into inflation in October 2021), which could be premonitory of a future eruptive activity in the medium-long term (weeks to years). There are no human settlements on Fernandina Island and in the event of another eruption, local flora and fauna could be affected. IG-EPN recommends staying informed of the activity of the Fernandina volcano through official sources. 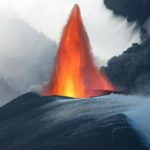 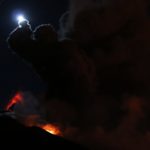