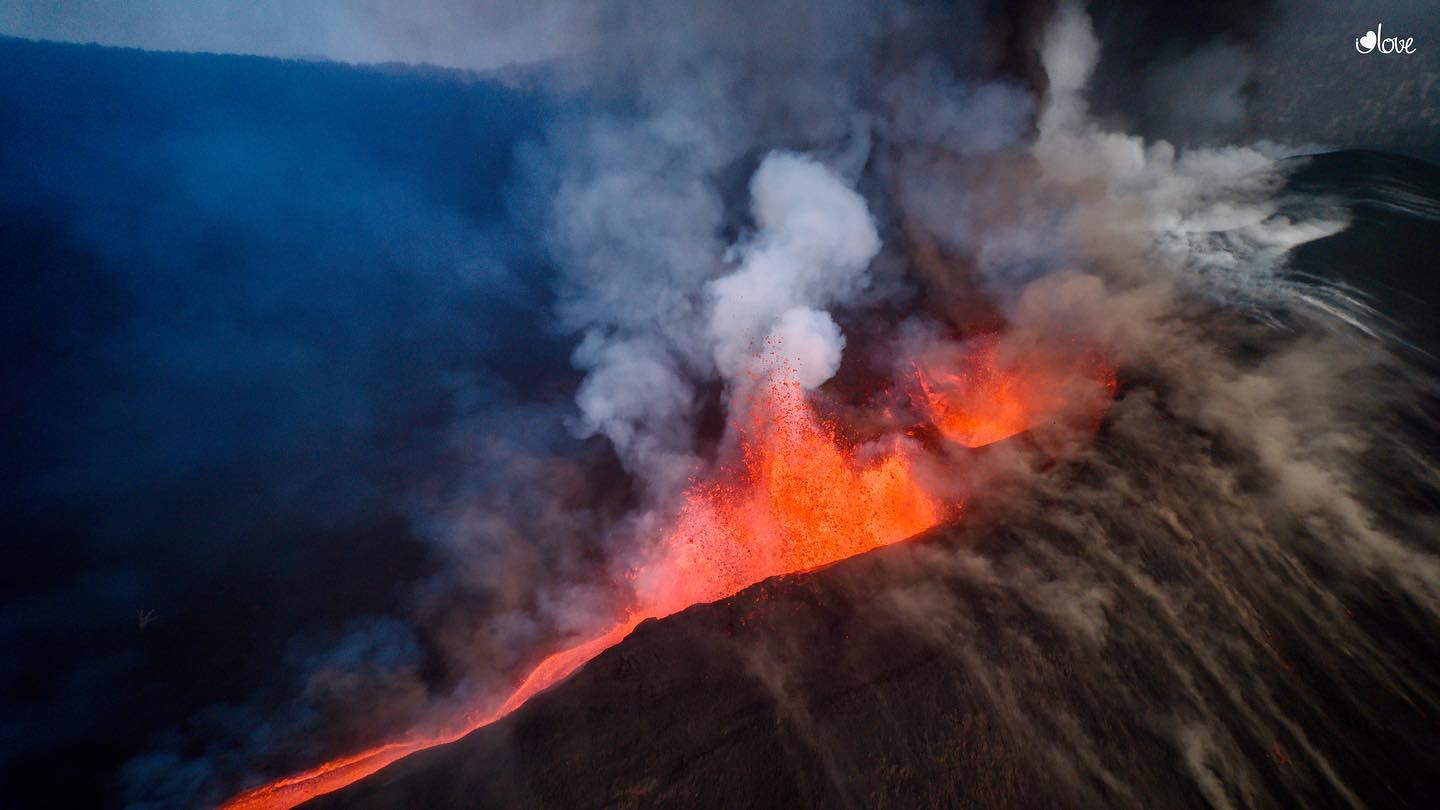 Lava flow from the Cumbre Vieja volcano in La Palma, which devastated the La Laguna gas station, has apparently slowed its advance towards the city’s interior, the Canary Islands Volcanological Institute (Involcan) reported on Thursday. For the moment, it is heading mainly towards the coast. The magma covers 866.1 hectares and destroyed 2,185 buildings, including 229 more in 48 hours, according to data from Copernicus, the European Union’s Earth observation program. Seismic activity has increased slightly in recent hours on the island, where 50 earthquakes were recorded overnight, according to data from the National Geographic Institute (IGN). The greatest magnitude, 4.3, occurred at Villa de Mazo, 37 kilometers below the surface. 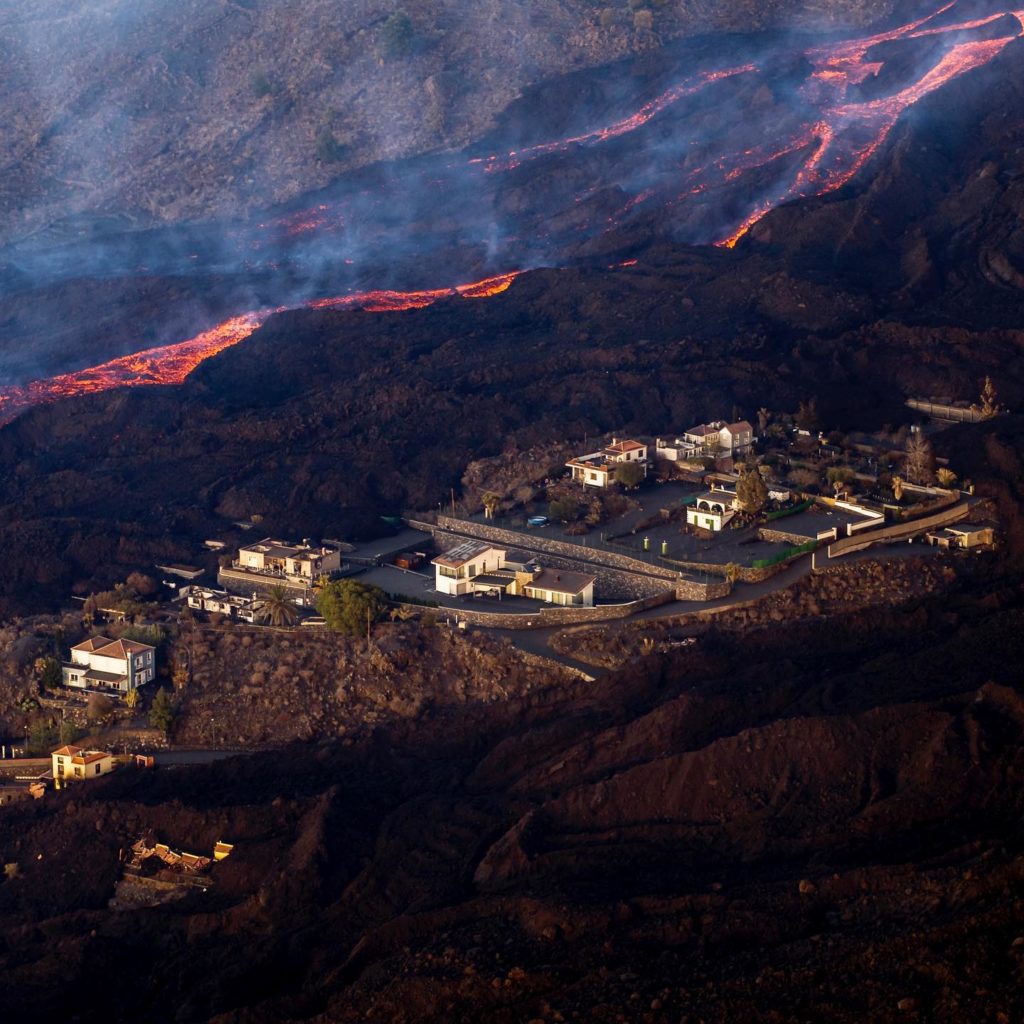 Since the last press release, 124 earthquakes have been located in the area affected by the volcanic reactivation of Cumbre Vieja, 12 of these earthquakes were felt by the population, the maximum intensity being in the epicentral zone IV (EMS98) , with the earthquakes that occurred at 13:43 UTC on the 20th, with a magnitude of 3.6 mbLg and at 2:14 a.m. today, with a magnitude of 4.3 mbLg and depths of 11 and 37 km respectively. The earthquake of 2:14 today (4.3 mbLg) is the largest earthquake of the period considered.

A single earthquake was located at a depth of about 30 km, the rest of the hypocenters of the period are located at a shallower depth, about 12 km.
The volcanic tremor signal maintains a high average amplitude, with few intensification pulses.

The height of the emission column measured at 08:00 UTC is estimated at 4000 m.
The island’s network of permanent GNSS stations still does not show a clear tendency to warp from stations closest to eruptive centers, while at more distant stations a slight deflation is maintained, possibly related to seismicity. deep. 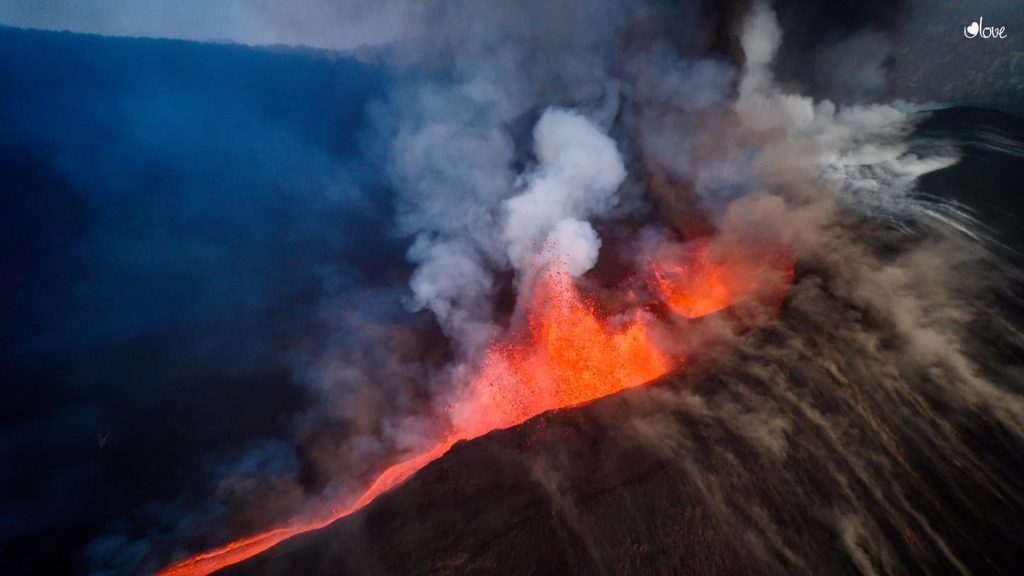 The neighborhood of La Laguna (Los Llanos de Aridane) eagerly follows the evolution of the two lava flows that entered its urban area on Wednesday and which, converted into a single language, slowed their advance towards the interior of the city and seem to take a direction that would take them away from this area to go towards the mountain. This is the least harmful option for this evacuated neighborhood, which in recent hours has seen the threat of disappearing buried under the lava, as happened a few weeks ago in Todoque. However, the Canary Islands Volcanic Emergency Plan (Pevolca) considers a second option: that this flow continue to overcome the various hollows that they find in its path and end up running towards the coast, which would cause greater damage.

The National Institute of Geophysics and Volcanology, Osservatorio Etneo announces that from around 5:20 p.m. UTC, a gradual increase in explosive activity is observed at the level of the Southeast Crater which generates the projection of fragments of incandescent material in the -beyond the edge of the crater. Currently, the current activity produces discontinuous and weak ash emissions which disperse in the direction of the eastern quadrants of the volcanic building.

The average amplitude of the volcanic tremor is currently at average levels with a slight tendency to increase. The location of the centroid of the volcanic tremor sources remains located in the area between Voragine and Bocca Nuova at an altitude between 2900 and 3000 m above sea level. Infrasound activity remains at low levels.
At present, soil deformation monitoring networks do not show significant variations. 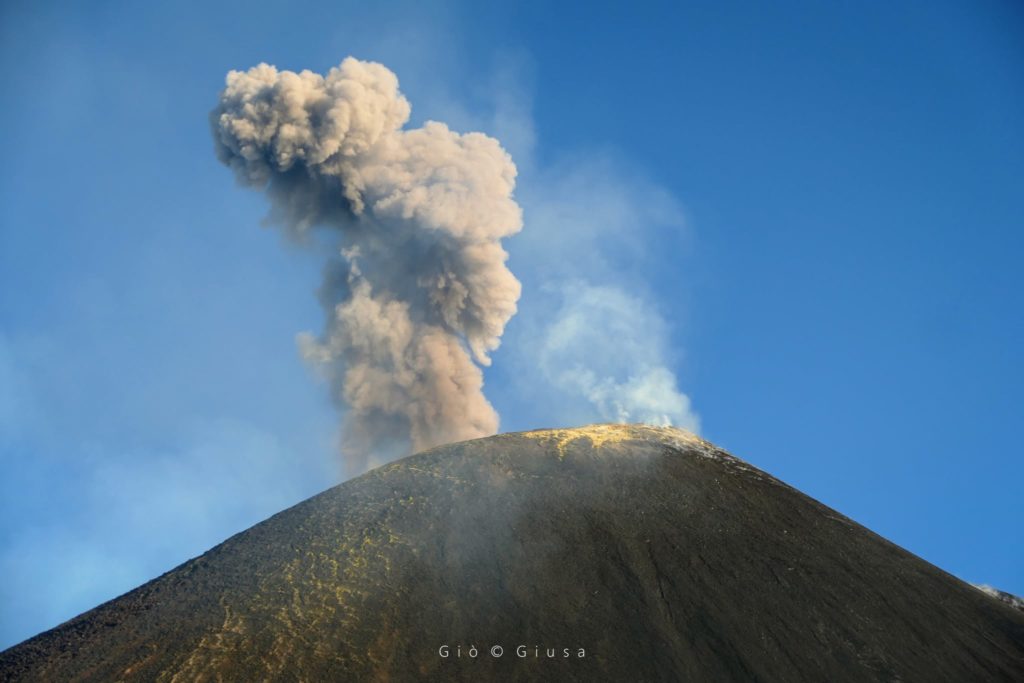 Remarks: THE PHENOMENON IS OBSERVED BY VISIBLE AND
THERMAL SURVEILLANCE CAMERAS

The seismicity generated by rock fracturing increased in number of earthquakes and seismic energy released, compared to the previous week. This seismic activity was located mainly in the West, South-South-West, East and North-East sectors of the volcano and in the Arenas crater. The depths of the earthquakes varied between 0.7 and 6.7 km. The highest magnitude recorded during the week was 1.4 ML (Local Magnitude), corresponding to the earthquake that occurred on October 18 at 10:25 p.m. (local time), located 4.4 km southwest of the crater. Arenas, 3.8 km deep.

There were several episodes of low energy drumbeat-type seismicity associated with the fracturing of the rock on October 13 and 15. This seismicity has been linked to the processes
of ascent, location-growth and evolution of a lava dome at the bottom of the Arenas crater.

Seismicity related to fluid dynamics inside volcanic conduits increased in number of recorded earthquakes and released seismic energy, compared to the previous week. This type of seismicity was characterized by the recording of continuous volcanic tremor of low to moderate energy level, sometimes spasmodic and pulsating, as well as tremor pulses, earthquakes of long and very long period types with high energy levels. variables. These earthquakes were mainly located in the Arenas crater. Some of these signals were associated with gas and ash emissions confirmed by cameras installed in the volcano area and by reports from officials of the Colombian Geological Service and Los Nevados National Natural Park. In addition, a fall of volcanic ash was reported in the west to southwest sector of Manizales on the morning of October 18, 2021.

Activity Summary:
Kīlauea volcano is erupting. As of this morning, October 21, 2021, lava continues to erupt from a single vent in the western wall of Halemaʻumaʻu crater. All lava activity is confined within Halemaʻumaʻu crater in Hawai‘i Volcanoes National Park. Seismic activity and volcanic gas emission rates remain elevated.

Summit Observations:
Sulfur dioxide (SO2) emission rates remain high, with a preliminary emission rate for October 17, 2021, of approximately 2,700 tonnes per day. No significant changes seen in summit tilt or GPS observations. Earthquake activity remains below background and volcanic tremor remains elevated since the beginning of the eruption. 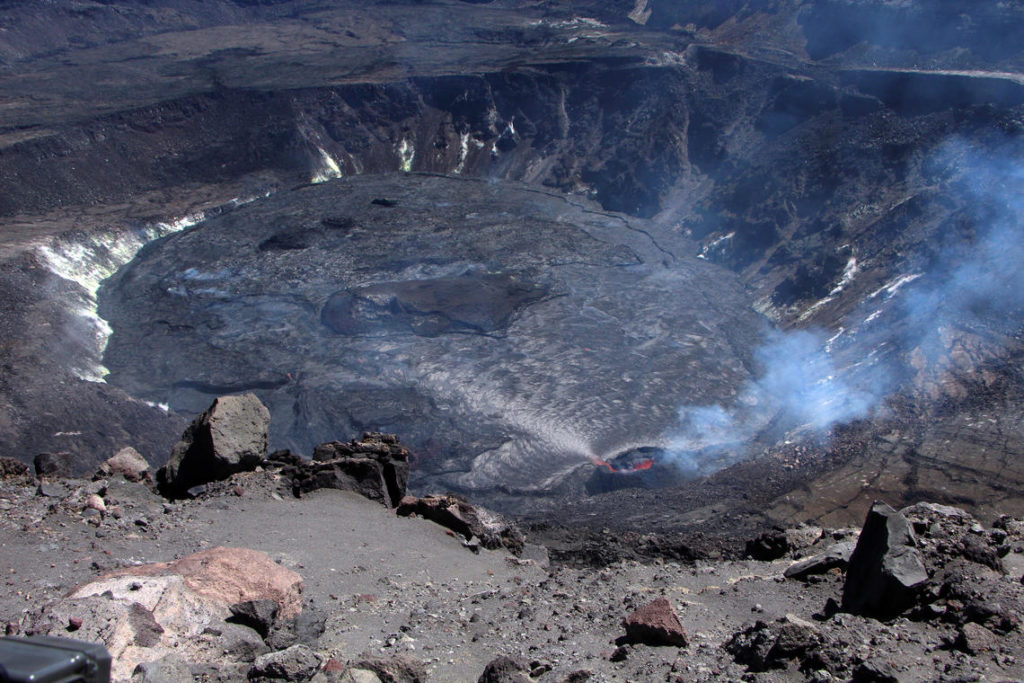 View looking east (standing on the western rim of Kīlauea caldera) of the the lava lake in Halema‘uma‘u crater and the west vent feeding the lava lake. Parts of the eastern lava lake are still rising but do not have active lava flows across the top of their surface. The western part of the lava lake still has active flows at the surface, which flow around the north and south of the brown island in the middle of the lava lake.

Halemaʻumaʻu Lava Lake Observations:
Lava continues to erupt from a single vent in the western wall of Halemaʻumaʻu crater. The western end of the lake showed a maximum elevation of approximately 791 meters (2595 ft) above sea level by HVO’s permanent laser rangefinder on October 21, 2021, which is a 1 meter (3 ft) increase relative to the October 19, 2021, measurement and a total increase of about 47 meters (154 ft) since lava emerged on September 29. The total erupted volume since the beginning of the eruption was estimated to be about 19.9 million cubic meters (5.3 billion gallons) on October 15. The western vent had consistent fountain heights up to 5 m (16 ft) with occasional bursts up to 10 m (33 ft) observed by field crews on October 20. The lava lake is not level across its surface due to the location of the vent in the western end. There is about 8 meters (26 feet) elevation difference between the active west and stagnant east part of the lake.

Based on satellite and wind model data, the Darwin VAAC reported that during 8-9 October ash plumes from Kadovar rose to an altitude of 1.5 km (5,000 ft) a.s.l. and drifted W and NW. 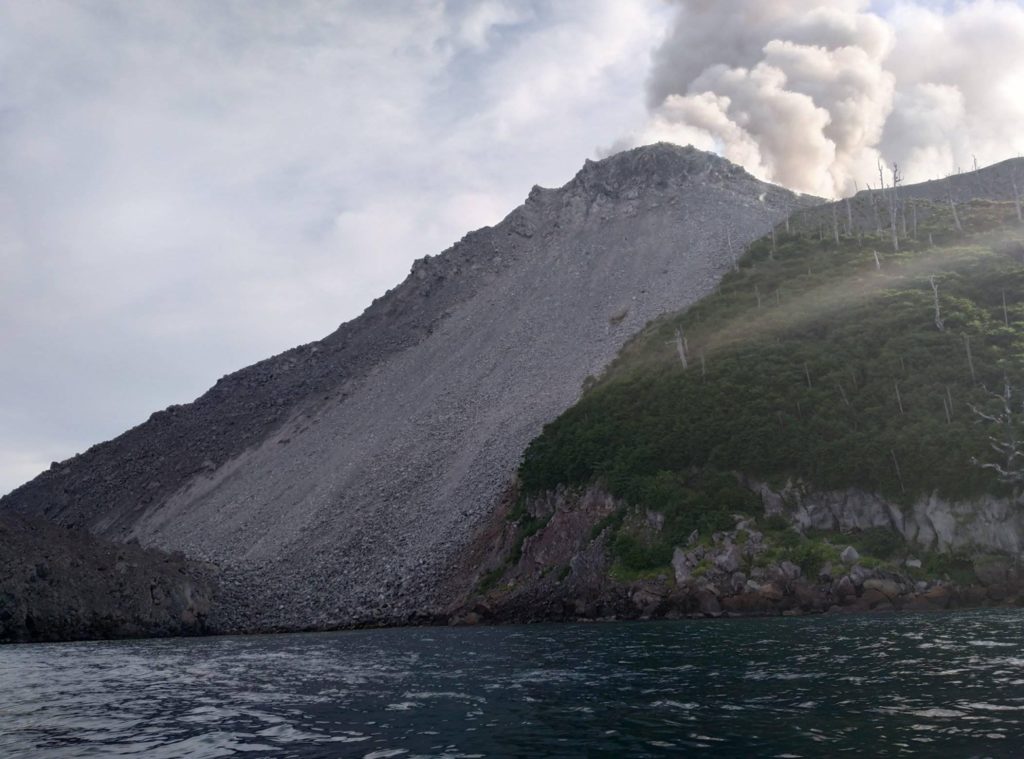 The 2-km-wide island of Kadovar is the emergent summit of a Bismarck Sea stratovolcano of Holocene age. It is part of the Schouten Islands, and lies off the coast of New Guinea, about 25 km N of the mouth of the Sepik River. Prior to an eruption that began in 2018, a lava dome formed the high point of the andesitic volcano, filling an arcuate landslide scarp open to the south; submarine debris-avalanche deposits occur in that direction. Thick lava flows with columnar jointing forms low cliffs along the coast. The youthful island lacks fringing or offshore reefs. A period of heightened thermal phenomena took place in 1976. An eruption began in January 2018 that included lava effusion from vents at the summit and at the E coast. 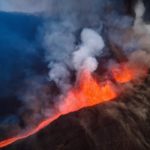 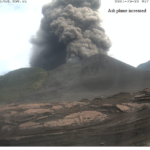