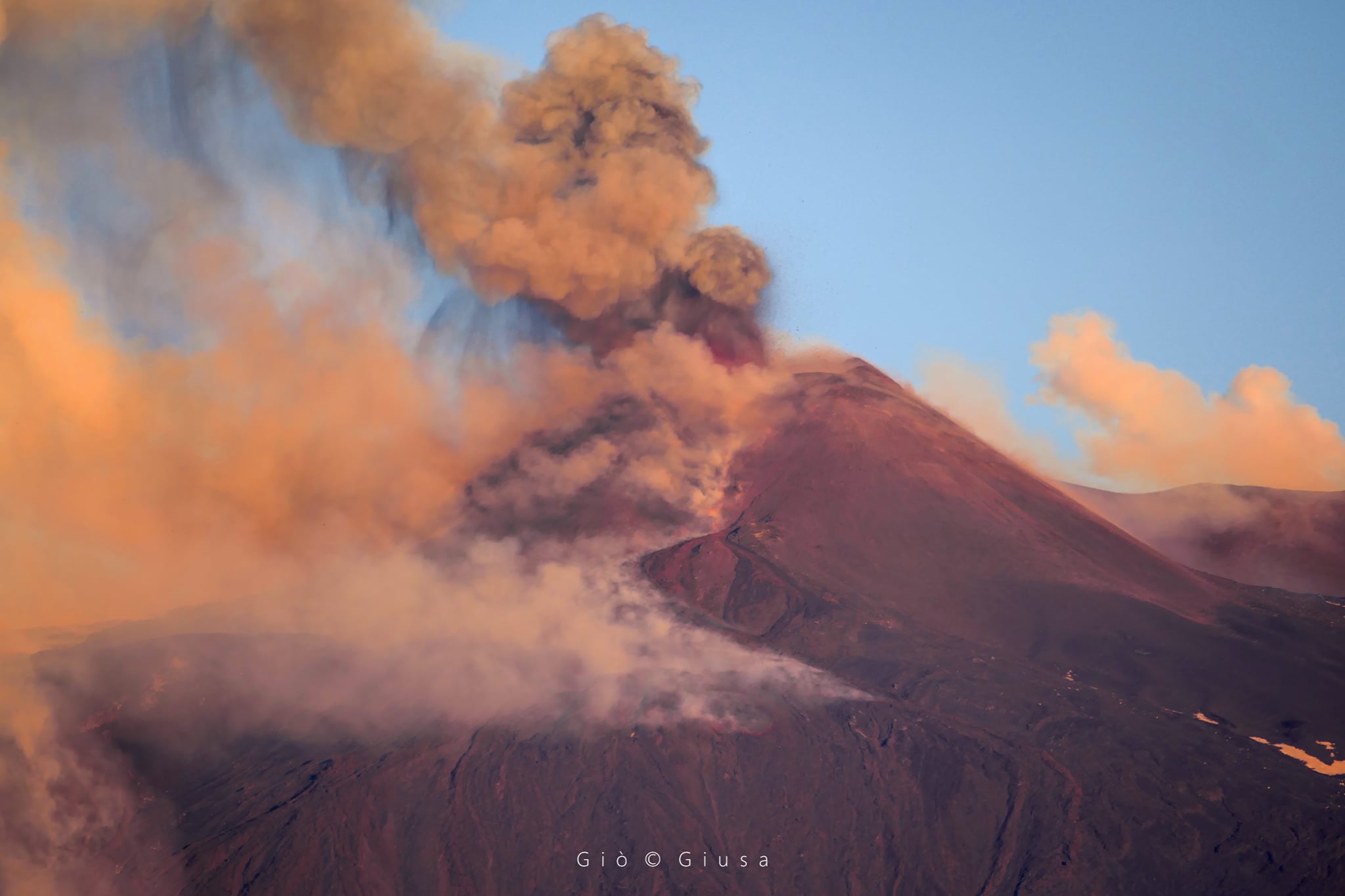 The National Institute of Geophysics and Volcanology, Osservatorio Etneo, announces that from around 08:00 UTC, the lava fountain produced by the Southeast Crater has ceased, but intense explosive activity remains, which produces a cloud volcanic which reaches about 5500 m of altitude According to the forecast model, the eruptive cloud produced by the current activity disperses towards the South. In the morning, light ash falls were reported in the town of Milia and the town of Nicolosi. Compared to the previous press release, the position of the lava flow fronts remains virtually unchanged. Currently, inspections are underway in the summit area by INGV staff for the sampling of the products of the eruptive activity and the observation of the development of the lava field and active lava fronts. 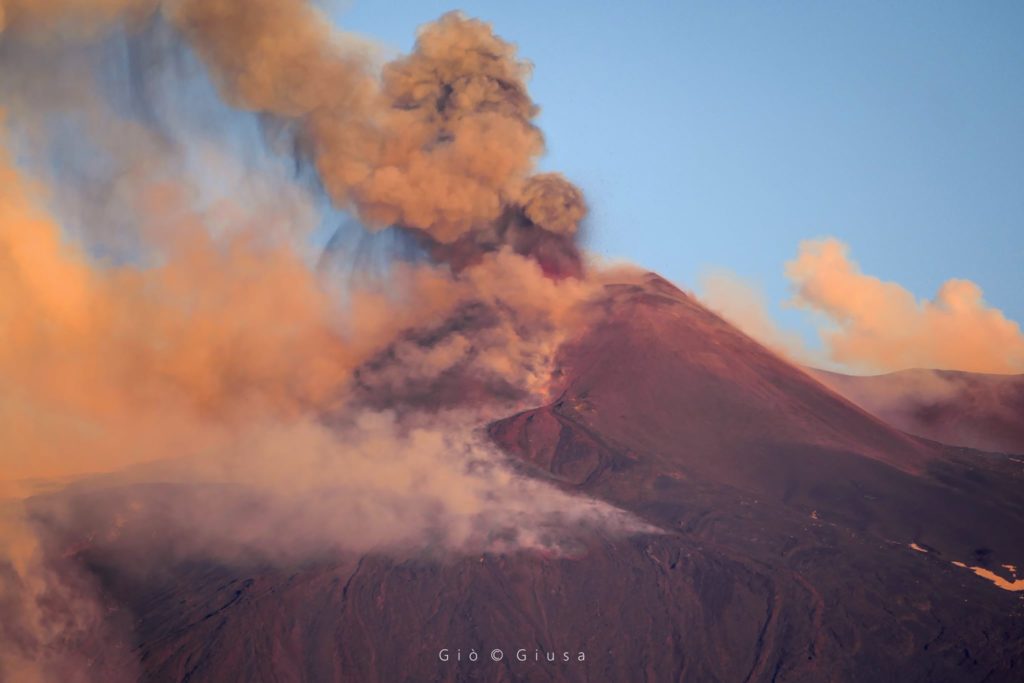 From around 07:20 a.m. (UTC), a gradual decrease in the average amplitude values ​​of the volcanic tremor is observed, which remain at high levels. The center of gravity of volcanic tremor sources continues to be located in the Southeast Crater area at an altitude of between 2,500 and 2,700 m above sea level.
Even the infrasound activity which remains localized at the Southeast Crater, from 06:20 (UTC) shows a continuous decrease in the values ​​of the frequency of occurrence and the amplitude of events, as well as a substantial decrease in the amplitude of the infrasound tremor.
No significant change detected by GNSS ground deformation and tilt monitoring networks compared to previously communicated.

From approximately 11:20 UTC, the decrease in explosive activity at the Southeast Crater is observed. Due to the cloud cover, the observation of the current activity from the surveillance cameras is very limited and discontinuous, however the lava flows and the first lava overflow, which took place in the Valle del Bove, and the second overflow, which reached the eastern base of the Southeast Crater, appears to be less fueled than previously reported. The cloud cover does not currently allow any observation of the lava flows which have propagated towards the southwest, the south and the southwest. 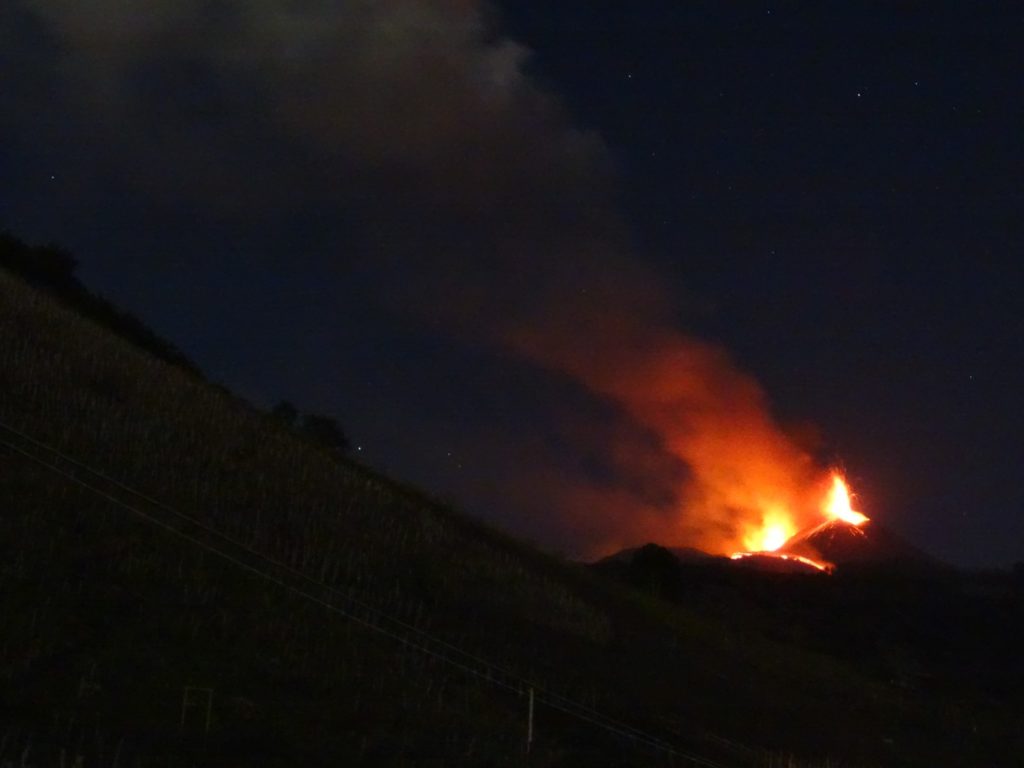 INGV staff on the ground this morning confirms that the front of the southwest lava flow is about 2,600 m above sea level. and that the south-southwest flow front also reached an elevation of about 2600 m. at the time of observation. In addition, in the morning and around 11:00 UTC, INGV staff reported a layer of lapilli of about 1 cm at Rifugio Sapienza and a thin layer of ash at Nicolosi and Catania.
The decrease in the mean amplitude values ​​of the volcanic tremor continues, reaching medium-high levels with a tendency to decrease. The center of gravity of the sources of volcanic tremor is located in correspondence with the Southeast Crater at an altitude between 2500 and 2700 m.
The infrasound activity further decreased and returned to the levels that had preceded the paroxysmal event and is currently located in the Northeast Crater and the Bocca Nuova / Voragine region.
The time series of GNSS and tilt stations do not show substantial changes.

From the surveillance cameras, it is observed that the lava flows that took place in the upper western sector of the Valle del Bove (or at least three main flows can be distinguished) seem less fed with the fronts that are between approximately 2100 m and 1700 m altitude.
In addition, still on the western edge of the Valle del Bove, thermal anomalies can be distinguished, probably attributable to the fronts of other lava flows which have not yet overflowed from the edge and therefore remain confined to an altitude of about 2700 m above sea level. 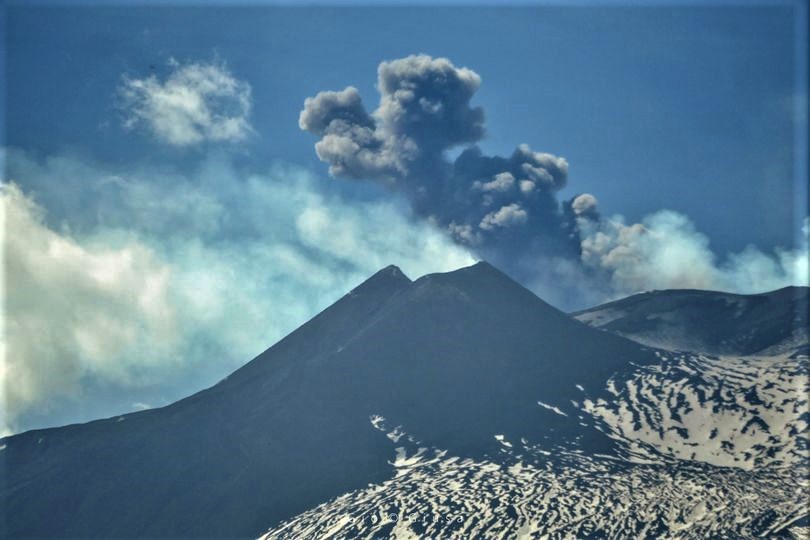 The lava overflows from the eastern edge of the Southeast Crater cool down further, we mainly observe blocks which, standing out from the fronts, roll towards the Valle del Bove. Finally, the flow which has developed in the southwest direction no longer appears supplied and cooled. From the surveillance cameras, no explosive activity was observed at the Southeast Crater; intra-crater activity at the Northeast Crater and at Bocca Nuova remains, as well as the intra-crater explosive activity of the Voragine crater which generates discontinuous ash emissions which rapidly disperse in the summit area.
The average amplitude of the volcanic tremor continues to be maintained at medium-high levels. The center of gravity of the sources of volcanic tremor remains in the area of ​​the Southeast Crater at an altitude of between 1500 and 1300 m above sea level.
The infrasound activity remains at a low level and the sources are located in the Northeast Crater and the Bocca Nuova / Voragine area.
The time series of GNSS and tilt stations do not show substantial changes.

Recent work and news
In the past month there were three major water eruptions of Steamboat Geyser, on March 3, 18, and 27. This brings the total number of eruptions for the year to 7. During winter months, the interval between Steamboat eruptions is longer than during the summer, probably due to lower groundwater levels in the absence of runoff from snow melt. If the geyser follows the patterns established since 2018, we expect to see the time between eruptions decrease as summer approaches.

Seismicity
During March 2021, the University of Utah Seismograph Stations, responsible for the operation and analysis of the Yellowstone Seismic Network, located 105 earthquakes in the Yellowstone National Park region. The largest event was a minor earthquake of magnitude 2.4 located 16 miles southeast of Mammoth, WY, on March 3 at 2:31 PM MST.

A small swarm of 12 earthquakes, with magnitudes between -0.1 and 1.8, was recorded in the area of Old Faithful, Yellowstone National Park, during March 9–16. The largest event of the swarm occurred on March 9 at 2:29 PM (MST) and was located nine miles north-northwest of Old Faithful.

Activity Summary:
Kīlauea Volcano is erupting. Lava activity is confined to Halemaʻumaʻu with lava erupting from a vent on the northwest side of the crater. This morning, April 1, the lava lake was 224 m (735 ft) deep and remains stagnant over its eastern half. SO2 emission rates remain elevated at 700 t/day, last measured on March 31. 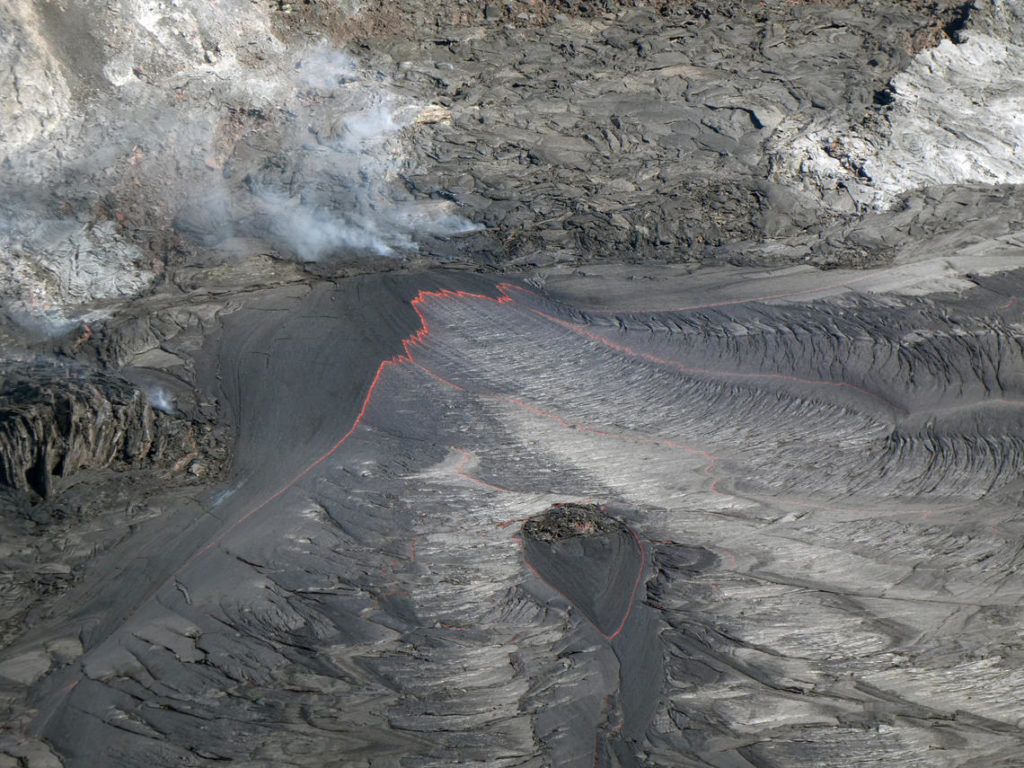 The western fissure remains active, supplying lava to the lava lake in Halema‘uma‘u Crater, at the summit of Kīlauea. This photo shows a close-up of the inlet where lava enters the lake. The motion of the lava stream has been slow but continuous.

Summit Observations:
The most recent sulfur dioxide emission rate, measured on March 31, was 700 t/day. This is elevated compared to rates in the months before the eruption started on December 20 (less than 100 t/day), but lower than emission rates from the pre-2018 lava lake (around 5,000 t/day). Summit tiltmeters recorded neutral tilt over the past day (no inflationary or deflationary trends). Seismicity remains stable, with elevated tremor.

East Rift Zone Observations:
No unusual activity noted in the region. Geodetic monitors indicate that the summit and upper East Rift Zone—between the summit and Puʻu ʻŌʻō—is refilling at rates similar to those measured over the past 2 years and before the December 2020 eruption. SO2 and H2S emissions from Puʻu ʻŌʻō were below instrumental detection levels when last measured on January 7. 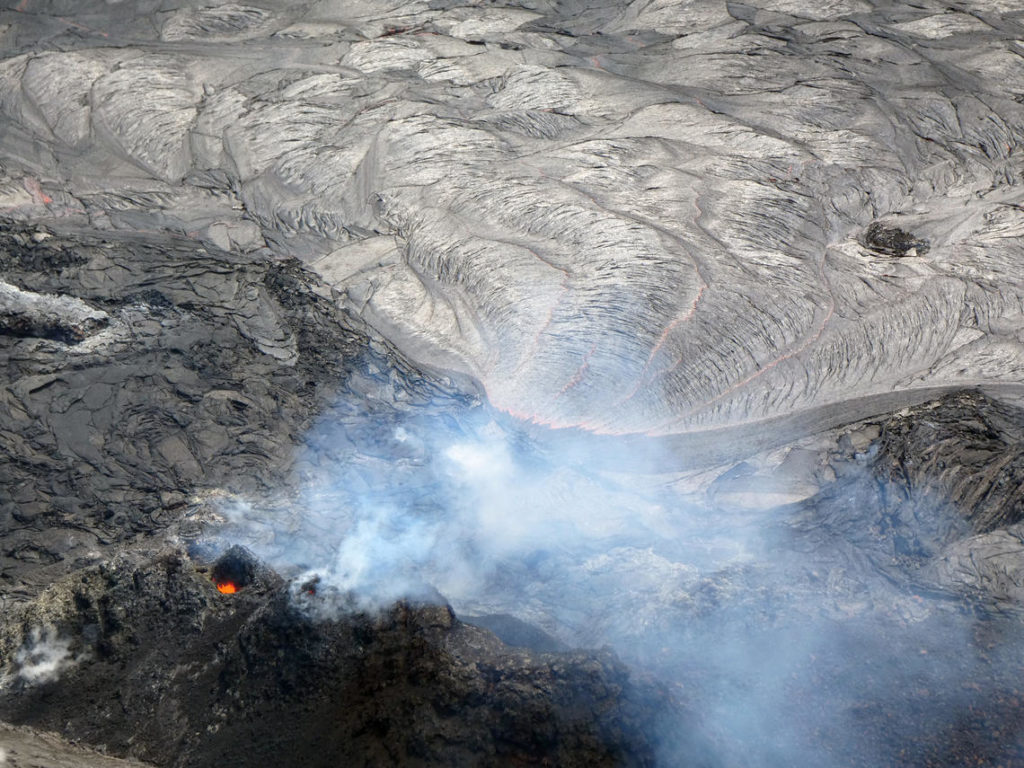 This photo was taken from the western caldera rim, and looks down up on the western fissure supplying lava into the lake in Halema‘uma‘u, at the summit of Kīlauea. Incandescence is visible in a small vent opening in the lower left portion of the image. In the upper right, the lava stream at the lake inlet slowly flows eastward. 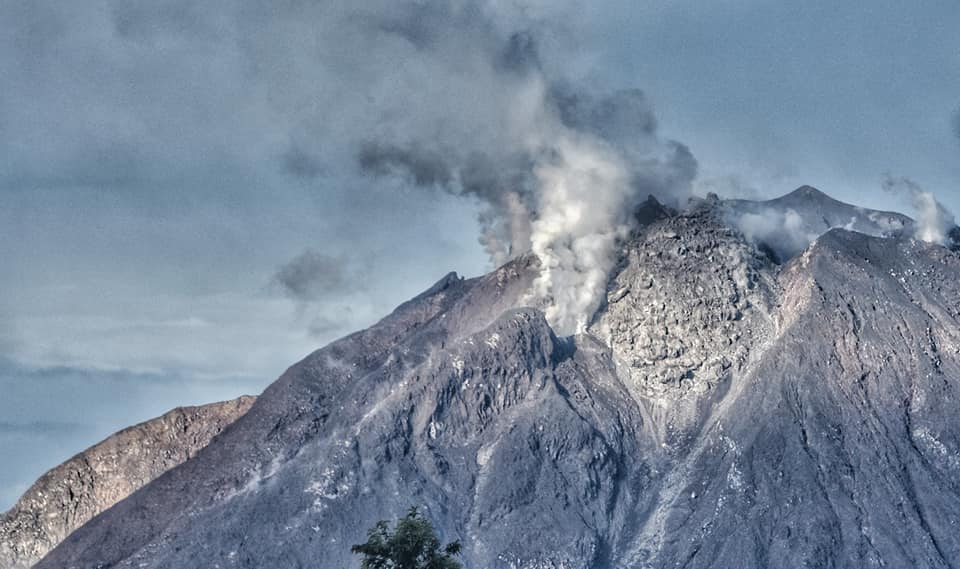 According to the seismographs of April 1, 2021, it was recorded: 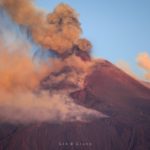 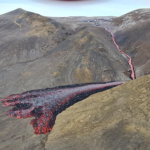