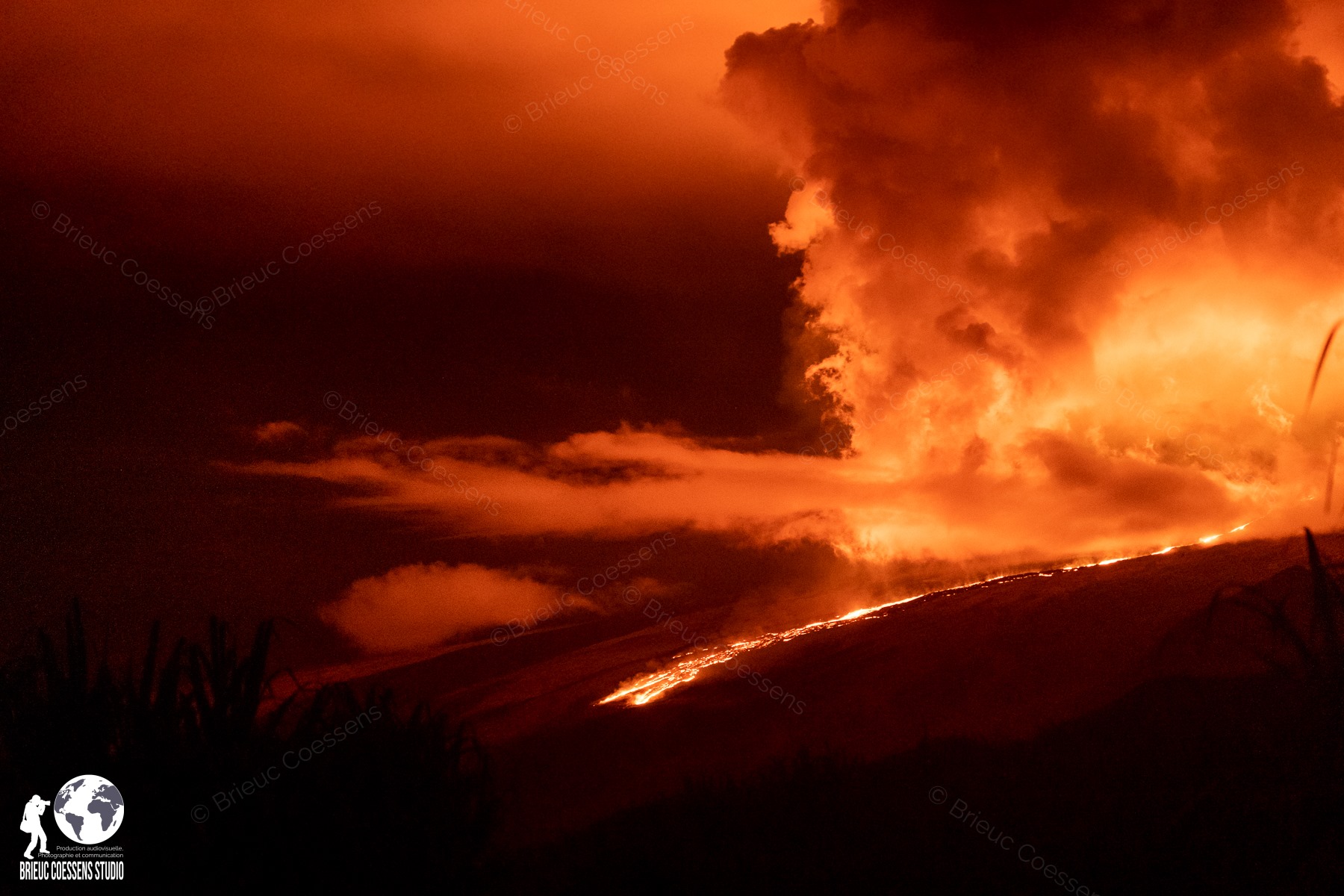 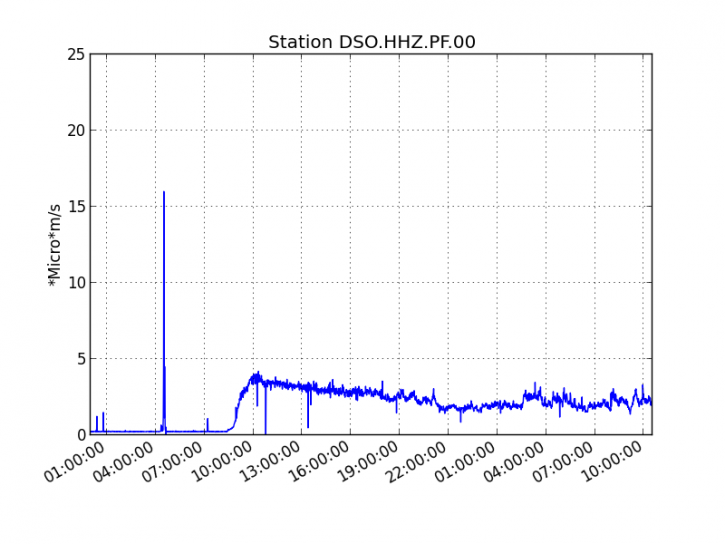 This morning, at 06:25, the flow front could be estimated at about 1000 m above sea level at the top of the Grandes Slopes, and 3.8 km from the national road, according to visual feedback from the webcam of the ‘OVPF / IPGP located in Piton Cascades (Sainte Rose; Figure 2). 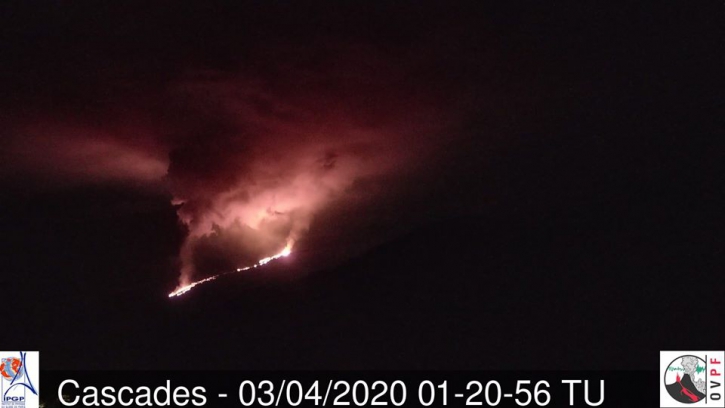 Since the start of the eruption no significant deformation has been recorded, and 5 superficial volcano-tectonic earthquakes (<2 km deep) have been recorded under the summit craters.
Note that during the lateral magma intrusion towards the eruptive site on April 2, between 8:50 am and 12:20 pm, and following the seismic crisis (8:15 am – 8:51 am), the deformations and seismicity were extremely weak. Lateral propagation was thus done in a fairly « passive » way in an already open environment and extremely weakened by the eruptions of 2019 and the eruption of February 10-16, 2020 which took place in this sector.

The CO2 fluxes in the far field soil (Plaine des Cafres / Plaine des Palmistes sectors) fell between 28/3 and 01/4 before increasing again. This could correspond to an expulsion of superficial magma (superficial reservoir) by a rise of deeper magma.
SO2 air flows have dropped since yesterday. This drop is in agreement with the visual feedback from the eruptive site (Figure 2) which shows weaker activity today.
The estimated surface flows, based on satellite data via the HOTVOLC platform (OPGC – University of Auvergne) are greatly disturbed by the cloud cover around the Piton de la Fournaise. Estimates made since the start of the eruption fluctuate between 2 and 45 m3 / s with an average around 7-10 m3 / s. 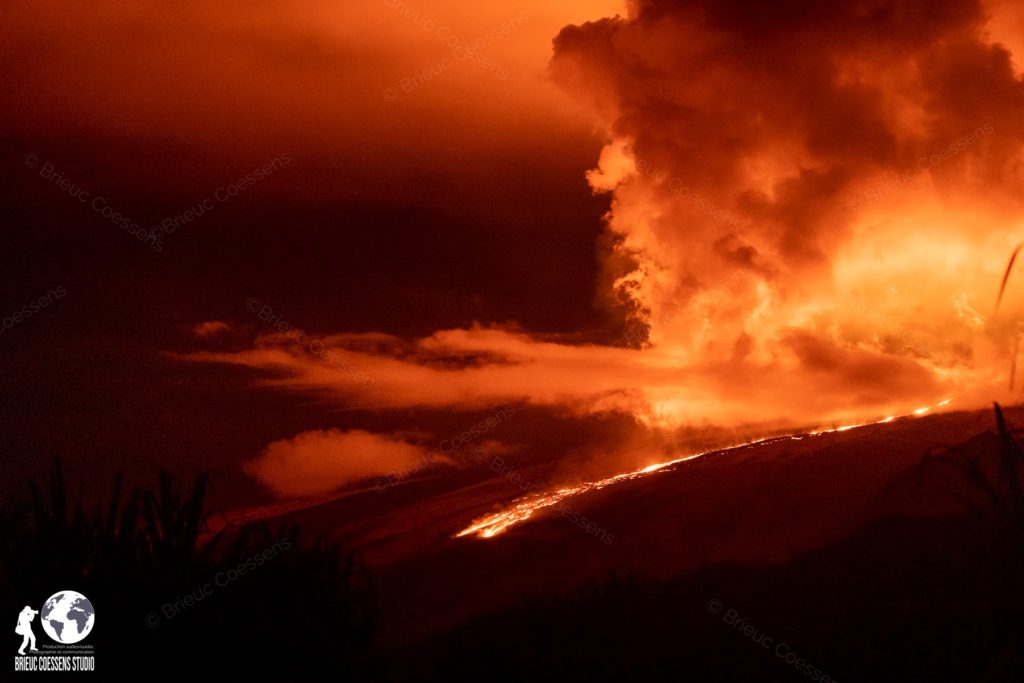 Activity Summary:
Kīlauea Volcano is not erupting. Monitoring data for the month of March show variable but typical rates of seismicity and ground deformation, low rates of sulfur dioxide emissions, and only minor geologic changes since the end of eruptive activity in September 2018.

Observations:
Monitoring data have shown no significant changes in volcanic activity in March.

Rates of seismicity over the month were variable but within a range observed over the past year. Sulfur dioxide emission rates are low at the summit and are below detection limits at Puʻu ʻŌʻō and the lower East Rift Zone. The water pond at the bottom of Halema’uma’u continues to slowly expand and deepen. As of March 19th, pond dimensions are approximately 107 meters (~351 feet) by 211 meters (~692 feet). As of April 1st, the current depth is approximately 32 meters or 105 feet. 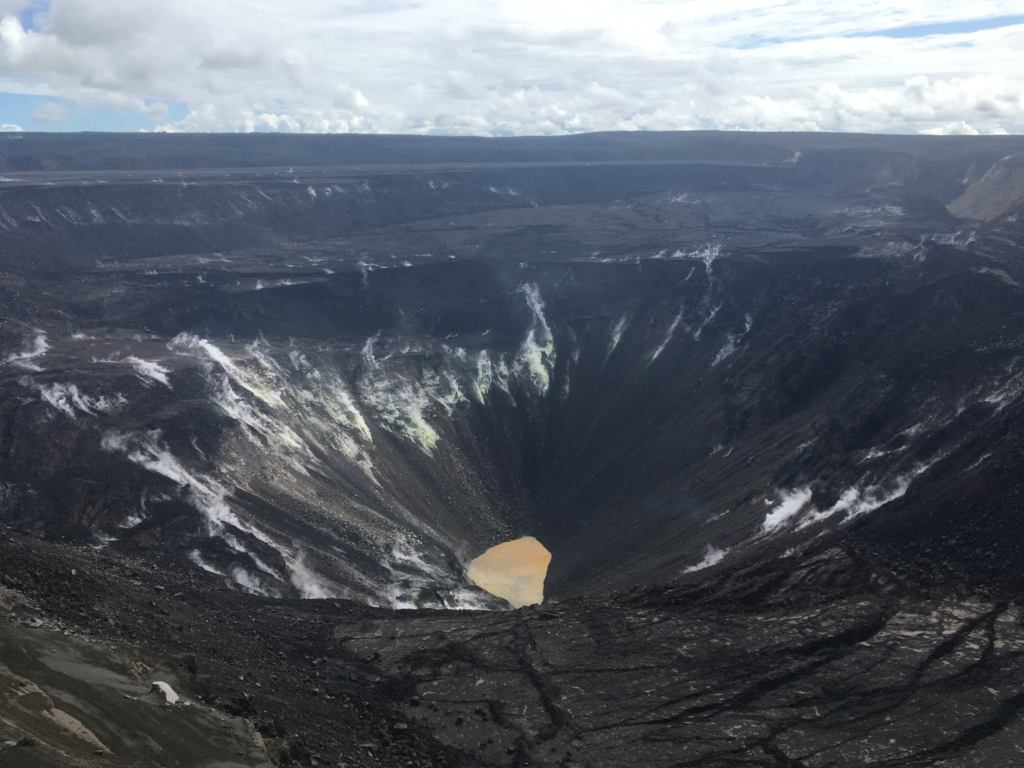 A wider view of Halema‘uma‘u, in a rare window of clear weather during the past week. USGS photo by M. Patrick.

Over the past month, the summit tiltmeter recorded 10 deflation-inflation events, a number similar to January and February. Since March 2019, GPS stations and tiltmeters at the Kīlauea summit have recorded deformation consistent with slow magma accumulation within the shallow portion of the Kīlauea summit magma system (1-2 km or approximately 1 mile below ground level). Gas measurements show continuing low levels of sulfur dioxide emission from the Halema’uma’u area, consistent with no significant shallowing of magma. Some amount of sulfur dioxide is being dissolved into the summit lake and work continues to try and quantify this process. The pond was last sampled by UAS in January and additional, regular sampling with UAS is planned. 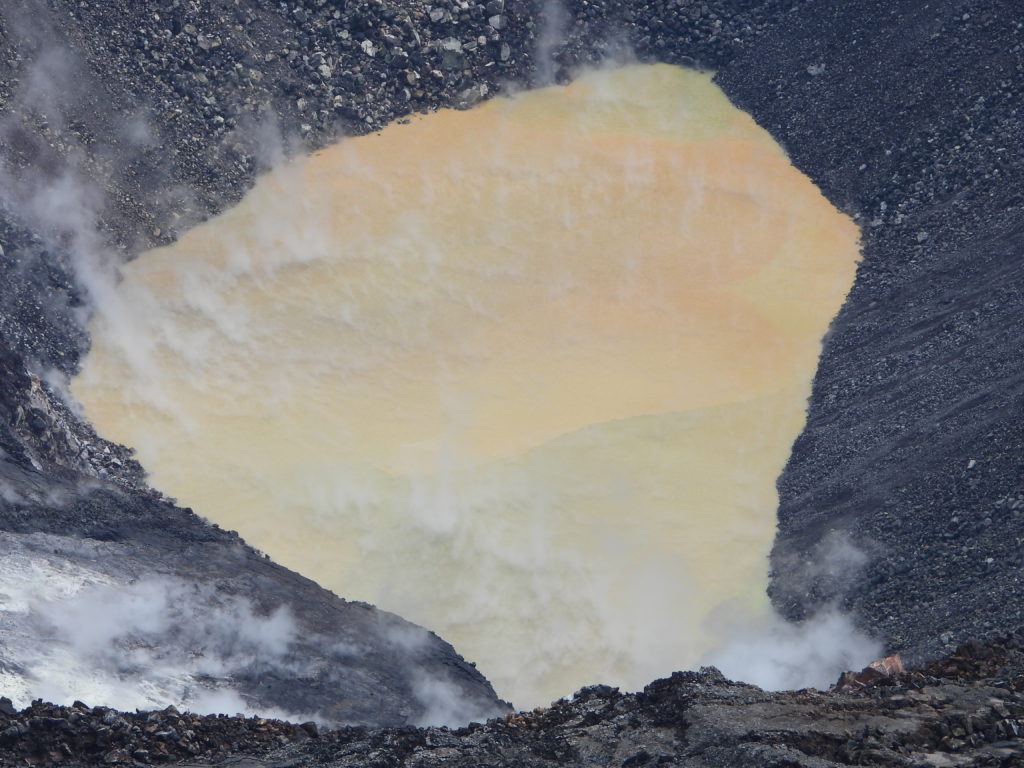 No significant changes were observed in the water pond in Halema‘uma‘u Crater, at Kīlauea’s summit. The water surface still has an orange-brown hue in the center, with greenish areas on the east and west ends (top and bottom of photo) presumably indicating influx of groundwater. USGS photo by M. Patrick.

Farther east, GPS stations and tiltmeters continue to show motions consistent with slowed refilling of the deep East Rift Zone magmatic reservoir in the broad region between Puʻu ʻŌʻō and Highway 130. The decrease in deformation rates at tilt station POO, observed in February, continued throughout March. GPS station JOKA, and tilt station JKA, in the lower East Rift Zone, experienced an episode of deformation from March 14-26th with a different direction from the longer term trend. Data retrieved manually in the next few weeks may provide more insight. Monitoring data do not suggest any imminent change in volcanic hazard for this area. The south flank of Kīlauea continues to creep seaward at elevated rates following the May 4, 2018 M6.9 earthquake near Kalapana. HVO continues to carefully monitor all data streams along the Kīlauea East Rift Zone and south flank for important changes.

From March 3 to 18, 2020, a group of volcanologists from the Geophysical Institute of the National Polytechnic School (IG-EPN) and the French Research Institute for Development (IRD) carried out a field mission on the Volcano Sierra Negra, located on Isabela Island (Galapagos). The objective of this mission was to study the eruptive cracks and volcanic products of the eruption that occurred between June 26 and August 23, 2018. 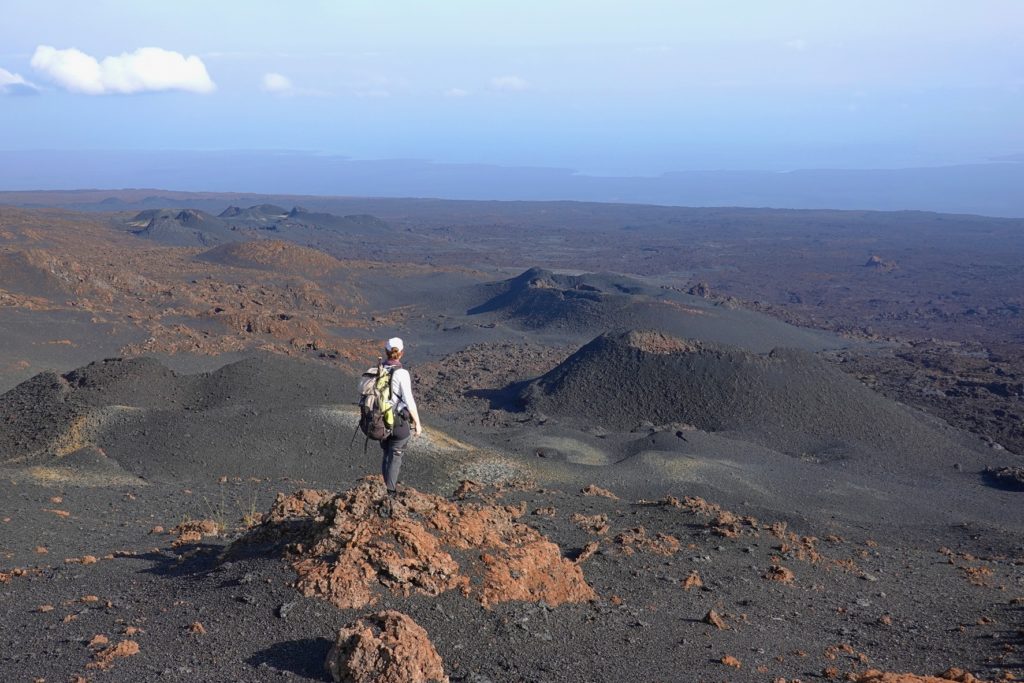 Figure 1. View of the slag and projection cones formed during the Sierra Negra volcano eruption in 2018 (Photo: B. Bernard, IG-EPN).

The Sierra Negra is an active volcano that has experienced at least 8 eruptions in the last century. In addition, its activity represents a threat to the city of Puerto Villamil, tourism and agriculture on Isabela Island. This volcano has been monitored by IG-EPN with a multi-parameter network (seismicity, deformation and gas) since 2014, in cooperation with the Directorate of Galapagos National Park (DPNG). In order to improve the evaluation of the volcanic risks associated with the activity of Sierra Negra, since last year, the teachers of the IG-EPN and the researchers of the IRD carried out a research project on the products, mainly lava, from the 2018 eruption (Fig. 2). 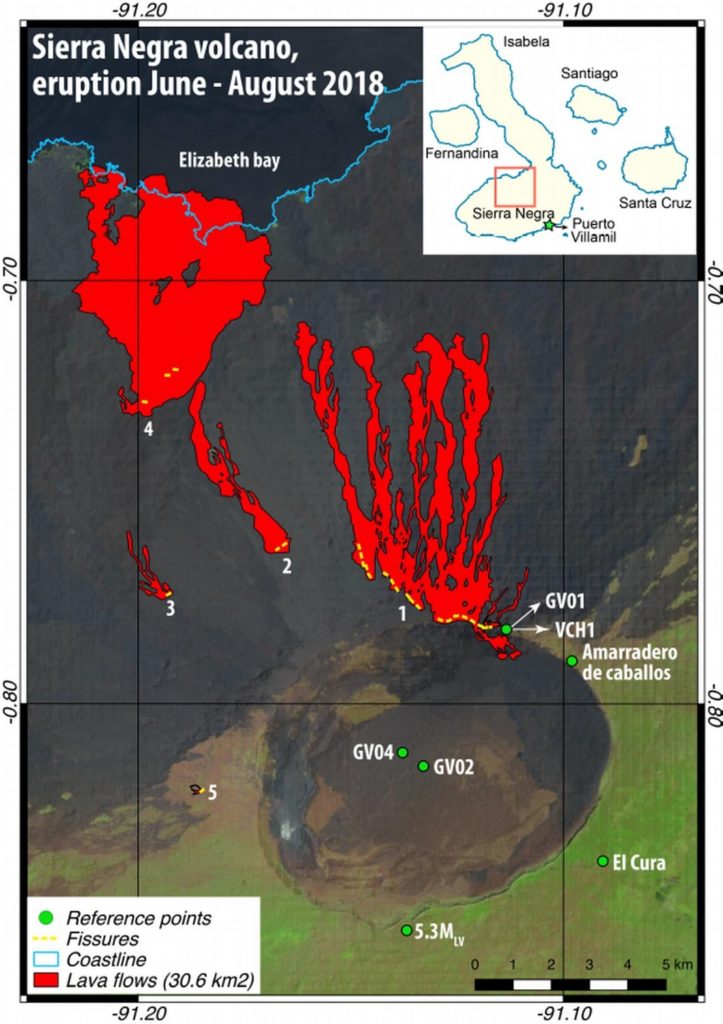 The members of the mission were Benjamin Bernard and Silvia Vallejo, professors of the IG-EPN; Oryaëlle Chevrel, IRD researcher; and Henry Calderón, student at the Faculty of Engineering in Geology and Petroleum (EPN). They were constantly accompanied and guided by the Rangers, Máximo Mendoza and Xavier Jaramillo, Captain Franklin Gil and the sailor Francisco Pomboza from the DPNG.
During the fieldwork, samples of slag, splash and lava were taken to study and analyze them in detail in order to know the characteristics of the magma responsible for the eruption (Fig. 3). In addition, photographs were taken with unmanned aerial vehicles (drones) to perform more detailed mapping of cracks and lava flows, and to study their spatial distribution. The results obtained will serve as inputs for the application of numerical models allowing to reproduce the distribution of lava flows emitted in 2018. 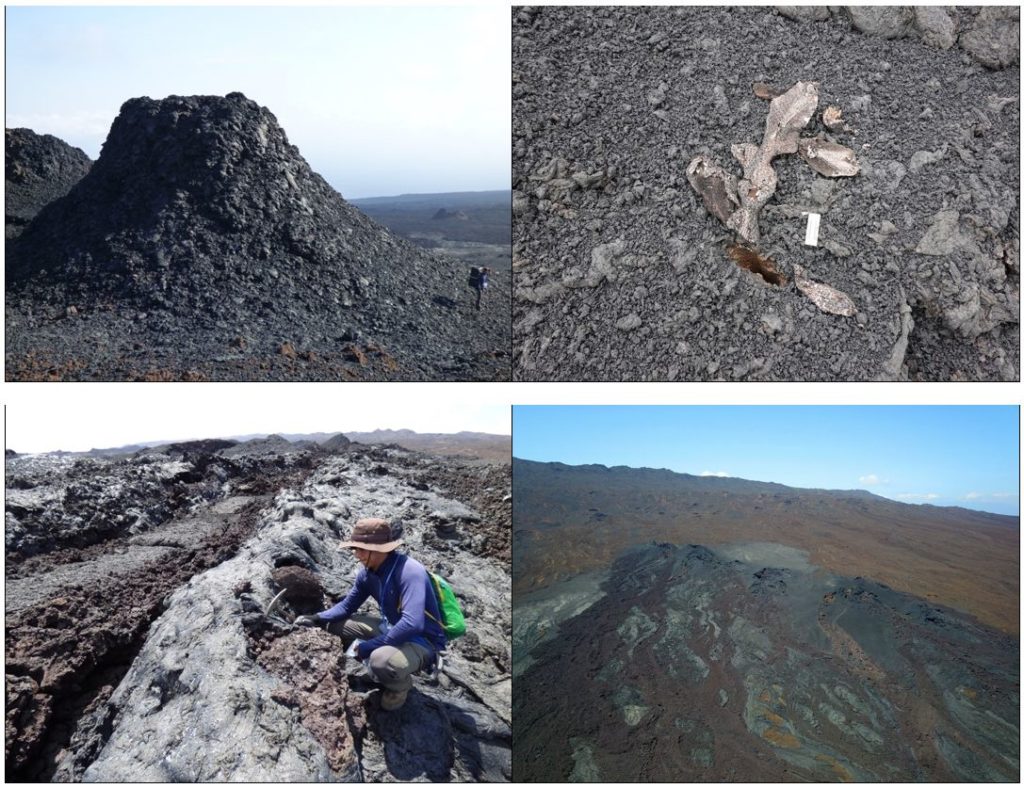 Finally, in order to share and disseminate the objectives of this project, two interviews were given to the DPNG rangers and the guides of Puerto Villamil.
This research project « Study of eruptive cracks, magmatic discharges and the rheology of recent lava flows in the Galapagos » (PIJ-18-02, director: Benjamin Bernard) is funded by the Office of the Vice-Rector for Research, EPN Innovation and Liaison. The work carried out is part of the interinstitutional cooperation agreement between EPN and DPNG for volcanic and seismic monitoring of the Galapagos Islands and has the scientific research permit PC-01-20.
The participants in this mission thank the collaboration and logistics provided by the DPNG – Isabela, in particular Leonardo García and the rangers who participated in the field. In addition, they thank the Intercultural Outreach Initiative (IOI) for the materials provided for the camps.

Yesterday, Friday April 03 at 04:17 local time (07:17 UTC), the monitoring stations installed near the Chaitén volcano recorded an earthquake associated with both the fracturing of rocks and the dynamics of fluids in the volcanic system. (Hybrid type). 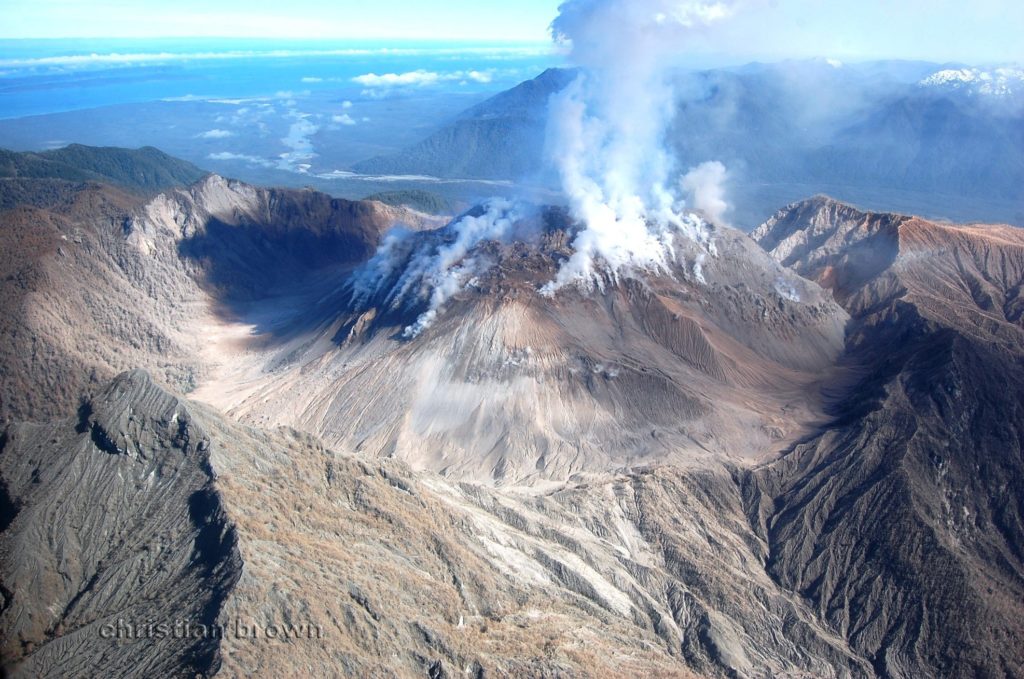 This Friday, April 03 at 04.17 local time, an earthquake of local magnitude 2.8 located 3.2 km deep was recorded under the summit of the Chaitén volcano. The National Service of Geology and Mines has indicated that this earthquake was of a hybrid nature, that is to say caused by the fracturing of rocks and the internal transit of fluids.
It should be noted that the Chaitén volcano is active, and generated a plinian eruption in 2008, which was followed by the construction and collapse of a series of domes (accumulations of viscous lava). 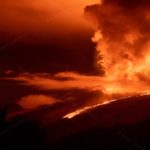 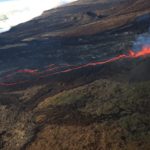