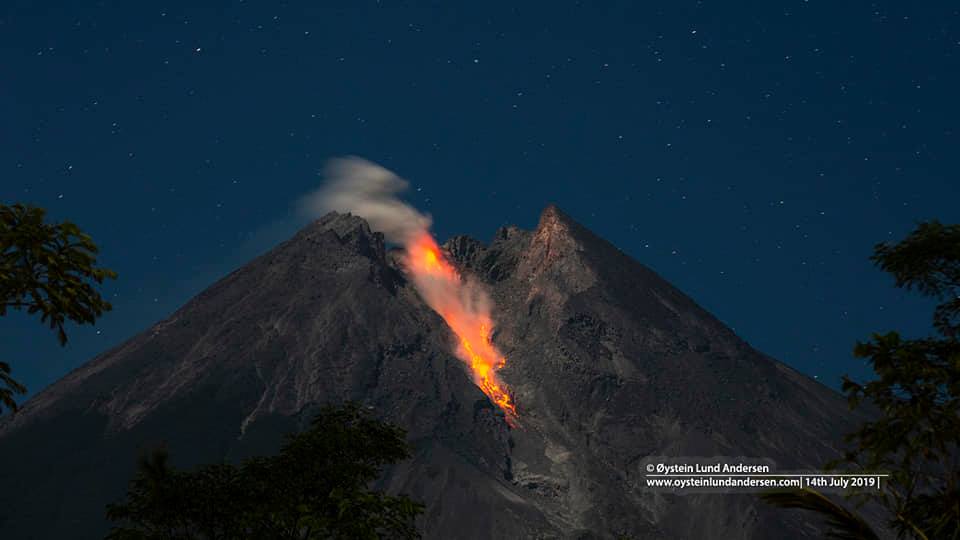 During the weekend, vigorous explosive and effusive activity have continued at #Stromboli. Here is the latest communiqué from the INGV-Osservatorio Etneo, 15 July 2019, 08:05h UTC.

The Istituto Nazionale di Geofisica e Vulcanologia, Osservatorio Etneo, reports that observations made with the surveillance cameras at 400 m elevation and by INGV staff in the field on the island indicate that explosive activity has continued in much the same manner as during the previous days. Yesterday (14 July) evening, there has also been a new lava overflow from the northern area of the crater terrace, which this morning had stopped and was cooling. Lava overflows continue from the central-southern area of the crater terrace, covering the upper to mid portions of the Sciara del Fuoco. Hot material being shed from the active lava flow fronts continues to slide down to the coastline. 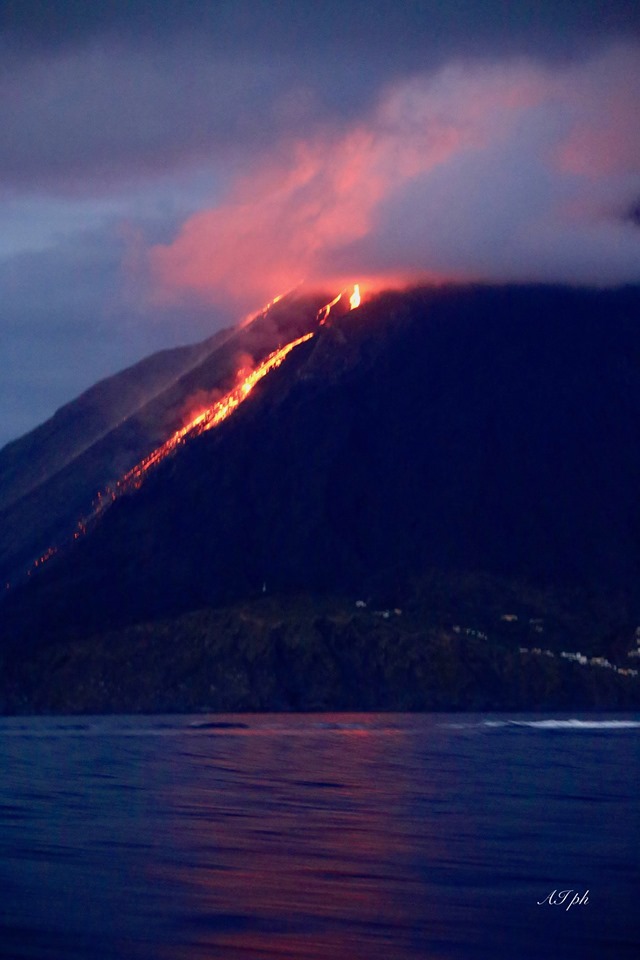 As for the seismic activity during the past 24 hours, there has been an increase in the mean amplitude of events associated with the explosive activity. The volcanic tremor continues to oscillate between modest and high amplitude values, and does not show significant variations compared to the previous days. 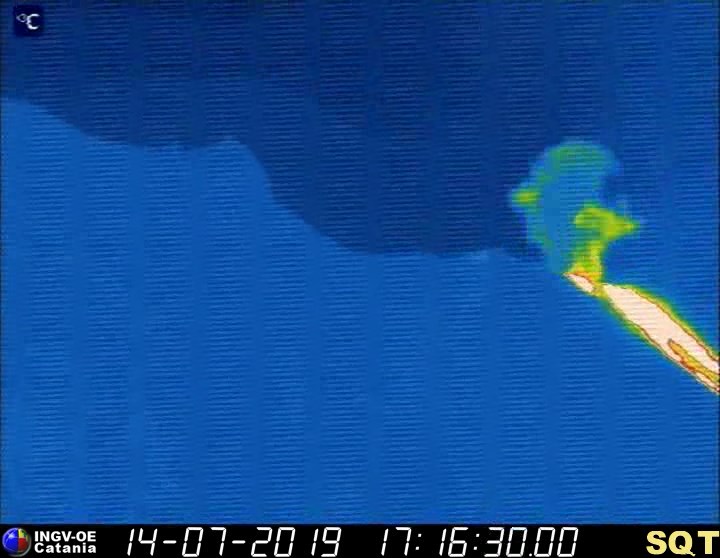 The photos below were extracted from video of the thermal and visual surveillance cameras located at 400 m elevation on the north side of the Sciara del Fuoco, and show a thermal image of the 14 July lava overflow from the northern vents of the crater terrace, and a particularly strong explosion from the central-southern vent area.

From 6h UTC today (15/07/19), there is a marked acceleration of the gas release from the north-east part of the crater terrace, with a SO2 flux reaching very high values (254 t / at 9:45 UTC) (Figures 1 and 2). Similar SO2 flux values were measured only during the 2014 effusive eruption.
This acceleration is coupled with a gradual upward trend in SO2 flux that has persisted since mid-May.
Overall, the data acquired confirms the increase in magma transport in the uppermost parts of the ducts. This is also confirmed by the superficialization of the VLP seismic source.

In recent hours, overpressure, associated with explosive activity, has increased and is 4 to 5 times above average (Figure 3).
The infrasonic network recorded at 19:40 UTC yesterday an explosion of a width of 180 Pa (450 meters from the craters) comparable to the overpressures released during the big explosions.

Figure 3. Trend of infrasonic pressures in the last month. We see how the sound pressure of the explosions increased considerably after the paroxysmal event of July 3, 2019. During the last 12 hours, the overpressure released by the explosive activity is comparable to that recorded during the big explosions.

All data confirm a very high level of explosive activity that reflects a continuous supply of the magmatic column that is now on the surface since the breakthrough.

Please note that this documentation is subject to copyright. Therefore, it may be published in newspapers and / or news sites only if the source is cited and linked:

Since Sunday morning (July 14, 2019), a weak explosive activity is underway (again) at the new crater southeast of Etna. Initially, it was brown ash emissions, but this activity became Strombolian the same day. This activity also continued yesterday morning. More details soon after the publication of a statement of the INGV-Osservatorio Etneo. 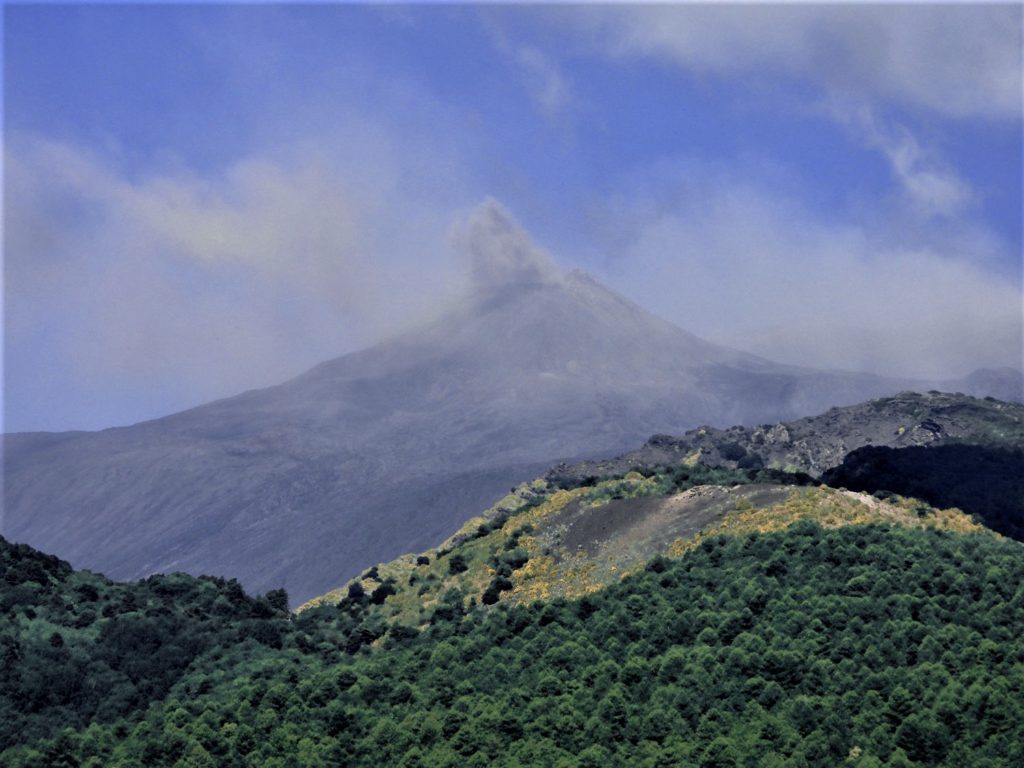 The photo was issued on the 14th of July on the route of Mareneve between Fornazzo and Rifugio Citelli and set the occasion of a large brown-haired bouquet featuring the strombolian activity of the new South-Eastern crater.

Volcanic Activity Summary:
Seismic activity at Great Sitkin Volcano has decreased to background levels over the past few weeks. There is no evidence of eruptive activity in geophysical data streams or in satellite observations. Thus, AVO is decreasing the Aviation Color Code to GREEN and Alert Level to NORMAL. 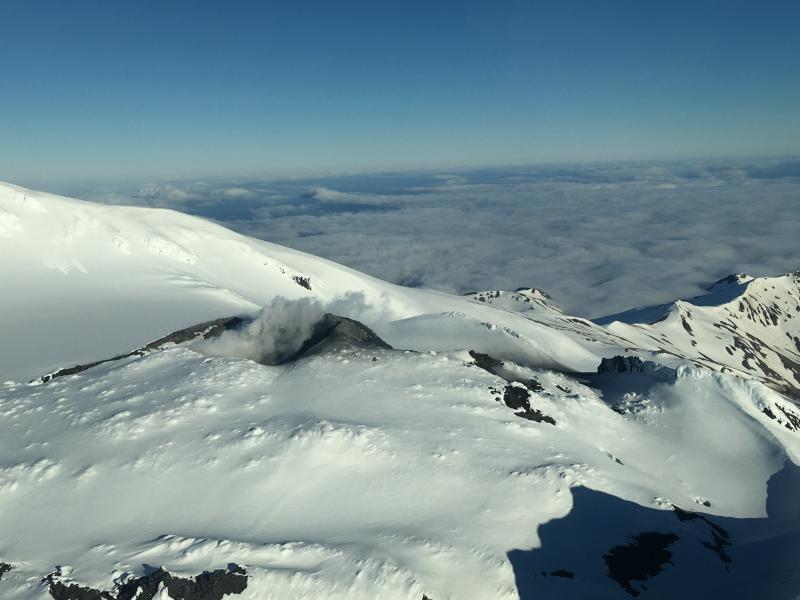 The analysis of the recordings obtained from the seismic network of the Sabancaya volcano for the period from 8 to 14 July 2019 has identified approximately 2396 volcanic earthquakes, the highest percentage being associated with the movement of magmatic fluids . During this week, an average of 22 medium to low explosions were recorded each day. 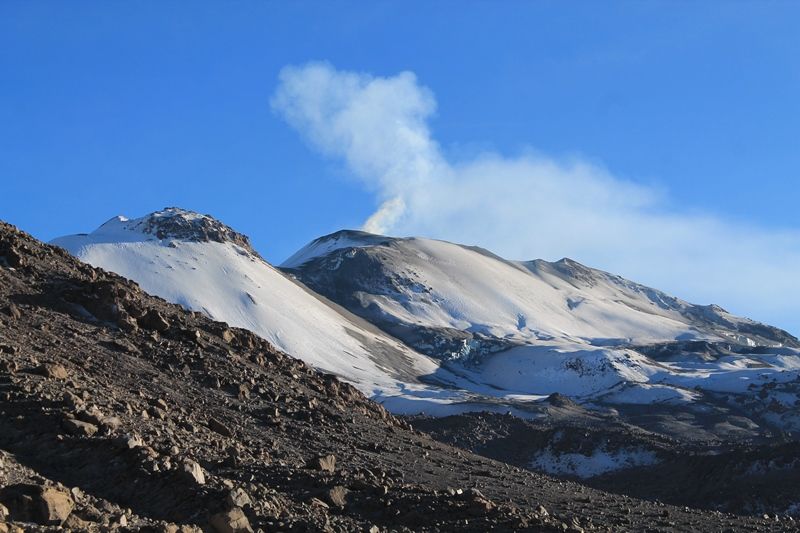 The monitoring of the deformation of the volcanic structure, using GNSS data (processed with fast orbits), presents no significant anomalies. Visual surveillance, using surveillance cameras, identified the appearance of columns of gas and ash up to 2.7 km high above the summit of the volcano, which were dispersed to the  sectors East , South-East and North-East of Sabancaya. Satellite monitoring identified 7 volcanic anomalies on the volcano between 6 and 35 MW, associated with the presence of a hot body near the surface and the persistence of explosions.

RECOMMENDATIONS
• Do not approach within 12 km of the crater.
In case of ash fall, cover your nose and mouth with damp cloths or masks.

Since yesterday and until this morning, the volcano was clearly visible until it was covered with fog. The smoke from the crater was white in color and 30 meters high. The wind was weak in the west, north-west, north-east, and east.

Through the seismographs, on July 15, 2019, it was recorded:
20 avalanche earthquakes
1 hybrid earthquake
1 distant tectonic earthquake

Recommendation:
Mount Merapi’s climbing activity is temporarily not recommended, except for investigation and research related to disaster mitigation efforts.
An area of radius 3 km around the summit must be emptied of activities of the population.

VONA:
The last VONA code received the GREEN color code, was released on June 3, 2018 at 8:39 pm WIB, due to the presence of a white smoke emission activity with a smoke column height of up to 3768 m above sea level or about 800 m above the summit. 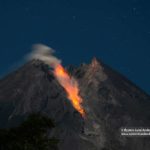 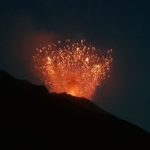