Hawaiian Volcano Observatory reports that an explosive eruption at Kilauea summit has occurred at about 3:45 AM. The resulting ash plume may affect the surrounding areas. The wind may carry the ash plume to the southwest toward Wood Valley, Pahala, Naalehu and Waiohinu.
The danger from this eruption is ash fallout. The major response is to protect yourself from fallout. 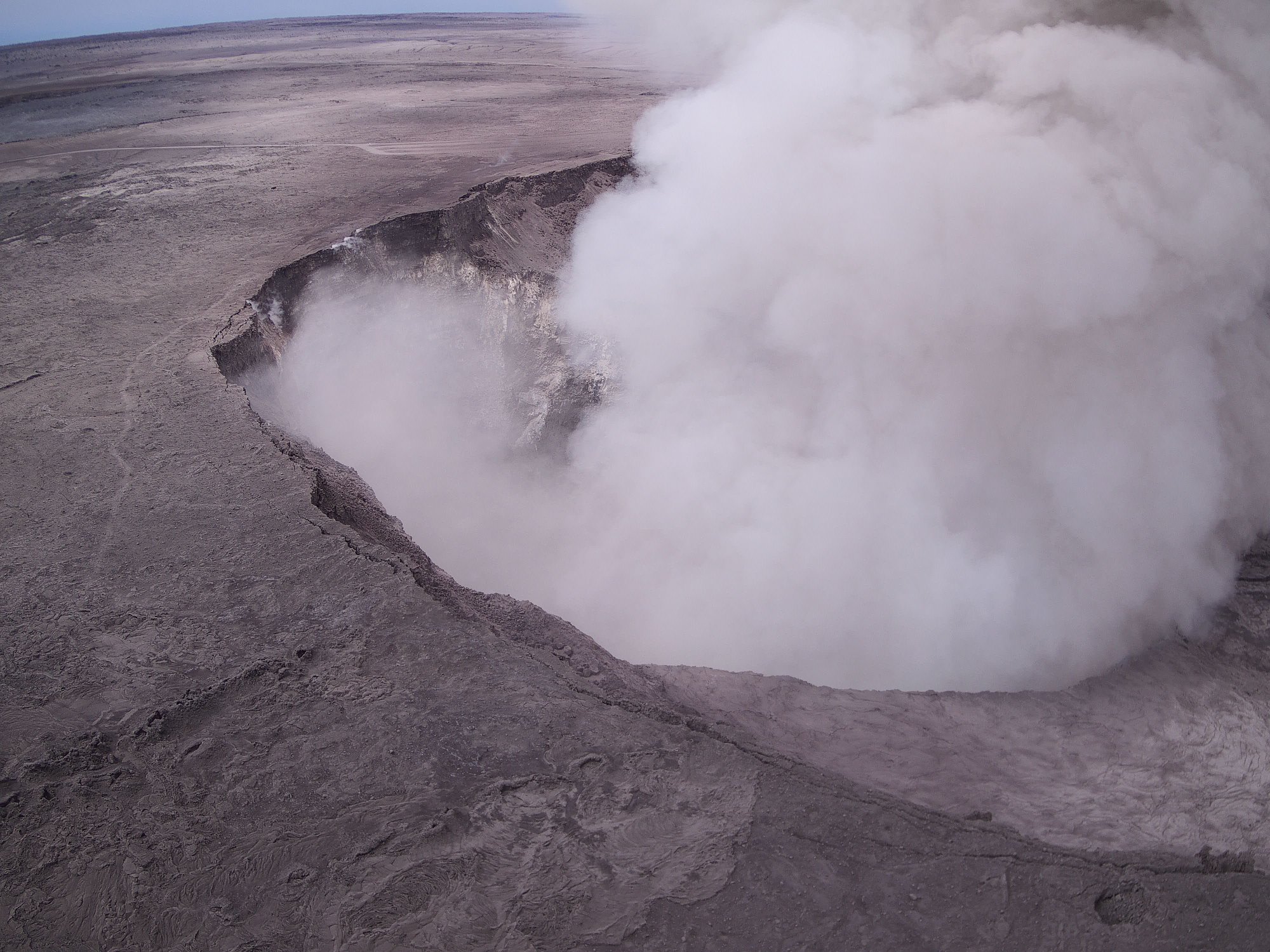 If you are at home, stay indoors with the windows closed. Turn on your radio and listen for updates from authorities.
If you are in your car, keep the windows closed. Ash fallout may cause poor driving conditions, due to limited visibility and slippery driving conditions. Drive with extreme caution, or pull over and park.
After the hazard has passed, do check your home, and especially your catchment system for any impact that may affect your water quality.

This is a Civil Defense Message for Tuesday, May 22 at 6:00 in the morning.
Hawaiian Volcano Observatory continues to monitor active flows. Fissure 6 reactivated last night and has been erupting since around midnight. The flows from Fissure 6 are slowly flowing closer to PGV property.
Due to this activity, the following policies are in effect:
At this time this situation will be closely monitored. There is no immediate threat to any of the wells at PGV.
Due to the laze hazard at the lava ocean entry stay out of the plume. 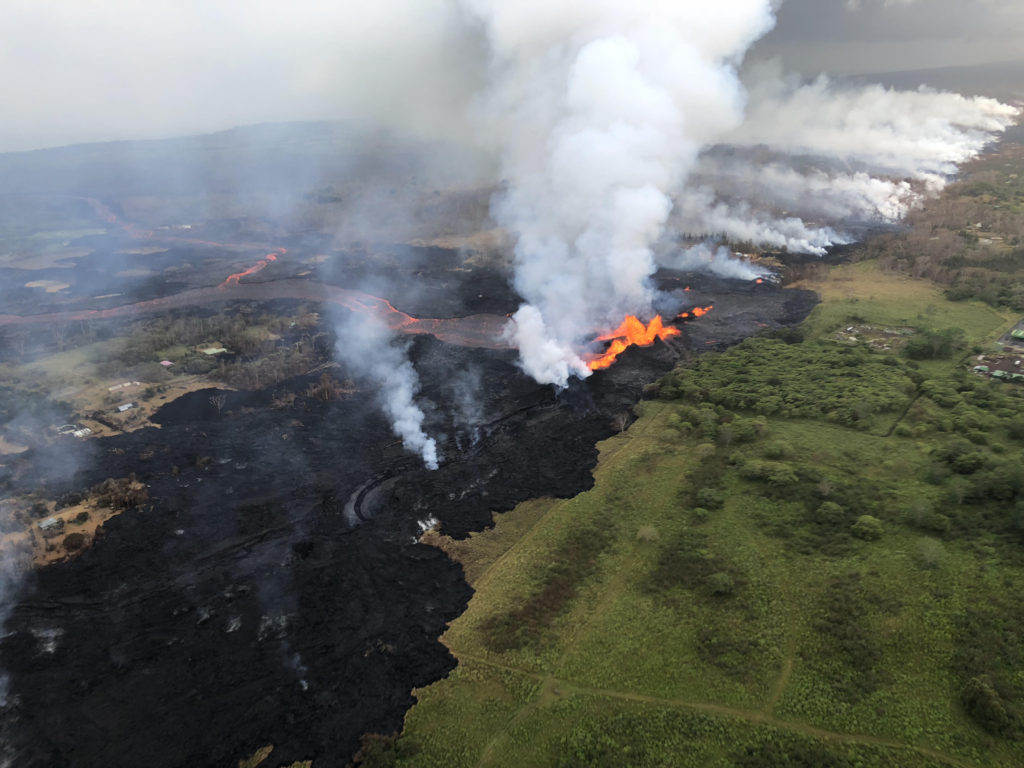 Aerial view of erupting fissure 22 and lava channels flowing southward from the fissure during an early morning overflight. View is toward the southwest. Photo courtesy of Volcano Helicopters.

Fissure 6 through 22 are erupting lava fountains. The fountains from Fissure 22 feed a single lava channel that reaches the coast just north of MacKenzie State Park. The actual point of entry has been shifting to the west today. Spattering continues from Fissures 5, 6, and 19 that fed a lava flow to the south that is now stalled and a smaller flow to the north along and south of Pohoiki Rd. Fissures 17 continue weak spattering.

A new area of fountaining started this afternoon along the fissure line between Kaupili and Mohala Streets near Fissure 23.

Volcanic gas emissions have tripled as a result of the voluminous eruptions from the erupting fissures so SO2 concentrations are likely elevated to higher levels throughout the area downwind of the vents. Moderate trade winds today means that areas downwind of Kilauea gas emission sources may experience varying levels of vog.
This eruption is still evolving and additional outbreaks of lava are possible. Ground deformation has slowed and seismicity levels have decreased in the area. 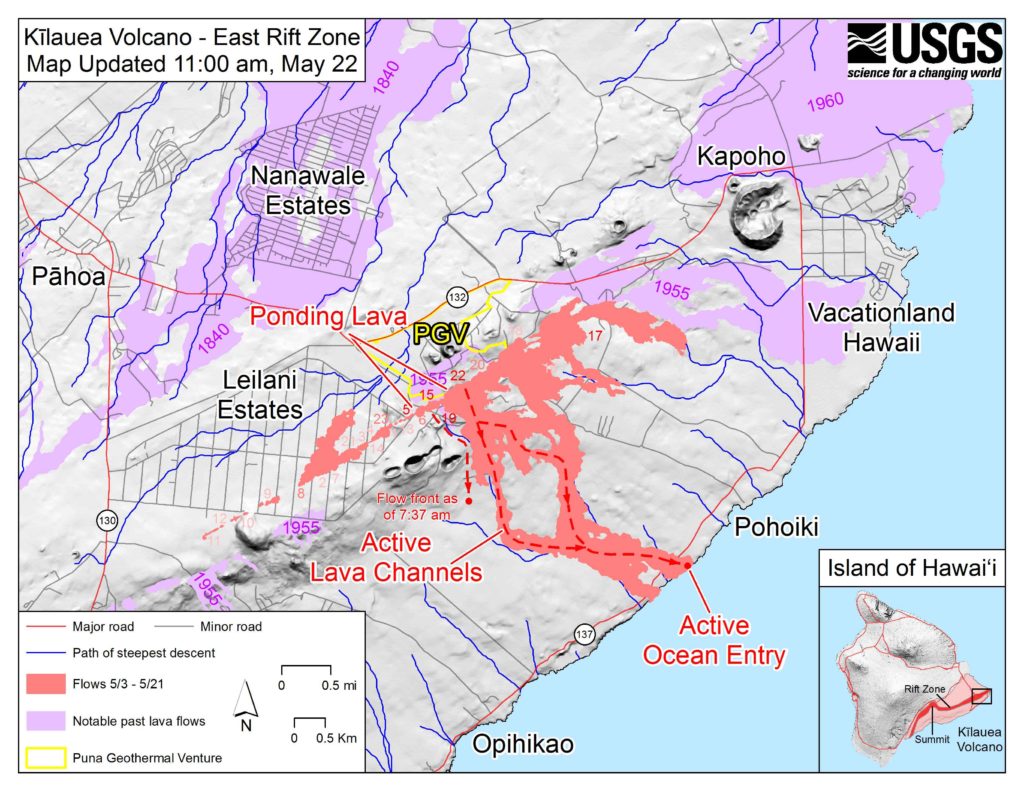 Map as of 11:00 a.m. HST, May 22. The flow field has not expanded significantly during the past day because most of erupted lava moved southward through the active lava channels and into the ocean. Note a new lava flow that was observed during this morning’s overflight west of the active channels (see label). There was a single ocean entry this morning. Shaded purple areas indicate lava flows erupted in 1840, 1955, 1960, and 2014-2015.

Conditions around the erupting fissures can change very quickly. Residents in lower Puna should remain informed and heed Hawaii County Civil Defense closures, warnings, and messages (http://www.hawaiicounty.gov/active-alerts).
The ocean entry is a hazardous area. Hazards include walking on uneven, glassy lava flow surfaces and around unstable, vertical sea cliffs. Venturing too close to an ocean entry on land or the ocean exposes you to flying debris from sudden explosive interaction between lava and water. Also, the lava delta is unstable because it is built on unconsolidated lava fragments and sand. This loose material can easily be eroded away by surf, causing the new land to become unsupported and slide into the sea. In several instances, such collapses have also incorporated parts of the older sea cliff. Additionally, the interaction of lava with the ocean creates « laze », a corrosive seawater plume laden with hydrochloric acid and fine volcanic particles that can irritate the skin, eyes, and lungs.

Multiple small eruptions of ash occurred over the past day, all ejecting ash to under 10,000 ft above sea level. Additional explosions possible at any time.
Seismic levels, which abruptly decreased after the recent explosive eruptions, are again slowly increasing.

At this time, based on HVO web cameras, a robust plume of gas and steam is billowing out of the Overlook vent and drifting generally southwest.
At any time, activity may again become more explosive, increasing the intensity of ash production and producing ballistic projectiles very near the vent. Communities downwind should be prepared for ashfall as long as this activity continues.

USGS/HVO continues to monitor the situation at the Kilauea summit and the lower East Rift Zone 24/7 in coordination with Hawaii County Civil Defense and other emergency authorities. HVO geologists are onsite in the area this morning conducting overflights, examining the fissure vent activity for significant changes, and searching for any signs of new or resumed activity.

052218 12:00noon County of Hawaii Civil Defense:
A message from COUNTY OF HAWAII
This is a Civil Defense Message for Tuesday, May 22 at noon.

Hawaiian Volcano Observatory continues to monitor highly active vents and lava flows. Fissure 20 is feeding one flow entering the ocean, while other fissures are supplying additional flows. Sulfur dioxide emissions remain high, causing elevated levels in areas downwind of the vents.
The explosive eruption that occurred at 3:45 this morning at the Kilauea summit resulted in an ash plume that reached a height of 8,000 feet. Ash has been reported in communities downwind of Kilauea. Take action to avoid exposure to ash.
Fissures near Puna Geothermal Venture are active and producing lava slowly flowing onto the property. This activity has destroyed the former Hawaii Geothermal Project site area adjacent to PGV.

Following the activity of VOLCANS CHILES and CERRO NEGRO, the COLOMBIAN GEOLOGICAL SERVICE (SGC) reports that:
For the period from May 15 to 21, 2018, seismic activity recorded energy and occurrence levels slightly lower than those reported the previous week, maintaining the predominance of seismicity associated with rock fracturing at the same time. interior of the volcanic building. Most of these events are located south and southwest of the Chiles volcano, with epicentral distances of less than 6 km, to a depth of 12 km below the volcanic peak (reference level at 4700 meters), and quantities up to M1,3 on the Richter scale. The occurrence, on May 18, of a low-energy fracturing seismicity (maximum magnitude of 0.8 on the Richter scale), located towards the west flank of the Chiles volcanic building, at epicentral distances not exceeding 2.5 km, is highlighted with depths of nearly 4 km.

Sporadic recording of seismicity associated with fluid motions within the volcanic system continues, although no surface manifestations have been observed so far.

The eruption started on April 27, 2018 at 23:50 local time continues. The intensity of the volcanic tremor (indicator of eruptive intensity at the surface) continues to decrease gradually.
– The rare episodes of good weather this day have seen from the webcams of the OVPF and the OVPF / IRT a low activity at the two eruptive mouths.
The upstream vent no longer appears active while the main cone emits only a few surface projections.
No active flow could be observed on the surface, most of the activity taking place in lava tunnels. 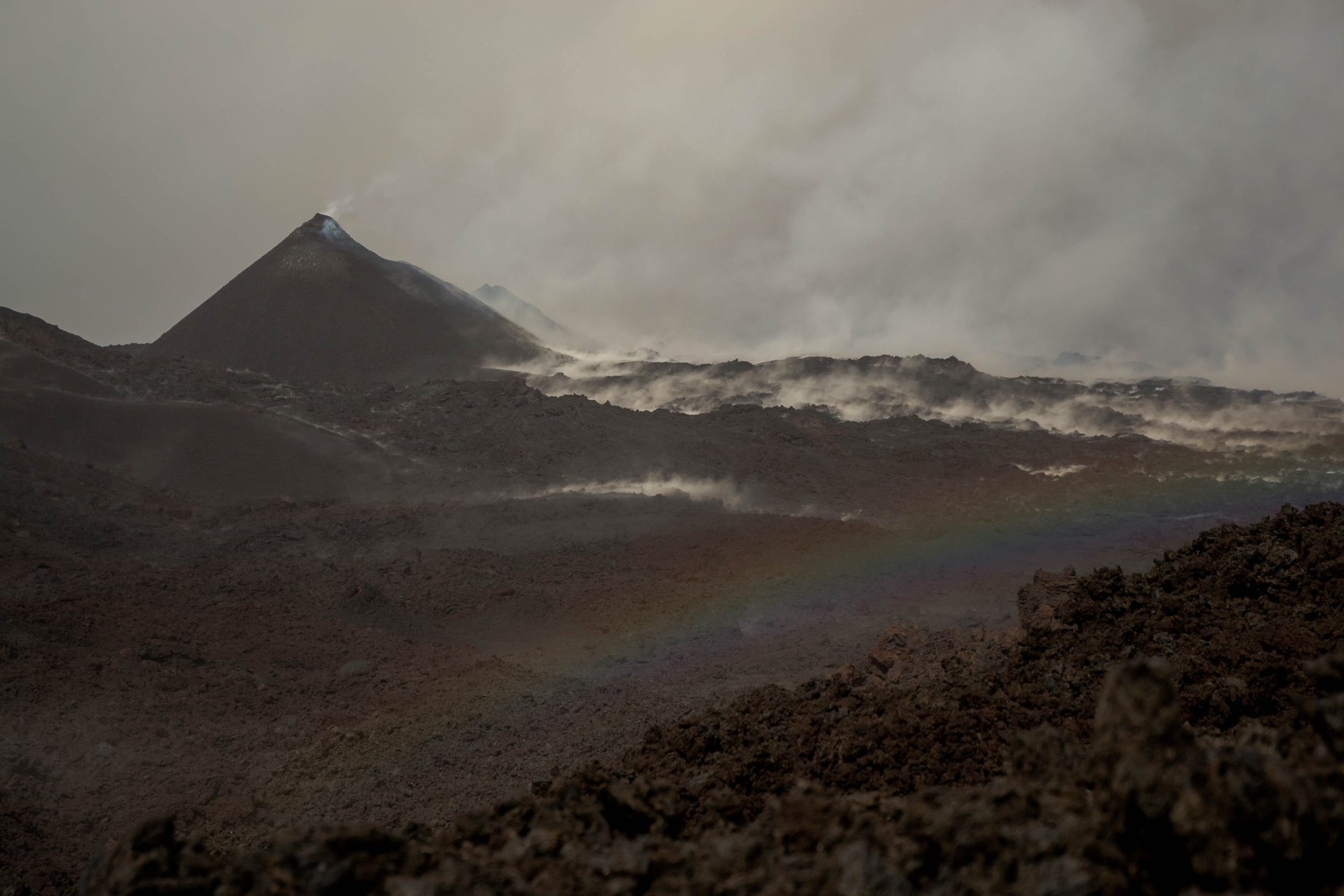 – Surface discharges could not be estimated from satellite data in the last 24 hours due to cloud cover on the volcano.
– The inflation of the building continues.
– No volcano-tectonic earthquake recorded during the last 24 hours under the Piton de la Fournaise building

Activity Level atLevel II  (WASPADA).
Since yesterday until this morning, the volcano can be observed clearly until it is covered with fog. Emission smoke was observed white, low pressure and strong intensity with a height of 25 m above the peak. The wind is blowing weakly in the West and Southwest. There was 1 eruption at 3500 meters high with a gray smoke color. 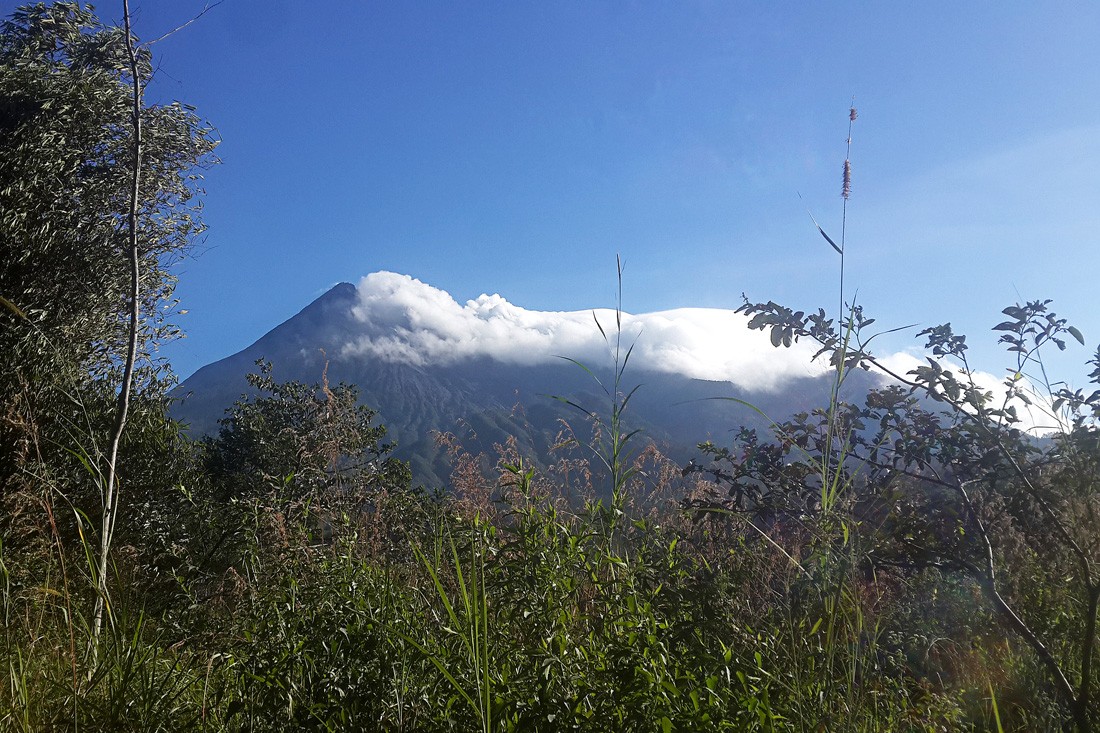 According to the seismograph on May 22, 2018, it was recorded:
1 earthquake of eruption.
2 avalanche earthquakes.
1 hybrid earthquake.
3 emission earthquakes
1 distant tectonic earthquake.
The eruption occurred on May 23, 2018 at 3:31 pm with a column height of ash at about 2000 m above the summit. Recorded duration of the eruption earthquake: 4 minutes.

Recommendations:
Climbing activities are temporarily not recommended, except for the benefit of investigation and research related to disaster mitigation efforts.
A limited access radius of 3 km around the summit is set up.
If there is a significant change in the activity of the Merapi volcano, then the activity status of Mount Merapi will be examined immediately.

VONA:
It was issued the color code ORANGE, published on May 23, 2018 at 4:28 WIB, related eruption with the height of the eruption column at 4968 m above sea level or about 2000 m above the Mountain peak. Wind southwest. 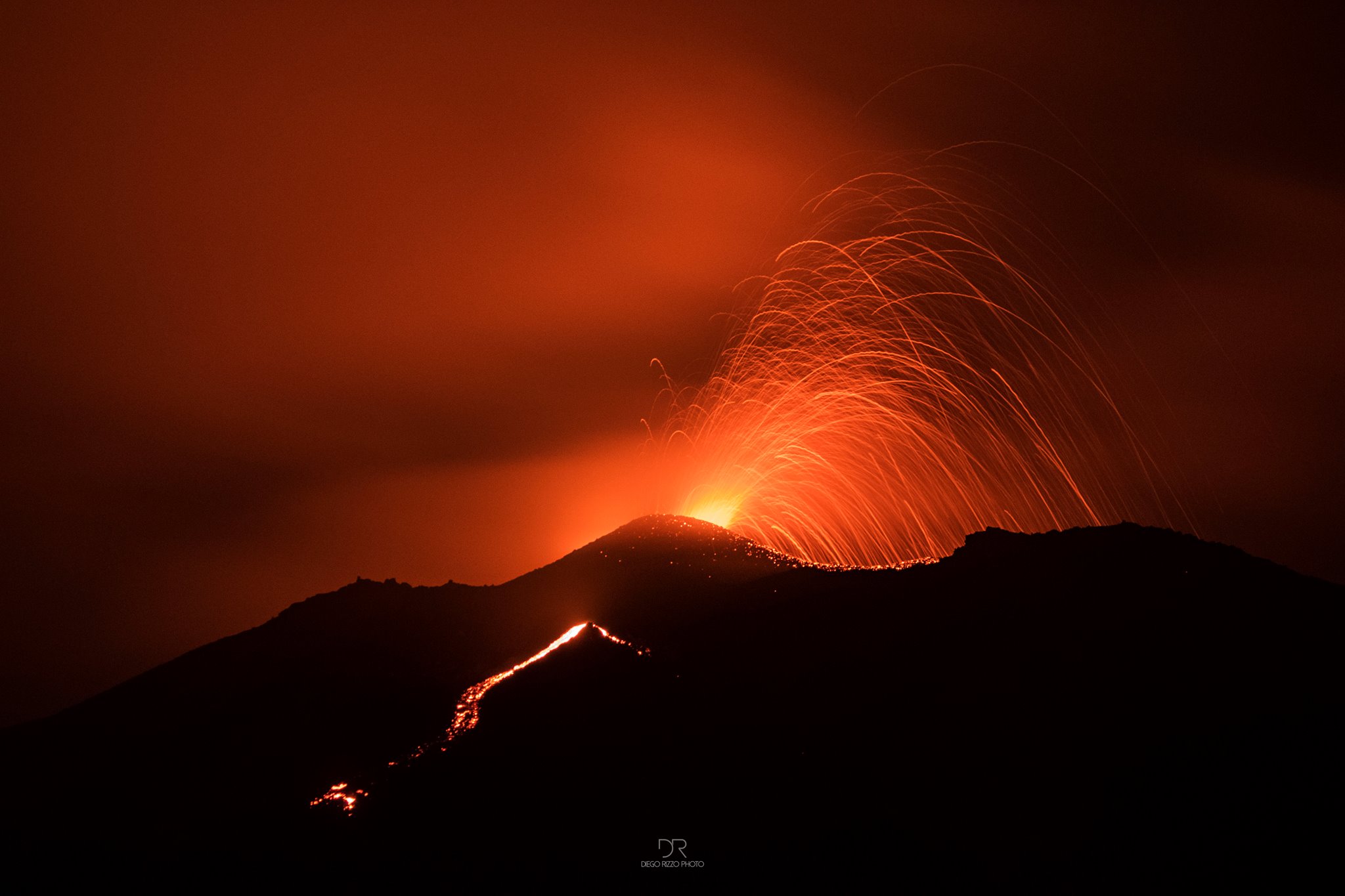 Activity:
Presence of white and blue degassing at a height of about 400 m above the crater scattered northwest. The PCG station records tremors due to the rise of magma and gases. Some strombolian explosions are recorded that reach 50 to 100 meters above sea level. 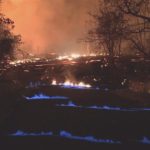