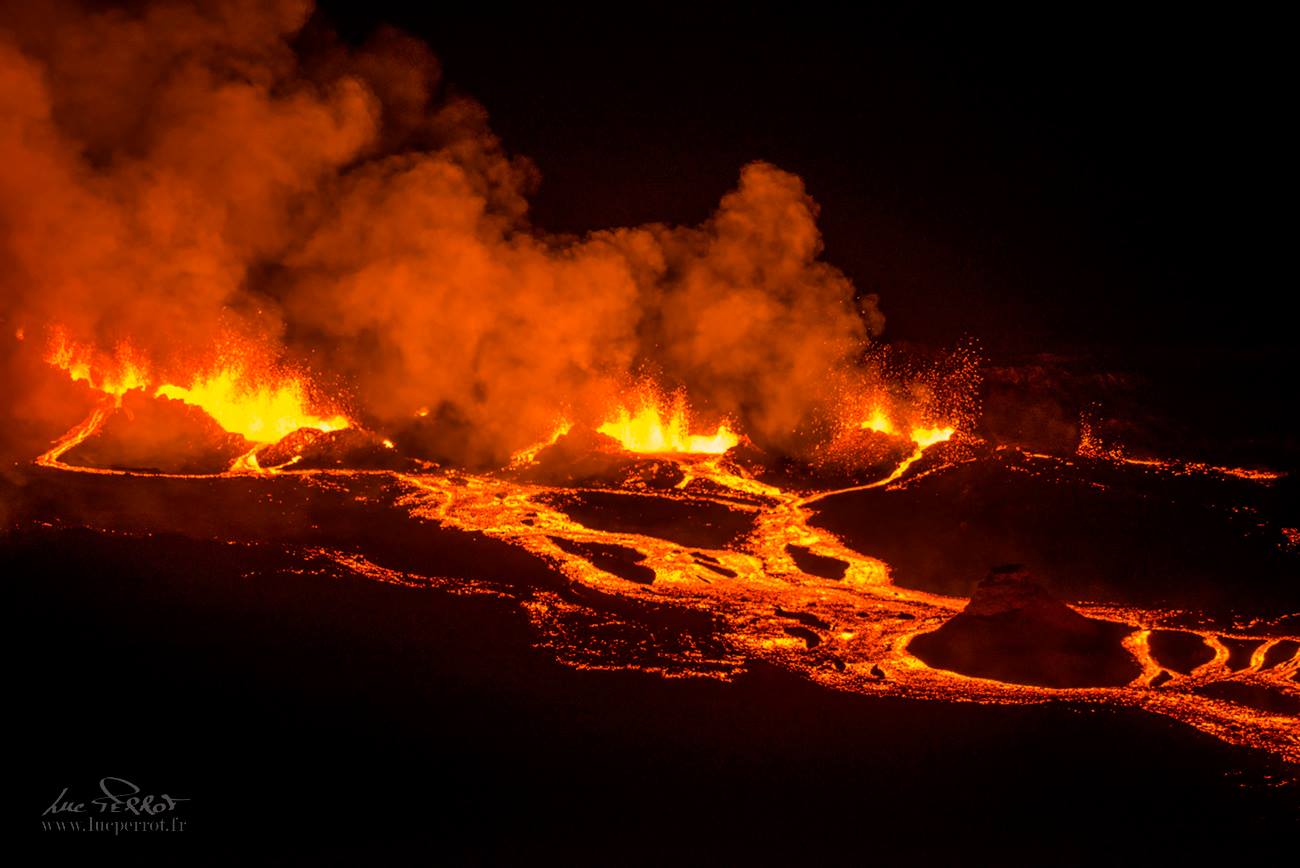 The second eruption of the year, the second in less than a month, which began on the night of Friday to Saturday, continues. Nevertheless, the intensity of the eruptive tremor – indicator of eruptive intensity on the surface – has steadily decreased since the arrival of magma in the open air, Saturday around 0:15.
By its duration of several hours, the seismic crisis that preceded this eruption could be reminiscent of that of the eruption of April 3, occurred near the Nez Coupé de Sainte-Rose, more than three kilometers from the summit of the Piton de la Fournaise . But Saturday’s eruption began just over one kilometer from the summit area. If the magma took so long to make its final rise to the surface in this case, it is because the pressure was insufficient, explains the volcanological observatory. 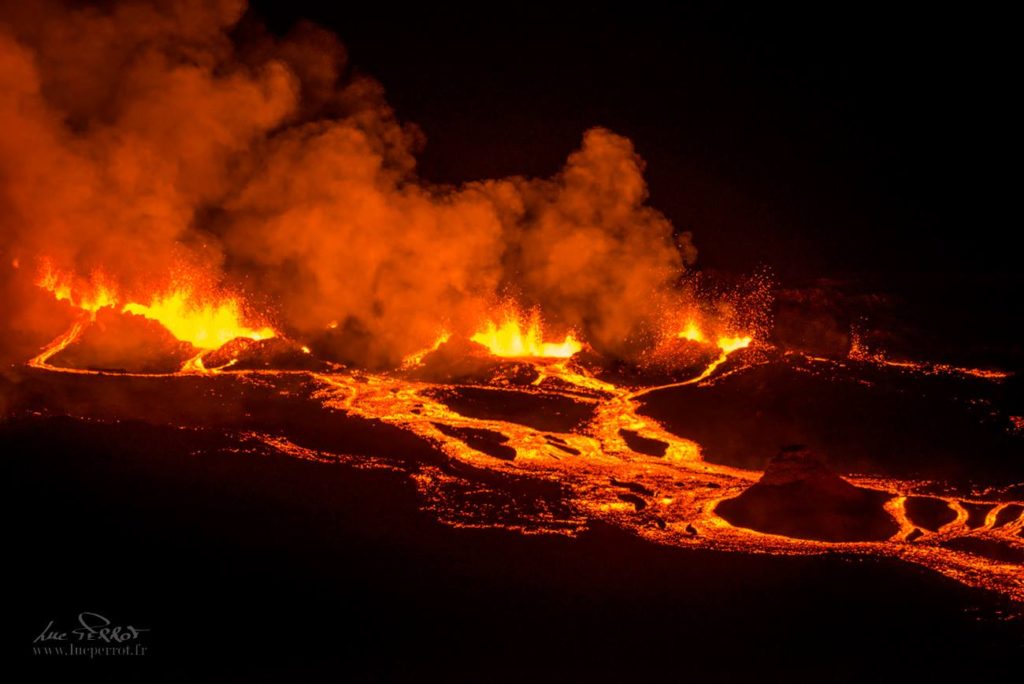 In fact, although several fissures opened in the crater area Rivals (eruption of 1937), only one remained more than a few hours: the others had already died in the early morning. On the main crack, about 300 meters long, several mouths were inactive early in the morning as well, upstream and downstream.
The crater Rivals, which was rushing lava in the night, as if suddenly resuscitated after more than 80 years of sleep, had just been partially disemboweled by the top of the crack, giving the impression of to be a source of lava. He did not delay him either to extinguish himself. The bets are open on the longevity of this eruption, but know that it is impossible to deliver a prognosis, the scientists – and especially them – refusing also to risk it, rashes not paying mine in their beginnings having sometimes surpassed other eruptions started with fanfare.

Activity Summary:
Eruptions continue at Kīlauea Volcano’s summit and East Rift Zone. The summit lava lake has not overflowed the Overlook crater rim in the past 24 hours. Summit tiltmeters continued to record a deflationary signal. Tiltmeters and GPS at Puʻu ʻŌʻō cone remain in the elevated inflationary state of the past several weeks, and the Episode 61g lava flow remains active within two kilometers (~1.2 miles) of the vent. There is currently no active lava on the pali, the coastal plain, or entering the ocean. The flow does not pose a threat to nearby communities at this time. 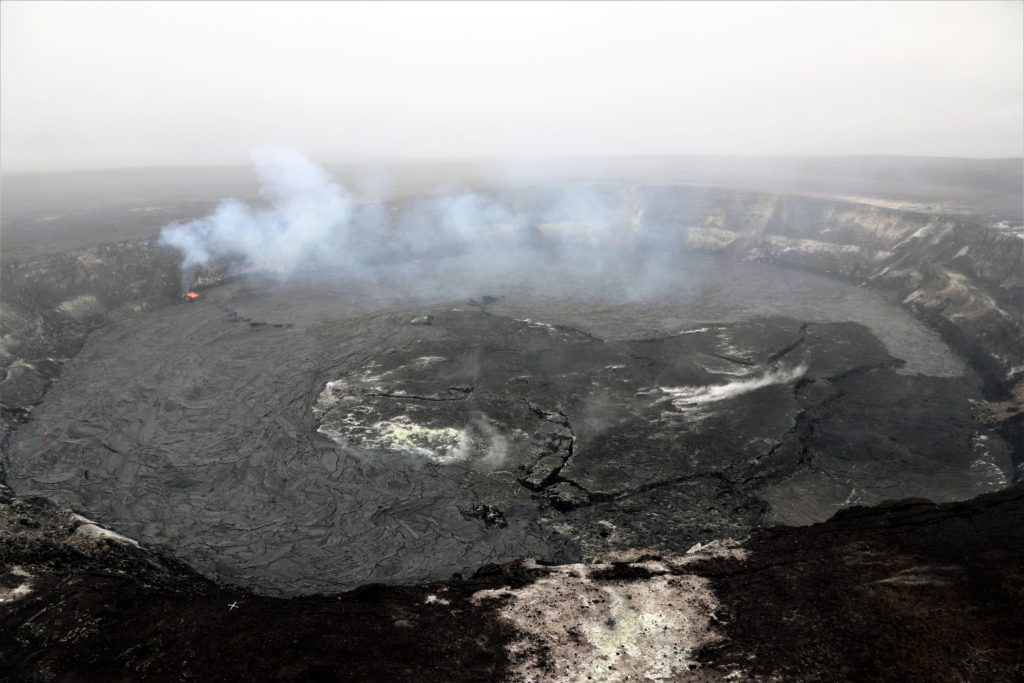 At approximately 6:15 a.m. today (April 26) a new overflow began on Halema‘uma‘u crater floor. The lava lake overflow continued until about 10:30 a.m. and covered about 36 hectares (90 acres) of the crater floor with lava (approximately 2/3). This is the largest overflow since the summit eruption began in 2008. This photo is looking south, and the gas plume is being produced by the lava lake in the southeast crater floor (upper left).

Summit Observations:
The lava lake has dropped 16 meters (yards) over the past 24 hours and is estimated from webcam views to be 16 m (52.5 feet) below the new elevated rim of the lava lake. Summit tiltmeters continued to record a deflationary trend over the past day. Tremor amplitude is fluctuating with lava lake spattering and seismometers have recorded a few small earthquakes in the upper East Rift Zone and south part of the caldera. Elevated summit sulfur dioxide emission rates persist. 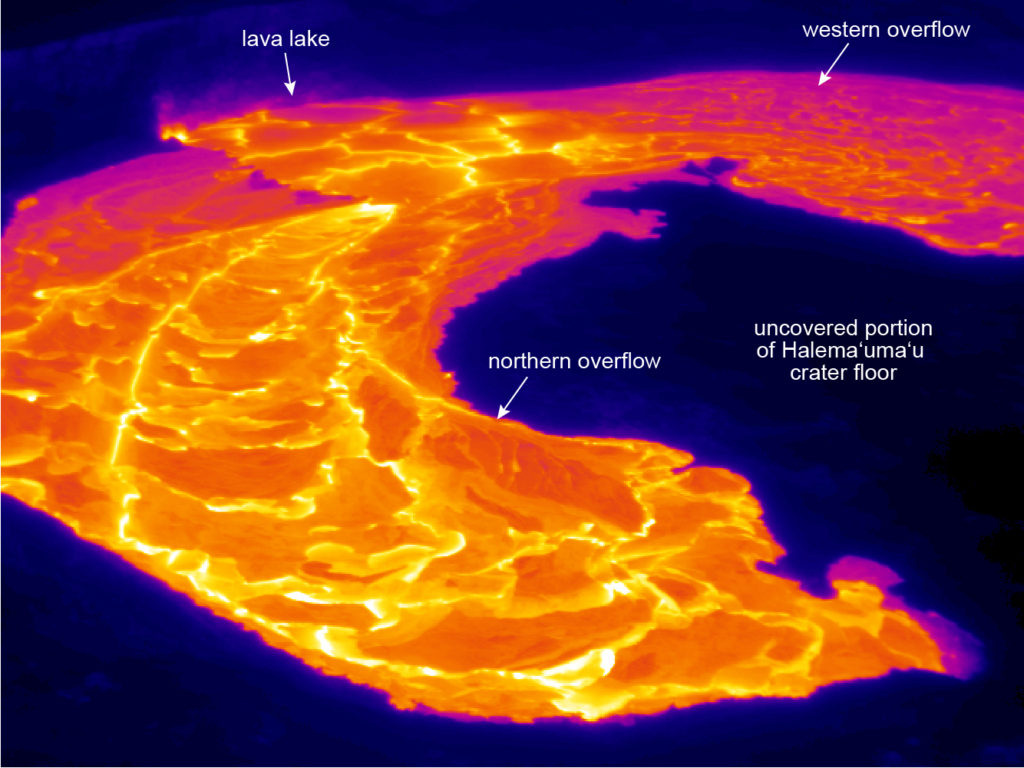 This thermal image (looking south) shows the active overflows from the lava lake (upper left) onto the Halema‘uma‘u crater floor. View is toward the south.

Puʻu ʻŌʻō Observations:
Overall inflationary tilt recorded by a tiltmeter at Puʻu ʻŌʻō, has remained flat over the past 24 hours. The cone remains in an elevated inflationary state and the crater floor continues to uplift. Webcam views are limited by weather this morning, but overnight showed no new flows in the crater. Seismicity has not changed significantly. The sulfur dioxide emission rate from the East Rift Zone vents is currently lower than over the past several months and remains significantly lower than the summit emission rate. 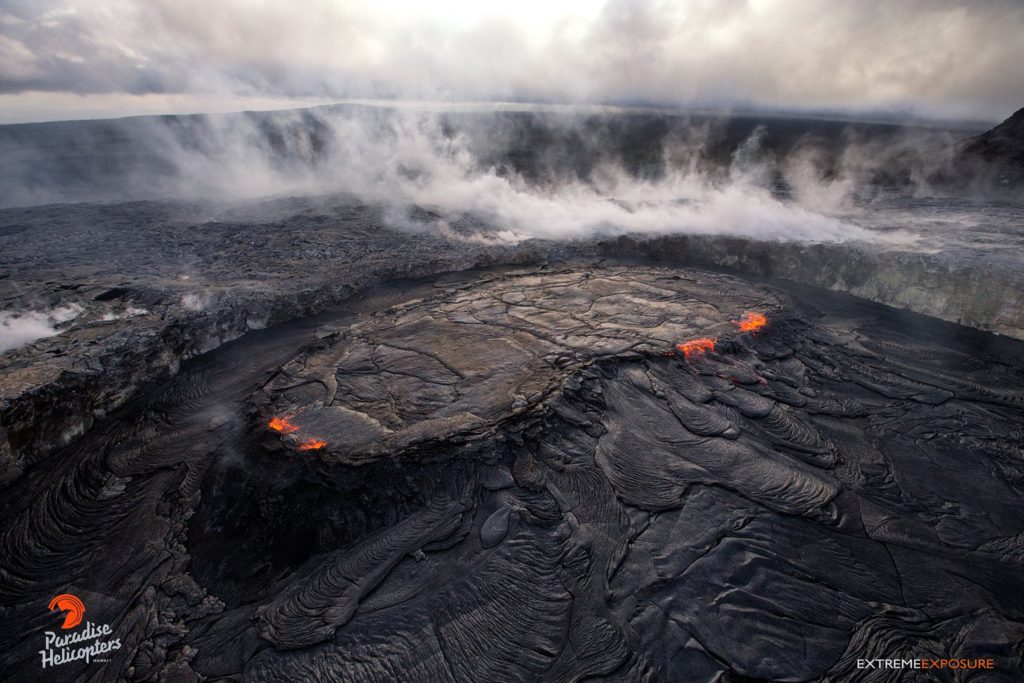 April 25, 2018, 6:00 am – Kilauea and east rift zone: The lava lake within Pu‘u ‘O‘o’s west pit, has formed a well defined perched pond, and its surface is now approximately the same elevation as the top of the west wall. The pit’s floor has risen as well, from overflows of the pond, as can be seen in this photo. 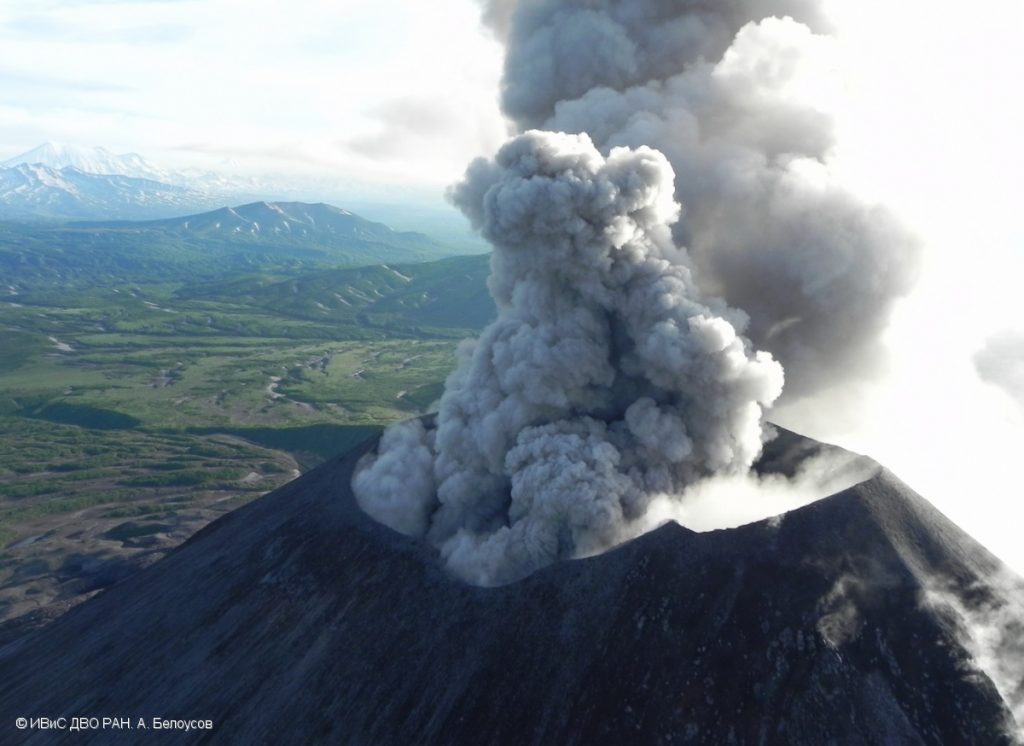 Volcanic Activity Summary:
According to satellite data, a moderate explosive activity of Karymsky volcano renew from about 06:25 UTC on April 28. Ash explosions sent ash up to 5.5 km a.s.l., ash plume drifted about 150 km to the north-east from the volcano.

In the last 48 hours, the PCG seismic station has recorded an increase in internal trenches, this being the product of the constant rise of the magma. OVPAC reports at that moment a flow of lava that descends from the crack of the eruption of 2010 with an approximate length of 500 meters towards the Northwest, towards the crater of Cerro Chino. 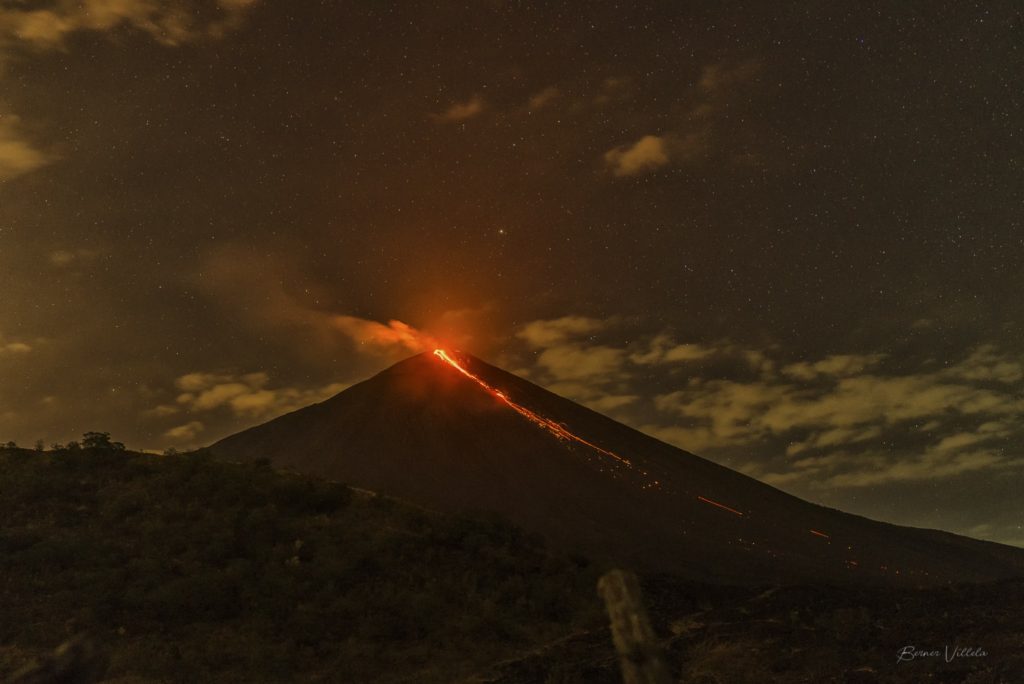 This activity was generated by the accumulation of material and the formation of a cone that constantly generates incandescent pulses reaching heights up to 50 meters, which is why a large part of the crater has been filled. The number of explosions has decreased to about 2 to 4 per hour and are classified as weak explosions, usually of Strombolian type, so that there is no information on the movement of ashes.

Due to the eruptive characteristics of the Pacaya, the possibility of generating new lava flows in the following hours in the crater or in the cracks of the cone is not excluded.
Due to this activity, it is recommended not to stay in areas close to the cone, as avalanches of larger blocks may occur and not allow the crater to climb, since the current activity can generate explosions and falls of materials of different sizes, on greater height and distance.

The world’s largest active geyser has erupted for the third time in less than six weeks.
Steamboat Geyser, in Yellowstone National Park, erupted at around 6.30am local time on Friday morning, geologists said.
The eruption is the latest event in a rare period of activity at the geyser this year, following similar water discharges on March 15 and April 19 this year.

Before this year, Steamboat had not erupted since September 2014.

The US Geological Survey said all events so far in 2018 had been smaller than recent major activity observed in 2013 and 2014. 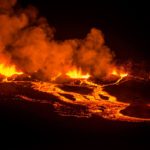 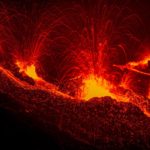