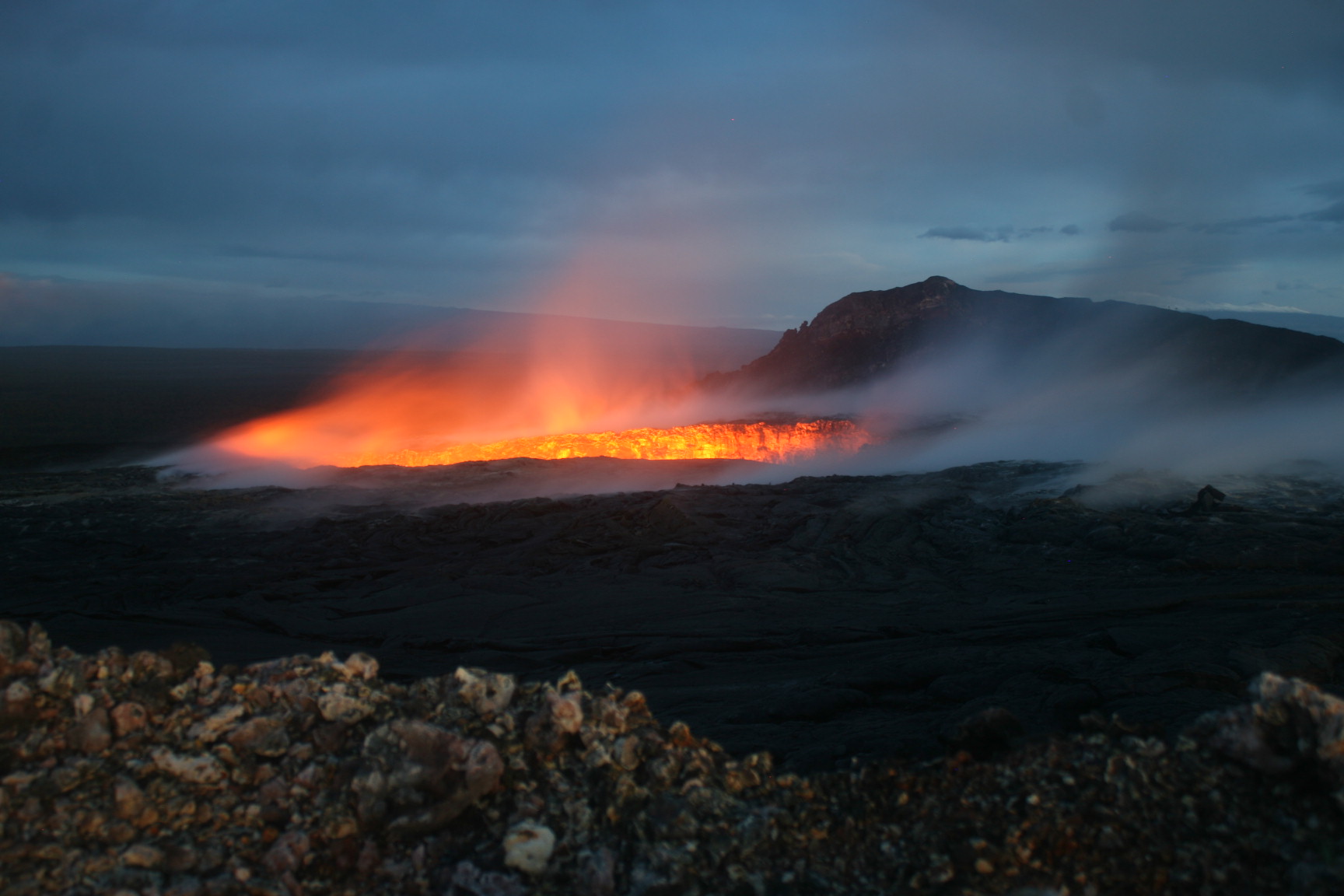 Mayon’s condition for the past 24 hours was characterized by a short lull that was followed by lava collapses, generally quiet degassing, weak lava fountaining and effusion and degassing from the summit crater. Between 7:23 AM and 2:02 PM yesterday, five (5) episodes of lava-collapse pyroclastic density currents (PDC) were visually observed on the Miisi, Basud and Bonga-Buyuan Gullies within 4-5 kilometers of the summit crater. Sporadic activity at the summit resumed at 2:56 PM and generated ash plumes 100-500 meters above the summit that drifted to the southwest. In the evening, lava effusion from the vent was observed to continue feeding lava flows that have maintained fronts at 3.3 kilometers, 4.5 kilometers and 900 meters on the Miisi, Bonga and Basud Gullies, respectively, from the summit crater. 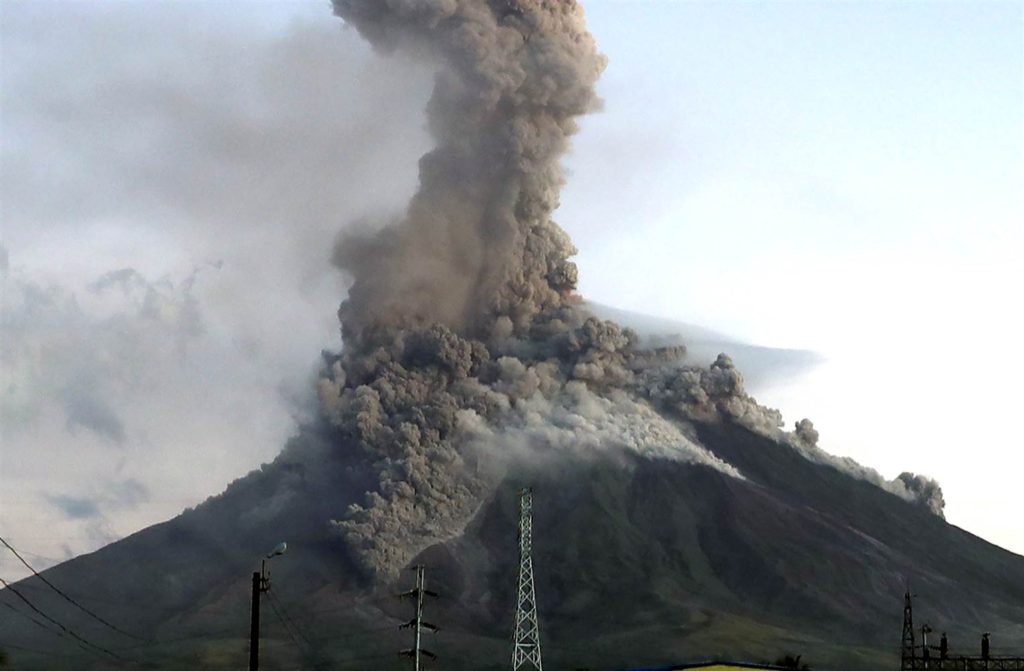 A total of one hundred twenty-three (123) volcanic earthquakes and two (2) rockfall events were recorded by Mayon’s seismic monitoring network. Sulfur dioxide (SO2) emission was measured at an average of 2070 tonnes/day on 23 February 2018. Deflation of the lower slopes that began on 20 February was recorded by electronic tilt, consistent with the transition to quiet lava effusion at the summit crater, a brief lull and resumption of sporadic fountaining. Nonetheless, overall electronic tilt and continuous GPS data indicate that the edifice is still swollen or inflated relative to November and October 2017, consistent with campaign Precise Leveling data acquired this week.

Subject: Bulletin of activity of the Nevado del Ruiz volcano.
The level of activity continues in: Yellow activity level or (III): changes in the behavior of volcanic activity.

During the last week, the various monitoring parameters show that the Nevado del Ruiz volcano continues to display unstable behavior.
The seismicity caused by the fracturing of the rocks that make up the volcano showed a slight increase in the number of events and released seismic energy, compared to the previous week. The earthquakes are located mainly in the north-eastern part of the volcanic structure and dispersed in the northern, south-eastern and southwestern areas of the volcanic structure as well as in the Arenas crater at depths between 1.0 and 7.6 km. The maximum magnitude recorded during the week was 1.5 ML (Local Magnitude) for the 14 February earthquake at 17:12 local time, located 2.8 km northeast of the Arenas crater, at a depth of 3.0 km.

Regarding seismicity related to fluid dynamics in volcanic ducts, it showed a slight increase in the number of earthquakes and released seismic energy, compared to the previous week. This type of activity is mainly characterized by the occurrence of multiple fluidic earthquakes, long period type and very long periods, as well as tremor pulses. These earthquakes were located mainly in the Arenas crater and in the southern sector of the volcano.

Volcanic deformation measured from electronic inclinometers, Global Navigation Satellite System (GNSS) stations and radar images shows stability behavior without recording significant deformation processes of the volcanic structure. The volcano continues to emit water vapor and gases into the atmosphere, including sulfur dioxide (SO2), as evidenced by the values ​​obtained by the SCANDOAS stations installed on the volcano and the analysis of images satellites. In the follow-up of the information provided by the portals MIROVA and NASA FIRMS, a thermal anomaly has been reported by the latter in the vicinity of the crater Arenas.

The column of gas and steam reached a maximum height of 950 m measured on the summit of the volcano, on February 13th. The direction of the dispersion of the column was governed by the direction of the wind in the zone, which during the week prevailed towards the South-East and North-East with respect to the crater Arenas.

Activity Summary:
Kīlauea Volcano’s summit and East Rift Zone eruptions continue with no significant changes. Episode 61g lava flow activity persists on the upper portion of the flow field and on Pulama pali. Lava is not entering the ocean at this time. These lava flows pose no threat to nearby communities. The summit lava lake is about 36 m (118 ft.) below the floor of Halemaʻumaʻu. Low rates of ground deformation and seismicity continue across the volcano. 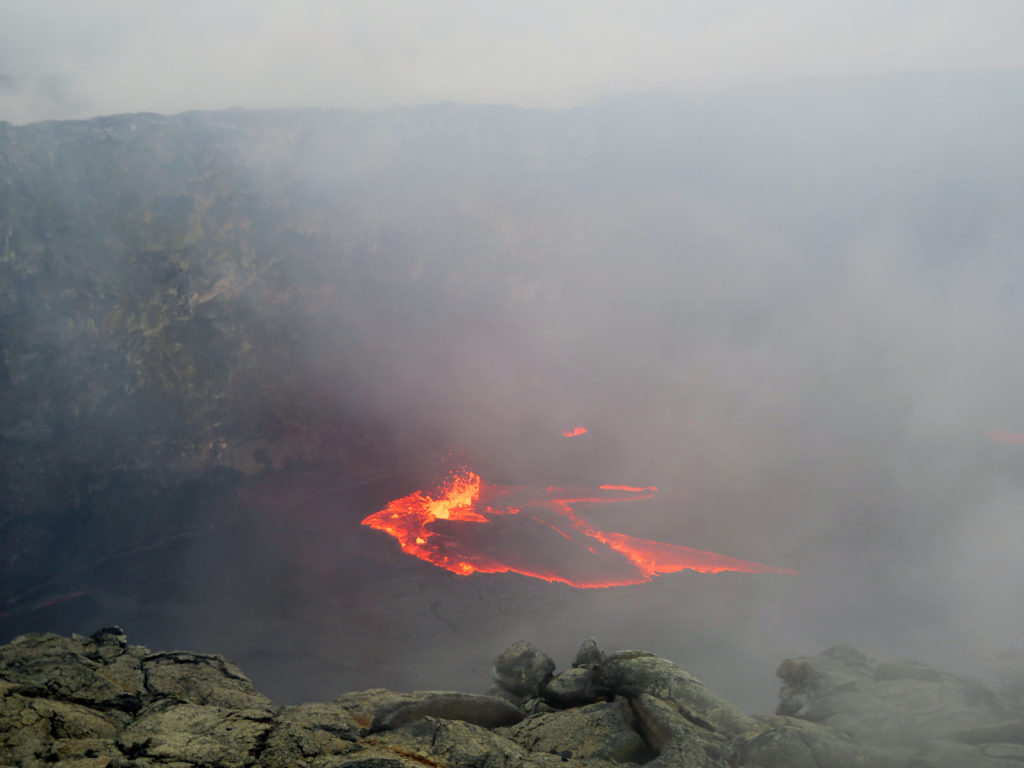 A telephoto image of the spattering lava pond contained within the west pit at Pu‘u ‘Ō‘ō. Wind-blown gas and steam reduced visibility.

Summit Observations:
The height of the lava lake at Kīlauea’s summit was measured this morning at about 36 m (118 ft.) below the rim of the Overlook crater. A small veneer collapse (rock fall) into the lava lake occurred just after 7:00 AM  this morning and was visible in lava lake webcam images. After recording deflationary tilt for most of the day, summit tiltmeters began showing inflationary tilt starting at about 2:00 AM  this morning.  Minor inflationary tilt continued to be recorded by summit tiltmeters , consistent with the inflation phase . Seismicity is within normal, background rates with tremor fluctuations associated with lava lake spattering. Summit sulfur dioxide emission rates remain high. 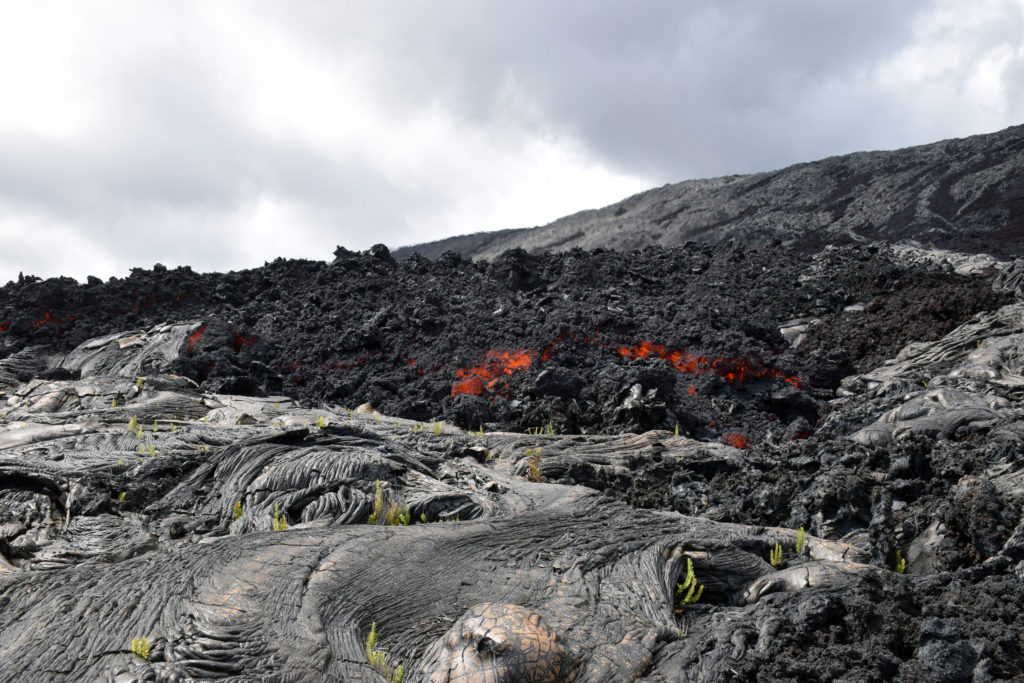 The front of the furthest ‘a‘ā flow downslope, exposing the molten core in places as the rubble is pushed forward. 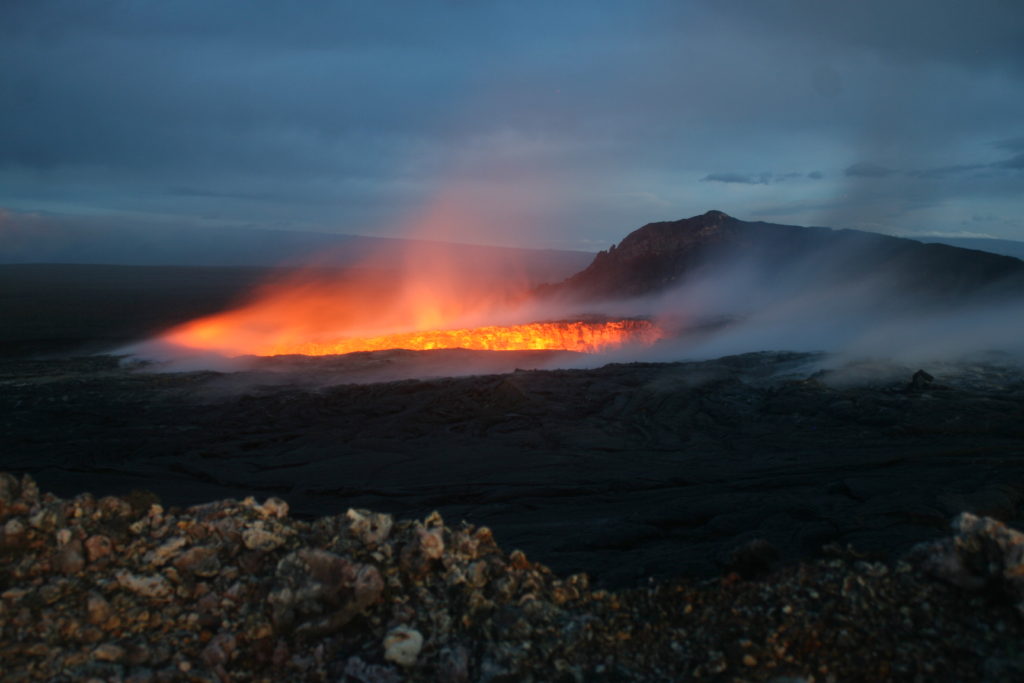 This west pit time-lapse image was taken on February 19 at 6:20 am showing changes in the area since January 31 . On February 10 at 8:21 am (exact time based on seismic data) a large portion of the northeastern rim of the west pit (right side of glowing pit), collapsed. Prior to and during the rim collapse, the adjacent ground also subsided.

Lava Flow Observations:
The episode 61g flow is still active, but no lava is flowing into the ocean. Webcams views show continuing surface flow activity on the upper portion of the flow field and on Pulama pali. None of these flows poses any threat to nearby communities at this time. 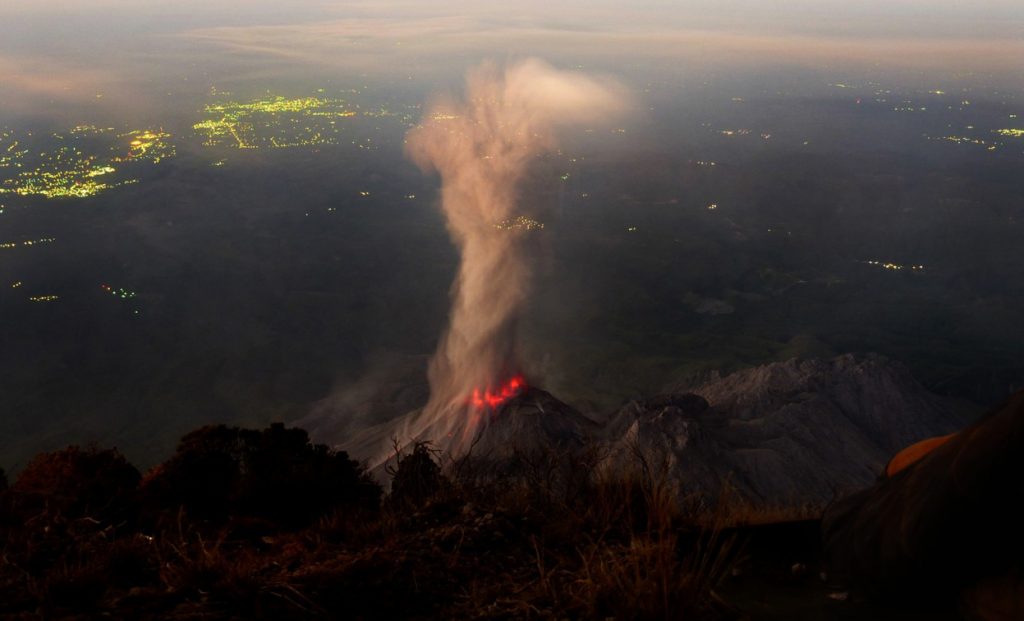 Activity:
Presence of a white degassing at 2900 m of altitude which disperses towards the South-West. STG3 Seismic Station records 8 low to moderate explosions during the night and early morning that emit white ash columns at 3100 m (10170 feet) with a southwesterly dispersal direction. Ash falls fall back into the volcanic perimeter. Low and moderate constant avalanches descend to the southeast flank.

Since yesterday until this morning visually the peak of the volcano can be observed until it is covered with fog. Ash explosions are observed of white / gray color, thick with an altitude of 300 to 600 m above the peak, which are scattered towards the South-West. 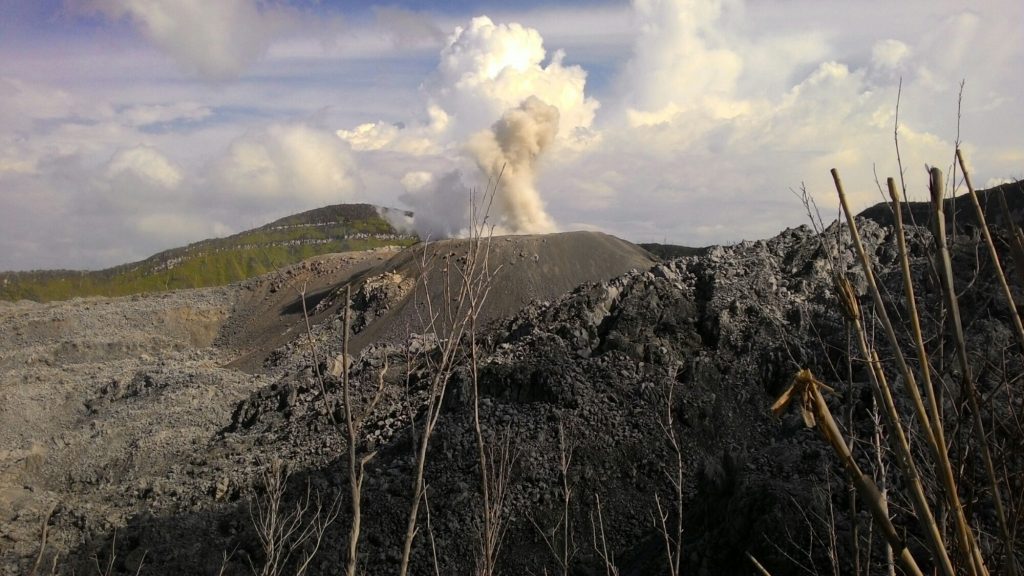 Recommendations:
The communities around G. Ibu and visitors / tourists should not have activity, climb and approach within a radius of 2 km, with a sectoral expansion of 3.5 km towards the opening in the northern part of the active crater of G. Ibu. 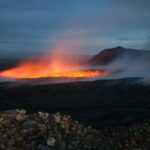 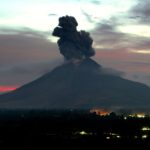