The eruption started on September 19, 2022 around 07:48 local time continues. After almost 3 days of decrease, the amplitude of the eruptive tremor (indicator of surface lava emission) gradually increased again during last night. Its level stabilized during the day at around 20% of its initial amplitude (Figure 1). 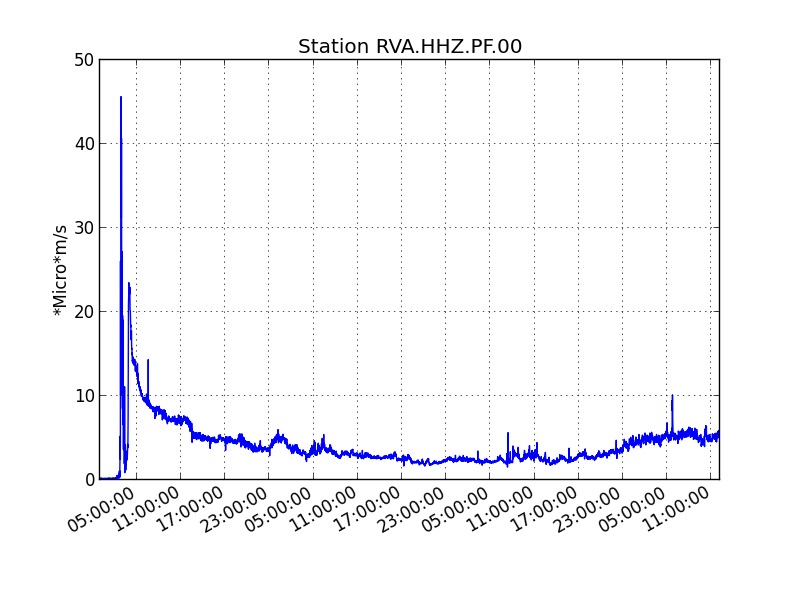 The seismicity under the summit zone remains very low with 1 single volcano-tectonic earthquake recorded over the last 24 hours.
Thanks to an improvement in weather conditions for a few hours yesterday afternoon, a team from the observatory was able to go to the eruptive site with the support of the Air Force Section of the Gendarmerie and the Gendarmerie Platoon of Haute Mountain. This intervention allowed:
– to confirm the precise location of the eruptive vent,
– to take a sample of lava in the flow near the vent,
– to take a sample of older projections,
– to evaluate the lava flow at about 3 m3/s. 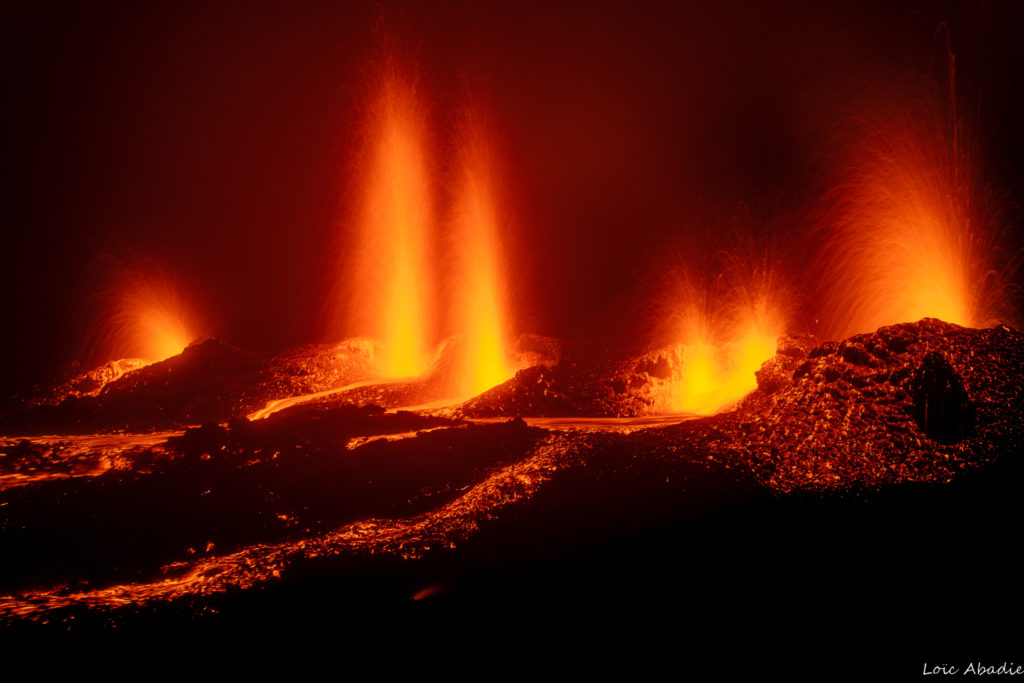 Estimates of lava flow have been established by satellite method on the HOTVOLC platform (OPGC – Clermont Auvergne University), during yesterday afternoon (peaks at 2.5 m3 / sec), as well as this morning at the favor of short thinnings (peak at 3.6 m3/s).
At the end of the day yesterday, the images from the OVPF-IPGP webcams showed a very marked decrease in activity focused on the lowest part of the crack system which opened on Monday.

Due to the very bad weather conditions on the Massif de la Fournaise today:
– no on-site reconnaissance could be carried out by the OVPF-IPGP teams, whether on foot or by air.

In the light of the surveillance data, it is highlighted:
1) Temperature of the crater fumaroles: Along the upper edge, temperatures remain stable at high values.
2) CO2 flux in the crater area: The CO2 flux in the crater area shows a slight decrease, still remaining on medium-high values.
3) SO2 flux in the crater area: stable SO2 flux at a moderately medium-high level
4) Geochemistry of fumarolic gases: There are no updates.
5) CO2 fluxes at the base of the La Fossa cone and in the Vulcano Porto area: Stable CO2 flux values ​​above the background noise of the Rimessa site; slightly lower but still abnormal values ​​on the Camping Sicilia site; high mean values ​​at the Palizzi site (P4max); on the Faraglione site, the values ​​recorded are stable and close to the background level. 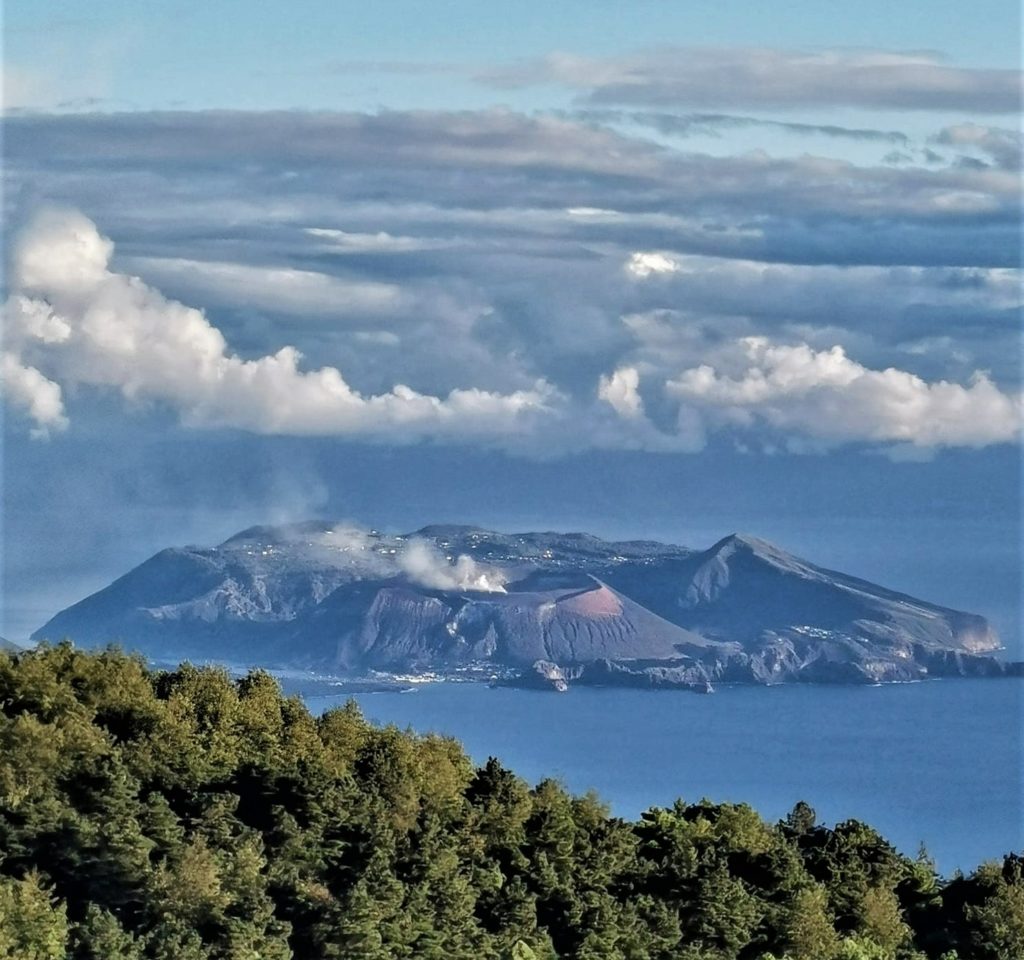 6) Geochemistry of thermal aquifers: temperature values ​​still high and conductivity values ​​stable but at medium-low levels in the well of Camping Sicilia; in the Bambara well the level values ​​show a further decrease, while the conductivity values ​​show an increasing trend.
7) Local seismicity: Low occurrence rate of local micro-seismicity.
8) Regional seismicity: No earthquake with Ml >= 1.0 was located in the Vulcano region last week.
9) Deformations – GNSS: The network of permanent GNSS stations has not recorded any significant changes.
10) Deformations – Inclinometry: The inclinometric network does not record any significant variations.
11) Gravimetry: There are no data available.
12) Other Notes: Mobile GNSS. The GNSS mobile network acquires and transmits movements in real time at a frequency of 1 Hz. The time series acquired so far do not show significant variations around the Porto di Levante area.

CRATER FUMEROLES TEMPERATURE:
Along the upper edge, the maximum emission temperature has very stable values ​​with a weekly average of 373°C (range of values ​​recorded on an hourly basis: 357-377°C). The fumarolic field has equivalent emission temperatures along the entire summit fracture line, confirming a thermal anomaly still maintained by a constant vapor flux. The sensor on the inner side requires maintenance. On September 17, the station at the crater rim stopped working due to a battery problem; in the next few days a special maintenance intervention will be organized to solve the breakdown and restore the proper functioning of the station. 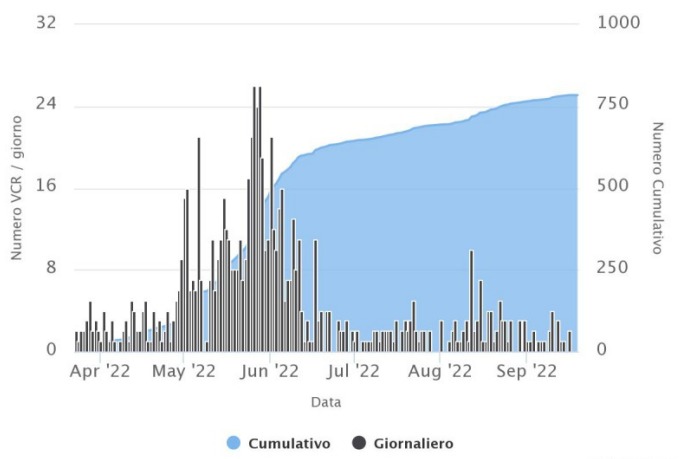 Daily frequency and cumulative number of micro-shocks (maximum frequency between 1 and 30 Hz) which characterize the local seismicity of Vulcano during the last 180 days.

LOCAL SEISMICITY:
During the week under review, the micro-seismicity related to hydrothermal fluid dynamics, as a whole, is generally low. In particular, the number of microshocks with a spectral peak greater than 1 Hz is on average comparable to that observed the previous week, while the downward trend in the rate of occurrence of events of lower frequency has continued ( VLP; spectral peak below 1 Hz; Fig. 9.2), already observed in the previous weeks.

For the period evaluated, between September 13 and 19, 2022 and compared to the previous weeks, the seismicity continues with a decrease in both the occurrence and the energy released, in particular associated with rock fracture processes. . The earthquakes were located mainly on the southeast side of the Chiles volcanic edifice, at epicentral distances of up to 14 km, with depths less than 12 km from its summit (reference level at 4700 m) and magnitudes not exceeding 1.6. All these seismic manifestations are part of a process of ground deformation (observed instrumentally) which began at the end of March 2022 and continues to this day. 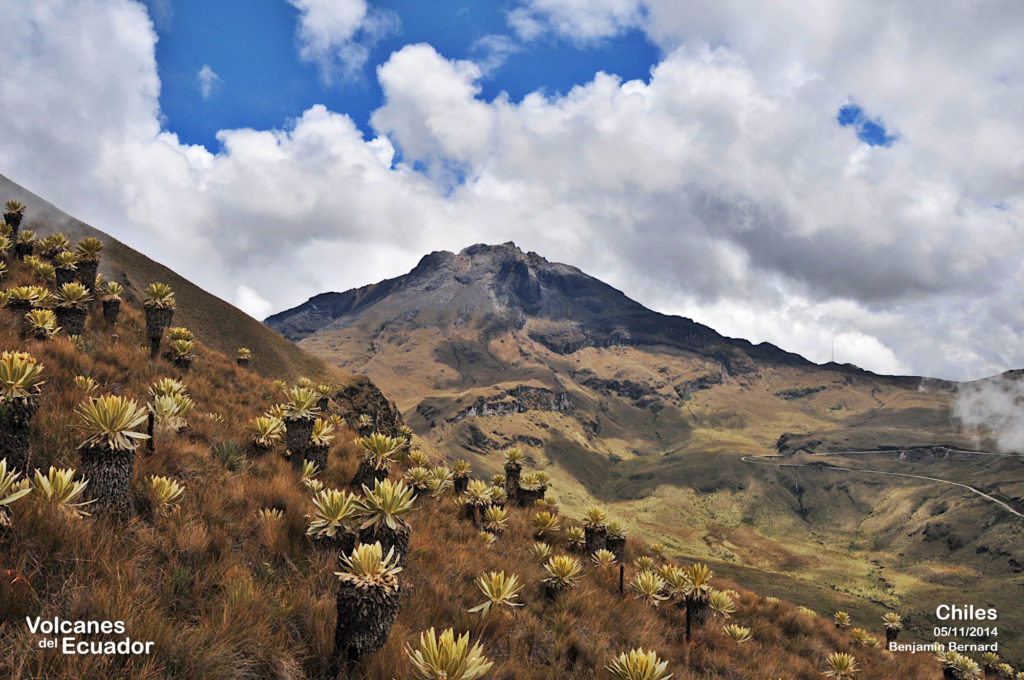 Based on the current behavior of this seismicity and what has been historically recorded in this active volcanic region, the possibility of the occurrence of more high-energy earthquakes, which can be felt by the inhabitants of the area of volcanic influence, is not excluded. 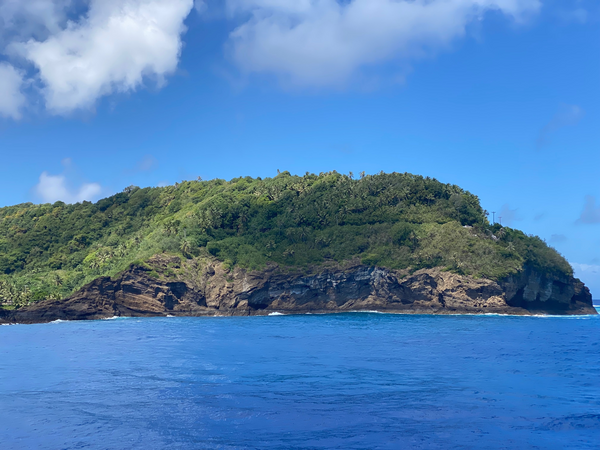 On the northwest coast of Ta‘ū Island (near Faleāsao village), half of a tuff cone, which is likely thousands of years old, is visible. Ocean waves have eroded away the other half of the tuff cone, which formed when hot magma interacted with either shallow groundwater or sea water.

The National Earthquake Information Center (NEIC) will soon start publishing preliminary locations of the largest earthquakes that have occurred during this period of seismic unrest in American Samoa. However, in the Manuʻa Islands the earthquake locations and depths are currently best-estimates, with large uncertainties resulting from the monitoring network being constrained to the east-west orientation of the islands in American Samoa. Thus, a dot should be viewed as an indication that an earthquake occurred, but it does not provide a precise location. 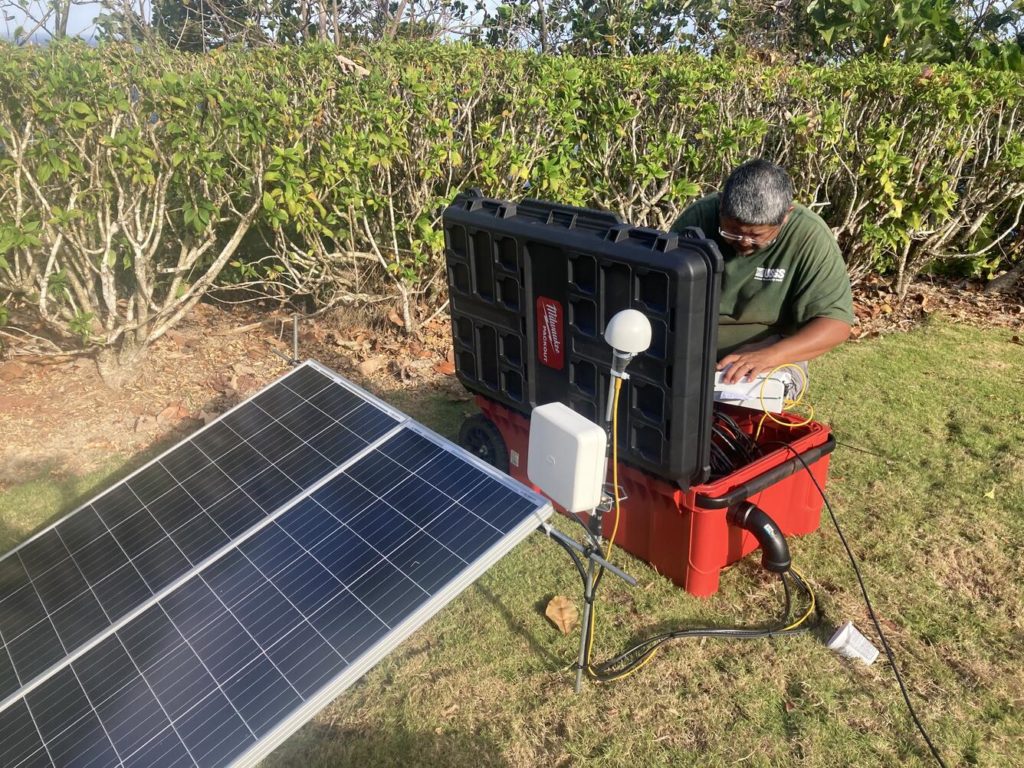 Department of Civil Protection and Emergency Management have announced an Uncertainty level for the ongoing seismic activity north of Iceland on September 9. 2022. 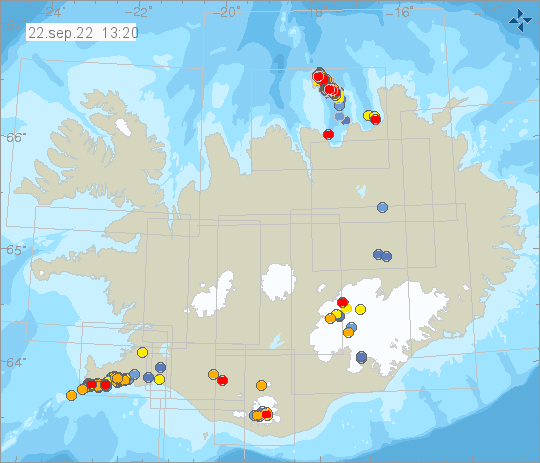 Week overview 12 September – 18 September
Around 6700 earthquakes were measured this last week by the automatic SIL seismic network, of which about 870 earthquakes have been manually located. There is a slight decrease in the seismicity from the previous week. The swarm near Grímsey is still ongoing but the intencity has decreased the last days. The largest earthquake detected was a M4.2 on the 12th of September at 01:05. 13 earthquakes over M3 have been detected east of Grímsey. Two minor earthquakes where detected in Hekla. 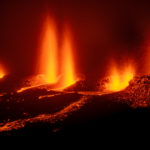