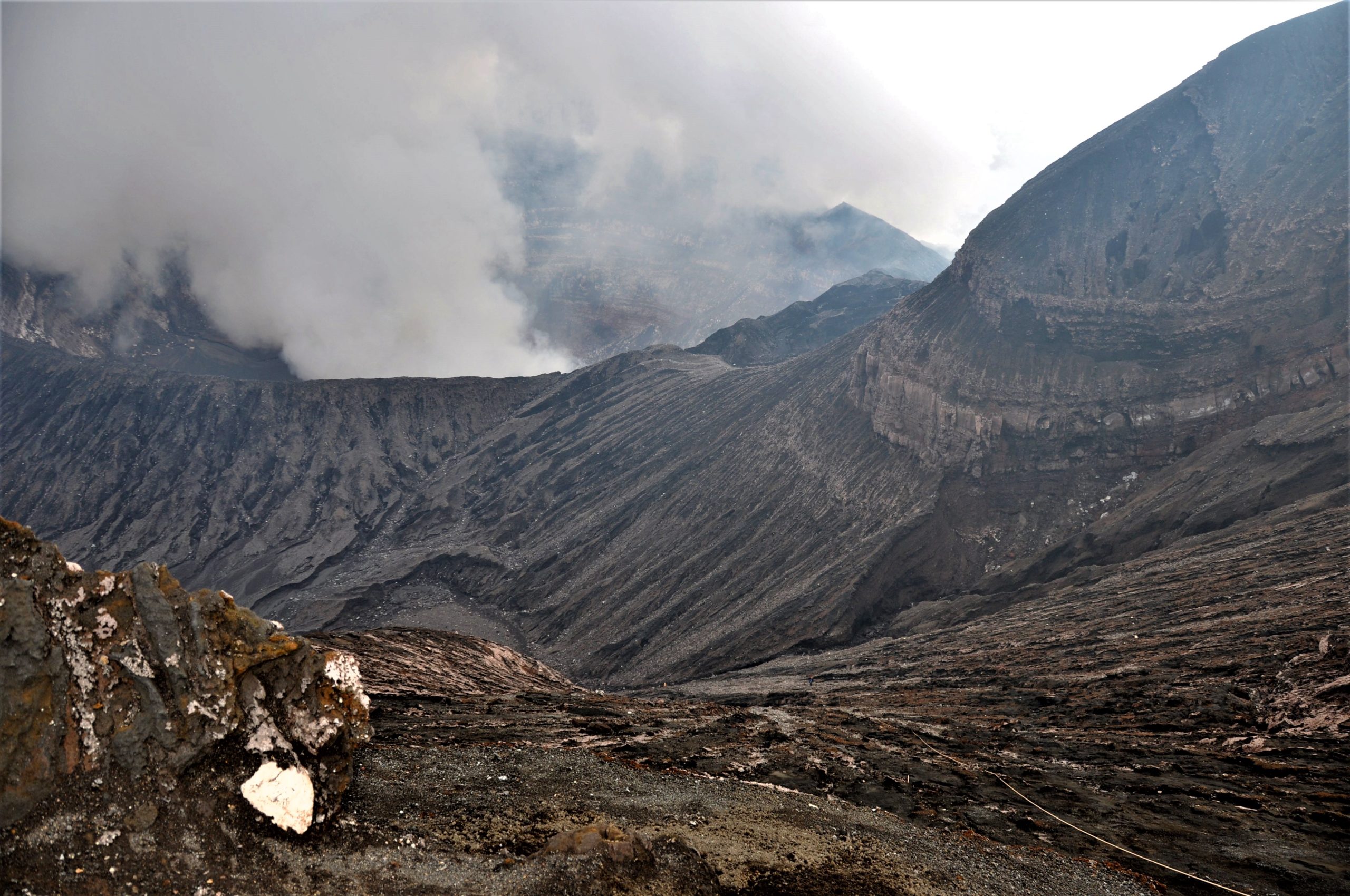 Ambrym volcano, specifically Benbow crater, is glowing again. After the increase in activity yesterday, the volcano glow was observed again by people on Ambrym and the surrounding islands. This glow has been missing since the eruption on December 2018 which saw the famous lava lakes of Benbow and Marum craters disappeared. For now, the glow is only observed at Benbow crater. 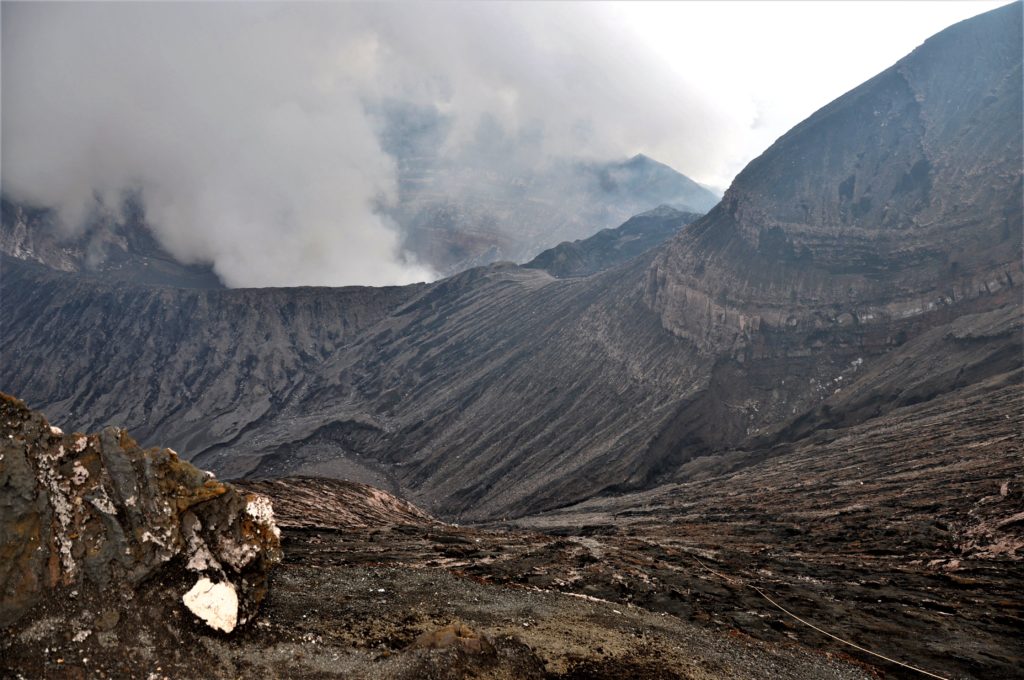 The Sentinel-5P data acquired on 25 January 2022 shows that the increased activity yesterday on Benbow crater also produced SO2 emissions. Therefore, people on Ambrym island may have experience acid rain again. Since the December 2018 eruption, people on Ambrym island especially those exposed to wind directions have not been experiencing the impacts of acid rain.
Therefore, it is highly advised to follow the key messages below on what to do, before, during and after.
Vanuatu Meteorology and Geohazards Department will continue to closely monitor the situation and advise accordingly. 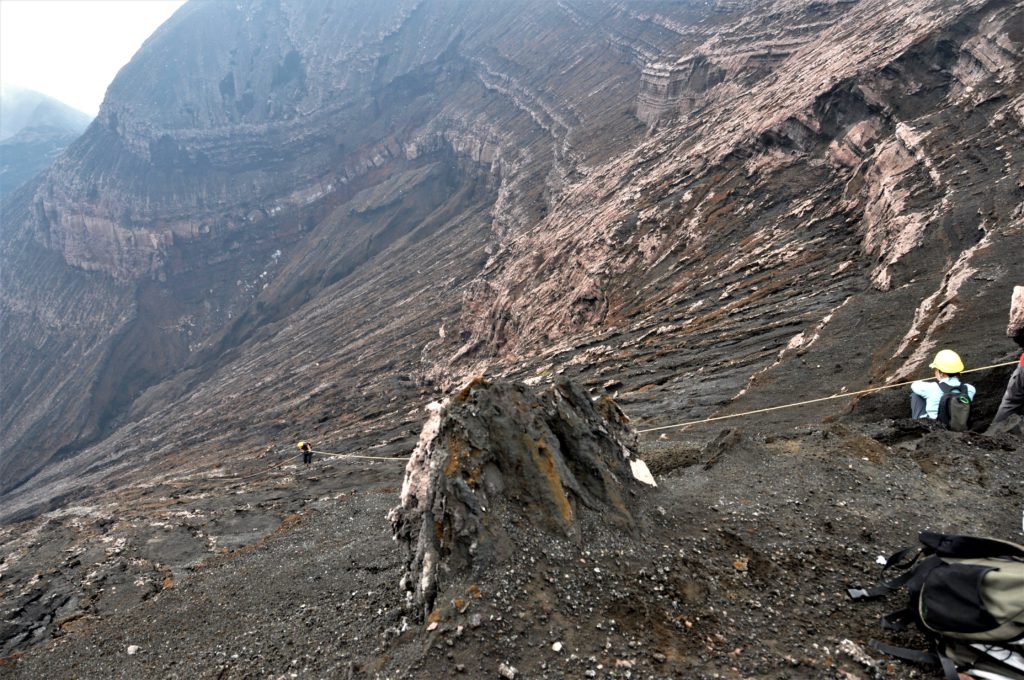 Descent into the Bembow crater (2011)

Ambrym, a large basaltic volcano with a 12-km-wide caldera, is one of the most active volcanoes of the New Hebrides Arc. A thick, almost exclusively pyroclastic sequence, initially dacitic then basaltic, overlies lava flows of a pre-caldera shield volcano. The caldera was formed during a major Plinian eruption with dacitic pyroclastic flows about 1,900 years ago. Post-caldera eruptions, primarily from Marum and Benbow cones, have partially filled the caldera floor and produced lava flows that ponded on the floor or overflowed through gaps in the caldera rim. Post-caldera eruptions have also formed a series of scoria cones and maars along a fissure system oriented ENE-WSW. Eruptions have apparently occurred almost yearly during historical time from cones within the caldera or from flank vents. However, from 1850 to 1950, reporting was mostly limited to extra-caldera eruptions that would have affected local populations.

In the light of the surveillance data, it is highlighted:
1) VOLCANOLOGICAL OBSERVATIONS: During this period, normal explosive activity of the Strombolian type was observed with projection activity in the North zone. The total hourly frequency of explosions fluctuated between medium and medium-high values (11-17 events / h). The intensity of the explosions varied from low to medium in both the North Crater area and the Center-South Crater area. 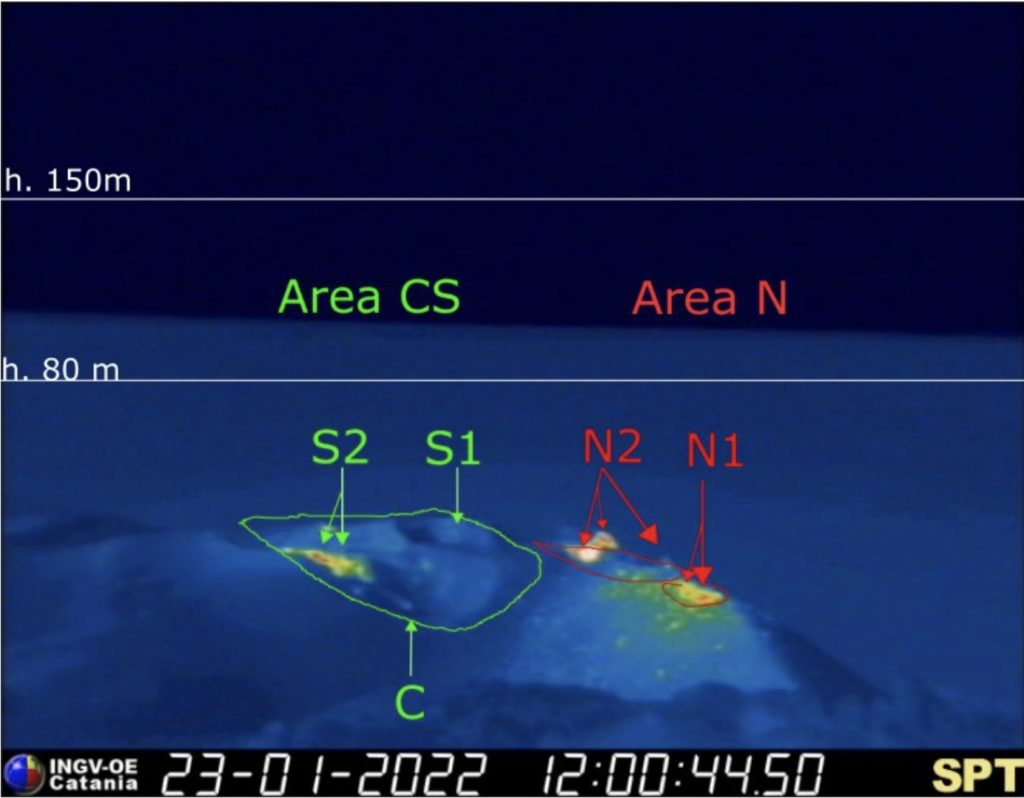 2) SEISMOLOGY: The seismological parameters monitored do not show any significant variations.
3) GROUND DEFORMATIONS: Ground deformation monitoring networks did not detect any significant changes during the week.
4) GEOCHEMISTRY: SO2 flux at an average level
CO2 flux in the crater area on medium to high values.
C/S ratio on medium-high values.
There are no updates on the isotope ratio of helium in groundwater
5) SATELLITE OBSERVATIONS: The thermal activity observed by satellite was at a low level.

VOLCANOLOGICAL OBSERVATIONS
During the observation period, the eruptive activity of Stromboli was characterized through the analysis of images recorded by the INGV-OE surveillance cameras (altitude 190m, Punta Corvi, altitude 400m and Pizzo). The explosive activity was mainly produced by 5 (five) eruptive vents located in the North crater area and 2 (two) eruptive vents located in the Center-South crater area. All the mouths are located inside the depression which occupies the terrace of the crater.
Due to the unfavorable weather conditions of January 17 and 21, the visibility of the crater terrace was insufficient for a correct description of the eruptive activity. 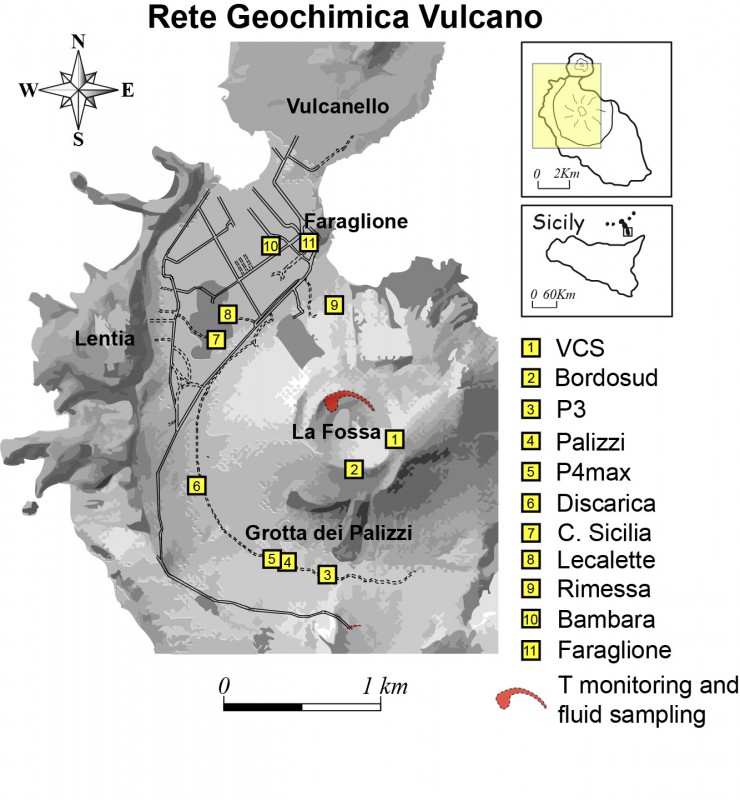 6) Geochemistry of thermal aquifers: The physico-chemical parameters recorded in the Camping Sicilia and Bambara wells remain stable.
7) Local seismicity: Moderate increase in the occurrence rate of VLP type events.
8) Regional seismicity: No earthquake with Ml >= 1.0 was located in the area of ​​the island of Vulcano.
9) Deformations – GNSS: The GNSS monitoring network did not show any significant changes during the previous week.
10) Deformations – Inclinometry: The inclinometric network does not show any significant variations.
11) Other observations: Monthly campaign of CO2 flux: there is a general reduction in the flux of CO2 which goes from 310 to 225 tons/day and a reduction in the surface extension of the abnormal zones.
Mobile GNSS: Mobile GNSS stations were affected by real-time positioning discontinuities but do not appear to show significant variations over the reporting period.
Monthly well measurement campaign: a stabilization of the temperature values ​​of dissolved carbonate species is observed in all the wells monitored, with the exception of the Bambara well where a further decrease in dissolved carbonate species is observed.
Gravimetry: During the reporting period, continuous gravimetry stations did not record any significant changes due to deep sources. 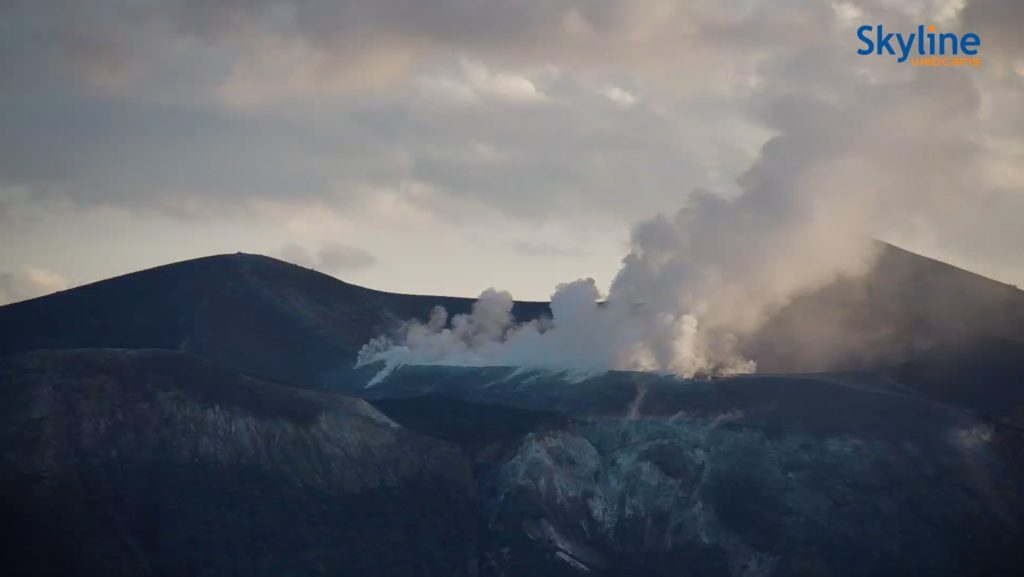 CO2 FLOW IN THE CRATER AREA
The station underwent major maintenance in mid-January. The flow rate was higher than before the intervention, but the absolute value could be influenced by the intervention itself. The acquired values are in any case down, but still at abnormal levels (average weekly value = 12000 g m-2 d-1).

CO2 FLOW AT THE BASE OF LA FOSSA CONE AND IN THE VULCANO PORTO AREA
The CO2 flows from the ground (acquired automatically by the VULCANOGAS network, in the last days of the observation period showed a moderate downward trend at the Camping Sicilia, Rimessa and P4max sites. At the Faraglione site, the values are comparable to those recorded the previous week.
At Camping Sicilia and Rimessa, the current values remain high, although lower than those reached at the height of the crisis.

Seismicity related to fluid dynamics within volcanic conduits showed a slight increase in the number of recorded earthquakes and, in general, similar levels in released seismic energy, compared to the immediately preceding week. This seismic activity was characterized by the occurrence of continuous volcanic tremors, tremor pulses, long and very long period type earthquakes, which had moderate energy levels and variable spectral content. These earthquakes were located mainly in the Arenas crater. Some of these signals were associated with ash emissions and / or incandescences confirmed by the cameras installed in the volcano area. 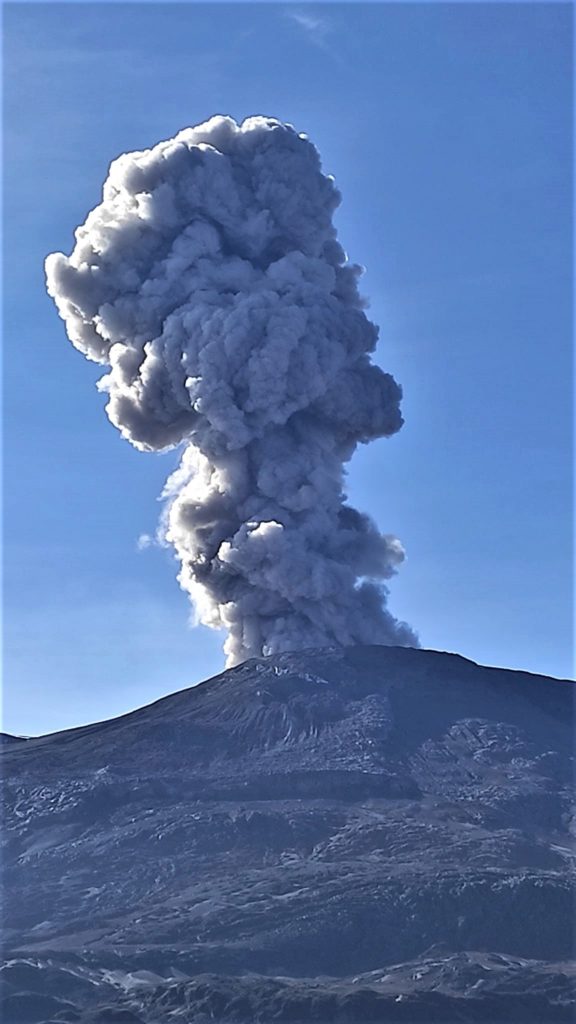 The seismicity generated by rock fracturing decreased in number of earthquakes and increased in seismic energy released, compared to the previous week. This seismic activity was located mainly in the East, South-South-East sectors and in the Arenas crater. The depth of the earthquakes varied between 0.5 and 5.3 km. The maximum magnitude recorded during the week was 1.7 ML (Local Magnitude) corresponding to an earthquake recorded on January 20 at 1:50 p.m. (local time), located 1.9 km east of the Arenas crater, at a depth of 3.9 km.

The column of gas and steam reached a maximum height of 2196 m measured at the top of the volcano on January 24.
Regarding the evolution of the lava dome, which is located at the bottom of the crater, it showed some changes in its appearance and did not present significant variations in its volume, as evidenced by the analysis of satellite images of the last days .

During the last 24 hours, according to the monitoring systems of the Popocatépetl volcano, 32 low intensity exhalations have been identified, accompanied by water vapor and volcanic gases.

During the morning and at the time of this report, a slight emission of volcanic gases with an East-North-East (ENE) direction is observed. 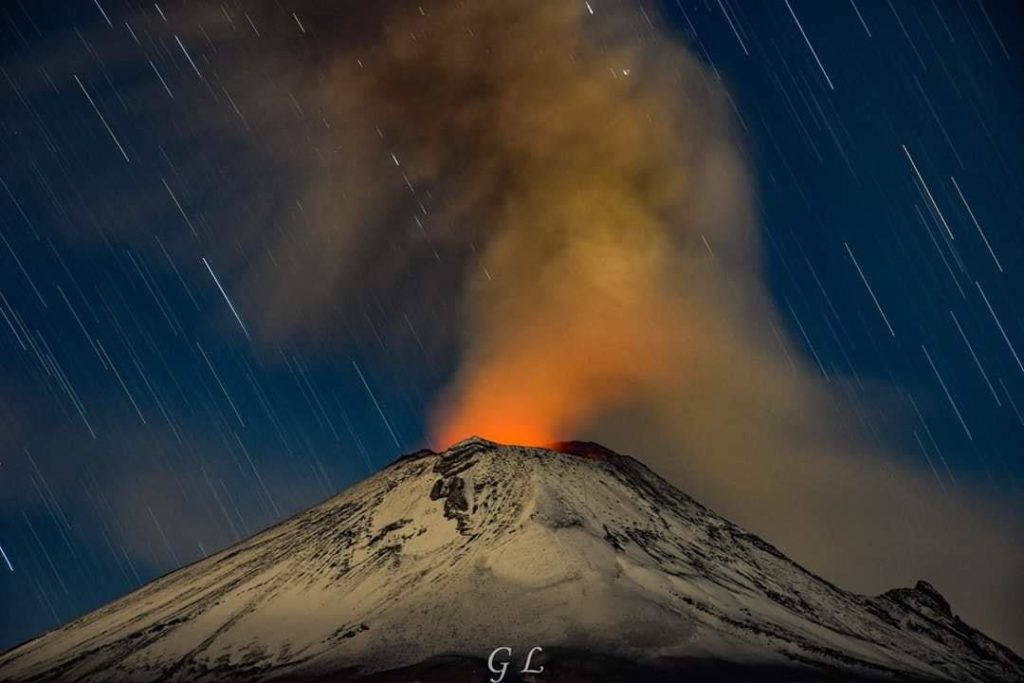 The Popocatépetl volcanic warning light is in YELLOW PHASE 2. 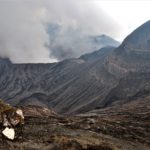 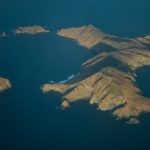