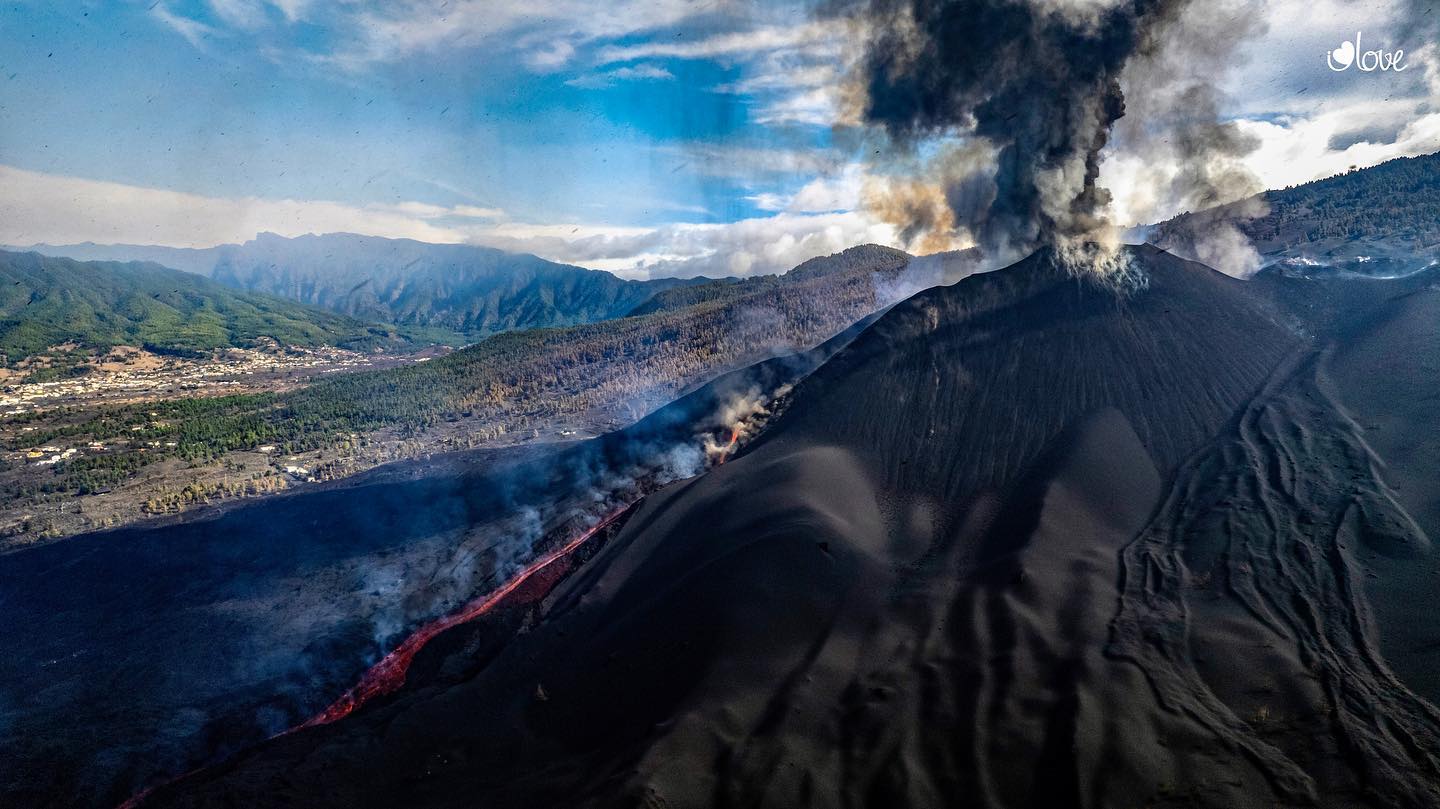 In view of the monitoring data, it is highlighted:
1) VOLCANOLOGICAL OBSERVATIONS: Strombolian activity and lava fountain of the Southeast Crater; continuous degassing and sporadic ash emissions from the Bocca Nuova crater; fumarolic degassing of the Voragine crater; ordinary degassing with rumblings and discontinuous and modest ash emissions from the Northeast Crater.
2) SEISMOLOGY: absence of seismic fracturing activity with Ml> = 2.0; The average amplitude of the volcanic tremor generally remained at low and medium-low values, except for the 23 where very high values ​​were reached in coincidence with the lava fountain.
3) INFRASON: Generally moderate infrasound activity; in conjunction with the lava fountain on day 23 very high activity.
4) DEFORMATIONS: During the last week, the GNSS network has not shown any significant changes. The inclinometric network showed variations in correspondence with the paroxysmal event at the Southeast Crater on October 23. 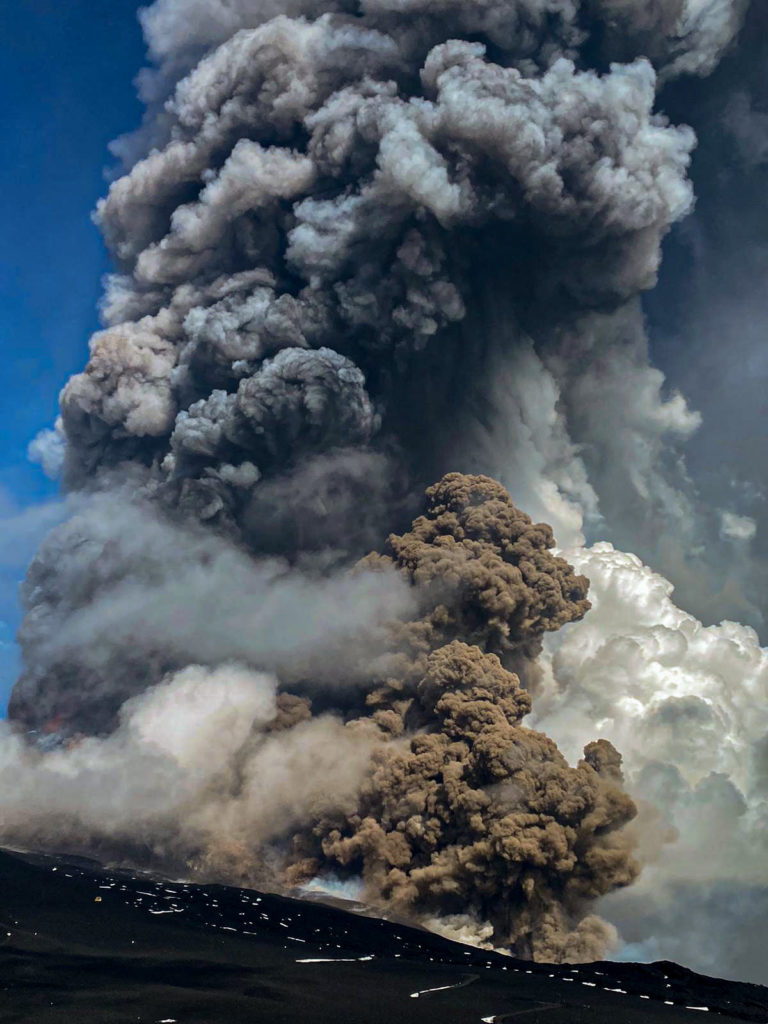 5) GEOCHEMISTRY: The flow of SO2 is placed at an average level
The flux of CO2 emitted by soils is at very high to high values.
The partial pressure of CO2 dissolved in water shows no significant change.
There is no update on the helium isotope ratio (the latest data from 9/21/2021 was at medium-high values).
There are no updates for the C / S report.
6) SATELLITE OBSERVATIONS: The thermal activity in the summit area was at a high level in correspondence with the lava fountain of the Southeast Crater on October 23, 2021.

During the week, the monitoring of the volcanic activity of Etna was carried out thanks to the analysis of the images of the network of surveillance cameras of the INGV section of Catania, of the Osservatorio Etneo (INGV-OE) and through two field inspections of some of the INGV staff on October 20 and 23, 2021. During the observation period, the activity mainly concerned the Southeast Crater (CSE) and only marginally the other summit craters. (Fig 3.1). The alternating weather conditions during the week made the observation of volcanic activity discontinuous thanks to the network of surveillance cameras. 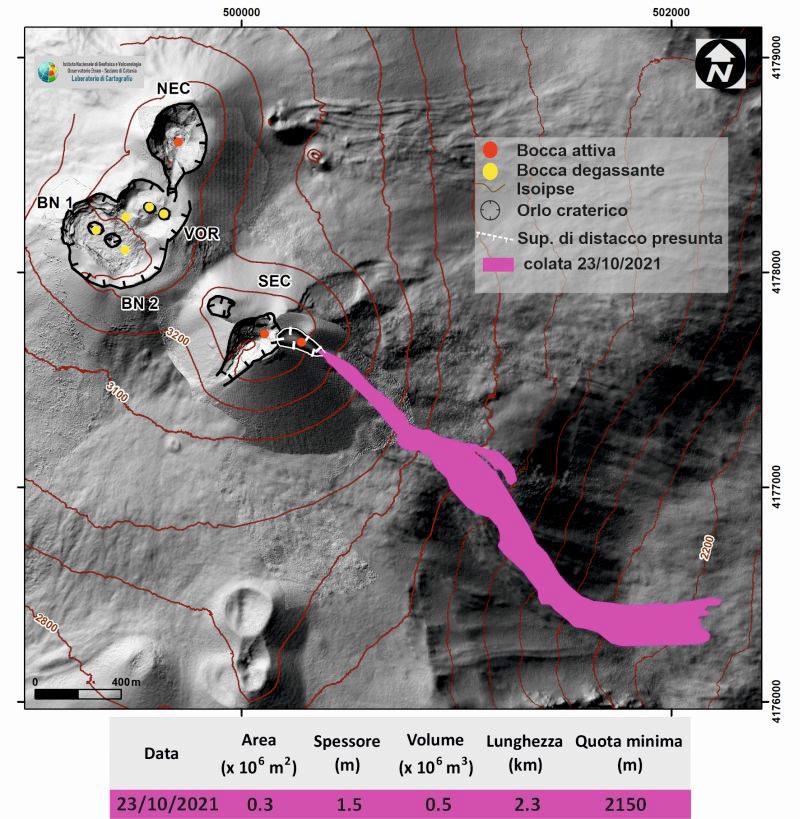 Fig. 3.1 – Map of the lava field of October 23, 2021 on a shaded model of the terrain.
The morphological update of the SEC dates back to October 20. The map was produced using an algorithm developed by task 11 Annex B2, which allows the ortho-rectification of the images taken by the thermal camera of Monte Cagliato and Schiena dell’Asino

The CSE, a little over a month after the last lava fountain episode that took place on September 21, produced a new paroxysmal episode during the morning of October 23 (the 52nd in the sequence that began February 16).
A weak resumption of Strombolian activity at the Southeast Crater was observed from the early hours of the morning of 20/10, characterized by sporadic explosions accompanied by small puffs of gas / ash, which moved towards the Southwest. and by lightning, accompanied by gas emissions. Activity saw a further increase from 5:20 p.m. UTC on 10/21, when the projection of scraps of incandescent material beyond the crater rim and discontinuous, light ash emissions dispersed towards the eastern quadrants of the volcanic building.
From the evening of 10/22, there is a further intensification of Strombolian activity, accompanied – from around 08:00 UTC on 10/23 – modest ash emissions which have gradually increased to a sudden stop. at 08:35 UTC. A sequence of very strong explosions, a few minutes later, marked the resumption of the emission of ash.
Strombolian activity intensified very quickly in a lava fountain, which in the phase of maximum intensity reached about 800 m in height and produced an eruptive column about 10 km high in the east-north direction -East. Relapses of pyroclastic material occurred towards the East-North-East on the inhabited areas of Vena, Presa, Piedimonte Etneo, Taormina and up to the province of Reggio Calabria. 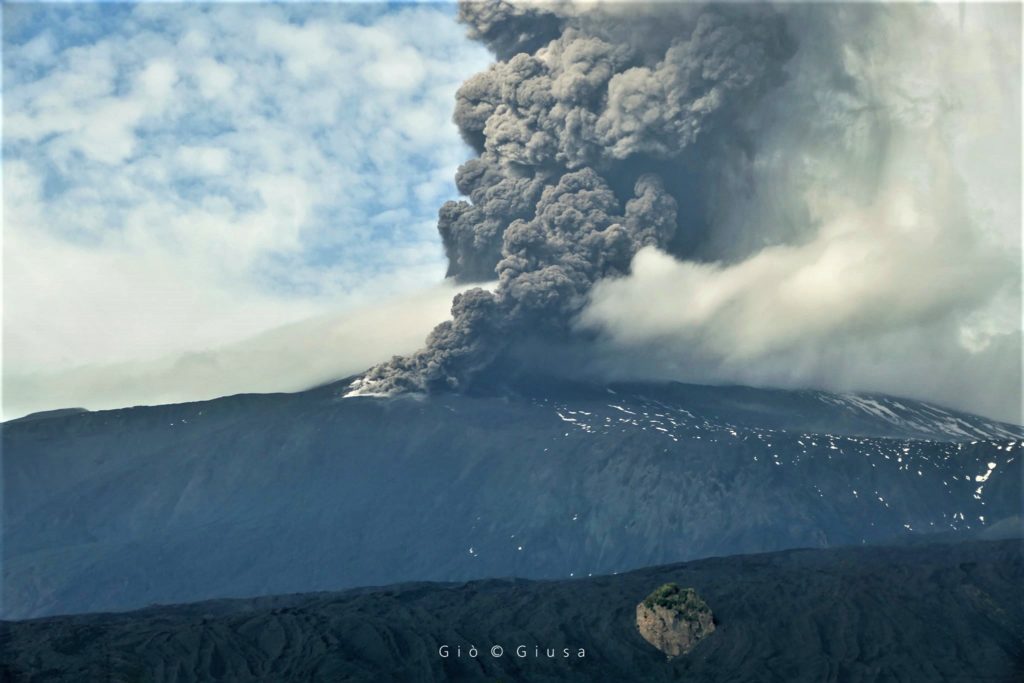 At 08:48 UTC, a pyroclastic flow occurred from the eastern flank of the Southeast Crater cone, which flowed into the western wall of the Valle del Bove for about 1.5 km. At 09:00 UTC a second stream which also traveled about 1.5 km in the Valle del Bove; subsequently other smaller flows were observed, generated during the opening of a breach in the south-eastern flank of the cone.
A lava flow was emitted from the lower part of the breach, directed towards the west side of the Valle del Bove, which reached an altitude of 2150 and which, during the evening, was no longer fed and s is gradually cooled.
At 09:58 UTC, a new pyroclastic flow occurred which split into two branches directed towards the Southeast and the South, and traveled a few hundred meters.
The activity of the lava fountains waned from 10:00 UTC and ended at 10:30 am, while landslides and hot material slides continued from the breach on the southeast flank of the South Crater. East.
Regarding the remaining craters, the Bocca Nuova (BN) was characterized by continuous degassing and sporadic emissions of dilute ash. The Northeast Crater (NEC) produced an ordinary degassing with ash emissions, rare and modest, accompanied by rumblings. Finally, the Voragine crater was characterized by fumarolic degassing. 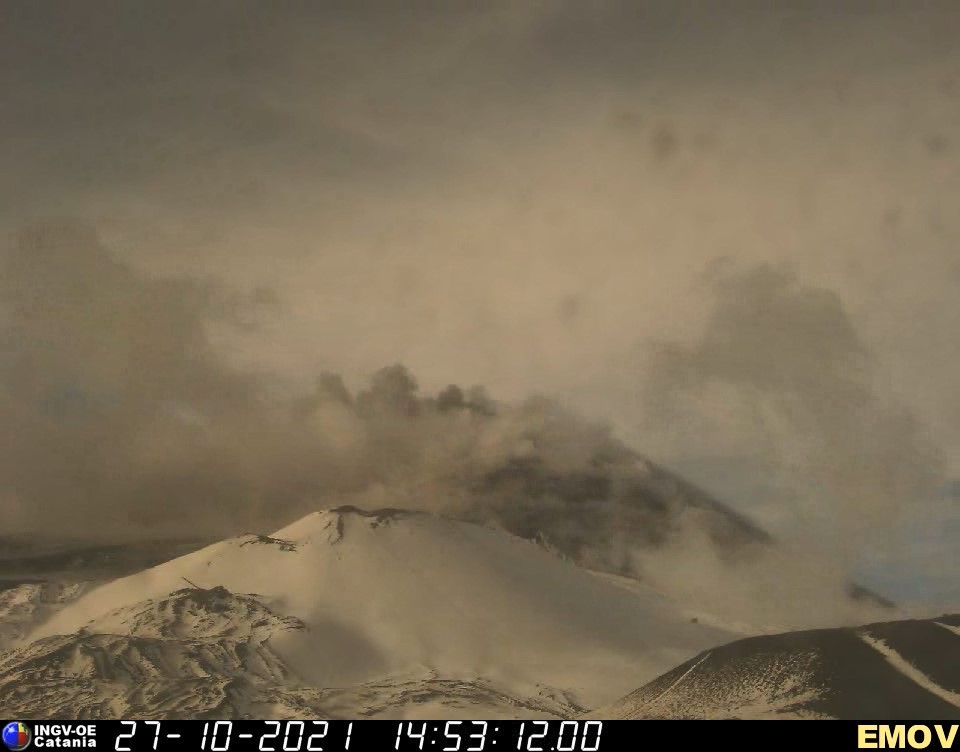 The National Institute of Geophysics and Volcanology, Osservatorio Etneo, reports that sporadic and weak ash emissions from the Southeast Crater were observed in the late morning using surveillance cameras. These emissions generated small puffs of ash which were blown southwest by the wind, dispersing in the atmosphere. No anomalies were observed in the thermal camera images.
The average amplitude of the volcanic tremor shows a fairly stationary trend on medium-low values ​​and the centroid of the sources is located in an area between the Southeast Crater and the Bocca Nuova at an altitude of about 2800 m above sea level.
The infrasound activity is also at low levels, both in number and in amplitude, and is located in correspondence with the Bocca Nuova.
Soil deformation monitoring networks do not show significant variations.

Since the last declaration, 138 earthquakes have been located in the area affected by the volcanic reactivation of Cumbre Vieja, 21 of these earthquakes were felt by the population, the maximum intensity being in the epicentral zone IV-V ( EMS98) in the 6:19 a.m. (UTC) earthquake today with a magnitude of 4.6 mbLg and a depth of 38 km. Of all the localized earthquakes 78 have a magnitude equal to or greater than 3.0 mbLg. 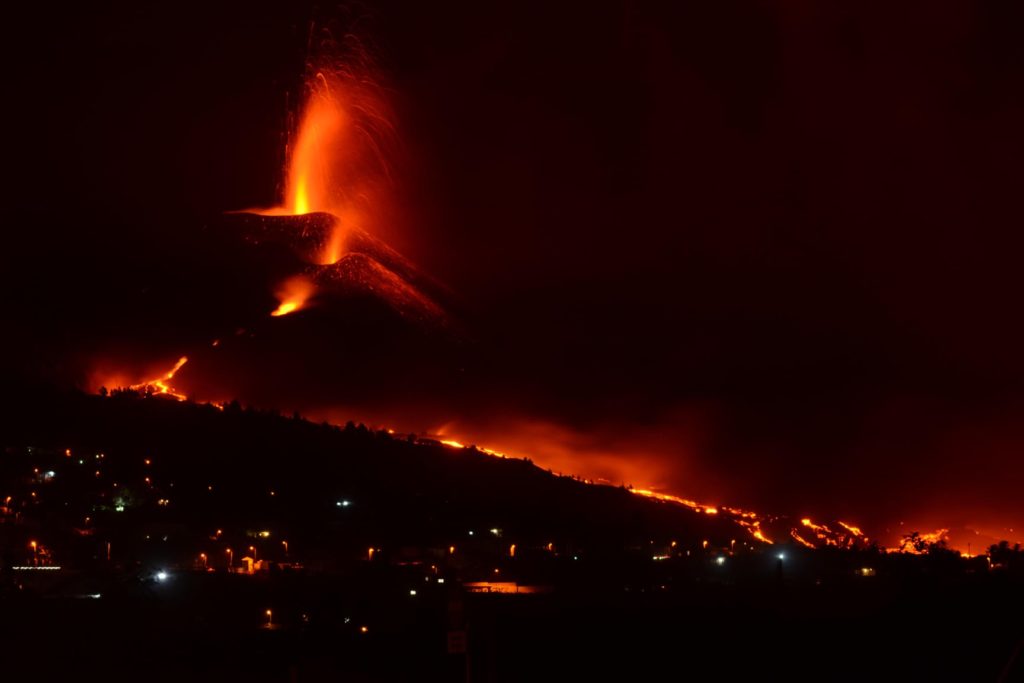 The biggest earthquake is the one located at 4:25 p.m. on the 26th, with a magnitude of 4.9 mbLg and a depth of 34 km, which was felt with a maximum intensity of IV on the island of La Palma and with a lesser intensity on the islands of Tenerife, La Gomera and El Hierro.
25 earthquakes were located at depths of about 30 km, the rest of the hypocenters of the period are located at a shallower depth, about 12 km.

The amplitude of the volcanic tremor signal is maintained at high average levels, with intensifying pulses.
The island’s network of permanent GNSS stations shows that the south elevation and deformation recorded at station LP03, which is closest to the eruptive centers, is reversing. At the most remote stations, a slight deflation persisted, possibly linked to deep seismicity. 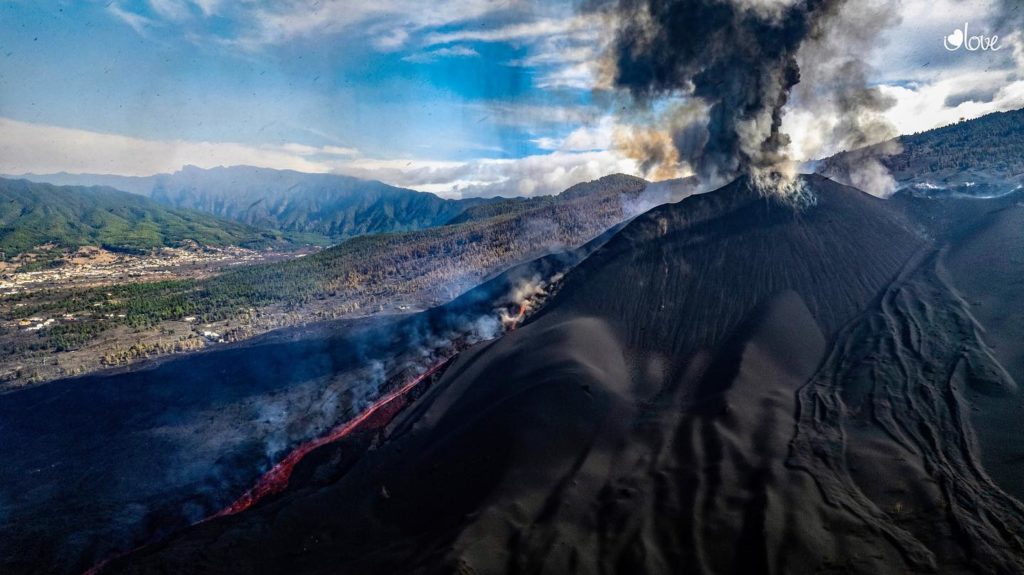 Emissions from the Cumbre Vieja volcano reached a height of 3,400 meters on Wednesday, as reported by María José Blanco, director of the National Geographic Institute of the Canary Islands (IGN). The eruption does not affect the functioning of the Canary Islands airports. Here are the most relevant data proposed after the meeting of the scientific and technical committees monitoring the situation in La Palma:

· The flow that descends towards Corazoncillo has not changed since yesterday. The lava follows the previous trajectories in the last hours.

· 454 people are accommodated in hotels and 38 dependents in social health centers.

· Yesterday there were 24 earthquakes, two of which were greater than magnitude 4.

· The deformation observed in the cone has reversed.

· According to the land register, 1,291 buildings were destroyed, four more than in the last report. 1,038 were residential and 135 were agricultural. 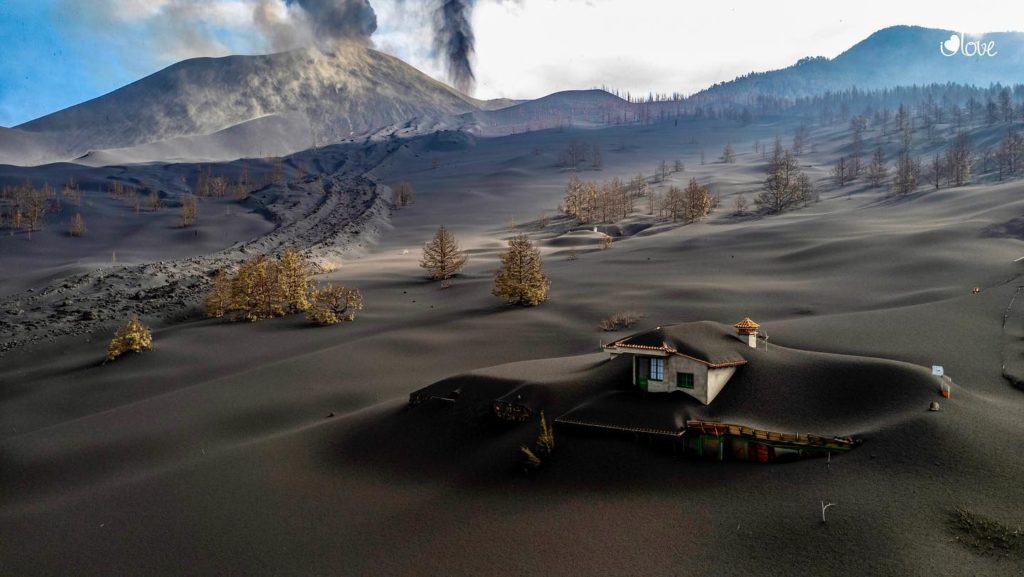 The European Copernicus satellite system brings the area devastated by lava from the volcano of La Palma to 911.6 hectares, 3.4 more than in the previous calculation made early Wednesday and which, in turn, coincided with that of Tuesday to midday.

Yasur volcano activity is continuing in the level of major unrest state. The Volcanic Alert Level remains at Level 2.

New observations on the ground suggest that the Yasur volcanic activity decreased since the 22nd and 23rd October 2021 when Yasur volcano emitted massive plumes of volcanic gases and ashes. With this current activity and ongoing presence of volcanic gases and/or volcanic ash around the summit crater, the danger zone is remains at 1 Km around the volcanic cone. The danger zone for life safety remains in the Danger Zone B (See Yasur caldera safety map below).
Analysis of the latest Yasur seismic data from the volcano monitoring system confirms that Yasur volcano activity remains in the major unrest level. The activity consists of ongoing explosions with gas plumes and/or volcanic ash. Some explosions remain intensified and volcanic projectiles or bombs may fall in and/or around the summit crater. 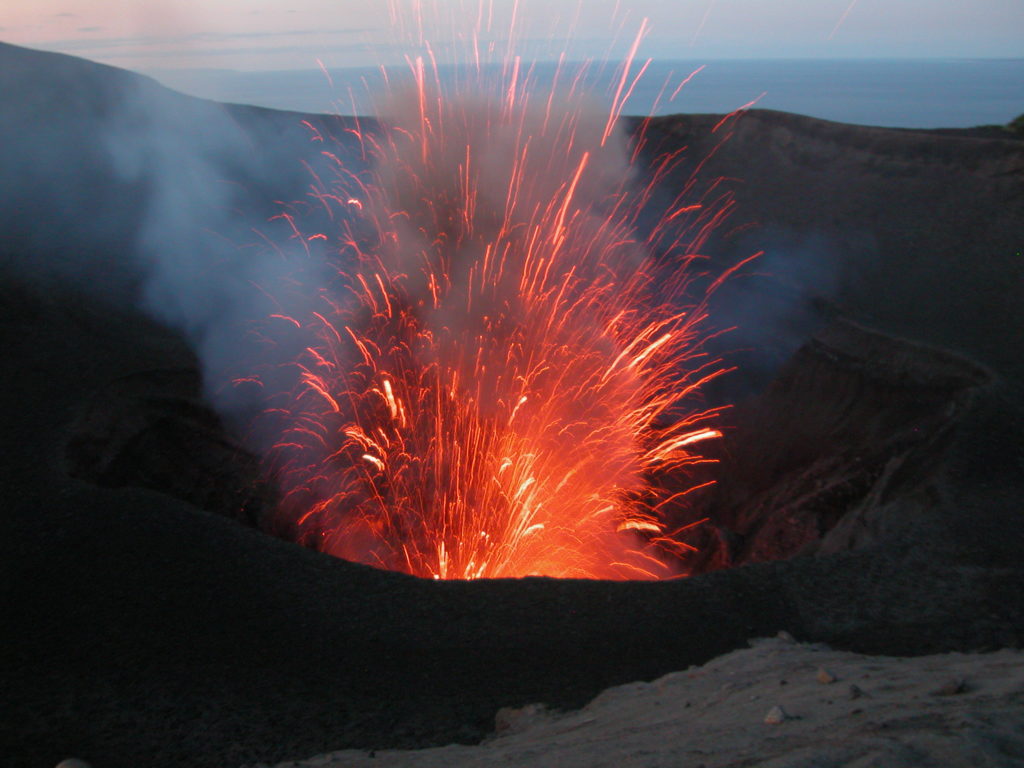 The Vanuatu Meteorology and Geohazards Department (VMGD) reported that seismic activity slightly increased at Yasur beginning at 13h30 on 22 October. Emissions also increased and large, dense ash-and-gas plumes were visible rising from the crater in webcam images at 14h45. Increased ash emissions were confirmed during field observations later that day, prompting VMGD to expand the restricted area to a 1-km radius around the cone, defined by Danger Zone B on the hazard map. The Wellington VAAC noted that ash plumes rose as high as 1.2 km (4,000 ft) a.s.l. and drifted SE, E, and N during 22-24 October, based on webcam views and information from VMGD; emissions ceased by 18h45 on 24 October. The Alert Level remained at 2 (on a scale of 0-4).
Sources : Geohazard Vanuatu , GVP.
Photo : Michel Massat ( archive 2019).

PVMBG reported that at 14h13 on 26 October an eruption at Anak Krakatau produced a dense gray ash plume that rose 500 m above the summit and drifted N. The eruption lasted 45 seconds based on seismic data. The Alert Level remained at 2 (on a scale of 1-4), and the public was warned to remain outside of the 2-km-radius hazard zone from the crater. 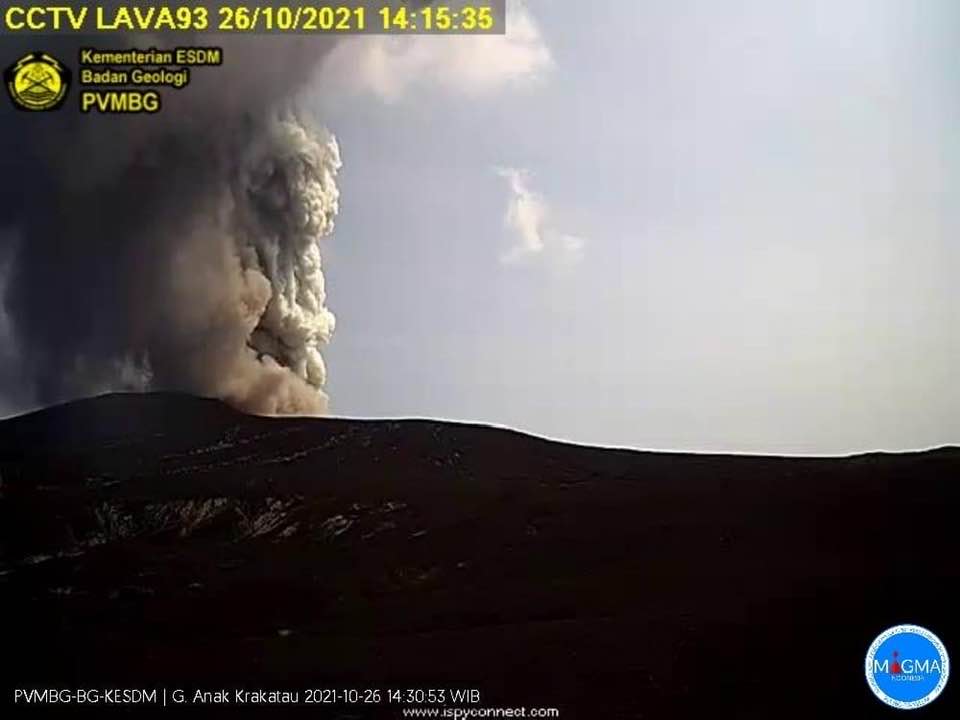 Other Volcanic Cloud Information :
Visuals directly from the cctv were observed eruptions with the color of the thick white-gray eruption smoke 500m from the top of the volcano, the wind direction slowly to the north

JMA characterized the eruption at Asosan that occurred at 11h43 on 20 October as medium-sized. The event ejected blocks 900 m S, produced pyroclastic flows that descended 1.3 km W, and generated an ash plume that rose 3.5 km above the crater rim. Very small eruptive events were recorded during 12h44-14h10. The sulfur dioxide emission rate was high at 2,500 tons per day on 21 October. White plumes rose 900 m from the crater during 21-22 October. The Alert Level remained at 3 (on a scale of 1-5). 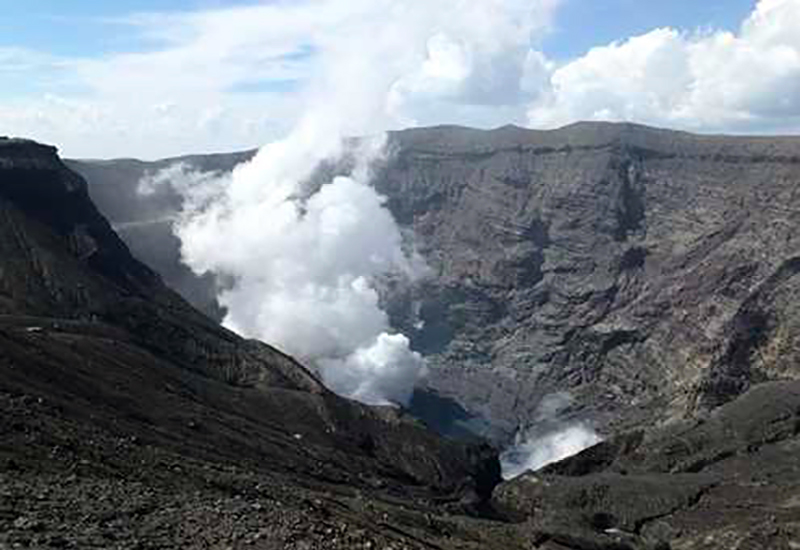 A steam plume rose about 100 m from the floor of Nakadake Crater 1 on 16 June 2020. A small steam plume was also observed by the S crater wall. Courtesy of JMA 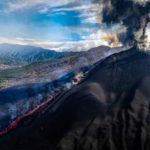 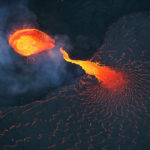