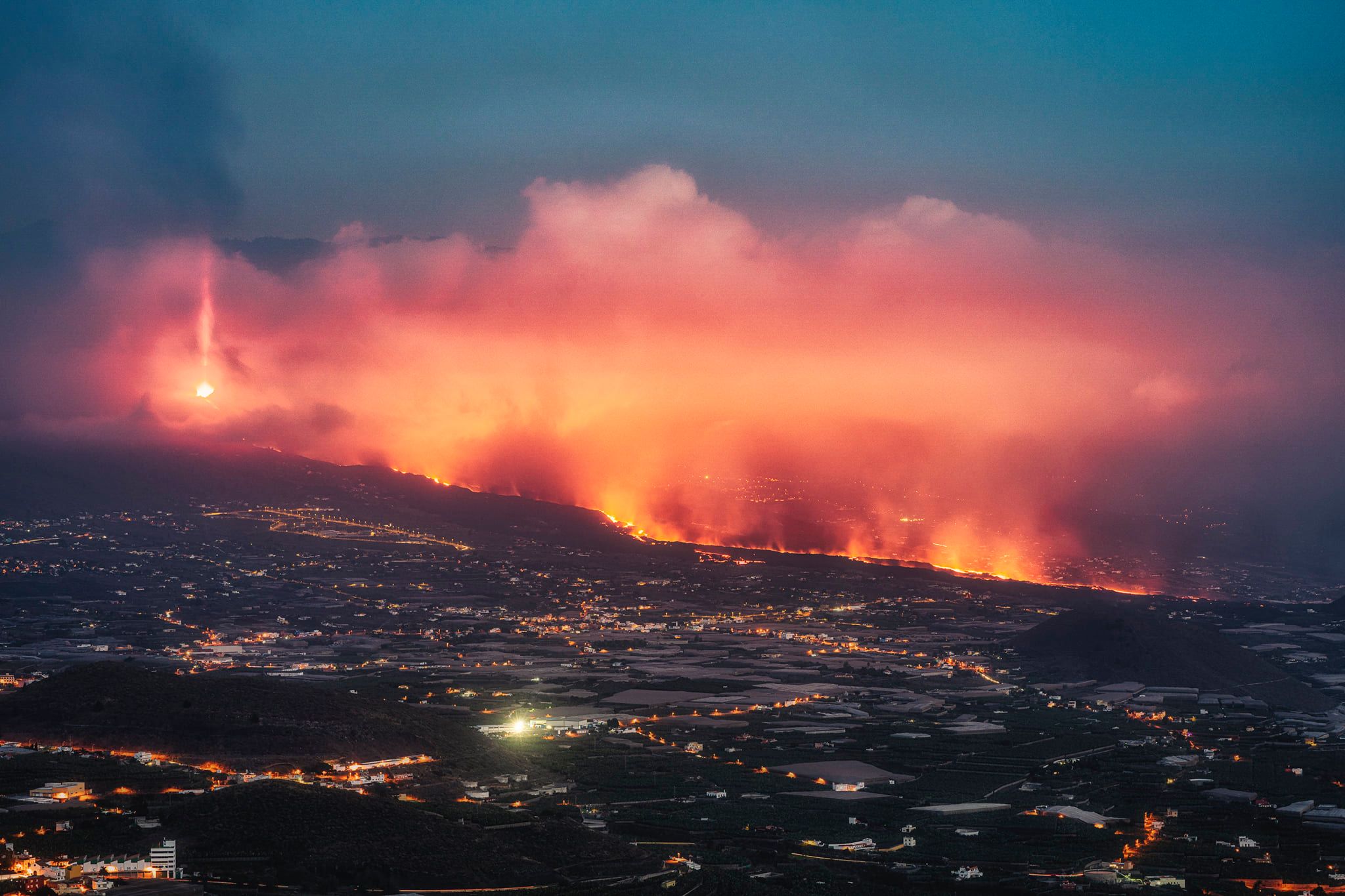 The seismic crisis that began at 4:33 am local time (12:33 am UTC) on October 18, 2021 has stopped. The intrusion that has taken place in the Plaine des Osmondes no longer seems to be progressing today. Apart from a Magnitude M1.9 earthquake at 10:51 (local time) located 1.4 km below sea level, no Magnitude M> or = 0.5 earthquake has been recorded today by the OVPF ,
whether under the summit or in the Plaine des Osmondes. 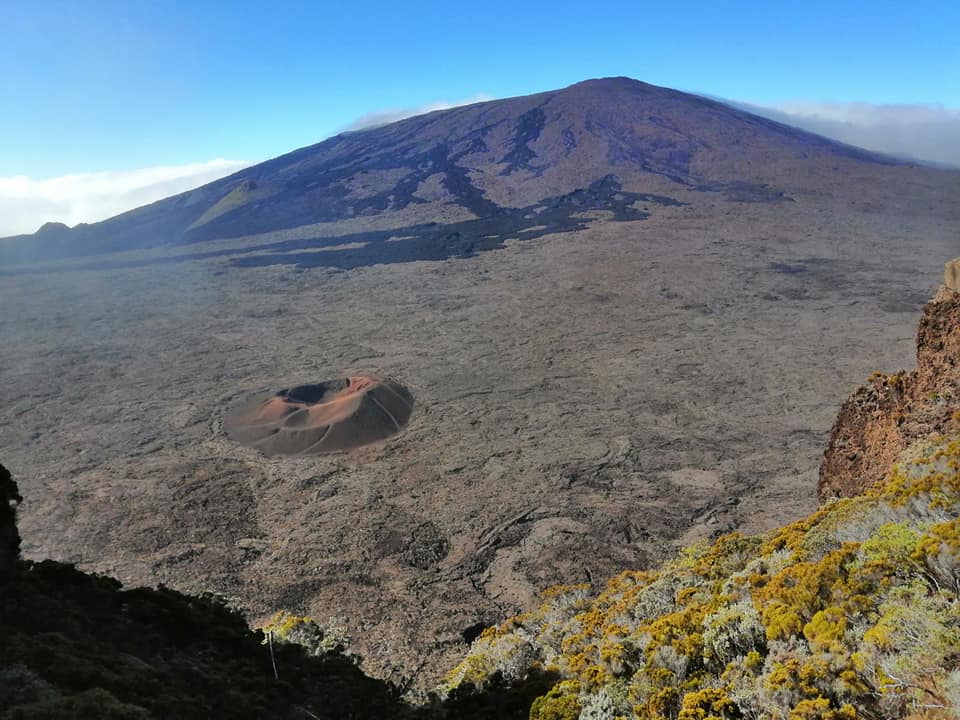 Despite the end of the seismic crisis and the cessation of the deep intrusion, a resumption of the progress of the intrusion further downstream or in another area is not excluded.

Activity Summary:
Kīlauea volcano is erupting. As of this morning, October 18, 2021, lava continues to erupt from a single vent in the western wall of Halemaʻumaʻu crater. All lava activity is confined within Halemaʻumaʻu crater in Hawai‘i Volcanoes National Park. Seismicity and volcanic gas emission rates remain elevated.

Summit Observations:
Sulfur dioxide (SO2) emission rates remain high, with a preliminary emission rate for October 17, 2021 of approximately 2,700 tonnes per day. Summit tilt was flat over the past 24 hours. 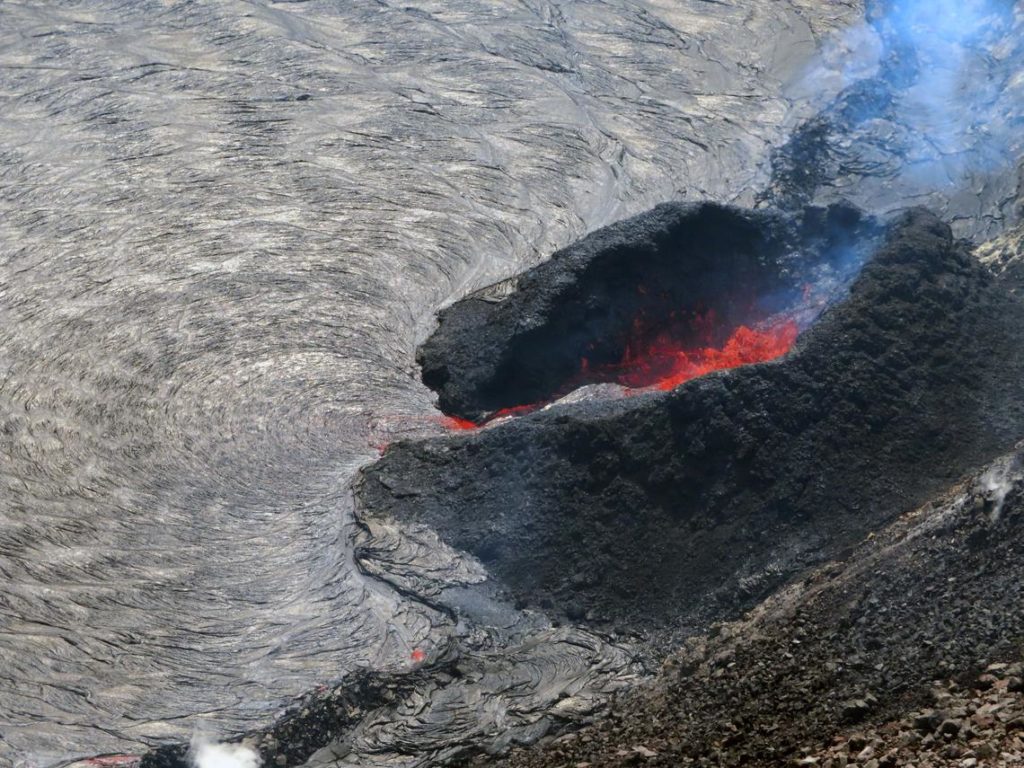 The active west vent of Halema‘uma‘u as seen from the northwest rim. The lava at the vent exits from a narrow spillway and feeds into the lake. The radial pattern seen at the mouth of the spillway is created as the lava on the surface cools and is pushed away from the vent, forming a rope-like texture.

Halemaʻumaʻu Lava Lake Observations:
Lava continues to erupt from a single vent in the western wall of Halemaʻumaʻu crater. The western end of the lake showed a maximum elevation of approximately 788 meters (2585 ft) above sea level when measured by field crews on October 17, which is a total increase of about 45 meters (148 ft) since lava emerged on September 29. The total erupted volume since the beginning of the eruption was estimated to be about 15.9 million cubic meters (4.2 billion gallons) on October 8. The western vent had fountain heights of 5 m (16 ft) observed by field crews on October 17. The fountain has built a spatter cone with an opening facing east from which lava is flowing into the lake. The central island and several of the smaller eastern islets from the 2020 lava lake are still above the lake surface along with an island of the 2020 western vent rampart in the northwest part of the lake. The lava lake is not level across its surface due to the location of the vent in the western end. Areas closer to the vent are about 2-3 meters (7-10 ft) higher in elevation compared to the north and south part of the lake and 8 meters (26 ft) higher than the east end of the lava lake.

In total, 9 earthquakes were located at depths of about 30 km, the rest of the hypocenters of the period are located at a shallower depth, about 12 km.
The volcanic tremor signal maintains a high average amplitude, with fewer intensifying pulses than in the previous 24 hours. 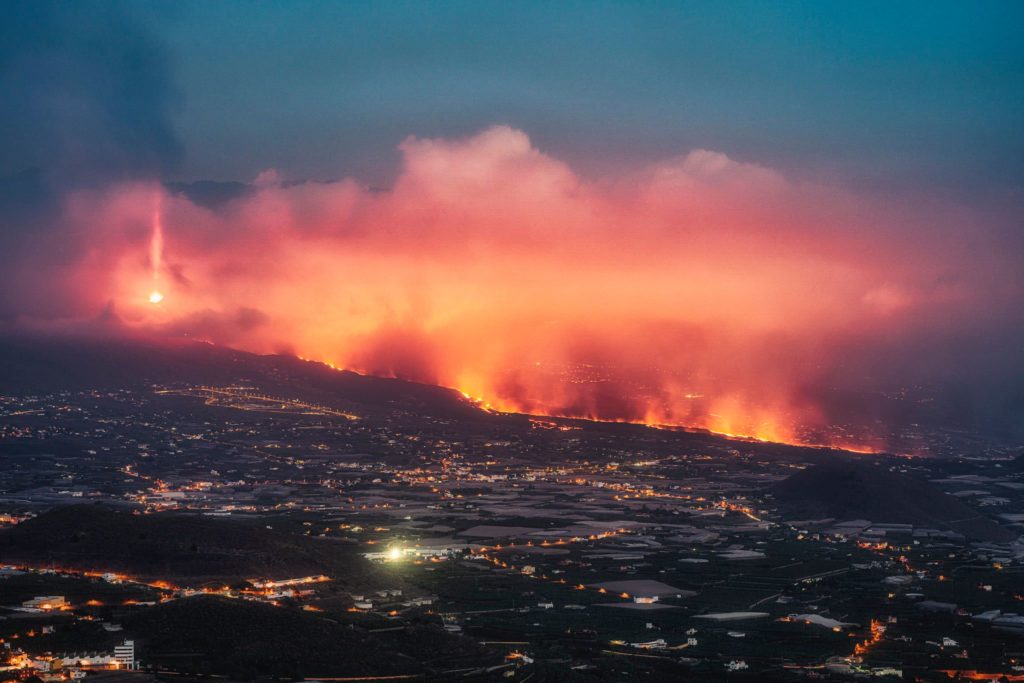 Seismic activity on the island of La Palma has declined slightly since last midnight compared to previous days, with 14 movements recorded in the early hours of Tuesday, according to data from the National Geographic Institute (IGN). The one with the highest intensity, 3.9 degrees, took place in Fuencaliente de La Palma, 37 kilometers deep. Yesterday Monday and Saturday, a 4.6 degree earthquake was recorded in Mazo, so far the biggest felt since the eruption of the Cumbre Vieja volcano. Of the 14 earthquakes recorded since midnight, most have occurred in Fuencaliente and only three in Mazo.

The technical director of the Canary Islands Volcanic Emergency Plan (Pevolca), Miguel Ángel Morcuende, reported on Tuesday that the flow that a few days ago detached from another in the Callejón de La Gata industrial zone is supervised, due to its progress towards the district of La Laguna, in Los Llanos de Aridane. During a press conference after the meeting of the technical committee of Pevolca, Morcuende stressed that there is no certainty that this flow, reaches the center of La Laguna, because there are some hollows that can channel it towards the west.

If that happened, this flow would join the one flowing towards the sea, from which it is barely separated by a little more than a hundred meters and advances at a speed of between 5 and 10 meters per hour. This would be the “ideal” scenario, Morcuende said; the worst would be if this branch continued to approach the district of La Laguna, already evacuated, which will probably be known in the next 24 hours.

The Crisis Committee is also concerned about the lava flows which have been detected in another branch further north of this flow which is heading towards the center of La Laguna, as « they are gaining strength », although the current trend is that he ends up meeting. « We hope to resolve this matter in a few hours, to know the direction that these flows are taking. According to this direction, we will have more or less damage, » said Morcuende, who added that there is currently no more ‘planned evacuations. 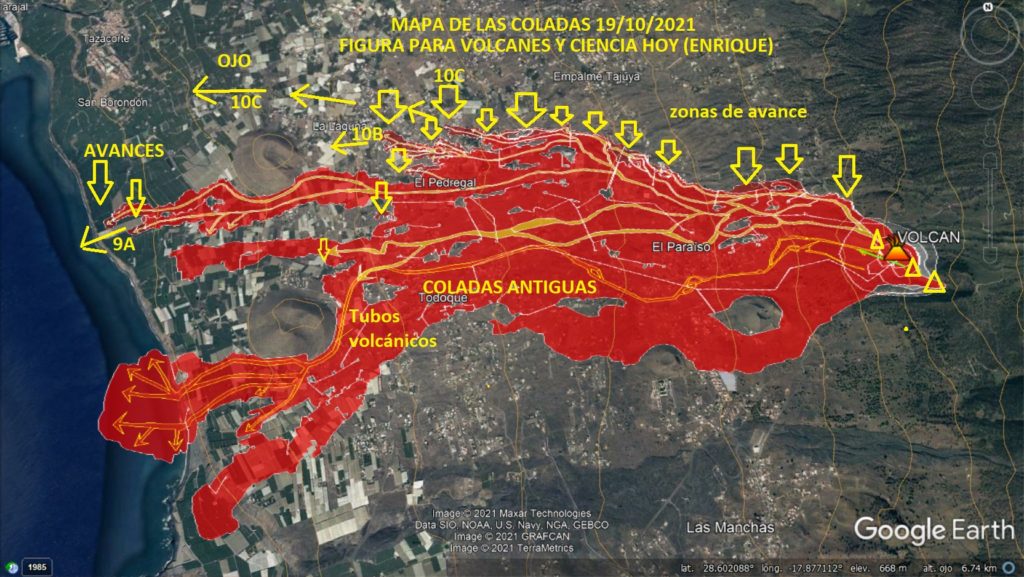 To this is added another flow, the one that broke away from the original one that devastated the Todoque district, which receives lava inputs, although « rare ». Morcuende and the director of the National Geographic Institute (IGN) of the Canary Islands, María José Blanco, stressed that there is no data today that allows us to have the intuition that the eruptive process is over.  « We are far from it, » Blanco said, despite the fact that the sulfur dioxide emission rate measured yesterday Monday was 9,938 tonnes. « These are high values, although lower, » said Blanco, who despite the fact that technicians from the Canary Islands Volcanic Institute (Involcan) who carry out these measurements have verified a reduction in recent days, indicated that ‘he would have to fall between 100 and 500 tonnes per day to think about the end of the eruption.

Regarding the drop in ash emissions and the explosiveness of the volcano in the last few hours, Blanco recalled that on September 27, there had been « a total shutdown » of the tremor and observable signs on the surface, « and that meant nothing « . « It can be something ephemeral and that later it will resume with the previous activity », underlined the director of the IGN in the Canaries.

In view of the monitoring data, it is highlighted:
1) VOLCANOLOGICAL OBSERVATIONS: Degassing activity of summit craters; rare and modest ash emissions from the Northeast Crater
2) SEISMOLOGY: absence of seismic fracturing activity with Ml> = 2.0; the amplitude of the volcanic tremor at a generally low level.
3) INFRASOUND: Moderate infrasound activity.
4) DEFORMATIONS: During the last week, the soil deformation monitoring networks have not recorded any significant changes.

5) GEOCHEMISTRY: The flow of SO2 is placed at an average level
HCl flow occurs at a medium-low level.
The flow of CO2 emitted by soils is at high values.
The partial pressure of CO2 dissolved in water does not show significant variations.
There is no update on the isotope ratio of helium (the latest data from 9/21/2021 was at medium-high values).
There are no updates for the C / S report.
6) SATELLITE OBSERVATIONS: The thermal activity in the summit area was at a low level.

During the week, the monitoring of the volcanic activity of Etna was carried out by analyzing the images of the network of surveillance cameras of the INGV section of Catania, Osservatorio Etneo (INGV-OE). The presence of cloud cover for most of the week made observations discontinuous. 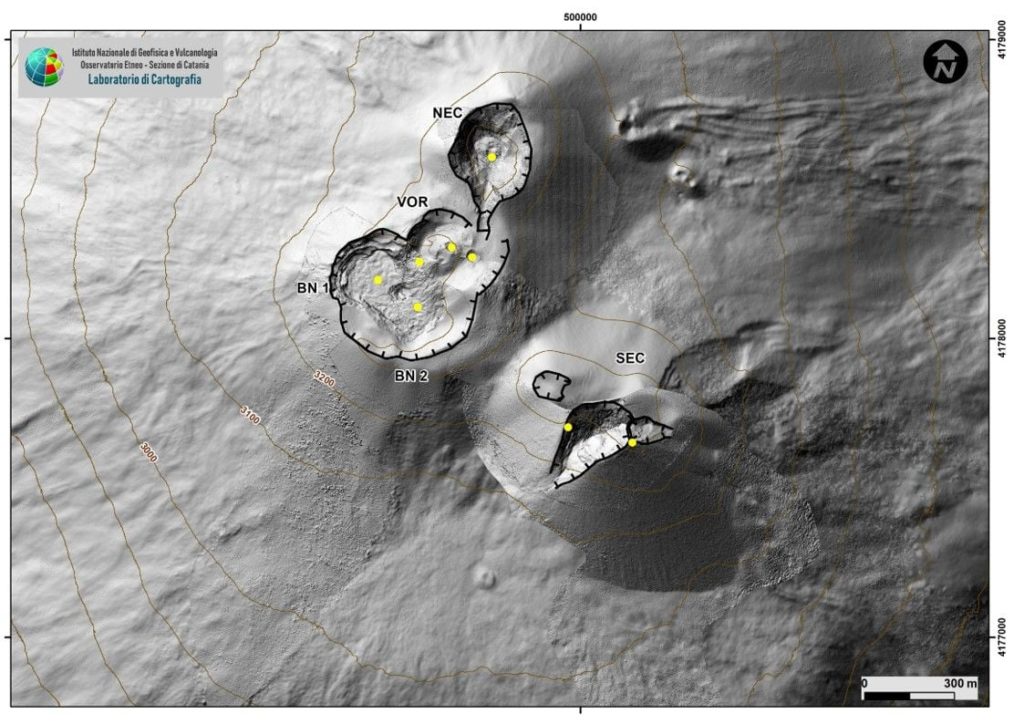 Fig. 3.1 – Map of the summit craters of Etna, morphological update of the SEC carried out following the drone and GPS campaign of October 4, 2021. The topographic reference base, on which the morphological updates are superimposed, is the DEM 2014 prepared by Aerogeofisica Laboratoire – Rome Section 2. The yellow dots indicate the degassing vents and the fumaroles.

Volcanic activity comparable to that of the previous week was observed during the week. In detail, the most consistent degassing took place at the Bocca crater
Nuova (BN) and was predominantly continuous. The Southeast Crater (SEC) was characterized by continuous fumarolic degassing concentrated on the eastern edge of the crater. The Northeast Crater (NEC) produced ordinary degassing with rare and modest ash emissions. Finally, the Voragine crater was characterized by fumarolic degassing. 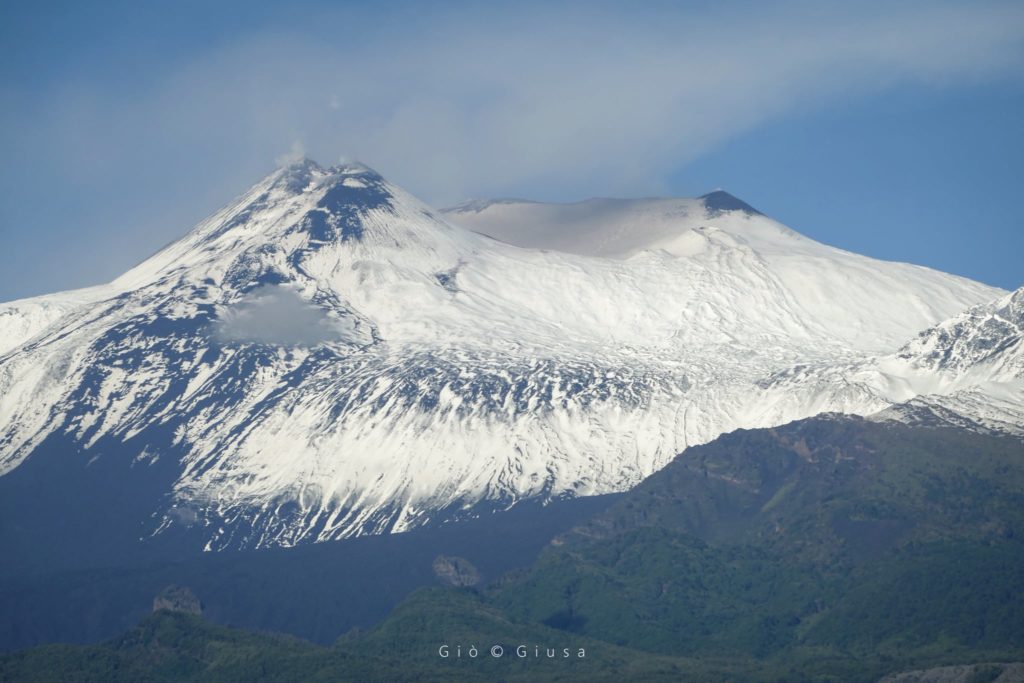 Volcanic tremor:
The mean amplitude of the volcanic tremor remained low for most of the week, except for a few fluctuations in amplitude down to medium-low values. The locations of the sources of the tremor are concentrated in the area of the central craters with depths between 0 and 3 km above mean sea level.

VOLCANIC ACTIVITY RELEASE of October 20, 2021 05:38:29 (UTC) – ETNA.
The National Institute of Geophysics and Volcanology, Osservatorio Etneo, reports that from around 02:47 UTC, a weak resumption of Strombolian activity is observed at the level of the Southeast crater. For the moment, the activity has produced isolated sporadic explosions accompanied by small puffs of gas / ash, which move towards the southwest, dispersing in the atmosphere. In the following minutes, sporadic faint glows were observed, accompanied by gas emissions. The average amplitude of the volcanic tremor oscillates between low and medium-low values. The locations of the sources of the tremor are concentrated in the zone of the central craters with depths between 2600 and 2700 m above sea level. The rate of occurrence of infrasound events is moderate with sources located in the zone. of the Bocca Nuova crater and some events at the Southeast crater. Soil deformation monitoring networks do not show significant variations. Further updates will be communicated shortly 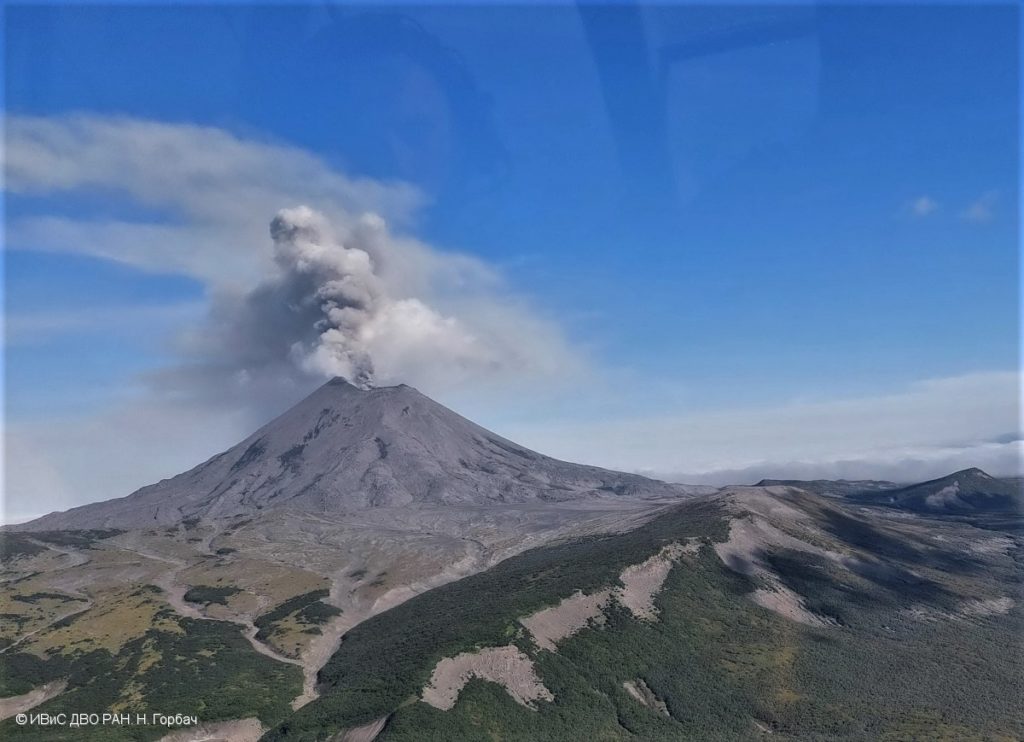 Volcanic Activity Summary:
A moderate eruptive activity of the volcano continues. Satellite data by KVERT showed ash plume extended for 107 km to the east of the volcano.
This activity continues. Ash explosions up to 7-8 km (23,000-26,200 ft) a.s.l. could occur at any time. Ongoing activity could affect international and low-flying aircrafts.

LAHAR in the Ceniza ravine – tributary of the rio ACHIGUATE

The INSIVUMEH seismic network located on the Volcán Fuego, records a high frequency seismic tremor, generated by volcanic materials that descend through the ravine of Ceniza, due to the rain that is currently occurring in the upper and lower parts of the volcanic building . 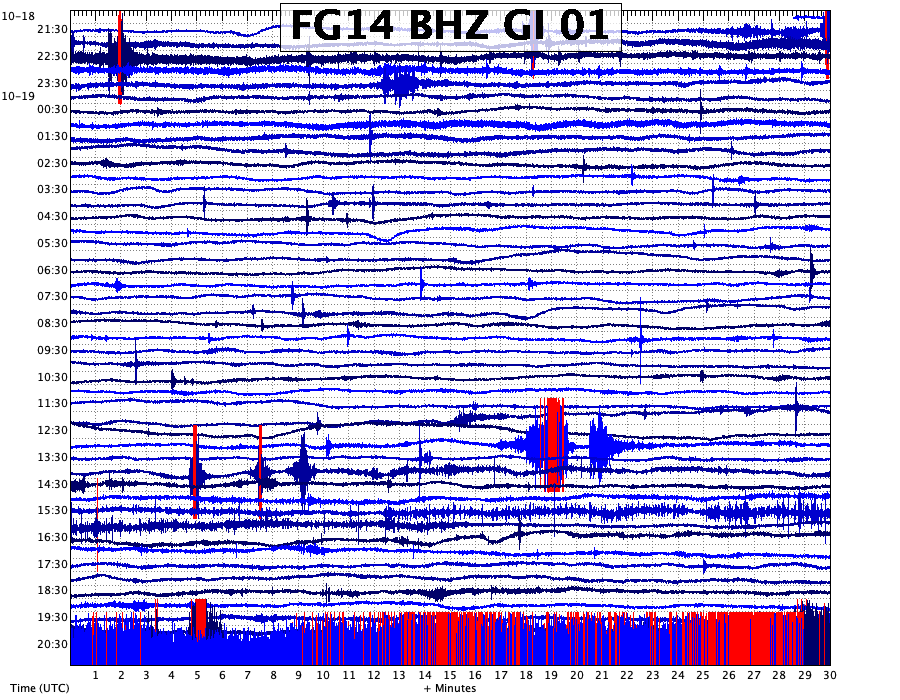 Lahars can carry tree branches and volcanic material such as ash and boulders 1 to 2 meters in diameter that vibrate the ground. If the rain persists, the generation of more lahars of larger dimensions in this or other ravines of the volcanic complex is not excluded.

According to the Japanese Meteorological Agency, the first crater of Mount Aso in Kumamoto Prefecture erupted around 11:43 am on the 20th. The pyroclastic flow reached more than 1 km from the crater. The eruption reached a height of about 3,500 meters and volcanic ash fell in the vicinity. 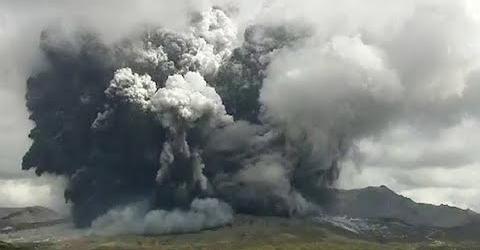 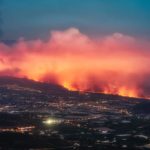 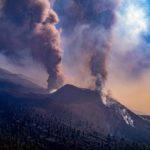