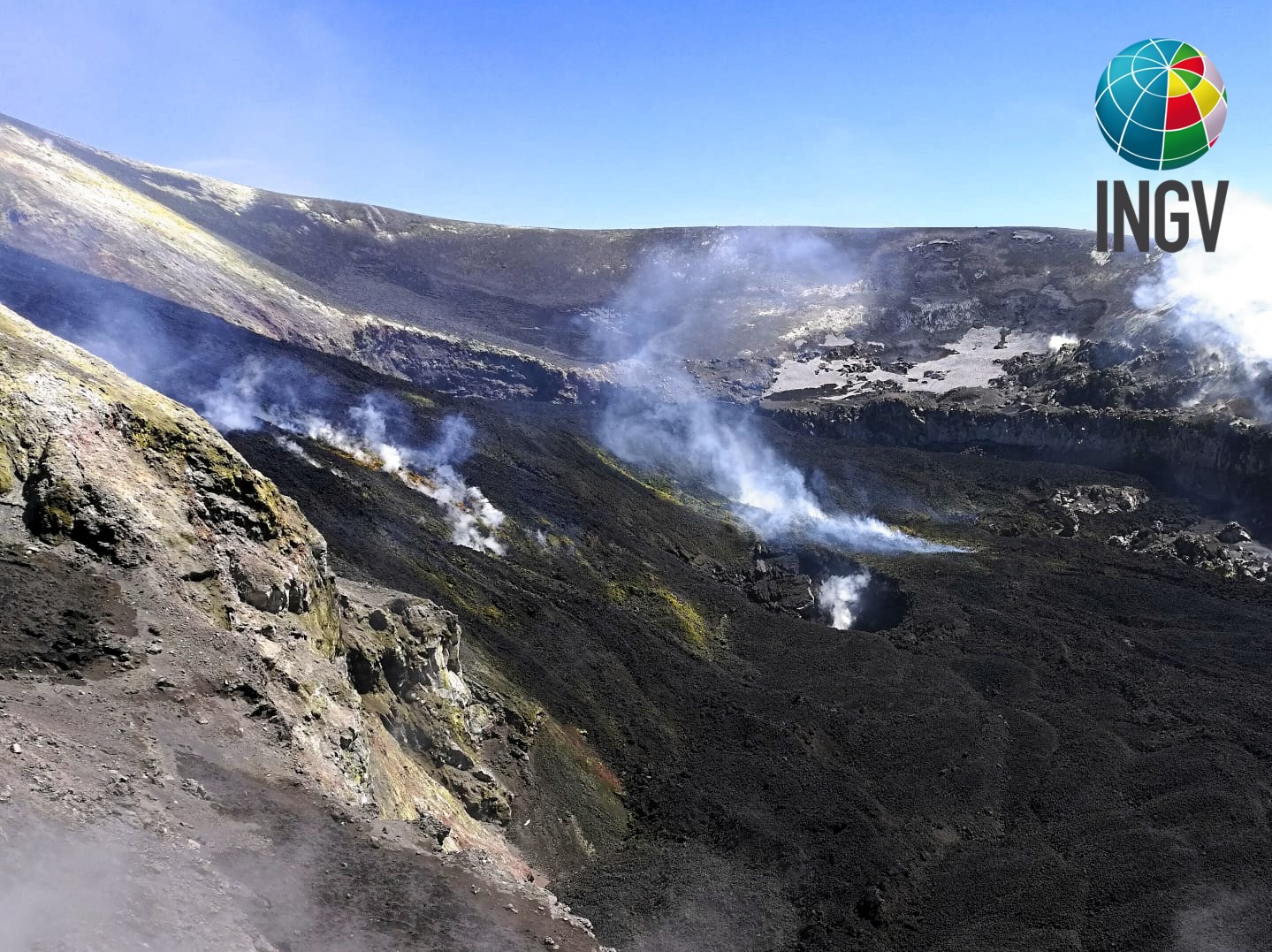 The Istituto Nazionale di Geofisica e Vulcanologia, Osservatorio Etneo, reports that since 20:50 UTC, there has been a rapid increase in the magnitude of volcanic tremors, which peaked at 21:26 UTC and remains at high levels. This is accompanied by a modest increase in infrasound activity, which is located in the region of the Southeast / New Crater complex. 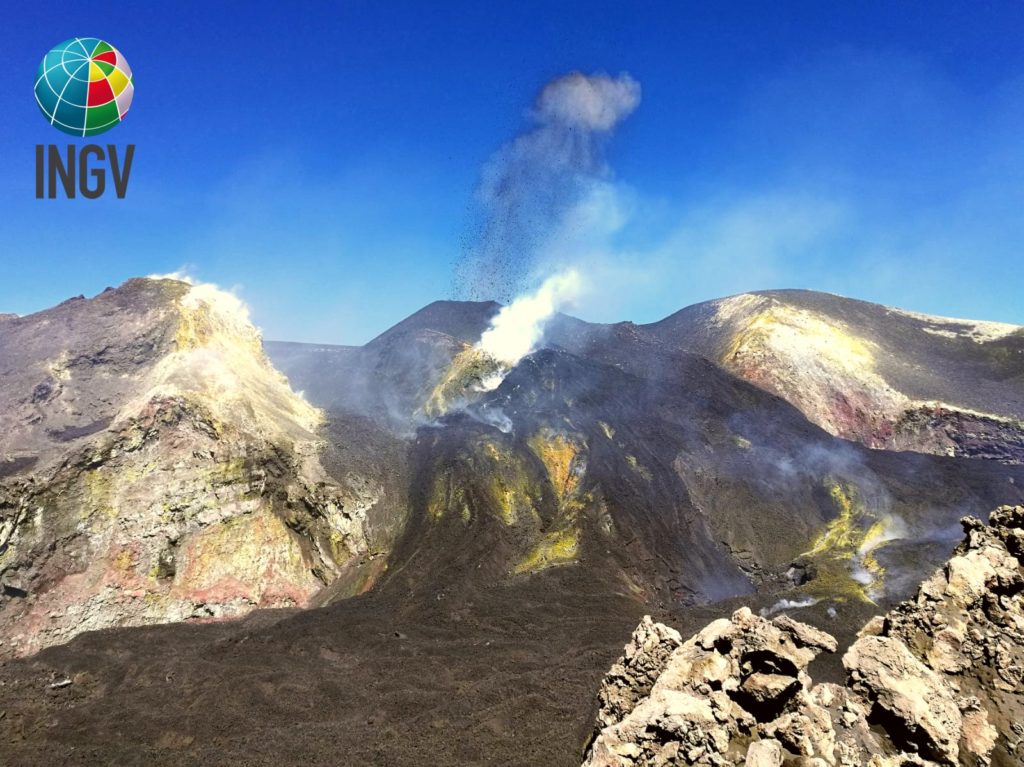 Surveillance cameras also show incandescences at the « saddle cone » of the New South-East Crater, which are caused by Strombolian activity in the duct, and an accentuation of the thermal anomaly, which characterizes this area from a time. At the same time, strombolian activity in the Voragine crater, which started in September 2019, continues with minor fluctuations.

PRESS RELEASE ON VOLCANIC ACTIVITY of April 17, 2020, 21:26:43 (UTC) – ETNA.
The National Institute of Geophysics and Volcanology, Etnean Observatory, reports that the monitoring networks recorded at 23:26 hours (21:26 UTC), a rapid variation of the parameters monitored.
In particular, there is an increase in the magnitude of the volcanic tremor. 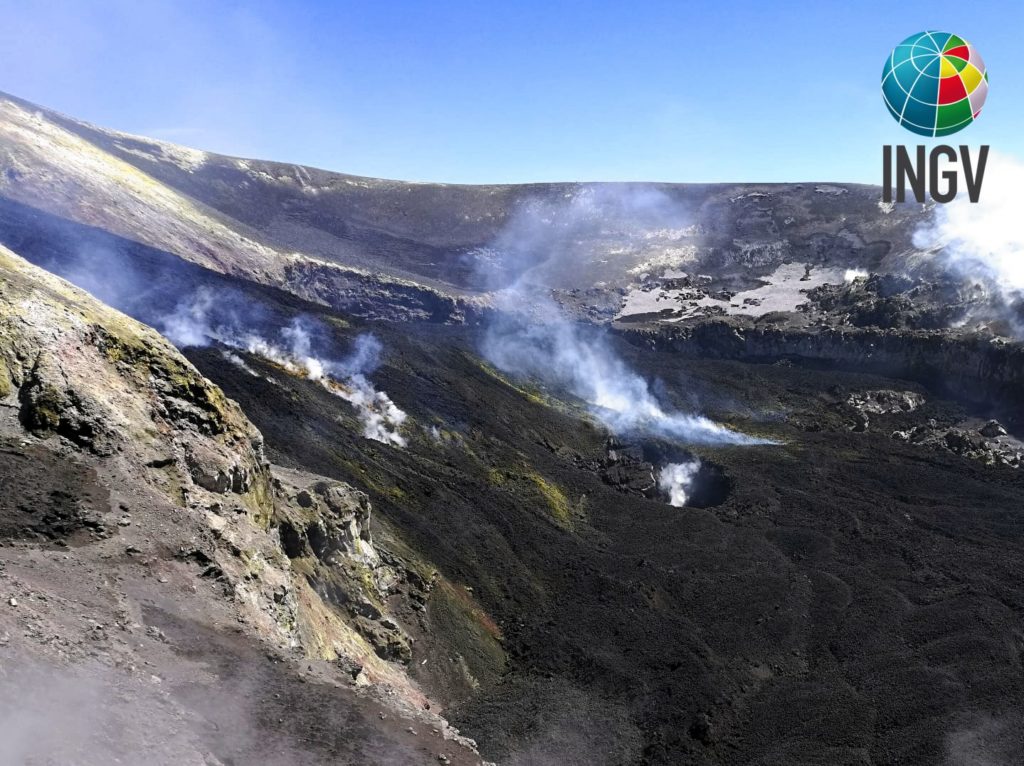 The photos above were taken during a location of INGV-Etnean Observatory staff in the summit area of Etna during the day  April 17, 2020. We can see that the Bocca Nueva crater has been again filled with lava emitted by the cone complex inside the Voragine crater. In addition, a new collapse hole is present (on the last photo) in the central part of the Bocca Nueva. Photo by Francesco Ciancitto, INGV-Etnéen Observatory.

Here we have the first clear evidence that the active vent is now fully protected from contact with seawater, and that lava has again been emitted. The reconstruction of Anak Krakatau has started! (Boris Behncke)

Level II activity level (Waspada) since March 25, 2019. The Anak Krakatau volcano (157 m above sea level) has experienced an increase in its volcanic activity since June 18, 2018, which was followed by a series eruptions in the period from September 2018 to February 2019. The last eruption occurred on April 11, 2020 with a strong column of eruption at a maximum of 2000 meters above the summit.

The volcanoes are clearly visible until it is covered with fog. The smoke from the crater is observed with a low intensity, white in color, about 50-100 meters high above the summit. The weather is sunny / rainy, the wind is light, oriented towards East and West. Through the CCTV93 camera located on the island, fine white smoke was observed at a height of 25 to 50 m. An eruption has occurred with a column of eruption of up to 50 m. 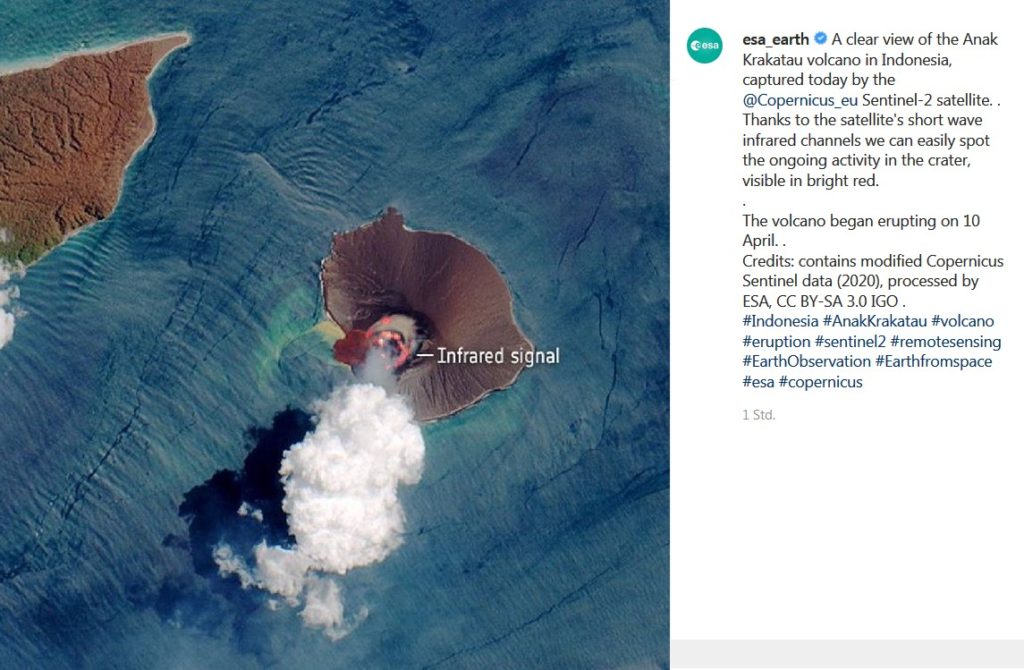 According to the seismographs of April 17, 2020, it was recorded:
2 eruption / explosion earthquakes
2 emission earthquakes.
8 low frequency earthquakes
1 shallow volcanic earthquake
4 Continuous tremors (Microtremor) with a maximum amplitude of 0.5 to 3 mm (Dominant value of 0.5 mm dominant)

DAILY REPORT OF THE STATE OF SANGAY VOLCANO, Thursday April 16, 2020.

Rains / lahars: According to satellite data, rains have been recorded in the area.

Emission / ash column: During the night, the descent of a lava flow was observed on the Southeast flank, activity recorded since May 2019. During the last hours the sector remained cloudy so there is no observation of surface activity.

Observations: During the night, a descent of lava flow was observed on the Southeast flank. Due to transmission problems with the reference station, daily seismic counting is impossible for the last 7 hours.

Activity:
Presence of white degassing fumaroles at an altitude of 4300 m, moving west and southwest. 5 to 11 weak explosions are generated per hour which eject columns of gray ash at a height of 4300 to 4700 m above sea level (14105-15420 feet) which are dispersed over 10 to 15 km towards the West and the Southwest .

During the hours of night and dawn, incandescent pulses were observed at 100 – 150 m high with weak to moderate avalanches around the crater, mainly in the ravines of Seca, Ceniza, Trinidad and Las Lajas. Low to moderate rumblings are perceived which cause weak shock waves causing vibrations in the houses of the volcanic perimeter. There are sounds similar to those of train locomotives with intervals of 2 to 4 minutes, as well as falls of fine particles of ash at Panimache I, Morelia, Santa Sofía, Palo Verde, Sangre de Cristo and others. 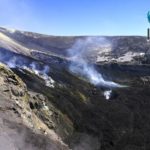 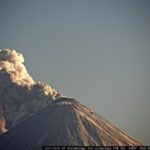