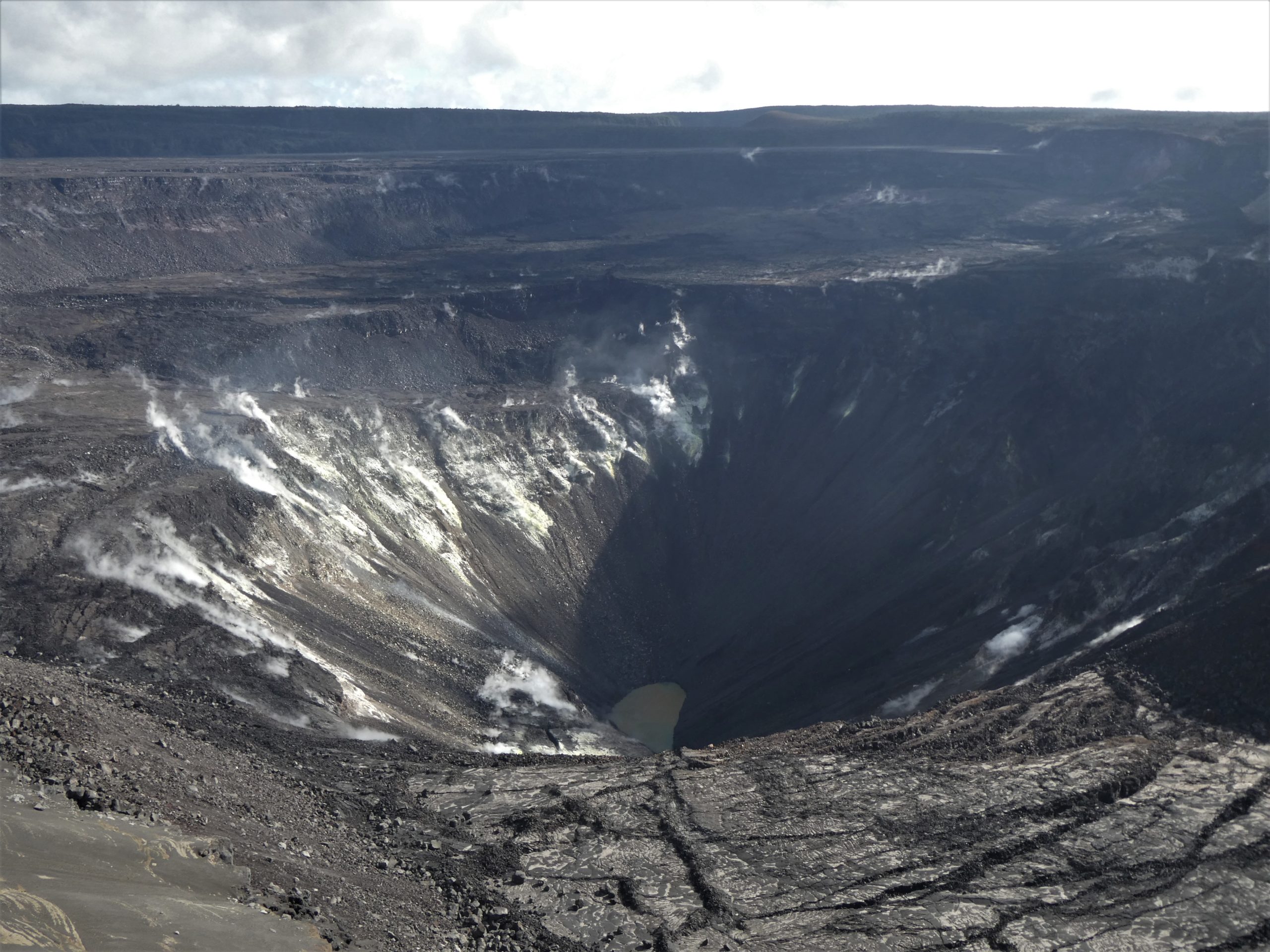 Activity Summary:
Kīlauea Volcano is not erupting. Monitoring data continue to show steady rates of seismicity and ground deformation, low rates of sulfur dioxide emissions, and only minor geologic changes since the end of eruptive activity in September 2018.

Observations:
Monitoring data have shown no significant changes in volcanic activity during November. Over the past month, about a dozen DI events occurred beneath the summit. Seismic stations detected over 1800 earthquakes in the vicinity of the volcano, which is an increase of ~10% from last month. Rates of seismicity are relatively consistent throughout the month, although at the summit, episodic increased rates appear to be coincident with the inflated phase of the DI events. Sulfur dioxide emission rates are low at the summit and are below detection limits at Puʻu ʻŌʻō and the lower East Rift Zone. The pond at the bottom of Halema’uma’u, which began forming on July 25, 2019, continues to slowly expand and deepen, and the most recent measurements are 162 meters in the east-west direction and 73 meters in the north-south direction. 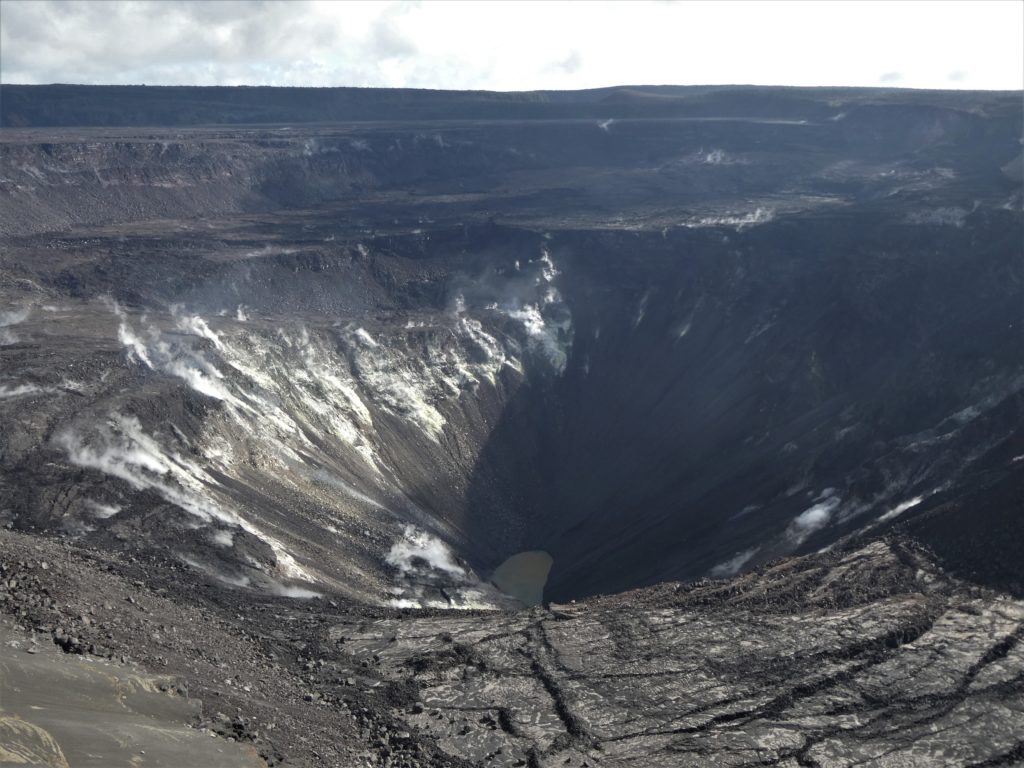 The water at the bottom of Halema‘uma‘u, a crater at Kīlauea’s summit, continues to slowly rise. During HVO’s early morning observations today, the southern portion of the crater was in shadow, but the water lake looked similar to previous days, with the water surface yellow-green in color and steaming distributed across the lake surface. USGS photo by M. Patrick.

SUMMARY OF THE STATUS OF ACTIVITY
In light of the surveillance data, we highlight:

1) VOLCANOLOGICAL OBSERVATIONS: During this period, a normal explosive activity of Strombolian type was observed accompanied by degassing activities. The hourly frequency of explosions fluctuated between mean values ​​(11 events / h on November 26) and high average values ​​(17 events / h on November 30). The intensity of the explosions was mainly medium to low in the North crater area and medium in the South Central crater area.
2) SISMOLOGY: The seismological parameters do not show any significant changes.
3) DEFORMATIONS: There is no significant change regarding permanent GPS and inclinometers networks.
4) GEOCHEMISTRY: The SO2 flux is at a medium-high level. The CO2 / SO2 ratio in the plume is at medium-low levels. The isotopic ratios of helium dissolved in thermal groundwater remain unchanged at moderately low values ​​(analysis of 18/11/2019).

On November 26, an investigation was carried out in the summit area, but the intense degassing prevented observations from being made inside the crater terrace. However, it was found that the explosive activity of the last 3 months has formed, on the Pizzo Sopra la Fossa, a layer of discontinuous ash with a thickness of between 5 and 10 cm, covering to a large extent the products of the paroxysmal events July 3rd and August 28th.

In the North Zone, the explosions mainly involved explosions of low intensity (less than 80 m high) and medium explosions (less than 150 m high) emitting coarse materials (lapilli and bombs). In many explosions, the projected products covered the outer slopes of the area facing the Sciara del Fuoco and some blocks rolled a few hundred meters before the mesa in place along the Sciara. The average frequency of explosions varied between 7 and 11 events / h. The explosive activity of the Center-South region resulted in explosions of coarse materials mixed with fine, medium intensity (less than 150 m in height). In some explosions, the products fell back into the upper part of the Sciara. The frequency of explosions in the Center-Sud zone varied between 4 and 8 events / h.

The volcanic unrest is continuing at Yasur. The volcanic activity is likely to continue at similar level, consistent with Volcanic Alert Level 2. The danger zone remains at 395 m around the eruptive vents. The Danger Zone for life safety is limited in the Permanent Exclusion Zone. 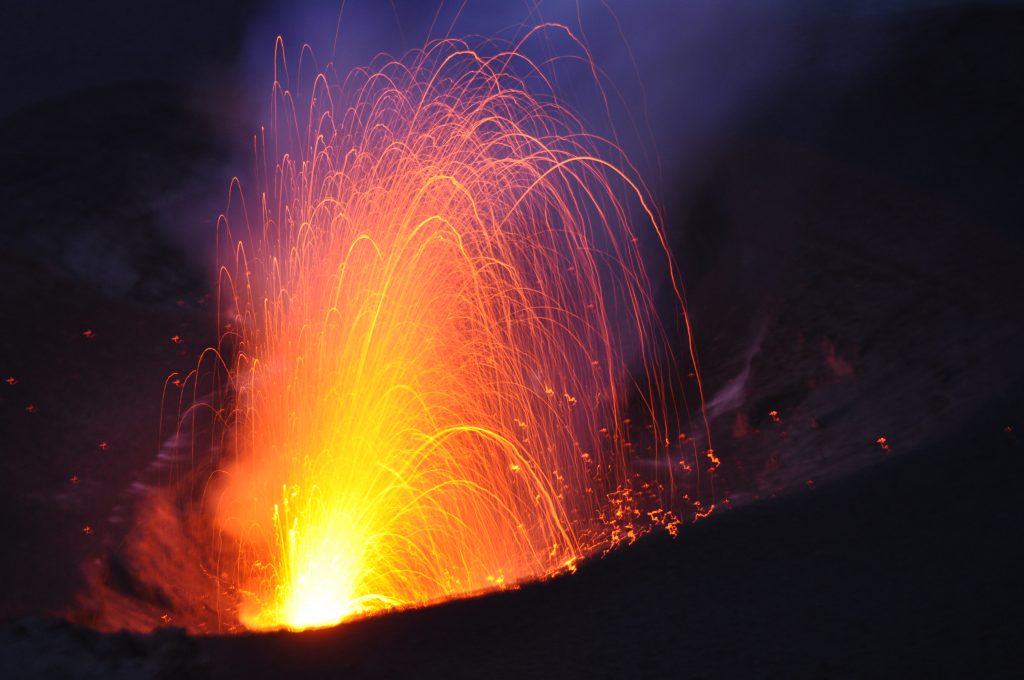 Latest observations and analysis of seismic data recorded from the monitoring network confirm a continuous volcanic activity in the level of major unrest state and is confined in the crater. The activity consists of ongoing explosions. Some explosions remain strong and volcanic bombs may fall in and/or around the crater. Eruptive vents may emit volcanic gases and/or ash clouds. Gas will be continue to be smell while approaching the caldera and crater.

Alert Level for Yasur has been at the Level 2 since 18th October 2016. The current observations are consistent with the Alert Level 2 activity. Level 2 indicates « Major Unrest; Danger Zone remains at 395 m around the eruptive vents » . 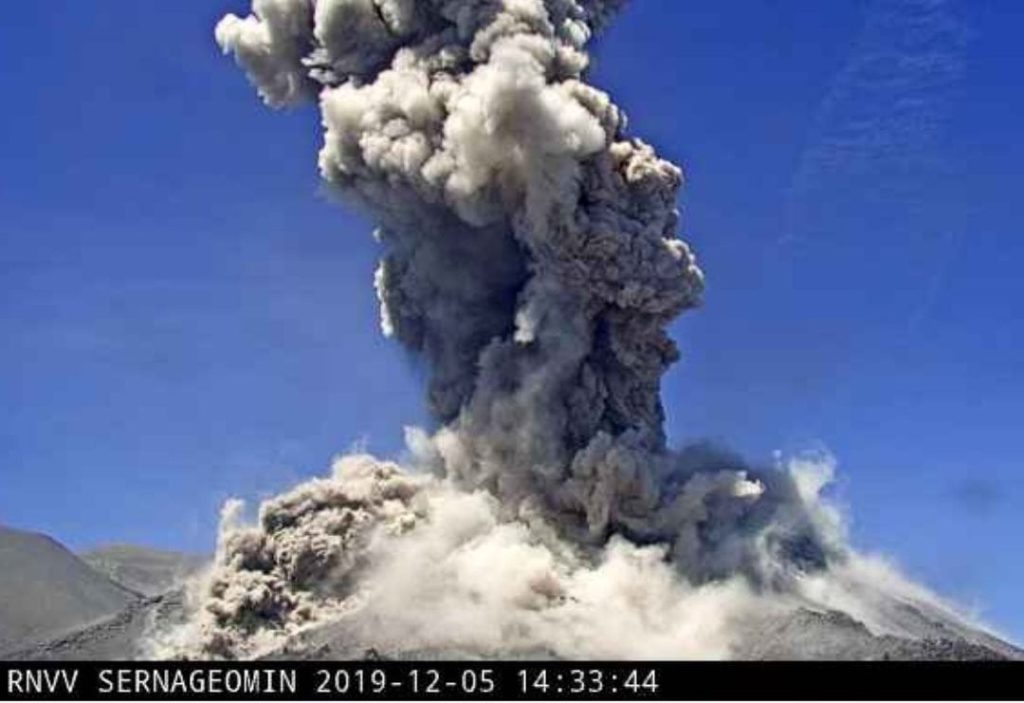 OBSERVATIONS:
The gas column associated with the explosion was approximately 1.6 km above the crater.
The volcanic technical alert is maintained at the ORANGE level.

An explosive activity was recorded, with pulsatile emission of gases and particles. During the night, it was possible to observe explosions with projection of incandescent volcanic material around the active crater.

– The network of GNSS stations which makes it possible to measure the deformation of the volcanic complex, continues to record an inflationary process, highlighted by the lengthening of the control lines crossing the active crater and the altitude of the 5 monitoring stations. The largest vertical deformation is recorded at the nearest active crater station (1.5 km) and is recorded at 8.0 ± 0.4 cm, at an average speed of 1.8 ± 0.3 cm / month for the last 30 days. The elongation rates of the control lines recorded a maximum rate of 0.8 ± 0.05 cm / month for the last 30 days.

– In the crater Nicanor, there is an explosive activity since 4 centers of emission. The associated activity is the descent of pyroclastic flows which advanced of 1100m in direction East and 40m in direction South. No advance of the lava flows previously described (L1, L2 L3 and L4) has been observed.

It was recorded, from the surveillance camera of Andarivel / Portuzelo, the descent of a pyroclastic flow towards West, with 400m of extension. 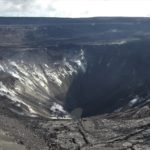 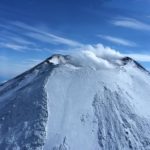