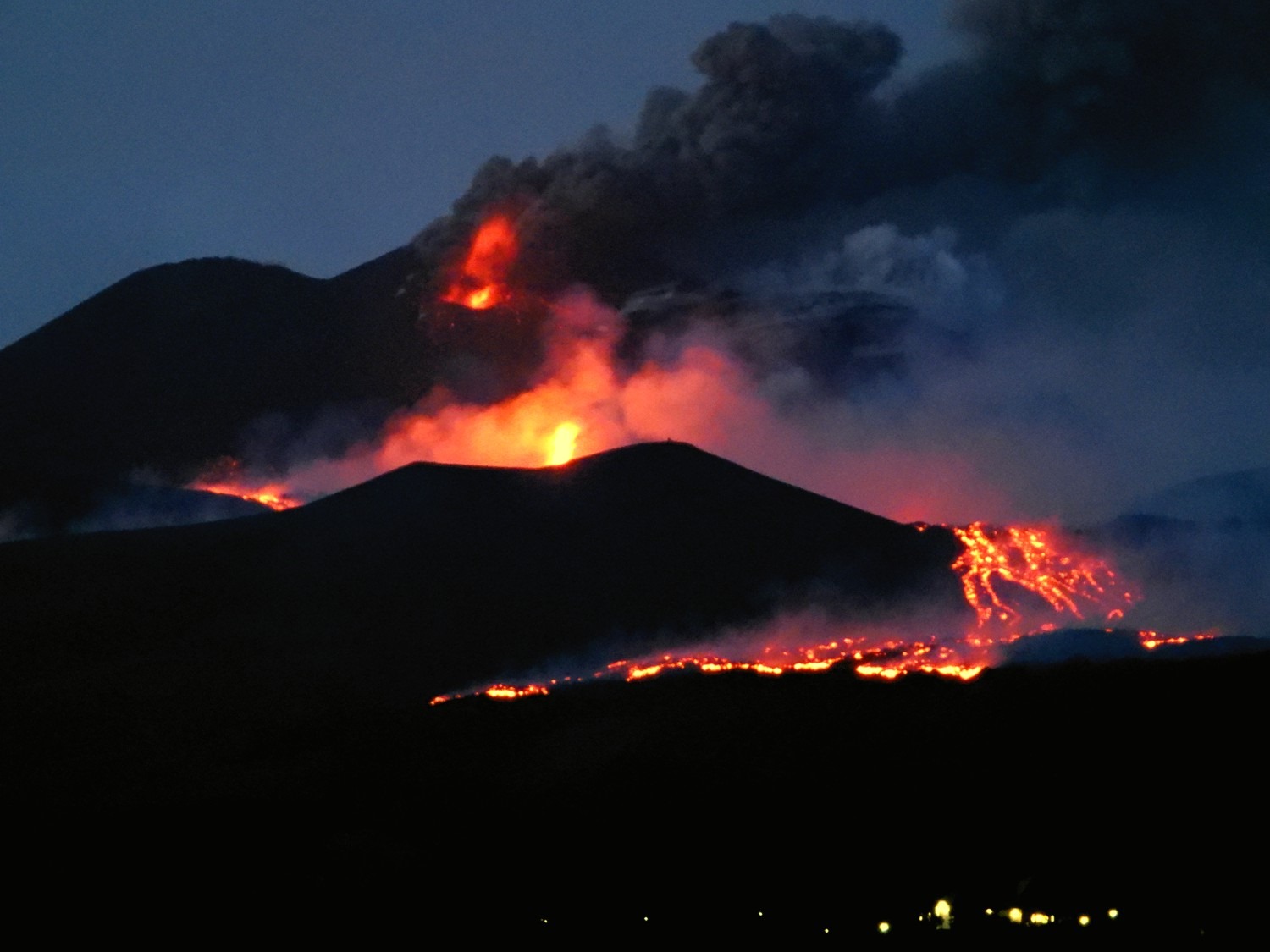 The Osservatorio Etneo, Instituto Nazionale di Geofisica e Vulcanologia, Osservatorio Etneo, indicates that at 08:15 UTC, the surveillance cameras of the INGV show gas emissions from the base of the southern flank of the new south-east crater (NSEC), indicating that a new eruptive vent has opened. 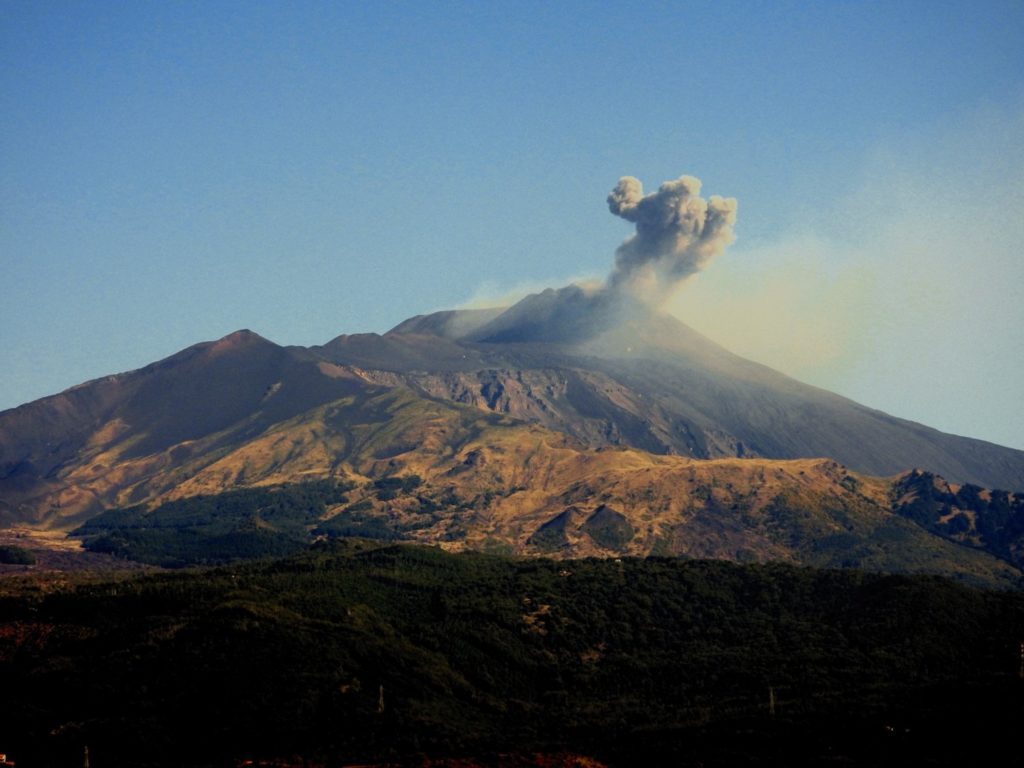 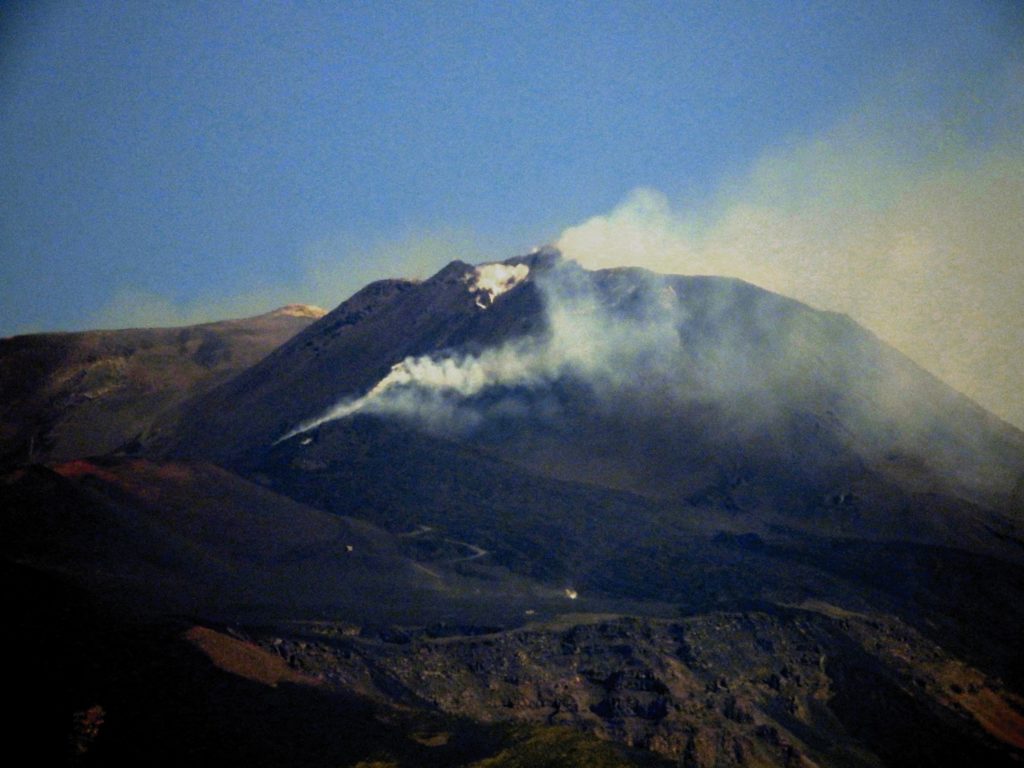 This morning, an eruptive crack opened at the south base of Etna’s New Southeast Crater (NCSE). The phenomenon was preceded and accompanied by the gradual increase of the average amplitude of the volcanic tremor. For a few tens of minutes, an intense explosive phase began, located at the top of the NCSE, forming a gaseous plume rich in ash pushed by the wind on the eastern quadrants of the volcano. For the moment, the staff of the INGV carries out field surveys in order to follow the evolving eruptive phenomenon.

The National Institute of Geophysics and Volcanology, Osservatorio Etneo, announces that the monitoring and control systems of the INGV-OE have detected from 5:30 am a sudden increase in the average amplitude of volcanic tremor. This increase continued steadily until, at 08:15 UTC, the surveillance cameras revealed intense gas emissions from the base of the south side of the New Southeast Crater and marking the opening an eruptive mouth. As of 0920 UTC, there was a further increase in the average amplitude of volcanic tremor, accompanied by explosive activity located on the New Southeast Crater, which resulted in the formation of a rich ash plume that was dispersed, driven by the wind, on the eastern quadrants of the volcano, at a maximum altitude estimated at about 4500 meters above sea level. 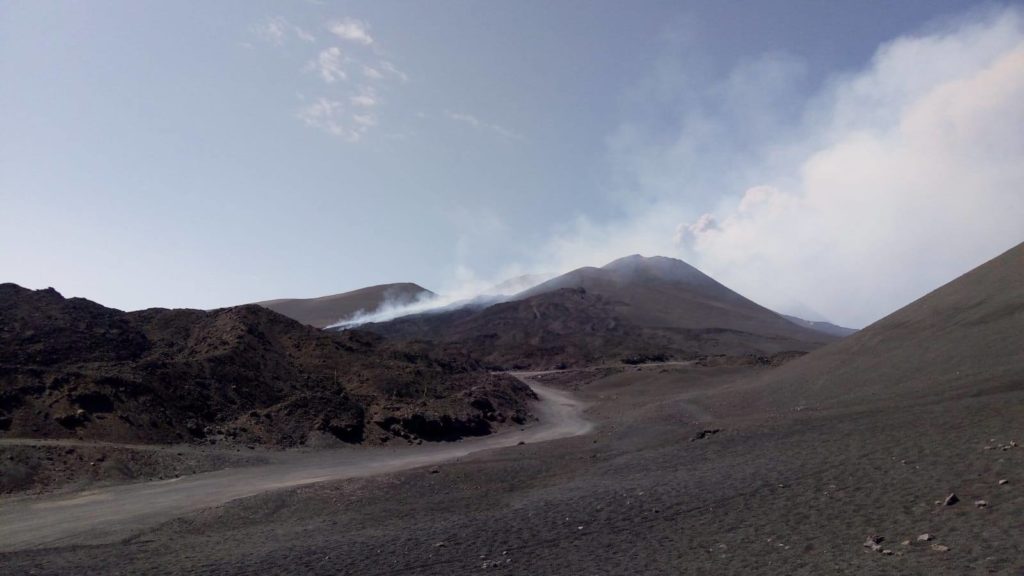 At 11:10 UTC, the INGV personnel intervened in the field, which showed that the explosive activity affects the entire extension of the eruptive fissure, which extends from the NSEC summit to its southern base. The explosions succeed each other without interruption and generate high emissions of volcanic ash. From the southern part of the eruptive crack emerges a lava flow that extends to the southwest and the south. At 1135 UTC, the most advanced lava front had reached and passed the northern base of the Barbagallo Mountains, at an altitude of about 2850 m, extending further into the area between the Monte Frumento Supino and the cones. pyroclastics from 2002-2003. 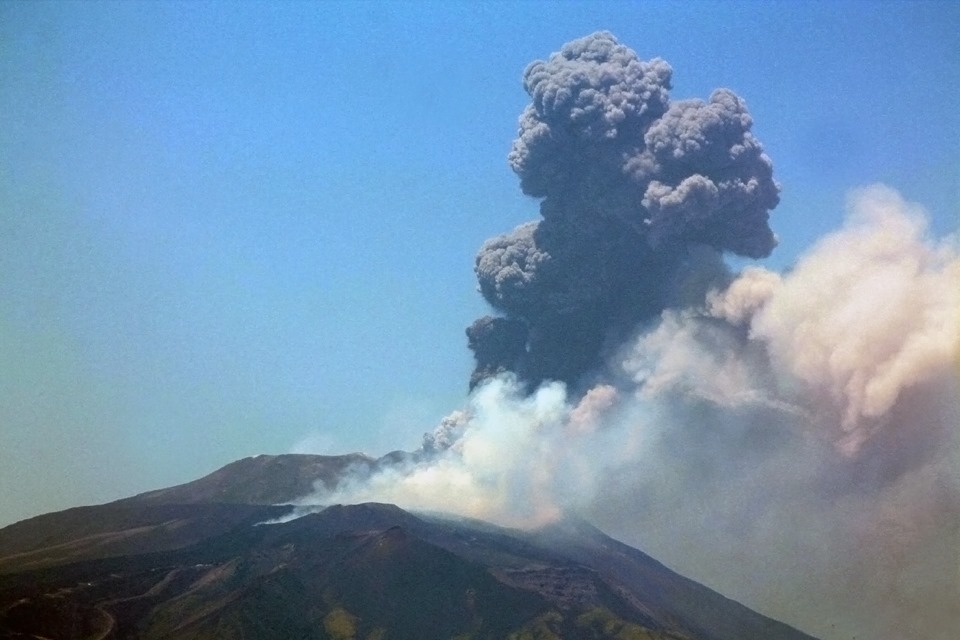 With regard to the deformations, slight variations of inclination occur at the stations at the top of Crater Del Piano (about 2 microradians) and Pizzi Deneri (a few tenths of microradiant). GPS stations do not show any significant changes.
At around 14:00 UTC, the INGV team in the summit area indicates that the lava flow is well fed and is developing rapidly, with a front advancing rapidly towards the valley, after having passed the 2002-2003 pyroclastic cones ( 2nd photo).

At 12:21 h UTC (14:21 local time), a sequence of powerful explosions occurred at the New Southeast Crater (NSEC) of Etna, producing an ash cloud that rose to 8 km altitude above sea-level. At the same time, eruptive activity continued without significant variations at the nearby area of the « saddle cone » (active in January-April 2017), and on the south flank of the NSEC. The images below show the ash cloud generated by the explosion seen from Tremestieri Etneo (south flank of Etna), and an image of the first explosion recorded by the thermal surveillance camera at the Montagnola (EMOT).
Eruptive activity at the « saddle cone » and on the south flank of the NSEC is continuing in the moment of this post. 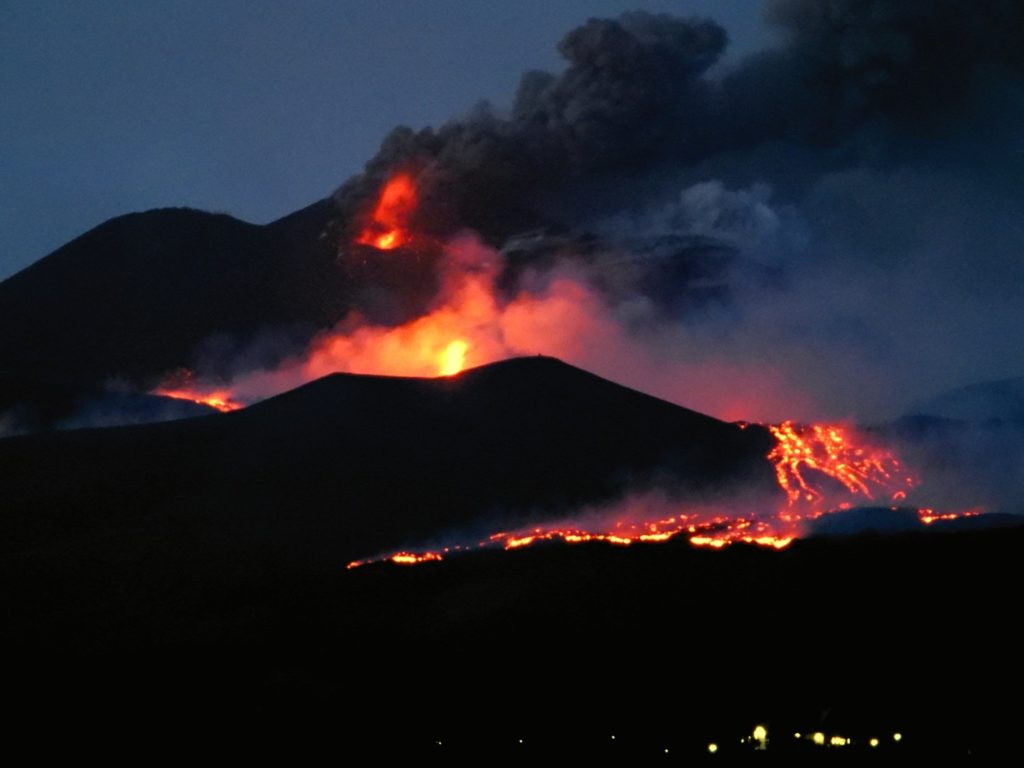 This is what last night’s eruptive theater looked like from the Milia region above Ragalna. Explosive activity from two mouths immediately below the so-called « cone of the saddle » (active between January and April 2017), and « projection » and lava emission activities of two fractures on the South and Southwest flank of the new crater of the Southeast. This activity is similar to some eruptive episodes from March-April 2017, but the most advanced lava flow developed much more rapidly between the 2002-2003 cone (Monte Barbagallo) and the old cone of Monte Frumento Supino, center in the photo).

Level of  activity at level I (Normal). G. Tangkuban Parahu (2084 m altitude) erupted on July 26, 2019 at 15:48:18, with ash column height observed at ± 200 m above the summit (± 2284 m above sea level). The ash column was observed thick, blackish-gray, leaning to the northeast and south. This eruption is recorded on a seismogram with a maximum amplitude of 50 mm (off scale) and a duration of ± 5 minutes 30 seconds.
Since yesterday and until this morning, the volcano was clearly visible. It was observed that crater smoke was white to gray with a low to moderate intensity and an altitude of 50 meters above the summit. 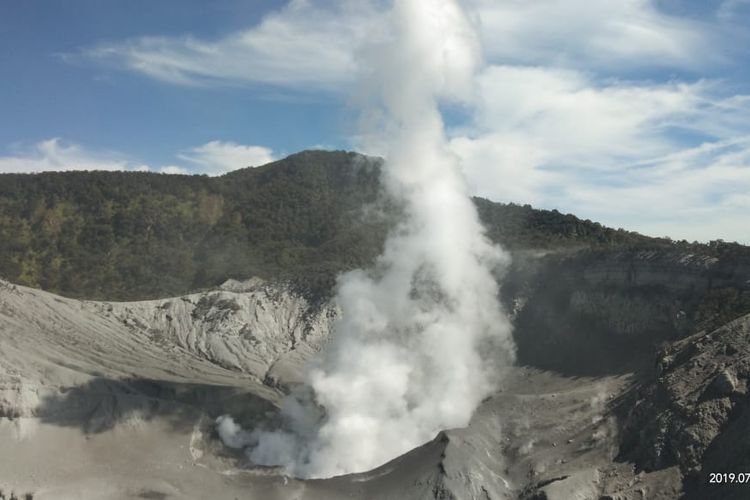 VONA: The latest ORANGE color code sent by VONA was issued on July 26, 2019 at 4:35 pm and concerned the observation of volcanic ash emissions at 3:48 pm, with ash column height at approximately 2,284 m above sea level or about 200 m above the summit. The ash column was moving north-east and south.

I. RESULTS OF OBSERVATION
Visual
The weather around Mount Merapi is generally sunny in the morning while the evening is cloudy and foggy. There is a white smoke, thin to thick with low pressure. The maximum smoke height of 70 m was observed from Mount Merapi observation post in Kaliurang on 24 July 2019 at 06:00.
The morphological analysis of the crater area based on photographs of the Southeast sector revealed no significant morphological changes. The volume of the lava dome is based on an analysis of aerial photographs with drones of 4 July 2019 totaling 475 000 m3. Since January 2019, the volume of the lava dome has been relatively constant due to the fact that most magma extrusions collapse directly into the upper parts of Kali Gendol as avalanches and hot clouds.
During this week, there were 4 avalanche clouds with a maximum slip distance of 1,100 meters leading to the headwaters of Kali Gendol. 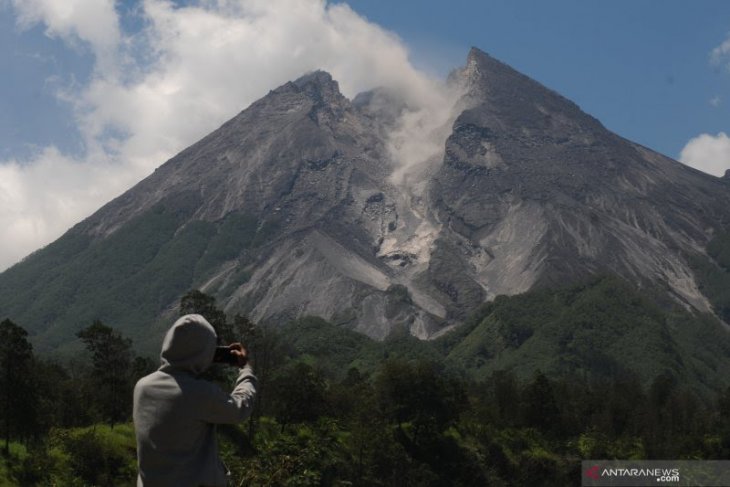 Rain and lahars:
This week, there were no reports of rain, lahars or flow increases in the streams and rivers downstream of the Merapi.

II. CONCLUSION:
Based on the results of the visual and instrumental observations, it was concluded that:
1. The lava dome is currently in a stable state with a relatively low growth rate.
2. The volcanic activity of Mount Merapi is still quite high and is at the activity level « WASPADA ».

Taal Volcano’s seismic monitoring network recorded ten (10) volcanic earthquakes during the 24-hour observation period. Field measurements on 25 July 2019 at the western sector of the Main Crater Lake yielded a decrease in water temperature from 33.4°C to 33.0°C, an increase in water level from 0.08 meter to 0.30 meter, and an increase in acidity from a pH of 2.90 to 2.88. Ground deformation measurements through precise leveling surveys from 15 – 24 June 2019 indicated slight inflation of the edifice consistent with recent results from continuous GPS data. 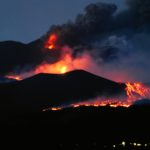 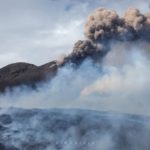