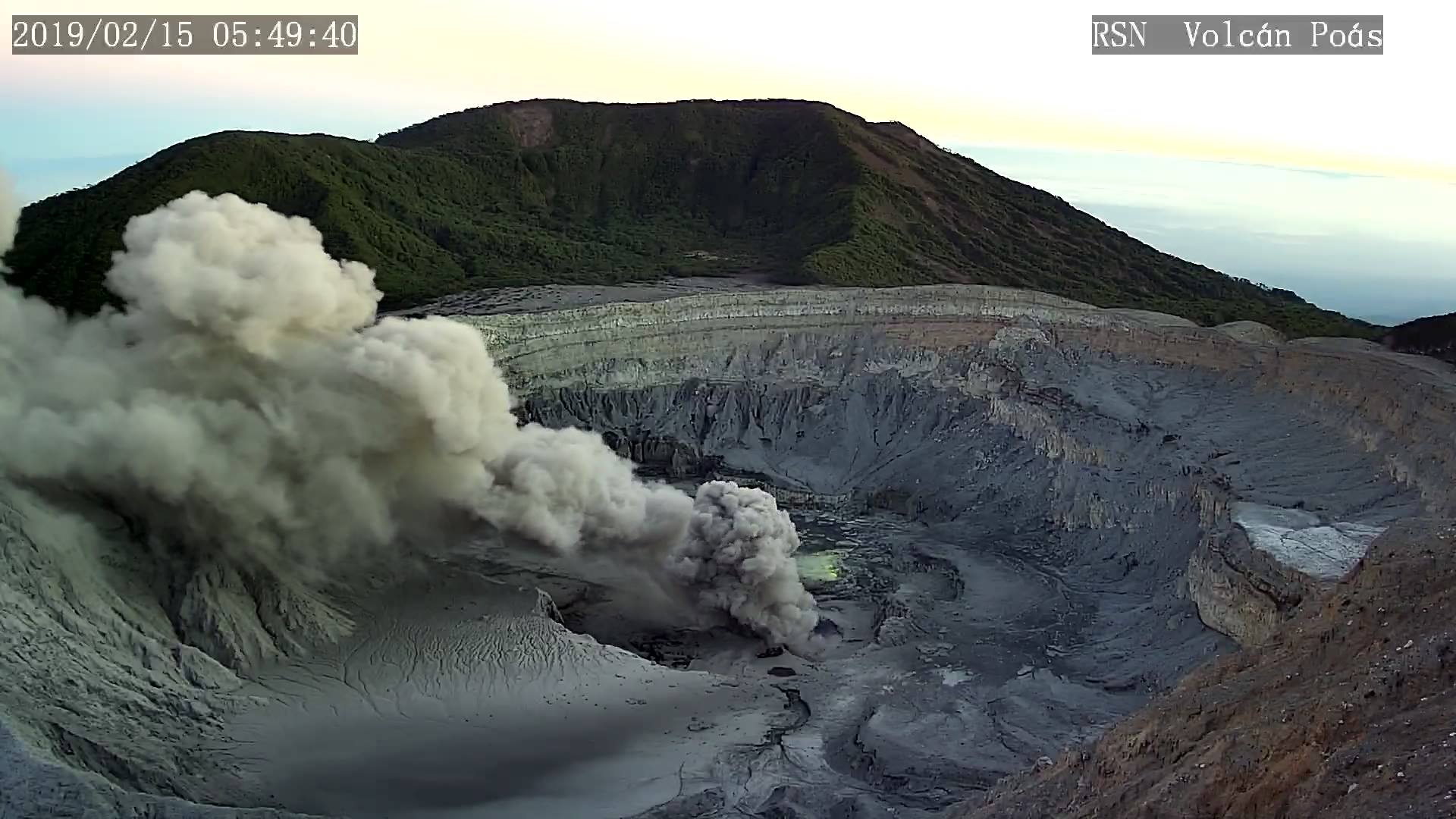 Piton de la Fournaise: transition to alert 1 – likely eruption in the near future
Updated on 16/02/2019

Since 15:21 local time (the 16/02), a seismic crisis is recorded on the instruments of the volcanological observatory of Piton de la Fournaise. This seismic crisis is accompanied by rapid deformation, indicating that the magma is leaving the magma reservoir and spreading to the surface.
An eruption is likely in the near future in the next minutes or hours. 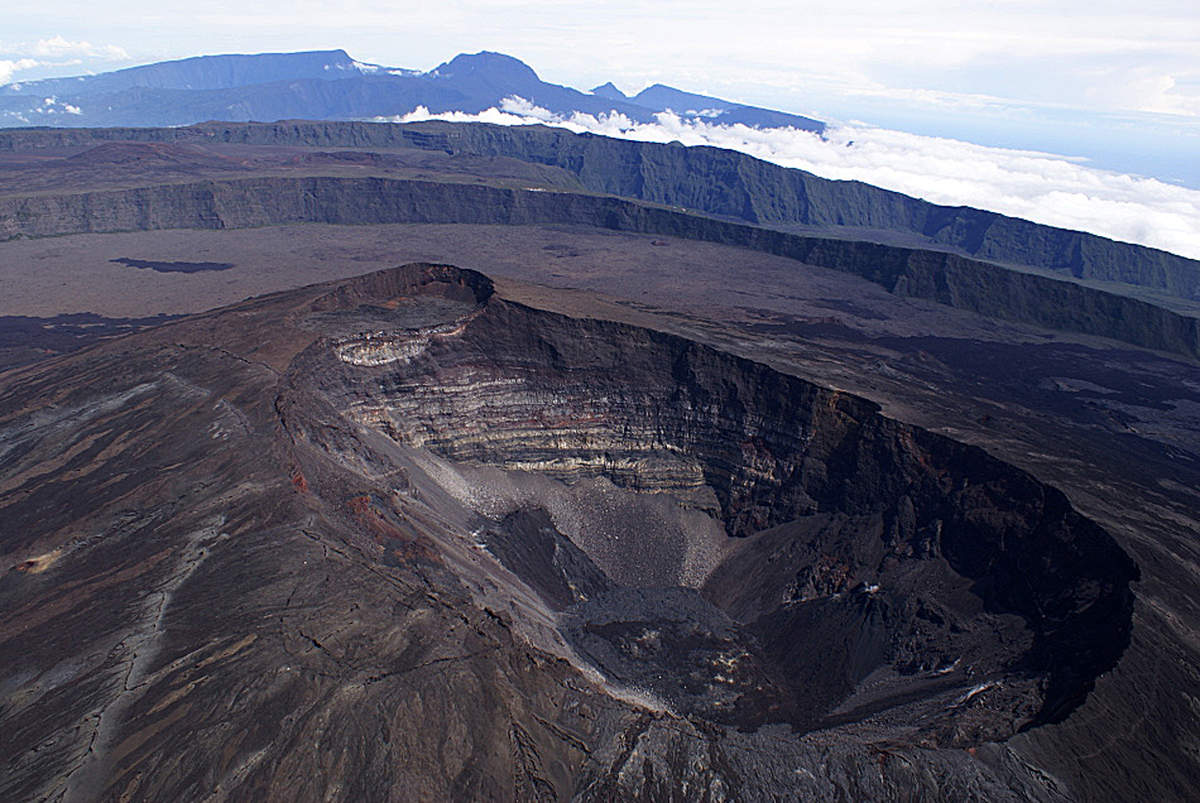 Under these conditions, the prefect decided to implement the alert phase 1 « likely eruption » of the specific device ORSEC * volcano as of today at 16:30.
As a result, public access to the upper part of the Piton de la Fournaise enclosure, whether from the Pas de Bellecombe trail or from any other trail is prohibited. It is recalled that the landing of aircraft in the area of the volcano is regulated and subject to authorization from the Prefecture.
The National Gendarmerie and the National Forestry Office have been tasked to ensure the implementation of these security measures on the site.

This Sunday morning, the Observatory records « a small seismicity ». « It always shows that we always have the roof of the tank which is weakened, » continues Aline Peltier who considers three hypotheses. « There may be a new injection of magma to the surface, a magma spread from the reservoir to the surface, or it may stop. »
« We know that there is some magma in the reservoir and that it will have to come out someday. » This reservoir is becoming fragile, so we expect a probable eruption in the short to medium range. deadline, « concludes the management of the Volcanological Observatory.
Yesterday, while the prefecture triggered the device ORSEC volcano, the Observatory and the prefecture of Reunion considered an « eruption in the minutes or the hours to come ». Finally, it seems that this first eruption of the year is desired.

Once eruptive activity Sierra Negra volcano, located on Isabela Island of the Galapagos province, which occurred between June 26 and August 15, 2018 ended, and to continue the research and monitoring of the volcano Sierra Negra, technicians, from January 31 to February 10, 2019 of the Institute of Geophysics of the National Polytechnic School (IG-EPN) conducted a new monitoring campaign using a Scintrex CG-5 microgravimeter. Measurements of SO2 gas by FLYSPEC in the region of Minas de Azufre, the Southwest sector of the Sierra Negra volcano were also carried out 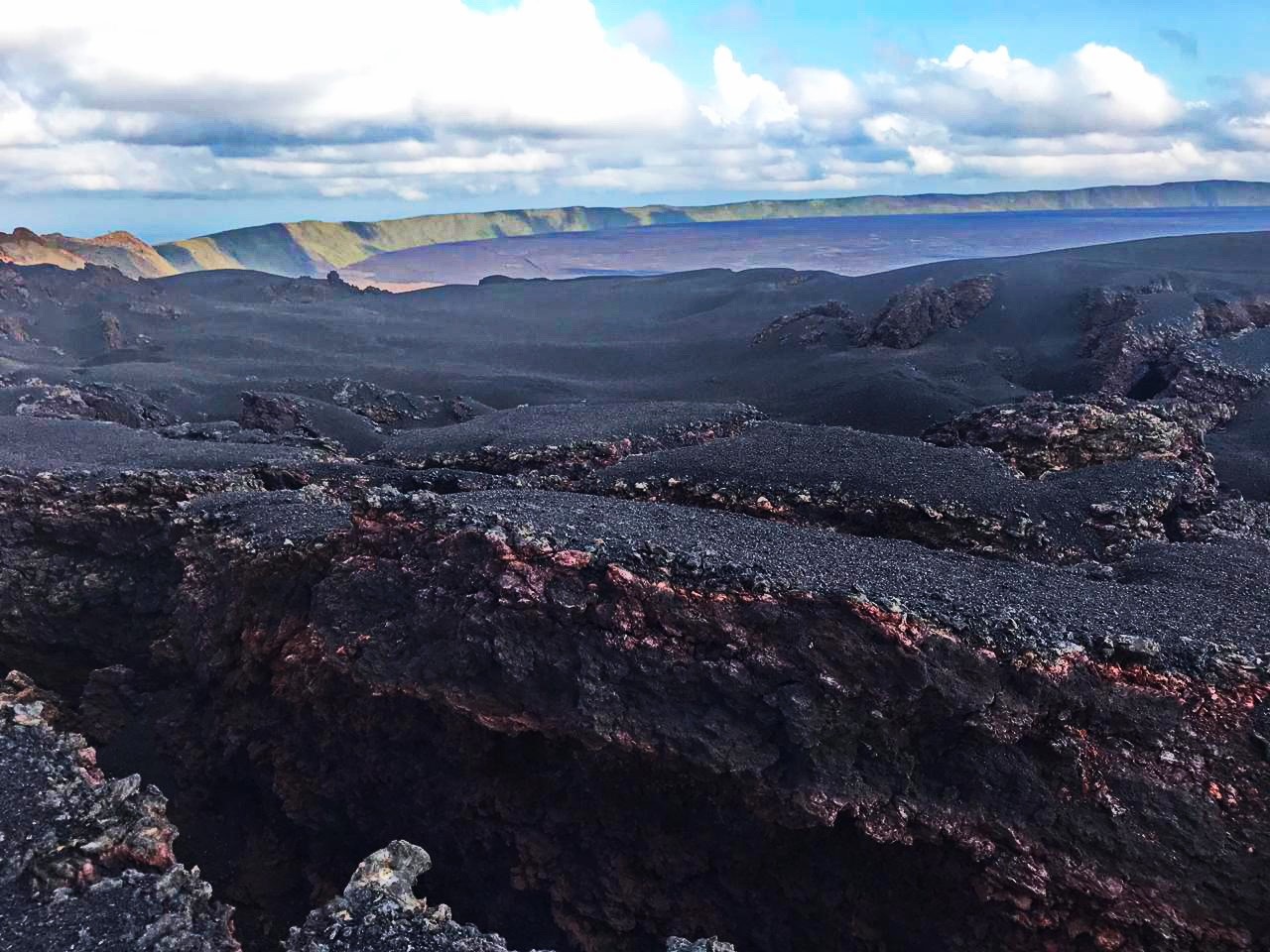 Fig. 1: Southeastern part of the caldera of the Sierra Negra volcano seen from the North, with open cracks during the eruptive process of 2005. The vertical distance between the bottom of the caldera and the edge is 100 meters. (Photos: E. Gaunt IG-EPN).

The campaign conducted in the vicinity and inside the Caldera of the Sierra Volcano consisted of a total of 8 routes with several measuring points located in the central part of the caldera and on its flanks North, Northeast, East and South -Where is. The objective was to measure the local gravitational field, associated with the recent eruptive process of the volcano. Using the microgravimeter, we can perceive the minute variations in gravity associated with mass changes produced during the eruptive process of a volcano 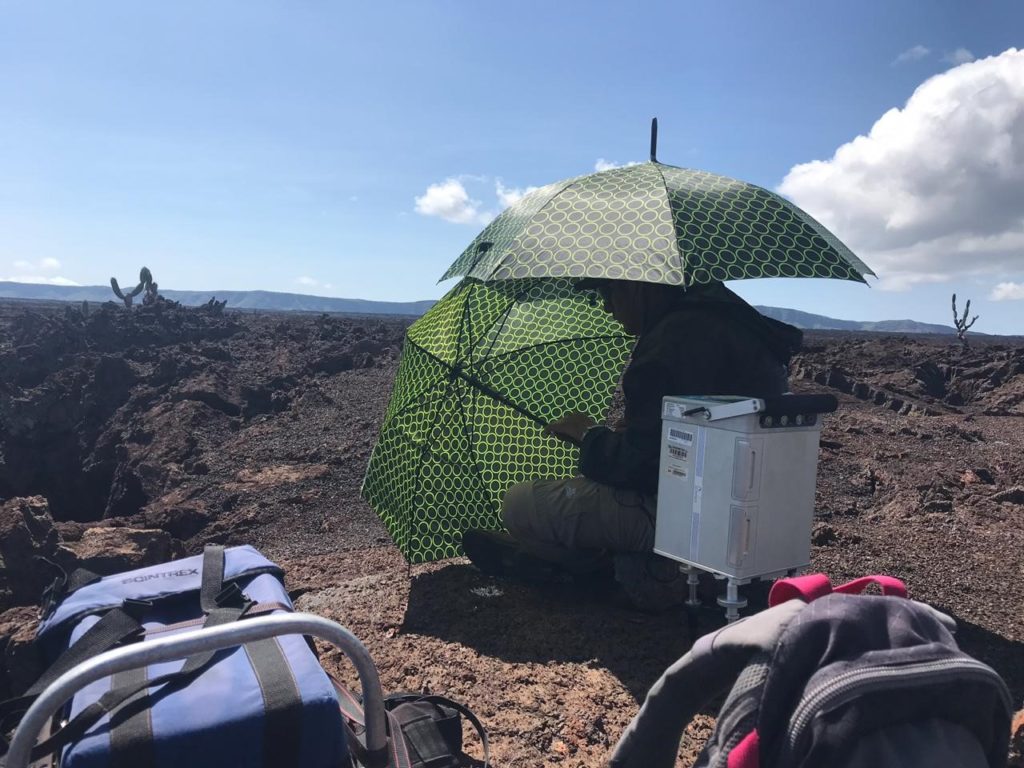 Fig. 2: Staff of the Geophysical Institute performing micro-gravimeter measurement inside the caldera of the Sierra Negra volcano, umbrellas cover the gravimeter to reduce the effects of wind and sun. (Photo: E. Gaunt IG-EPN)

On the other hand, in the southwestern part, measurements were made on the amount of SO2 emitted by the fumaroles of « Minas de Azufre » through FLYSPEC. 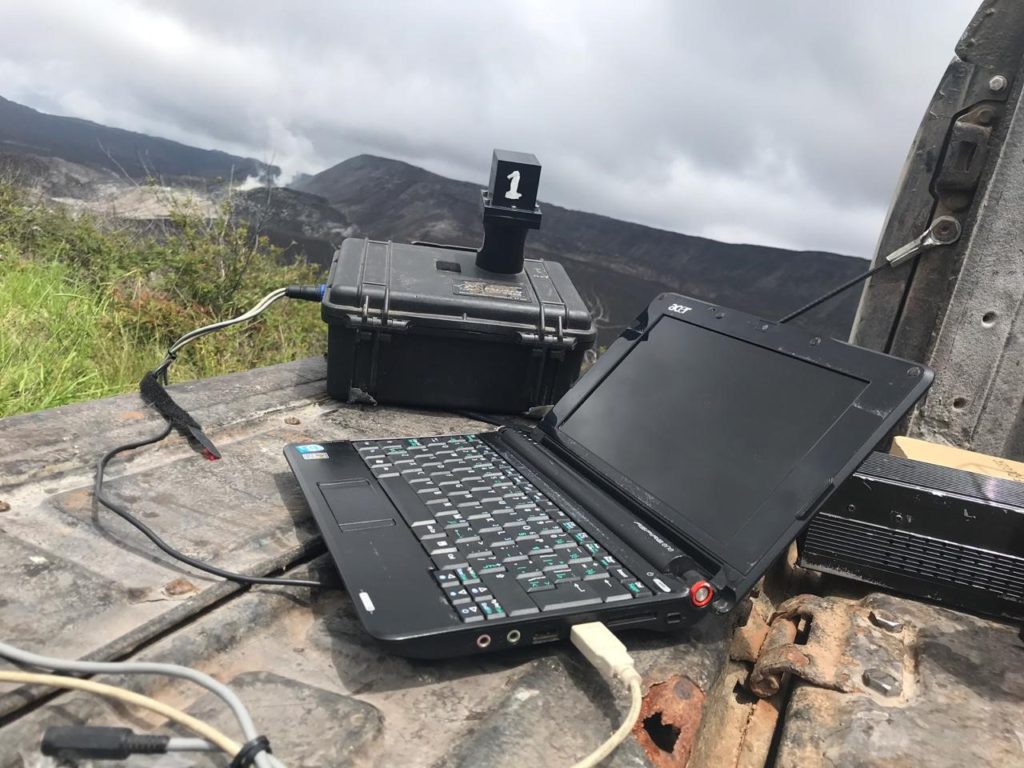 Figure 3. FLYSPEC measurement of the amount of SO2 emitted by the « Minas de Azufre » fumaroles located in the southwestern part of the Sierra Negra volcano (photographs: E. Gaunt IG-EPN).

The Geophysical Institute of the National Polytechnic School ensures the permanent monitoring of the volcanic activity presented by the Sierra Negra volcano and inform without delay of any anomaly found.

Poas Volcano:
Since February 8, 2019, there has been a continuous eruption on the Poas volcano, with a column that rises to 1000 meters altitude and 3708 meters above sea level. (meters above sea level, 12162.24 ft).
The seismic activity is similar to that of yesterday.
At the time of this report, winds are blowing from the southwest. 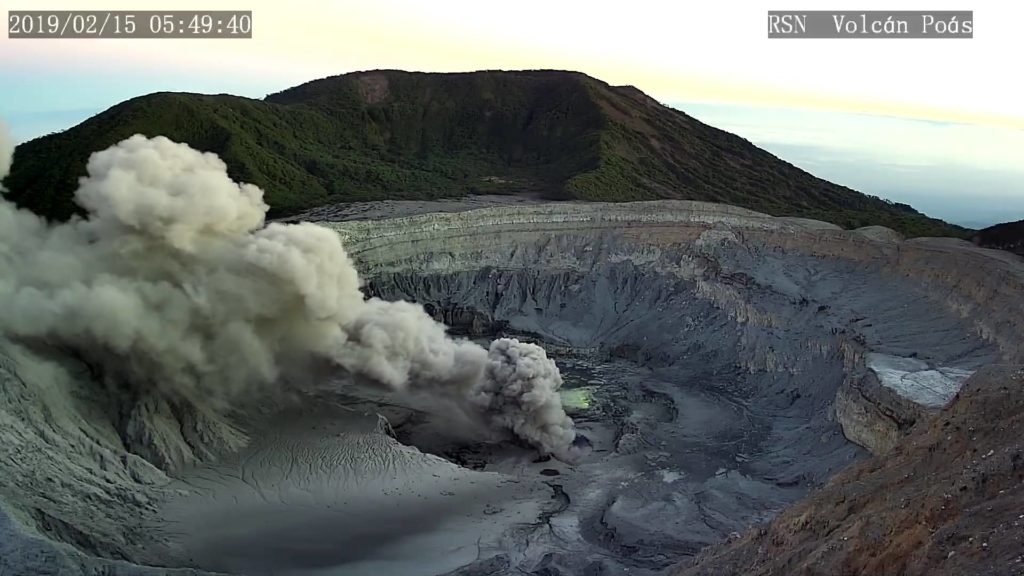 The eruption of the Poás volcano continues with a continuous emission of ashes. Intensity fluctuations are noted, but in general the monitored signals remain stable. Seismicity is low with tremors of low amplitude. Gases have low and stable CO2 / SO2 and H2S / SO2 ratios

Turrialba Volcano:
On February 15, 2019, at 0834 local time, there was an eruption on the Turrialba volcano, with a column rising 300 meters above crater height and 3640 meters above sea level. (meters above sea level, 11939.2 ft).
Duration of the activity: minutes.
The seismic activity is similar to that of yesterday.
At the time of this report, the winds are blowing westward. 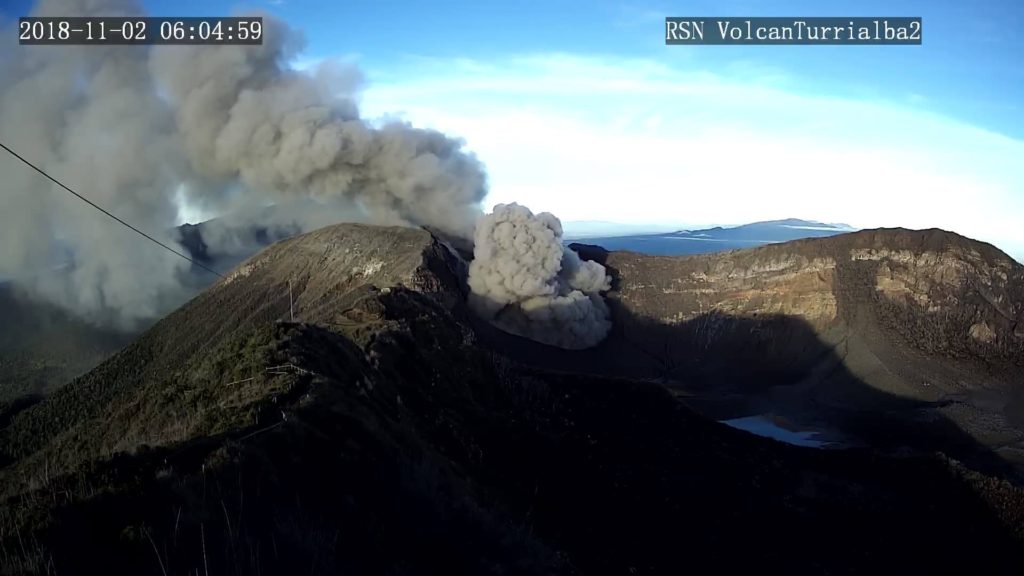 Eruptive activity on the Turrialba volcano continues with almost constant ash emissions. The emission is low energy with several pulses a little more energy that produce denser ash columns. Seismicity shows the LP type signals and the most energetic eruptions are associated with infrasound signals.

The periodic presence of micro-earthquakes, combined with an increase in seismic vibrations and the outgassing of the Chaparrastique volcano, shows a significant increase in activity from 9 February this year. Signals obtained from the network of seismic stations monitoring the volcano recorded various periods of seismic vibration (tremors with bands) of amplitudes reaching 280 RSAM units per mean hour, exceeding the threshold of 150 units.

In the last few hours, the seismic vibration of the San Miguel volcano has fluctuated between 205 and 263 average RSAM time units. These are prolonged seismic signals related to changes in fluid pressure in the volcanic building, indicators of a clogged channel and greater activity of the Chaparrastic volcano. 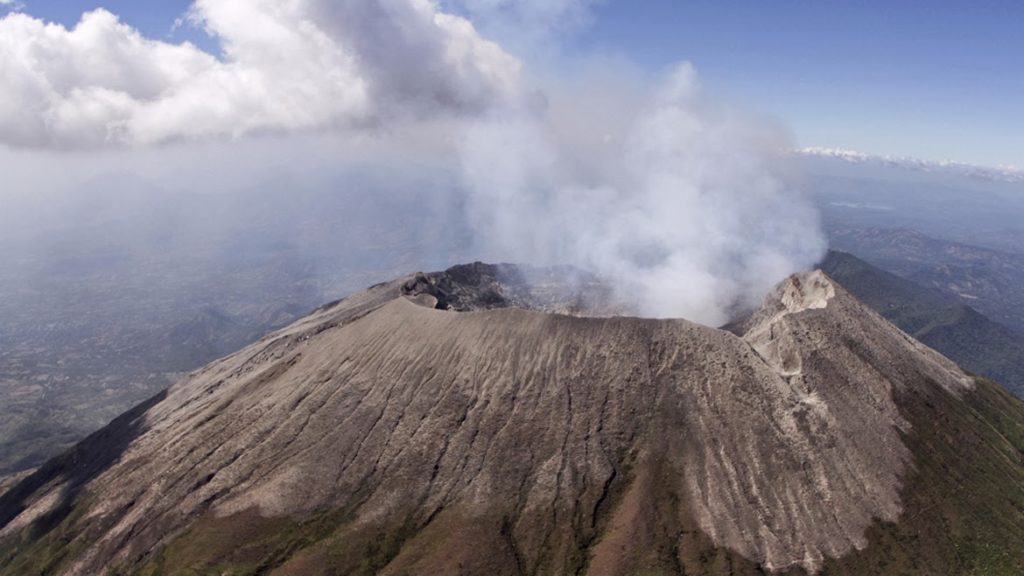 Special report 2. Continuation of the activity of the Chaparrastic volcano.

The recording of tremors or above-normal seismic vibrations on the Chaparrastique volcano persists, indicating a movement of magmatic fluids in the interior.
During the last 24 hours, the values of the seismic vibration (RSAM) of the Chaparrastic volcano remained fluctuating between 153 and 207 units, with an average hour of 182 units (Figure 1), when the normal threshold is 150 units. That is, above what is established as normal, observing a downward trend

Figure 1. Behavior of seismic volcano vibrations recorded during the last week. Note the rise from 9 pm on Monday, February 11th.

Figure 3. An apparently quiet volcano is observed without the presence of a gas plume in its crater. Cloudiness is typical of weather conditions.

The Ministry of Environment and Natural Resources (MARN) continues the systematic monitoring of the volcano and maintains close communication with the Directorate General of Civil Protection and local observers.
In addition, he calls on the general population to stay away from the top of the volcano, as sudden changes in behavior often occur.
If the activity does not evolve, the next report will be published on Monday, February 18, 2019. 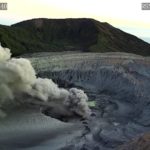 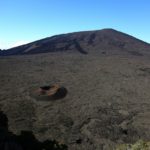