Lava continues to erupt from Fissure 8, with vigorous fountains reaching heights of about 200-220 feet. Observers on the late afternoon overflight reported no significant changes in the Fissure 8 flow field, which continues to supply lava to the ocean entry at Kapoho. Two vigorous steam plumes are rising from the ocean flow front and being blown inland. Strong thermal upwelling was noted in the ocean extending up to 1000 yards out to sea from the visible lava front. Heavy gas and steam emissions were noted at fissures 9 & 10, but lava emission is occurring only at Fissure 8.

Pele’s hair and other lightweight volcanic glass from high fountaining of Fissure 8 are falling downwind of the fissure and accumulating on the ground within Leilani Estates. High winds may waft lighter particles to greater distances. Residents are urged to minimize exposure to these volcanic particles, which can cause skin and eye irritation similar to volcanic ash. 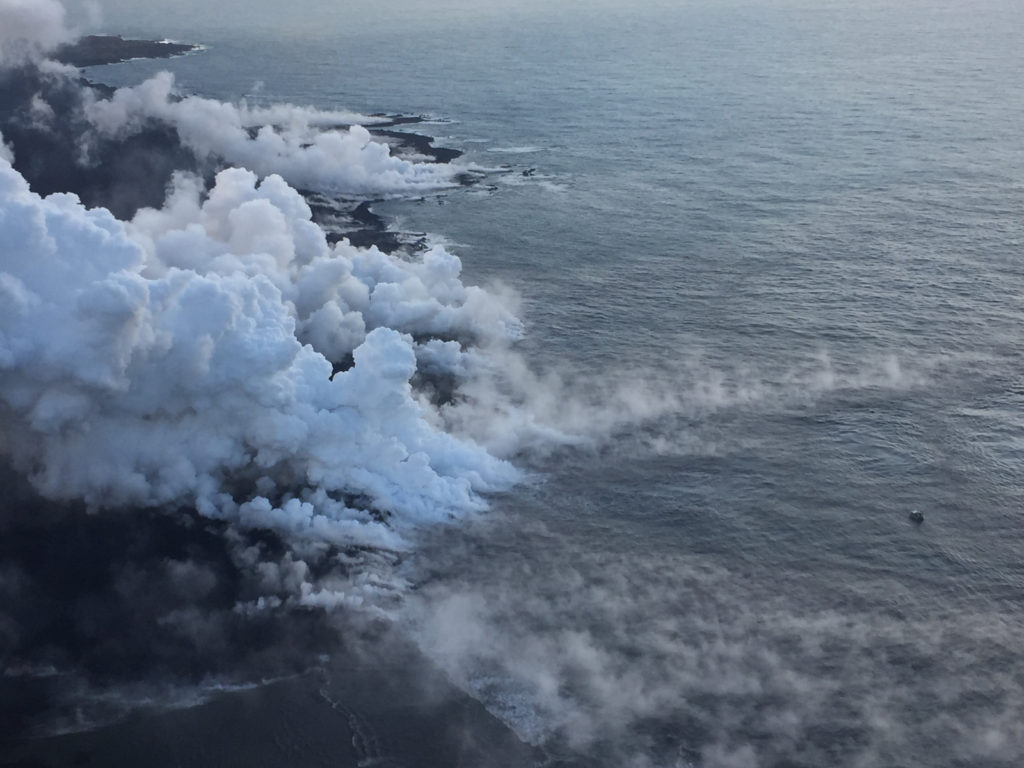 The Kapoho ocean entry (as of 6:30 a.m. HST), where the interaction of fissure 8 lava and seawater produces a white plume called « laze. » Laze is a mixture of condensed acidic steam, hydrochloric acid gas, and tiny shards of volcanic glass, and can be irritating to the lungs, eyes, and skin.

HVO field crews are on site tracking the fountains, lava flows, and spattering from Fissure 8 as conditions allow and are reporting information to Hawaii County Civil Defense. Observations are also collected on a daily basis from cracks in the area of Highway 130; no changes in temperature, crack width, or gas emissions have been noted.

Volcanic gas emissions remain very high from Fissure 8 eruptions. For the next few days, easterly wind conditions may bring vog not only to the south and west sides of the Island of Hawaii, but also upslope to the island’s interior.
USGS/HVO continues to monitor the lower East Rift Zone activity 24/7 in coordination with Hawaii County Civil Defense.

Kīlauea Volcano Summit
Low level ash emissions continue at the summit with slowly increasing seismicity, indicating that another small explosion is likely in the next several hours. Inward slumping of the rim and walls of Halema`uma`u continues in response to ongoing subsidence at the summit. 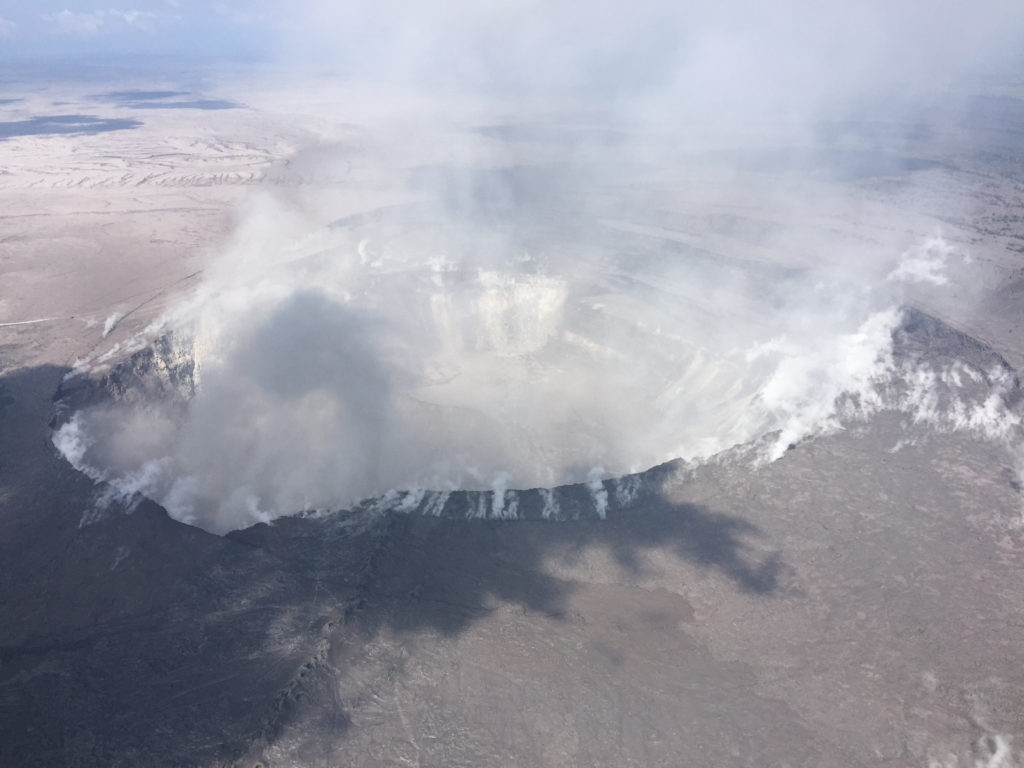 Dramatic changes at Halema‘uma‘u could be seen through gases rising from the crater during HVO’s overflight of the summit this morning at 10 a.m. HST. The view here looks to the southwest, with the former overlook parking lot barely visible to the left of the gas plume.

Sulfur dioxide emissions from the volcano’s summit, while lower than those recorded in early-mid May, remain high enough to impact air quality in downwind regions. Additional bursts of gas released with intermittent explosive activity are also transported downwind and may temporarily affect air quality as well.

Overnight, lava fountaining from Fissure 8 reached 130-180 feet. This morning’s overflight reported no significant changes in the fountaining and the channels carrying lava to the ocean; however, the ocean entry plumes were much smaller and the areas of upwelling offshore were less distinct. The diminished plumes are probably due to a change in atmospheric conditions rather than a change in Fissure 8 output. 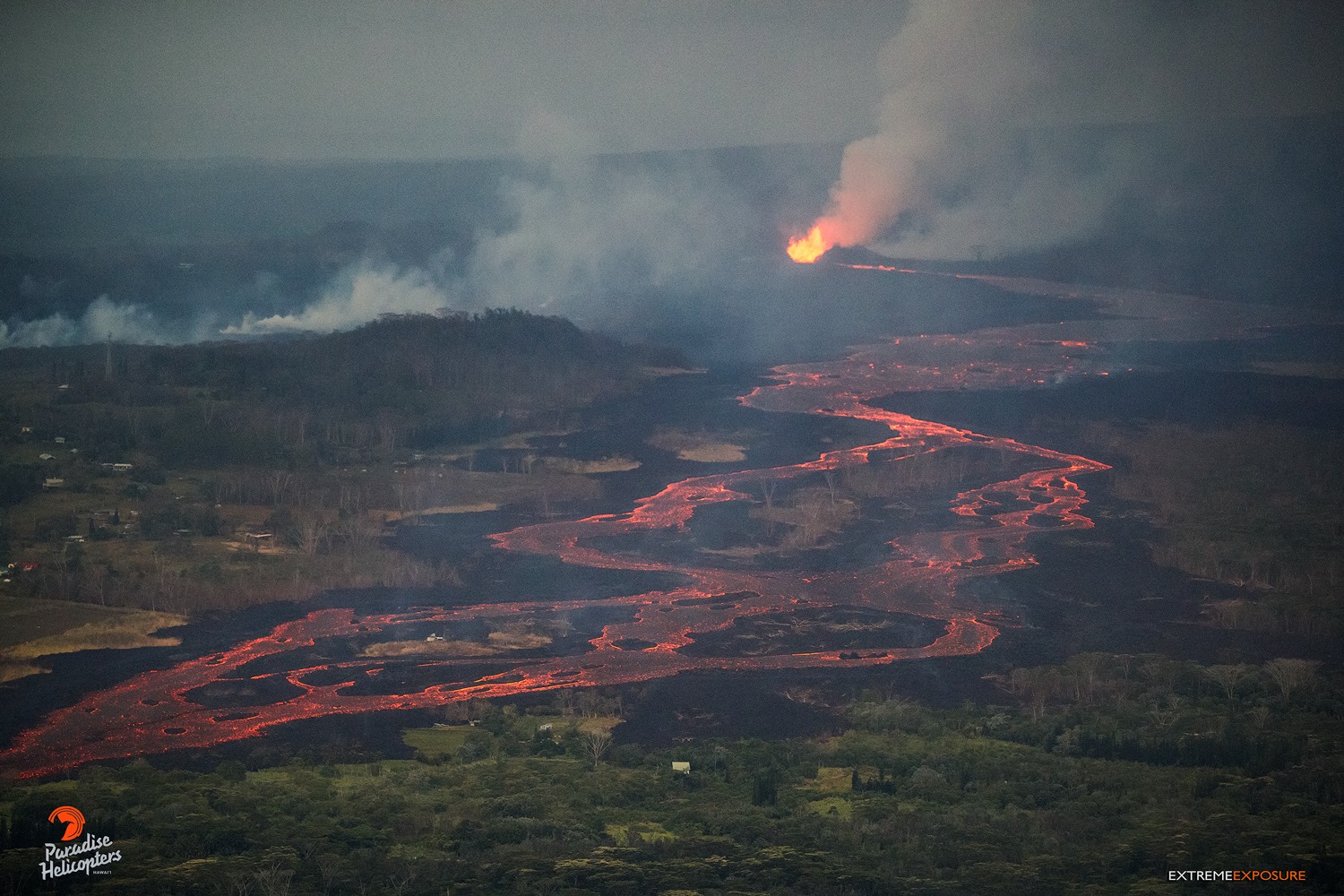 Fissure 22 was incandescent and there was minor lava activity at Fissures 16/18 this morning while the fuming from Fissures 24, 9 and 10 was less than observed yesterday.

A small explosion occurred at 4:48 AM HST on Saturday morning. No plume height measurements were possible owing to a lack of radar data, but the geophysical signature of the event was similar to past explosions that sent small amounts of ash to about 10,000 feet above sea level. Seismicity declined following the event, but earthquake activity is expected to ramp up again over the course of the day based on the pattern of the past few weeks. Inward slumping of the rim and walls of Halema`uma`u continues in response to ongoing subsidence at the summit.

Lava fountaining from Fissure 8 reached about 200 feet in height. Today’s morning and noon overflights reported no significant changes in the fountain nor in the channels carrying lava to the ocean. Mid-morning, lava started to slowly spill over the channel levees in the vicinity of Pohoiki road but most of the lava did not extend far enough to reach ground not already covered by lava. By early afternoon, lava was again confined to the flow channel.

Minor ash emissions continued at the summit. Seismicity remains low after the explosive eruption this morning and is expected to increase slowly over the next several hours. Inward slumping of the rim and walls of Halema`uma`u continues in response to ongoing subsidence at the summit.

The Fuego volcano in Guatemala, which had a large eruption on Sunday, killing more than 100 people, continues today with pyroclastic activity that descends its slopes.
The National Institute of Seismology, Volcanology, Meteorology and Hydrology said in a special bulletin that the flows are in the canyon of Las Lajas and El Jute and produce a column of ash that can reach up to 6000 meters of altitude .
It disperses to the West, Southwest and South, so that ash falls will occur in these areas.
Pyroclastic flows carry gases and materials of different sizes and very hot so it is recommended not to stay inside ravines or nearby. 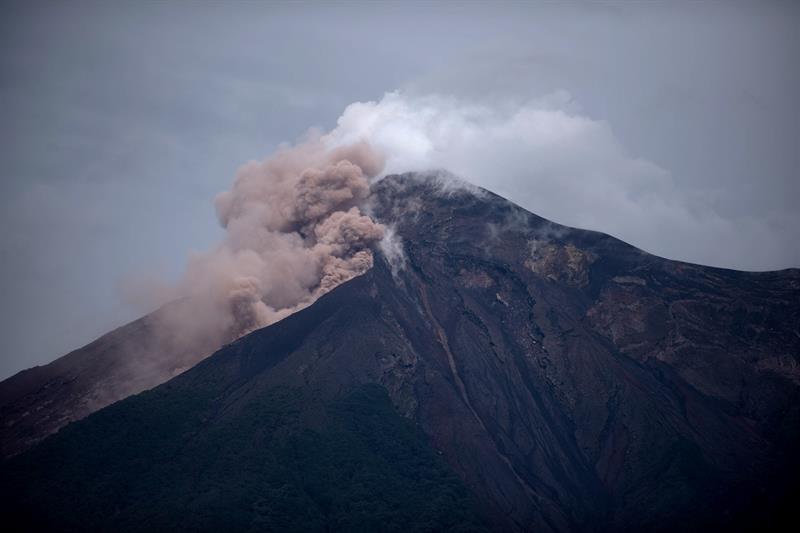 The eruption of the Fuego volcano, the largest in recent years, occurred on Sunday and has so far caused 109 dead, 58 injured, 197 missing, 4175 shelter, 12,407 evacuees, 182 casualties and touched 1,713 .617 people.
The authorities on Friday issued a conference in which they said that international aid is already coordinated and that 400 million quetzales (about $ 53 million) have been allocated to assist the crisis, including $ 192 million ($ 25.7 million). dollars) is covered by the emergency fund and another by the line items of the ministries.
Public Health and Social Welfare Minister Carlos Soto said patients transferred to the United States and Mexico are stable.
The authorities continue the research work suspended due to the situation of the volcano and for the moment they exclude that the accumulation of corpses in the region can produce an epidemic.

The activity of the Fuego volcano during the last hours, continues with vertical explosions in the crater, in a range of 4 to 7 explosions per hour, which reach 4200 to 4400 meters of altitude, dispersed in the West and Southwest for a distance of 15 kilometers. These explosions generated moderate audible rumblings within a radius of 10 kilometers.
In the morning, small avalanches were recorded from the edge of the crater towards the Las Lajas canyon. At this moment the seismic station FG3 records a seismic activity, associated with explosions and avalanches. However, the possibility that new activity pulses increase and can generate pyroclastic flows similar to or greater than those recorded to date is not excluded. 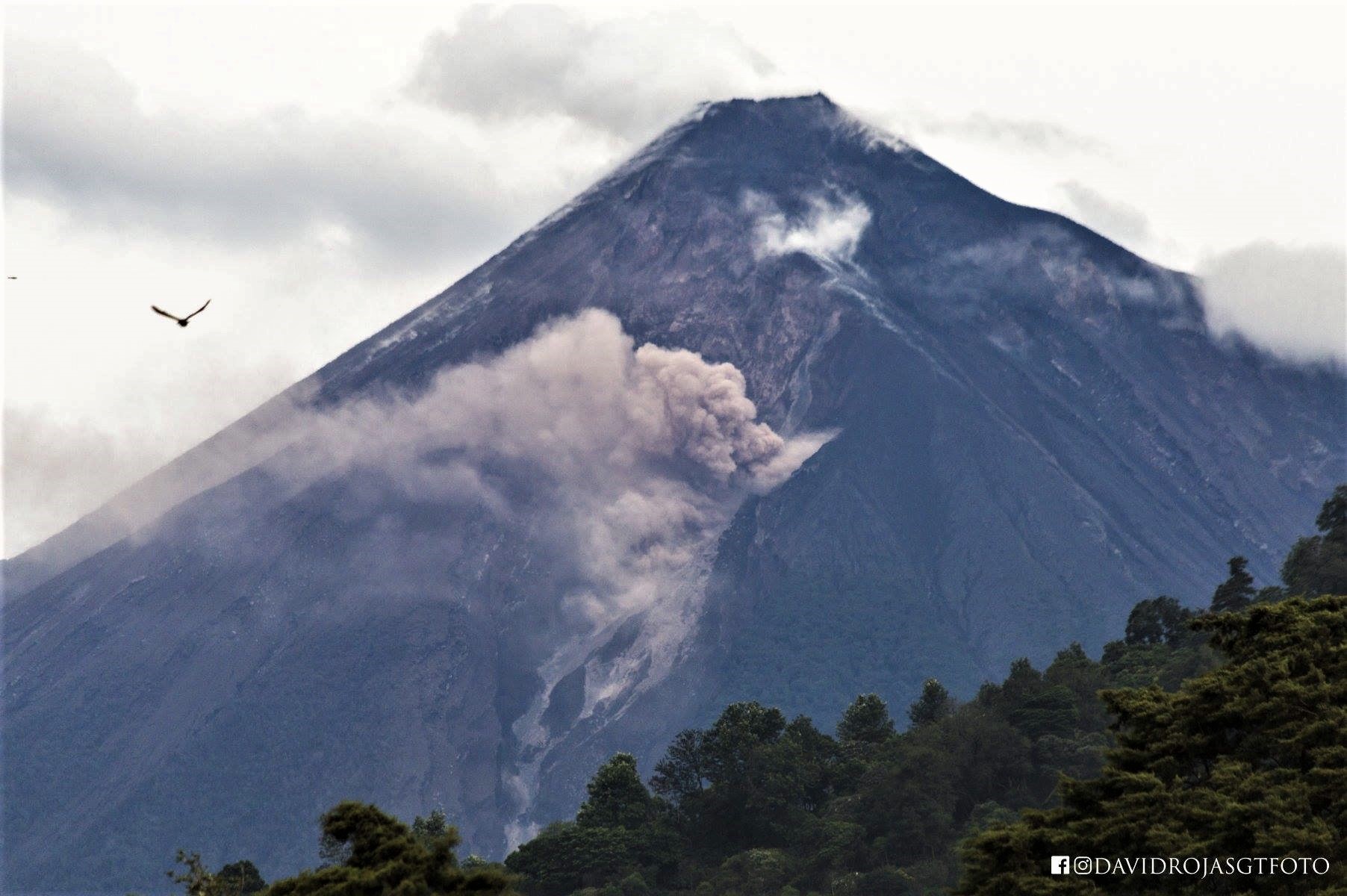 As indicated, there is a lot of pyroclastic material in the ravines, Seca or Santa Teresa, Mineral, Taniluya, Ceniza, Trinidad, Jute, Las Lajas and Honda. Which in combination with the rain, increases the possibility of developing strong lahars that can overflow like those that occurred today afternoon in the Pantaleón river. These lahars could grow in one of the ravines mainly in the afternoons and evenings.

Summary :
The Sierra Negra volcano continues to show signs of internal unrest with a large number of earthquakes and larger or larger local earthquakes being detected. These earthquakes have the characteristics of being volcanic earthquakes and are associated with vibrations of fluids, magmatic or gaseous, inside the volcano. The persistence of these high levels of seismicity suggests that the magma moves into the Sierra Negra volcano, which could produce an eruption. The IG-EPN maintains its vigilance and will report any significant change in volcanic activity.

Introduction
The Sierra Negra volcano is one of the largest volcanoes on the Galapagos Islands and has an oval caldera measuring 9 km from east to west and 7 km to the north. This volcano produced at least 10 eruptions in the historical period, with an average rest period of 15 years between each eruptive period. Its last two eruptions took place in the years 1979 and 2005.

Seismic activity
As reported in the three previous reports published this year, the Sierra Negra volcano continues to exhibit high levels of seismic activity. Since mid-2016, the number of earthquakes per day has increased significantly. During the last 10 days, there are an average of 42 local events per day. However, it should be noted that on May 25, 104 earthquakes were recorded, the highest number of earthquakes per day recorded since 2015 generated in this volcano.
In addition, on June 8, 2018 at 07:15 a LP event was recorded on the volcano with a MLv magnitude of 4.8. In the last 24 hours, there have been a total of 48 events related to rock fracturing (VT), 2 fluid movement events (LP) and 3 hybrid type events.
From 11:37 to 1:10 pm, 24 of these events were recorded, most of them of the volcano-tectonic type (VT). 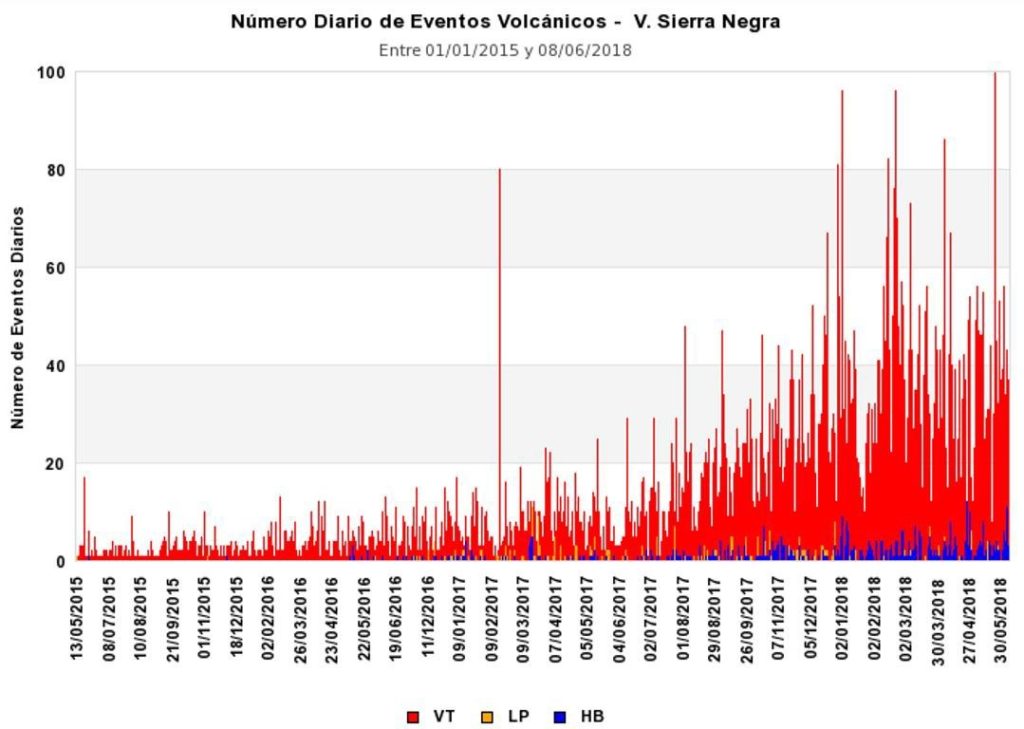 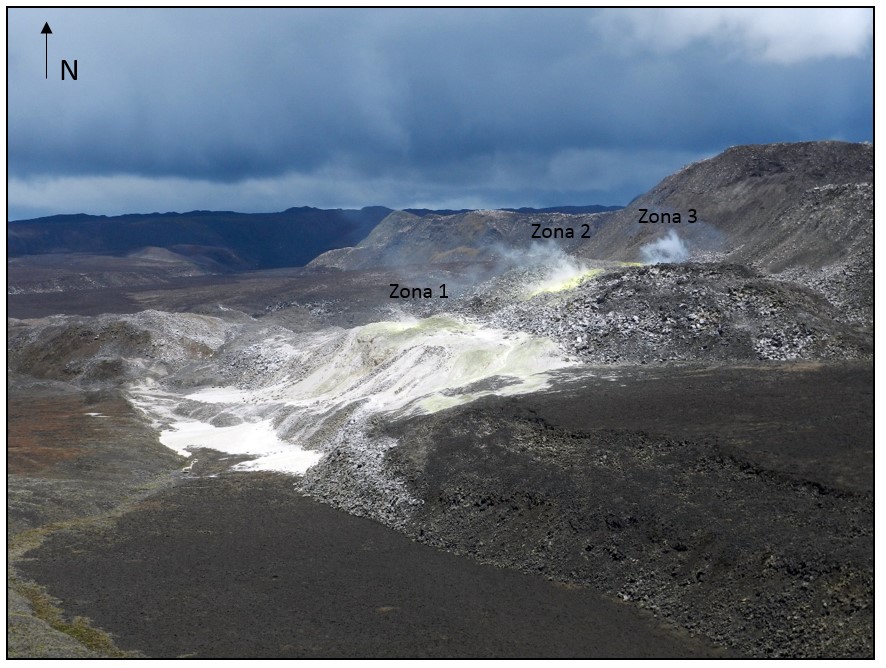 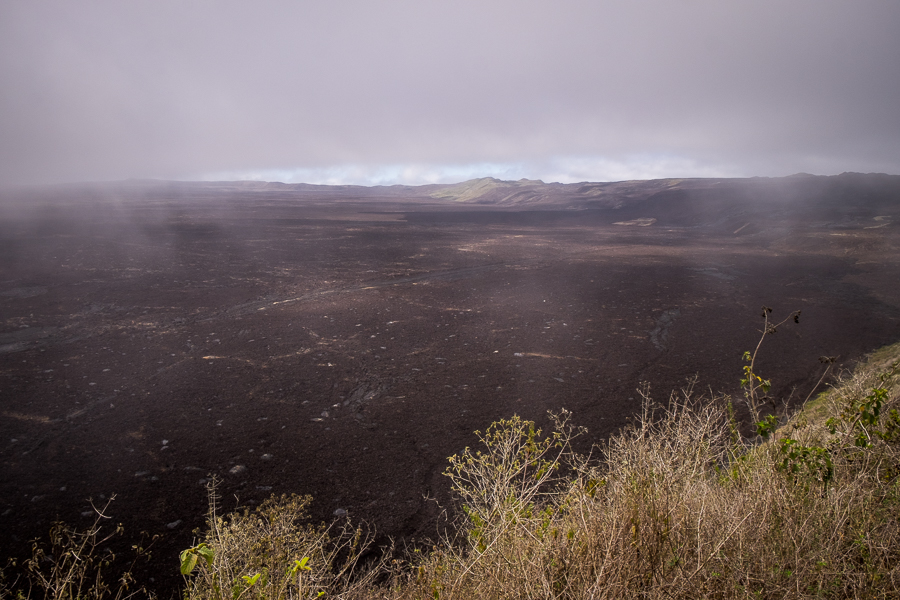 The very large deformation observed in the GPS stations inside the caldera, compared to the lower levels observed outside the caldera, suggests a source of surface deformation under the caldera.
Given the characteristics of the state of internal agitation of the volcano, the appearance of an eruption is possible. The different possible eruptive scenarios (location and size) for the Sierra Negra volcano are presented in Special Report No. 3. Currently, in case of new eruption, the most likely scenario is a medium-sized eruption in the volcanic area of Chico .

The level of activity of the volcano is maintained at the level:
YELLOW LEVEL ■ (III): CHANGES IN THE CONDUCT OF VOLCANIC ACTIVITY

For the period between May 29 and June 4, 2018, there was an increase in both the occurrence and the levels of released seismic energy. In general, the events associated with rock fracturing inside the volcanic edifice prevailed, scattered around the volcano, at distances less than 6 km, compared to the crater of La Plazuela, up to 2.7 km from depth from the top. volcanic (reference level at 4700 m alt.) and a local maximum magnitude of M 1.3 on the Richter scale. 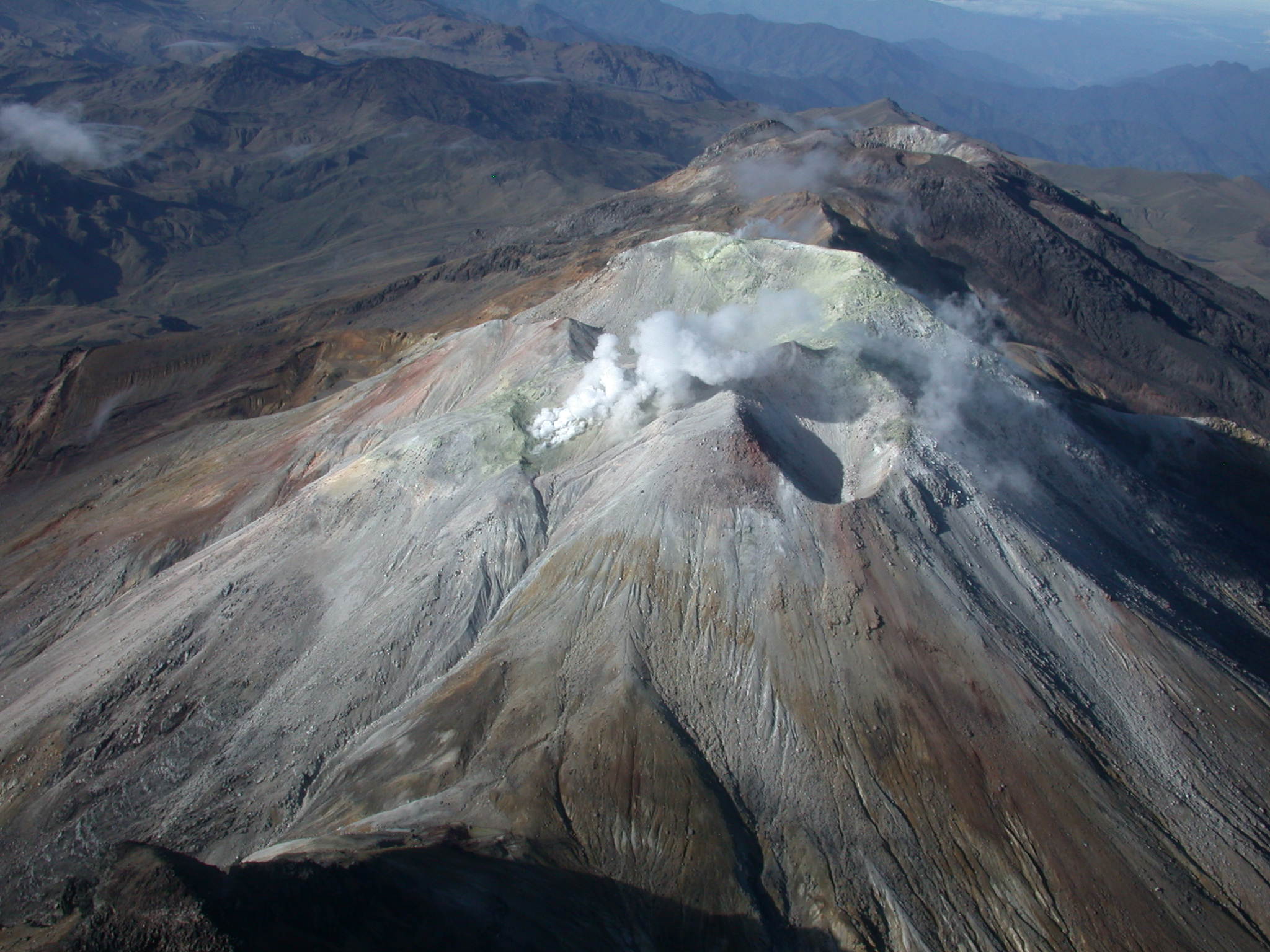 The weather was unfavorable during the week and the peak was only observed on May 30 and June 1, 2018, with a gas emission column from the El Verde fumarolic field, with a low exit pressure, a white color, a low height and a direction of dispersion variable according to the prevailing direction of the winds in the region. 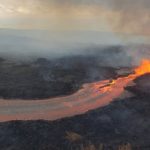 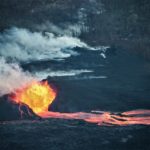