Lower East Rift Zone Eruption
The intermittent eruption of lava in the Leilani Estates subdivision in the lower East Rift Zone of Kīlauea Volcano continues. Fissure 8 erupted lava fountains until about 4 p.m. HST, and the ‘a’ā flow advanced slowly northward through the afternoon, even after the lava fountains shut down. Geologists reported this early evening that the flow crossed Ho’okopu Road, a distance from fissure 8 of about about 1.1 km (0.6 miles). They also reported new ground cracks in the vicinity of fissures 8 and 9 that were emitting thick steam and gases, but no lava spattering was observed by the time of this status report.

Kīlauea Volcano Summit
Tiltmeters at the summit of Kīlauea Volcano continue to record the deflationary trend of the past several days. Corresponding to this deflationary trend, the summit lava lake level in Overlook crater dropped about 2 m (6.5 ft) per hour during the day. The lake level has dropped an estimated 220 m (722 ft) since the collapse of Puʻu ʻŌʻō crater on April 30. Rockfalls from the steep crater walls into the retreating lake continue to produce ashy plumes above Halema’uma’u crater. Rockfalls and ashy plumes are expected to continue as the lake level drops. 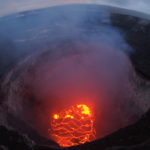