Maly Semyachik is a compound stratovolcano located in a 10-km-wide caldera within the 15 x 20 km mid-Pleistocene Stena-Soboliny caldera. Following construction during the late Pleistocene of the Paleo-Semiachik volcano beginning about 20,000 years before present (BP), activity migrated to the SW, forming Meso-Semiachik (about 11,000-9000 BP) and Ceno-Semiachik (about 8000 BP to the present). An initial stage lasting about 3500 years was dominantly explosive, constructing the present cone. A second stage beginning about 4400 years ago was marked by alternating constructive and destructive processes during which the volcano was destroyed by major explosions and then reconstructed. A crater lake fills the historically active Troitsky Crater, which formed during a large explosive eruption about 400 years ago.

At least 30 people were poisoned and 178 people were living on the slopes of the ijen volcano on java island in Indonesia and were evacuated. The cause was a sulphurous gas emission after several light eruptions yesterday in the afternoon of March 21st.
The volcano is known for its beautiful turquoise blue lake and mining activity which involves dangerous and exhausting work by poorly paid workers. The status of the volcano is normal but access to these activities has been limited. 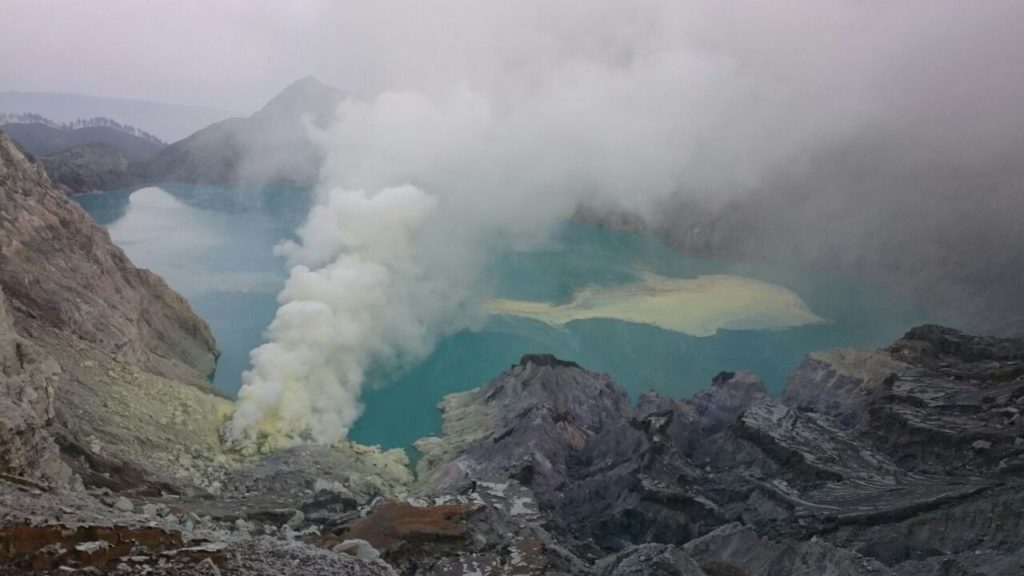 The National Disaster Management Agency (bnpb) ensures that the volcano, frequented by tourists who will see the striking color of the blue flames of sulfuric gas at night, remains at the minimum level of eruption alert, on a scale of 4. The authorities have set up 25,000 masks and 20 ambulances to mitigate gas emissions.
The eruptions, which were phreatic-water accumulated in the crater or under the heated surface because of the proximity of the magma and causing an explosion, forced to close the access to the volcano for the visitors and the tourists.
The eruptions of Mount Ijen are in the form of underground eruptions from the main crater. The last phreatic eruption took place in 1999. The activity of the ijen volcano is generally characterized by a thin white feather emerging from the crater, with an altitude ranging from 50 to 200 meters.

Subject: Extraordinary activity bulletin for Chiles and Cerro Negro volcanoes.
The level of activity of volcanoes is maintained at the level:
YELLOW LEVEL ■ (III): CHANGES IN THE CONDUCT OF VOLCANIC ACTIVITY.

In today’s March 21, 2018, the Chiles volcano has shown a further increase in its seismicity associated with the fracturing of the cortical material of the volcanic building. Some of these earthquakes have reached amplitudes up to M 3.7 on the Richter scale and have been reported as felt by the inhabitants of the municipalities of Cumbal, Túquerres, Pupiales and Ipiales. This seismic event demonstrates the behavior of a volcano that remains active.

As has been reported in regular newsletters, seismic activity has increased in recent weeks, it should be noted that the increase in what has happened today, both in number and in power, is clearly higher than the changes that have been reported.
The Colombian Geological Service and the National Polytechnic Institute of Geophysics of Ecuador closely monitor the evolution of this seismic activity and volcanic phenomena and will report immediately on the changes detected.

Turrialba Volcano
During the past 24 hours, low-frequency (LP) volcanic earthquakes and low-amplitude intermittent harmonic tremors continue to be recorded. These seismic events are associated with fluid movements through the volcano. 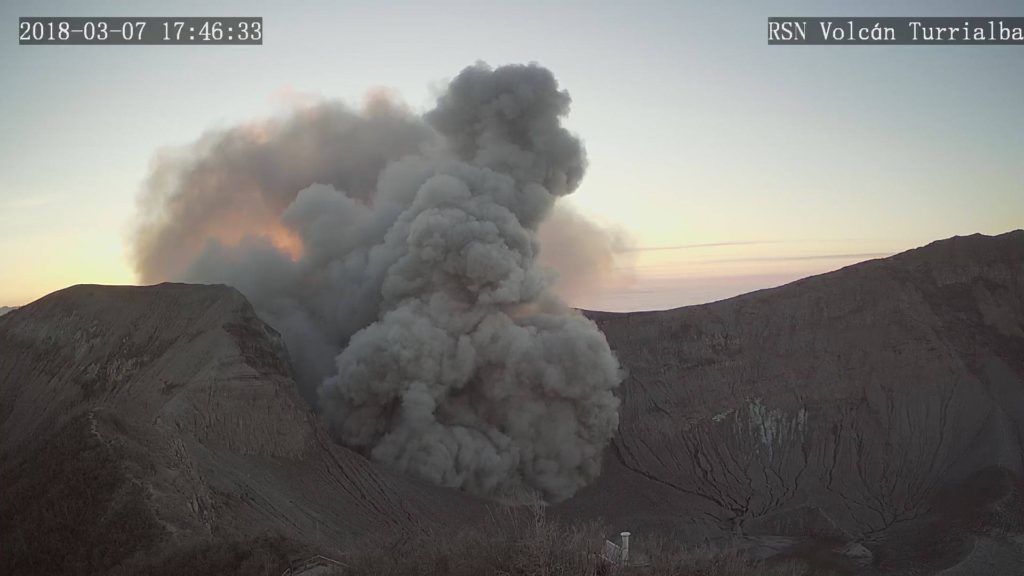 The Turrialba volcano has not re-emitted ash in the last week, however, it continues to passively emit a large stream of magmatic vapor and gas at high temperature (600-800 ° C) from a body of volatile-rich magma, suggesting that the volcanic system is open enough to favor the passive transfer of matter and heat to the surface. The heat flux of this shallow magma warms the surrounding rock of the volcanic canals and produces a noticeable incandescence at night inside the western crater. The magmatic gas and aerosol plume was dispersed by prevailing winds to the northwest, that is, to the north of Heredia and Alajuela.

Poas Volcano
The volcano shows a persistent but weak degassing of water vapor and gas at low temperature (<100 ° C) directly into the atmosphere since the new acidic lake appeared in the second half of January 2018 remains dry since mid-March 2018. Water vapor and gases are dispersed by prevailing winds southwest of the volcano.

The level of seismicity recorded on Poás is very low and corresponds mainly to low frequency (LP) and low amplitude volcanic earthquakes, in addition to occasional low frequency tremors. These recordings are associated with the hydrothermal and fumarolic activity of the volcano

Rincón de la Vieja Volcano
During the last two days, no phreatic eruption has been observed on Rincon. The last small phreatic eruption that seismographs recorded and which was observed through the OVSICORI-UNA web cameras located in Gavilán and Buenos Aires of Upala, is that of 19 March 2018 at 14:13. 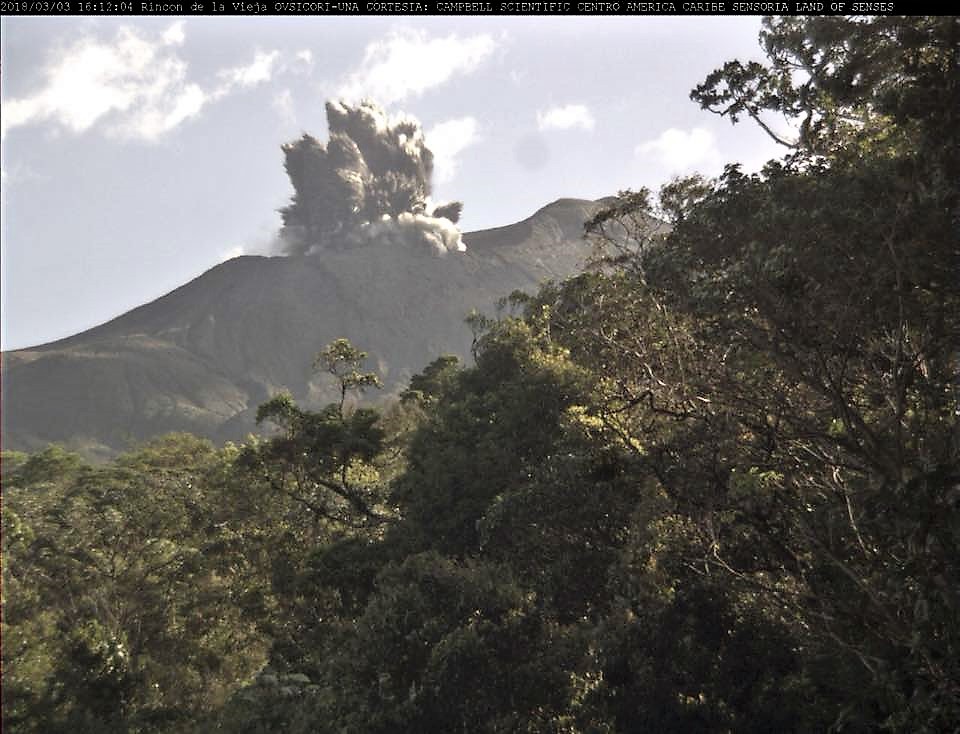 Seismicity has a relatively low level with low frequency occasional earthquakes (type LP) of small amplitude and short tremors associated with the gas outlets in the form of large bubbles coming out of the lake super acid the main crater . 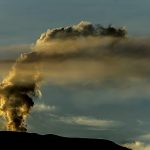