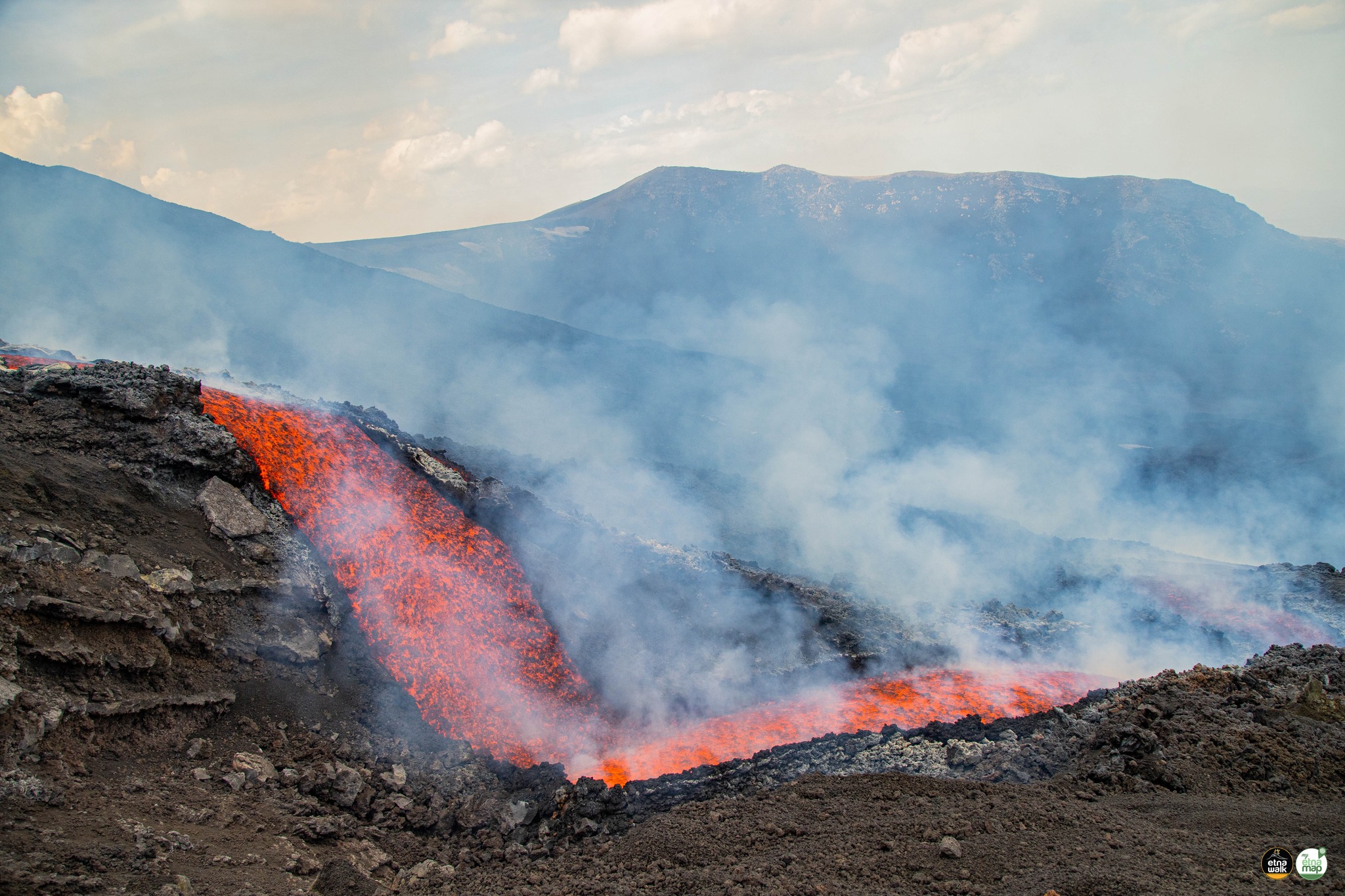 In the light of the surveillance data, it is highlighted:
1) Temperature of the crater fumaroles: Maximum stable emission temperatures around 381°C
2) CO2 flux in the crater area: The ground CO2 flux in the summit area shows a slightly decreasing trend, with an average of about 6000 g/m2/day.
3) SO2 flux in the crater area: SO2 flux at a medium-high level and increasing
4) Geochemistry of fumarolic gases: No update since the last bulletin
5) CO2 fluxes at the base of the La Fossa cone and in the Vulcano Porto area: The CO2 fluxes recorded in the C. Sicilia and P4max sites remain at medium-high values; at Rimessa there is a slight downward trend, at the Faraglione site the values ​​are slightly increasing.
6) Geochemistry of thermal aquifers: The physico-chemical parameters of thermal aquifers present stable or decreasing anomalies
7) Local seismicity: Further increase in the number of microseisms in the Gran Cratere (events with F> 1HZ); the moderate increase in the daily number of VLP-type events observed last week continues with fluctuations.
8) Regional seismicity: No regional seismicity.
9) Deformations – GNSS: Data from the permanent GNSS network did not show any significant changes during the week.
10) Deformations – Inclinometry: The data from the inclinometric network did not show any significant variations.
11) Other observations: Gravimetry: No significant variation was recorded.
Measurements of CO2% concentrations at the « Casa Puglisi » house: The investigation confirms the presence of high concentrations of CO2 of endogenous origin near the Casa Puglisi house which, in a diffuse way from the ground, would rise towards the surface and could accumulate, especially in the stables, depending on weather conditions, inside the house on the ground floor. 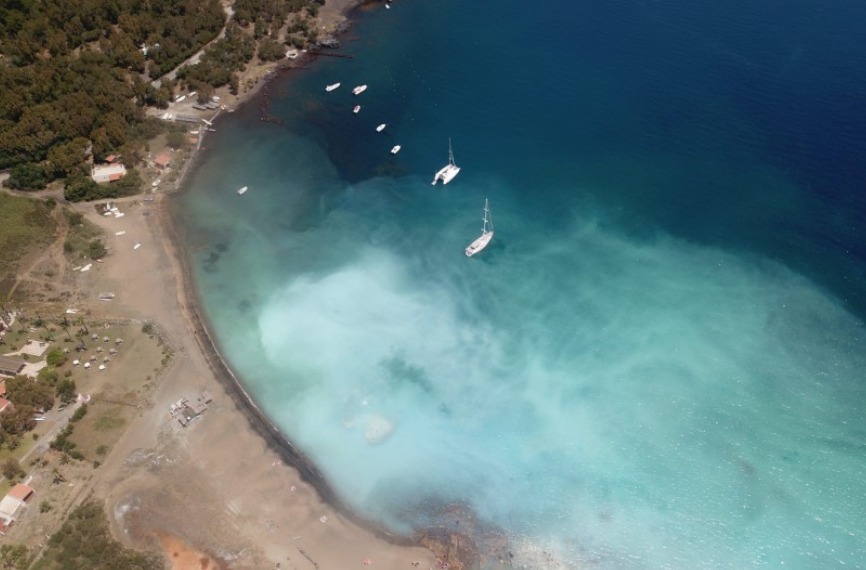 Observations on anomalous phenomenology in the stretch of sea in front of Levante Beach:
On Monday, 05/23/2022, the appearance of a milky white color distributed over the entire strip of sea in front of Levante beach in Vulcano was reported by the inhabitants of Vulcano Porto.
In-depth analyzes by witnesses on site showed that the phenomenology had already begun on 05/22/2022. The phenomenon was observed thanks to the INGV camera placed at the Lipari Observatory.
With reference to local seismicity, on May 22 and 23, a steady increase in the number of low frequency events (VLP; spectral peak below 1 Hz) was observed compared to that recorded over the past 2 months.
The duration and extent of the event, along with the appearance of the widespread milky color, suggests that impulsive degassing events affected the vent area below Levante Beach, which was historically affected by emissions of gases from sites present at shallow depths on the seabed.
A phenomenon of release of fluids due to an increase in pressure in the hydrothermal system can indeed cause the emission of water rich in sulphides, present in the shallowest part of the system itself, therefore with typical dark colors. The subsequent oxidation causes the formation of elemental sulfur and sulfates and the subsequent massive flocculation, producing the milky white appearance of seawater. The impulsive dynamics of outgassing also cause pre-existing sulfur deposits to disperse into the water, helping to enhance the phenomenon in question.
Measurements in seawater showed a general and significant drop in pH over the entire arm of the sea concerned. The complete results will be reported in technical-scientific reports that will be produced in the coming days. 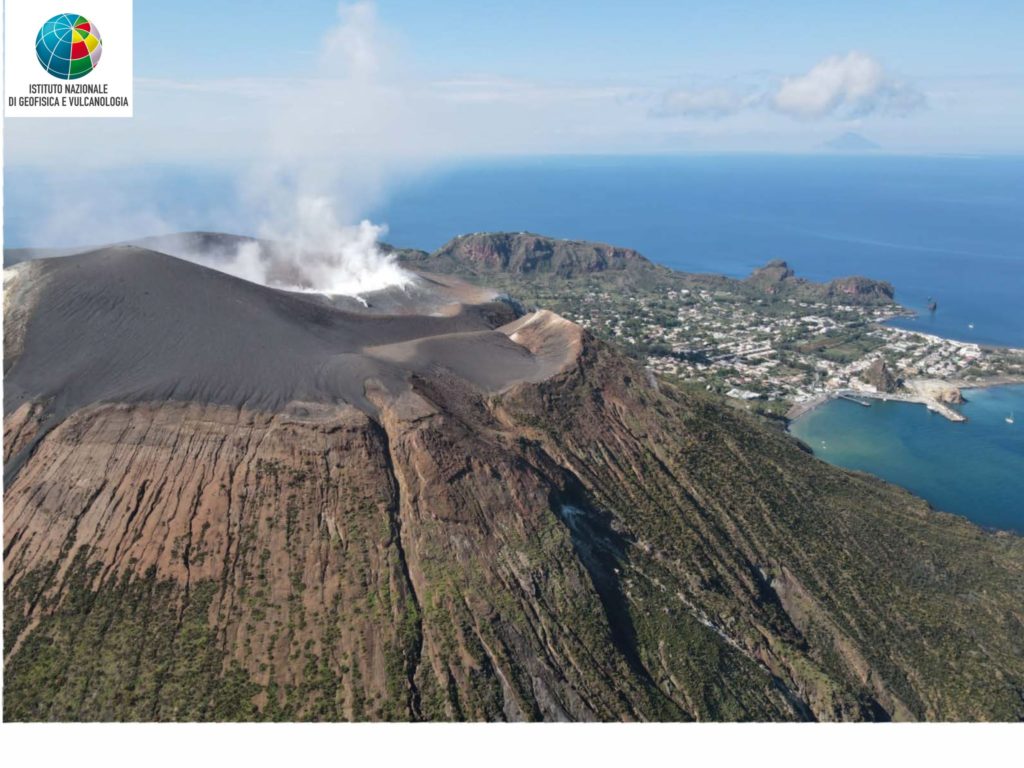 CRATER FUMEROLES TEMPERATURE:
Along the upper edge, the maximum emission temperature has very stable values ​​with a weekly average of 381°C (hourly data).
The fumarolic field has equivalent emission temperatures along the entire summit fracture line, confirming a thermal anomaly still maintained by a constant vapor flux.
The thermal signal of the sensor placed on the internal side registers a maximum temperature of 110°C.
Finally, the update of the data of the VSCS summit station is missing due to a breakdown independent of our technical possibilities of intervention: interruption of the electricity supply by ENEL of the INGV-Vulcano center. Eventually, if no other failure occurs and until the buffer is full, the data will be recoverable from the memory cards present in the stations.
On-site working conditions, which are still prohibitive, prevent maintenance from being carried out on the entire network.

LOCAL SEISMICITY
In the reference week, the increase in the number of local high-frequency events (dominant peak > 1Hz) continued and the highest values ​​recorded in recent months were reached on 26 and 28 May. With regard to events of the low frequency type (VLP; dominant peak 1Hz), the daily increase in number, already reported last week, continues, although with fluctuations. 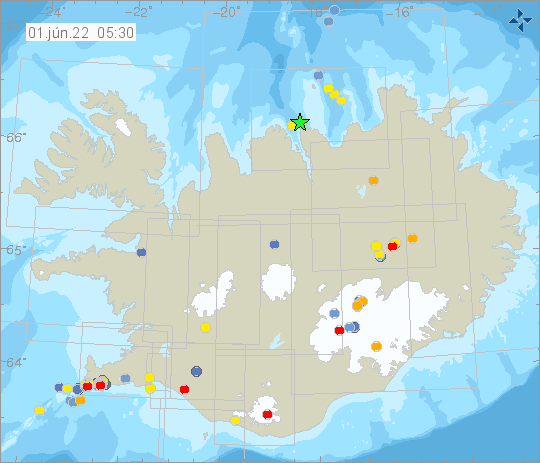 The inflation has been confirmed by GPS sensors and sattilite imagary. Other mentionable seismic activity outside the Reykjanes peninsula was a small seismic swarm in Sandfell, north of Haukadalur. There around 50 earthquakes were measured on the 24th of May. A number of earthquakes have been measured in the Bárðarbunga caldera this week, as well as just east of the caldera where a dyke formed in 2014. Additional mentionable activity was earthquakes on the Reykjanes ridge, between Reykjanes and Eldey island.

Halemaʻumaʻu Lava Lake Observations:
Eruption of lava from the Halemaʻumaʻu western vent into the active lava lake and onto the crater floor has continued over the past 24 hours. The active lava lake has shown continuous surface activity, with lake level remaining relatively high, with some minor fluctuations in level. Lava ooze-out activity continues with nearly continuous ooze-outs along the western and north-western edge of the lava lake. Overflight measurements on May 10, 2022 indicated that the crater floor had seen a total rise of about 106 meters (348 feet)  . 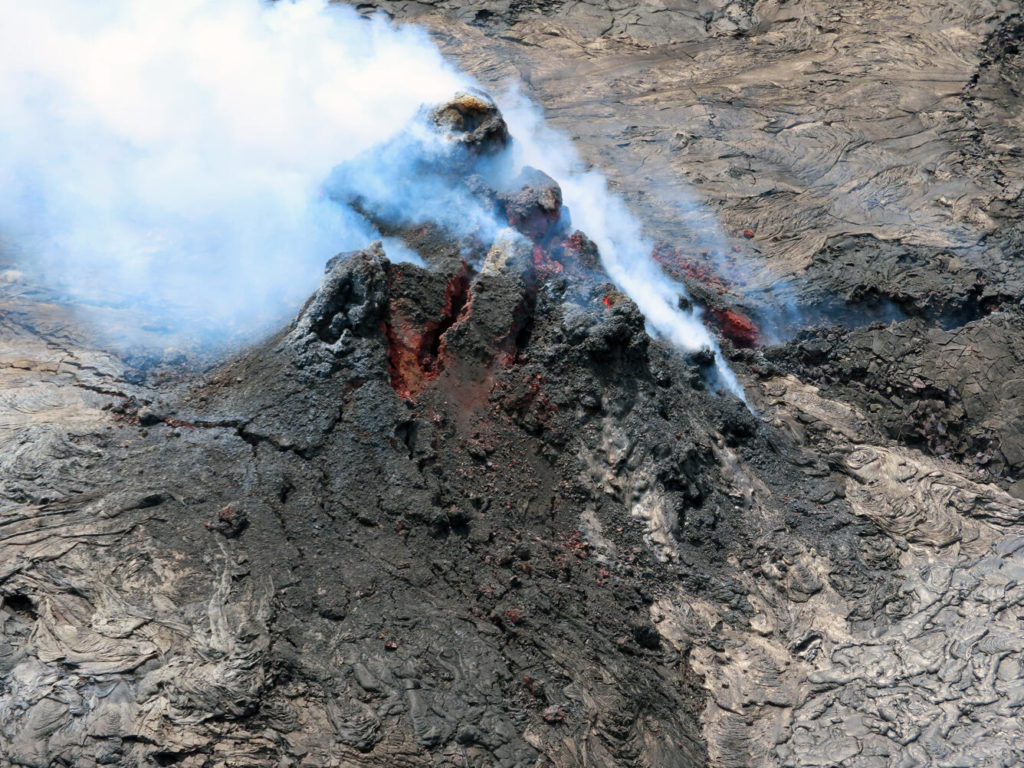 The vent within Halema‘uma‘u, at the summit of Kīlauea, was degassing during a field observation visit on the morning of May 18, 2022. The vent is 56 feet tall (17 meters) and has a small puka (hole) visible with bright red glowing lava within on the right side of the photograph. Throughout the eruption, the cone has gone through several cycles of growth and collapse. The growth is driven by successive accumulation of spatter and lava flows (like the silvery smooth ones on the right side of the picture) whereas the collapses are driven by failures along weaknesses in the structure, like the large cracks visible on the cone in this photo.

Summit Observations:
Summit tiltmeters returned to long term trends. A sulfur dioxide (SO2) emission rate of approximately 2,300 tonnes per day (t/d) was measured on May 22, 2022.

1) VOLCANOLOGICAL OBSERVATIONS: Strombolian activity at the level of the Southeast Crater, sometimes accompanied by the formation of ash clouds, and the opening of several effusive vents along an eruptive fracture which produce the development of flows of lava in the Valle del Bove.
2) SEISMOLOGY: Low seismic activity of fracturing. High values ​​of volcanic tremor, centroid sources in the Southeast Crater area.
3) INFRASOUND: Strong infrasound activity at the Southeast Crater, especially on May 23-25.
4) DEFORMATIONS OF THE GROUND: The analysis of the deformations of the ground shows a weak deflation these last weeks. In general, no significant change is observed.
5) GEOCHEMISTRY: SO2 flux at an average level
Soil CO2 flux shows medium to high values.
The partial pressure of dissolved CO2 in the aquifer shows values ​​in seasonal variability.
There are no helium isotope ratio updates. The latest data available from 05/10/2022 showed high values.
6) SATELLITE OBSERVATIONS: The thermal activity in the summit zone was of a high level in correspondence with the current effusive activity.
7) OTHER NOTES: The current eruption at the Southeast Crater is fed by a more evolved magma than that of February 2022, and therefore already residing in the magmatic « reservoir » (chamber) which feeds the current activity of the South Crater -East. 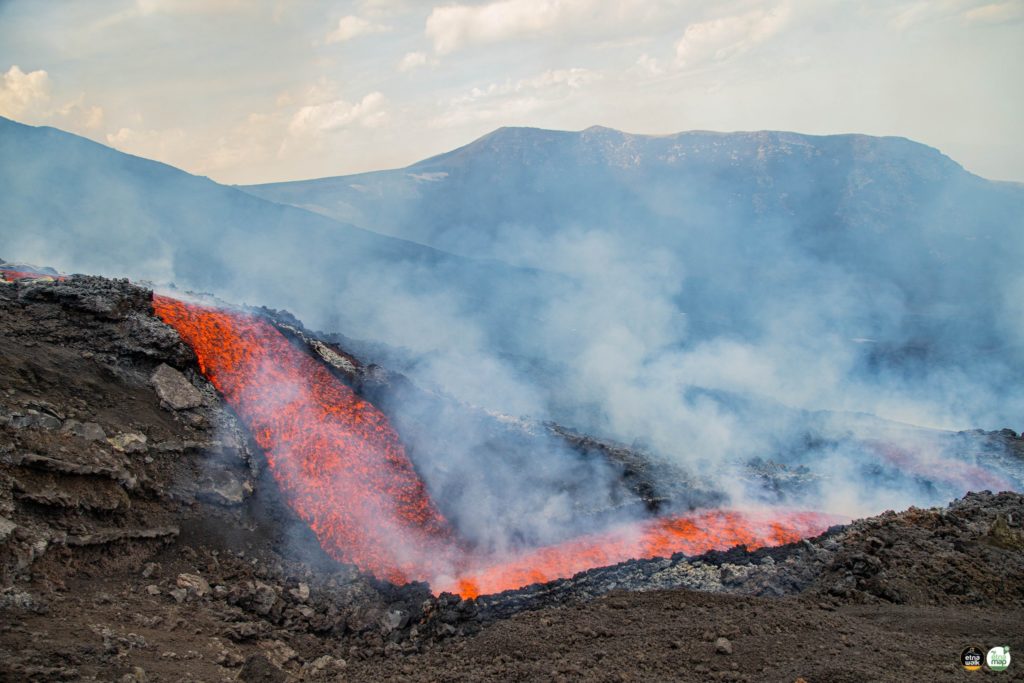 VOLCANOLOGICAL OBSERVATIONS
The monitoring of the volcanic activity of Etna, during the observation period in question, was carried out by analyzing the images of the network of surveillance cameras of the INGV, Osservatorio Etneo (INGV-OE) and at through various field inspections carried out by INGV-OE staff.
During the week in question, weak and occasional ash emission was observed at the Southeast Crater, which remained confined to the summit area, and intermittent Strombolian activity.
On May 29, at 06:05 UTC, an effusive vent opened in the upper Valle del Bove and during the day Strombolian activity in the Southeast Crater ended. The observations of field showed that in the upper part of the western wall of the Valle del Bove, there were two lava emission points along an eruptive fissure oriented in the East-North-East direction. From the effusive vents, various lava flows are emitted, with a low rate of effusivity, which in the following days reached an altitude of about 2100 m near Monte Simone.

Overall, the data collected during the field surveys as well as the analysis of the Sentinel satellite images of May 29, Planetscope of May 23, and the orthorectified image of the EMCT of May 29, 2022, and a drone survey of May 30 , made it possible to create a preliminary map of the lava field and the eruptive fissure with the two effusive vents located at an altitude of 2850 and 2730 m, show that the most advanced front of the flow is around 2090 m from height (Figure 3.1). 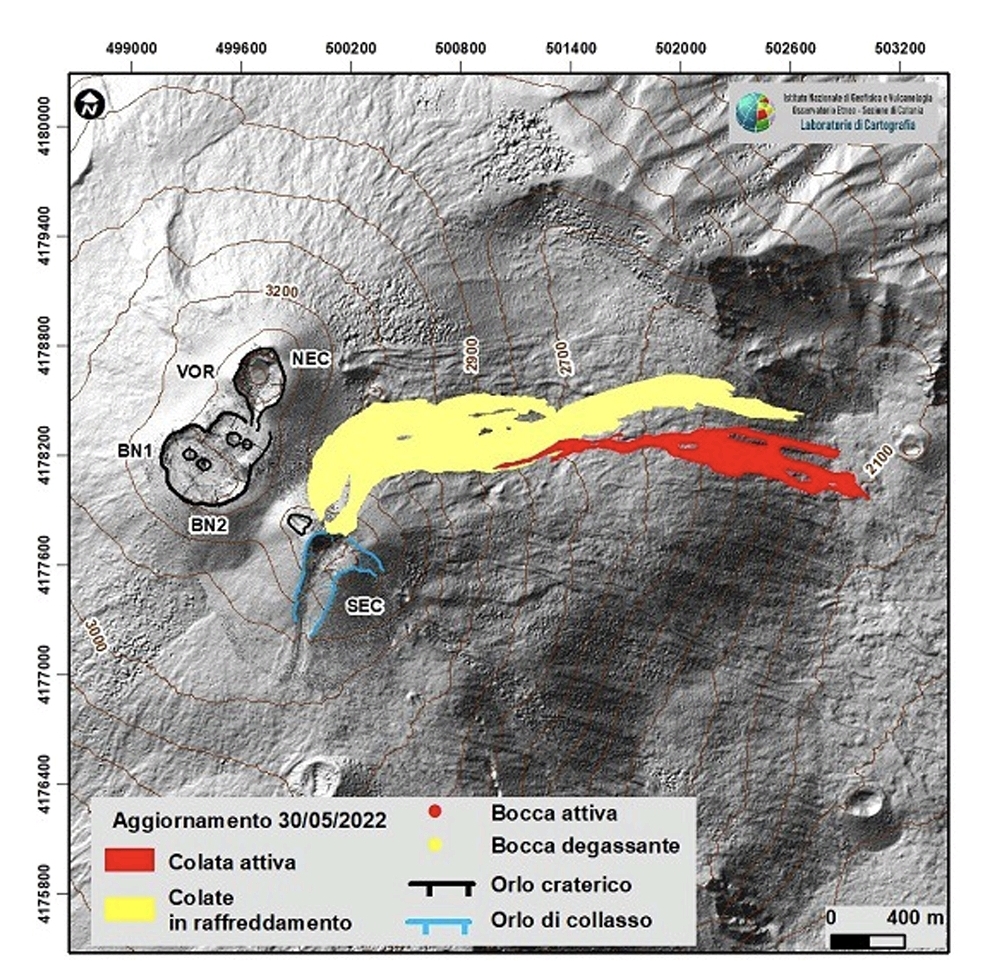 Finally, although the constant and continuous presence of gas did not allow an optimal survey, a series of arcuate surface fractures located on the east side of the Southeast Crater at an altitude between 3000 and 3200 m were detected, which produce slope instability phenomena causing the material to slide downstream.

The eruptive activity of Etna was monitored with the CLHOTSAT system, thanks to the processing of infrared satellite images from the SEVIRI sensor for the period from May 12 to 31, 2022. The first thermal anomaly was identified on May 13 at 6:45 GMT. Thermal activity was observed continuously throughout the analyzed period until 09:15 GMT on May 31. Estimates of the average eruption rate (TADR) show a first phase from May 13 to 28 with flows between 2 and 4 m3/s and a second phase from May 29 with higher flows exceeding 10 m3/s . By integrating the values ​​of the effusive rate throughout the eruptive period, the cumulative volume curve was also calculated, i.e. approximately 4 million m3. 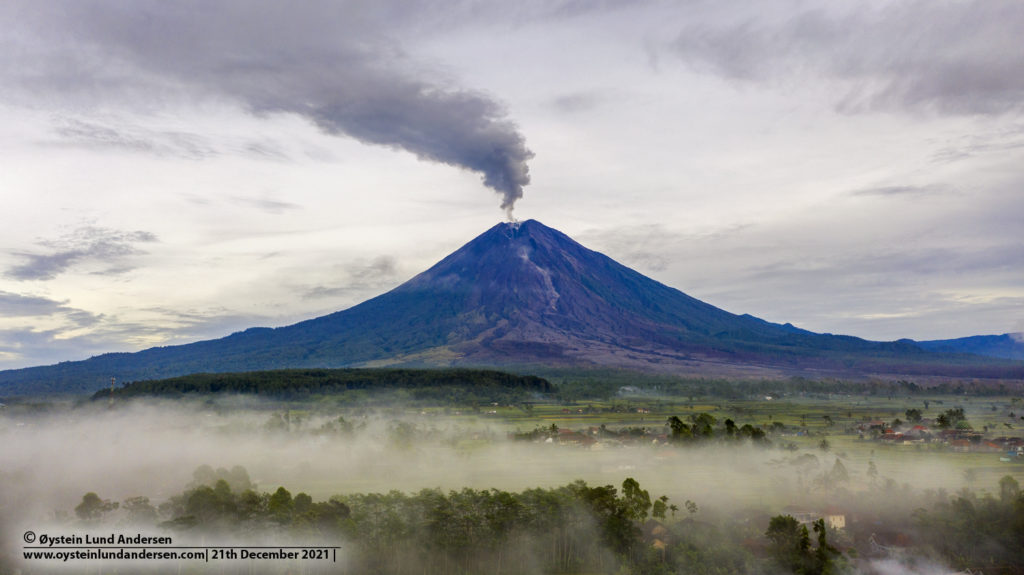 DAILY REPORT OF THE STATE OF THE REVENTADOR VOLCANO, Tuesday May 31, 2022.
Information Geophysical Institute – EPN. 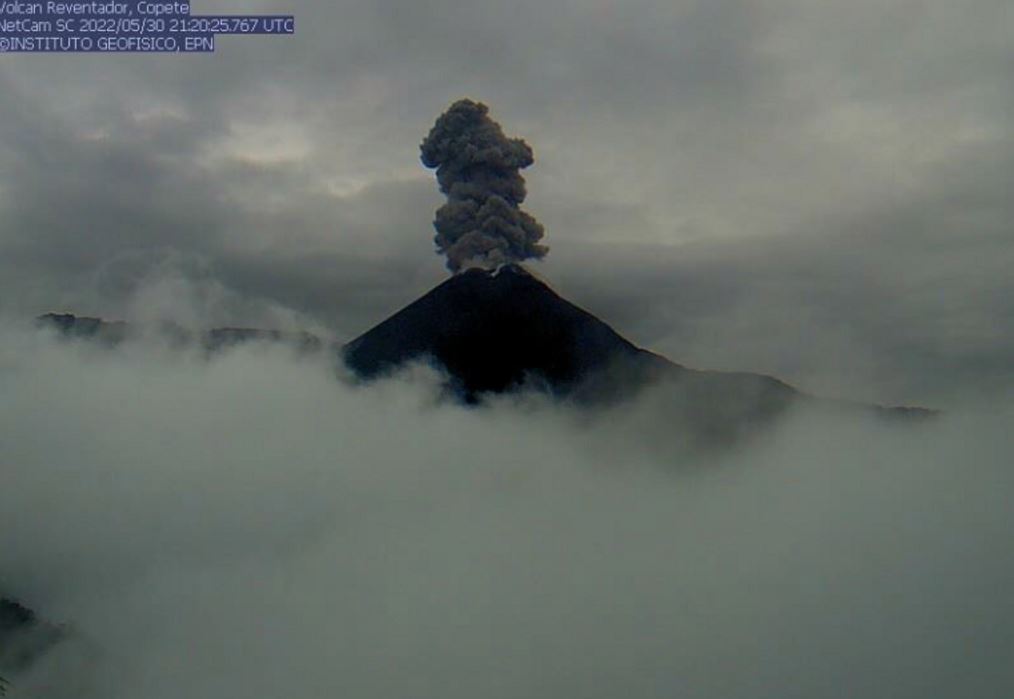 Rains / Lahars:
Thanks to the Windy satellite application, rains of 0.4 mm were recorded in the sector without generating muddy water flows.

Other Monitoring Parameters:
The MIROVA satellite system reported 1 moderate thermal anomaly and 1 low thermal alert over the past 24 hours.

Observation:
The area of the volcano remained cloudy most of the time, the previous nocturnal incandescence could be observed in the crater. At the moment, the area is cloudy. 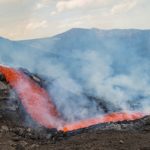 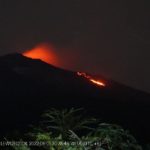