Gaua volcano has now increased in the high level of the major unrest state. The Volcanic Alert Level remains at Level 2.

New analyses suggest that this volcano activity is likely to continue at this same level of major unrest (Level 2) or increase to the minor eruption state (Level 3). Volcanic hazards remain on the Gaua volcanic cone (e.g. volcanic gases). The danger zone for life safety is limited on the volcanic cone.

Ground observations and satellite data confirmed that the current activity consists of ongoing volcanic steam cloud which may contain volcanic gases at Mt. Garet. This morning a significant thick ash plume emitted from the vent after a strong heavy sound of explosion that was heard by villagers, especially in Naveto village of North-East Gaua. Visitors will continue to smell volcanic gas while approaching the volcanic cone.

Gaua volcano is one of the active volcano in Vanuatu. Historically, the formation of Mount Garet active cone of and other small cinder cones in the SW part of the caldera has left a crescent-shaped caldera lake, Lake Letas. The symmetrical, flat-topped Mount Garet cone is topped by three active craters.

The Geophysical Institute of Peru (IGP) reports that the eruptive activity of the Sabancaya volcano remains at moderate levels, that is to say with the recording of an average of 40 daily explosions, with columns of ash and of gas up to 2.5 km altitude above the summit of the volcano and their subsequent dispersion. Therefore, for the following days, no significant change is expected in eruptive activity. 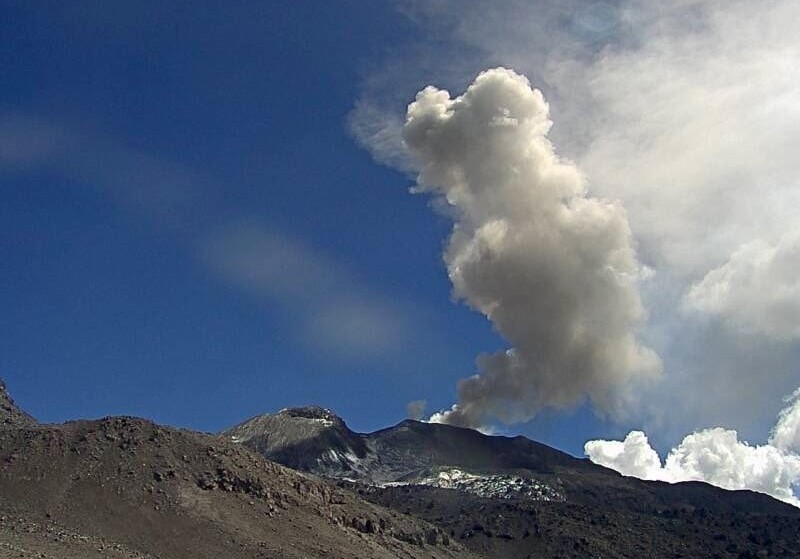 Monitoring the deformation of the volcanic structure using GNSS techniques (processed with fast orbits) does not show any significant anomalies. However, in general, an inflation process has been observed in the northern sector (surroundings of the Hualca Hualca volcano). Visual surveillance identified columns of gas and ash up to 2.5 km above the summit of the volcano, which were scattered towards the western, southeast and southern sectors of Sabancaya. Satellite recordings have identified the presence of 8 thermal anomalies, with a maximum value of 29 MW, associated with the presence of a lava body on the surface of the volcano’s crater.

In the light of the surveillance data, it is highlighted:
1) VOLCANOLOGICAL OBSERVATIONS: In this period a normal explosive activity of Strombolian type was observed. The total hourly frequency of explosions fluctuated between medium-low values ​​(7-9 events/h) with the sole exception of April 30 with medium values ​​(11 events/h). The intensity of the explosions was low in the area of ​​the North crater and variable from low to high in the area of ​​the Center-South crater.
2) SEISMOLOGY: The seismological parameters monitored do not show any significant variations.
3) SOIL DEFORMATIONS: The island’s soil deformation monitoring networks did not show any significant variation.
4) GEOCHEMISTRY: SO2 flux at a medium-low level
CO2 fluxes in the crater area show stable values ​​on average levels.
The C/S value in the plume is at medium levels.
The isotope ratio of helium shows high values ​​(data on April 26, 2022).
5) SATELLITE OBSERVATIONS: The thermal activity observed by satellite was at a low level. 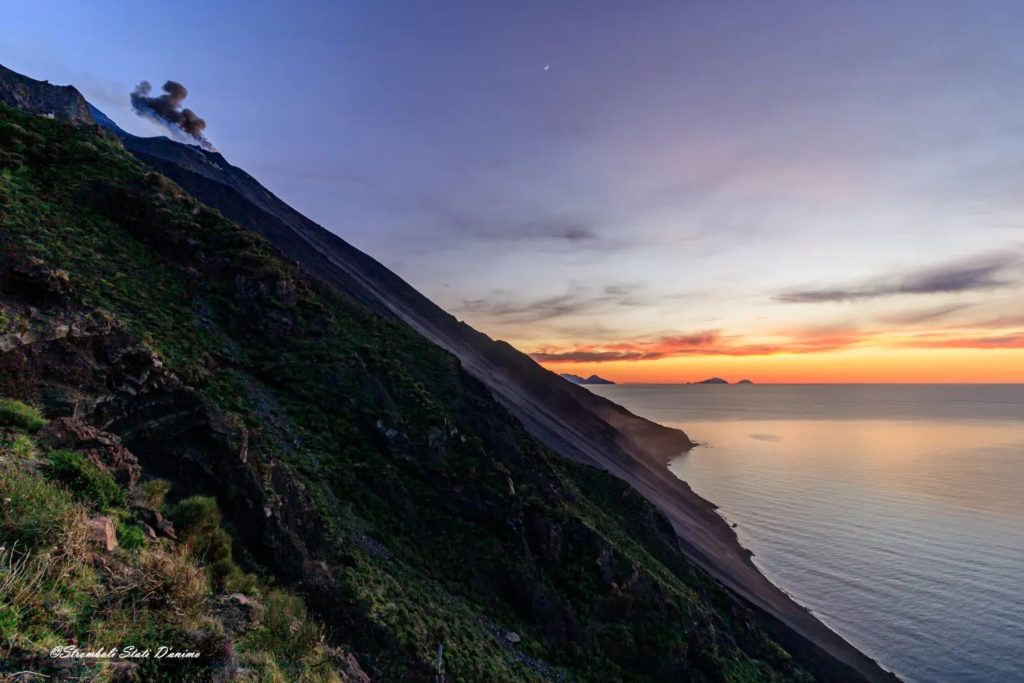 VOLCANOLOGICAL OBSERVATIONS
During the observation period, the eruptive activity of Stromboli was characterized through the analysis of images recorded by the INGV-OE surveillance cameras (altitude 190m, Punta Corvi, altitude 400m and Pizzo). The explosive activity was mainly produced by 3 (three) eruptive vents located in the North crater area and 2 (two) eruptive vents located in the Center-South crater area. All the mouths are located inside the depression which occupies the terrace of the crater.
Due to unfavorable weather conditions, the visibility of the crater terrace on April 26, 2022 was insufficient for a correct description of the eruptive activity.

After a magnitude 2.9 earthquake felt today which appears to have occurred at a depth of 9 km, there has been pressurization with a seismic swarm of several hundred earthquakes in the shape of a deep spasmodic tremor at a depth of about 8-10 km as in La Palma, announcing more pre-eruptive symptoms. We are still at LEVEL V4 and with already more than 30,000 recorded earthquakes. 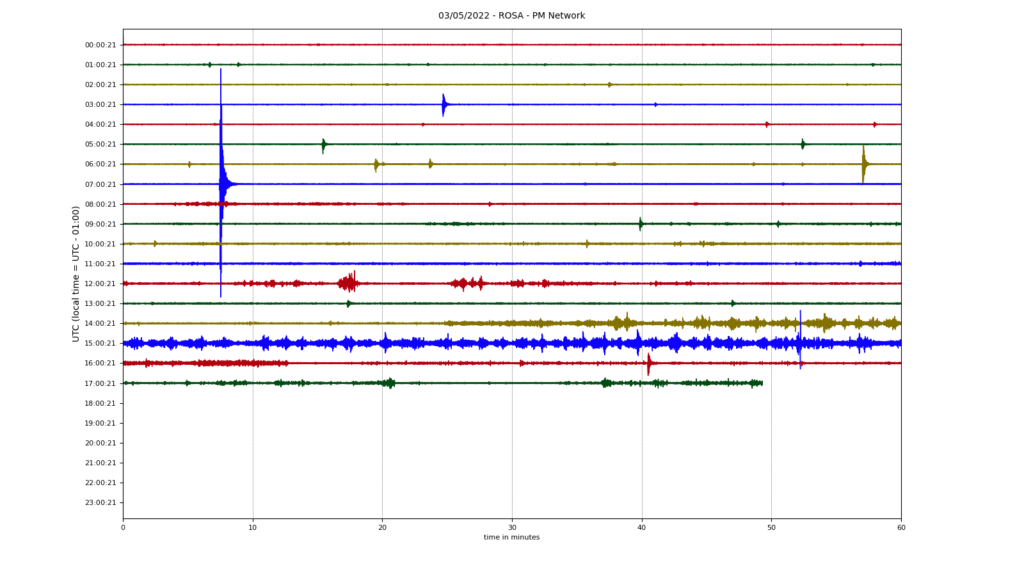 If we look at the accumulated released seismic energy, we see that after an initial release the process has been flat for almost a month, but it hasn’t stopped, it continues to release energy, it is still active and running and may stop or grow, but one clear thing is that it is there ready to manifest. Today is another preview. 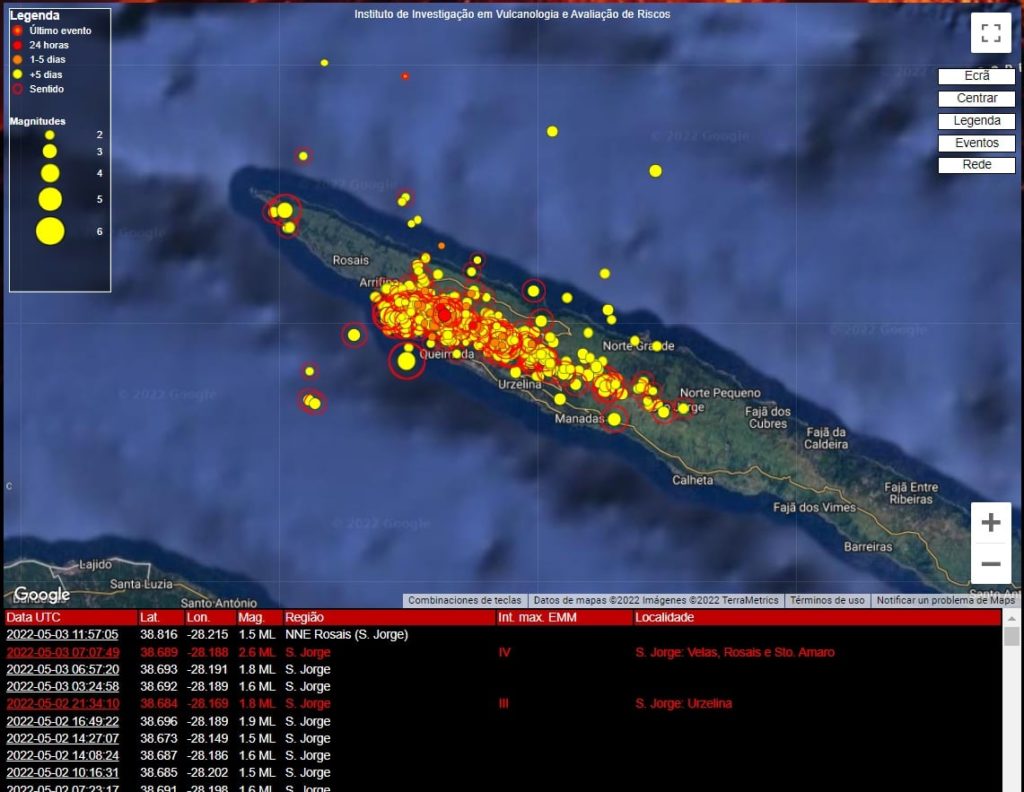 The seismic crisis is expected to increase with more intense and frequent earthquakes, with greater release of seismic energy before the eruption, and of course there will be one or more rupture events which will be followed by the appearance of tremor in 24-48h and of course the opening of an eruptive point or an eruption. 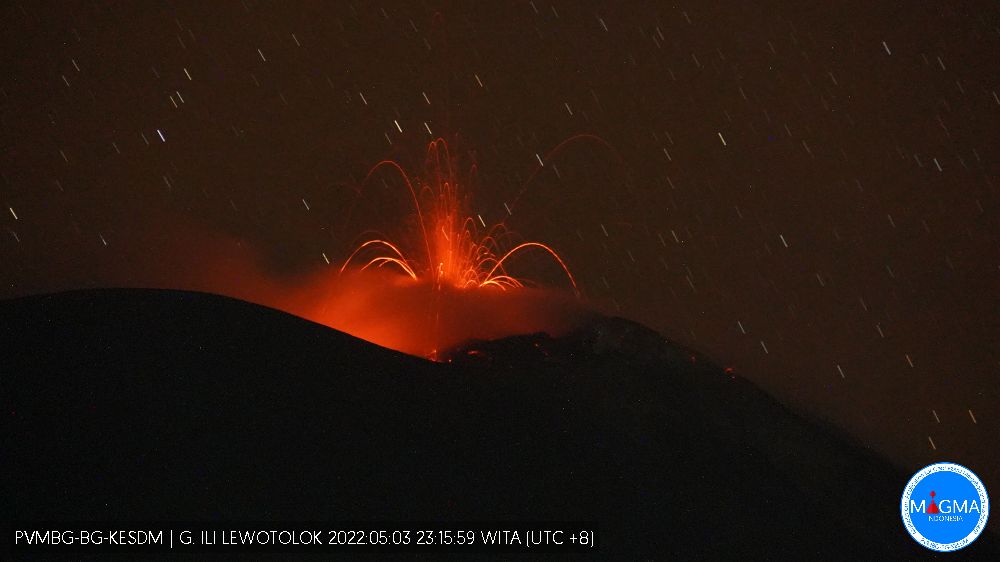 DAILY REPORT OF THE STATE OF THE REVENTADOR VOLCANO, Tuesday May 03, 2022.
Information Geophysical Institute – EPN. 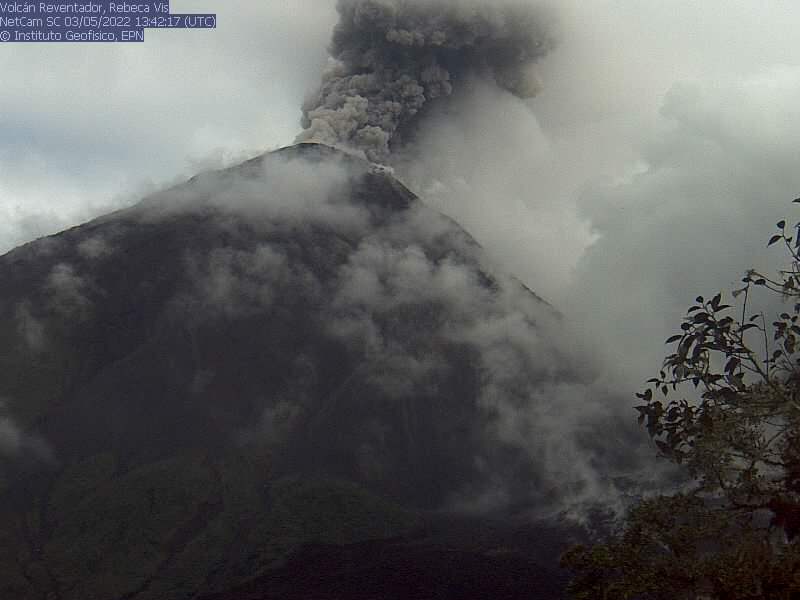 Rains / Lahars:
Rains were recorded in the area but no recording of lahars.

Emission / ash column:
The VAAC agency in Washington reported an emission of ash from a height of 688 meters above sea level in a westerly direction.

Observation:
Yesterday afternoon and night most of the time the volcano was cloudy. Today in the morning, the volcano was clear for a while and it was possible to observe an emission of gas and ash from a height greater than 600 m to the west

Around 1400 earthquakes were detected last week by the IMO’s SIL-seismic network. For the past three weeks detections have gone well over 100 earthquakes and is mostly due to increased earthquake activity in Reykjanes for the past weeks. Around 700 earthquakes have been manually reviewed by the natural hazard specialist on duty at the IMO during the past week. Earthquakes that have not yet been reviewed are mostly located near Þorbjörn and Elvörp on the Reykjanes peninsula. 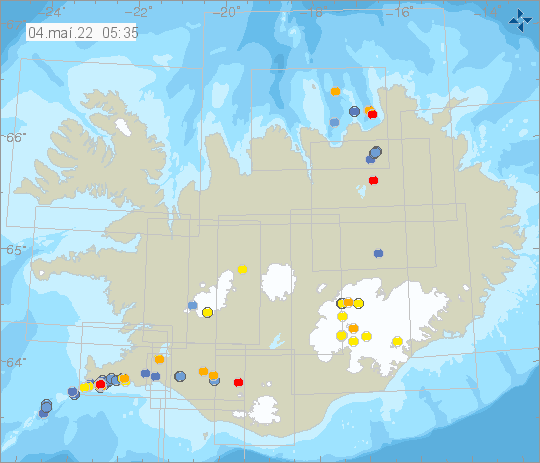 Most activity was distributed on the Reykjanes peninsula but was dense around Þorbjörn, Eldvörp, Sundhnjúkagígar and by Kleifarvatn and Trölladyngja. Other mentionable activity is seismic activity in Öxarfjörður and east of Grímsey, and by Herðubreiðartögl. The largest earthquake of the week was a M3.4 on the 30th of April in South Langjökull and it was felt in Haukadalur. One event was detected in Hekla during the week. Calm weather conditions last week can partly explain the large number of minor earthquakes detected in Reykjanes. 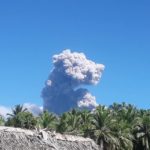 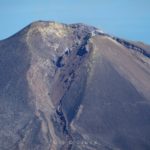