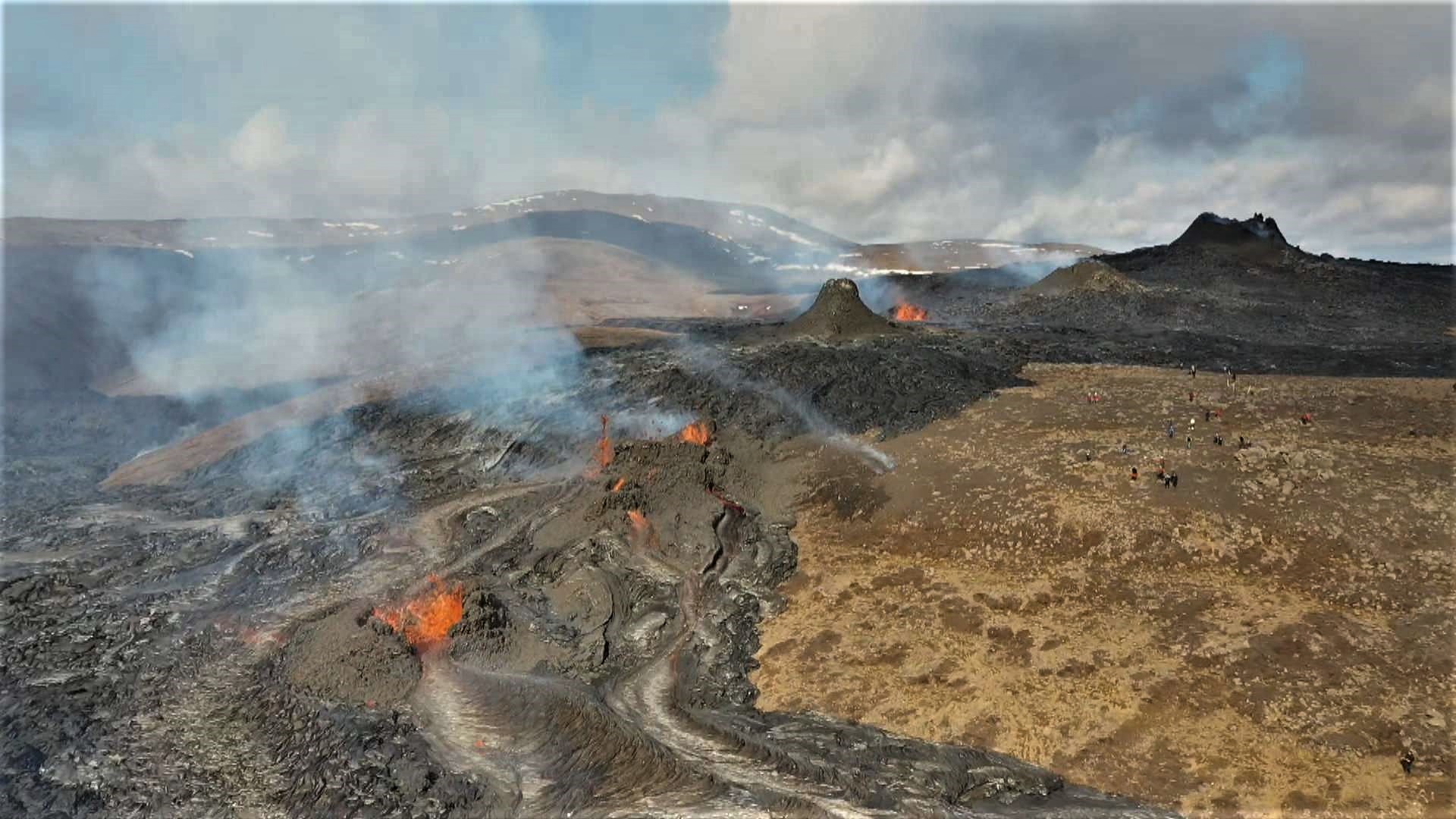 Other craters opened this morning at the Geldingadalur eruption sites. Volcanologist Þorvaldur Þórðarson says this is not surprising. « This is to be expected. Such a development is not abnormal and should not surprise us, » he said.
Ingibjörg Jónsdóttir, associate professor in the Department of Earth Sciences at the University of Iceland, was in the area when the craters opened. « It was amazing. » This opening we saw was in the existing lava field. It wasn’t like the area was opening up, but all of a sudden it started to bubble from there. « , she says. 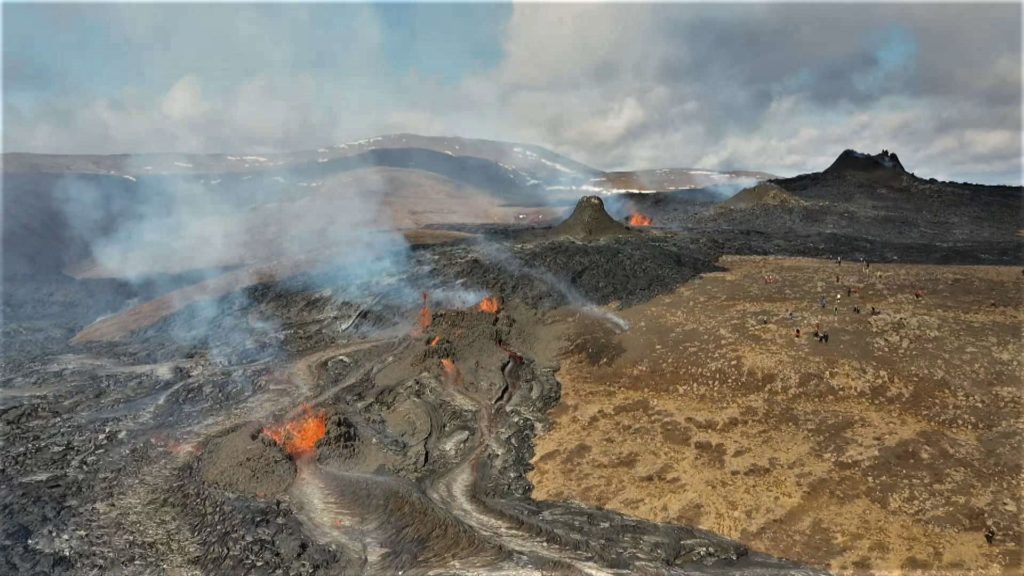 Drone footage showing the new craters
The new craters that have opened almost line up with the existing ones, which isn’t strange because beneath them is the magma chamber that scientists have been talking about in the news for the past few months. The RÚV cameraman Þór Ægisson took these photos by drones.

“Now there are three craters between the oldest craters in Geldingadalur and the fracture that is up there on the ridge, and then there is at least one crater between the two central craters on the ridge,” says Ingibjörg.

“The activity seems to have increased. We first noticed the new crater south of the ridge, then very quickly it became clear that they were two craters. Then we noticed a third which started shortly after on the other side of the ridge and just a few minutes ago a new one was discovered which is then the second oldest crater up there in Geldingadalur ”, explains Ingibjörg.

Lava from the new craters flows south and not into Meradali. “She walks into a lava field that got there in the very first few days and has been inactive ever since. It is now south of the oldest craters in Geldingadalur and is filling up quite quickly, ”she says.

In the light of surveillance data, it is highlighted:
1) VOLCANOLOGICAL OBSERVATIONS: Strombolian activity within the crater at the Northeast Crater. Thermal anomalies recorded by satellite, probably due to deep explosive activity in the crater of Bocca Nuova and hot fumaroles in the area of the summit of the Southeast Crater. Degassing activity at the Voragine crater.
2) SEISMOLOGY: Weak seismic activity of fracturing; average amplitude of the volcanic tremor mainly in the low level.
3) INFRASON: moderate infrasound activity. 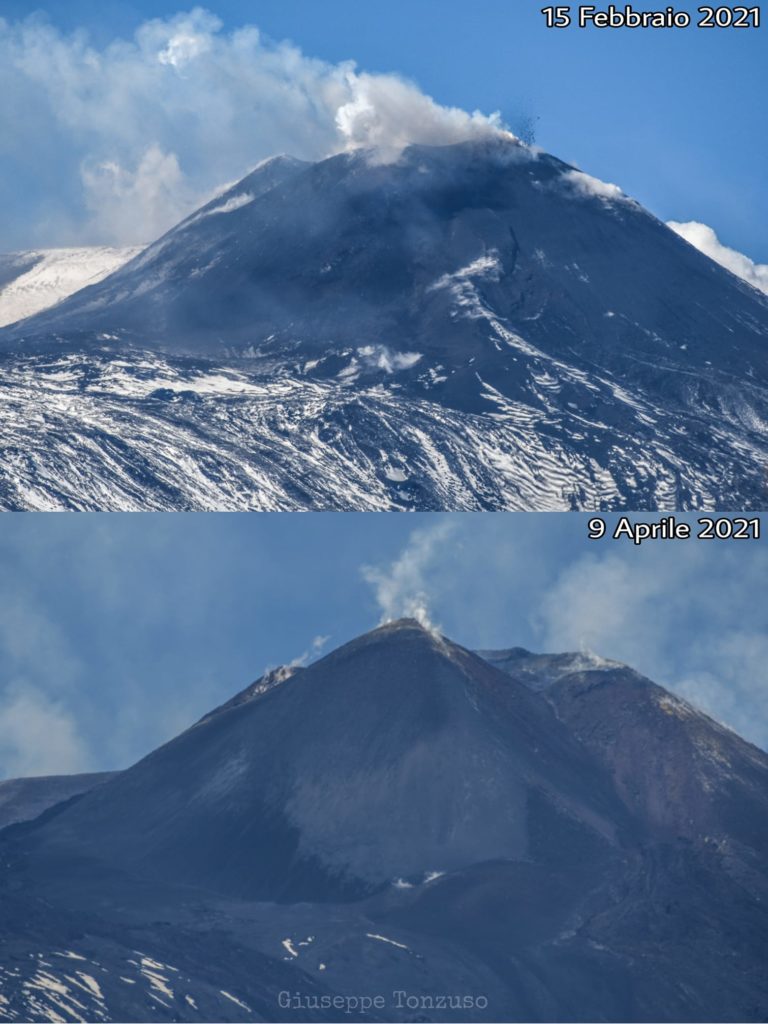 Comparison that shows how the Southeast crater has changed (and not a little) its morphology, following the seventeen paroxysms of the sequence which began on February 16, 2021. The first photo was taken on February 15 (the next day, we had the first paroxysm of the aforementioned crater), while the second was taken just today.
Both photos were taken from Lavinaio.

4) DEFORMATIONS: There are no significant variations in the time series of soil deformation monitoring networks.
5) GEOCHEMISTRY: The flow of SO2 at an average level
HCl flux is at a low level.
The CO2 flux from the soil remains at medium-low values.
The partial pressure of dissolved CO2 in groundwater is at low values.
No new data from the C / S ratio is available.
Helium isotopic ratio values ​​show a slight decrease but are still high (last update 04/01/2021).
6) SATELLITE OBSERVATIONS: The thermal activity in the summit area is at a low level.

During the week, the monitoring of the volcanic activity at the level of the summit craters of Etna was carried out by analyzing the images of the network of surveillance cameras of the INGV Section of Catania, Osservatorio Etneo (INGV-OE) and images acquired by the Sentinel 2 satellite, April 9 cm Due to the presence of cloud cover on certain days of the week, the observations of volcanic activity by the cameras were discontinuous. 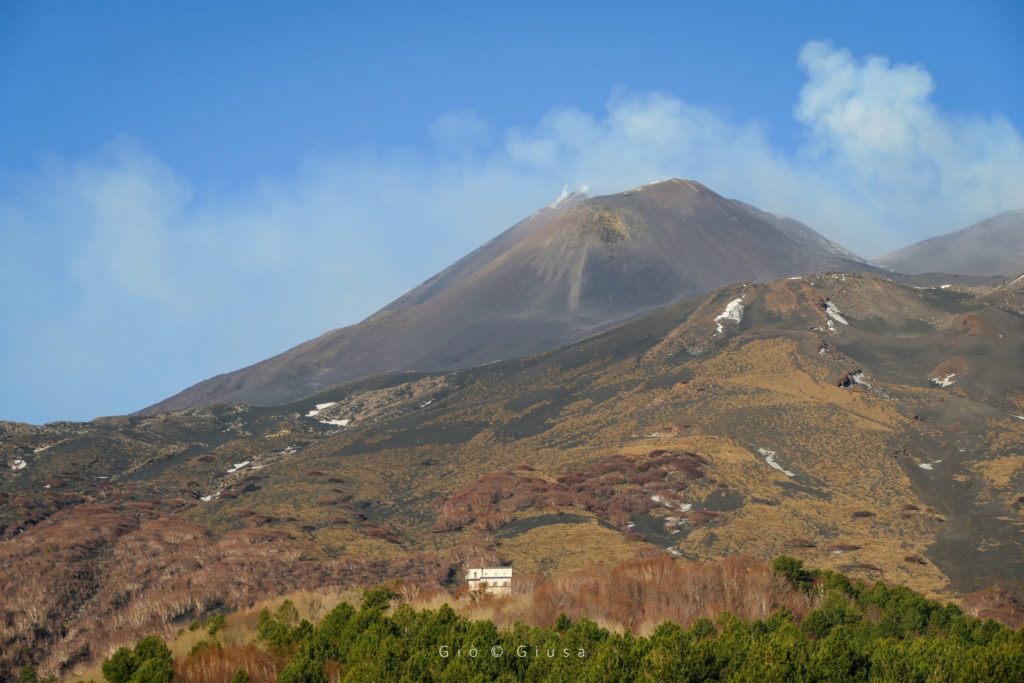 After the conclusion of the last paroxysmal episode of April 1, the Southeast Crater (SEC) was no longer producing explosive activity visible with cameras. Images acquired on April 9. from the Sentinel 2 satellite, showed a high thermal anomaly zone affecting the summit area, probably caused by the system of hot fumaroles located around the active vents during the last paroxysm. The intense fumarolic activity in this area is clearly visible on the camera images.
During the period under review, the Northeast Crater (NEC) produced intense degassing and intracrater Strombolian activity with the launching of coarse materials at heights that sometimes exceeded the edge of the crater by a few tens of meters. The explosions were accompanied by the emission of ash which was diluted in the air, dispersed in the direction of the prevailing winds.
The crater of Bocca Nuova (BN) was affected by pulsed degassing.
Images acquired by the Sentinel 2 satellite on April 9. exhibited a significant thermal anomaly in correspondence with the various bottom openings already described in the previous press release. This anomaly is probably caused by a deep Strombolian activity, not observed through the images of the cameras of the surveillance system.
Finally, the Voragine crater (VOR) was affected by degassing activities.

The eruption that started on 04/09/2021 at 7 p.m. (appearance of the tremor) continues. The intensity of the volcanic tremor (indicator of the intensity of the eruption) is always very fluctuating. These fluctuations can be linked either to:
– the cone under construction which undergoes construction and dismantling phases, thus influencing the speed of the lava flows at the level of the vent;
– or to punctual releases of pockets of gas trapped in the supply ducts which can be released suddenly causing an increase in the tremor with a certain periodicity. 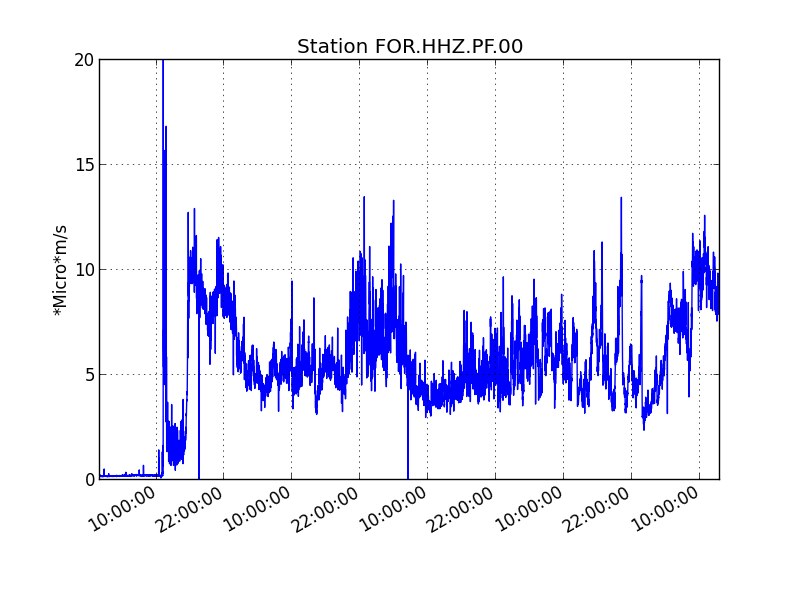 Over the last 24 hours, 36 superficial volcano-tectonic earthquakes (between sea level and the surface) have been recorded under the summit craters.

Observations of the eruptive site still show two eruptive vents, a main and a secondary of lower activity slightly downstream from which two regimes of lava fountains escape. The height of the lava fountains emitted by the main mouth was today between 20 and 40 meters depending on the periods of activity. 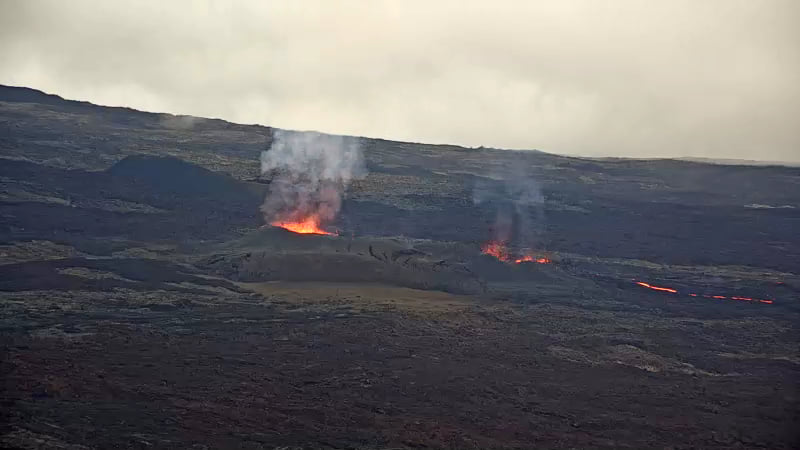 Since April 11, an increase in SO2 flows has been recorded on the NOVAC stations of the OVPF-IPGP; the highest values were recorded today (April 13) with values reaching 8 ktonnes / day, corresponding to flow rates> 30m3 / sec for non-degassed magmas.
Analysis of the NOVAC data shows that the plume reached an altitude of between 2,500 and 3,500m above sea level. 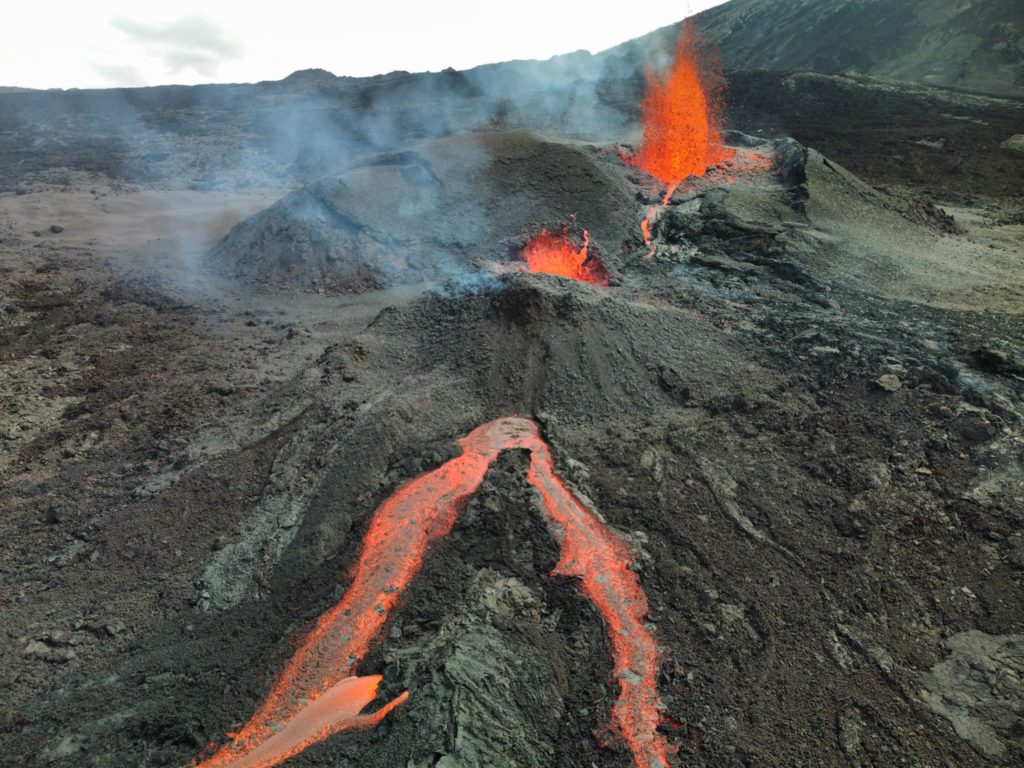 The surface flows estimated from satellite data via the HOTVOLC platform (OPGC – Clermont Auvergne University) remain very disturbed by the cloud cover on the eruptive site with values between 8 and 30 m3 / s since the start of the eruption .

NOTE: This update was prepared prior to an explosion which occurred at 6:30AM local time. 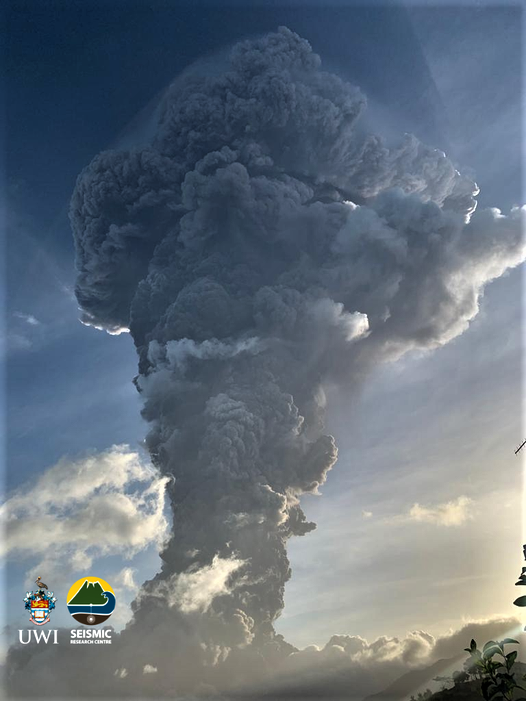 – Audible venting was heard associated with some periods of tremor and long-period earthquake activity.
-The volcano continues to erupt explosively and has now begun to generate pyroclastic density currents – hot (200°C-700°C), ground-hugging flows of ash and debris.
– Explosions and accompanying ashfall, of similar or larger magnitude, are likely to continue to occur over the next few days impacting St. Vincent and neighbouring islands.
– The volcano is at alert level Red 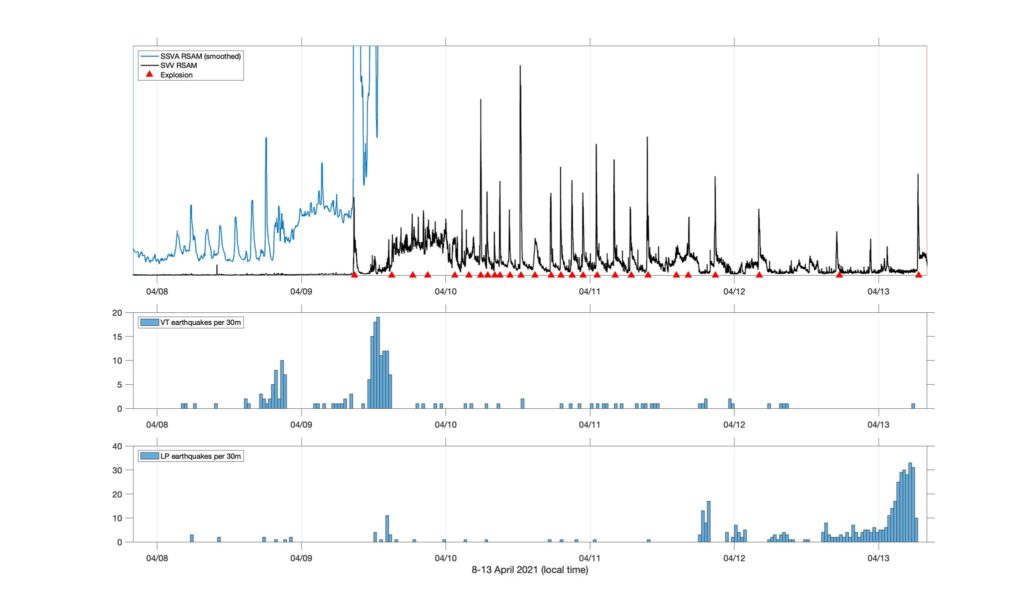 This plot summarizes the seismic data recorded during the eruption of La Soufrière, St Vincent since 8 April, 2021. The top panel shows the Real-Time Seismic Amplitude Measurement (RSAM) data from two seismic stations, SSVA and SVV (SSVA is closer to the crater). RSAM measures the seismic energy every minute. The SSVA RSAM shows the banded tremor that started on 8 April and the continuous tremor prior to the first explosion. The times of the explosions (red triangles) in this plot were determined from satellite imagery by colleagues at the University of East Anglia, Prof. Jenni Barclay and Prof. Ian Renfrew. SSVA stopped transmitting data shortly after this, probably destroyed by the explosion. The SVV RSAM clearly shows the high-amplitude tremor generated during the subsequent series of explosions.
The bottom two panels show the numbers of volcano-tectonic (VT) and long-period (LP) earthquakes detected by the seismic network. VT earthquakes are associated with rock cracking under pressure and LPs are associated with the movement of magma. The second explosion was preceded by a swarm of VT earthquakes. LP earthquakes have become more evident since late on 11 April and increased in their intensity before the explosion on 13 April.

– Seismic activity changed with the explosive activity at 6:30 am on 13 April. Prior to the explosion, long-period (LP) earthquakes had been increasing in number.
– Categorized as a Vulcanian explosion, it was accompanied by larger seismic tremor which was followed by over three hours of smaller continuous seismic tremor.
– Vulcanian explosions are small to moderate explosive eruptions, lasting seconds to minutes. Ash columns can be up to 20 km in height and pyroclastic density currents (PDCs) can be generated.
– The explosions pulsed for ~30 minutes and produced PDCs that reached the sea at the mouth of the Wallibou approximately 6 km from the volcano.
-. Once this tremor had died down, LP earthquakes were recorded, again slowly growing in numbers. but are significantly smaller than those prior to the 6:30 am explosion. 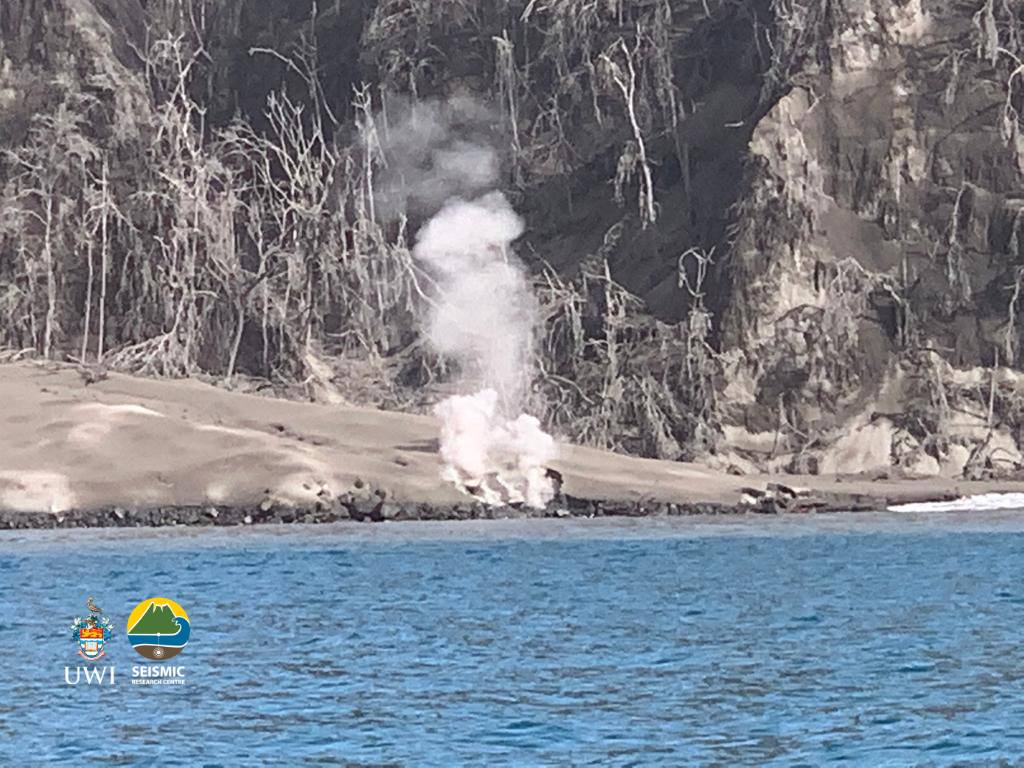 13April. Recon after the 6:30am Vulcanian explosion showed evidence of pyroclastic density currents (PDCs) in every valley. PDCS are a hot fast-moving mixture of fragmented rock, ash and gases. Here one can still be seen steaming

– Eyewitness account of this flow indicated that it had extended further into the sea when it reached the coastline.
– Observations made this afternoon from the coastline indicate that PDCs resulting from this morning and have reached the sea in every valley extending from Larikai to Wallibou.
– The volcano continues to erupt explosively and has now begun to generate pyroclastic density currents. Explosions and accompanying ashfall, of similar or larger magnitude, are likely to continue to occur over the next few days.

The Geophysical Institute of Peru (IGP) reports that the eruptive activity of the Sabancaya volcano remains at moderate levels, that is to say with the recording of an average of 100 daily explosions, with columns of ash and gas up to 2 km altitude above the summit of the volcano and their consequent dispersion. Therefore, for the following days, no significant change is expected in eruptive activity.

The IGP recorded and analyzed the occurrence of 1783 earthquakes of volcanic origin, associated with the circulation of magmatic fluids inside the Sabancaya volcano. An average of 100 explosions was recorded daily. During this period, Volcano-Tectonic (VT) earthquakes associated with rock fracturing were located mainly in the North-West and North-East of Sabancaya and presented magnitudes between M2.4 and M3.9

The monitoring of the deformation of the volcanic structure using GNSS techniques (processed with fast orbits) does not present any significant anomalies. However, in general, an inflation process was observed in the northern sector (around the Hualca Hualca volcano). Visual surveillance made it possible to identify columns of gas and ash up to 2 km altitude above the summit of the volcano, which were scattered towards the southwest, west, north and northeast sectors of Sabancaya. Satellite recordings have identified the presence of 3 thermal anomalies (maximum value of 43 MW) associated with the presence of a lava body on the surface of the volcano’s crater. 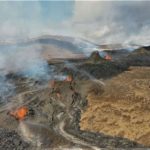 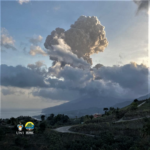