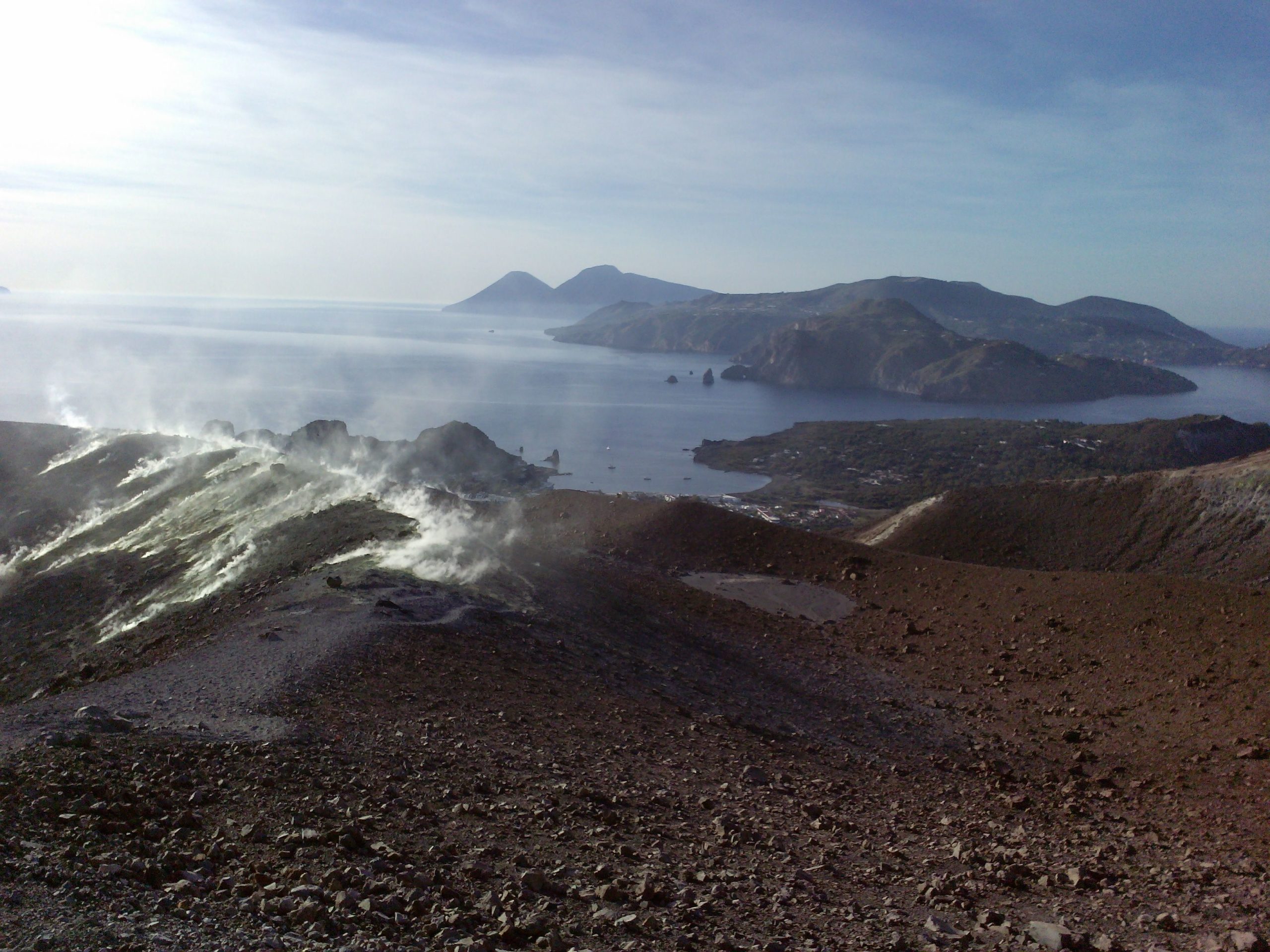 Since the last declaration, 66 earthquakes have been located in the area affected by the volcanic reactivation of Cumbre Vieja. Of these, 6 were felt by the population, the maximum intensity being in epicentral zone III (EMS98). The earthquake of greater magnitude occurred at 3:22 a.m. on the 13th, with a value of 3.9 mbLg at a depth of 37 km. The total number of localized earthquakes has fallen sharply.

Among the earthquakes located since the last communication, 5 are located at depths greater than 30 km, the rest of the hypocenters are located at a shallower depth, about 12 km.
The volcanic tremor signal maintains a high average amplitude, with no intensifying pulses since the last statement.

The height of the eruptive column measured at 6.30 UTC is 3000 m.
The island’s network of permanent GNSS stations shows stability at stations close to eruptive centers.

More than 50 earthquakes rocked La Palma this morning, the largest at magnitude 4.1, according to the National Geographic Institute (IGN). This 4.4 earthquake in Mazo, at a depth of 36 kilometers, became the largest of those recorded since the start of the seismic swarm that preceded the eruption of the volcano of La Palma. 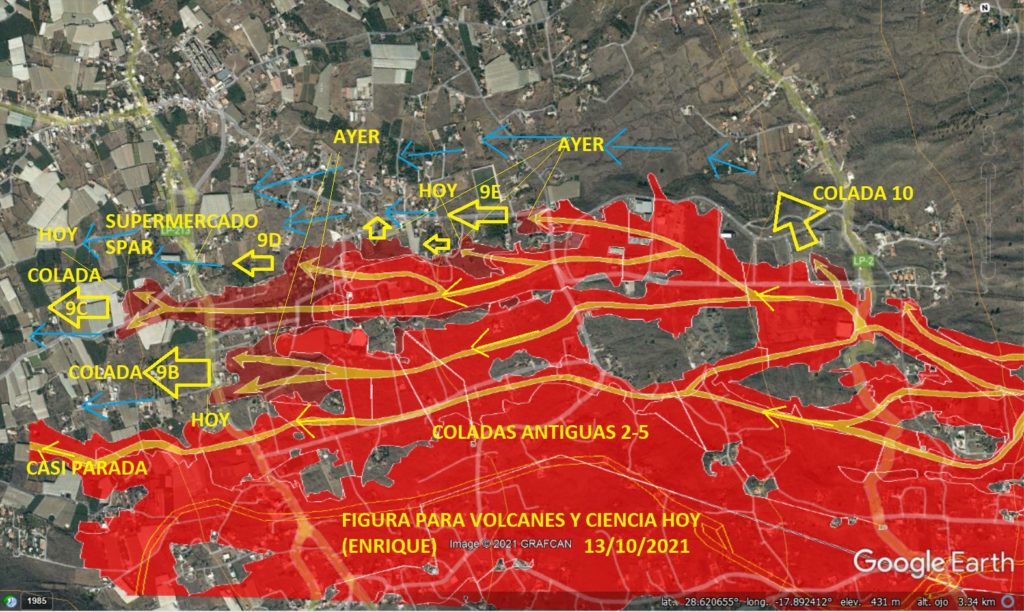 The advance of the lava flow that extends further northwest forced the authorities to order Wednesday evening the evacuation of a new area in the municipality of Los Llanos de Aridane, a decision that affects around 15 residents who had stayed at home. The new exclusion zone is an easterly extension of Tuesday’s, which forced the eviction of around 800 residents. More precisely, it is the area to the south of the Camino de la Cruz Chica at the junction with the Camino de Los Campitos, following camino Morro Cabrito until reaching the LP-2 road, as reported this evening by the government of the Canary Islands.

Residents had until 00:00 to leave their homes, with their belongings and pets, and go to the meeting point in Campo de Lucha Camino León de los Llanos de Aridane.

This northwest arm is the same one that crossed the small industrial area of ​​Callejón de La Gata and which motivated the evacuation of the inhabitants to new areas of La Laguna yesterday. El Pevolca had announced on Wednesday that this language was advancing very slowly and losing power.

In view of the monitoring data, it should be noted that:
1) GEOCHEMISTRY:
Temperature of the fumaroles of the crater: no significant variation in the internal slope of La Fossa while the upward trend continues on the edge;
CO2 flux in the crater area: slightly lower but with high degassing levels;
SO2 flux in the crater area: at high levels;
Geochemistry of fumarolic gases: the last sample of October 15, 2021 indicated high levels of magmatic gases in the fumaroles of the crater;
CO2 flux at the base of the La Fossa cone and in the Vulcano Porto area: constantly high in the Grotta dei Palizzi area and increasing on the sites of Camping Sicilia and at the base of Forgia Vecchia (Rimessa site); in the other sites no significant variation is observed;
Geochemistry of thermal aquifers: the upward trend continues, although slightly down, in the water temperature on the Sicilia Campsite site while the conductivity values ​​are down slightly; no significant changes on the other monitored sites. 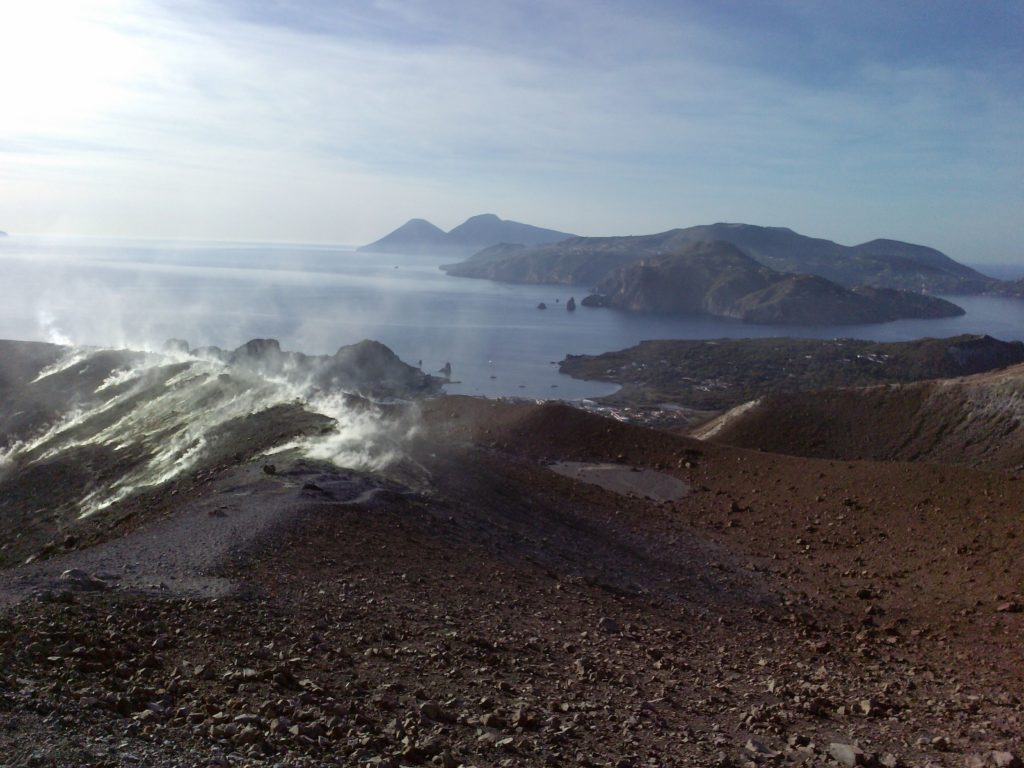 2) GEOPHYSICS:
Local seismicity: modest decrease in the rate of occurrence of events with a frequency between 1 and 30 Hz. No significant change in low frequency (<1 Hz) seismicity, which remains at high values.
Regional seismicity: no fracturing event during the week considered.
Deformations: the acceleration phase of radial expansion remains centered in the area of the Fossa crater; also the uplift observed at the IVCR station confirms the upward trend;
Inclinometry: the inclinometric network shows the continuation of the uplift phase of the La Fossa cone area which began on September 13, 2021. 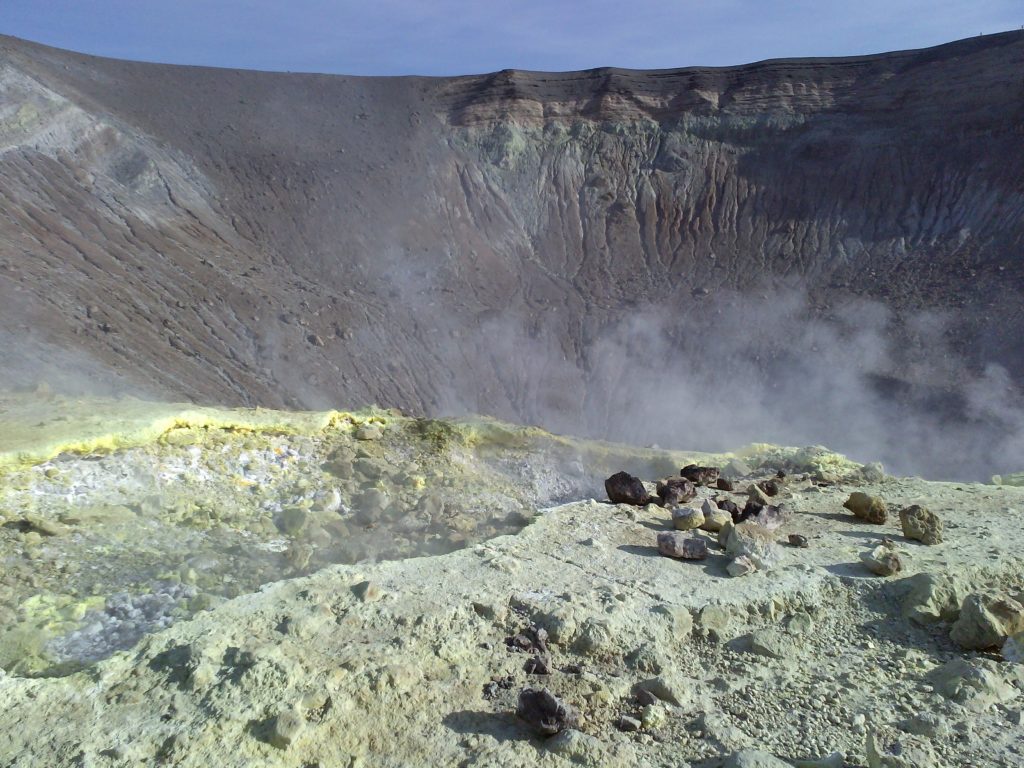 2. EXPECTED SCENARIOS
The possible phenomena expected in the short / medium term are listed below:
– continued increase in fumarolic and diffuse degassing;
– increases in the temperature of the gases and their flow rates, with variations in the thermal layer;
– increase in seismicity linked to hydrothermal activity and the appearance of volcano-tectonic seismicity;
– increase in deformations;
– slope movements;
– impulsive explosive phenomena such as phreatic explosions which can occur suddenly. 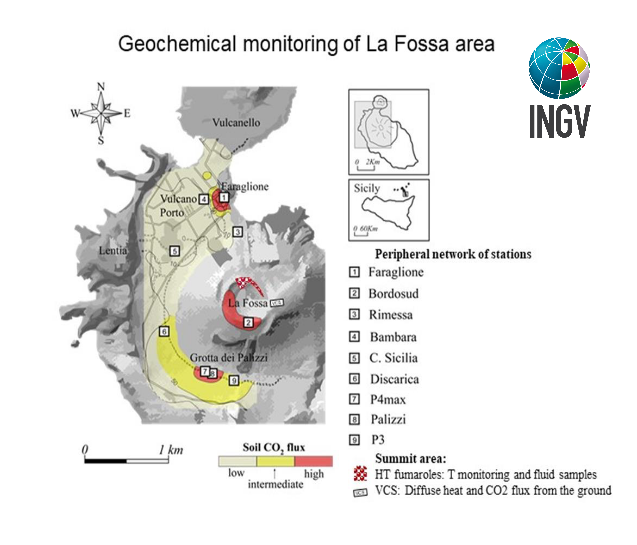 3. GEOCHEMISTRY
Fumarole temperatures and heat flows in the crater area: the temperature of the fumarole emissions recorded on the edge of the La Fossa crater shows great fluctuations, mainly due to the heavy and frequent rains of the last days; the last undisturbed data indicated increasing values ​​(daily average 320 ° C); on the inner flank of the crater of La Fossa the temperatures recorded on the FA site show rather stationary values ​​and are around 108 ° C. An extraordinary maintenance intervention will be carried out as soon as the safety conditions of the crater allow it, in order to restore the acquisition of all the temperature signals.

JMA reported that incandescence from Minamidake Crater (at Aira Caldera’s Sakurajima volcano) was visible at night during 4-11 October. The sulfur dioxide emission rate was 400 tons per day on 5 October. An explosion at 0517 on 8 October ejected material 600-900 m away from the crater and produced an eruption plume that was obscured by weather clouds. The Alert Level remained at 3 (on a 5-level scale), and residents were warned to stay 2 km away from the crater. 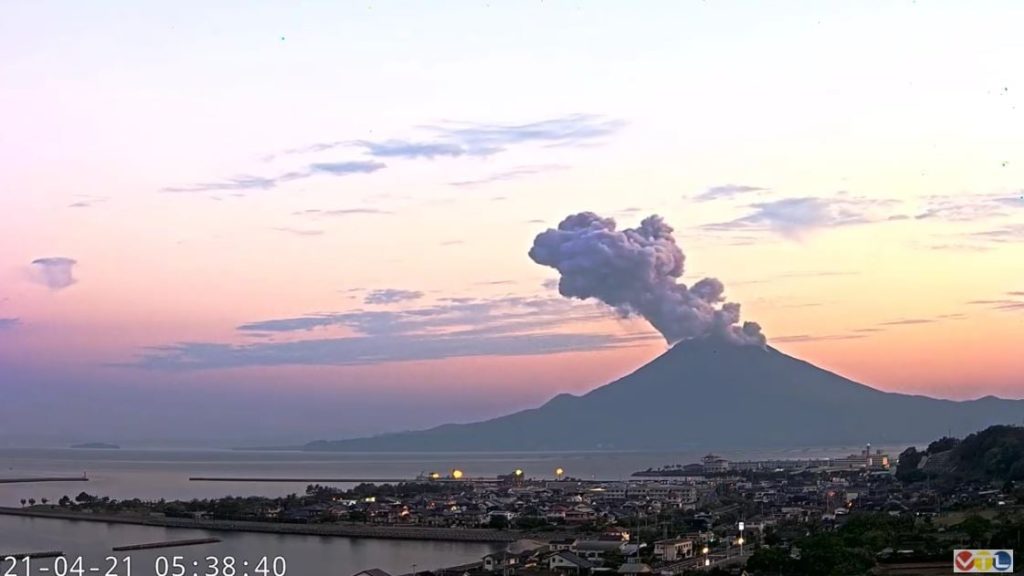 Weekly activity bulletin of the Nevado del Ruiz volcano
The activity level continues at: Yellow activity level or (III): Changes in the behavior of volcanic activity.

During the last week, according to the results obtained from the monitoring of volcanic activity through the various parameters evaluated, the Nevado del Ruiz volcano continued to show instability in its behavior.
The seismicity generated by rock fracturing has decreased in number of earthquakes and in seismic energy released, compared to the previous week. This seismic activity was located mainly in the Arenas crater and the South-South-West, West-South-West and East-South-East sectors of the volcano. The depths of the earthquakes ranged from 0.7 to 6.9 km. The highest magnitude recorded during the week was 0.9 ML (Local Magnitude), corresponding to the earthquake that occurred on October 8 at 3:53 p.m. local time, located 2.7 km to the South-South -West of the Arenas crater, at a depth of 2.8 km. 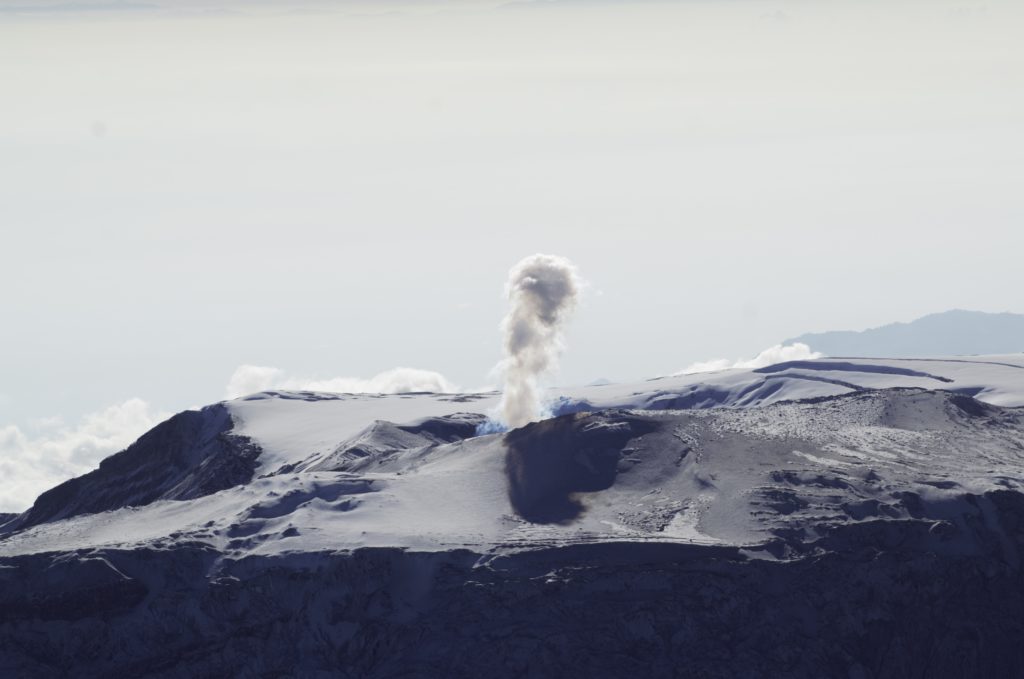 There were several episodes of low energy drumbeat type seismicity associated with the fracturing of the rock on October 5 and 11. This seismicity has been linked to the processes of ascension, localization-growth and evolution. of a lava dome at the bottom of the Arenas crater.
Seismicity related to fluid dynamics inside volcanic conduits has increased slightly in the number of recorded earthquakes and in released seismic energy, compared to the previous week. This type of seismicity was characterized by the recording of continuous volcanic tremors of low energy and pulses of tremor, earthquakes of long type and very long period with varying energy levels. Some of these signals were associated with gas and ash emissions confirmed by cameras installed in the volcano area and by reports from PNNN officials.

Seismic statistics are not available for today due to persistent data transmission problems from the Sangay volcano reference station.

Rains / Lahars:
There was no rain in the area. ** In the event of heavy rains, they could re-mobilize the accumulated material, generating mudslides and debris that would descend the sides of the volcano and flow into the adjacent rivers. 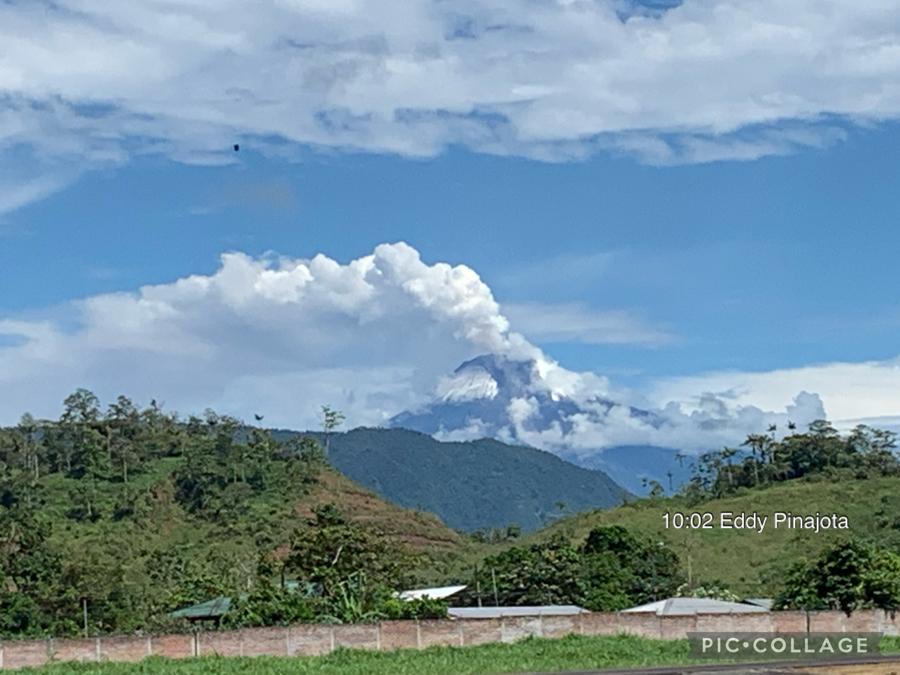 Emission column / ash:
In the images shared by the staff of the Geophysical Institute who are on the ground, several gas emissions were observed which reached heights of up to 1,500 meters above the crater level, the direction of these emissions was constant towards the West. the VAAC recorded 3 ash emission alerts observed by the satellites which reached heights of 900 and 1200 meters above the crater level, the directions of these emissions went from southwest to west.

Other monitoring parameters:
FIRMS reported 2 thermal alerts over Sangay volcano in the past 24 hours.

Observation:
Today in the morning on images shared by the staff of the Geophysical Institute which is in Macas in the process of installing a new station on the Sangay volcano, the volcano was observed clear allowing the emissions to be visualized. previously described, the rest of the time the cloudiness was permanent in the area. 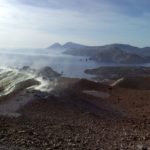 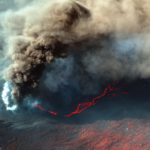